U.S. has few ways to track exactly where weapons it sent to Ukraine end up, Pentagon tells CNN.

The US Department of Defense fears the risk that in the long term some of the weapons "may end up in the hands of other armed forces and militias that the US did not intend to arm."

ac
@RobbieMac592
·
52m
Replying to
@PelmeniPusha
Those weapons are being funneled to all sorts of far-right groups in Europe and sold on black market to foreign agents. The USA’s foreign policy is always short-sighted. There WILL be blowback.

I think the Ukrops want to turn Azovstal into another Donestk airport propaganda battle, which they considered somehow a victory. Best to let the DNR and RF handle it as they see fit.

I wonder which civilians he is talking about?

Is ne saying all civilians gone? So Russia can bomb to its heart's content?

OSINT Aggregator
@AggregateOsint
·
2h
Statement released by the #Azov Deputy Commander shortly after the civilians left: “We will fight, we will use every cartridge we have left, but we call on the homeland to save civilians, the wounded and take away the bodies” - Kalina, Deputy Commander of the Azov Regiment
mnztr 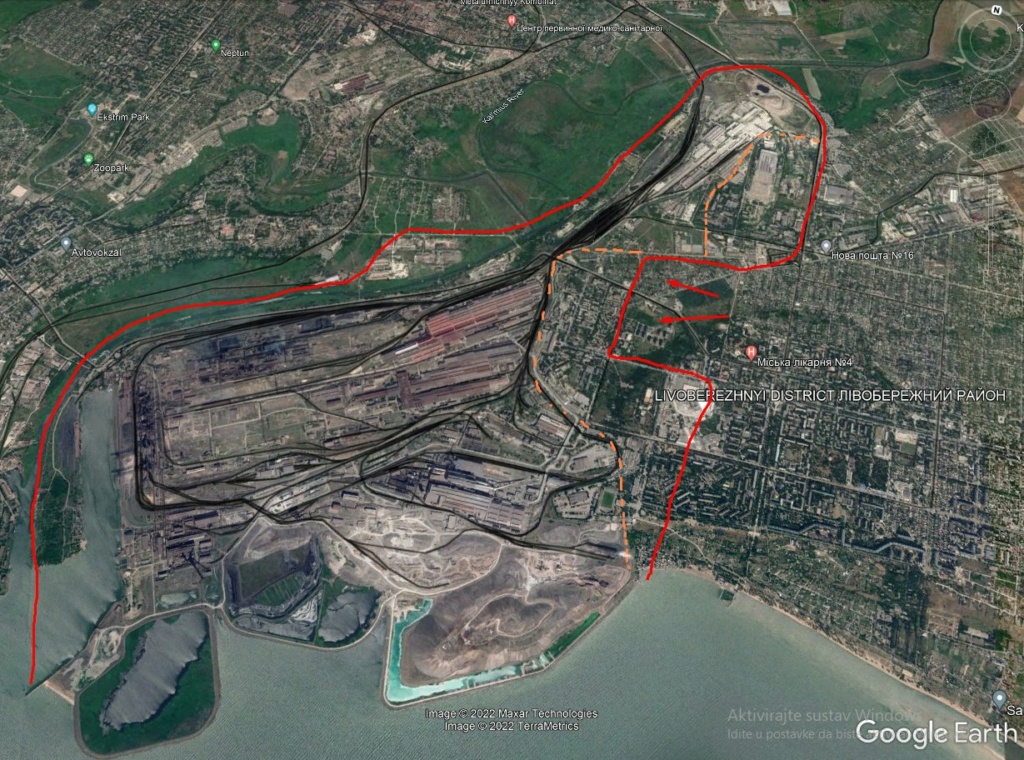 Some gains were made today 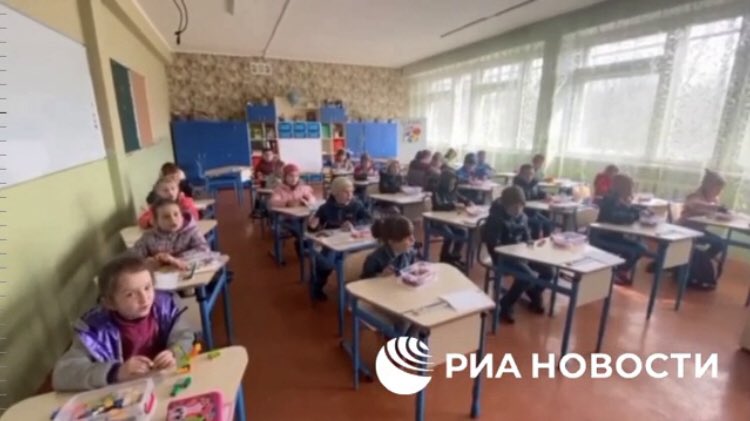 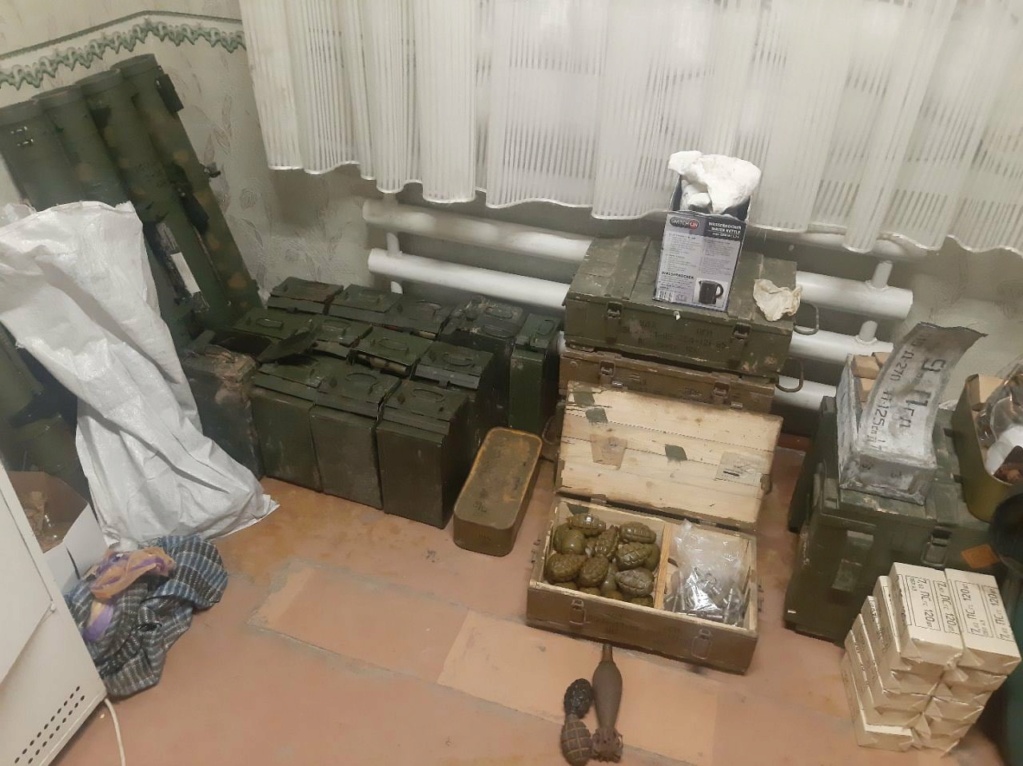 Who the **** put the explosives rignt next to the radiator ?

Some gains were made today

Who the **** put the explosives rignt next to the radiator ?

Singular_Transform wrote:No bunker ever been designed to withstand well equipped enemies standing on the top of it.


The vents/ holes could be filled up with liquid explosive, like the ones used in the mines, and one by one blown up.

The pressure waves will clean out the tunels, killing everyone, and don't forget, every kg of explosive will generate one cubic meter of poisonous gas.

This was the strategy of the USA in the Pacific theatre.


Just fill up the bunker access tunels with cheap liquid explosive, and detonate it.


I saw a video, but I can't locate it any more.

This is a mine equipment, just to be clear how simple the process is :
https://www.youtube.com/watch?v=GblJ8Er70T0

No need for anything too special. Propane and oxygen will be quite effective. run the hoses, stand well clear and start the pumps. You can even tell the nazis what's happening and that if they so much as cause a spark they will be in hades. Even if you pump pure oxygen in there, things become extremely dangerous.
mnztr

Is there any data that would help us assess how Russia has done with interdiction? This is so incredibly important IMHO, if there is any hope of finishing this war soon. If they cannot stop resupply, then the US can keep sending weapons in for years. I am still puzzled why rail links and bridges to the west are not yet blown. Also I saw a video of a helo gunship hovering over a convoy...like a sitting duck. I was just waiting for it to get blown out of the sky, but it did not happen. The only way is they need to move forward fast, then circle back, but keep moving fast and low.

Does Russia have the air defense capabilities in Kherson to bring this down?

Edit: Based on the dashboard position at 0:12, this is about 20km from Russian positions in Kherson.

Does Russia have the air defense capabilities in Kherson to bring this down?

Edit: Based on the dashboard position at 0:12, this is about 20km from Russian positions in Kherson.

It would surprise me if they don't at least have MANPADS, but maybe they have become cocky. Surely they have a Pantsir vehicle somewhere to shoot it down. More importantly, they need to see where its based.

Kherson itself seems problematic against very low flying aircraft. This is example of possible Pantsyr coverage. 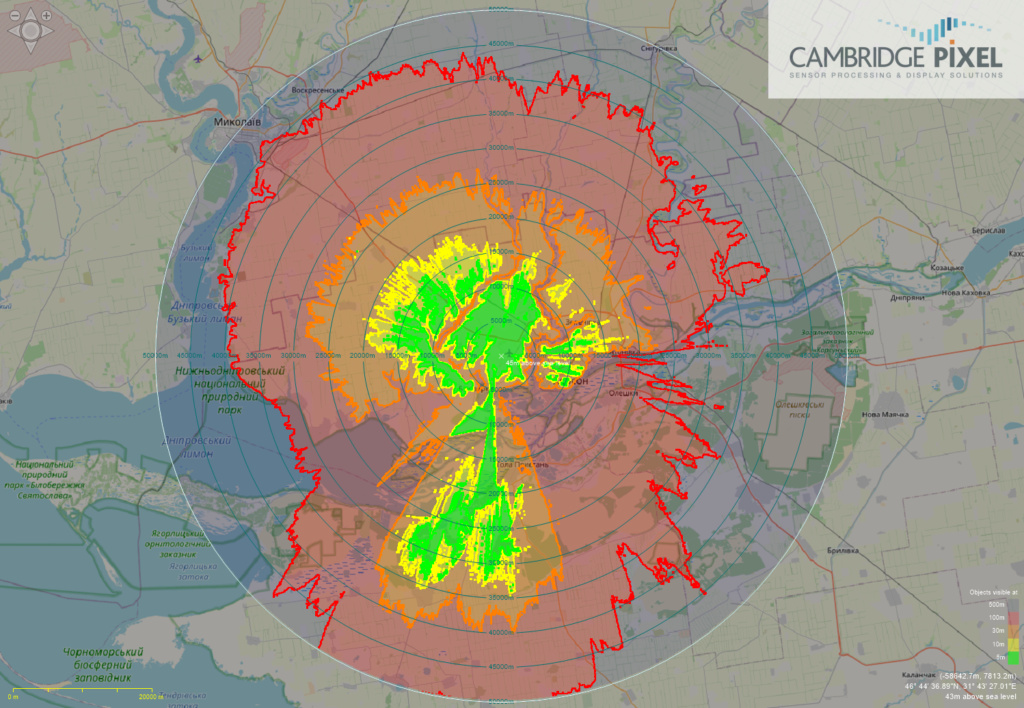 If the Helicopter can fly 5 meters above ground level, there will be considerable amount of gaps it can make use, possible detection range is 10 km, but patchy.  Situation would improve if the helo flies at 30 m or more. But Ukraine might try to fly as low as possible. This would probably force Russia to put considerable amount of men with Manpads.  Still the best medicine would be Air patrol with Kamovs or aircrafts.

Or pre-empt by deleting those helicopters with artilleries, bombing or kalibrs.

ac
@RobbieMac592
·
52m
Replying to
@PelmeniPusha
Those weapons are being funneled to all sorts of far-right groups in Europe and sold on black market to foreign agents. The USA’s foreign policy is always short-sighted. There WILL be blowback.[/i]

Yeah, reminds me of my highschool days just after Bosnian War finished and suddenly there was so much ordnance around that we had hand grenades going off in nightclubs over bitches, mobsters using RPGs to send a message to businesses who forget to pay protection money (trust me, you need protection from RPG) and weddings with 45 Kalashnikov salute on full auto Afghan style only with way more alcohol and less considerations for safety

Even way over in Sweden which used to be quiet before then they suddenly had gangsters from Balkans throwing​ hand grenades like they are firecrackers (why hassle with guns when you can cover more ground with grenades?)

Both Ukrainian warships with the name Donbass have been sunk in Mariopol port.

I posted photos of the command ship Donbass a few days ago.

This Donbass is a patrol boat (Stenka class) belonging to the Ukrainian coast guard. 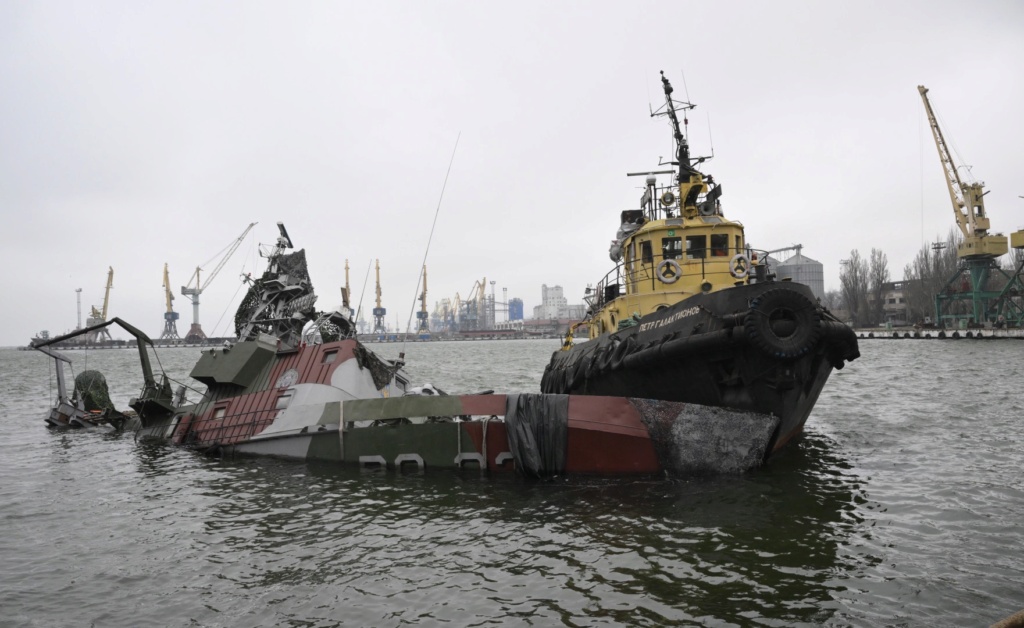 Krepost wrote:Both Ukrainian warships with the name Donbass have been sunk in Mariopol port.

I posted photos of the command ship Donbass a few days ago.

This Donbass is a patrol boat (Stenka class) belonging to the Ukrainian coast guard.

Shame, could have been handed over to the DNR

BTW the DNR expanded yesterday. Past it's administrative borders. The district of Rovenskoe in the Kherson region voted to join it 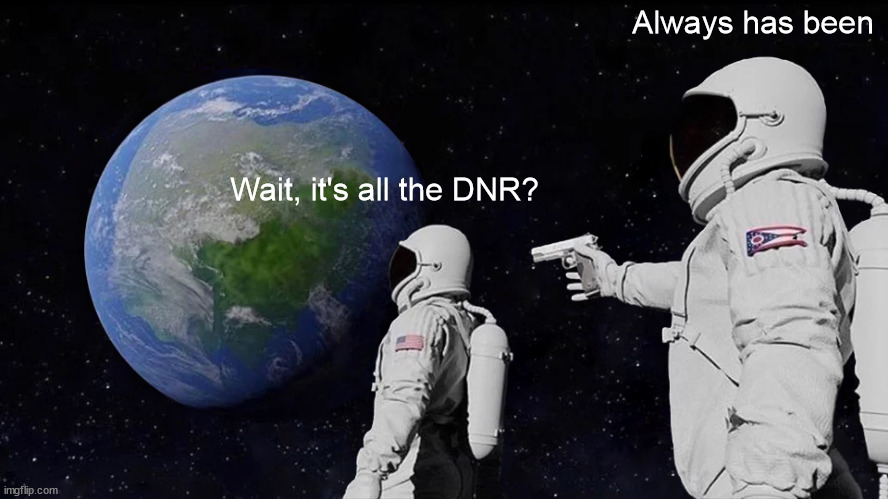 France is ready to provide security guarantees to Ukraine, but only after the end of the war - Bloomberg, citing Macron's representative."

Stealthflanker wrote:I'm kinda curious on Russian AEW deployment, why does Russia not seem to deploy A-50 in Crimea to monitor Black sea ?  That will improve coverage against low flyers and "eyes" for the fleet.

A-50U In Baranovichi have good coverage across the Poland and considerable part of Ukraine, But Romanian and Moldovan airspace are nearly without cover, the following is an example of possible launch positions and the respective coverage of the JASSM's. Notice the "Black Sea Gap"

Also there could be demand for Tu-214R deployement to pick Unmanned sea drones or mines which surface scan radar onboard ships may not be able to detect in time.

Because the Russians are lazy as f***. They will only start thinking about A-50 and Tu-214 deployment once they get a NATO JASSM fired from Romanian air space stuck up their ass.
MMBR

The look on zelensky face when Trump advised him to work with Putin in 2019. I bet he regrets not taking the advice now phase 2 has kicked off

A few days ago I had said that Moskva could have been hit by a NATO torpedo. Some forum members said that maybe the Moskva ran into a mine that Ukraine had laid in the past.

The thing is Moskva must have carried out a surveillance of that area to find out if there were any such mines. Plus, Moskva was ringed by modern FFG escorts, incl the latest Admiral Grigorivich class.

So it's quite possible that a U.S bomber B-2/B-52/any other launched a few Quickstrike-Extended Range standoff air-delivered mines at the Moskva, consequently, the Moskva got very little time to react.

That alone is already a bullshit. No other WarPac member has ever operated the aircraft they have.
Nobody used Su-27 nor Su-24, and MiG-29 delivered to all WarPac members were different versions.
The same applies to Mi-24, we have 30 pcs of D version, God knows the real operational status. Our Vs were left in Afghanistan.
Bulgaria had as many as SIX Vs back in 1990, and probably a whole TWO at the moment. Plus some 15 D variants.
Czech and Slovakia have some more Vs, but we talk single pieces only.
I suppose some parts can be cannibalized, but V has a different engine, rotor, electronics ...

So they are checking the ground for transferring every ex WarPac piece of hardware, making space for some tasty MIC contracts soon.
That makes almost no difference other than more targets for Russkies to practice.

The Armed Forces of the Russian Federation continue the special military operation in Ukraine.

High-precision missile strike destroyed up to 40 Ukrainian military personnel and 7 units of military equipment in Novovorontsovka and Kislevka.

Russian air defence means shot down 6 Ukrainian unmanned aerial vehicles in the air over Podvysokoe, Chistovodovka, Yakovenkovo and Pokrovskoe. Also, 2 Tochka-U tactical missiles were shot down near Donetskoe and Skilevatoe.

In total, 140 aircraft, 496 unmanned aerial vehicles, 253 anti-aircraft missile systems, 2,388 tanks and other armored combat vehicles, 256 multiple launch rocket systems, 1,029 field artillery and mortars, as well as 2,232 units of special military vehicles of the Armed Forces of Ukraine were destroyed during the operation.

Confirmatory video from Kremennaya.
The city center is under the control of the LPR army and the RF Armed Forces
https://t.me/intelslava/26030

2) Evacuation convoy was agreed today for Mariupol' to Berdyansk-Zaporizhzhia

3) U.S. President Joe Biden is expected to announce within the coming days another military aid package for Ukraine about the same size as the $800 million one announced last week, multiple sources familiar with the decision said on Tuesday

But will any be allowed out? Or is this part of the blame game to accuse Russia of not letting them out?

"We have managed to get a preliminary agreement on a humanitarian corridor for women, children and elderly persons," Ukraine's Deputy PM Iryna Vereshchuk says

️ Ukraine and Russia has agreed on a green corridor for women, children and the elderly from 14:00 today, say Ukrainian Deputy Prime Minister.

The_Real_Fly
@The_Real_Fly
·
12h
Russian Defense Ministry: We will observe a ceasefire in the Azovstal region while the proposal is in force, starting at 1400 Moscow time on Wednesday

At the beginning, #Russia even offered #Ukraine|ian troops (and even damn #Azov!) actual corridors to leave #Mariupol—instead of surrender—to preserve the city and save civilian lives and property. All rejects. #Azov wanted blood and to have as many civilians as possible harmed.

#Russia has been offering humanitarian corridors for the past two days. And countless times before. I am not even sure I could remember (or could count using all my fingers and toes) every time a humanitarian corridor to civilians and surrender to #Azov was offered by #RF. +

From the angle of fire are these targeting at pretty much maximum range? Doesn't look like they are expecting any counter battery fire.