Despite them winning all the time. 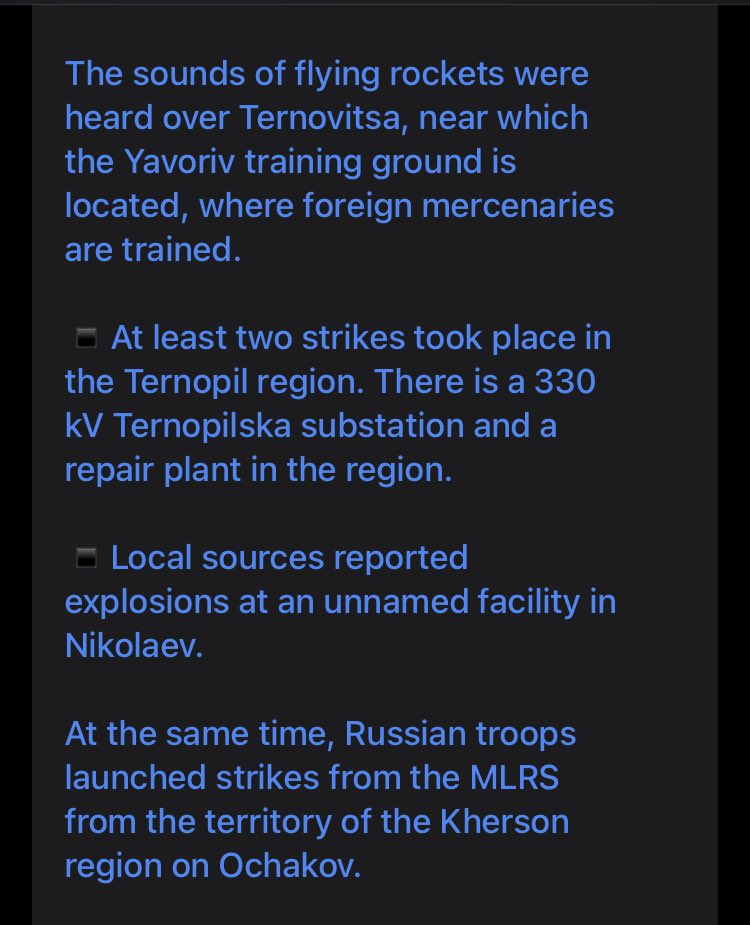 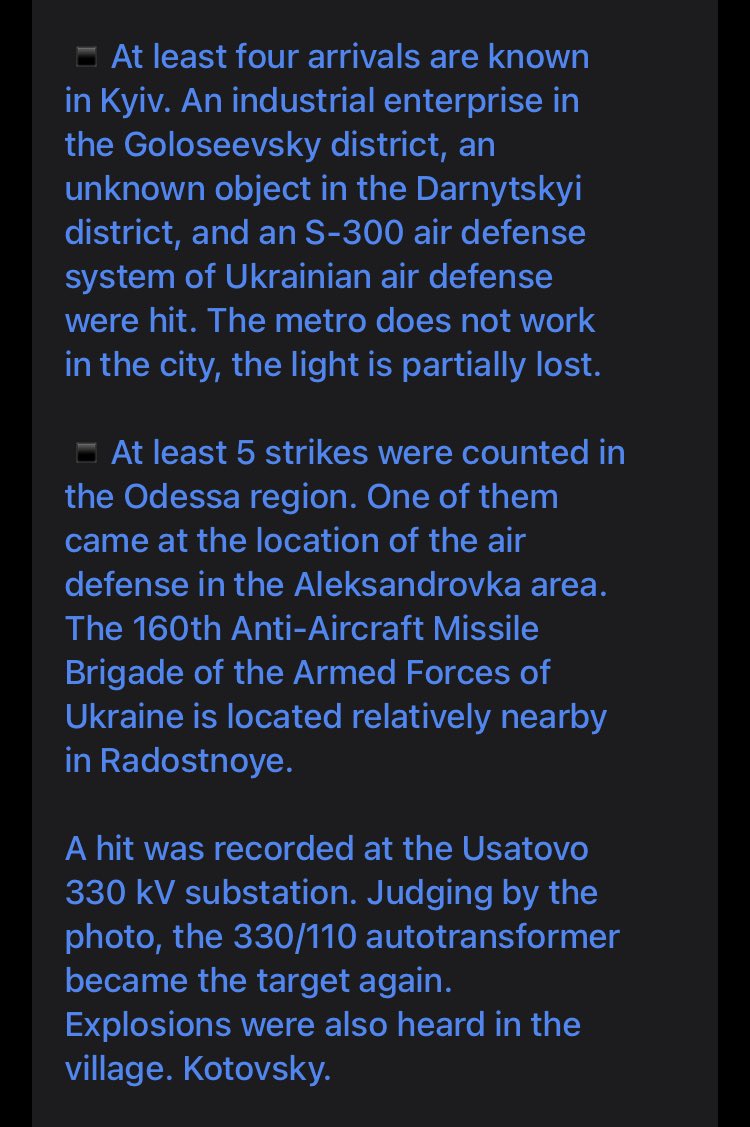 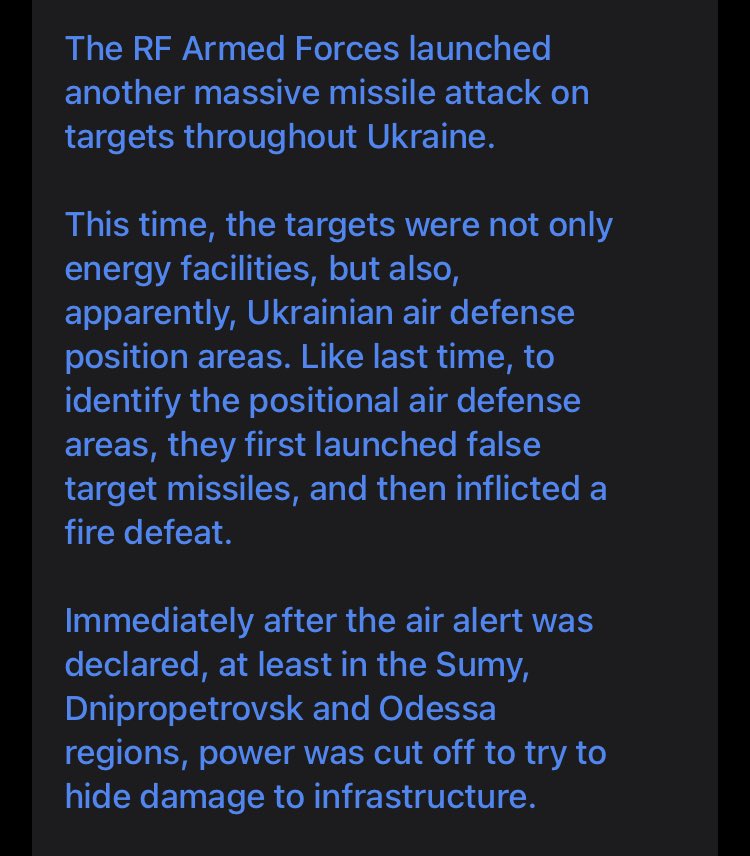 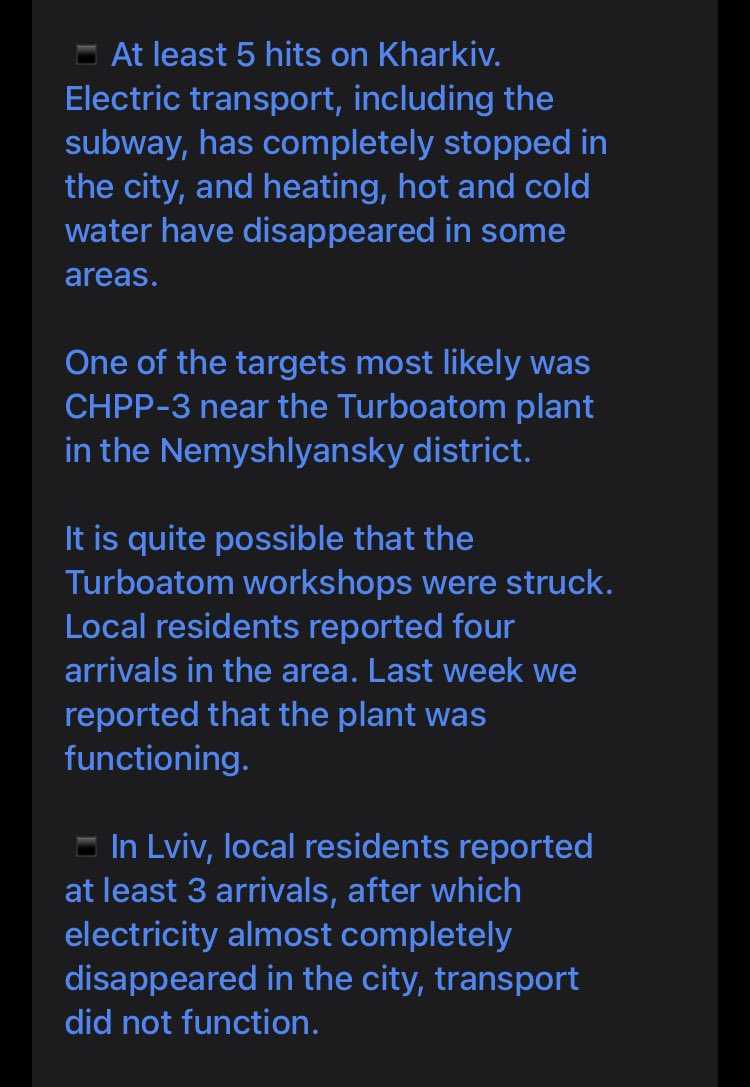 Can you reprogram targets on cruise missiles already in the air? Like, send a dummy missile and with a one minute delay a real missile in similar direction, enemy air defense radars expose their position, then reprogram the real cruise missile while on route with exact target coordinates?

I can imagine that for mobile air defense systems there is enough flight time to evade an incoming cruise missile unless it was already on its way in a somewhat general direction.
Podlodka77

The French publication writes that due to the high rate of fire, the resource of the barrels of the supplied self-propelled guns wears out quickly. This problem is quite sensitive for the Ukrainian army, which does not have access to spare parts.

Ukrainian fighters at a meeting with the French Minister of Defense said they want to simplify cooperation and be able to repair the Caesars on their own in their country, and not send them for any complex repairs to Poland, as this takes a lot of time and exposes self-propelled guns to unnecessary risk.

The article also notes that due to the complexity of maintenance, Paris also does not want to supply Leclerc tanks to Ukraine.
https://t.me/intelslava/42879

Explosion and powerful fire in Kharkov 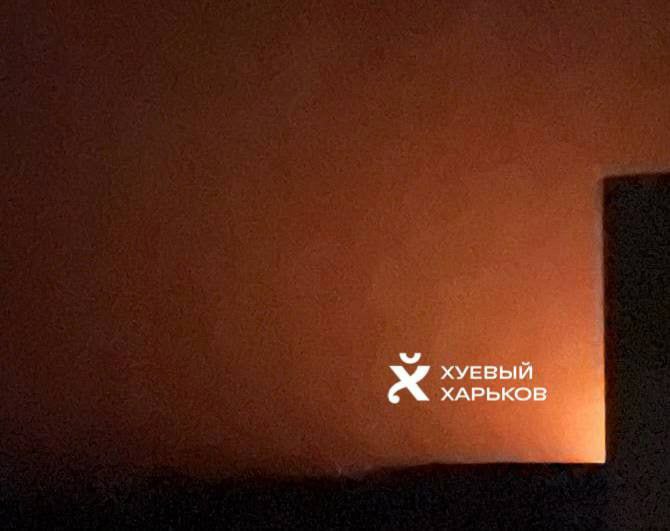 Putin signed a federal law providing for criminal liability up to life imprisonment for creating a sabotage community, training and facilitating sabotage, financing and propaganda

The Ministry of Defense of Belarus showed how they identified and shot down a stray Ukrainian SAM from S-300
https://t.me/intelslava/42882

We have visual evidence of mulitple Caesars having been destroyed. I like how everyone omits these things. "Need repair, barrel wear"... I'm sure barrel wear is an issue in the non-destroyed ones, but yeah.

We have visual evidence of mulitple Caesars having been destroyed. I like how everyone omits these things. "Need repair, barrel wear"... I'm sure barrel wear is an issue in the non-destroyed ones, but yeah.

I agree with you, but it's easier to write "howitzers need repairs" than what it really is - that a good part is destroyed.

This Peugeot needs a repair either, you know ... 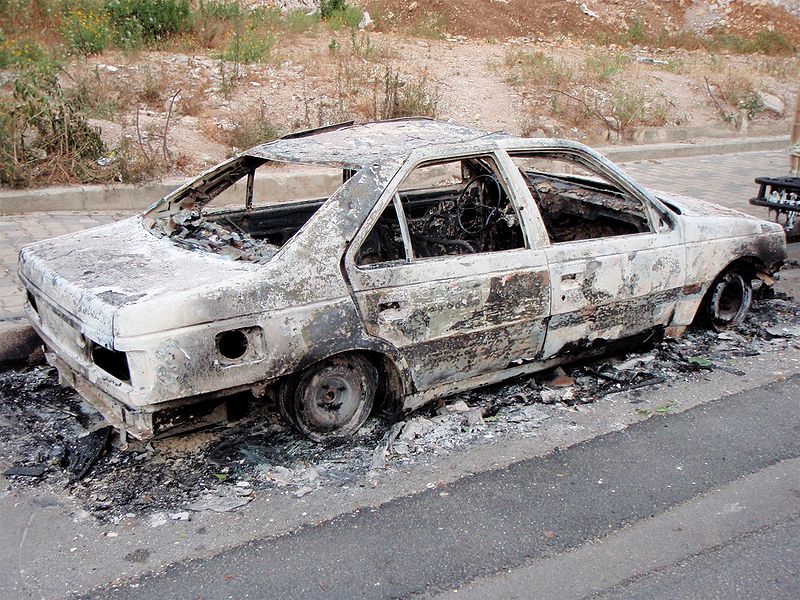 Can you reprogram targets on cruise missiles already in the air? Like, send a dummy missile and with a one minute delay a real missile in similar direction, enemy air defense radars expose their position, then reprogram the real cruise missile while on route with exact target coordinates?

I can imagine that for mobile air defense systems there is enough flight time to evade an incoming cruise missile unless it was already on its way in a somewhat general direction.

The modern ones can.
You can redirect an Iskander in mid-flight to the other target.
Or correct it to the moving one.
Same applies to Ch-101 and 102.
Not sure the Caliber, it was supposed to be an inexpensive missile just to throw away.
But two way datalink cost close to nothing, and the coordinates take only several digits transmitted.

According to some sources Russia is using E95 drones again to "motivate" AD systems. 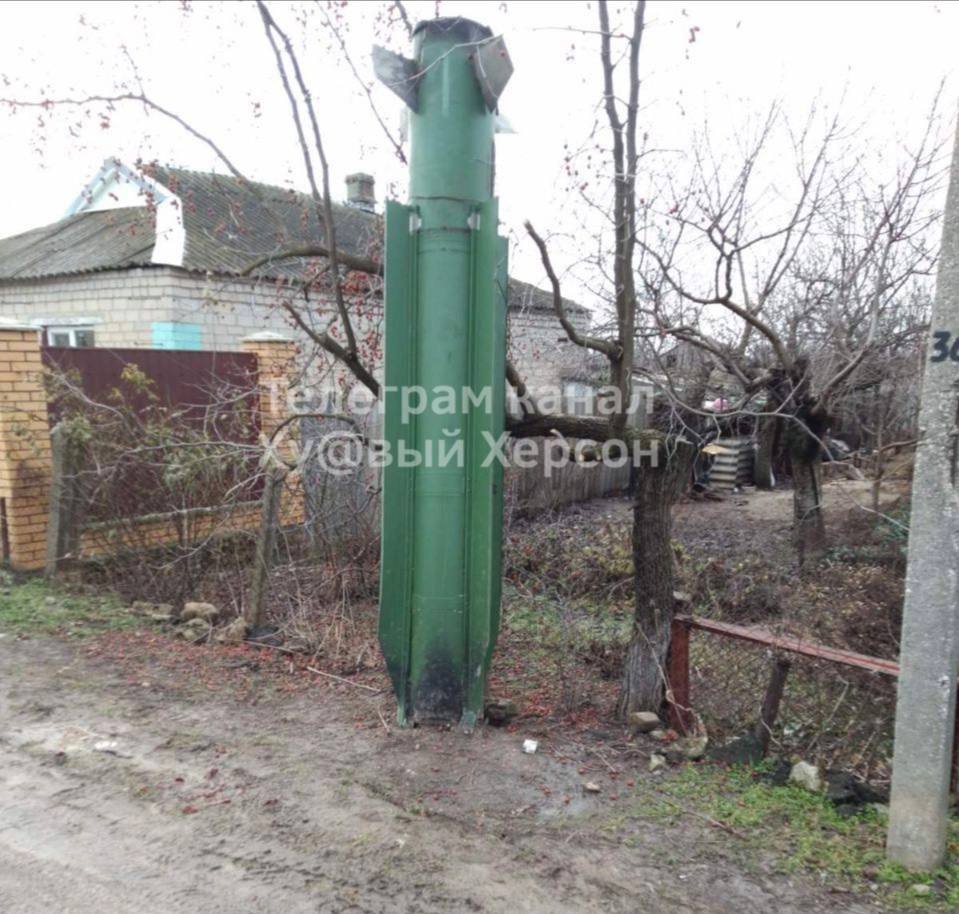 Looks good enough to be re-used. 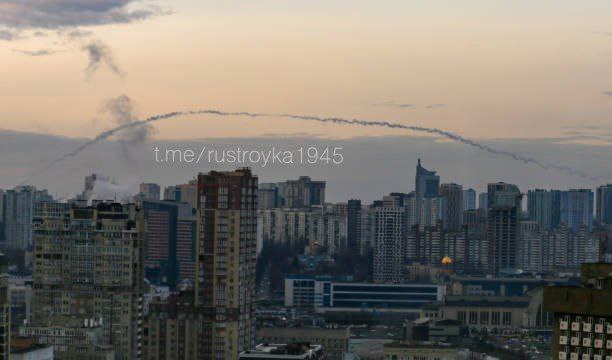 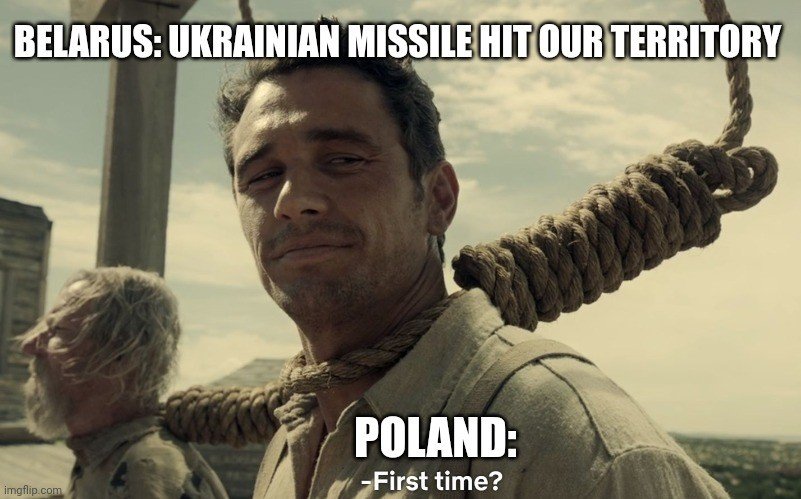 Bro, that Peugeot 405 is 10 times better quality than anything the French have produced in the last 20 years.

10 critical infrastructure facilities of Ukraine were damaged as a result of a morning missile attack, - DSNS

An actor from Poland was destroyed near Bamkhmut, who boasted about how he killed Russians.
On the night of December 5, Russian troops liquidated two mercenaries from Poland.
One of them is 41-year-old actor Janusz Sheremet.

Oh sure, a good old 405 !
A fantastic car for a while!
Just need some French champagne, and will drive like crazy any second!

Hole, this is the same guy killed in combo a two weeks (?) ago.
Saw that too, not sure why they took out this story again.

Oh thanx bro, but we have had enough of them for a while now

Construction is dropping like crazy, housebuilding is bleeding, and even pierogi get some local competition lately.
You can take them all, I saw some free apps in Prora when I was on Rugia last time - just put them there 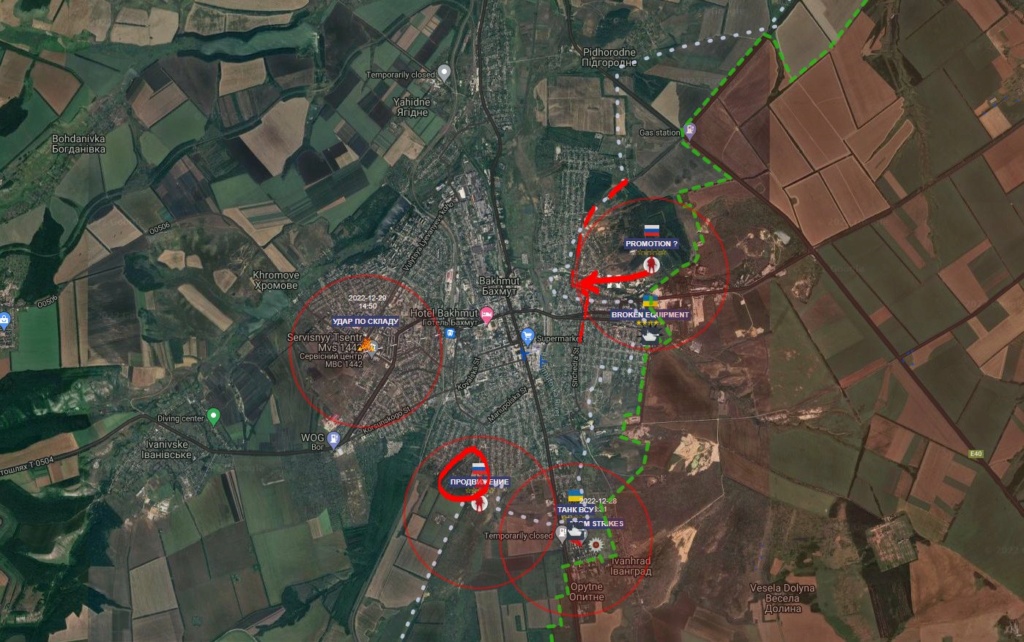 Still needs confirmation but it seems Wagner is moving.

Maybe they had a new pic of one of the killed.

Not a bad way to start winter break 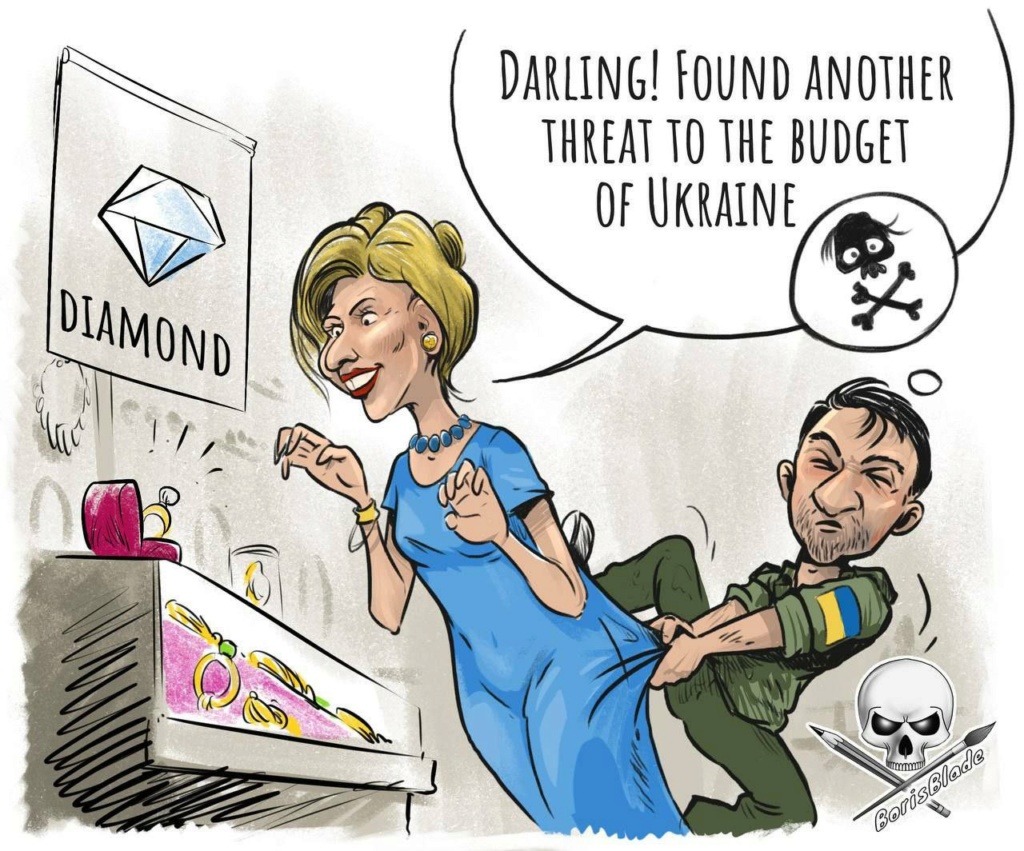 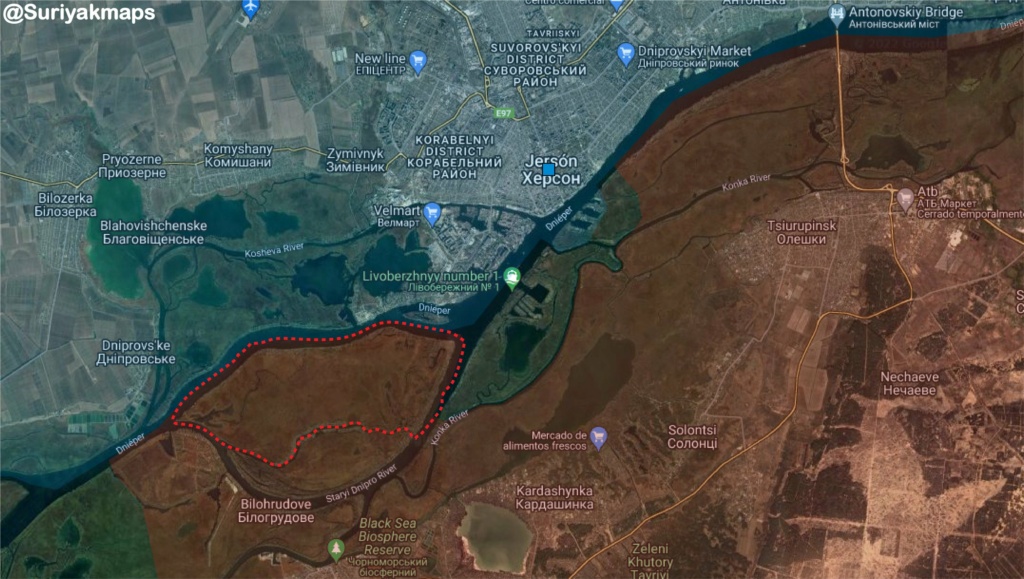 Russia secured Potemkin island, no resistance from the Ukros. 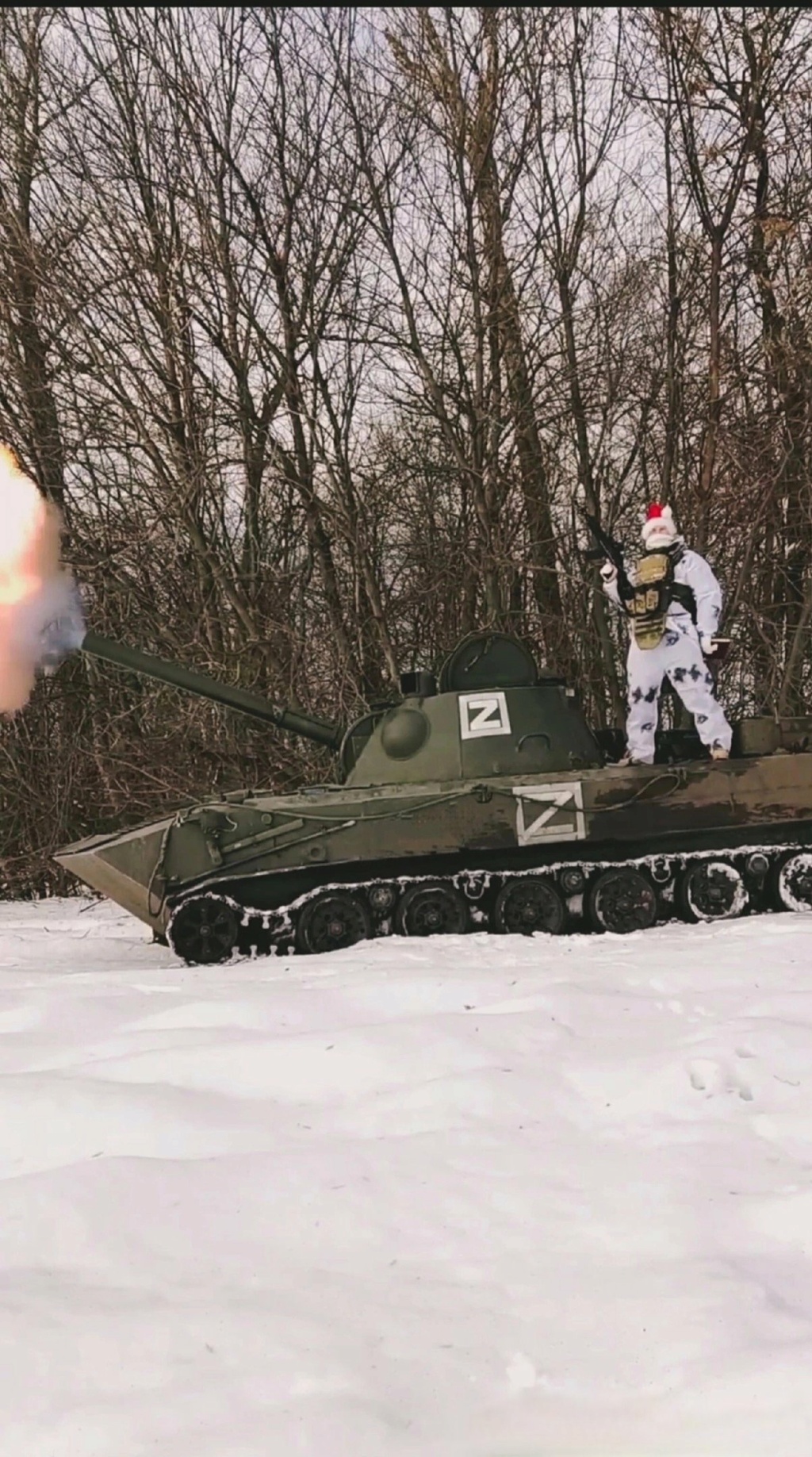 For urgent deliveries of Xmas gifts.

Regarding Pele: Now he and Maradona can play football in one team. 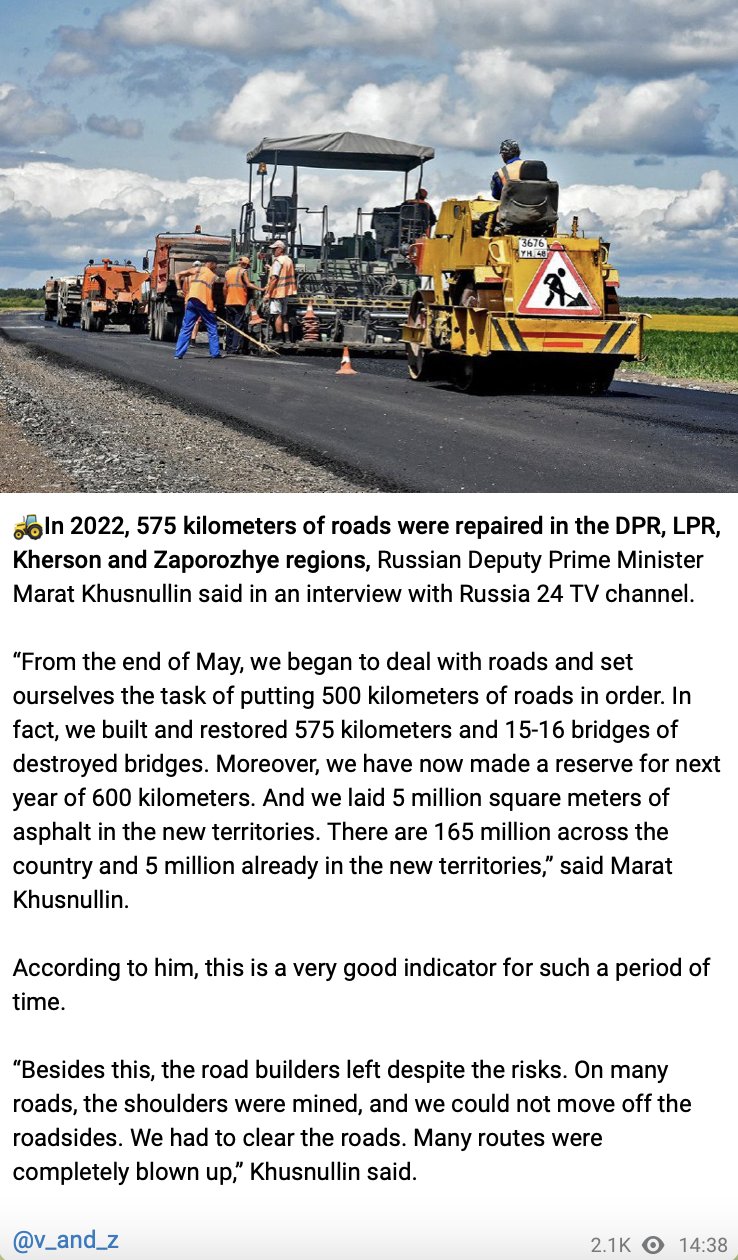 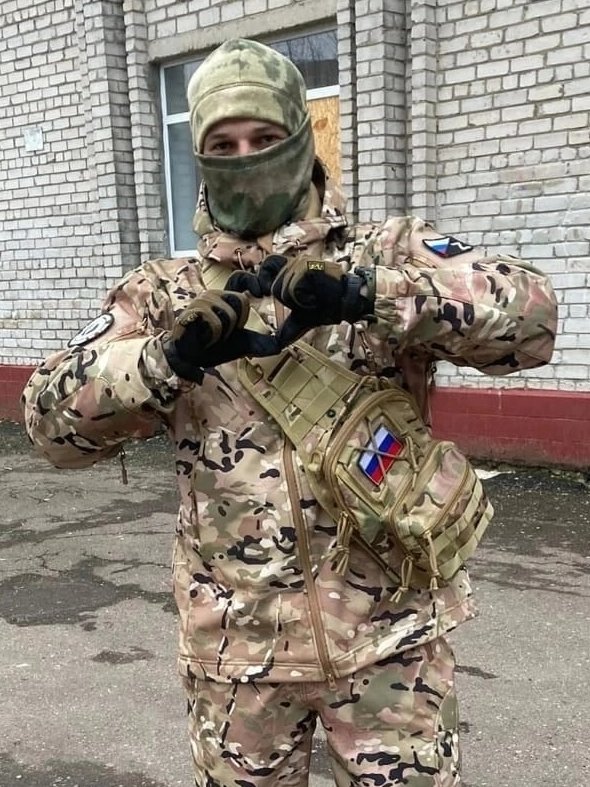 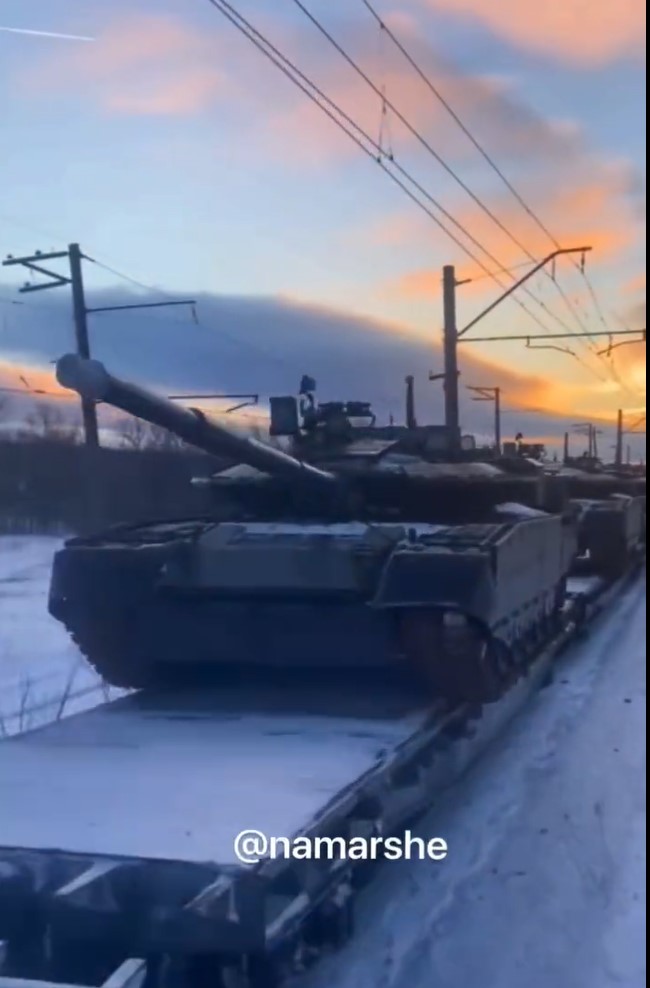 Who is donating all those tanks to Russia?

I mean... Russia can´t be producing them. The MSM told me Russia is a backward country with no
industry and an economy the size of Barbados. Those trustworthy reporters would never lie to us!

The Armed Forces of the Russian Federation continue to conduct a special military operation.

In the Donetsk direction, Russian troops continued their offensive, which resulted in the occupation of new advantageous lines and positions. The losses of the enemy in this direction during the day amounted to more than 80 Ukrainian servicemen killed and wounded, four infantry fighting vehicles, three armored fighting vehicles and six vehicles.

In addition, two enemy sabotage groups were destroyed in the areas of Vremevka, Donetsk People's Republic, and Levadnoye, Zaporizhia region.

Missile troops and artillery of troop groups hit four AFU command posts near the city of Kherson, settlements: Kupyansk, Novoosynovo in Kharkiv region and Gavrilovka in Dnipropetrovsk region, as well as 83 artillery units in firing positions, manpower and military equipment in 102 areas. Three artillery ammunition depots of the AFU were destroyed in the areas of Seversk and Artemovsk in the Donetsk People's Republic and Stepnoye in the Zaporozhye region.

Russian artillery intensified in the Zaporizhzhya direction. Strikes on Plavnya and Kamensky. This is in the direction of highway M-18, which leads to Melitopol. To the east, Shcherbakov, Novoandreyevka, Novodanilovka, Malaya Tokmachka and Belogorie were shelled. The AFU responded with a missile strike on Tokmak. More than once. There is an airfield and an important logistic center of the Armed Forces of the Russian Federation. (Fig. 1)

In the Ugledar sector, apart from the town itself, Russian troops struck Bolshaya Novoselka, Prechistovka and Zolotaya Niva. In the area of the last of these settlements they tried to move on the ground. The goal was to reach the roadblock. (Fig. 2)

There are no significant changes on the Donetsk front. The Russian army attacks Novomikhailovka for the umpteenth time. There is fierce fighting in the city limits of Marinka. The Ukrainian Armed Forces are holding their ground. The Russian Armed Forces made further attempts to attack Nevelskoye, Pervomayskoye, Vodyanoye and from the direction of Opytnoye. (Fig. 3)

Near Bakhmut the same picture. The Wagner PMC is persistently trying to prove that its "music" is major. It conducts offensive actions in the direction of Kleshcheevka and from the side of the local Opytnoye. On the eastern outskirts of Bakhmut they try to attack the AFU. But to the north of the city, the Wagner PMC also turned on the "bandwagon" in the area of Podgorodne. That's where the M-03 highway is. But it's not a long way to cut off its section to supply Bakhmut. To the southeast of Soledar all the same offensive actions in the direction of Bakhmutsky and from the side of Yakovlevka. (Fig. 4)

1 - Yes there is evidence of the destruction of Himars.


2 - Even Ukrainian sources admit the destruction of 60% of the first batch of Himars by the end of August.
https://t.me/legitimniy/13286

3 - Russia has over 120 Smerch/Tornado-S MRLS that can fire twice as many rockets as a Himars, rockets with a larger warhead plus 9M542 GLONASS guided projectiles with 50% more range than the Himars.
There is nothing Ukraine can do with Himars that Russia cannot do better with its MRLS.

4 - Most of the Himars' attacks are against civilians, the most famous being against the Elenovka prison camp, and the Antonovsky bridge.
It is worth remembering that even under months of attacks by the Himars, the Antonovsky bridge allowed Russia to cross thousands of men and equipment during the withdrawal in Kherson.

This is pretty interesting, Grayzone journalists got kicked from a Web tech conference in Portugal, by order of Zelensky's wife. 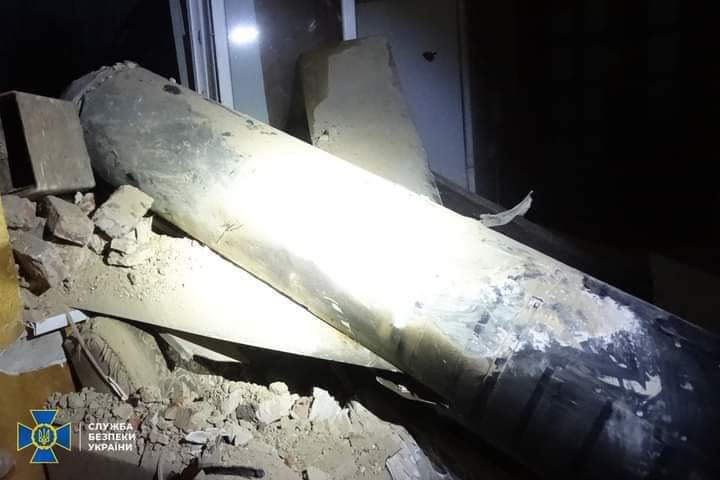 Looks like that "5v55" was actually a Russian missile, possibly a decoy with the warhead removed. 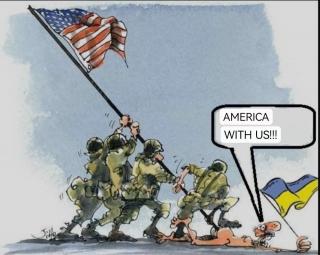 Looks good enough to be re-used.

The entire front section is missing... it is not stuck in the ground... this is a SAM whose warhead has exploded and this is the remaining portion of the missile which has fallen back to earth... intact.

Lots of OT stuff about to be pruned to be sent to the most recent talking bollocks thread...


While it may well be true that some himars or M270 have been destroyed, theres no definitive proof unlike AHS krab, m777, fh-70, burevoy and zuzana.  We have no photographic proof of CAESAR and pzh2000s being destroyed beyond repair either.

If the Russians have failed to provide proof that they destroyed Ukrainian smerches, and haven't claimed their destruction, then its likely that they e failed to destroy many or any himars either.

No shame, mlrs is super hard to destroy but its necessary.

Also intelslava is a shitty unreliable source for anything. Its the same channel that  showed destroyed Kh-59 parts and said it was a downed Ukrainian missile,and it keeps repeating pushilins BS lies as fact, lile the times he claimed seversk was captured and that entire maryinka was captured.

The fact that ALAMO and others have gotten ballistic at the simple clear request of clear photographic that the a himars or m270 was destroyed, shows the level of delusion and retarded butthurt some habe here. The deflections are also hilarious.