I can't find better words to describe people like you

At some point someone needs to compile all the (failed) attempts at damage control from the useful idiots like yourself - and then match them with the grotesque pre-war psy-op the regime propagandists were running.

From 'we can be in Berlin in 4 weeks but we just don't want to' to '180 days into the war our military infrastructure in Russia Proper is now getting wrecked this actually means we are winning'.

Just for the fun of it.


Zelensky faces outpouring of criticism over failure to warn of war

Singular_Transform wrote:
Oh, huge relief, the pressure because the Russians can't buy new Audis will force them to give up Ukraine and sell again cheap gas to Europe.
Seriously, you compare the political pressure generated by freezing and starving with the pressure caused by not having the newest BMW ?
Great, I am sure every poor household in Europe will have huge relief even if freezing and starving knowing that they can buy electric blnaket from China with the Visa card.
Have you ever heard about the "maslow hierarchy of needs  " ?
Russians suffering on the level 6 due to the NATO sanctions, NATO European countries suffering on the level 1.
Whom will break faster ? The starving German, or the Russian using old and ugly car?

To begin with, European car brands are obviously lagging behind the competition.
The situation changes drastically.
You can buy a luxurious car from China or Korea at any moment, and the variety of choices can kill.
Lacking Audi will soon be a pain in the ass, but only for Audi

if you can have a Genesis or Hongqui.

Well, if the people in Russia are really desperate they can buy the newest western models via companies in India or Brasil or some other not so un-friendly country. 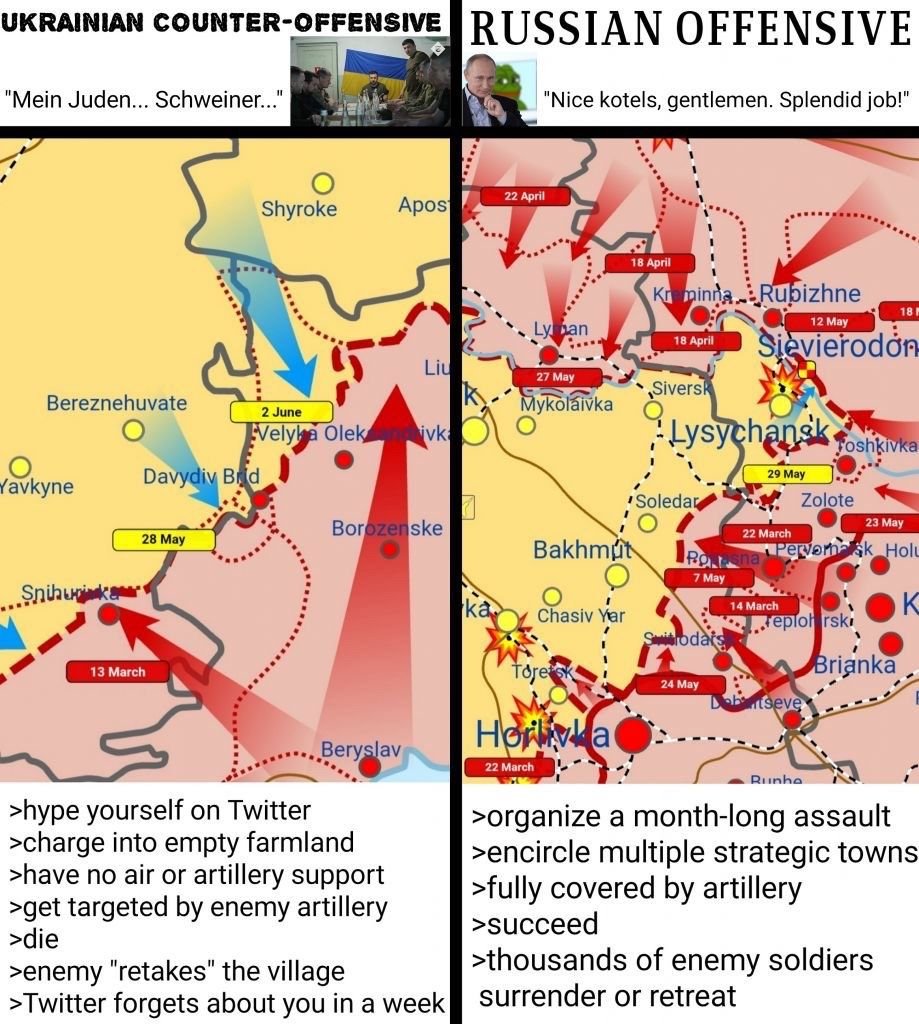 All those crying about some NPP or a fire at some airbase shows that Russia is on the right track. The regime in Kiev is getting more desperate by the minute.

They just can import them from China, if someone is really so desperate.

The only bit of all that drivel worth quoting

BTW - Fidel Castro threatened to invade Namibia/SWA but when the SADF mobilized an extra 140 000 reservists he changed his mind. One of the longest conflicts in Africa ended and everybody went home. The ANC had virtually no role to play in all of this - except in your Hollywood script.

Putin agreed in a conversation with Makron to send an IAEA mission to the Zaporovsky NNP.

Arrow wrote:Putin agreed in a conversation with Makron to send an IAEA mission to the Zaporovsky NNP.

That is spin. The Russian government has been pushing for IAEA inspection but the IAEA at the prompting of its
NATzO masters was dragging its heels. Now these lying sacks of shit claim that "Putin agreed". GTFO.

Arrow wrote:Putin agreed in a conversation with Makron to send an IAEA mission to the Zaporovsky NNP.

The IAEA isn't going to show up and validate Russia's claims of Bandera troops shelling the ZNPP. Russia will just have to take the rest of Zaporozhye and work their way up to Dnepropetrovsk.

sundoesntrise wrote:
At some point someone needs to compile all the (failed) attempts at damage control from the useful idiots like yourself

We can confirm explosions in Sevastopol. There were 2 explosions minutes ago, and both were air defence.

We can’t confirm that any ground explosion took place, and no one can visually confirm any fires.

Funny how Ukrainian media reported it half an hour ago — all at once. Upfront

According to preliminary data, an unmanned aerial vehicle was shot down in the area of ​​Belbek airport by means of air defense, there were no casualties - Governor of Sevastopol
https://t.me/asbmil/4140

100% confirmation that all Ukrainian reports of explosions in Belbek airport in Sevastopol were fake news.
https://t.me/asbmil/4142

sundoesntrise wrote:
- and then match them with the grotesque pre-war psy-op the regime propagandists were running.

The only grotesque psy-op the propagandists were running come from Kiev regime, as you can see in the links above.

sundoesntrise wrote:
From 'we can be in Berlin in 4 weeks but we just don't want to'

I never said that

sundoesntrise wrote:to '180 days into the war our military infrastructure in Russia Proper is now getting wrecked this actually means we are winning'.

Ukraine takes a month to do the damage that Russia does in a day, but at the end of the day Russia is the only one whose infrastructure is being destroyed... and if anyone disagrees with that it's because they're a propagandist idiot doing damage control

We've never spoken before, so I do a "copy/paste" of a comment from the Telegram channel Levi and suddenly you appear calling me "useful idiot" and "drama queen", that says a lot about who here is the mad loser.

i save this for later... let's see if aged well 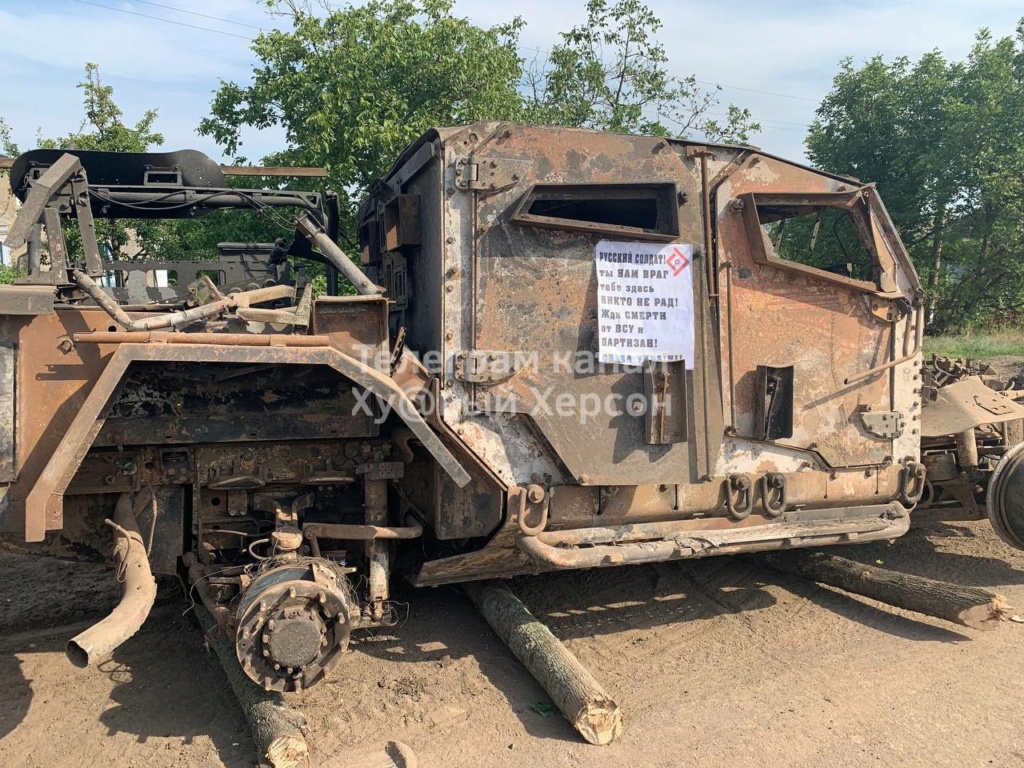 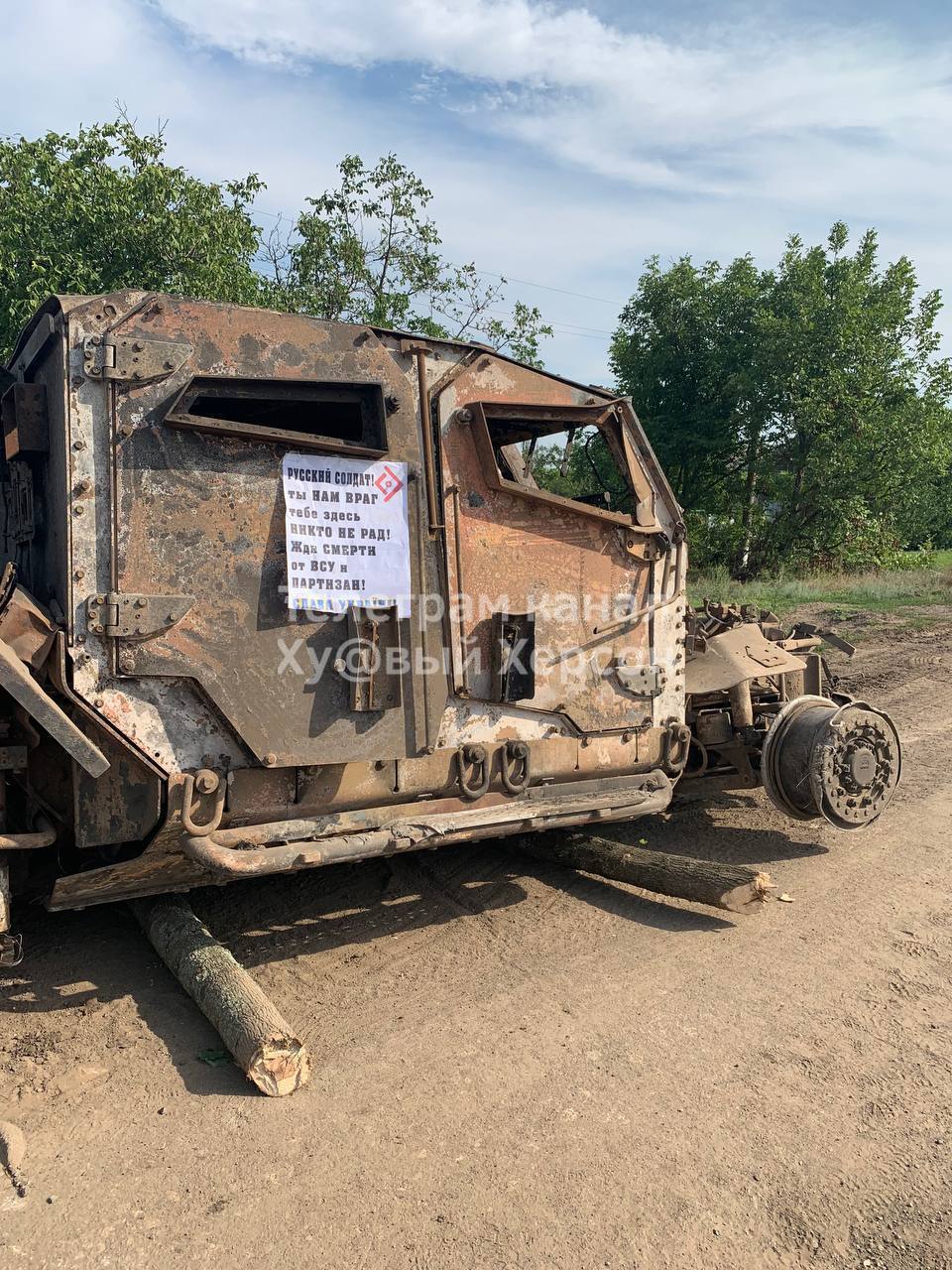 Another Husky PMV, this time completely destroyed. Ironically, there’s a sign on it directed at Russian troops, who don’t use such vehicles.
https://t.me/DonbassDevushka/19922?single

Allied troops entered Soledar from the industrial zone of the city, liberated and are already under control of several streets - NM LPR
https://t.me/intelslava/35738

Arrow wrote:
Talks with Erdogan and the UN Secretary began in Lviv. 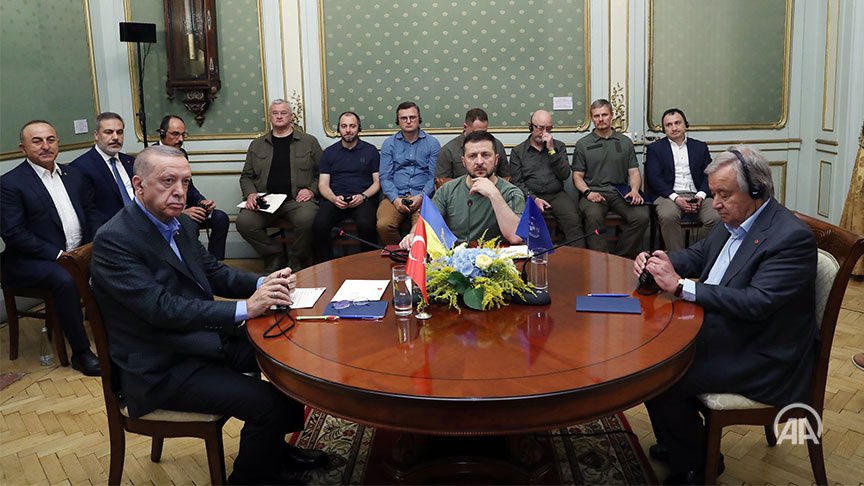 Some drones were shot down on various locations in Crimea last night.

The FSB arrested guys from a Hizb ut-Tahrir "cell" few days ago, but that is probably irrelevant (NB, they've been courted by UA in the past, but AFAIK they're not particularly inclined towards terror/sabotage, just Islamic supremacism and subversion of the societies they operate in by other, less hands-on means). Something could have changed in their MO though.

That "Colonel" is polish guy by name and by how he speaks "russian". He is a foreigner, polish merc. That is not even Ukrainian which borrows roughly 50/50 russian and polish language. He said several phrases that are not in ukrainian and not with "ukrainian" accent which is just the Russian way to pronounce certain words and phrases.

Especially at the End where he said "No, no discussion"  he says it not in Ukrainian but in polish "Ne, ne ma obsuzhadnie". The  "Ne, ne ma" is polish with a polish accent however he tried to speak russian  by using the word "obsuzhdanie" which means discussion.

He is a polish mobster of polish mafia and was involved of several mysterious "suicides" of unwanted people. 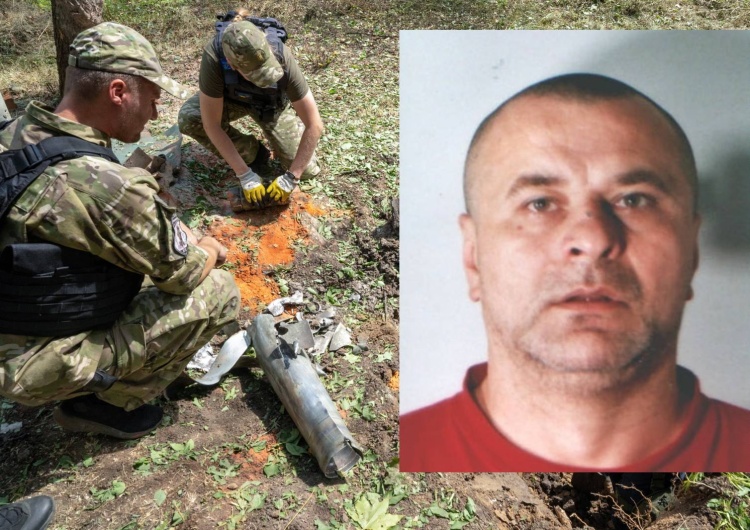 Real ethnic Poles do not flee to Ukraine for any reason.

That "Polish" criminal you mentioned above has almost certainly ethnic Ukrainian ancestry.

According to this Polish article the guy in question receives preferential treatment and a great deal of favoritism from his Ukrainian superiors:


No genuine ethnic Polish person would have been treated so favorably by the Ukrainian government and military leadership.

Odin of Ossetia
People need to start getting banned for quoting long posts, I swear to God.

The Pentagon announced another aid package for Ukraine for USD 800 million. Including, of course, HIMARS M 270, TOW-2, AGM 88 etc. Which of course will not change anything.

i save this for later... let's see if aged well

Arrow wrote:
Talks with Erdogan and the UN Secretary began in Lviv.

https://www.stalkerzone.org/new-russia-instead-of-anti-russia-what-is-beyond-the-roller-of-demilitarisation-denazification/
Good read. It seems the problem on the border are the DPR customs guys. Doesn´t matter. In a few weeks this border will be (officially) gone.

kvs wrote:But this is the same delusional nonsense that is characteristic of the Kiev regime's approach in general.   They can't induce any Chernobyl type failure
with VVER-1000 reactors.   They can't kill the backup power either which would be required for the Fukushima scenario.

The shelling is a Twatter offensive.

Some sources were hinting at the possibility of hitting the spent fuel storage to report some radiation leak and demand the plant to be put under international tutelage. I am sure this is related to the desperate need for energy that Europe has, looking into the winter, and the inadmissibility for them of losing the contribution of the biggest NPP in the continent if Russians decide to turn off the lights.

Regardless, I don't see how you cannot damage the auxiliary supply in a power plant by means of appropriate weapons... a shut down core still needs cooling, I am not sure about the characteristics of this specific type but that is the preliminary information I had read about ZNPP, do you have more details about whether it could maintain integrity without auxiliary power?

Regarding breaching the core, NPP are normally, at least in the West, not even up to protecting against the crash of an airliner, much less if appropriate weapons are used. By no means would I assume a Tochka cannot get through 1 m reinforced concrete. A bunker buster goes through more than 30 m of solid rock, the resistance of a building is not even in the same category.

GarryB wrote:It the cooling system is disabled they can just shut the reactors down and there is no chance of overheating and an explosion.

None of the nuclear material is enriched to the point where it can sustain a nuclear explosion... a shut down reactor would be just fine... unless hit directly by a bunker buster heavy bomb.

Sure, I know it is not about a nuclear explosion. But I am not so sure the core can be kept without permanent cooling. From what I know, in the best case the reactor would get damaged and unusable.

PapaDragon wrote:Once those control rods are jammed in there is nothing they can do without a bunker buster and at most they will just collapse the roof and add a protective layer over the reactor room floor