MOSCOW, February 16. /TASS/. The improved Project 22350 frigates Admiral Amelko and Admiral Chichagov will become the carriers of hypersonic weapons and will be capable of carrying 32 cruise missiles each, a source in the domestic shipbuilding industry told TASS on Tuesday.

"The pair [the frigates Admiral Amelko and Admiral Chichagov] will be capable of accomplishing the tasks that standard serial-produced ships of this series fulfil. They will carry a larger ammunition load. A possibility is available for installing hypersonic weapons," the source said.

"Under the contract, they will carry four versatile shipborne launchers each and this series of ships will be continued. Each launcher is designed for eight Kalibr-NK and/or Oniks cruise missiles and, eventually, for Tsirkon [hypersonic] weapons," the source said.

The original Project 22350 serial-produced warships built at the Severnaya Shipyard (part of the United Shipbuilding Corporation) carry two versatile shipborne launchers each. The Russian Navy is currently using the Project 22350 lead frigate Admiral of the Fleet of the Soviet Union Gorshkov for testing Tsirkon hypersonic weapons.

The frigate Admiral Gorshkov test-launched a Tsirkon hypersonic cruise missile for the first time in early October 2020. The missile launched from the White Sea struck a sea target in the Barents Sea. The Tsirkon developed a speed of Mach 8 and climbed to an altitude of 28 km. The next test-launch took place in November 2020. A Tsirkon missile successfully struck a sea target at a distance of 450 km, developing a speed of over Mach 8.

We will continue to develop the country's defense industry - Vladimir Putin took part in the ceremony of entering combat service of the Admiral Gorshkov frigate, equipped with hypersonic Zircons.

The frigate "Admiral Gorshkov" with "Zircons" on board goes on a long journey across the Atlantic, Indian Oceans, as well as the Mediterranean Sea, Shoigu.

So russia officially is the first country in the world to mass produce hypersonic glide vehicles, hypersonic ballistic missiles and hypersonic cruise missiles. Thats a great milestone. Now they better be used. Not bad for primitive nigeria with snow.

INTERFAX.RU - One of the most modern ships of the Russian Navy - the frigate "Admiral Gorshkov" set off on a long voyage. 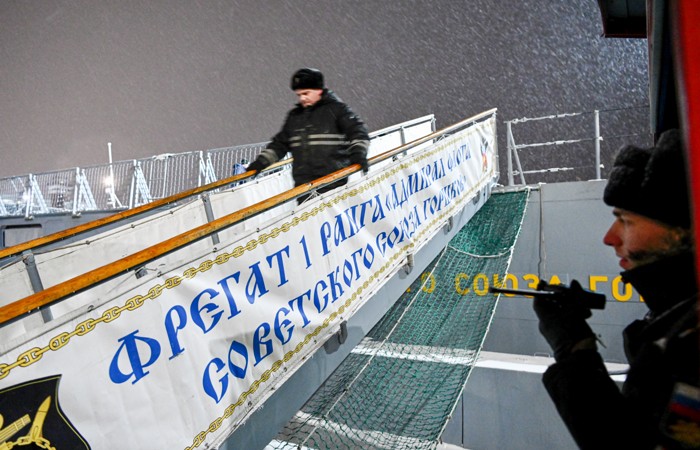 
The ceremony of entering the ship into combat service took place on Wednesday under the leadership of Russian President Vladimir Putin, it was held via videoconference.

The ship will sail to the Atlantic and Indian Oceans, as well as the Mediterranean Sea.
The commander of the ship, Igor Krokhmal, said that the frigate had completed a full training cycle before the voyage. “The ship has been loaded with ammunition for Zircon and Caliber missiles, air defense equipment, torpedo weapons and artillery. The crew of the ship is ready to carry out the tasks of combat service," Krokhmal said at the ceremony, the footage of which was shown by the Rossiya-24 TV channel.

Russian Defense Minister Sergei Shoigu said that the frigate "Admiral Gorshkov" will go on a long voyage to the Atlantic and Indian Oceans, as well as the Mediterranean Sea. According to him, the ship is capable of inflicting pinpoint and powerful strikes against "the enemy at sea and on land." He noted that Zircon missiles can reach speeds of up to Mach 9 and overcome any air defense-missile defense system.

"The main efforts of the military campaign will be focused on countering Russia's threats, on maintaining regional peace and stability jointly with friendly countries," Shoigu said.

"After the exercises and training, the crew will practice the use of hypersonic weapons and long-range cruise missiles in various conditions," the minister said.

On December 11, the Admiral Gorshkov arrived at the base in Severomorsk after maintenance at the Kronstadt Marine Plant, the military reported.

On December 21, at a meeting of the Board of the Russian Defense Ministry, Putin said: “In early January next year, the frigate Admiral Gorshkov of the Soviet Union Fleet will enter combat service with the latest Zircon sea-based hypersonic missile systems, which have no analogues in the world.

In February 2019, in a message to the Federal Assembly, Putin announced that the Zircon missile would be capable of hitting ground and surface targets at a distance of more than 1,000 kilometers at a speed of about Mach 9.

So russia officially is the first country in the world to mass produce hypersonic glide vehicles, hypersonic ballistic missiles and hypersonic cruise missiles. Thats a great milestone. Now they better be used. Not bad for primitive nigeria with snow.

You could equally wonder why the US who spends more than ten times more per year on their military, together with all their HATO mates which probably brings the total up to about 15 times more hasn't managed it yet... and not for want of trying...

Why does the west get such terrible value for money... I remember all through the cold war being told that workers in communist countries were not very productive and the advantage the west had was the high productivity of its workers... compared with the unmotivated drones of the communist world.

Never really suspected that it might just be creative accounting and corruption.

This frigate is a nice step, but many more steps are needed... the west has made it necessary.

Frigate "Admiral Gorskov" in the Norwegian Sea and on the way to the Mediterranean Sea.. 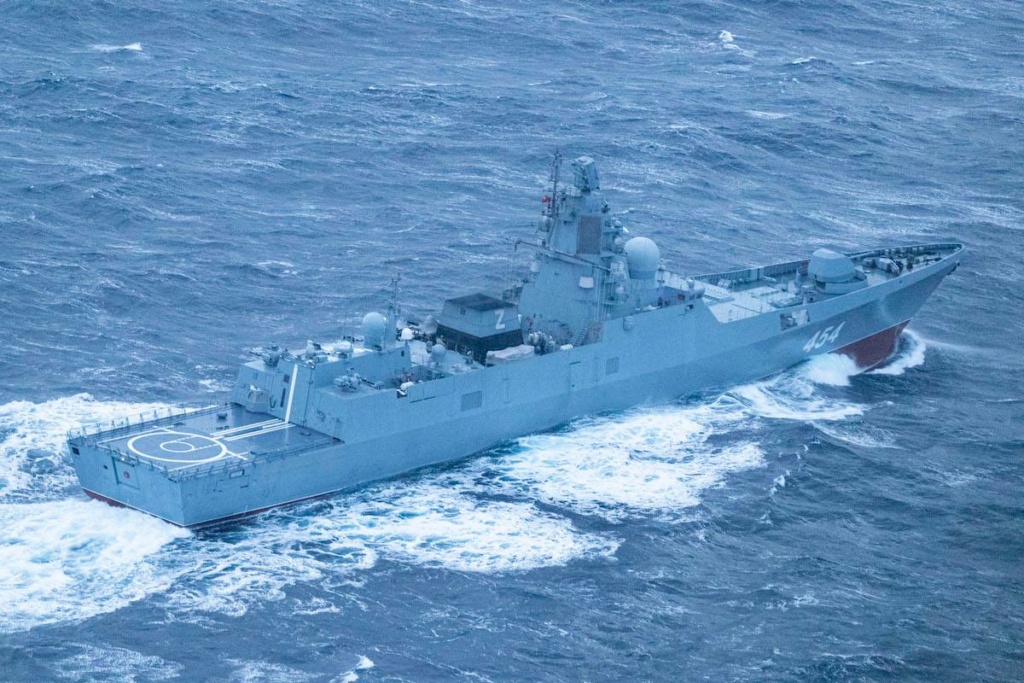 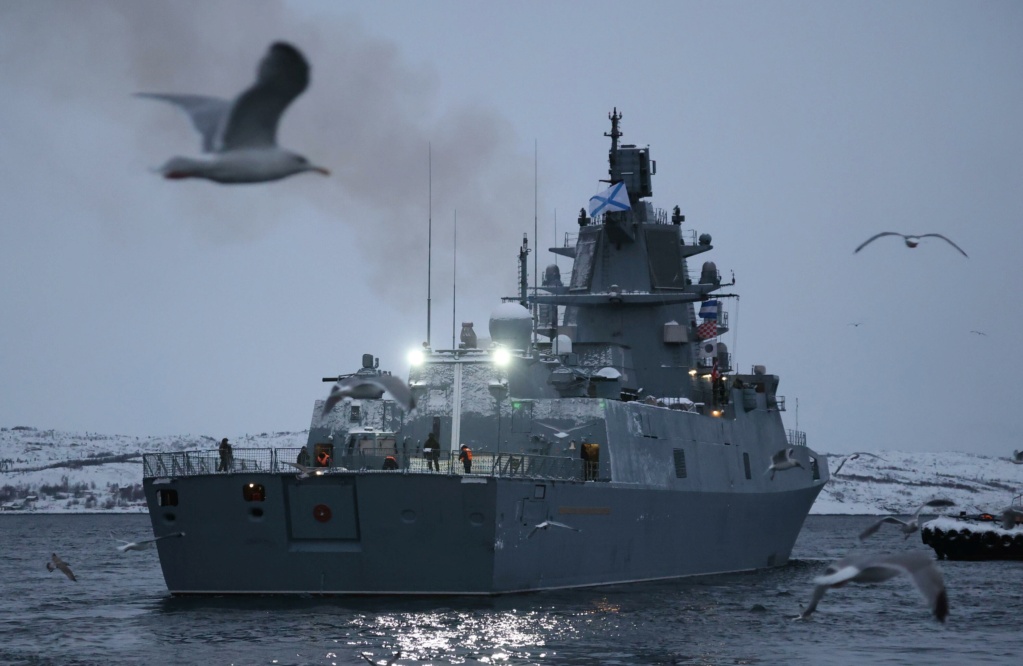 The press service of the Northern Fleet reported that the exercises were carried out using computer simulation of the tactical situation with a conditional defeat of air targets by anti-aircraft fire weapons.

MOSCOW, January 10. /TASS/. The frigate "Admiral of the Fleet of the Soviet Union Gorshkov", equipped with hypersonic missiles "Zirkon", repelled the attack of a mock air enemy in the Norwegian Sea in difficult hydrometeorological conditions. This was reported to journalists in the press service of the Northern Fleet.

"The crew of the frigate Admiral of the Fleet of the Soviet Union Gorshkov conducted an exercise to repel air attack weapons, aircraft and anti-ship missiles of a mock enemy in the Norwegian Sea in difficult hydrometeorological conditions," the report says.

It is noted that during the exercise, the waves in the Norwegian Sea amounted to 3-4 points, the wind speed reached 20 m per second.

The press service clarified that the exercises were carried out using computer simulation of the tactical situation with a conditional defeat of air targets by anti-aircraft fire weapons. The calculation of the air defense command post fulfilled the standards for maneuvering the ship. The personnel of the combat posts of detection, electronic and anti-aircraft fire destruction worked out the issuance and reception of target designation, as well as the conditional use of weapons of self-defense of the ship.

The press service recalled that the combat service of a detachment of ships as part of the frigate "Admiral of the Fleet of the Soviet Union Gorshkov" and the medium sea tanker "Kama" is under the command of the commander of the division of missile ships of the Northern Fleet, Captain First Rank Oleg Gladky.

On January 4, Russian President Vladimir Putin gave the command to the crew of the Admiral Gorshkov frigate to begin combat service tasks.

"Admiral of the Fleet of the Soviet Union Gorshkov" - the lead multi-purpose frigate of project 22350 of the far sea and ocean zone, it was built at the Severnaya Verf plant (part of the United Shipbuilding Corporation). He joined the Russian Navy in July 2018. In December 2022, he made an inter-fleet transition and arrived at the main base of the Northern Fleet - the city of Severomorsk - after scheduled maintenance at the Kronstadt Marine Plant.

The main strike weapon is the Kalibr-NK missile system. The ship took an active part in testing the latest Zircon hypersonic missile developed and manufactured by the Reutov NPO Mashinostroeniya (part of the Tactical Missiles Corporation).

You can appreciate the hull, and get an impression of the ship in some choppy sea

Of course it can get much worse, and a bigger ship would have advantages if the goal is to provide constant protection for a group of LNG tankers and oil tankers

Would a yasen or other Ssn provide some sort of "shadowing" on these types of missions?

MOSCOW, January 19. /TASS/. The ship air group of the frigate Admiral Gorshkov of the Fleet of the Soviet Union practiced flights of the Ka-27 helicopter from the ship in difficult hydrometeorological conditions in the Atlantic Ocean. This was reported to journalists on Thursday at the Ministry of Defense.

The flights took place with sea waves up to 3 points and wind speeds of about 15 m/s.

The cruise of the frigate "Admiral of the Fleet of the Soviet Union Gorshkov" is led by the commander of the division of missile ships of the Northern Fleet, Captain 1st Rank Oleg Gladky. The main objective of the campaign is to ensure the Russian naval presence in the strategically important areas of the oceans.

Since leaving the main base of the Northern Fleet - the city of Severomorsk - Russian sailors have traveled more than 2,000 nautical miles. It is planned that the crew will take part in several exercises with ships of other fleets of the Russian Navy, as well as with ships of foreign navies. 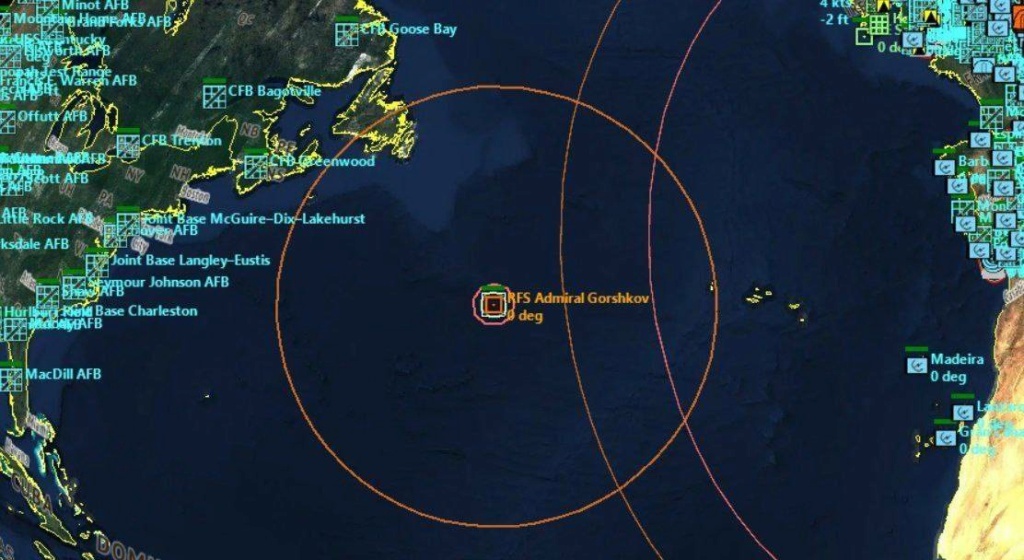 The frigate of the Russian Navy "Admiral Gorshkov" approached the Bermuda Islands in the Atlantic Ocean. The United States is only 1,000 kilometers away. It is no coincidence that experts focus on the remaining distance to the territory of the United States. As you know, the basis of the armament of the Russian ship is the Zircon hypersonic missiles capable of carrying nuclear warheads. And their range is just a thousand kilometers.

Recall, the frigate "Admiral Gorshkov" left Severomorsk on January 4. On a long trip, he is accompanied by a sea tanker "Kama". According to experts, the Russian ship has more of an image mission. He must demonstrate the national flag of the Russian Federation in strategically important areas of the oceans.

However, during the campaign, the frigate "Admiral Gorshkov" will have to solve quite specific tasks. The ship will take part in joint naval exercises with the Chinese and South African navies. The frigate will first enter the Syrian Tartus, where the logistics center is located.

At the same time, the campaign in the direction of North America was not announced.

It is assumed that the joint maneuvers will last from 17 to 27 February. It is known that naval exercises will be held in the Indian Ocean. The ships of the three states plan to work out joint actions and exchange operational data. According to the Ministry of Defense of South Africa, the task of the exercises is to strengthen the already flourishing relations between our countries.

Adm. Golovko is expected to be handed over to the navy in March 2023 already; looks like the remaining trials are going well or are expected to go very well.