And that, my friends, is a hell of a patrol craft.

In hindsight and now with this heavier version, Russia could've saved a lot of time, money and headache had they merged this class with karakurt and the later versions of Buyan into one major class with different variants for patrol ships,corvettes/missile boats.

They can't. They are different classes. Even Karakurt is not replacement for Buyan-M. Karakurt is ocean going missile boat, while Buyan-M is special river-sea class to operate from shallow waters and in the rivers. Bykov is larger patrol corvette for long endurance in the ocean. No need to give more armament on them as they already have Steregushy/Gremyashchy corvettes in that class. More armament mean shorter endurance time.

Karakurt can also operate on rivers like Buyan M. Moreover, it performs better at sea.

Why won't the Russians equip its 57mm gun with gun launched bulat missiles?

That 57mm gun is more than good enough to deal with any sea pirate. No need to waste expensive missiles on them.

Another problem with that suggestion is that Bulat is likely much bigger calibre than 57mm so firing them from a 57mm gun would be impossible.

Bulat is smaller than Kornet, and 8 Bulat missiles fit in the four launcher tube system for the Kornet, but I not seen any detailed information about the Bulat to suggest its actual calibre... Kornet is 152mm calibre so a half calibre missile is still going to be 70-80mm calibre.

The light Mirage class patrol boat carries the Shturm ATGM missile system with 6 Ataka missiles for use against sea and air targets, so using ATGMs on ships is not unheard of.

Soviet and Russian ATGMs tend to be relatively cheap and accurate... Ataka has a range of about 6km and a flight speed of about 450m/s which makes it a potent missile... it has been popular on Hind helicopters for quite some time as a weapon for hitting point targets out at reasonable distances, though these days it has been replaced by the Khrisantema.
Dima

IMDS 2021 showcased an already known variant of 22160 often mentioned in brochures, but I believe a better job can be done. I have many times mentioned the need for a mass produced, good, long range corvette/patrol asset for the Russian Navy based on the 22160 that's also properly armed. So did some rough illustration to show how it could look. 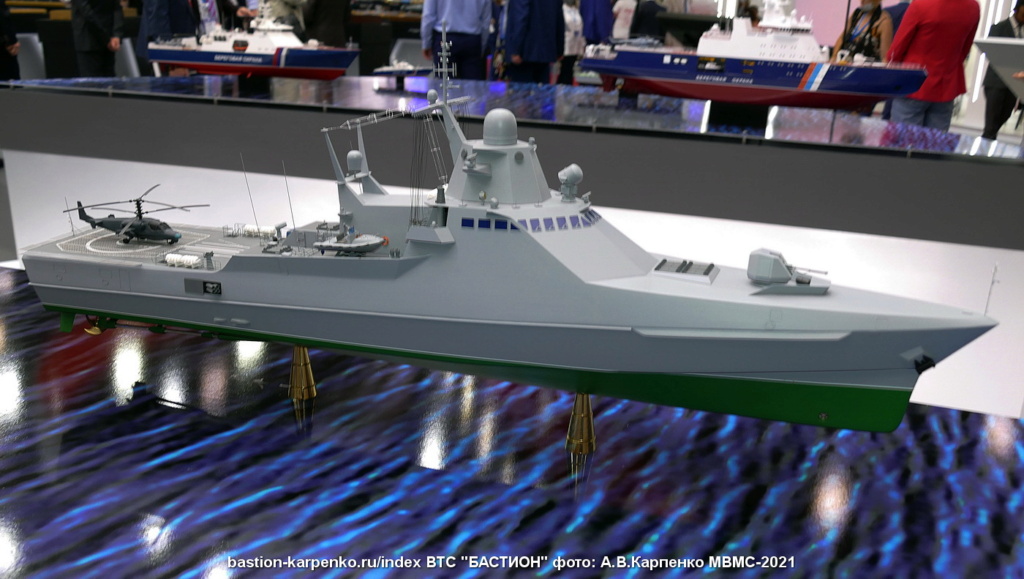 The above one is with decent AD layout, but misses out completely on the 8-cell configuration seen on 22500 (below). This is basically b'coz the hanger is fused into the superstructure and takes valuable space inside. They likely did not consider any "major" changes to the superstructure as they are still struck with the option of container based 8-cell configuration at the stern.
I have always wanted to remove these two stuffs and integrate the features of 22160 & 22500 into a single purposeful unit. 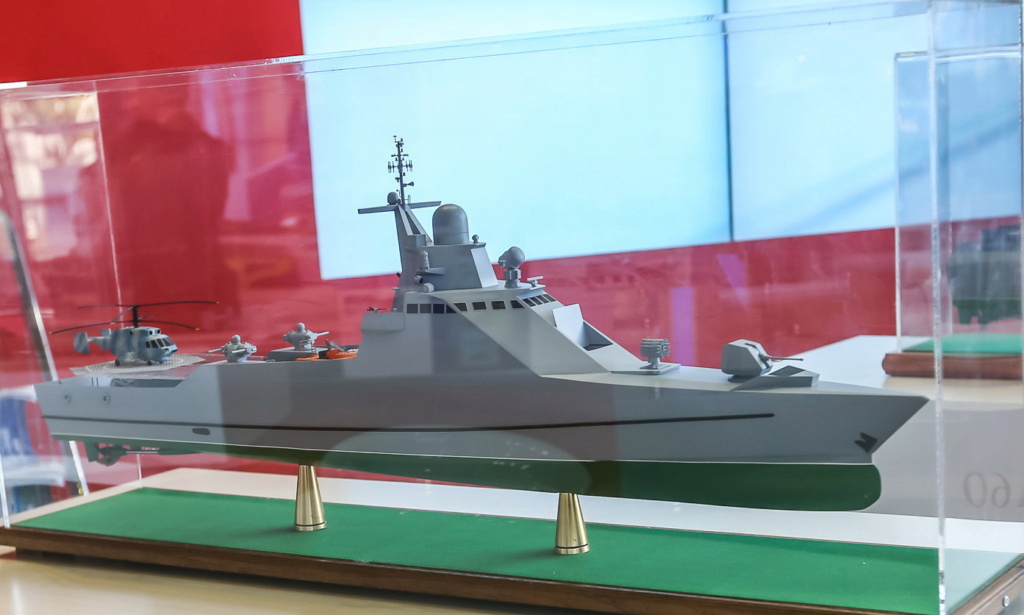 There are certain things that I have strong dislike for in the 22160 proposal (& the wasteful 20386). One of them is the container based silos.

I personally believe, any missile launches should be a one step process once everything is cleared. Open the hatch and Zooom!
Not a tedious 3-4 step process which involve helo deck clearing, opening the flight deck, opening the container, raising the silos to launch position to FINALLY fire the missile.
Its ok to utilize this method for ships which are not dedicated combat ships like landing/transport ships, but an utterly wasteful and ridiculous configuration for combat ships.


There is nothing groundbreaking in the configuration that I have illustrated below.
All the configuration was already illustrated in various models/brochures of 22160. I did the work of integrating it into a single unit.
For example - 8-cell configuration.
There was no chance for 8-cell to be configured transversely at the bow, as the lower decks doesn't have required beam (shorter AD silos can be accommodated). So they always showcased the 8-cell unit configured along the axis.

The main changes I made are -
1) pushed out the hanger completely from the superstructure to integrate a transverse 8-cell unit like 22500
2) done away completely with containerized launchers at the stern. 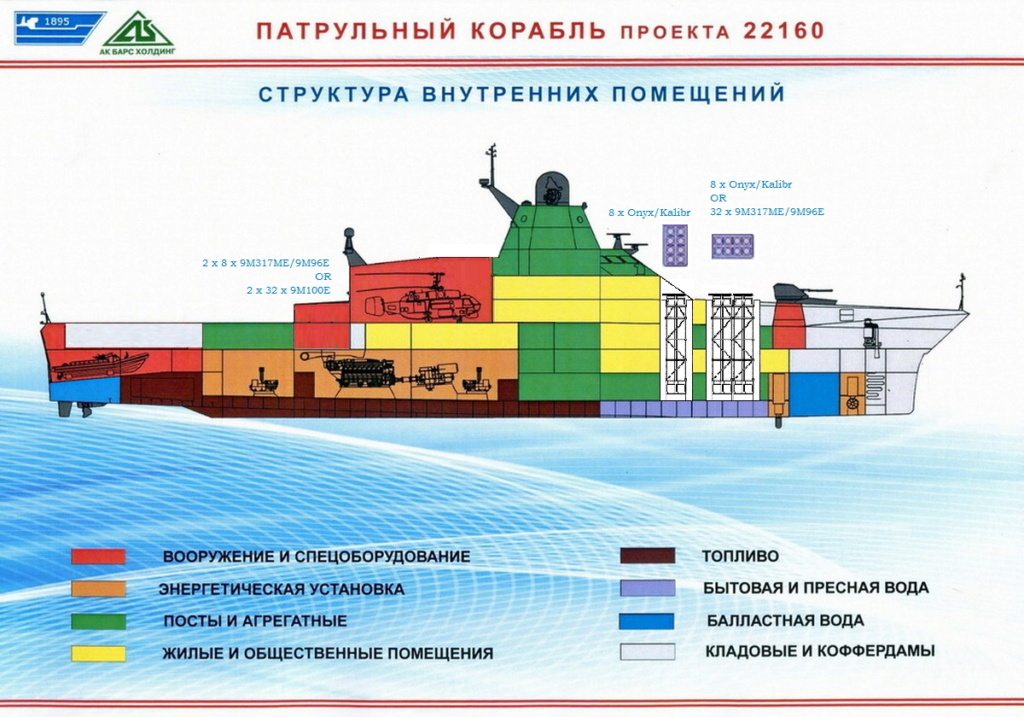 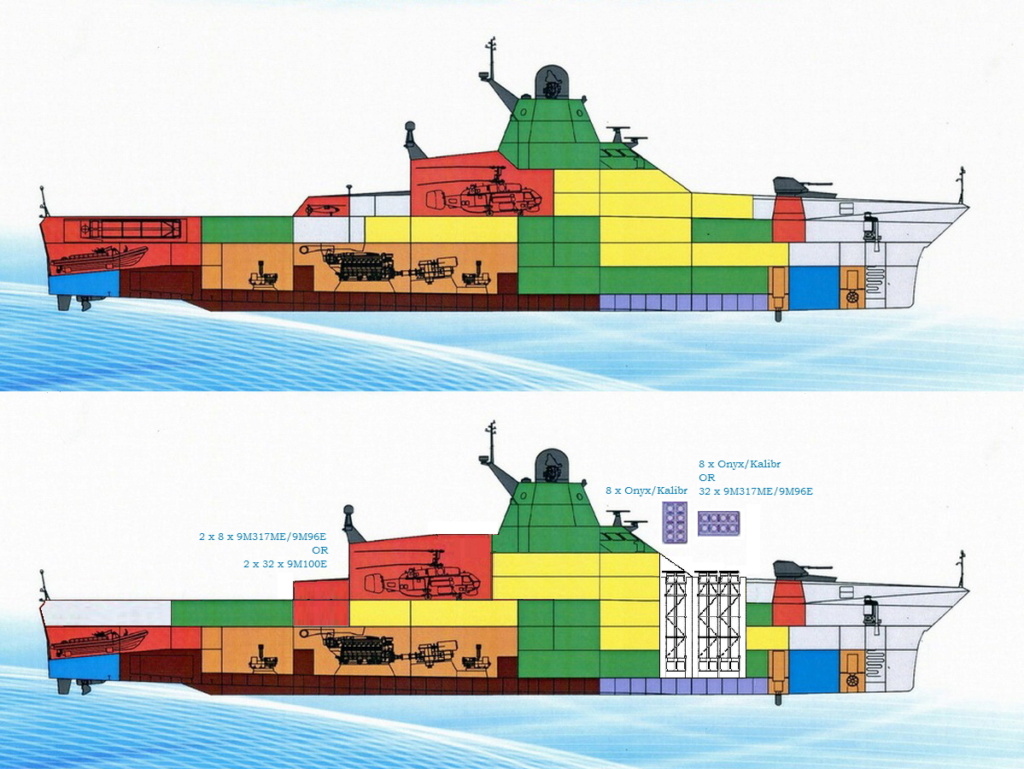 Is there any info available that details the current use of the hull space that you're allocating to VLS?  Crew accomodation? Galley? Provisions storage? Equipment room? I think its fair to say that its not a big empty void that is just waiting for a shiny pair of missile bins to be slipped in and bolted down. Stability considerations might also be important.
PapaDragon

Big_Gazza wrote:...Is there any info available that details the current use of the hull space that you're allocating to VLS?  Crew accomodation? Galley? Provisions storage? Equipment room? I think its fair to say that its not a big empty void that is just waiting for a shiny pair of missile bins to be slipped in and bolted down.  Stability considerations might also be important.

Currently its accommodation for marines, Navy requested that it be installed instead of originally planned AA system

Also UKSK can't be installed there, it can only fit AA VLS

Big_Gazza wrote:Is there any info available that details the current use of the hull space that you're allocating to VLS?  Crew accomodation? Galley? Provisions storage? Equipment room? I think its fair to say that its not a big empty void that is just waiting for a shiny pair of missile bins to be slipped in and bolted down.  Stability considerations might also be important.

I took that specific sectional self explanatory view from the brochure so as to avoid explaining much.
Green - various posts
Yellow - crew & other public spaces like galley..
Red - weapons/equipment related
I don't have any specific details regarding those shown in the brochure. So the readjustments of green/yellow was based on my thoughts.

But, anyone with careful observation will be able to get that the hanger fused into the superstructure is taking a lot of usable space due to which those spaces found residence further ahead.

Also, I don't know if you were actually serious when you asked about the crew, public & other spaces.
Are you saying that you never saw or came across the below illustration of 22160 with 16 x 9M96E?
What happened to those posts, crew and public spaces when those 16 cells was installed there?
Where did they go?
Are the internals so tight that there is hardly any space to rearrange/maneuver? 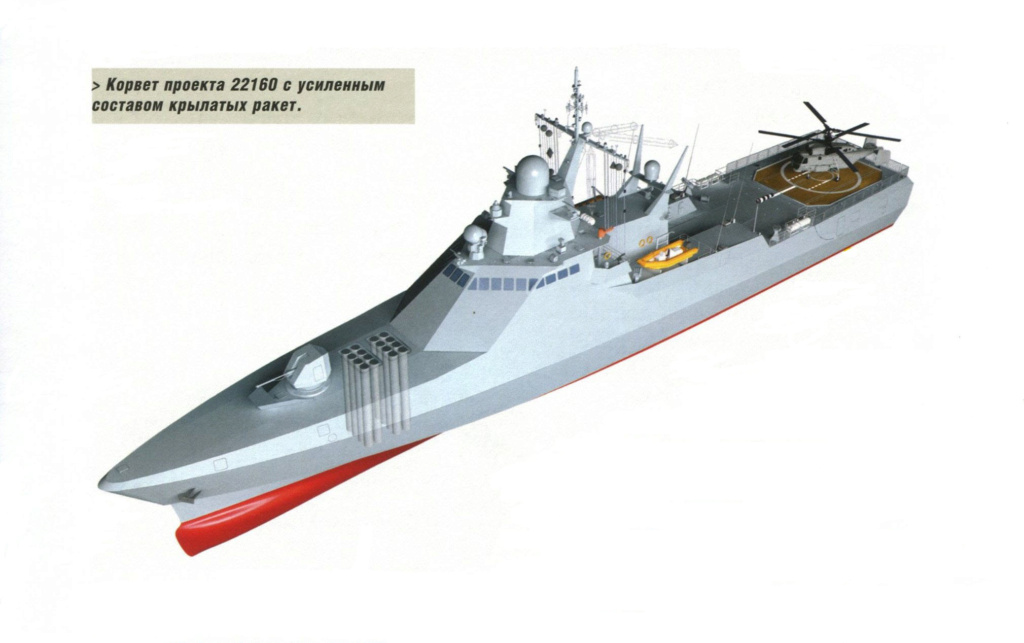 I just want to repeat one again that, what I illustrated in the above is nothing ground breaking and is a rough one based on the various models/CG/sketches of the 22160 and 22500 made available all these years.

Or lets say, I dug at the same "empty" spaces where the designers had already dug, to display their various configurations, to bolt down the shiny pair of missile bins.