Project 23550 Arctic patrol ship Ivan Papanin has been laid down in St. Petersburg

The laying down ceremony happened one day earlier than scheduled.
Second ship of the project 23550 class will be named: Nikolai Zubov.

April 19, 2017 at the JSC "Admiralteyskie Verfi" (the enterprise is part of the United Shipbuilding Corporation) in St. Petersburg, the ceremony of laying the head of the multi functional patrol ship of the ice class "Ivan Papanin" project 23550 (code "Arctic") for the Russian Navy, The serial number is 02460.

The solemn event was attended by the Commander-in-Chief of the Russian Navy Admiral Vladimir Korolev, Deputy General Director of Admiralty Shipyards Andrey Bystrov.

"Today we are present at a momentous event - the laying of the newest patrol ship of the ice class," Andrei Bystrov addressed the participants of the solemn ceremony. - Admiralty shipyards have always been a platform for the construction of high-tech science-intensive ships of a new type, and today's laying is a clear continuation of this tradition. We have no doubt that the new ship "Ivan Papanin" will be built in contract terms and with high quality. "

An important event in the history of the Navy and military shipbuilding was named by the commander-in-chief of the Russian Navy Admiral Vladimir Korolev: "This is a unique, multi-functional ship that is very necessary for the fleet. This year marks exactly 80 years with the organization of the first drifting station "North Pole", and the construction of a new patrol ship of the ice class will undoubtedly become a new stage in this direction. And we are sure that shipbuilders of the glorified Admiralty shipyards will once again successfully solve all the tasks set. "

The universal patrol ship of the ice class of the project 23550 Ivan Papanin, designed by the Almaz Central Design Bureau (part of the USC), will combine the functionality of the tug, patrol ship and icebreaker capable of overcoming ice up to 1.5m thick. The project refers to promising developments in the interests of the Navy .

The contract for the construction of a series of two patrol icebreakers was signed on April 25, 2016, the construction of the main ship began in September 2016. The head patrol ship of the ice class "Ivan Papanin" will be transferred to the Russian Navy after 2020.

The ship is designed to protect and monitor Arctic water resources; Convoying and towing to the port of detained vessels; Support and support of supply vessels; Participation in rescue operations; Transportation of special cargoes. A new multifunctional vessel is capable of effectively performing tasks in the Arctic zone both independently and as a part of groupings (detachments) of warships, and also to carry out escort functions on Arctic communications. In addition, Ivan Papanin has the necessary weapons for artillery strikes against sea, coastal and air targets. 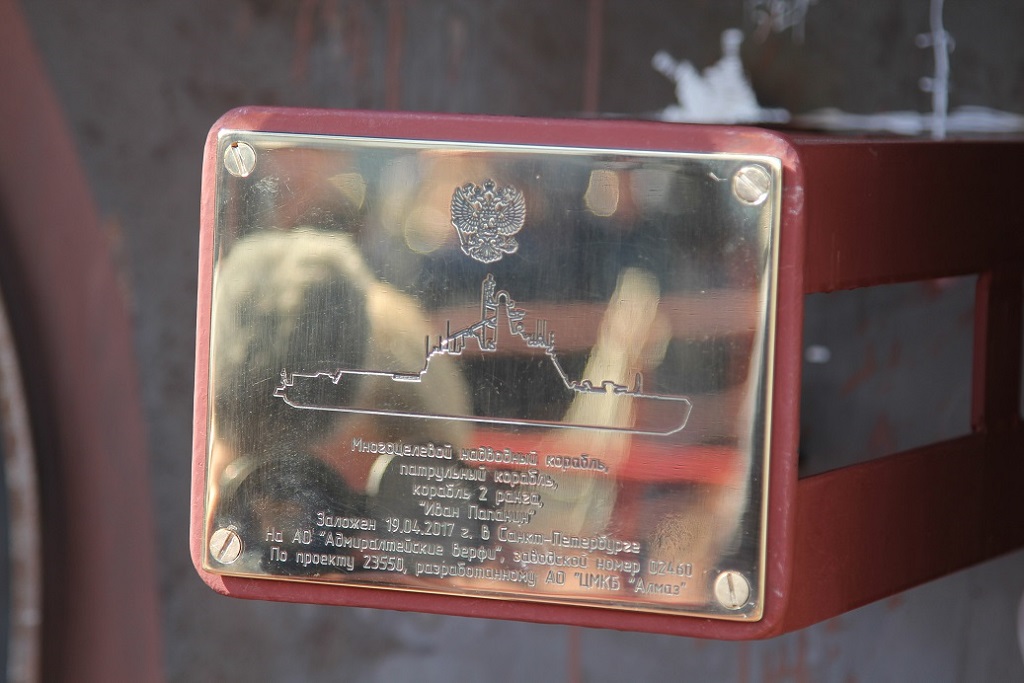 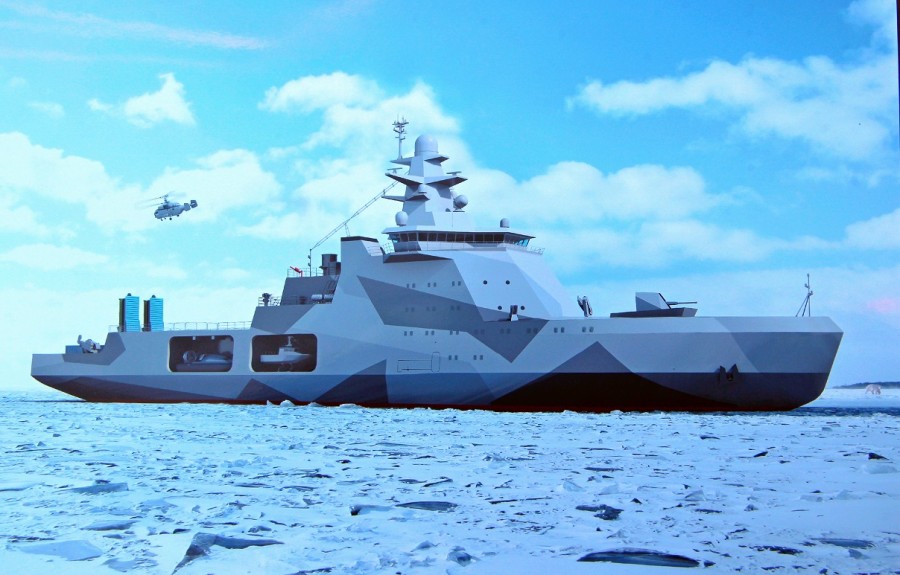 The question remains will Russia build more of this class then two?. I mean if they really wanna hold the most of the artic they will need more then two of these things.
PapaDragon

Look at this. UKSK containers stacked, 4 in total. How does it work anyway?

Also there seems to be door behind them leading under helipad. 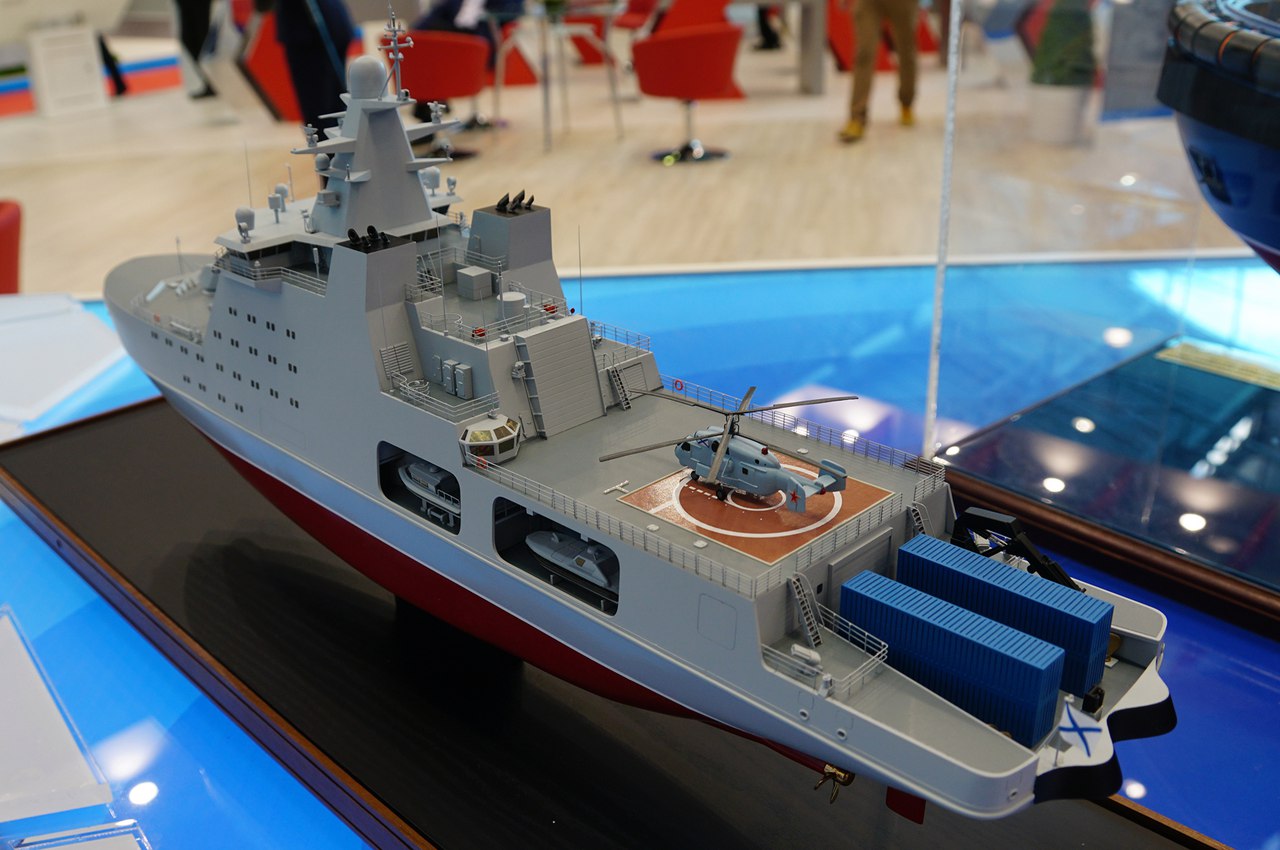 I am guessing after the top two have fired their missiles they are jettisoned off the rear and then next two can be fired, or perhaps they empty containers are lifted onto the helo deck while the next ones are fired and when all are fired they are returned to the rear area for transport home and reloading.

The location of that crane to the side appears to suggest over the side, if it can reach the further away container then it should be able to lift it up and backwards onto the helo deck... it is clearly designed to get containers from along side and presumably return them there when empty.
PapaDragon

GarryB wrote:I am guessing after the top two have fired their missiles they are jettisoned off the rear and then next two can be fired, or perhaps they empty containers are lifted onto the helo deck while the next ones are fired and when all are fired they are returned to the rear area for transport home and reloading.

The location of that crane to the side appears to suggest over the side, if it can reach the further away container then it should be able to lift it up and backwards onto the helo deck... it is clearly designed to get containers from along side and presumably return them there when empty.

I dunno, seems wasteful and slow. Those containers are more complex than they look.

And there seems to be enough space to just put all 4 next to each other.
hoom

The container carrying is probably intended for more than just Kalibr, like for running supplies to Russian Arctic bases -> stacked = more supplies.
But containerised Kalibr does need more than just 2 containers, I think you need at least one control container.
Singular_Transform

There is a crane on the side, maybe the empty container can be wasted into the ocean.
PapaDragon

Singular_Transform wrote:There is a crane on the side, maybe the empty container can be wasted into the ocean.

Still those containers are not really cheap. Dumping them into the ocean is ineffective and slow.

I think Hoom is right, this is probably supply setup.
GarryB

Still those containers are not really cheap. Dumping them into the ocean is ineffective and slow.

It would also be a shipping hazard... lots of ships lose shipping crates every year in storms and many other ships are damaged running into semi submerged crates...

I would say loading the top ones with ready to fire missiles and the lower crates with other things... would be odd... are you on an attack/strike mission or a resupply mission?

I suspect more likely that when used for missile strikes only two crates are carried or more are carried side by side in one layer. When used for supporting operations crates can be stacked to allow more equipment/supplies to be carried.

Of course all four crates could carry missiles... they might be intended to be layed in the sea to launch missiles on command like a mine, or they could be delivered to a port and taken inland by truck to launch their missiles.

Or they might just be transport containers... very sneaky.
George1

As reported on March 21, 2018 by RIA Novosti agency, the transfer of patrol ships of project 23550 was shifted to 2023-2024 due to problems with financing. This was stated to journalists on Wednesday by the general director of the Admiralty Shipyards Alexander Buzakov. 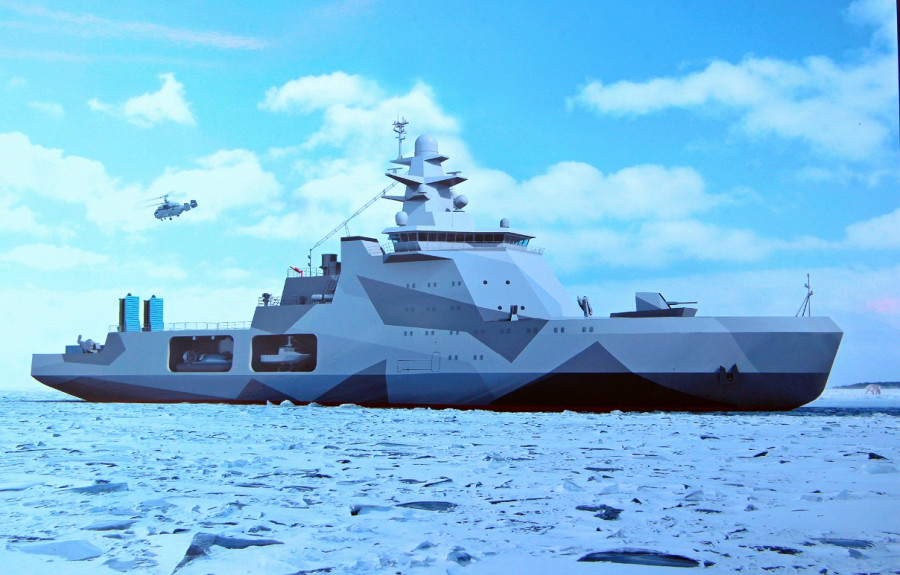 The official image of a multifunctional patrol ship of the ice class of the project 23550. Drawing from the poster from the ceremony of laying the head ship "Ivan Papanin" at the Admiralty Shipyards JSC 19.04.2017 (c)

Buzakov noted that all the current projects of the "Admiralty Shipyards" are on schedule, while the descent of any ships in 2018, the company does not plan.

In 2016, the Russian Ministry of Defense ordered two patrol ships of the ice class of Project 23550 from the Admiralteiskiye Verfi Enterprise. They were to be transferred to the Navy by the end of 2020. The ships of this project will combine the qualities of a tug, an ice breaker and a patrol ship.

So there will be another Gorshkov situation here, by the time they are finished they will already be obsolete

This can not be anything else then deliberate sabotage and obstructionism. Whenever Russian shipyards need to complete contract for foreign or civil buyer everything is more or less in time, but if it is contract for Russian defence delays never fucking end, and nothing with displacement above 1000 t can be completed even remotely on time. At this point it must be clear this is deliberate and FSB should get involved.
miketheterrible

Just as an FYI, USC or shipyard cannot make these decisions on their own, and I would wait until government states.  Reason is, all contractual agreements are now made with a clause stating that the agreement delivery date is in mind, and if failed to do so, the shipyard can be taken to court.  In this regard, if they "ran out of money" it would have been on the shipyard ends fault because they are negotiated prices too low or underestimated the project, in either case, also their fault.

Only time a project can be extended in such case, is if the MoD agreed to it.  If they agreed to it, then they must be allocating money to other, more vital projects.

There is also the idea that the shipyard may be trying to siphon more money from the mod with these statements, as they tend to do this with same common method (tell journalists first).
Tsavo Lion

If this class successful, more units may be built, incl. for export.
George1

According to the web resource Mil.Press FlotProm, the lead patrol ship of the Arctic zone of the project 23550 "Ivan Papanin" will be launched at the end of 2019, the transfer to the fleet under the contract - 2023. About this on Wednesday, April 10, 2019, said the general director of the Admiralty Shipyards, Alexander Buzakov, answering a question during the groundbreaking ceremony for the ice-resistant, self-propelled North Pole platform. 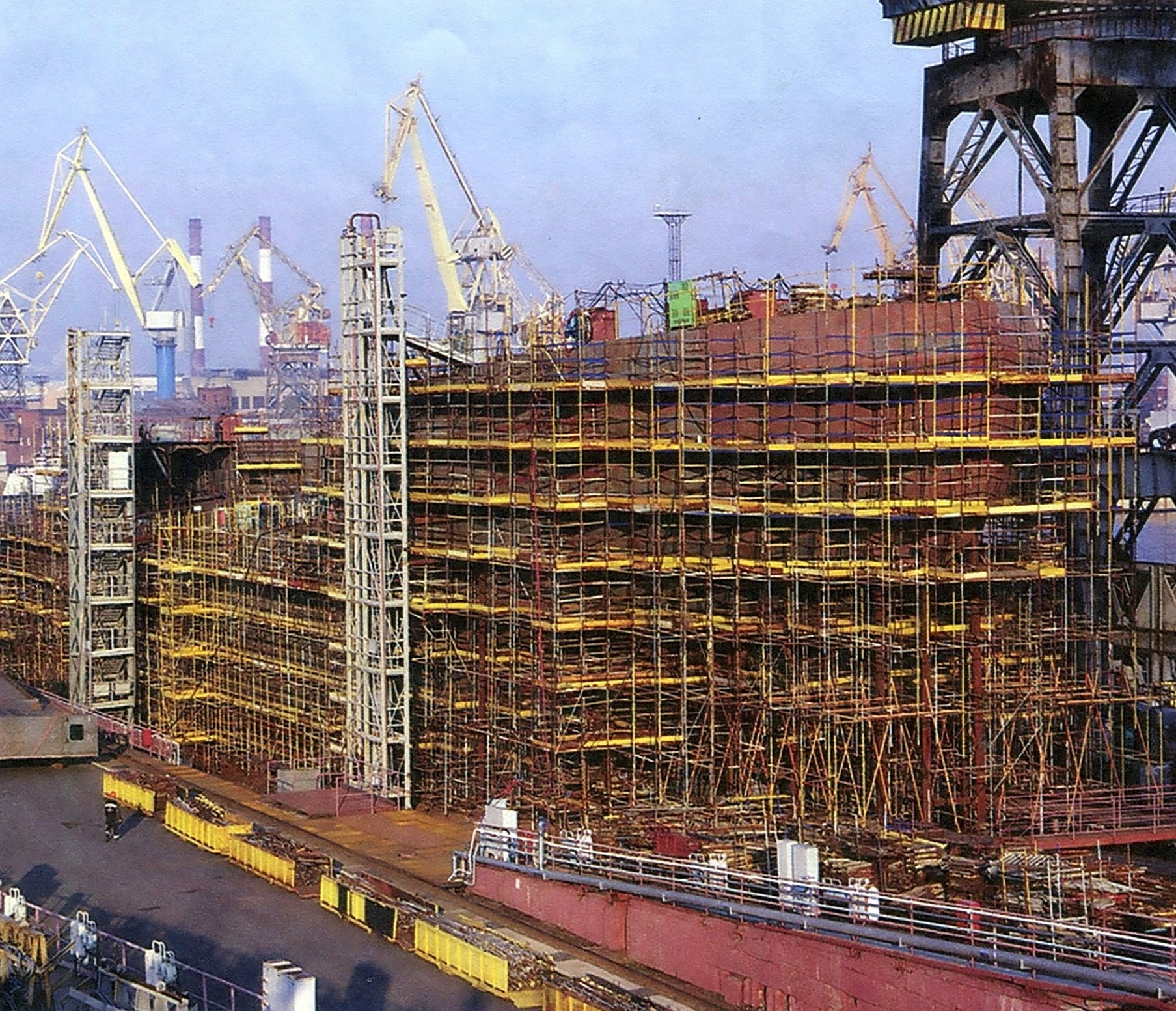 According to him, the second patrol icebreaker of the project 23550 "Nikolay Zubov" will be commissioned in 2024. The sections are completely manufactured, after launching the lead ship, the formation of the hull of the first production icebreaker patrol will begin.

Recall that the bookmark of this ship previously moved to 2020.

The laying of the second patrol icebreaker "Nikolai Zubov" was scheduled for the spring of 2018. It was assumed that its construction will be completed in 2020. But in March 2018, Alexander Buzakov admitted that the program for the transfer of patrol icebreakers was shifted by about four years. 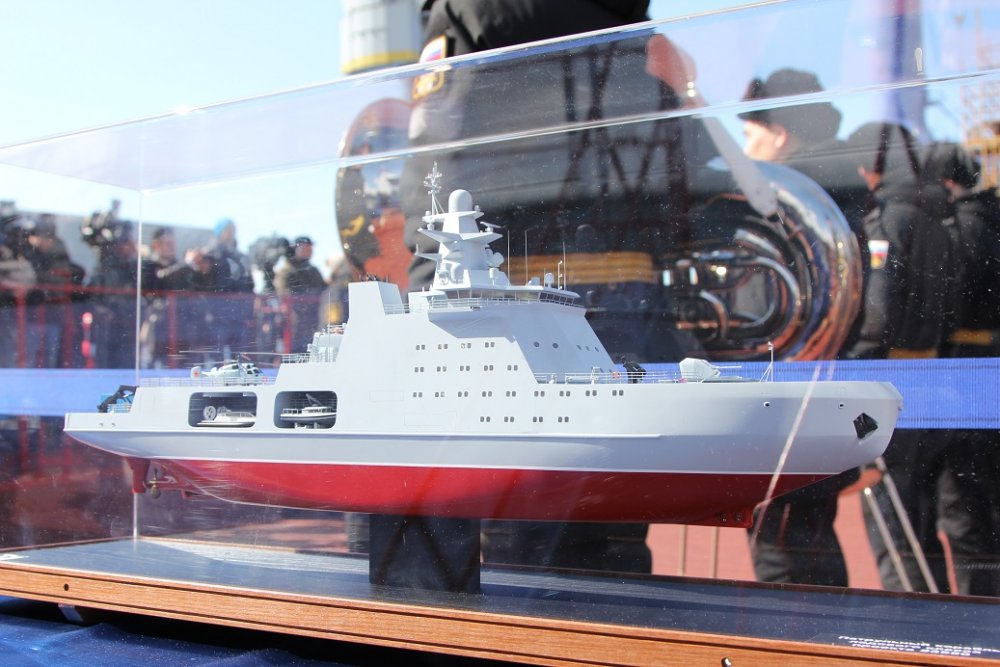 Nice to hear that these ships are back on the menu 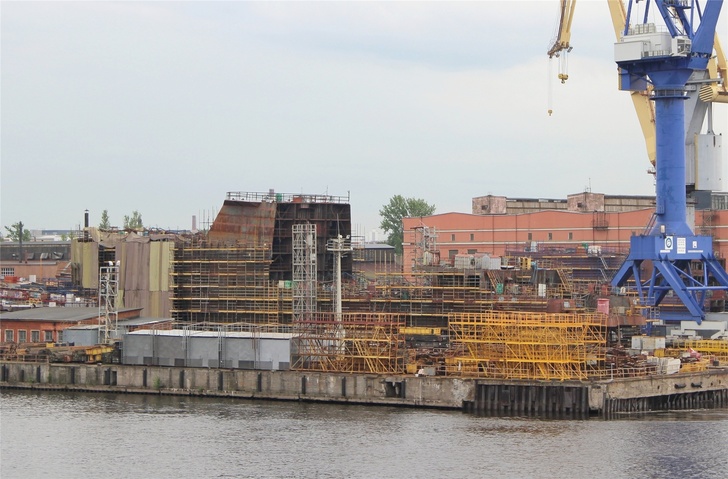 Well this started happening fast, another photo, looks lot further along than anyone expected 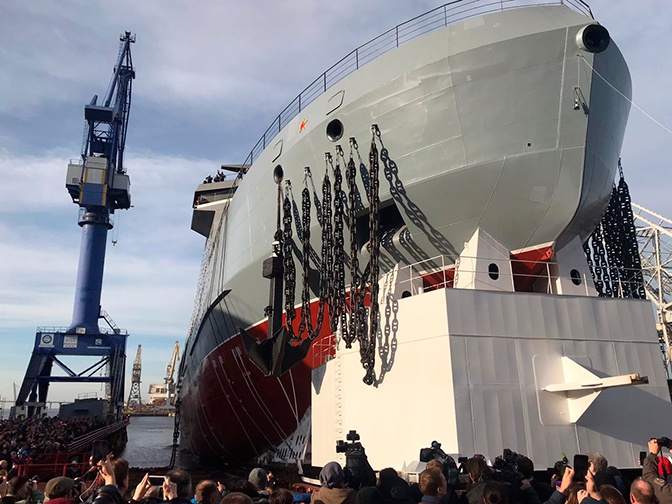 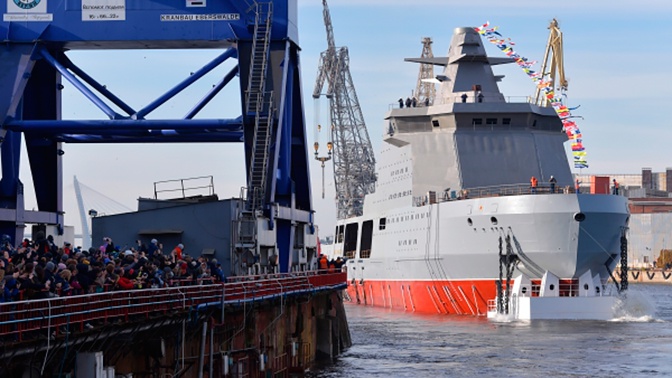 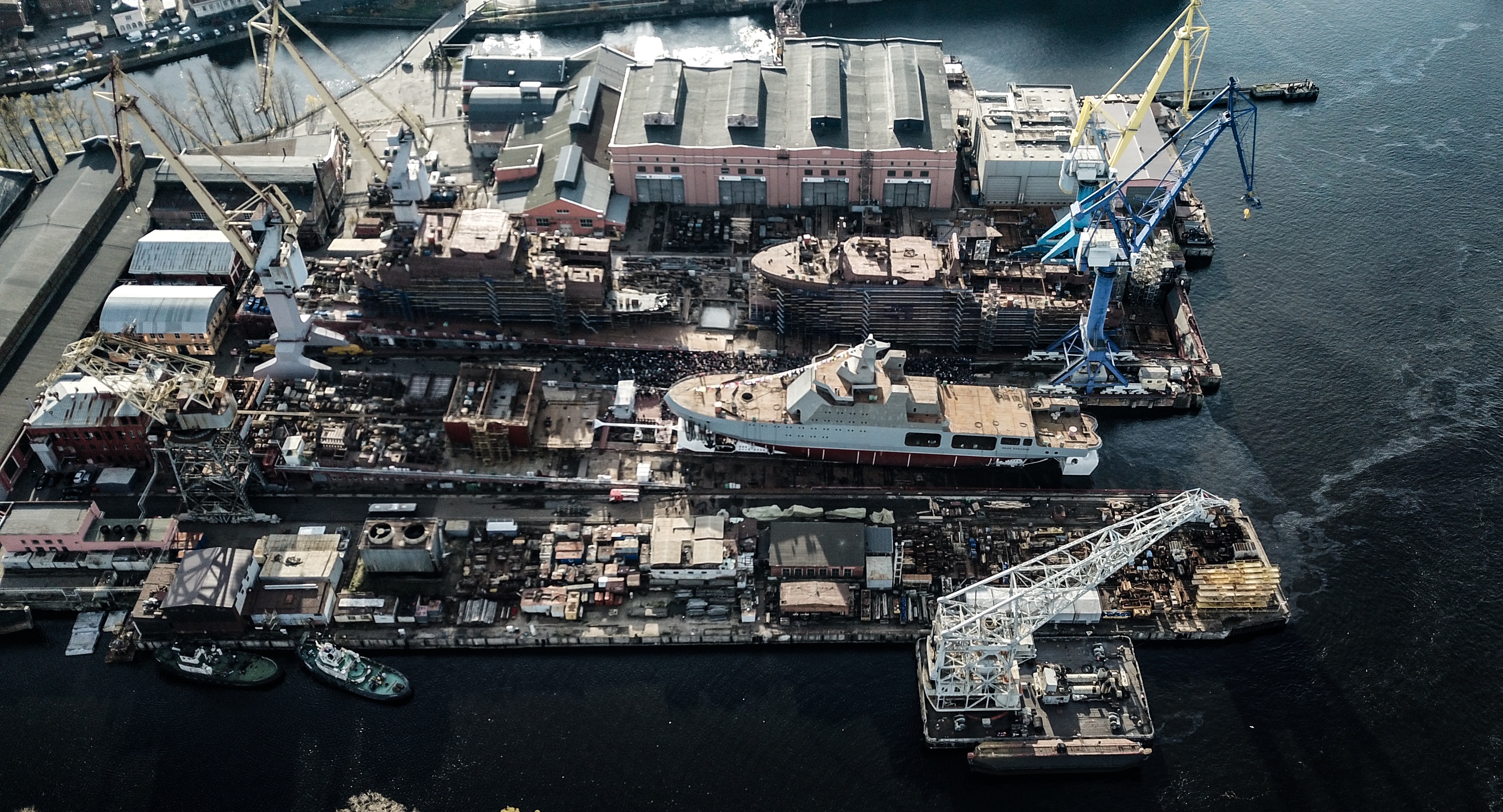 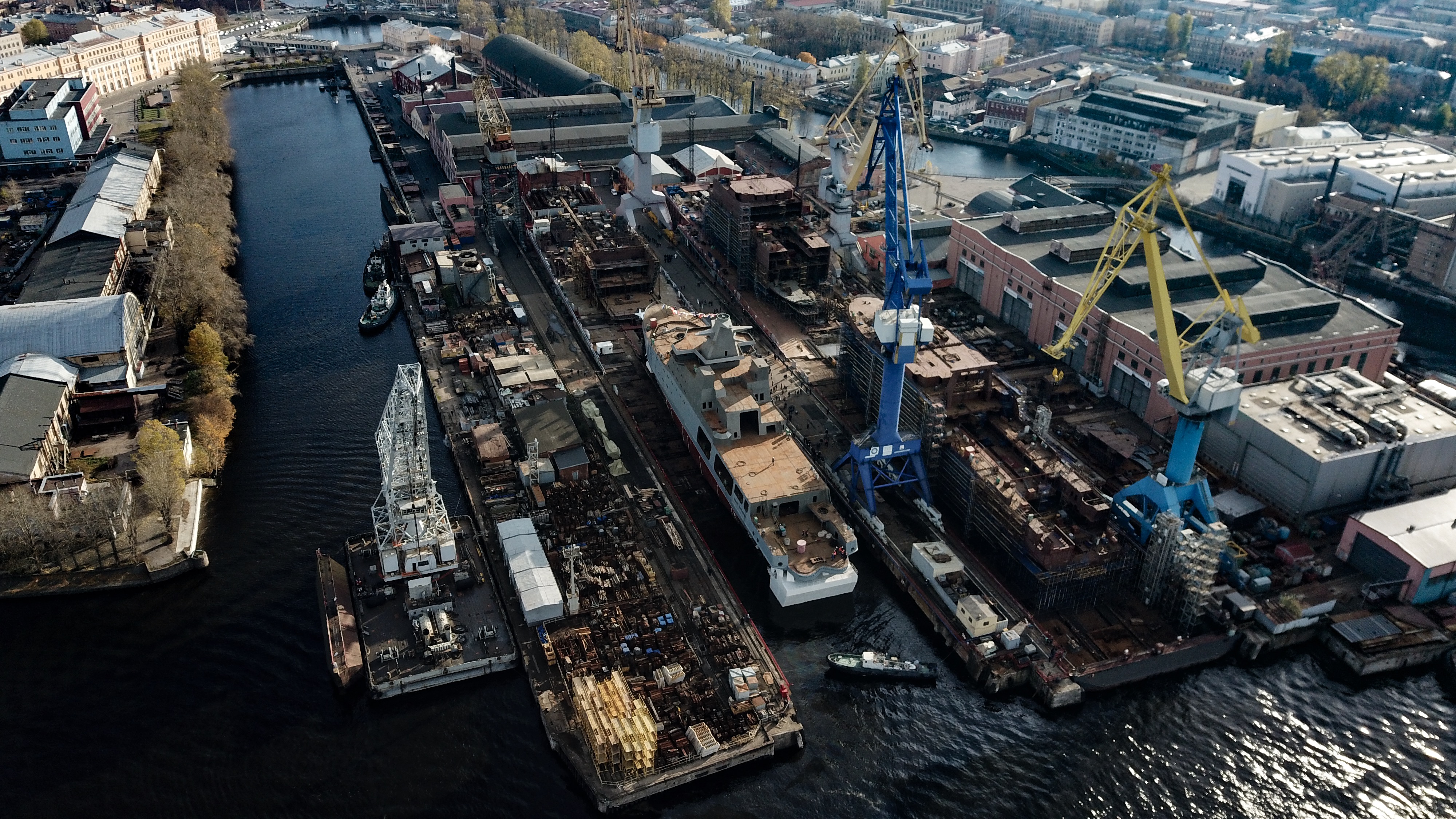 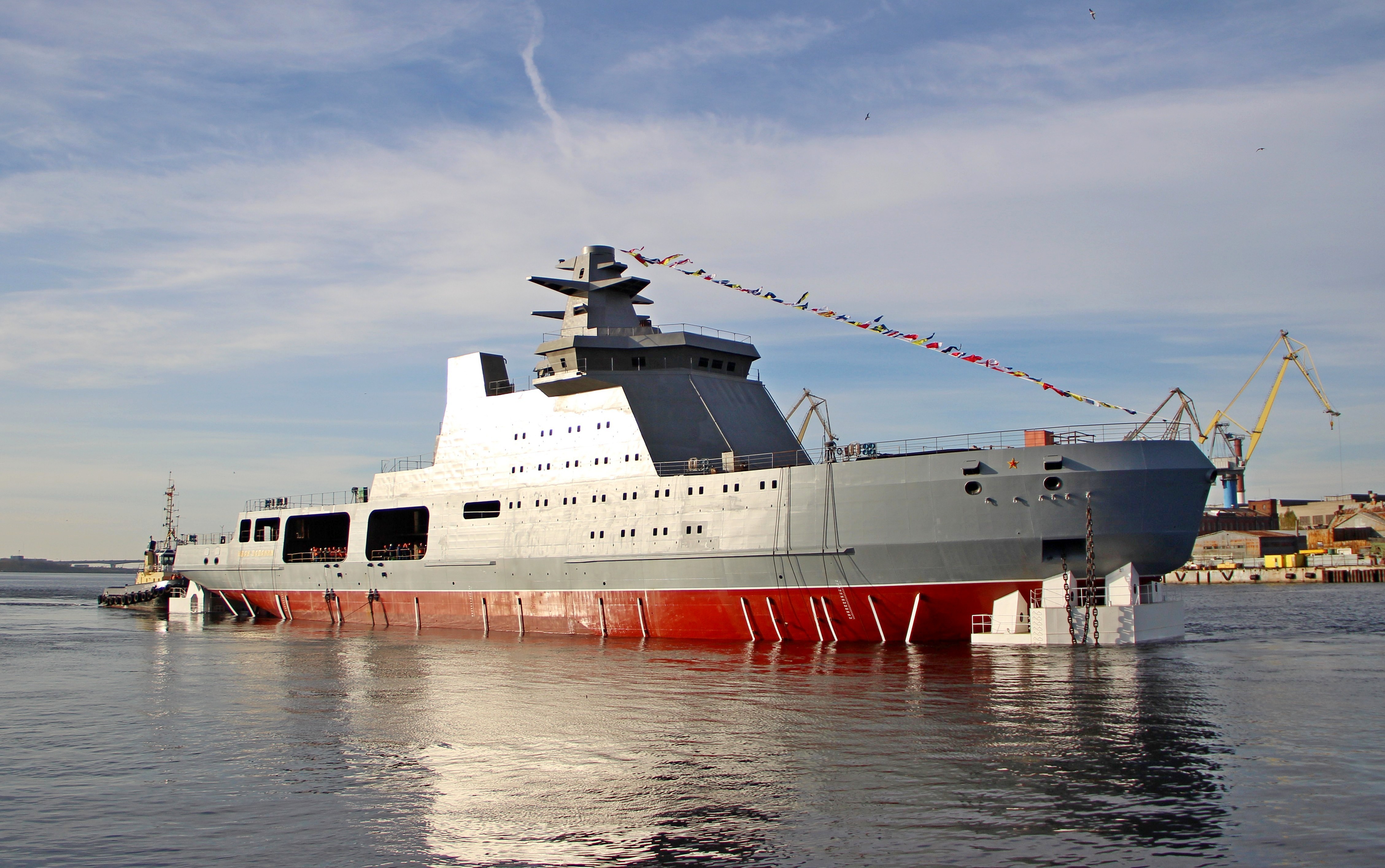 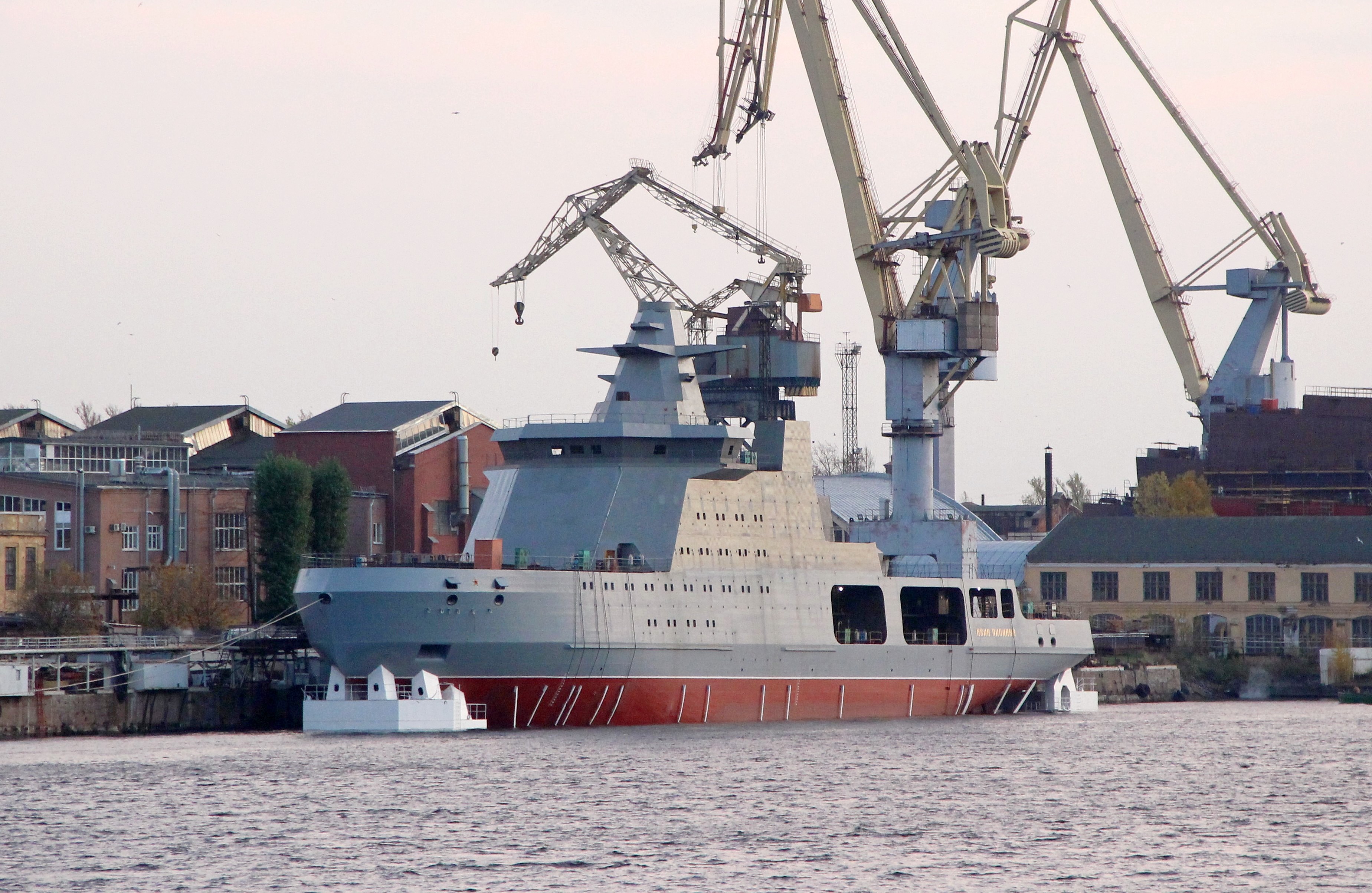 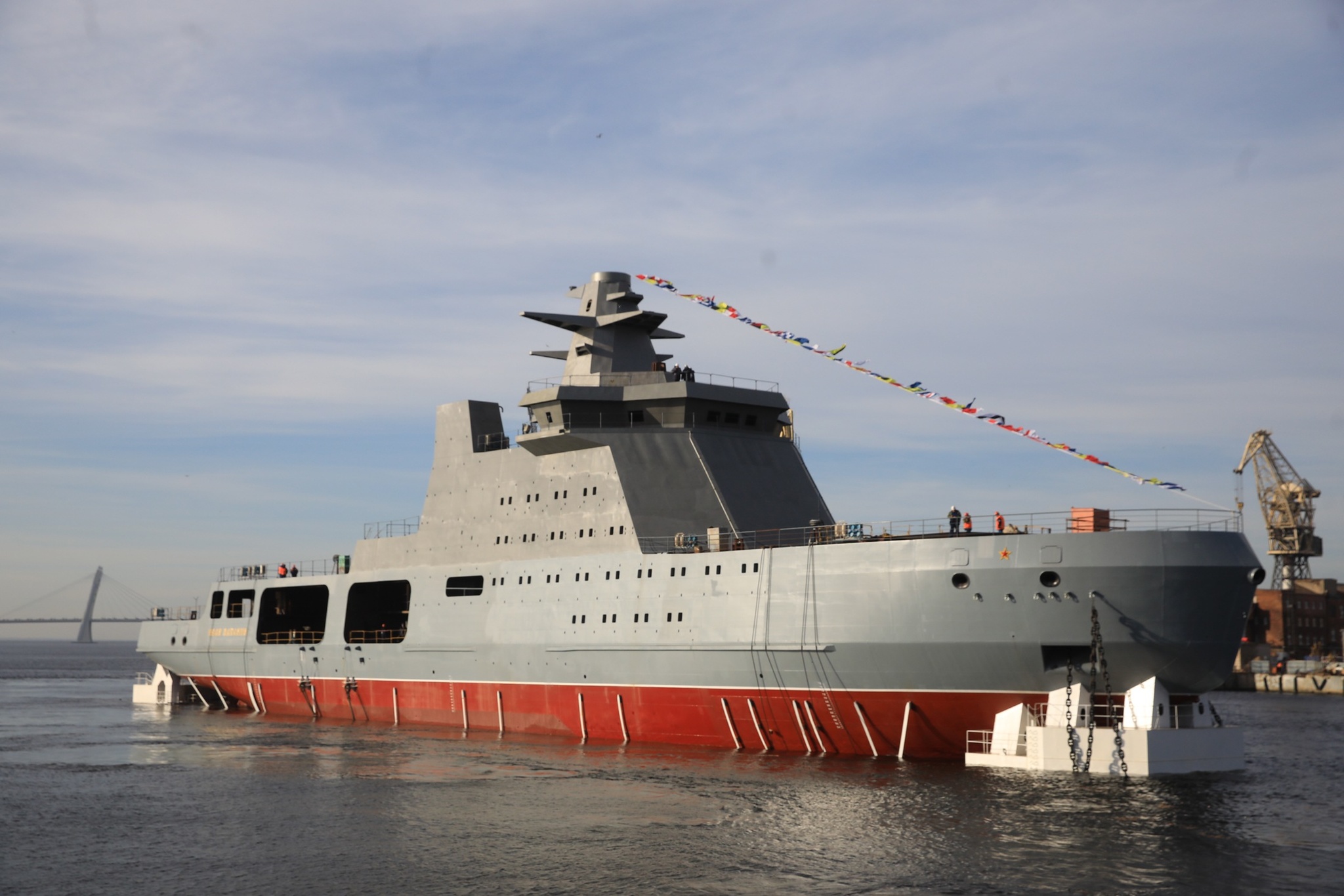 What´s the purpose of the other to ships in the first pics? Fish trawlers?
PapaDragon

Hole wrote:What´s the purpose of the other to ships in the first pics? Fish trawlers?