I have to say I am a little disappointed with the gun on the new helicopter... I was hoping they would take away the ammo magazines mounted on each side of the gun and have belt feeds leading off each side of the gun to flat ammo areas under the belly of the aircraft to hold larger numbers of shells.

Especially with the new command detonation rounds I would think carrying a lot of ready to use ammo would be useful.

Sounds like its aiming mechanism is improved and made lighter, but its ammo capacity has not be increased.

The pilot's cabin of the Mi-28N attack helicopter. 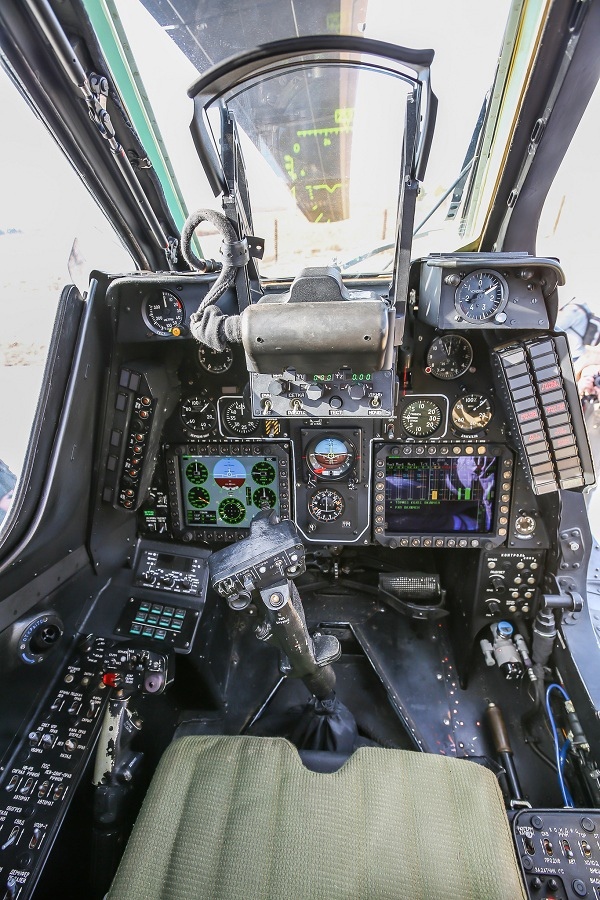 The air and space forces will receive helicopters with unmanned killers. The Ministry of Defense has approved a plan for purchasing avionics for the latest Mi-28NM Night Superokhotnik combat helicopters. 80 of the first production rotorcraft will receive a drone control system, thanks to which helicopter crews will be able to control both medium reconnaissance UAVs and disposable kamikaze drones at a distance of tens of kilometers. According to experts, such a bundle radically increases the combat capabilities of Russian military aviation, making rotorcraft less vulnerable.

As sources in the military department told Izvestia, the composition of the on-board equipment of the latest Mi-28NM helicopters has already been approved. The agency also pre-approved the procurement plan. So, for the serial "Night Superokhotniks" under construction, 80 sets of AS-UAV equipment for communication with UAVs have already been ordered (the purchase document is available to Izvestia). Each of these sets allows you to communicate with drones at a distance of up to 50 km and has a bandwidth of 5.4 Mbit/s, sufficient for real-time video transmission.

In total, the Ministry of Defense has signed contracts for the purchase of 96 such rotorcraft. It is planned to produce them and deliver them to the troops by the end of 2027.

Earlier, Vitaly Shcherbina, chief designer of the Combat Helicopters program at the Mil and Kamov National Center for Helicopter Engineering, noted that the technical specification for the development of the Mi-28NM provided for its interface with medium-range UAVs of the Korsar and Forpost-R types. In addition, he spoke about plans to include kamikaze drones controlled from a rotary-wing vehicle in the armament. At the end of last year, Defense Minister Sergei Shoigu said that the upgraded Mi-28NM was tested in combat operation on the territory of the Syrian Arab Republic.

"Controlling drones from a helicopter can radically improve the efficiency of army aviation" military expert Vladislav Shurygin told Izvestia. - Adding the ability to control drones will change the tactics of using helicopters on the battlefield. Previously, the rotorcraft needed to establish visual contact with the target, and therefore become visible itself. Now, the latest Mi-28NM can be turned into a weapon that will deliver targeted strikes from over the horizon, by external guidance from the ground or from drones, while remaining invulnerable to return fire.

According to the chief designer, interaction with drones will allow the helicopter to monitor a given area without entering the air defense zones, provide target designation for new long-range missiles and monitor the effectiveness of their use in real time.

Several models of disposable kamikaze drones are currently being developed in Russia. Some of them have already been tested in real combat conditions in Syria. Earlier, video footage of the destruction of a moving car with militants by such a Lancet UAV, as well as the destruction of a ground firing point, was already shown. This ammunition has the ability to be guided both through its own optics and with the help of another drone, so it can also be adapted to control from a helicopter.

Another device that the Mi-28NM will be able to communicate with is the half-ton Forpost-R. This is a fully localized and improved version of the licensed Israeli medium-range reconnaissance drone Searcher Mk II. After "Russification", its configuration was seriously changed. The basic version of the "Forpost" did not have the equipment necessary for interaction with aviation. The new UAV, unlike the source code, will also have the ability to use weapons.

Another candidate for interaction with the helicopter will be the domestic Korsar UAV. With a take-off weight of 200 kg, it is noticeably smaller in size than the "Forpost". But, in addition to reconnaissance tasks, this UAV is also capable of carrying light bombs and highlighting targets with a laser to hit them with artillery and aviation weapons. 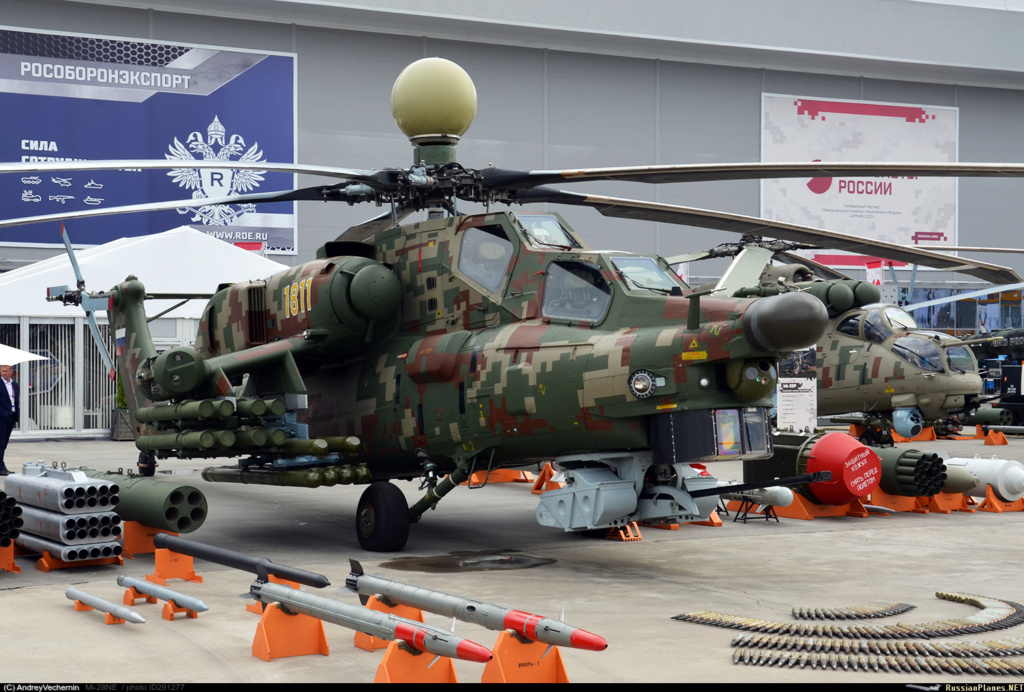 Note Vikhr is a fully multirole missile.... there are air to air models of Ataka, but the Vikhr has a switch in the cockpit to change from HEAT to HE FRAG warhead options for hard and soft targets respectively... Its 610m/s flight speed and 10km range makes it more potent than a MANPADS used in the same role too.

Not to forget the radar pod on the right side, with the huge red cover.
GarryB

That would be for Khrisantema, though such missiles still have a backup laser beam riding guidance like the newer models of Ataka and Shturm.

This version of the Mi-28 retains the thimble nose so it can probably still operate the command guided missiles, which is rather interesting.

The Khrisantema uses radar guidance but I think it is more SARH than ARH to keep costs down, but in any case it seems effective enough and cheap enough to actually use.

The difference is that radar waves are all weather day and night and are not effected by rain or snow or dust etc etc.

The command guided Soviet missiles... Shturm and Ataka as well as older missiles like the AT-2 were faster because they didn't need to drag a wire, and the helicopter was free to manouver without fear of catching or snapping a control wire, but the targets were optically detected and optically tracked but course correction commands were sent via coded radio command.

Using the mast mounted radar to detect and track targets removes optics from the loop, though IIR and digital optics could still be used to identify the target in good weather and day or night, but even if the target pops smoke if it is being tracked by radar and commands to guide the missile come from the radar or the command thimble then smoke wont stop these missiles and they will become as bad weather capable as the more expensive newer Khrisantema... though the latter has a larger calibre warhead and better penetration.

Was hoping they would modify the mast mounted radar to control the new missiles, but it seems the new pod is still needed.

Of course this isn't an Mi-28NM because it still has the thimble nose fairing... so maybe it still needs it and the Mi-28NM does not with a newer radar???

Just me being wishful though.
limb

Has the Mi-28 or Ka-52 ever used the khrizantema? Its far more effective than the ataka V. Its also wierd that theyre never advertised with the khrizantema, which implies its not integrated on the helicopters, but that doesnt make sense.

Imagine the atakas being all HE, while the Vikhrs are HEAT. That way the Mi-28 can obliterate multiple soft targets with precision from a distance with much more efficiency than with rocket pods
GarryB

It would be hard to tell Khrisantema from Ataka from a distance... the difference is the calibre of the tube... and I seem to remember them testing Khrisantema on helicopters before... it was obvious because they had to use that radar pod in that case... which negates the advantage of the weapon because while they can be loaded 8 missiles to a pylon like Ataka and Shturm, you lose a pylon to carry the targeting pod.

My understanding is that the air launched Ataka has a range of about 7km and an anti armour performance of about 800mm penetration... which is probably good enough most of the time. The missiles are supersonic at about 450m/s which means you don't have to hang around a long time guiding them to the target.

The newer missiles are all focused on extending engagement ranges, but for many jobs these missiles are just fine... they are accurate enough and they are cheap to use in enormous numbers.

The Vikhrs are dual use... their warheads can be set to HEFRAG or HEAT at launch with the flick of a switch (I presume it activates which detonators are used to determine how it explodes).

I would carrying 8 HEAT equipped Atakas and 8 HE Frag Atakas together with 12 Vikhrs would be a good combination and mix... the Vikhrs would be useful Igla replacements in terms of shooting down enemy aircraft and heavy armour, while the Atakas would be good for lighter vehicles and unarmoured vehicles and drones.

The assembly process of the Mi-28NE export attack helicopter 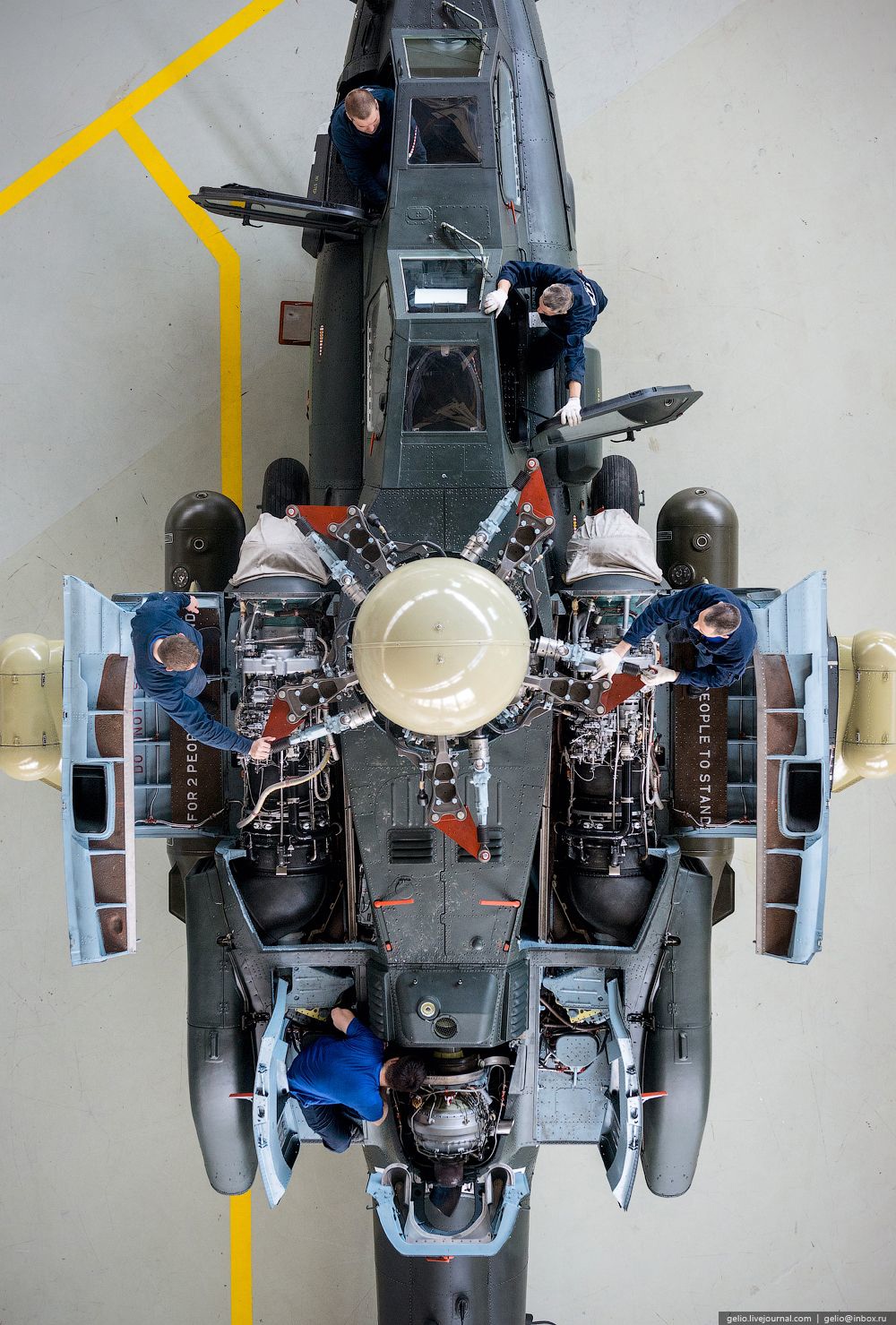 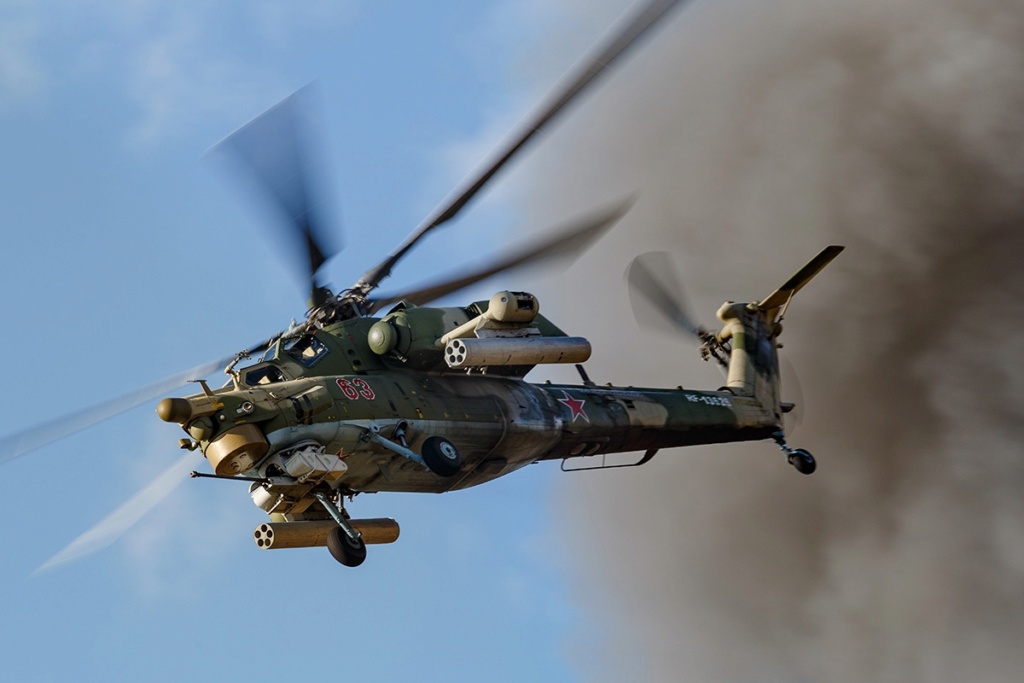 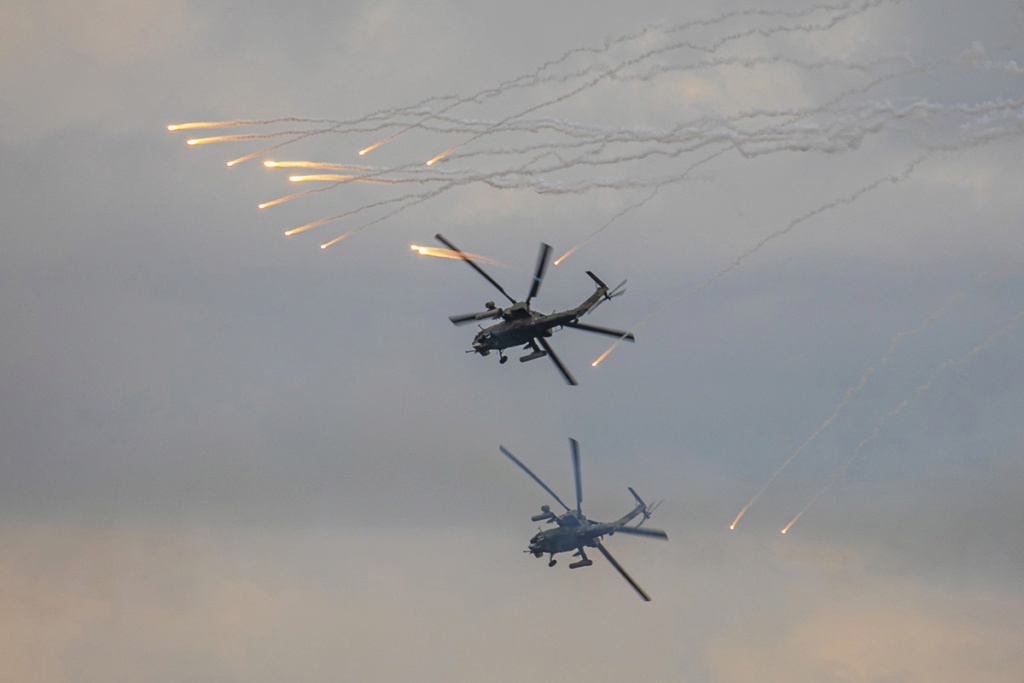 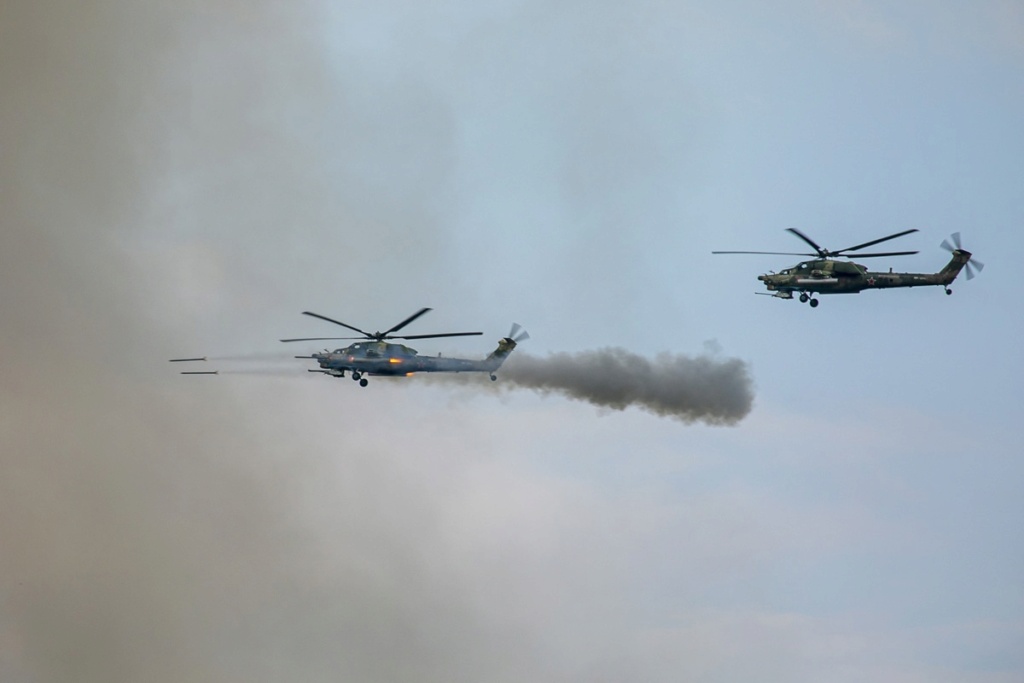 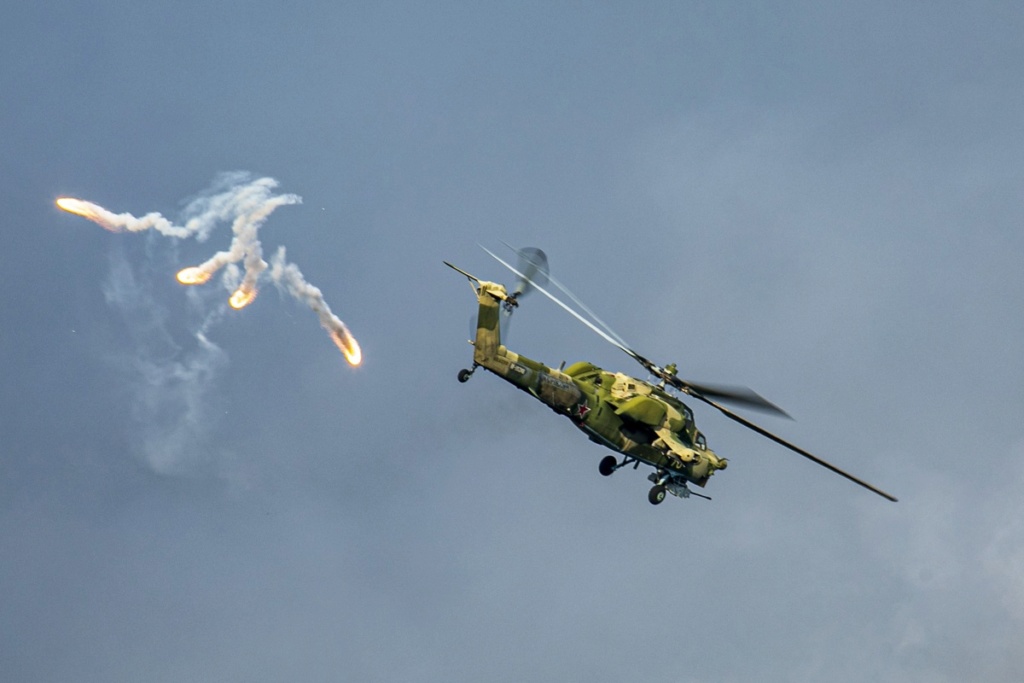 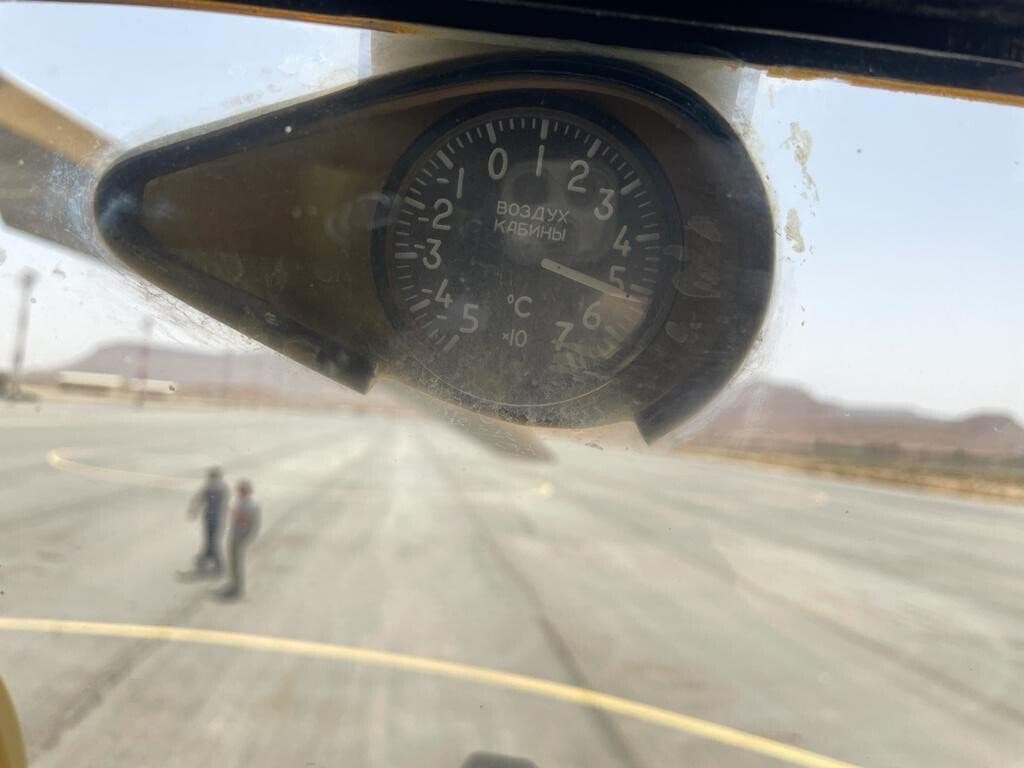