Do you think they are all operating from airfields sitting on the side of the runway waiting to be refuelled and launched to attack enemy targets and then land back on the runway and sit and wait for the next mission?

As soon as this conflict started any plane they could they would have dispersed as much as they could.... farms are handy because they often have big sheds to hide aircraft and vehicles in that tow the vehicles from where they are stored to where they take off and land from and back... taking off and landing could be any stretch of motorway nearby.

Towing a Flanker out to take off and it gets spotted and hit and it burns... unhitch the towing vehicle and cover the towing and wheel marks on the ground and then take photos... or eliminate the towing marks using photoshop and post the image with red stars added... not hard... not a lot to change.

Remember this is war and they are losing in the field so they have to win online.

You missed the picture showing half a dozen aircraft destroyed in the same place...


They clearly didn't do anything like spreading them. At least not enough.
GarryB

If you look closely those aircraft were in rivetments... they were surrounded by dirt walls and not openly parked on a flight line.

GarryB wrote:If you look closely those aircraft were in rivetments... they were surrounded by dirt walls and not openly parked on a flight line.

They need to space them and use at least soft hangar so that shrapnels from one hit don't destroy plenty of planes.

A direct hit will destroy even a reinforced hangar so there is no need for them. But a hangar even a civilian one will still contain an explosion and protect the other aircraft.

Those walls made out sand or dirt were good when they had 11000 mig-21 or 20000 il-2 during world war. But now the number of aircraft is too low so thry need something better.
GarryB

With an enemy actively trying to destroy your aircraft nothing would help... unless you believe your enemy are idiots which makes you an idiot.

We don't know what happened exactly so claiming putting them each in armoured hangars would have somehow saved them is just bullshit.

These were also old Su-24s and Su-30s so not really relevant to this thread.


They need to space them and use at least soft hangar so that shrapnels from one hit don't destroy plenty of planes.


A direct hit will destroy even a reinforced hangar so there is no need for them. But a hangar even a civilian one will still contain an explosion and protect the other aircraft.

A civilian sheet metal hangar will not stop fragments of any kind and tend to do nothing at all to contain any explosion of any type.


Those walls made out sand or dirt were good when they had 11000 mig-21 or 20000 il-2 during world war. But now the number of aircraft is too low so thry need something better.

That is what you are claiming but as we don't know what happened I am not sure you can claim that to be true. 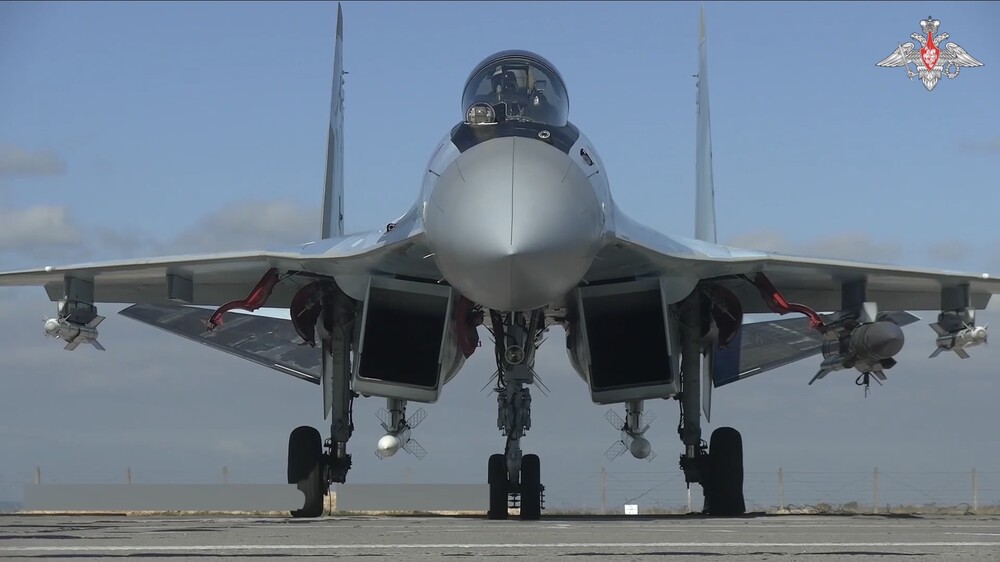 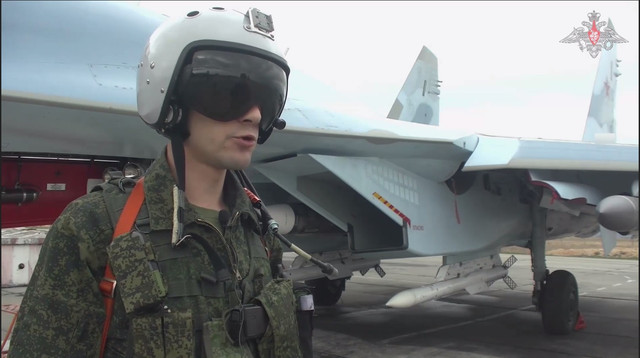 Looks like we can finally confirm use of R-37M on the Su-35. Note the X-31 on the wing and the clear differences. With the next image it can be seen by the fins down the center line that at least one R-37M is being carried under the belly. Btw impressive multirole loadout. One or two long range air to air missiles. Two medium range missiles. Two short range IR missiles, and a kh-31 for anti radar work. The thing is a dangerous beast.

Edit: I had to rewrite the weird sentence I wrote.

Is that ready for takeoff or just landed?

I would have expected a balanced load of two Kh-31s and seeing that image would guess one had been used on its mission, while the other missiles would be in case an enemy aircraft was spotted.

An air patrol mission with two centreline long range AAMs, two medium range AAMs, and two dogfight short range AAMs and two anti radiation missiles incase an enemy air defence system tries to have a go... but the wing pylon adaptor the other Kh-31 would be fitted to is not there... just an empty pylon so maybe in a flight of four aircraft they only anticipate one enemy SAM system each?

Are you ready for this?

EDIT: Note  the comment by Isos below. Its interesting that the Su-35 was chosen as the aircraft to replicate.

Are you serious ? That's RC toys.

The real plane is heavier than that so they would not be that responsive, but with thrust vectoring engines there is no reason why the real aircraft couldn't do that... though I doubt they could get that flight display past the airshow officials...
Tsavo Lion

What do u think of this?
GarryB

I think it is Americans desperately trying to cope with reality... and failing.

It seems, looking at the comments that one F-35 would wipe the floor with Russia... so what are they waiting for.... and why did Turkey give up the chance to buy 100 F-35s and make the wings for them to get S-400s which can't be any good because they are also Russian. 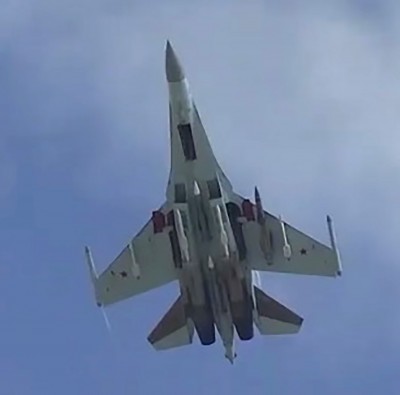 You guys have probably seen the images already but this confirms R-37m on the su-35. Two in fact in tandem under the belly, between the nacelles.

In the video below there is supposed footage of the R-37m being lobbed at an enemy. The bastards blurred the distance of the enemy at launch ;-)

MOSCOW, 3 December. /TASS/. The United Aircraft Corporation (UAC) of Rostec has transferred a batch of Su-35S multi-role fighters to the Russian troops, according to the website of the Russian government.
The UAC aviation enterprise in Komsomolsk-on-Amur (PJSC UAC is part of the Rostec state corporation) has manufactured and handed over to the Russian Ministry of Defense another batch of new Su-35S aircraft.

The government also reported that the multifunctional fighters had passed a cycle of ground and flight tests and "made a flight from the KnAAZ airfield to the place of duty."

"Today, the production facilities of the Komsomolsk-on-Amur Aviation Plant are fully loaded. We deliver aviation equipment within the terms stipulated by the contracts, meeting the needs of the Russian Ministry of Defense in modern aviation systems. In order to fulfill production programs, the enterprise continues technical re-equipment and re-equipment with the necessary equipment," the press service quotes UAC General Director Yury Slyusar as saying.

Judging by the video circulated by the UAC, four new Su-35S fighters were delivered

As PJSC United Aircraft Corporation (PJSC UAC, part of Rostec State Corporation) reported on December 3, 2022, the Yu.A. Gagarin (KnAAZ) in Komsomolsk-on-Amur manufactured and handed over to the Russian Aerospace Forces another batch of new Su-35S aircraft. The 4++ generation multifunctional fighters Su-35S passed a cycle of ground and flight tests in various operating modes and flew from the KnAAZ airfield to the place of duty. 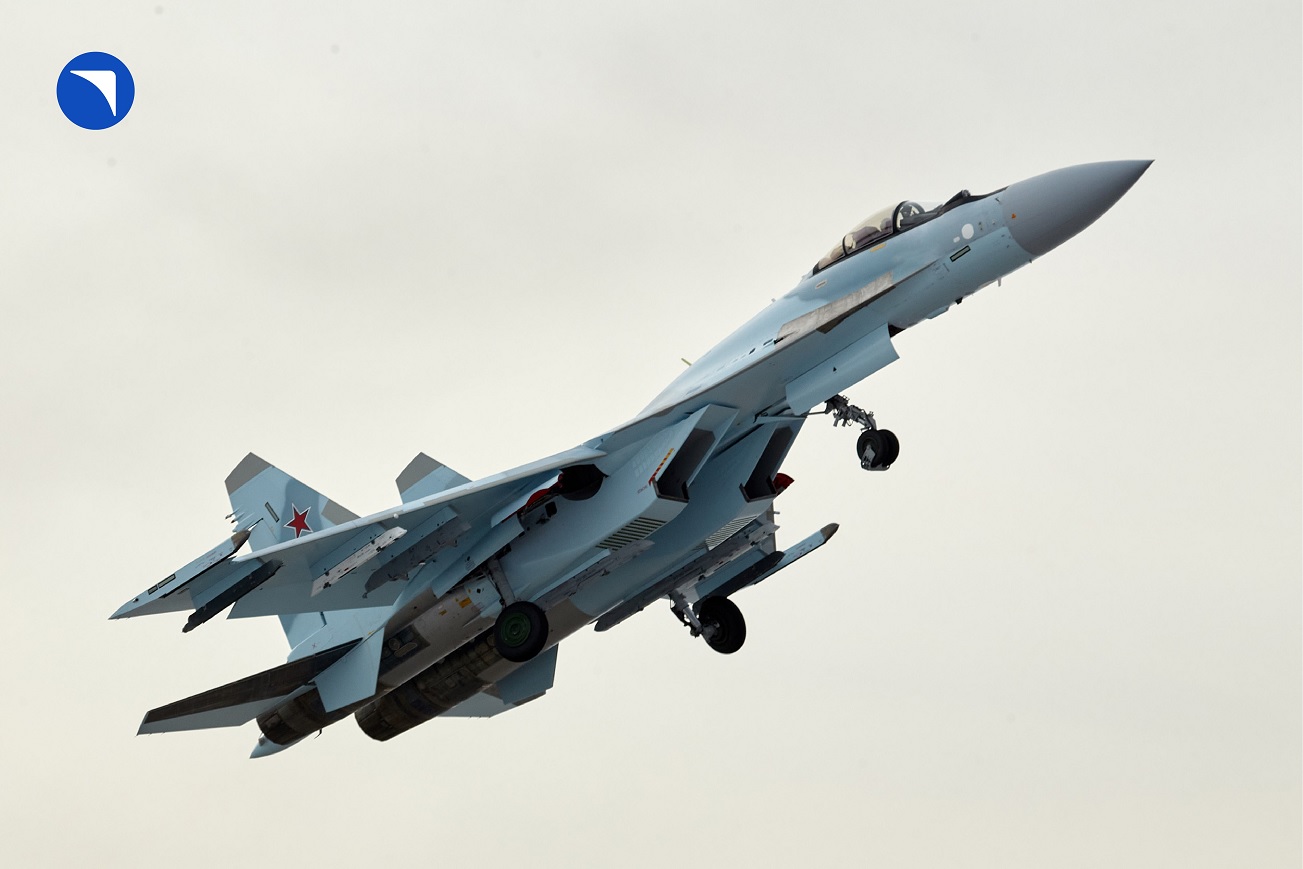 bmpd's comment. Judging by the video circulated by the UAC, four new Su-35S fighters built by KnAAZ were delivered to the Russian Aerospace Forces. Aircraft side numbers on common video and photo materials are retouched.
Presumably, these are the first four Su-35S fighters manufactured under the fourth contract concluded in 2021 by UAC for the supply of Su-35S aircraft to the Russian Ministry of Defense. It is possible that this contract includes 22 aircraft for delivery by 2024.
These four Su-35S fighters are also the second batch of aircraft of this type built by KnAAZ in 2022, which is consistent with previously released information, according to which KnAAZ should hand over seven Su-35S fighters to the Russian Aerospace Forces in 2022.

Earlier, on September 9, KnAAZ delivered the first three Su-35S fighters of its 2022 production program. These three Su-35S aircraft with blue tail numbers "01", "02" and "03" became the final aircraft under the third contract with UAC concluded on August 25, 2020 during the Army-2020 International Military-Technical Forum by the Russian Ministry of Defense for the supply of eight Su-35S fighters.
These three Su-35S entered the 116th Combat Training Center of the 185th Center for Combat Training and Combat Use of Fighter Aviation of the Russian Aerospace Forces at the Privolzhsky airfield in the Astrakhan region, becoming the first Su-35S aircraft as part of this Center.

Earlier in 2021, KnAAZ handed over the first five Su-35S aircraft under this 2020 contract (the first three of them were handed over on December 13, 2021, and two more - presumably at the end of December).

Prior to that, under two previous contracts in 2009 and 2015, the Russian Aerospace Forces received 98 serial Su-35S aircraft from 2012 to 2020, two of which have now been decommissioned or lost by early 2022. Thus, the total number of serial Su-35S received by the Russian Ministry of Defense, now, with the delivery of four more aircraft under the new contract, should reach 110 units. 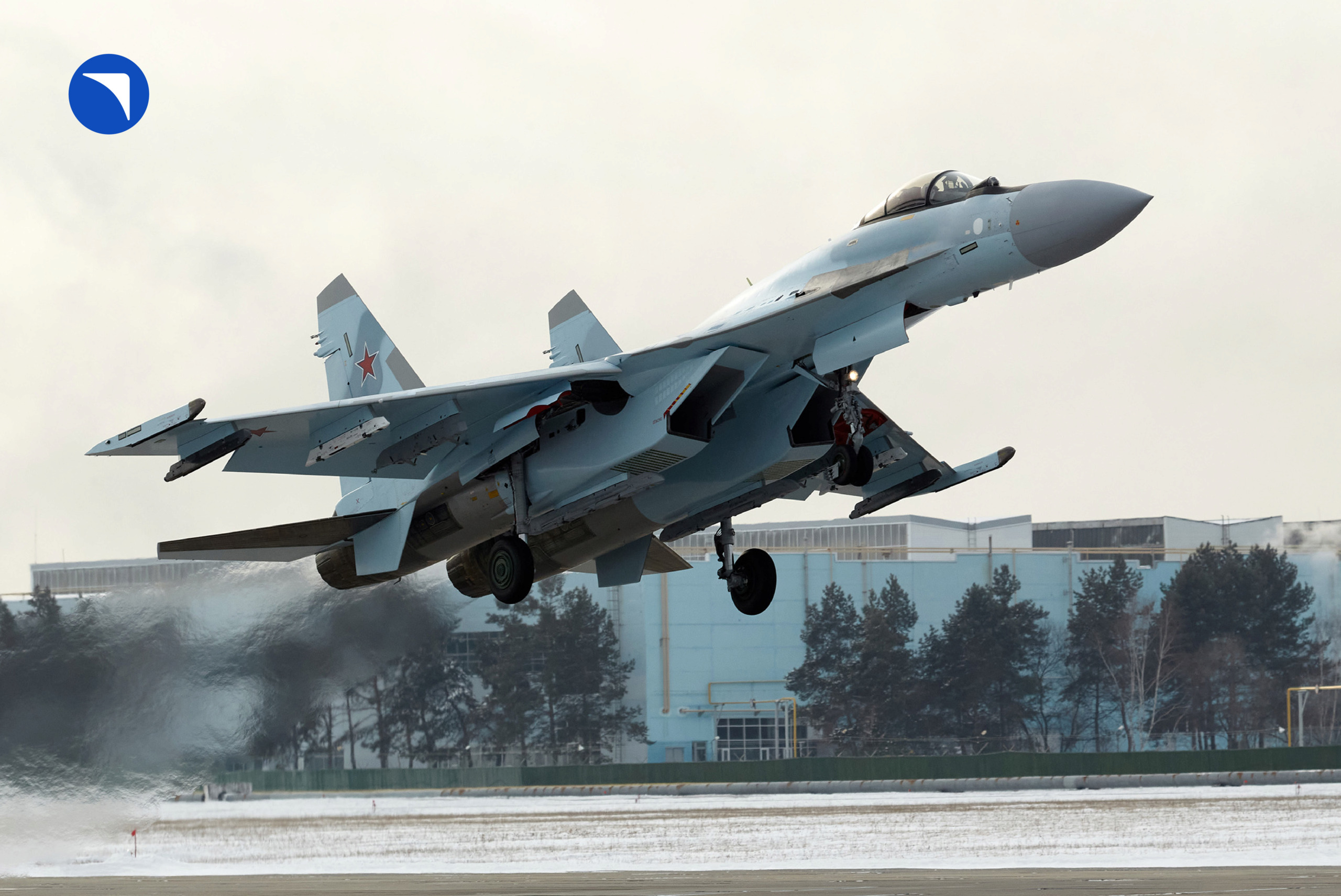 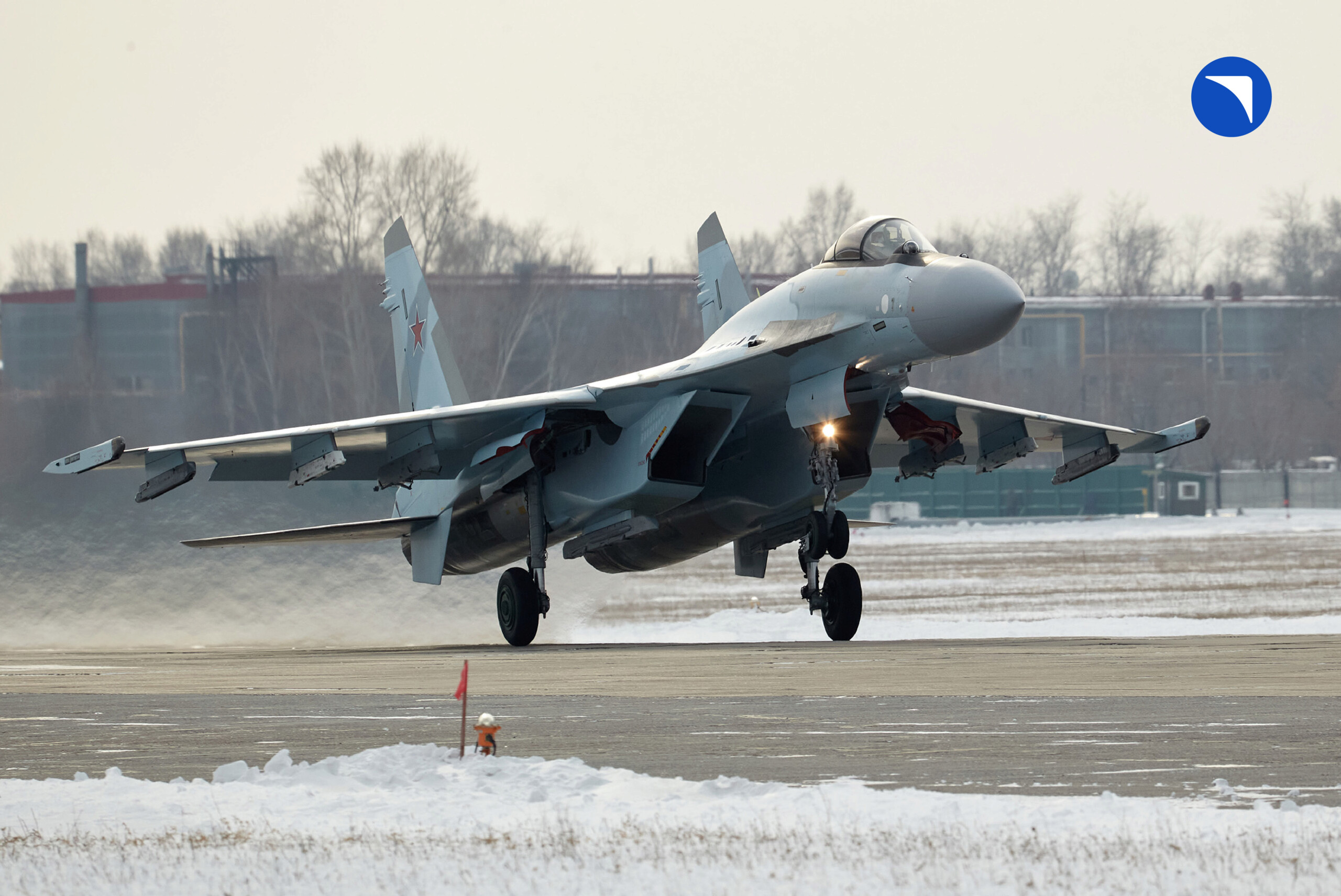 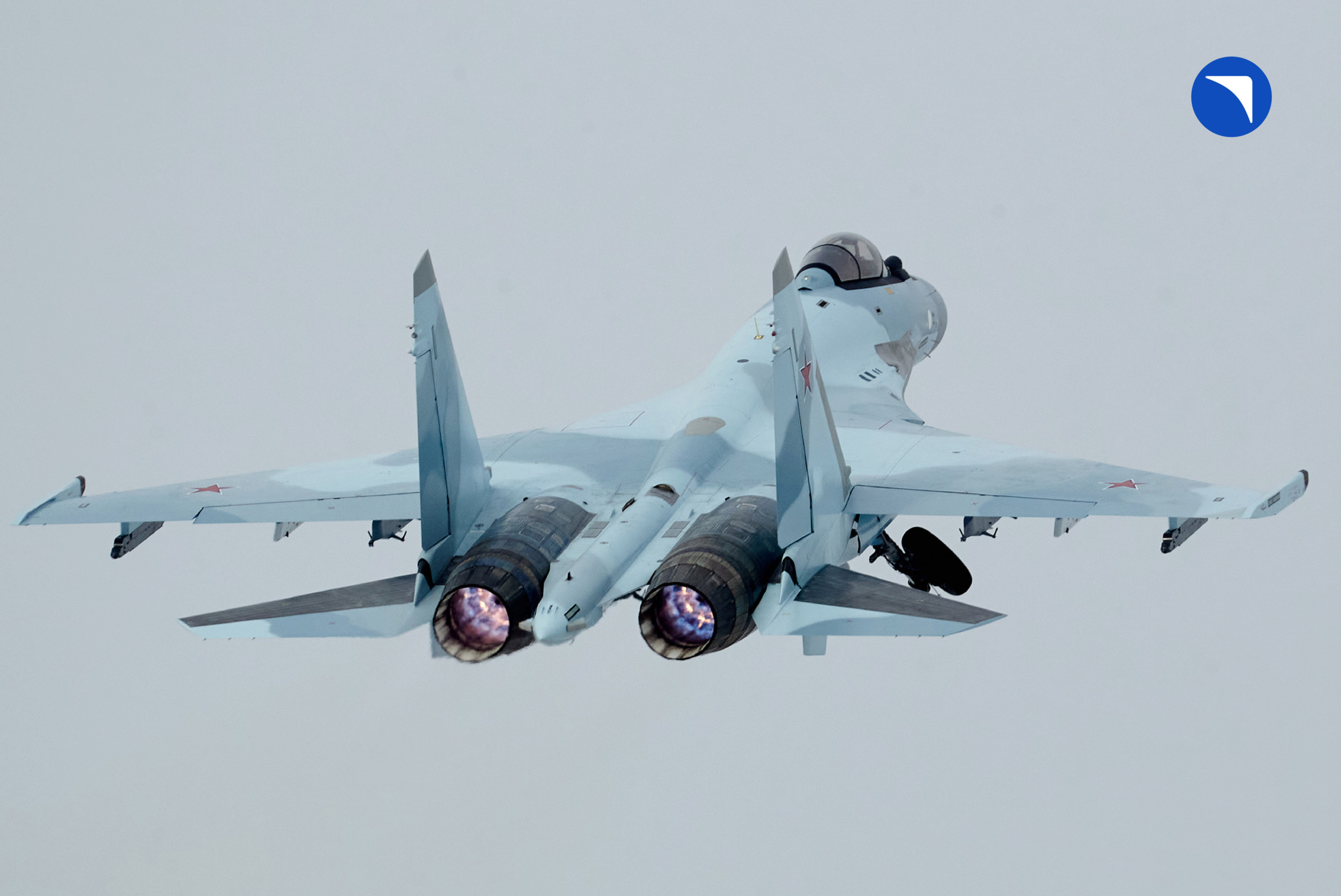