...You got to love how it comes with the cliche'd 'Kremlin' and 'Putin', like the Ministry of Defense and Sergey Shoygu, and or the VVS and Viktor Bondarev don't exist or have a say in the matter lol!

Not to mention they failed to mention that even if initial batch will be 12 rather than 50, the final amount will still be the same, so they extended the deadline per se rather than dropping the numbers being produced.  So they will still end up with the 200 - 250 that they are initially wanting.  And they will start production next year.

It's standard procedure that the MOD requires a sample size of military systems that they will use to engage in their own trials, and determine if the system in question is adequate, if it needs improvement and or if they want to ask for something more capable before going in to mass production. The article is garbage, it jumps to conclusions without actually engaging in any serious investigative journalism, and they don't even delve into questions about mode of operations, standard of procedure regarding Soviet/Russian procurement of weapon systems going in to service.
type055

Is there any information about T50's sencond stage engine? I mean izdeliye 30
Alex555 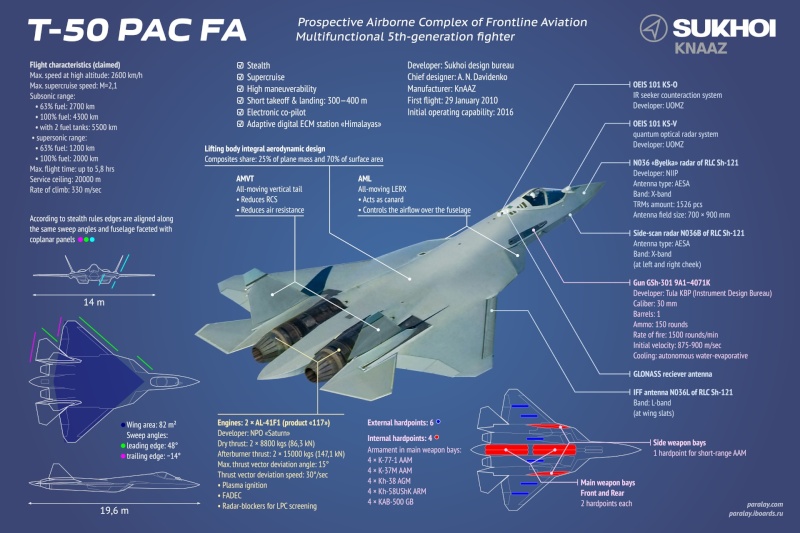 Alex, Austin, thanks so much for this photo. Very good find!
GarryB

So in other words they basically translated the acronym.

The Engine specs mentioned in the pics are not that of the Izdeliye 30. However IOC has been stated to be 2016(in the pic).

I suspect this is a fanboy pic and not an official pic released by Sukhoi.
magnumcromagnon

A new documentary about the PAK FA, with some good footage, around the 34:48 mark you'll see what the life raft system that's stored in the ejection seat will look like:

I heard the program was cancelled. Why? @garry i forgot if i asked but: can a material be maked whit liquid bubbles inside so that disipates radar waves in all directions and put to plane?
mack8

On another note, did anyone heard anything about some sort of "incident" happening with 052 yesterday? What is exactly "fonar" or "fonarya", is that supposed to be the cockpit transparency? Thanks.
Werewolf

mack8 wrote:On another note, did anyone heard anything about some sort of "incident" happening with 052 yesterday? What is exactly "fonar" or "fonarya", is that supposed to be the cockpit transparency? Thanks.

The US Air Force and Navy plan to pursue the development and acquisition of sixth-generation F/A-XX fighters; they consider the fleet of existing jets incapable of handling their Russian and Chinese fifth-generation counterparts, something which they feel constitutes a real threat to national security.
..........

Ooh god, can you imagine what such an endeavor would cost, this will make the F-35 look like a joke, and do we even know what defines a Sixth gen fighter yet.

Marketing defines it. This wont see light of day like most other recent boeing initiatives. They are trying to use threat of Pak Fa and J-20 to market this idea but I am pretty sure it will fail just as hard as F-35 so far is.
Cyberspec

A bit on the future US engine

Anyway the 6th fighter generation is still not have a solid definition yet.. One thing i speculate is that US might go in similar tactics as their Long Range Bomber program by trying to make it cheaper instead going "big bang" As what they did with F-22's.

Does Anyone know when the 6e (flying) prototype of the t50 can be expected?

I know that the are producing 3 planes. But i don't know their production status.

More than 1500 versatile BINS-SP-2M strapdown inertial navigation systems will be manufactured in Russia every year. The latest Russian fifth-generation fighter T-50 (PAK FA) will be fitted with this system, RIA Novosti reports with reference to the press-service of Radioelectronic Technologies Concern (KRET, part of Rostec State Corporation).

“Moscow Institute of Electromechanics and Automatics (MIEA, part of KRET) developed the versatile BINS-SP-2M strapdown inertial navigation system, which may be installed on aircraft, vessels or ground vehicles. The production program assumes output of 1500 systems per year,” KRET reports.

Multi-role Su-35S fighter is fitted with BINS-SP-2M system. It will also be installed on PAK FA jets.

“The cost of the new BINS system is 40% lower compared to foreign analogues. At that BINS-SP-2M outmatches the foreign systems in terms of performance. Moreover, its service life is at least 50,000 hours (almost two times longer compared to analogues),” MIEA CEO Alexey Kuznetsov said.

BINS-SP-2M is able to define the position of an aircraft more precisely (precision is almost two times higher compared to the previous version), Kuznetsov added. KRET is going to modify BINS-SP-2M for use on carrier-based aircraft, press-service added.

The system is intended for defining the position of an object, data processing and generating navigation and flight information using GLONASS system. At the same time the system is able to define coordinates and parameters of the object’s movement in standalone mode and in case of absence of external signals.
← previous | next »
GarryB

That is going to be a useful system for artillery vehicles like Grad and Coalition.


The T-50 is not meant to be a direct rival for the F-22 because the Russian aircraft is not as stealthy.

While the T-50 is the stealthiest aircraft the Russians have, it is not nearly as stealthy as the F-22


Russian Deputy Minister of Defence Yuri Borisov, has recently announced that the PAK-FA programme may be halted or adjusted, due to the dire conditions of Russia’s economy

, affected by the Ukrainian crisis and the subsequent (proxy war and) EU sanctions

The T-50 is not meant to be a direct rival for the F-22 because the Russian aircraft is not as stealthy.

The T-50 is not meant to be a direct rival for the F-22 because the Russian aircraft is not as stealthy.

its not as stealthy as the F-22, sure

I heard the program was cancelled. Why?

Some idiot read there was an order for 12 pre serial production aircraft for the Air force and took that to mean that they were only going to order 12 in the 2015-2020 financial period... the first order of 12 is for operational testing units to develop the manuals to use the aircraft including tactics and maintainence.


@garry i forgot if i asked but: can a material be maked whit liquid bubbles inside so that disipates radar waves in all directions and put to plane?

Air doesn't deflect or dissipate radar waves... early stealth paint had small iron balls suspended within it for the same purpose... in practical terms I rather doubt its effectiveness.