I found most of your reply statements deflections at best

Who can do everything they need on a computer with a mouse.... I suspect they should be using a tablet or phone if that is the case.

But thanks for proving my point... if you primarily use a mouse or a trackball or a joystick then you push away that keyboard and you put the primary control device directly in front of you...

I thought you might have a point there. Until I looked at the location of my hand on the computer I've been using for 10+ years.

Looks dead center to me. And if i wanted to an ass, i could say laptops outsell PC's which means center sticks are better. Backman wrote:
I thought you might have a point there. Until I looked at the location of my hand on the computer I've been using for 10+ years.

Looks dead center to me. And if i wanted to an ass, i could say laptops outsell PC's which means center sticks are better.

Yeah the hypocrisy is a bit outrageous, especially knowing that he flew mostly the FA-18 and let me see, between the legacy Hornet and the Super Hornet, where is the stick again on BOTH.......OH YEAH, IN THE CENTER lmfao!

This stick "thing" is much to do about nothing!

Many years ago when the F-16 was in it's infancy I read somewhere why they opted for a side stick on the F-16 and if I remember correctly the answer was quite simple;

Unlike other fighter jets the configuration of the ejection seat was tilted slightly backwards in order to give the pilot an even better all-round view from the cockpit. In an high G environment the pilot would be forced back into his seat which could have made it quite hard to operate the center stick in certain situations - hence they moved the stick to the side for easier access and control with the pilot's arm resting on the console.

Most pilots are still men, for them it´s normal to have a stick in the middle.

Side-stick might be easier but clearly plenty of planes do fine with a centre-stick.
GarryB

With a side stick controller a two crew aircraft where either crewman is expected to be able to fly the aircraft means the side sticks have to be different... because the centre column will have the engine controls and they both need to be able to access them so one is flying and the other is controlling the engine thrust.

With the central area having the engine throttles that means if you have side flight control sticks... the crewman on the left side of the cockpit needs their side stick to be on their left hand side because to their right will be the throttle controls in the centre. The crewman on the right will have their side stick to their right and the central throttle controls to their left, so for ambidextrous crew there wont be a problem but for the rest of the worlds population it is going to be a pain in the ass learning to fly left handed... 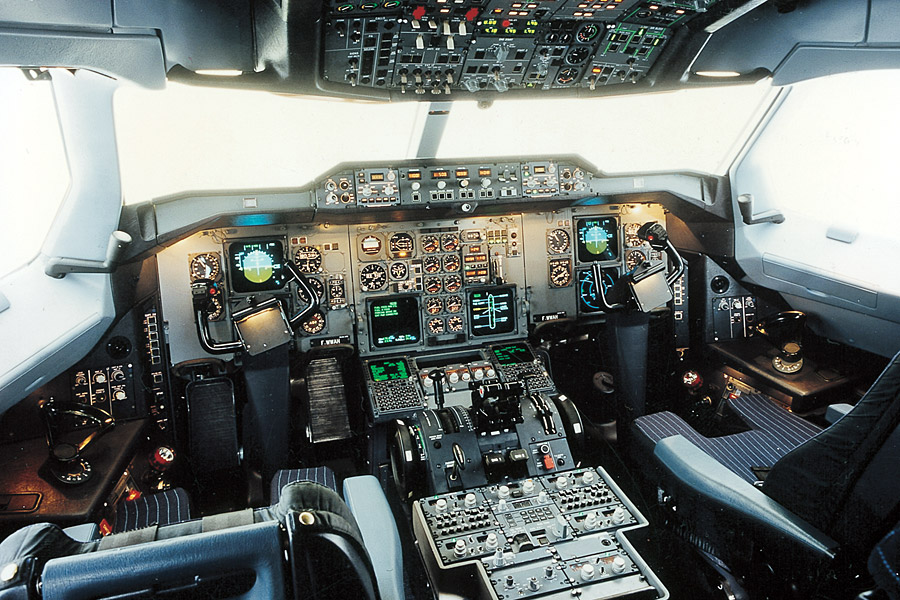 Not only is it directly in front of them and easy to reach with either hand they choose to use, but the yoke design means they very easily choose a specific angle of roll and yaw...

My first joystick for a computer game was for an Amiga 500 and it was digital... it had internal clicking connectors so the stick was like the buttons on a keyboard... you could have forward or back or left or right or you could have two at a time that were not opposites... so effectively you could not have forward and back as they would cancel each other out... each button meant full turn in that direction or two together added four more directions diagonally, so with four keys you could have 8 combinations of direction.

With an modern analogue joystick you can move it in 8 directions but you can vary the amount so you can have a tiny touch left or a bit more or a bit more until it was moved to the left as far as it would go... so you could roll or climb or descend at a rate you could control yourself.

The Yoke above is analogue and allows different control levels and angles to be delivered by the pilot with either hand. 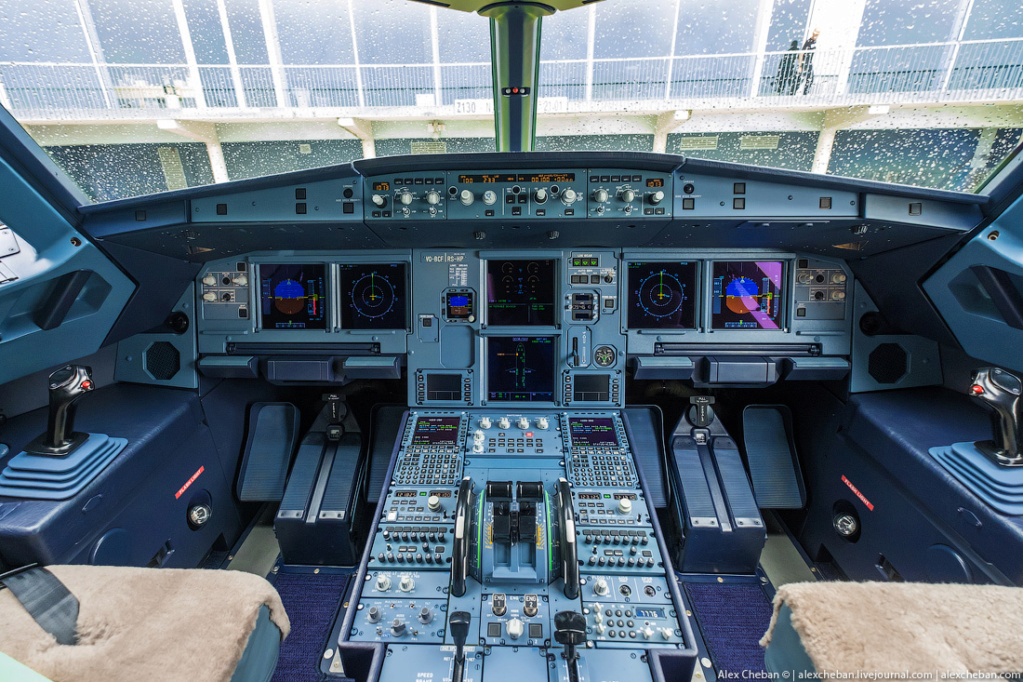 Means you need to be able to fly the plane with either hand... the cockpit positions are fixed so the captain sits on one side and the co pilot sits on the other... the captain would obviously be able to decide, but they are not going to make all right handed pilots co pilots.

You can only use one hand to fly this plane and which seat you sit in determines which hand that will be.... you get no choice at all.

So yeah, if you prefer a side joystick and you say it is better... try using your other hand with it on the other side because in a plane with a side stick controller you can't move the stick to the side you prefer... and you certainly can't use both hands on it.

The title is one thing but he debunk a lot of myth and smear about the Felon.
There is nothing whoever read this thread not already aware of, but it good to see someone did this.

^ So after making 6 videos about the aircraft, he had to make a 7th because his inbox was flooded with ridiculous bullshit that got on his nerves. 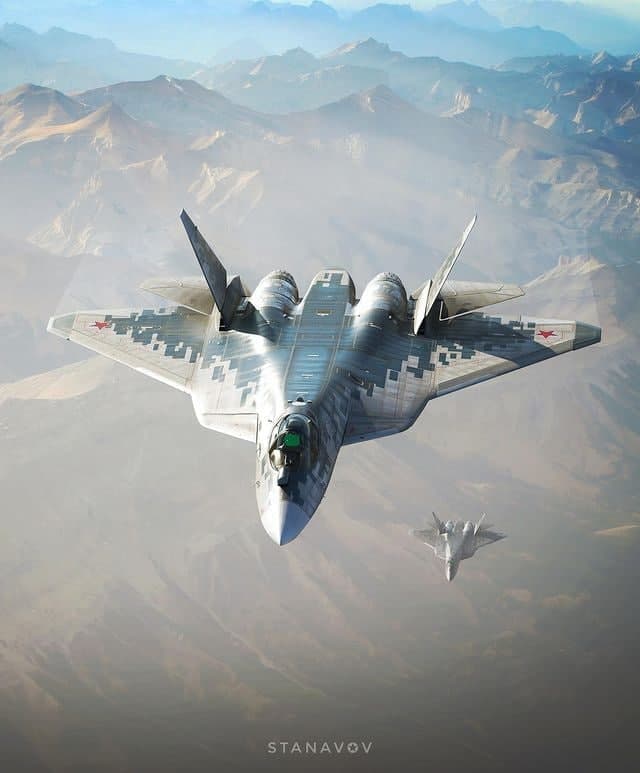 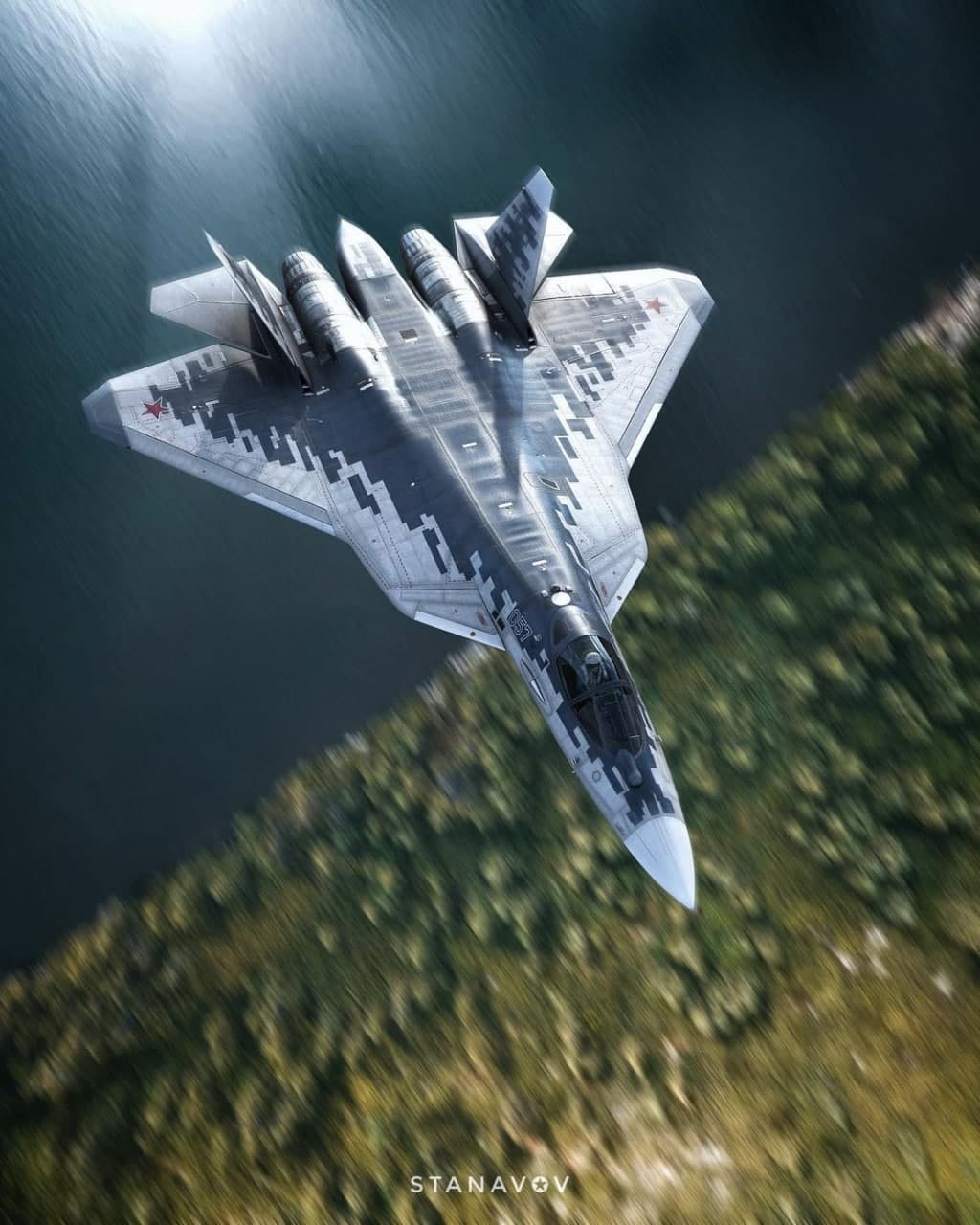 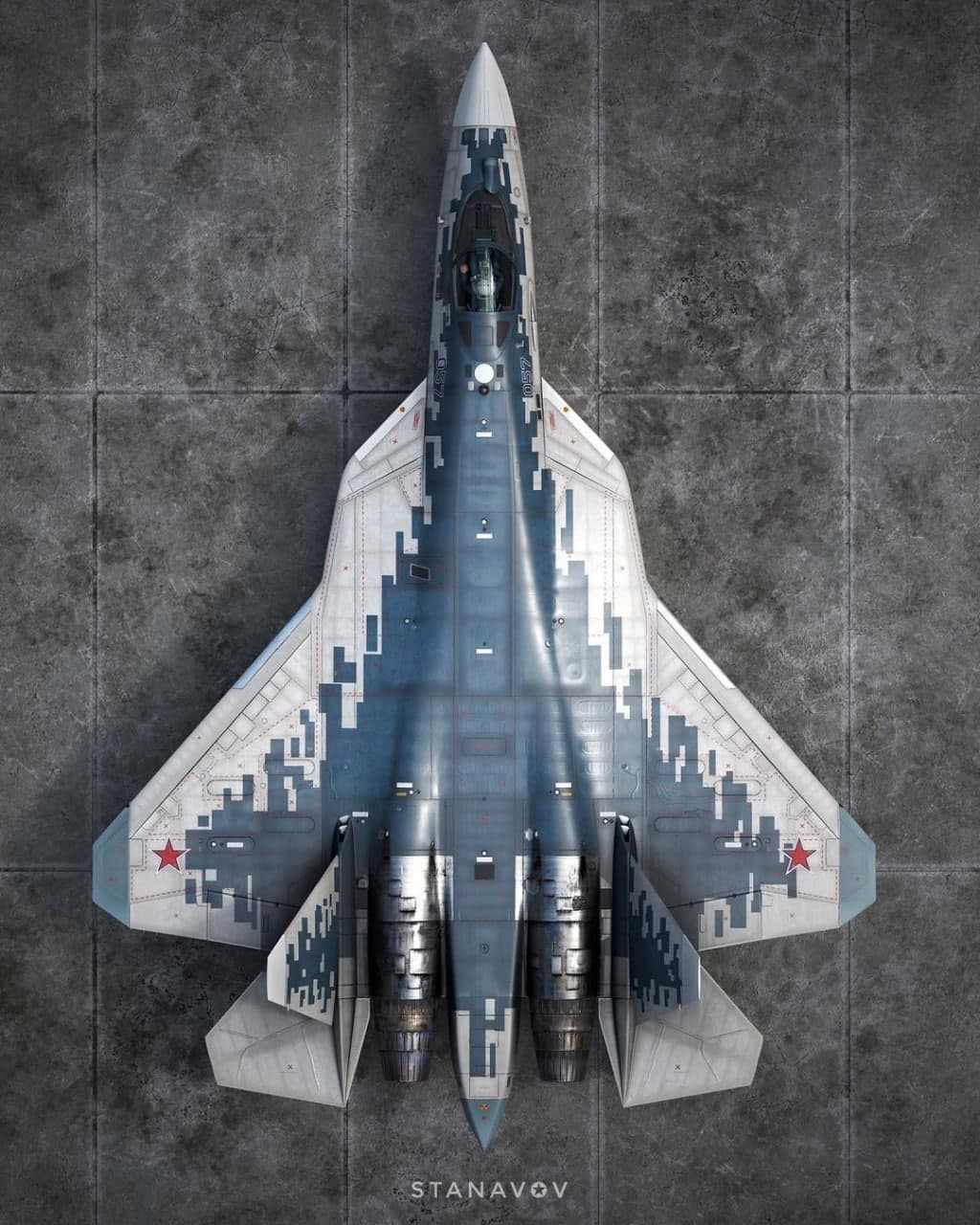 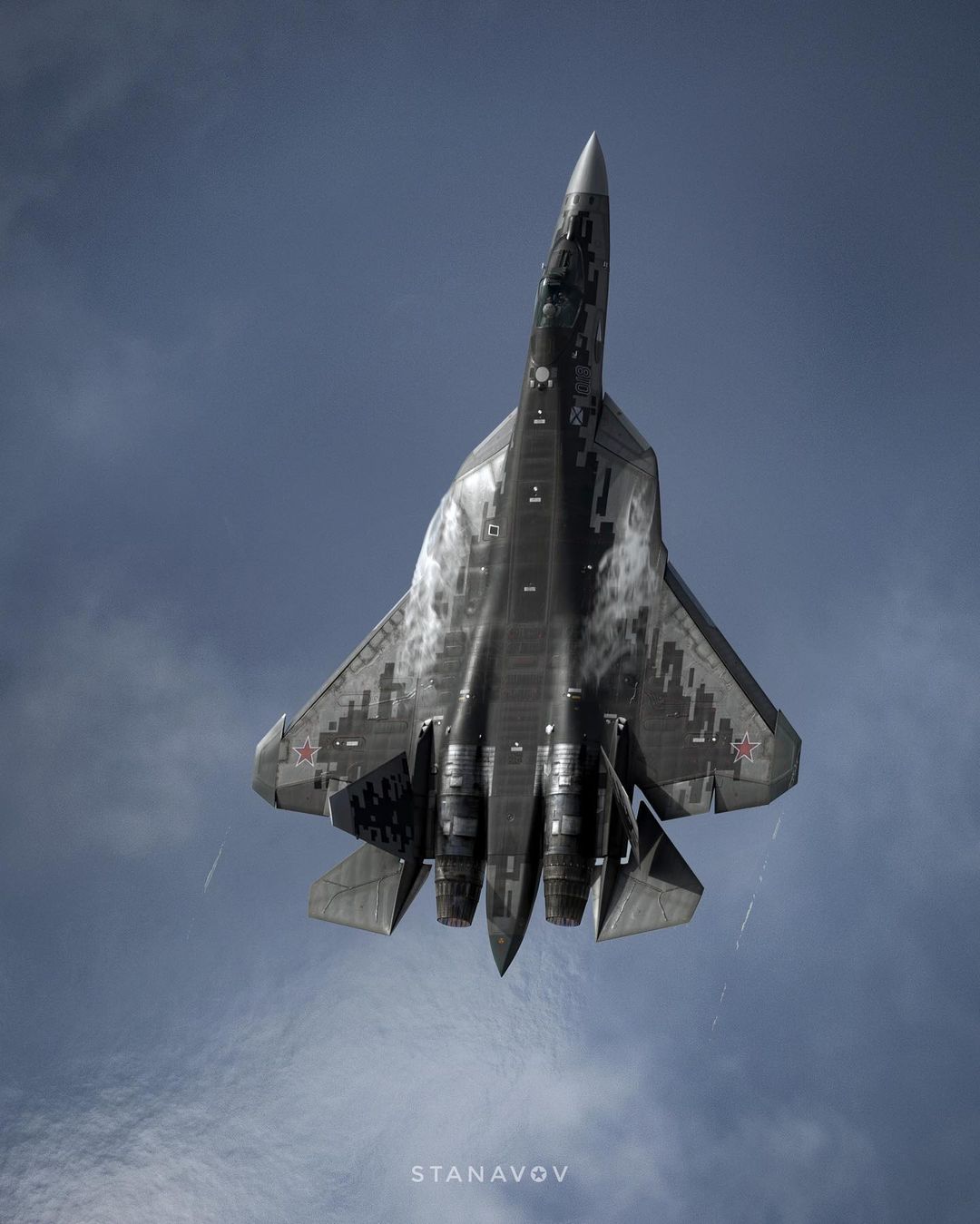 Prototype "508" with a new paint job and number?

Big_Gazza wrote:Prototype "508" with a new paint job and number?

Yeah I wasn't sure if it was a photoshop to be perfectly honest, hence why I posed it in a question manner, to see if anyone here knew anything about such a paintjob. I bet it is a PS.
Mir

All of that is 3D graphic art. Very nice though

randomly put russia gas core reactor rocket speed in cyrillic for yandex........ Got this instead.

In Russia, another system of hypersonic weapons is being created. It is implemented within the framework of development work (ROC) "Larva-MD". Now the product is at the stage of working out the layout, it has not yet come out for flight tests. The new missile is designed to equip the Su-57 stealth fighters. Presumably, it will fly at speeds five or more times faster than sound and will become almost invulnerable to modern air and missile defense systems.


According to the documents that are at the disposal of Izvestia, the second stage of the ROC "Larva-MD" started in 2019. The main developer on this topic is JSC "Corporation" Tactical Missile Armament ". As an engine in the rocket is used the so-called product 70. It is developed by the Turaev Machine-Building Design Bureau "Soyuz", specializing in power plants for ultra-high-speed missiles.

Sources of "Izvestia" in the defense Ministry confirmed that for the armament of the Su-57 hypersonic munition is being developed. Now it is at the stage of ground working out and flights with weight and size models. The missile will be placed in the internal compartments of the Russian stealth fighter.

"It can be assumed that the "Larva-MD" is a replacement for anti-ship ammunition for operational-tactical aviation. It should be a hypersonic missile, probably with a range of several hundred kilometers, "said military expert Dmitry Kornev.

He also added that the new development will replace the family of anti-ship supersonic missiles X-31, which were created in the 1980s.

"Russia is surrounded by seas and our country cannot do without modern air-to-surface weapons," Dmitry Kornev concluded.

The fact that Russia is developing a high-speed anti-ship missile of a new generation, said this year at the International Naval Salon in St. Petersburg and the General Director of KTRV Boris Obnosov. According to him, the jam-proof "smart" ammunition will replenish the line of aviation weapons of the company.

So, in 2013, the then commander-in-chief of the Air Force, Colonel-General Alexander Zelin, revealed some details of the creation of lightweight hypersonic missiles. According to him, such ammunition weighs about 1600 kg and reaches a speed of Mach 6.

In 2012, development work was launched to create another hypersonic missile with a PVRD - the novelty was called "Gremlin". This munition is intended for arming operational-tactical aviation, including Su-34 bombers. Small size and weight should allow you to hang several missiles on each aircraft.

Earlier, Alexander Zelin reported that in addition to small hypersonic guided missiles in development is a much heavier model for long-range aviation, which can reach speeds of up to Mach 12. The novelty, the work on which started in 2016, was called "Sharpness". As a power plant in this rocket uses a more powerful ramjet engine, known under the designation "product 71".

In addition to aircraft carriers, hypersonic ammunition in Russia is being developed for the fleet and the Strategic Missile Forces. 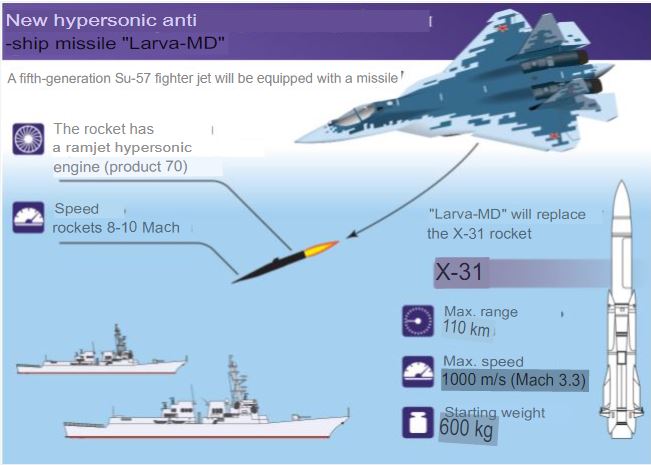 I'm fiending for an su-57 fix. When tf are they going to show us some new ones dangit????