The short order posted on the Kremlin’s portal calls on the Government to “submit proposals for the creation of a railway route to the Barents Sea in the area of the bay of the Indiga River.”

Thanks to FP's December post we all know where the Indiga River is and how the railway is likely to get there.

Now not just an important link but now a Putin Strategic Link.

This is the Russian electric train that Argentina will receive, 21.01.2022.

Thanks to advanced technologies, the train can reach a speed of 160 kilometers per hour and change direction in just 1-2 minutes.

The company Transmashholding, one of the leading Russian manufacturers of rolling stock for rail transport, has won the tender for electric trains from the Government of Argentina for a total value of more than 864 million dollars.

As part of this competition, the Russian company will supply the Latin American country with 70 electric trains of the Ivolga series, covering 560 wagons. According to Transmashholding, throughout several stages, the Argentine authorities not only evaluated the technical and economic parameters, but also tried to ensure that the chosen model meets the expectations of the passengers. "In total, the process of choosing the provider lasted more than 3 years," they said.

Containers are dear to us everywhere

Russia wants to quadruple their Transit

...
Russian Railways plans to quadruple the volume of container transit over five years, to 4 million tons TEU in 2027. Market participants agree that Russia has such a potential, but not everyone considers it possible to realize it so quickly. Problems remain the lack of bandwidth infrastructure, terminals, as well as inconsistency in the work of railway administrations. According to analysts, to reach 4 million TEU, it will be necessary to attract additional capacities of the Trans-Siberian Railway, which will affect the interests of coal exporters.

Kommersant is still spreading its anti-Russian BS. "Inconsistent work of administrators" must mean failure of the "Putin regime"
and the need for the crowning of Navalny. These Bereskovsky rotted clowns should take a look at Canada and the USA for an
example of administrative incompetence. F*cktarded vax mandates leading to empty shops shelves and massive disruption in
construction. Somehow Russia is not paralyzed in this manner.


Sakhalin got rid of the traces of the Japanese occupation. Russia did what the USSR could not
December 10, 2021
251k read

Sakhalin, even in the 21st century, was cut by the "legacy" of the Japanese occupation like scars on the body. These scars could be seen on any map. These were the railways with which the Japanese entangled Sakhalin, while the southern part of the island was under their control.
Damn bridge. Author of the photo: Sergey Dolya.

Actually, of course, railroads are good. And for their construction, the Japanese could be thanked, especially since they really built them in good conscience, and a number of objects - bridges and tunnels, still amaze with their beauty.

If not for one "but". All railways were built with the Japanese standard gauge - 1067 mm.

When South Sakhalin, as a result of the successful military operation of the Soviet troops, carried out on August 11-25, 1945, returned to the control of the USSR, it turned out that something had to be done with the railways. Of course, almost immediately it became obvious that the railways would have to be completely redone, under the Soviet gauge of 1524 mm (later 1520 mm).

I have alreadyhe wrote in great detail and fascinatingly about how Russia since 2003 has done what the USSR was even afraid to touch. We completely changed all the tracks on the island to the Russian standard 1520 mm. It was a gigantic job, it was necessary to essentially rebuild 800 km of railways, and without stopping the movement of trains on the island. It was truly a titanic work. Be sure to read myarticle , it's worth it.

But at that time, although all the main railways were rebuilt, there remained a small, only 7 km long section, which the locals called "dacha", from Chekhov through Kholmsk to the Nikolaychuk station. A diesel train went there - drove summer residents. And then we decided to first wait until the end of the summer season, then finish this section. On September 30, 2020, the last trip was made by a “narrow-gauge” suburban train, the locomotive of which will become an exhibit of the Museum of Railway Engineering.

I am amazed at the modesty of RZD. I have to do their work, because last year, before the spring of this year, this section was changed to 1520 mm gauge, and the traces of the Japanese occupation were completely finished. And about this epoch-making event in the Russian Railways, they took water in their mouths.

Moreover, the work was done not only on laying the tracks to the Nikolaychuk station - the route was extended by one stopping point - closer to the Devil's Bridge.
Photo by IA "Citysakh.ru" with reference to the press service of the Far Eastern Railway

The Devil's Bridge is a very popular tourist attraction. It is located on the half-dismantled Nikolaychuk-Kamyshevo-Sakhalinskoye railway line and was built by the Japanese in 1928. The most beautiful object. Two tunnels and two high bridges, located in picturesque mountain valleys, are popular tourist sites.
Photo: press service of the Far Eastern Railway - a branch of JSC "Russian Railways"

In 1994, traffic on the bridge was closed due to the closure of the stage. In the 1990s, the Sakhalin railways experienced, to put it mildly, not the best of times, and many sections were closed and dismantled. Fortunately, the Devil's Bridge is currently maintained in good condition.

By the way, now summer residents will get to their plots on the handsome train RA3 "Orlan" produced by the Mytishchi plant "Metrovagonmash".
Photo: sovsakh.ru

Compare with what you had to ride before. Japanese train D2, manufactured by Fuji Heavy Industries LTD. But this is no longer a fragment of the occupation, the USSR continued to buy diesel trains in Japan, instead of altering the railway. This train D2-007 was bought in 1986.
Author of the photo: Sergey msv1974, https://trainpix.org

In general, it turned out symbolically - Russia replaced the Japanese gauge, while the last site of work was the station directly in front of the most famous and most beautiful bridge built by the Japanese. As a reminder of the past, and that it was Russia that managed to put an end to it.

The link takes you to a translated version of the article, so if you have the time please visit the article by the link above and give it a like too... I am sure they would appreciate it.

I did not bother to copy across the photos so visiting the link will show you the old lines and trains and the new trains being used.

Russian Railways has successfully completed experimental dispatches of trains weighing up to 14,200 tons and switched to their mass use.

Before the start of the first stage of modernization of the Eastern Landfill, trains with a mass of no more than 6,300 tons followed the BAM. During the implementation of the first stage, the movement of heavy trains weighing 7,100 tons was organized. By 2022, driving heavy coal trains has become the new norm on the Trans-Siberian Railway and BAM. In the first half of the year alone, more than 8 thousand of them followed . This allowed an additional 1.8 million tons of cargo to be exported.

The increase in the length and mass of the trains makes it possible to maximize the use of the resources of the Eastern Polygon, in addition to the capacities that are growing due to construction.

Every day, about 30 double trains of weights from 12.5 to 14.2 thousand tons follow the network of JSC "Russian Railways" to the east.

The technology of twin trains requires the presence of a mainline freight traction capable of pulling a train of such length and weight, and the appropriate infrastructure for both sending and receiving trains of such length.

By the end of 2024, as part of the second stage of the development of the Eastern Polygon, it is planned to build 1,350 km of additional tracks, 26 sidings, reconstruct 25 stations and six sidings. It is also planned to carry out construction in the Primorsky Territory of a bypass of the Shkotovo — Smolyaninovo section with a length of 12.2 km . In the Khabarovsk Territory, the Volochaevka — Komsomolsk-Sortirovochny — Vanino section with a length of 829 km will be electrified. In addition, traction power supply devices — transformer substations feeding the contact network - will be strengthened on the Transsib and BAM sections.

Any chance of a map, the link doesn't work for me?
caveat emptor 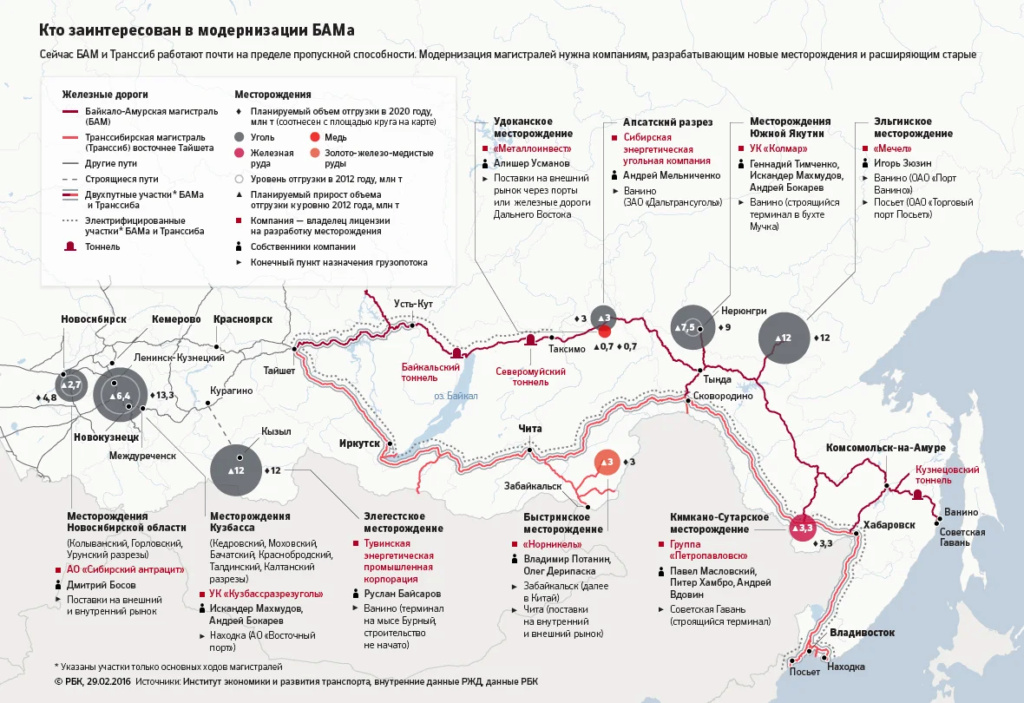 BAM route is dark red, while TransSiberian is light red. They are basically building second line on BAM route. On this map you can see investment projects developed/developing on the route.