GarryB wrote:Interesting article Tsavo... the title says it is ready for action but the body of text says it is only just being launched and hasn't even fitted out yet.

they can tow it already as a mobile heliport; it'll take less time to get accepted than the CV-17.


Hahaha... producing them rapidly is one thing... are they any good is another...

certainly no worse than their Korean & Japanese counterparts!
These ships will free up CV/Ns for their primary tasks.


Lots of navies with lots of problems... perhaps taking longer but getting it right makes more sense than pumping out as many ships as you can.

they waited long enough & now learning/improving by building them at their own pace.


A navy needs a purpose... you can't justify affording one otherwise.

protecting their island claims, SOF ops, & fighting pirates/disaster relief r few of the reasons to have them.


So they are either intending to engage in US style piracy, in which case an enormous fleet will put them in a good position, or they are going to have a full garage..

they'll have a full toolbox for the same/similar ops Adm. Jeng He conducted: https://en.wikipedia.org/wiki/Zheng_He


Regarding the ship itself... it seems to be sitting very low in the water for a ship that is not carrying a combat load...

it has lots of heavy equipment/gear inside & probably full ballast for safety.
GarryB

Just becouse you dont understand the purpose of the Chinese Fleet im sure the Chinese are well aware of them them self.

They have little practical experience, and as the failure of the Kuznetsov in Syria regarding the recovery gear, experience is a harsh teacher... theory is great and it is very important to get right, but at the end of the day if you make mistakes it can all be for nothing... or worse.

Look at the maginot line... enormously expensive... yet it did exactly what it was supposed to.

The French are not stupid, it was never intended to stop German forces and prevent a major war... it was intended to force the Germans to attack other european countries... while they were fighting Belgium and the Netherlands etc the French were supposed to come to their support and all the fighting was supposed to take place in the Low countries.

The problem was that those countries rolled over so quickly the French didn't have time to move their forces to support them.

The Maginot line did everything it was supposed to do.


And we should not forget that China tested alot of thier systems in the 00s before starting any mass production. The first Type-52C(D) destroyer for example was launched back in 2003 but massproduction wasnt started untill 2012-13. Plenty of time to fix and update any fault systems.
Same for the Type-54 frigate, the Type-071 LPD and so on.

To be honest, if you said Russia was going in to Syria to support Assad against ISIS, I would have said don't do it... the risks are too high, and the potential for catastrophe are too high (the US went out of their way to try to engineer problems including fake chem attacks and resulting cruise missile barrages).

I honestly didn't think the Russian military could mount such an operation.

Even their actions in the Crimea starkly contrast the attempts by Gorby to hold the USSR together... with various shootings by police and army... though I now suspect the US and UK probably funded and supported a lot of that shit too to cause unrest and make things get out of hand like they did in 2014 in the Ukraine.

I rather doubt the US could have done what the Russians did in Crimea... no one killed... order maintained... referendum conducted and the people listen to... it would be impossible for the US to do that simply because I doubt they would be happy with the real choice of any people because it is unlikely they will be voting to put the US stooge into office so he can fleece the country of billions of dollars from aide and from the people.


they can tow it already as a mobile heliport; it'll take less time to get accepted than the CV-17.

Yeah, it is going to take more than dragging it around like a barge to make it an effective and capable military platform.

It needs aircraft and crew and there needs to be training and practise to find out what they can do and what they can't.

Dragging it around like a barge is terribly slow and inefficient... running under its own power should be the bare minimum it is capable of.


certainly no worse than their Korean & Japanese counterparts!

Japan has quite a potent and well organised Navy... I would not underestimate them.

As for South Korea... honestly I have no idea...


These ships will free up CV/Ns for their primary tasks.

Why would you say that?

This ship has no VSTOL fighters BTW.


they waited long enough & now learning/improving by building them at their own pace.

They didn't get divided into 13 odd separate countries and have a couple of economic collapses in the 1990s... but I agree, there comes a time when you either make it or you cancel your plans.


it has lots of heavy equipment/gear inside & probably full ballast for safety.

This ship wont have any armour on board, nor helos or other aircraft, nor any of the munitions and fuel it needs to carry in to conflicts... sitting at the dock like that it should be sitting high... and it is not a submarine... ballast would make it sit lower in the water... which increases drag and slows it down... and makes little sense. The only time it would use ballast would be when it is carrying an unbalanced load and needs to balance out.
Tsavo Lion

patrolling the East and South China Seas, fighting pirates, ASW, disaster relief, helping the CG, port visits, showing the flag, & combined exercises can be done by them for le$$ & still get the job done. Plus, Taiwan may need to be taken by force 1 day.
The helicopter carrier, created in China, was designed for naval landing operations and possible military operations in the coastal zone. On his deck, it is planned to place up to three dozen transport or attack helicopters.
"The first universal landing ship developed in China," has "significant capabilities for naval landing operations and other tasks," according to PRC media. UDC will be used for patrolling in the East China and South China Seas, and its autonomy can provide support for the operation of Chinese troops outside of China.
The Huanqiu Shibao newspaper reports that the helicopter carrier, due to its unique design, special loading, powerful maneuverability, will become an integral element of the weapons used in modern warfare at sea, especially when landing troops on islands. According to one of the military experts of the PRC, UDC has become a large surface ship, which is second only to aircraft carriers in design complexity. He also noted that its creation was dictated by an urgent strategic need. Such ships are in service with the U.S. Navy. http://nvo.ng.ru/nvoevents/2019-09-28/100_280919_helicoptercarrier.html?print=Y


This ship has no VSTOL fighters BTW.


This ship wont have any armour on board, nor helos or other aircraft, nor any of the munitions and fuel it needs to carry in to conflicts...

the yard equipment inside is still heavy enough. It may also have low draft to operate in shallower waters around China.

Second vessel being constructed. Picture is a few weeks old with the first ship still in drydock.
walle83

Update on second ship. Superstructure getting ready.
A launch in the first quarter or 2020 doesnt seem impossible. 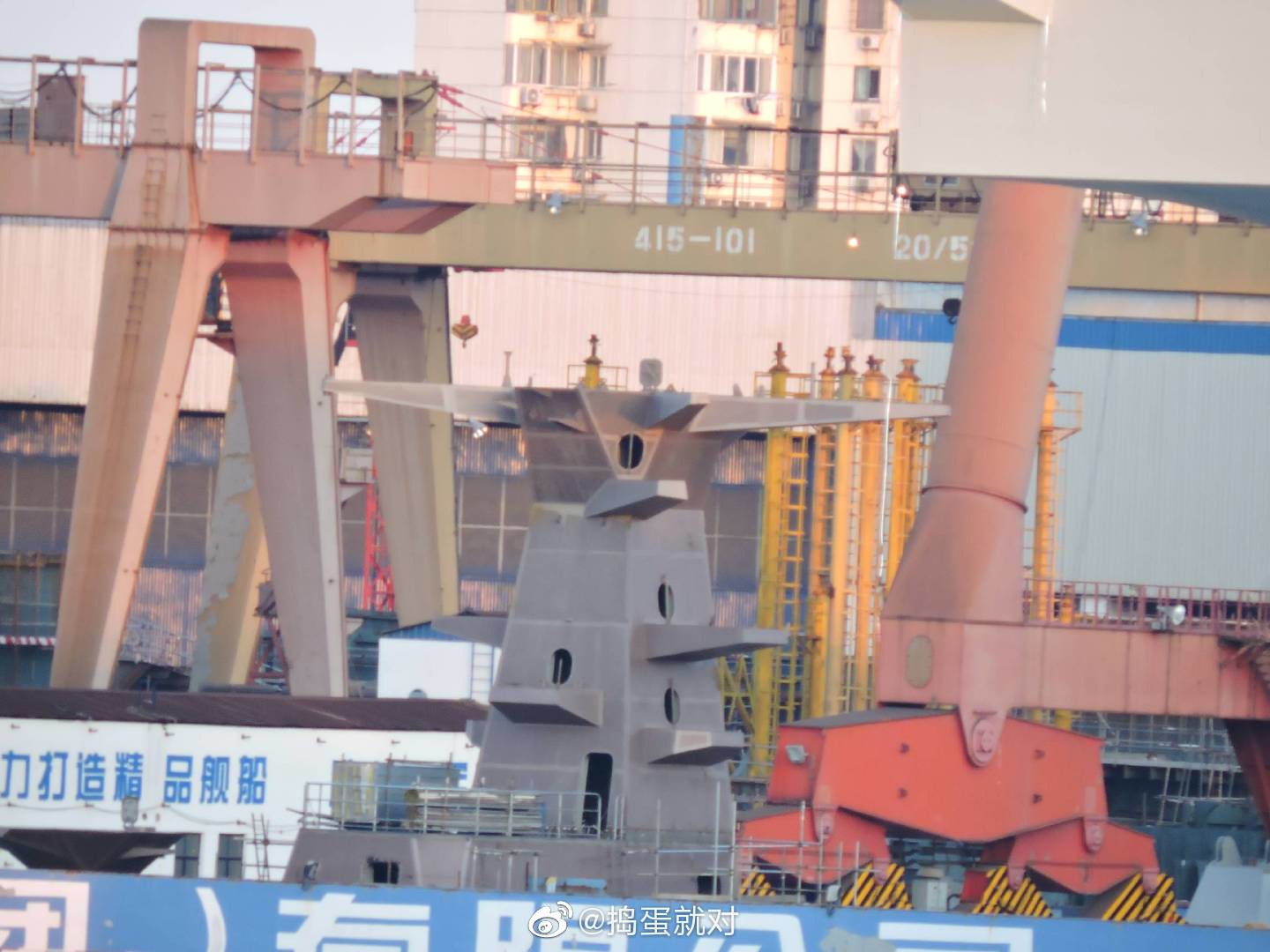 Aperantly the fire was put out rather quickly.
Maybe electrical? Or something out of rubber with all that black smoke?

It is (was) in outfitting. The second vessel is almost ready for launch.

It seems to be the same fire as on Kuznetsov. I doubt it's a small fire because it seems to burn in half of the ship.
Hole

The chinese got a smoking habit. This pic was made at the lunch brake.

Isos wrote:It seems to be the same fire as on Kuznetsov. I doubt it's a small fire because it seems to burn in half of the ship.

Kuznetsov was on fire almost 24 hours with the ships diesel also burning. Here the fire was put out fairly quickly.

Sinodefenceforum members says it was foam containers that had caught fire. Havnt seen any sources yet though.
GarryB

The smoke seems to be in the main hangar and is coming out the lift and rear, but also near the island... which is strange... does it have ammo lifts near the island that might be open?
walle83

Picture taken 24 hours after the fire. Looks cleaned up on the outside. More works remain inside is a good gess.

Kuznetsov was on fire almost 24 hours with the ships diesel also burning. Here the fire was put out fairly quickly.

Sinodefenceforum members says it was foam containers that had caught fire. Havnt seen any sources yet though.

It was burning half of the day according to Weibo. It looks like electrical wires burned half way through the ship similar to Kuznetsov, some diesel generators could also be affected. It will be a tens of millions repair job but it is nothing to China that will use it as an excuse for economic stimulus for the shipyard.
walle83

Well time of repair will show how serios it was.
Maybe the first two vessels Will join the navy about the same time.
walle83

Second vessel getting ready for launch.

Launch is one day away.

Not sure how you are trying to post those images but they just appear as text links to me... except they are just texts... not actual links.

Launch is one day away.

I don't see them too. You probably past the link of the image from the web instead of uploading them from your computer on the server (button at the left of the post image button).
George1 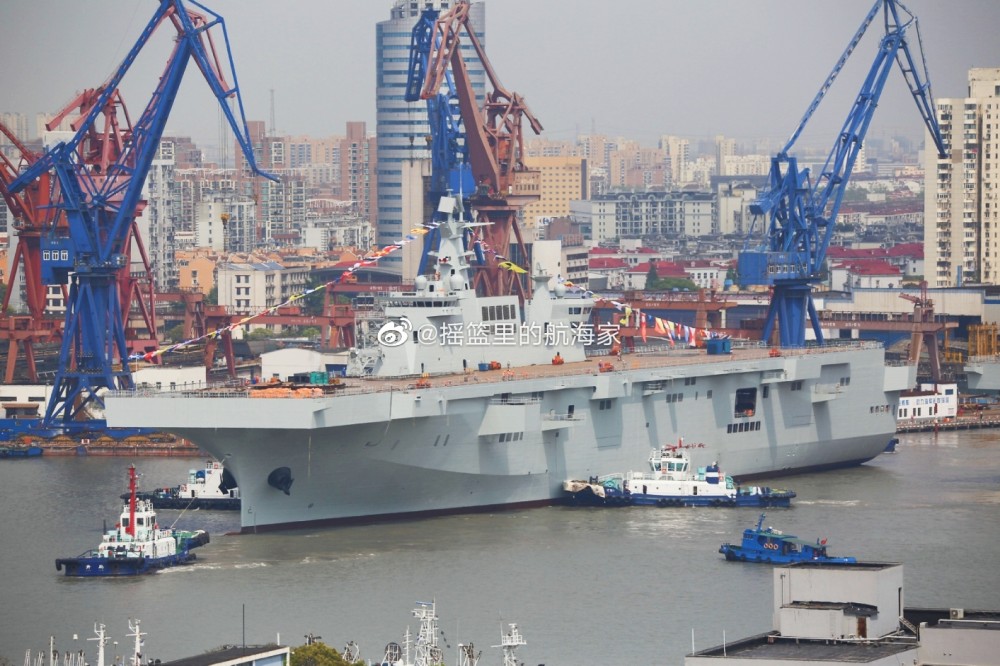 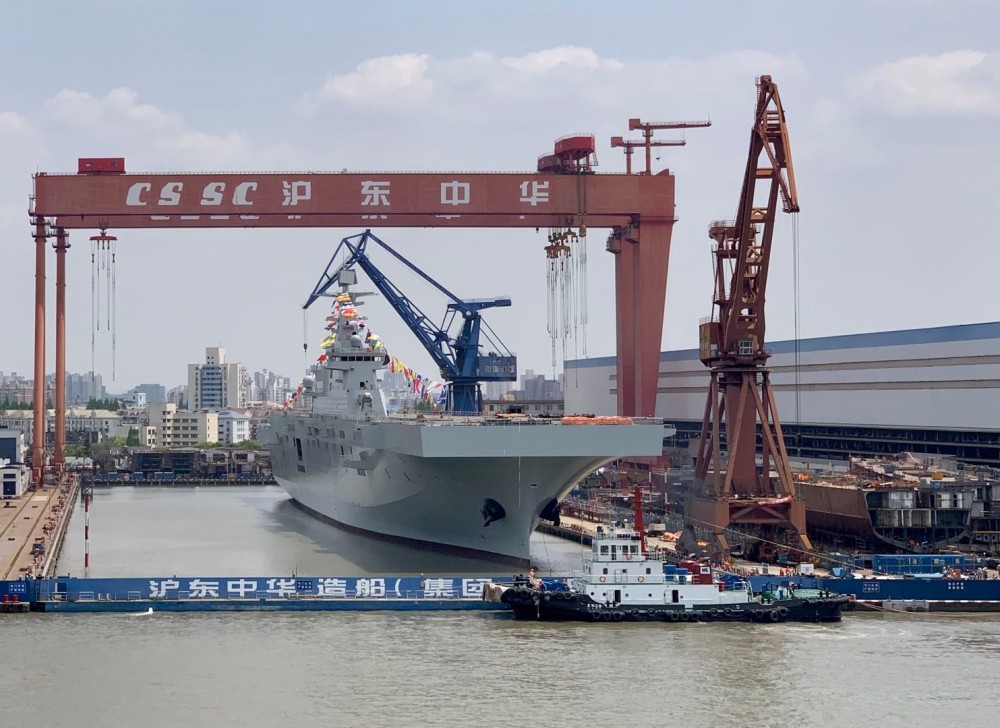 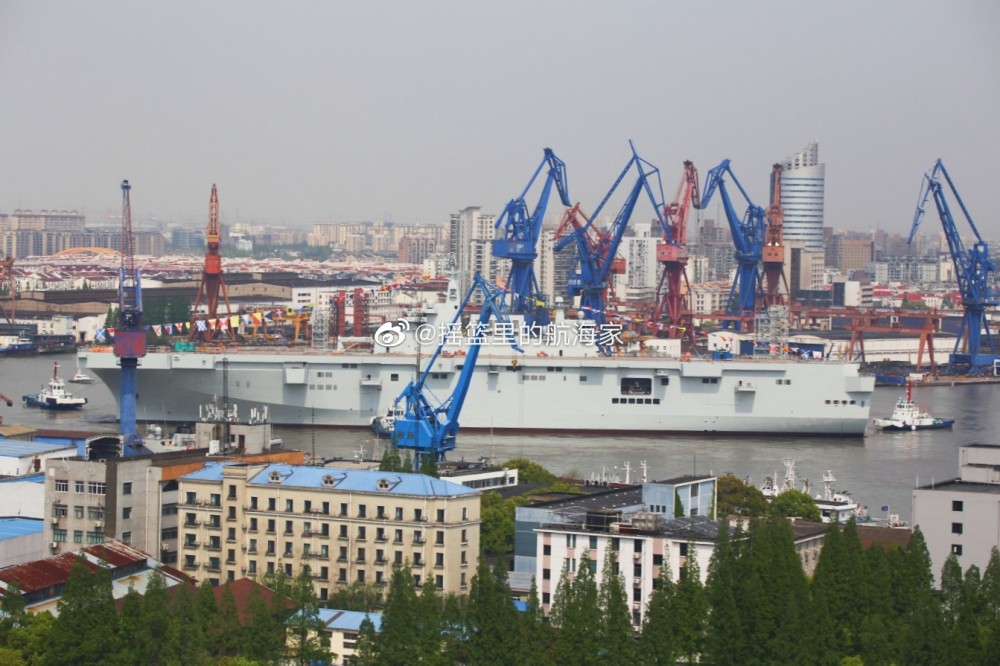 It should be considered as the 1st since the other one failed.
Sponsored content