Mediteranean is full of migrants destroying the unity of the EU. Caraibean sea is mostly used to send cocaine in the US destroying their population. Why China would  bother making it safer ?

But all those countries send lots of ships to visit the islands they built in the South China Sea, and they didn't follow the rules or tidy their mess afterwards.... it is pretty important that China sends ships to those places and does the same... in the interests of freedom and peace and openness...

If Britain does not recognise the Russian occupiers of the Crimea then why should China accept the American and British occupiers of Guam for example?

Wouldn't it be amusing if China and Russia both sent ships to circle the British isles in about 5 or 6 groups so that the Royal Navy didn't have enough ships to escort them all with more than one ship each... Britannia no longer ruling the waves? 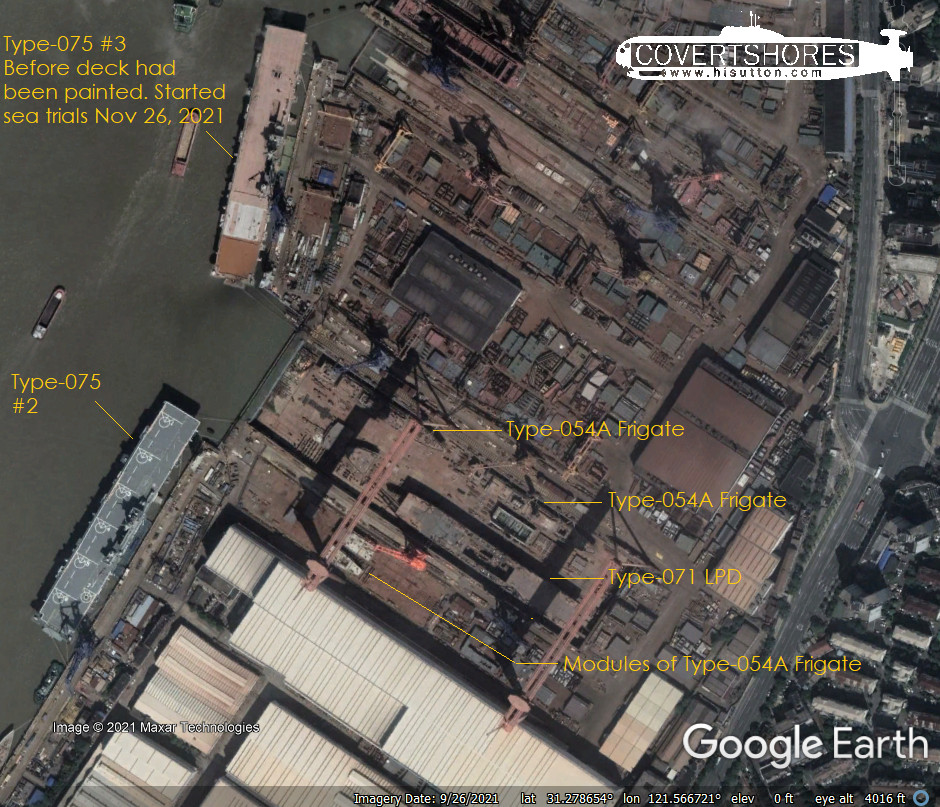 Progress is really slow on Type 075. They only have 1 operational ship despite 3 built.
Mir

Building rate has been very fast though. They're probably sorting some of the issues on the first one before they will finish off the next couple. It will save time and money.
walle83

Bob Bollusc wrote:Progress is really slow on Type 075. They only have 1 operational ship despite 3 built.

The first was comssioned in 7 months after launch, the second will be about 8 months and the third probably only a few months later.
Hole

Construction is one thing. You need a decent crew for each ship. That takes time. Or they will ram some oil tanker or freighter every time they leave the harbor.

Hole wrote:Construction is one thing. You need a decent crew for each ship. That takes time. Or they will ram some oil tanker or freighter every time they leave the harbor.

I would not be surprised if they rotated in some of the crew they used in the Type 071 LPDs and Type 001/2 carriers to speed things up.

Progress is not slow on this class of ship, this is a new ship type that is new for China and may take years of operational experience to work out potential tactics and usefulness for these vessels...

Other countries have experience with this sort of ship, but new technology... specifically drones... air, land, sea, and underwater drones offer enormous potential for them to expand the capabilities of these ships to allow all sorts of new options for the Chinese Navy, but they need to test and train and learn and to do that right it takes time and work.

I am very much looking forward to their first operational testing of the ships, perhaps in a round the world voyage to really give it a thorough test and work out, but obviously they need to make sure everything works properly first.
walle83 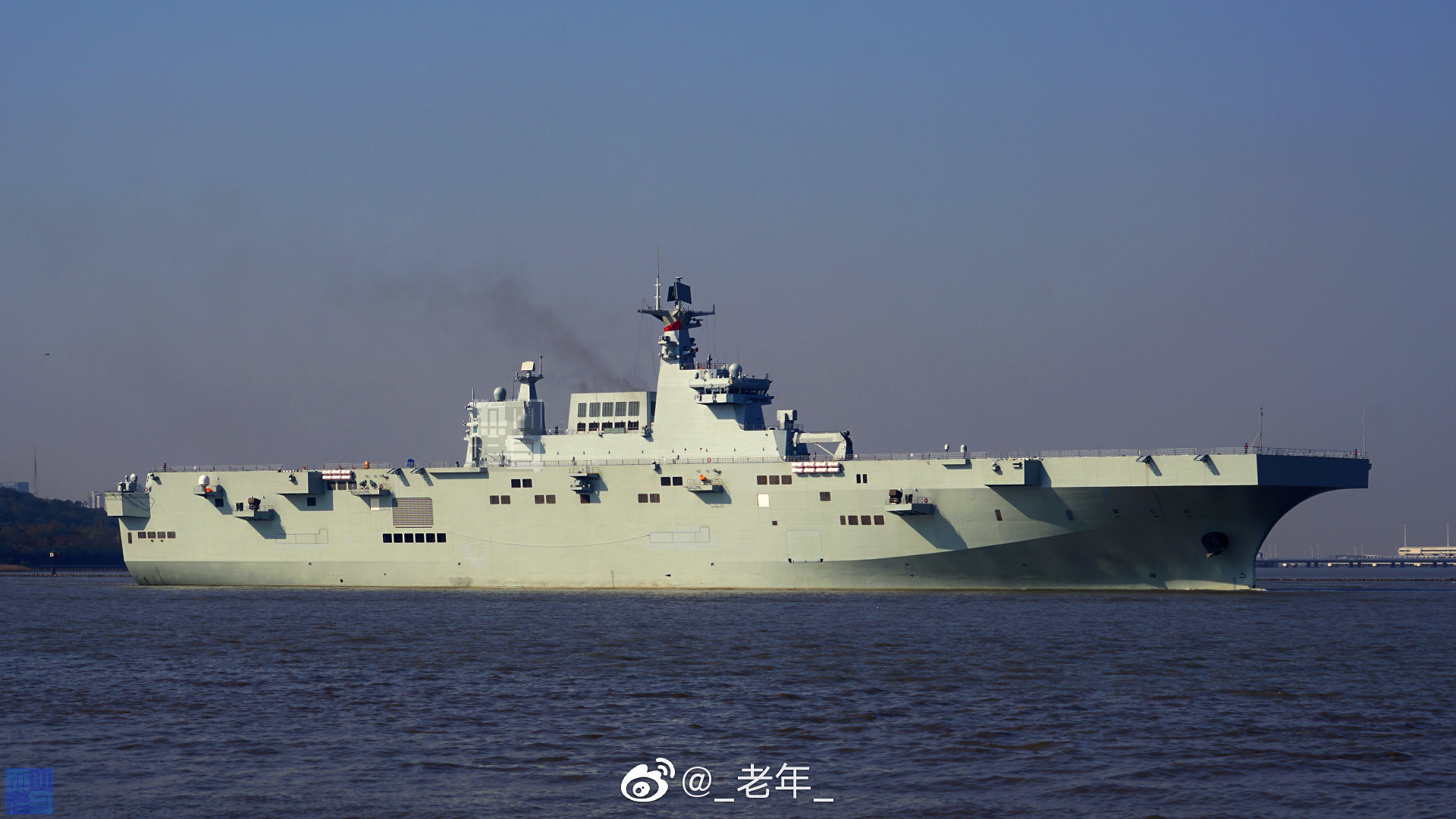 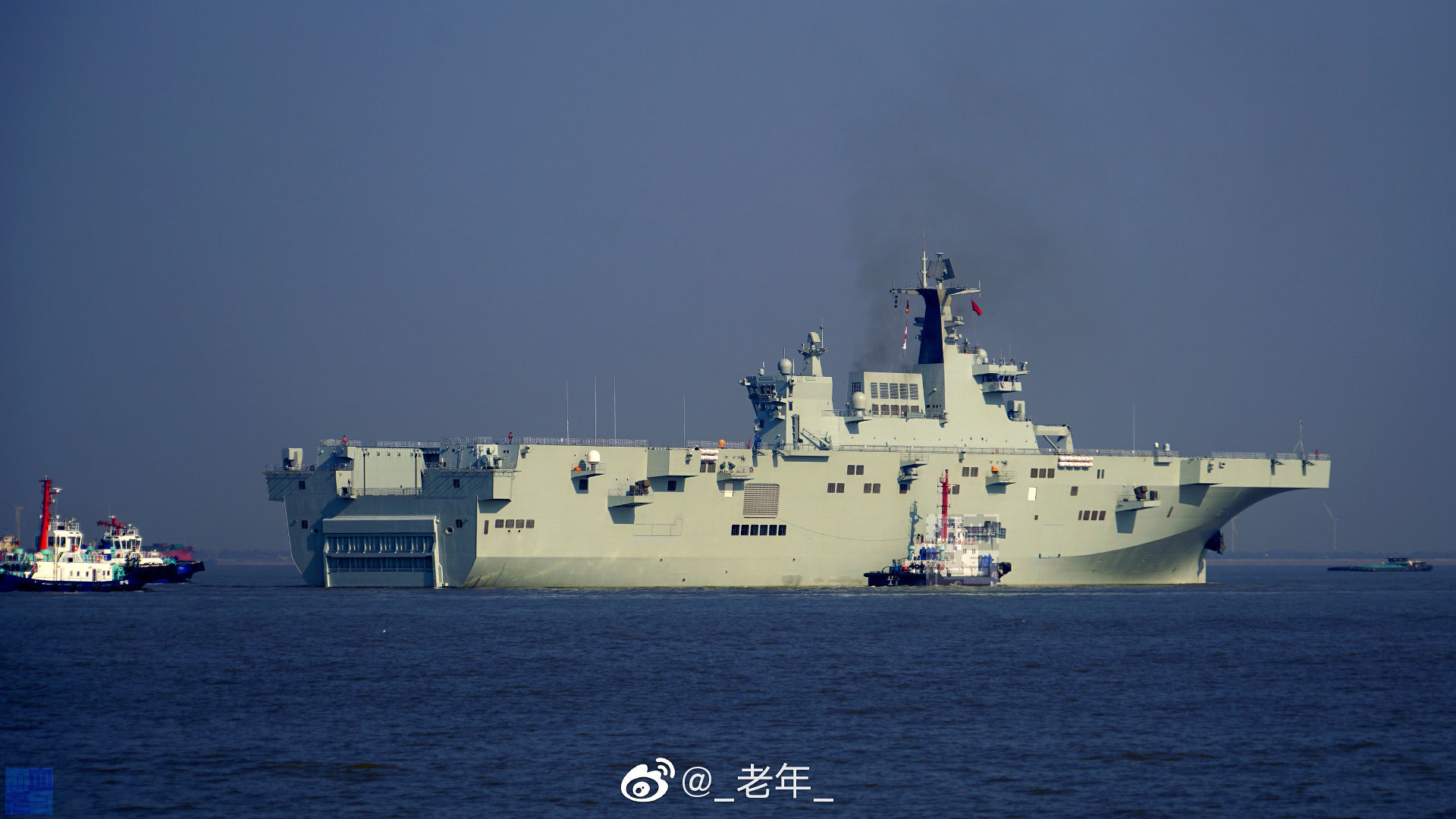 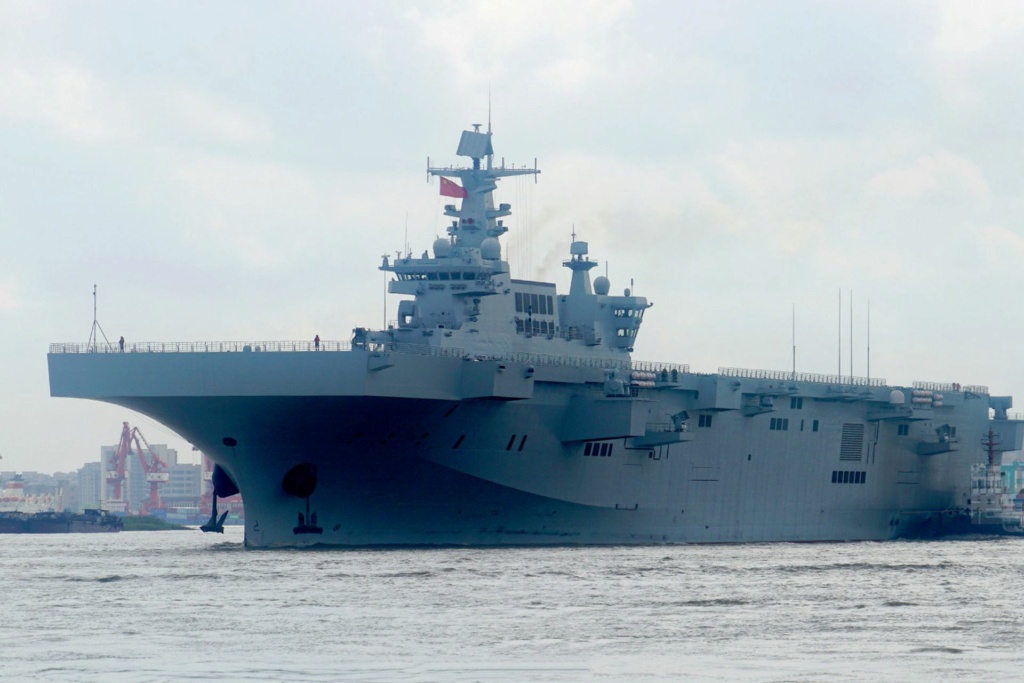 They are comissioned faster then the US America class so you cant complain.
Also this is Chinas first full deck amphibious assault ship so of course this will take some time to get right.

To be honest, with the pace they progress, probably they need something better instead of more of this.

After all they don't even have vartical take off planes, what to do more than 3. Next steps, to put a nuclear reactor and to make a plane.
walle83

Hannibal Barca wrote:To be honest, with the pace they progress, probably they need something better instead of more of this.

After all they don't even have vartical take off planes, what to do more than 3. Next steps, to put a nuclear reactor and to make a plane.

The Type-076 with catapults is the next thing. Im gessing 3 more type 075 in the next years and then they are moving on.

All that really matters is that Japan and Taiwan and the US should be worried... their capabilities just took a serious step forward.
Mir

walle83 wrote:
The Type-076 with catapults is the next thing. Im gessing 3 more type 075 in the next years and then they are moving on.

Russia and China will most likely use UAV's on these type of ships instead of developing expensive VTOL fighters.

walle83 wrote:
The Type-076 with catapults is the next thing. Im gessing 3 more type 075 in the next years and then they are moving on.

Russia and China will most likely use UAV's on these type of ships instead of developing expensive VTOL fighters.

Precisely. Why waste years and billions developing something when you can use things you already have to get the same results. Probably better even.

More fundamentally, they don't need fighters on helicopter landing ships... the hint is in the name... they need helicopters.

They will be building fixed wing carriers with sensible fighters able to take off conventionally or using cat assistance that will be much more capable than any VSTOL fighter aircraft ever developed for rather less cost based on an existing land based type, or if it is the new MiG twin engined model they go for on aircraft carriers as the light aircraft (together with a navalised Su-57) then a land based model makes sense as well... but some unique VSTOL fighter that only operates on helicopter carriers is a ridiculous waste of time and money... even a Ka-52K with AESA radar and AAMs with solid rocket boosters fitted to restore their flight performance to that of the same missile launched higher and faster in a fighter aircraft would be cheaper and easier.

In fact a few Ka-52Ks with AESA radars in the air checking sea level from 2-3km altitude would be a very good way of making sure no one surprise attacks you while your AWACS platforms are not up, but then they will have Ka-31s too for the same job... a proper AWACS type makes more sense but having a mix of all three is a good thing... a Ka-52K with AESA radar would actually be very useful against ground forces and sea surface forces and could probably carry APR-3ME torpedoes too... there is a wing pod mounted radar for the Khrisantema... why not a wing pod mounted dipping sonar for launching torpedoes or dropping depth charges too?

An Mi-38 version of the Mi-14 would be a good thing too... perhaps China and Russia could work together on a new naval helicopter for coastal patrol and operating from large ships?
Mir

I have a hunch that the Minoga will make an appearance in 2022. It was speculated that it would debut in 2019 already but I think there was a slight change of plan. A replacement for the Ka-29 for the new helicopter carriers should take priority over an ASW variant. It may just be that the Minoga's first prototype could be an assault version rather than a ASW variant? The compact design of the Kamov helicopters makes the ideal for the Navy.

GarryB wrote:More fundamentally, they don't need fighters on helicopter landing ships... the hint is in the name... they need helicopters.

Agree, my point was, you need only 4-6 such ships and they already reaching this number. Not a ship to do more than an assault near the shore or a close support in the direct vicinity.

Are they going in Singapore, else there is no need for numbers of them.
walle83 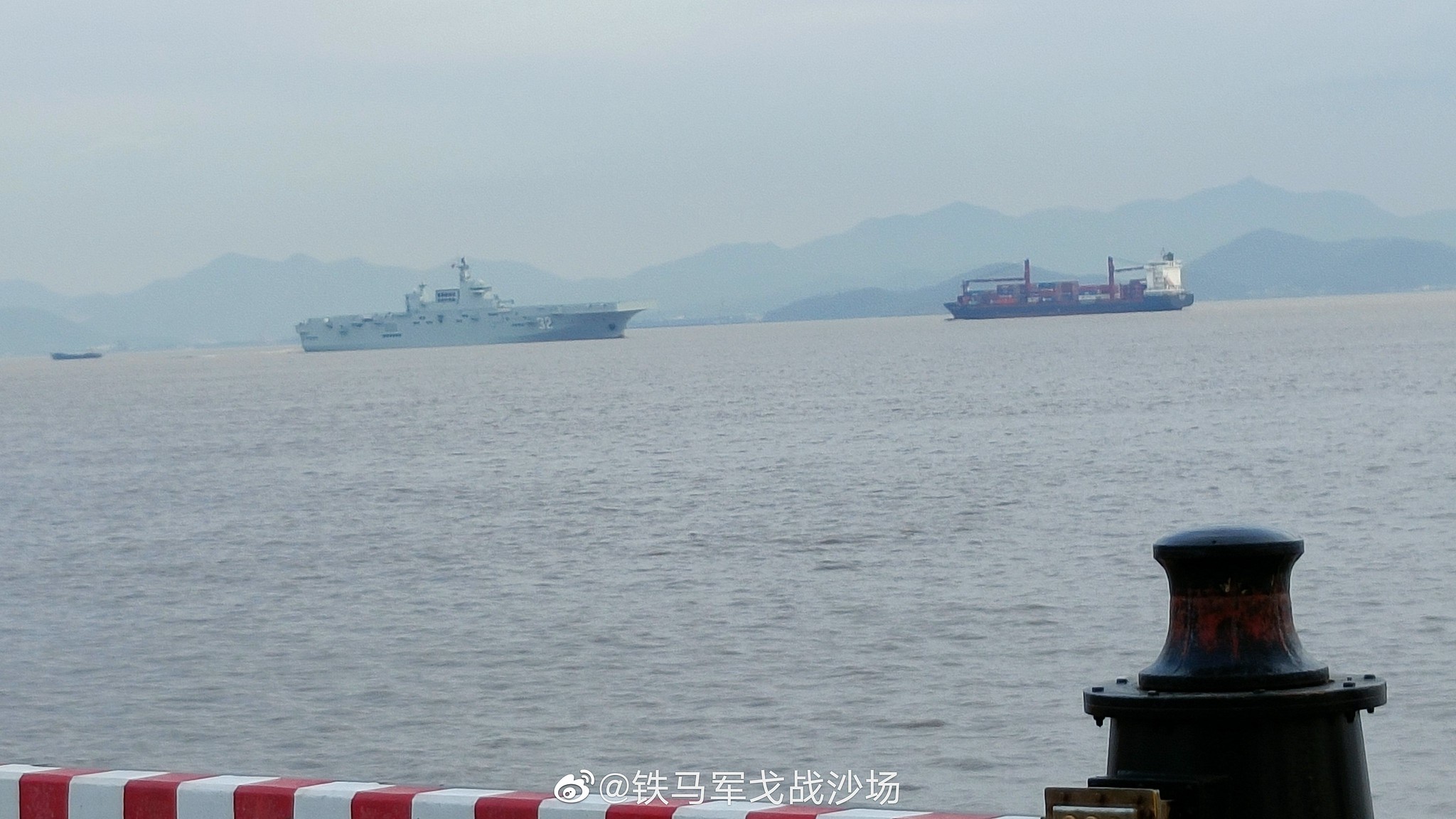 Are they going in Singapore, else there is no need for numbers of them.

That is another point... what do they intend to do with this sort of ship and their navy in general.

I rather suspect that like Russia they are losing faith in the west and realise there is the rest of the world out there starving for investment and trade from a non colonial power out to screw them over.

A good strong Army is great but to access the countries of the world and ensure your naval sea lines of communication and trade are not disrupted by another jealous power, you need a decent Navy.

To be clear the US Navy is intended to dominate the worlds oceans all at one time so neither China nor Russia would need anything like that big, they will only be ensuring their rights to use the ocean are not infringed, but that does mean being able to operate away from home for extended periods of time completely isolated from support and allies, which means aircraft carriers and cruisers and destroyers.

For China and Russia there is the risk of the west interfering with the governments of the countries they trade with... obvious cases already include Iran and Syria and Venezuela, so to prevent the US and EU from bullying rest of the world countries out of trade deals and trade relations with Russia or China both countries need to turn up in those places with force so they can sail through blockades and other western BS.

I am sure China knows exactly what they are doing.

China is expecting either a US collapse or a confrontation with them and these ships are to protect their trade along the Maritime Silk Road.

A lot of people say it is about Taiwan. But Taiwan is so close to the Chinese mainland they can just fly from there.
They would need some troop landing ships for an actual occupation with boots on the ground but they already have loads of those.

too slow construction after the first ship
Sponsored content