From the dry dock at the 35th shipyard in Murmansk, where the aircraft-carrying cruiser "Admiral Kuznetsov" was placed, the water was pumped out, the ship stood on the cages. This was reported by a source in the Russian defense industry.

The only Russian aircraft-carrying cruiser "Admiral Kuznetsov" is moving to the dock repair stage. Back in May of this year, the aircraft carrier was put into dry dock at the 35th shipyard in Murmansk, after which work began on restoring the bridge and pumping out water. The thing is that the batoport for the dock has not yet been made, it will be installed only next year, so the jumper had to be made temporary, after which the water should be pumped out. It took almost two months for everything about everything, and now the ship stood up on special devices designed to keep it in dry dock (cells - approx.). Dock repair of the cruiser will begin in the coming days.

The other day, being in the dock of the 35th plant, the aircraft carrier stood on the cages. This paves the way for the start of her dock repairs, tentatively within the next week.

As already reported, work in the dock with the ship should be completed before September, after which the "Admiral Kuznetsov" will be taken out of the dock and put back to the outfitting wall. As stated, all work on the cruiser is going according to plan.

Earlier, another source in the defense industry reported that the heavy aircraft-carrying cruiser "Admiral Kuznetsov" fleet will return no earlier than 2024, since the scope of work on the ship has increased significantly, in the course of the work carried out on the ship, previously undetected defects were revealed.

Hole wrote:These sheds in the right corner of the pic should be painted in another colour.

They might be portable toilet blocks. Yellow and blue would be appropriate in such a case

To start the dock repair of the aircraft carrier Admiral Kuznetsov, the dock of the 35th SRZ was drained

In the coming days, work will begin on the cruiser, the source said.
MOSCOW, July 28. /tass/. The dock of the Murmansk 35th Ship Repair Plant (SRZ, a branch of the Zvezdochka Ship Repair Center, part of the United Shipbuilding Corporation) has been drained to start repairing the heavy aircraft carrier Admiral of the Fleet of the Soviet Union Kuznetsov, work will begin in the coming days. This was reported to TASS by a source in the military-industrial complex of the Russian Federation.

"There are no obstacles to the start of dock repairs of the Admiral Kuznetsov aircraft carrier. The dock at the plant is drained, " the source said, adding that work on the cruiser will begin in the coming days.

The press service of the Zvezdochka Ship Repair Center did not comment on the source's information to TASS.

On July 19, a TASS source reported that while in the dock of the 35th SRZ, the aircraft carrier stood on the cages (devices on the bottom of the dock on which the ship's hull is installed-approx. TASS).

The aircraft carrier was docked in mid-May. It was assumed that then it would take two months to restore the bridge and pump out water. It was also reported that the Severodvinsk plant " Sevmash "in 2022 will build a batoport as part of the technical re-equipment of the dry dock at the Murmansk 35th SRZ, which will undergo dock repairs of the cruiser"Admiral Kuznetsov". This was announced to TASS by the company's General Director Mikhail Budnichenko on the occasion of the Submariner's Day, which was celebrated in Russia on March 19. The batoport will replace a temporary bridge in the dock.

Some pics of the dry dock after draining: 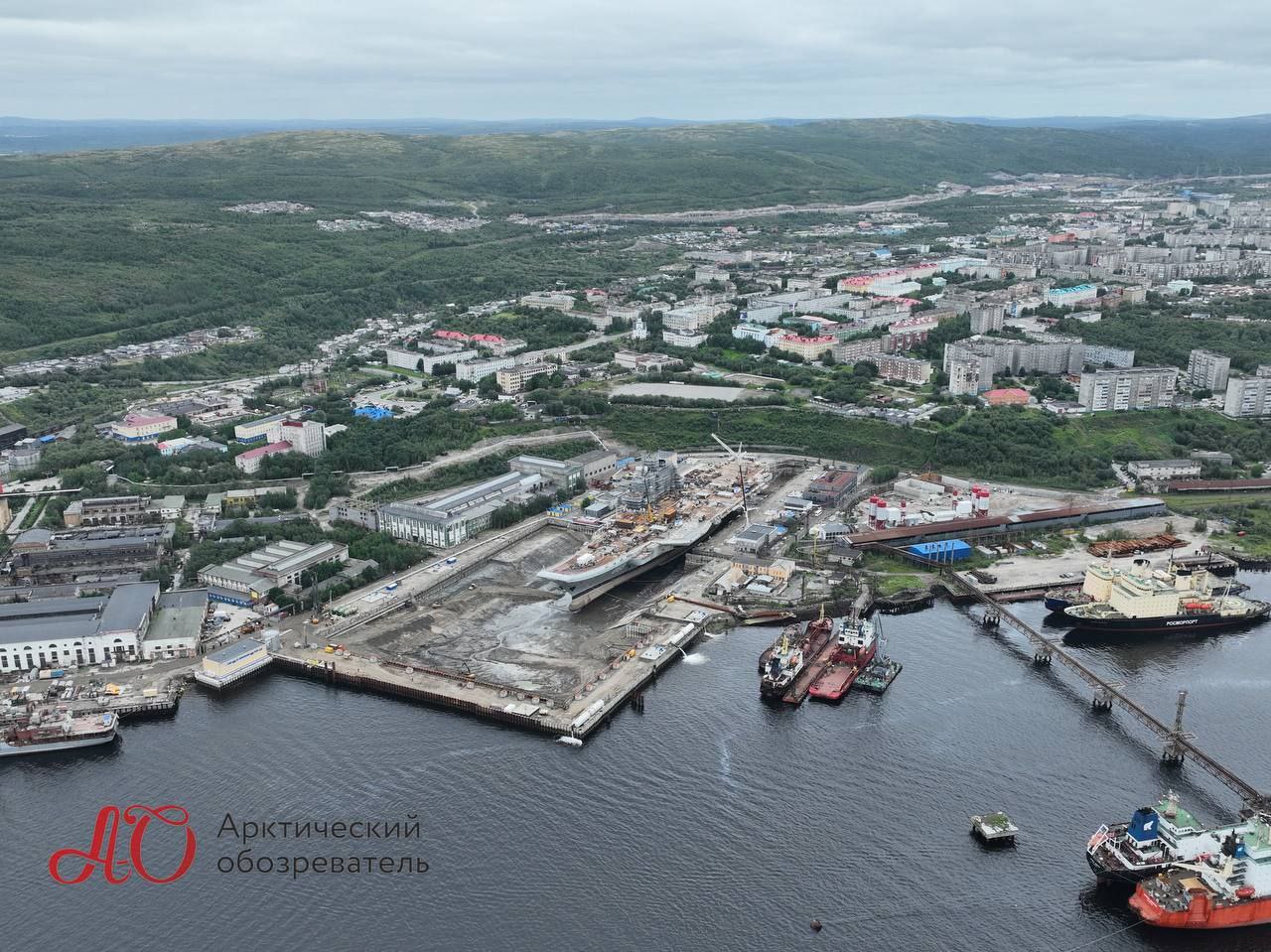 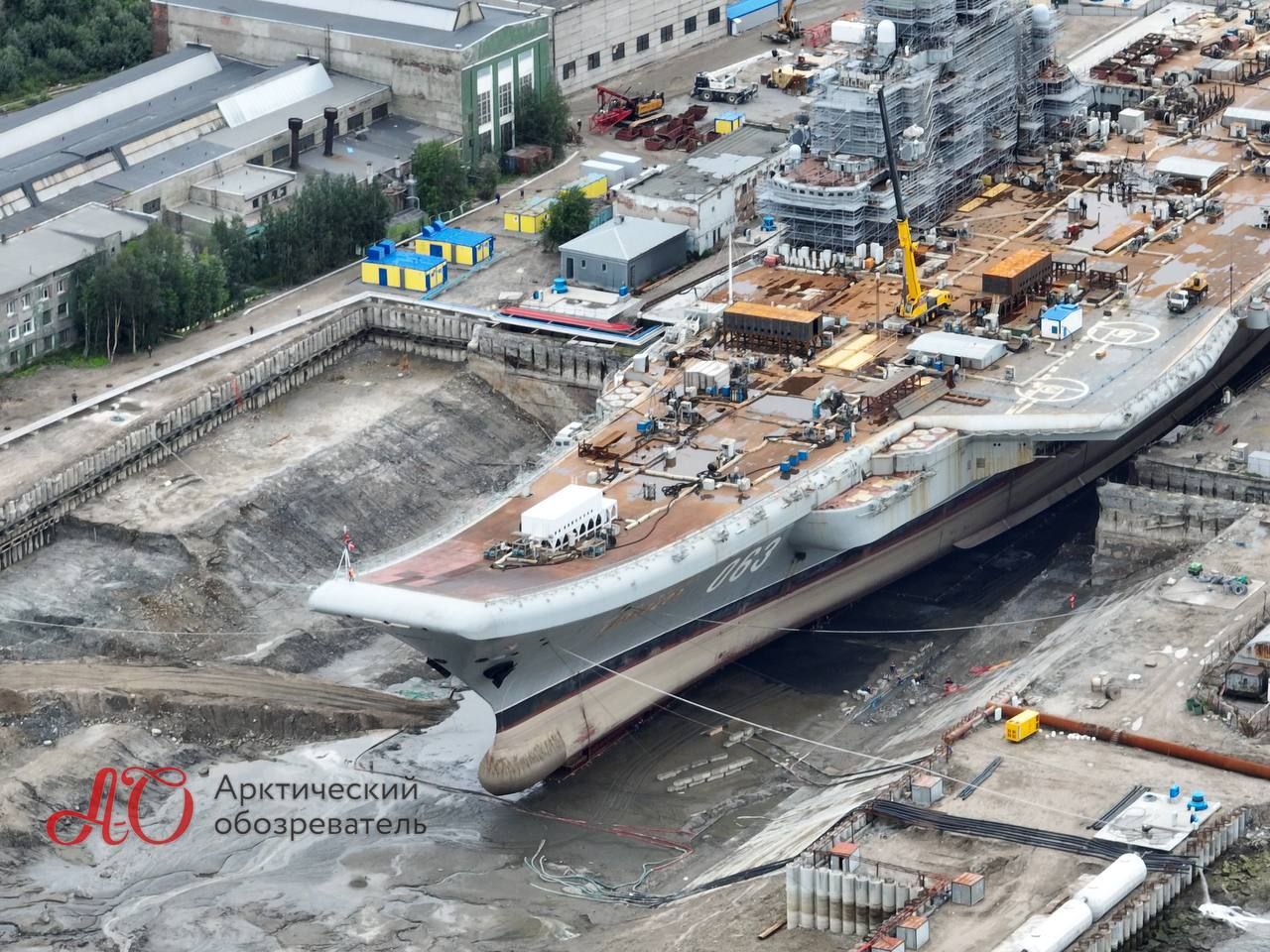 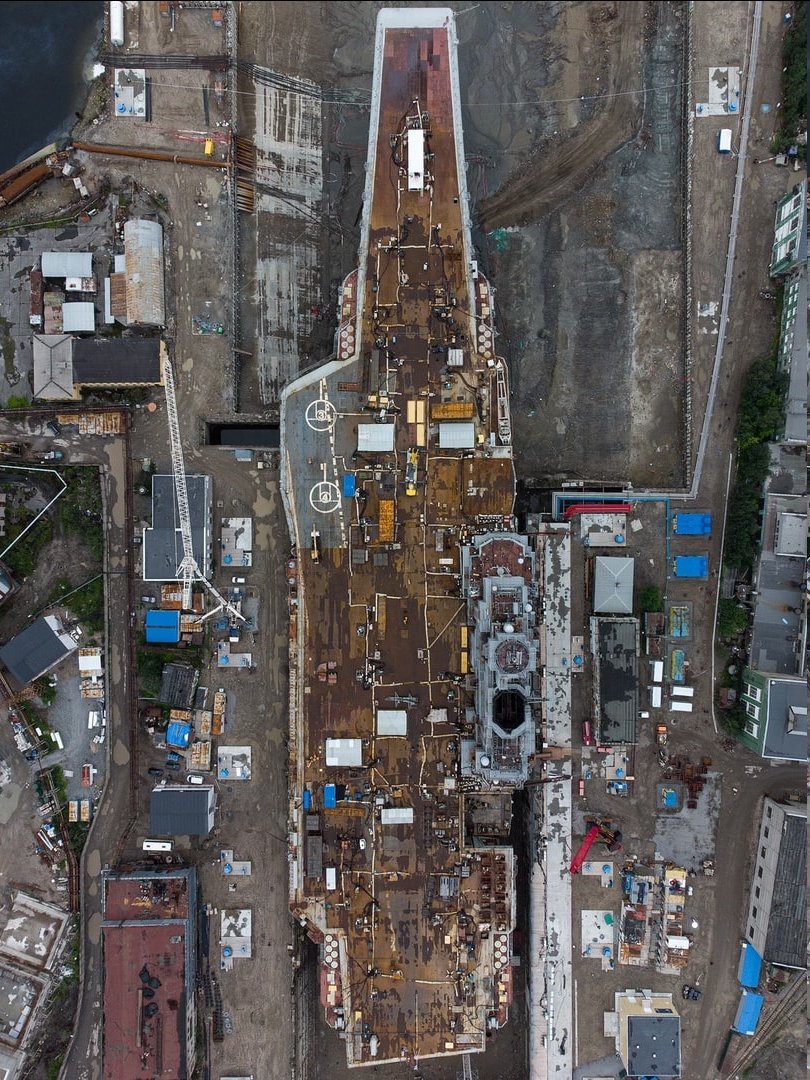 Would it kill them to splash some concrete down there?

So they started using the drydock before it was even finished?

Yes, obviously... you don't pull a 400 m dry dock out of your anus as if nothing

Would it kill them to splash some concrete down there?

Wouldn't make much difference... they still need to spread the weight of the ship over the same sort of area to stop it from sinking and it would not be much different whether it was rock or concrete.

They appear to retain the old TOR system, the launch tubes at the corner of where the takeoff ramp and the landing strip are... those 6 big white circles are based on the original TOR with 8 missile tubes in a rotary launcher. Each of those represents a single land based TOR from the 1980s, so 6 vehicles with 8 missiles each on each corner of the ship.

It should be fairly straight forward to replace those with the newer smaller missiles in a fixed grid array of 16 missiles each to double the TOR missile load from 192 to 384 missiles without using any extra space.

Of course fixed grid vertical launch tubes would take rather less space than an 8 round rotary launcher so you could get a lot more in than that really.
kumbor

Shipboard TOR is not a TOR, but KINZHAL. Do not mix up with new hypersonic air to surface missile.
GarryB

That is why I call it TOR, and it is not even the current land based TOR with 16 missiles ready to fire, it only has 8 missiles in a rotary arrangement.

Upgrading to the current TOR missiles would allow double the missiles carried in the same space... the new reduced sized anti drone models are even smaller and so a mix of the two new types would allow a lot more ready to fire rounds and versatility against a range of target types too.
kumbor

Eight round revolving underdeck launcher is the standard firing unit of shipboard Kinzhal. Eight-round launchers are usually grouped in a group of three or four in various combinations. Although modular, it is rather bulky and heavy.

Some high-rez pics of the K getting tarted up... 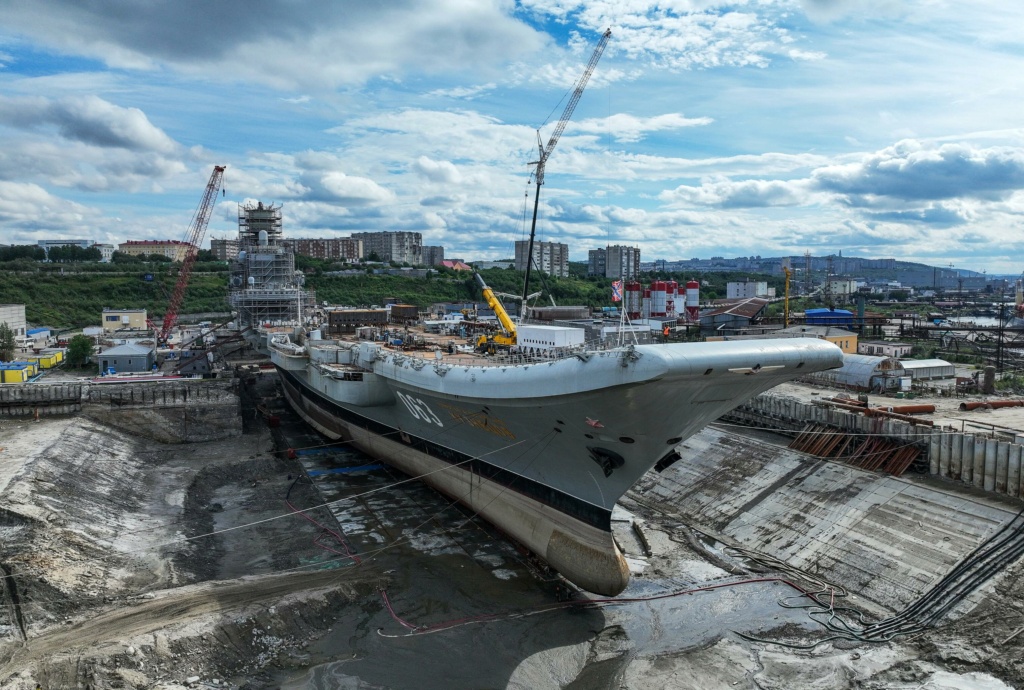 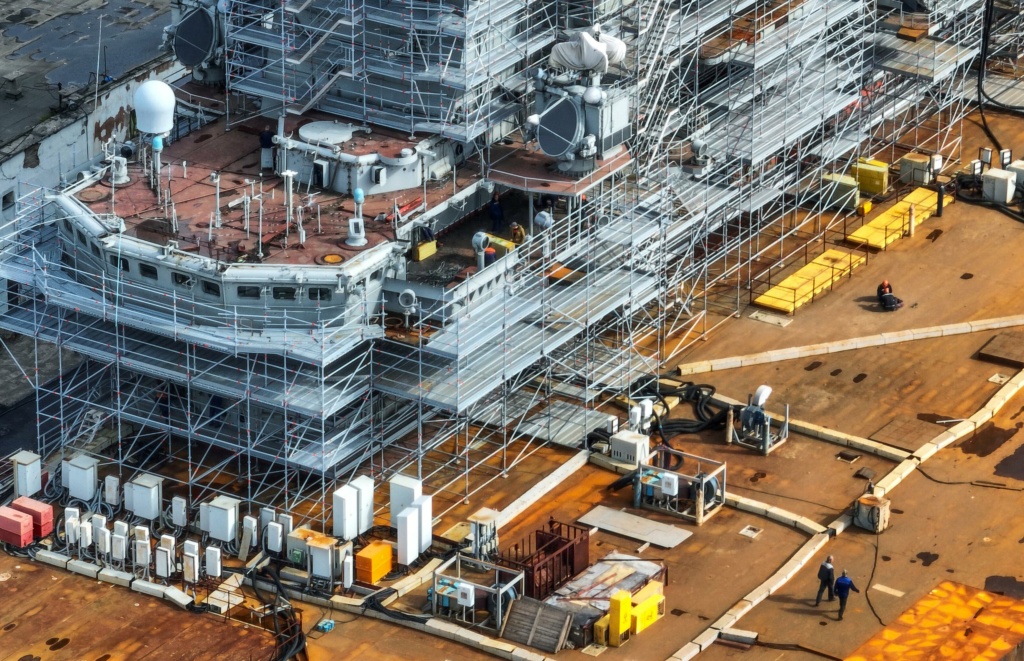 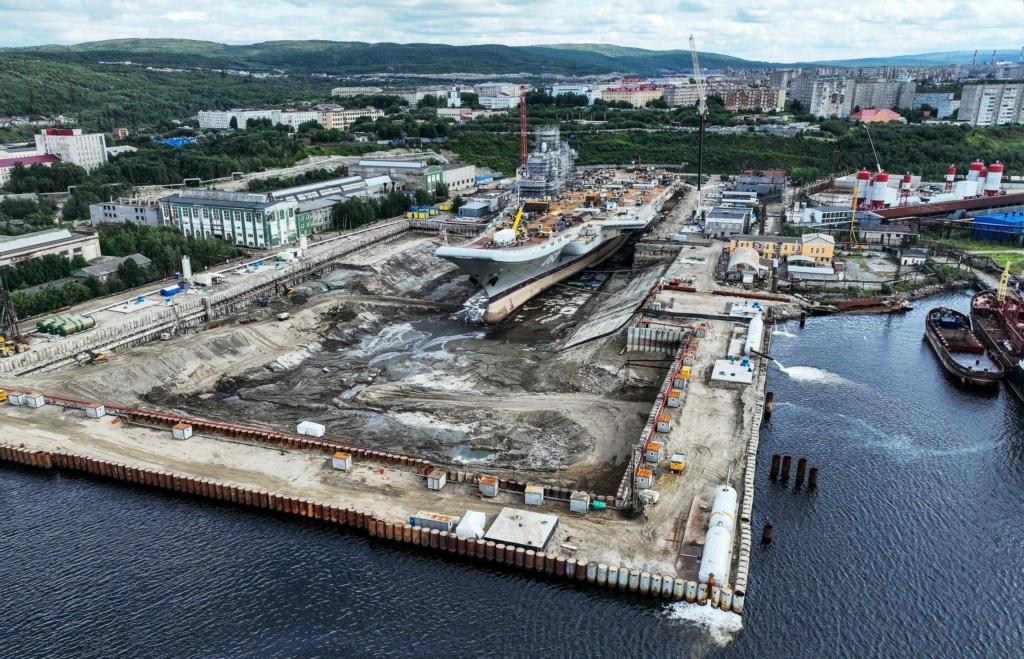 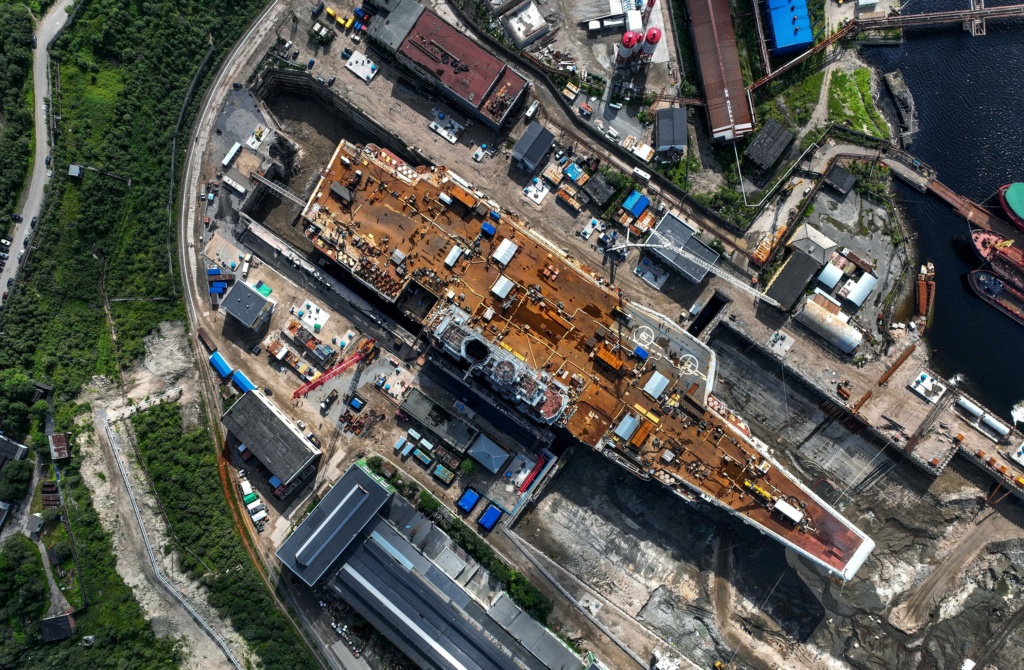 This "dry dock" (or should that be "mud pit"

) isn't a permanent structure, as other than some retaining walls and the concrete pad for the K and her supports, much of the interior is unimproved. I wonder if the gov will develop it further into a proper dry dock with a cassion gate once the K is done, or whether they will just demolish the cofferdam and reinstate the old facility?
GarryB

Eight round revolving underdeck launcher is the standard firing unit of shipboard Kinzhal. Eight-round launchers are usually grouped in a group of three or four in various combinations. Although modular, it is rather bulky and heavy.

It was, but only for the naval version of the missile to allow under deck inspection and testing of each missile... they did something similar for the naval BUK and Rif type missiles too.

The thing is that a circle of 8 missile tubes takes up quite a bit of under deck space... not to mention the mechanism that rotates the tubes to the launch hatch for launching... the only advantage is that it reduces by a factor of 8 the number of missile hatches you need, but in comparison missile hatches are simple and cheap and having one hatch for each missile simplifies the whole thing and makes for a much more compact design where every missile is ready to launch all the time and you can check the health and readiness of each missile electronically before launch.

The location of the tubes means a pallet of launch bins could be stored inside the ship and driven out and have the old bins raised up and put to one side and full missile bins lowered into place and the old pallet taken away and checked and any fired missile tubes reloaded ready for reuse.


This "dry dock" (or should that be "mud pit" Laughing ) isn't a permanent structure, as other than some retaining walls and the concrete pad for the K and her supports, much of the interior is unimproved. I wonder if the gov will develop it further into a proper dry dock with a cassion gate once the K is done, or whether they will just demolish the cofferdam and reinstate the old facility?

I think moving forward they are going to have more and more rather large ships... civilian and military... so any extra dry docks they can have on hand would be valuable... big ones allow smaller vessels to be worked on in groups as long as you can schedule filling and emptying times to suit each project.

I would say the few months it would take to empty the dry dock and then lay down enough cement to do the job to the thicknesses needed to hold the weights involved and of course waiting the necessary curing time for the cement would tie the dock up for longer than they would prefer, so using it without a cement base was saving time and making better use of available resources... or perhaps they are running out of cement...

Big_Gazza wrote:This "dry dock" (or should that be "mud pit"

) isn't a permanent structure, as other than some retaining walls and the concrete pad for the K and her supports, much of the interior is unimproved.   I wonder if the gov will develop it further into a proper dry dock with a cassion gate once the K is done, or whether they will just demolish the cofferdam and reinstate the old facility?

It is unfinished, but they lost the PD-50 so they need a replacement, which in this case is much better. The gates are being built, but they didn't have them ready for the docking of the Kuznetsov. Obviously to destroy such a huge construction makes no sense. They were simply terribly late due to the fiasco with the first contractor and needed to do some emergency management.