2 sovremennyy destroyers written off, that leaves only 1 active

Active is a big word. Good to get ride of them since it will oblige them to hurry up with Gorshkovs.

People need to remember that almost every single new projects of the Russian navy, namely Pr.22350 and even the highly constrained Pr.20380/3/5 with 15 days endurance (that too for a navy with almost nil foreign base/friendly ports and hardly any fleet support/replenishment) has been monopolized by the most incompetent yard in Russia.

Isos wrote:Active is a big word. Good to get ride of them since it will oblige them to hurry up with Gorshkovs.

i agree. They can also proceed with udaloys modernization
Krepost 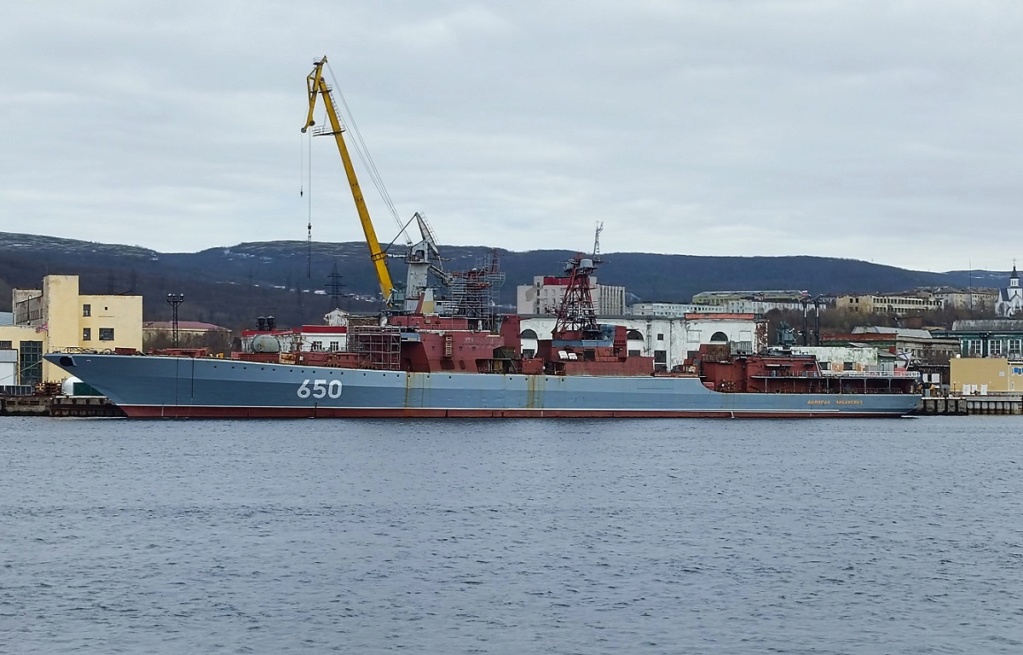 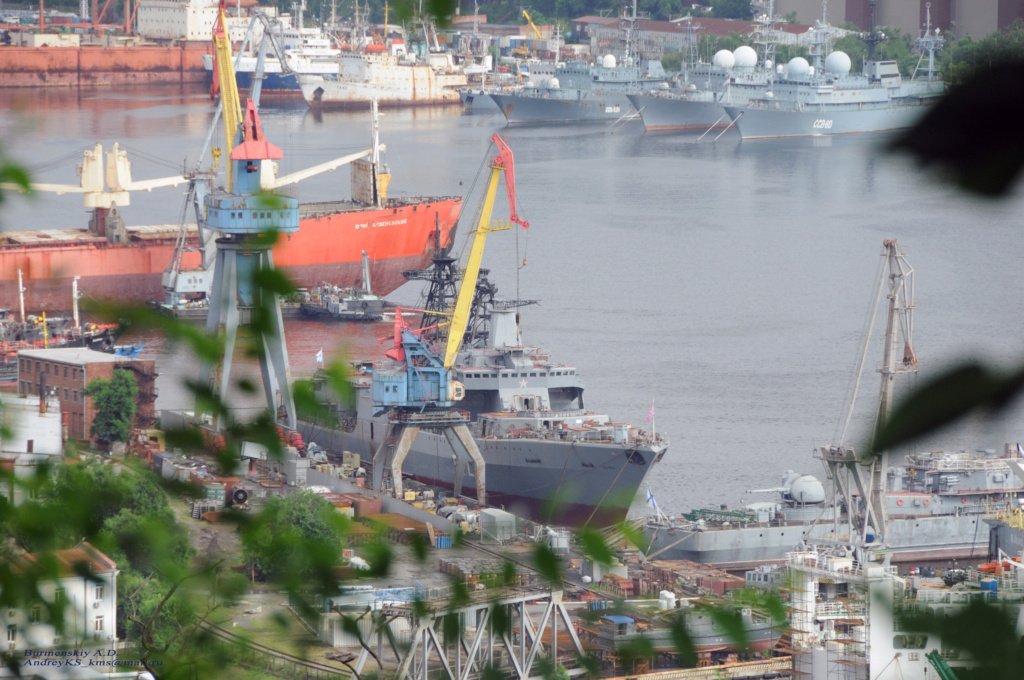 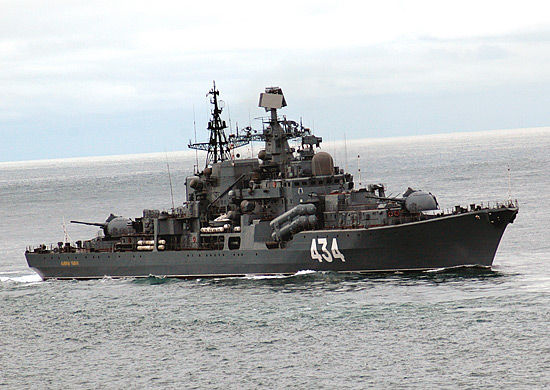 Novosti VPK, 24 August; As part of an exercise in the Northern Fleet with a grouping of diverse strike forces, the destroyer Admiral Ushakov practiced delivering a missile attack on a surface ship of a mock enemy.

The crew of the destroyer fired at a sea target with a Moskit cruise missile. The combat exercise was carried out in the area of ​​the Barents Sea, closed in advance to civil navigation.

Earlier, the crew of the destroyer "Admiral Ushakov" in cooperation with the heavy nuclear missile cruiser "Pyotr Veliky" worked out practical anti-aircraft missile and artillery missile targets as part of an air defense exercise for a detachment of ships at sea, the press service of the Northern Fleet reports.

Pacific Fleet; Image of the large Project 1155 anti-submarine ship in dry dock.
It is not written in the description of the picture on the Russian military forum which ship is in question. Apparently it is "Admiral Vinogradov". 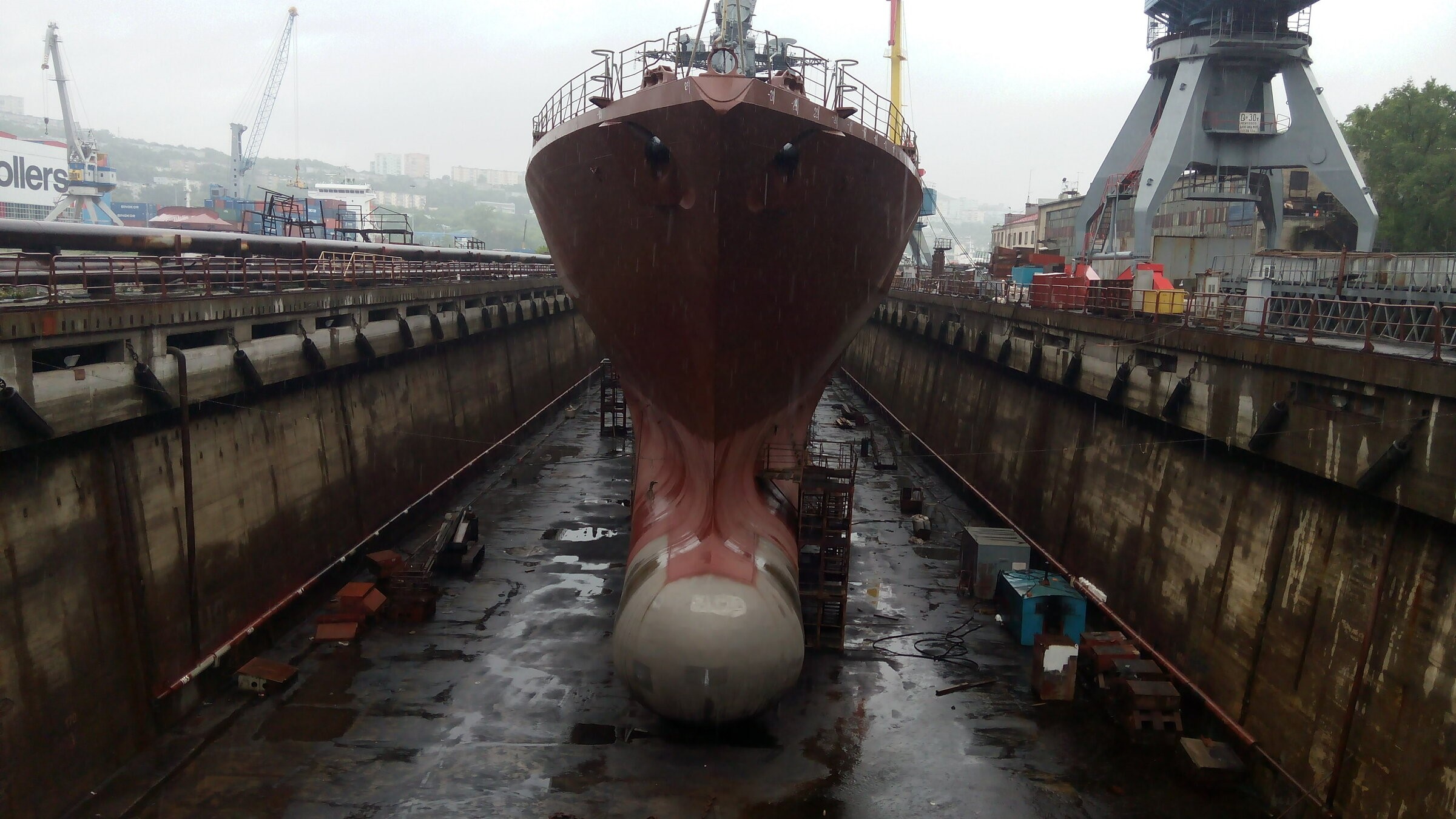 MOSCOW, 10 December. /TASS/. The large anti-submarine ship (BPK) of project 1155 "Admiral Vinogradov" of the Pacific Fleet (Pacific Fleet), following the example of the similar BPK "Marshal Shaposhnikov", will become a frigate by 2025, having received increased strike capabilities compared to its predecessor. This was reported to TASS by two sources in the military-industrial complex.

“The frigate Admiral Vinogradov is expected to return to the fleet in 2024-2025, after modernization it will receive increased combat power compared to the Marshal Shaposhnikov,” one of them said.

It is known that the main shock complex of "Marshal Shaposhnikov" after the modernization was "Caliber-NK". Another TASS source did not rule out that in the event of an increase in the combat power of Admiral Vinogradov, we can talk not only about Caliber-NK, but also about the latest Zirkon hypersonic missiles.
According to one of the interlocutors of the agency, the line for the modernization of the project 1155 BPK into frigates - and there are five such ships in the Russian Navy now, not counting Marshal Shaposhnikov and Admiral Vinogradov - will be continued. 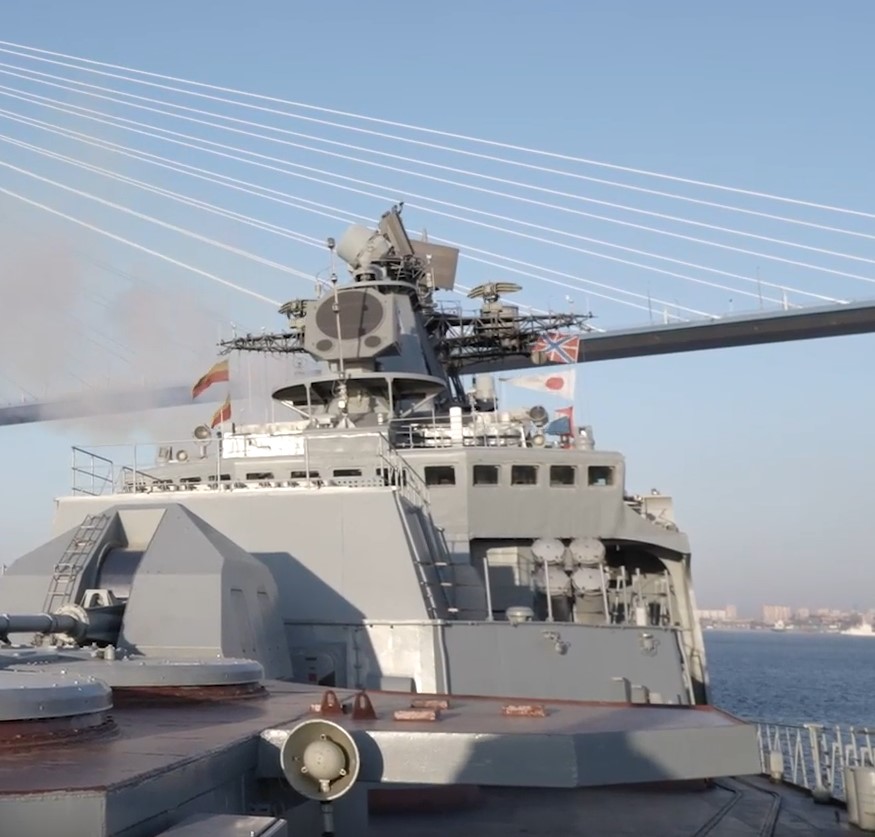 Nice look at the new radar on top of the bridge

Upgrades of existing types would be an excellent opportunity to test new technology on upgraded ships... they can test EM compatibility with other upgraded systems as well as performance and reliability and other features.

This way when they are looking at brand new ship designs (destroyer and cruiser types) it is not all brand new and experimental and untested.

The core of the problems with the Ford and the Zumwalt were that so many things were new it is hard to trouble shoot because the system displaying the fault or not working properly might be because some other system isn't feeding it the necessary information and so the problem might be with a completely different system.... but when you fix that other system you might find that effects something else and that other system was changed to the faulty state to get a third system to work properly.

Not to mention millions of lines of software code to get it all to work together properly and most of it will be fully multirole so it all needs to be tested in different roles in different temperatures and different situations against different targets... the testing needs to be comprehensive just to make sure no parts are actually faulty to start with.

Testing them on other platforms first is a great way to isolate them and get them working and then the experience of trying to integrate them into other upgraded systems will be valuable because the upgraded systems should be similar to the new systems they will be working with in the new designs.

You also get to increase production of new systems which should help with reducing the costs and also getting the new ships into serial production when everything is all ready.

Udaloy are really nice ships. Excellent propulsion, nice size, fast, long ranged. If they can get good life out of them, it makes a lot of sense to do these major upgrades. Great looking ships as well. Somehow when a ship looks right it seems to work well.

Most important is that they still have 8 of them in fine condition, so the series is worth investing in.

They designed the project 21956 as a follow on that is based on Udaloy design. But they went for missile boats and corvettes and the complicated Gorshkov design.

With some modifications it could have Tor launchers, 32 uksk, 4 phased aesa radar in an integrated mast.

Isos wrote:They designed the project 21956 as a follow on that is based on Udaloy design. But they went for missile boats and corvettes and the complicated Gorshkov design.

With some modifications it could have Tor launchers, 32 uksk, 4 phased aesa radar in an integrated mast.

That thing would become an obsolete waste of dock space the moment the first Lider class hits the water. It has absolutely no defense against ballistic or hypersonic missiles and an insufficient sumber of air defense missiles to operate outside of Russian waters.
GarryB

The upgraded models are considered long endurance frigates so once there are actual destroyers and perhaps cruisers they wont be used for long range roles anyway.

It makes sense to upgrade them... upgrading on a regular basis is how you prevent ships from becoming obsolete and vulnerable... if the Moskva had been properly upgraded it would likely be still doing its job, and doing it well.


There is no substitute for bigger ships... more missiles and larger sensors make a real difference... but considering Russian Corvettes are better armed and equipped than most western destroyers then often anything is better than nothing.

But they went for missile boats and corvettes and the complicated Gorshkov design.