Its seems that Mi-28NM will be whole new beast.


Popov: Mi-28nm will be very different from the prototype
TR1

Good photo, shows the cutout on the fuselage due to the expanded transparency of the gunner.
CaptainPakistan

Why are the Russians wasting money on the Mi-28 when they can have the Ka-52, arguably the best chopper in the world?
calripson

Two production lines and the Mi28 is a better export product. They can probably make a nice profit on the exports of Mi28 over the next 10-15 years.
GarryB

They are different enough to both be useful.

The Hokum is more expensive but has advantages at high altitudes and in hot conditions. The Mi-28 is cheaper to operate and use but is also very capable.

More importantly the upgrades to the Mi-28 can be applied directly to the Mi-24/35 family which also makes them rather useful and cheaper too as the Mi-24/35 is in very widespread use.

Also in terms of naval use the Kamov design bureau has a long history of cooperation with the Russian Navy and when putting a helo on a deck it is much safer if there is no tail rotor swinging round.
calripson

I was hoping to see it sooner but than again it will be substantially different machine and for that you need time.

WEST received another batch of "Night Hunter" and Mi-35
calripson

Only one base has received all 3 new attack helo types- the 393rd Aviation Base.
TheArmenian

WEST received another batch of "Night Hunter" and Mi-35

And here is a video of the event: 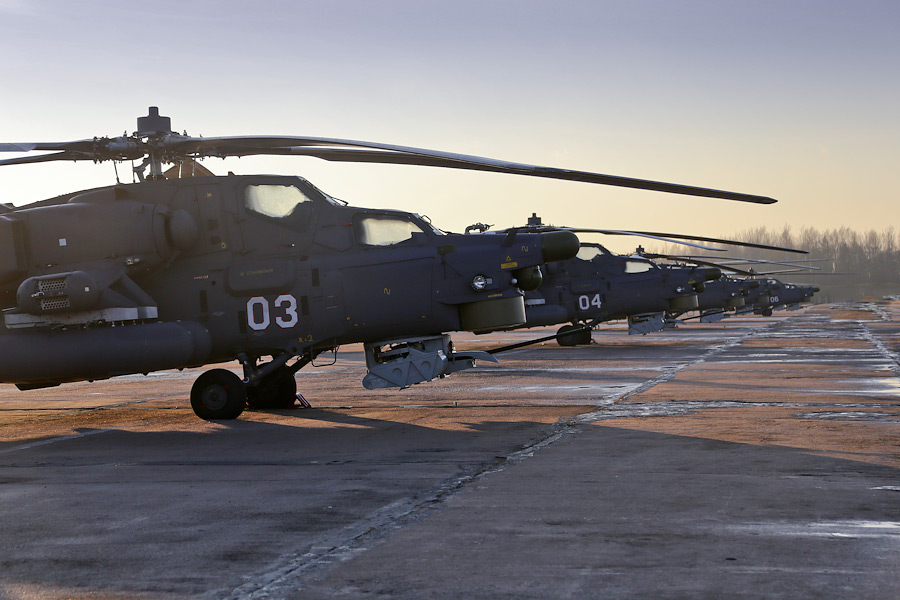 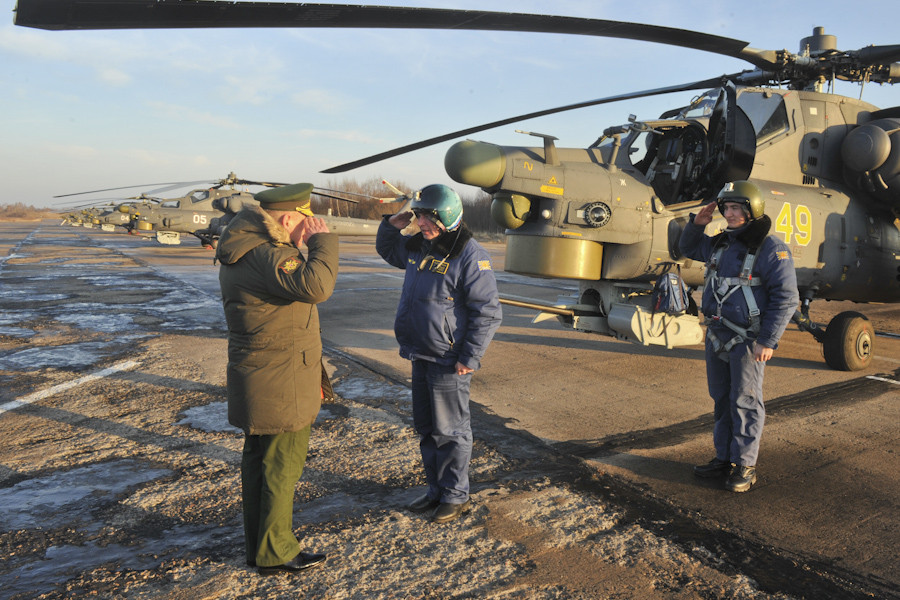 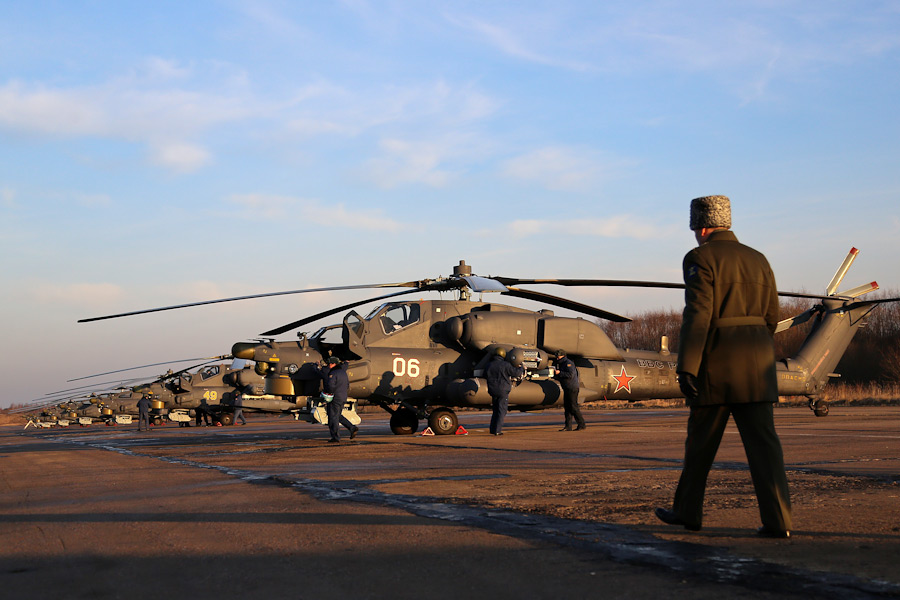 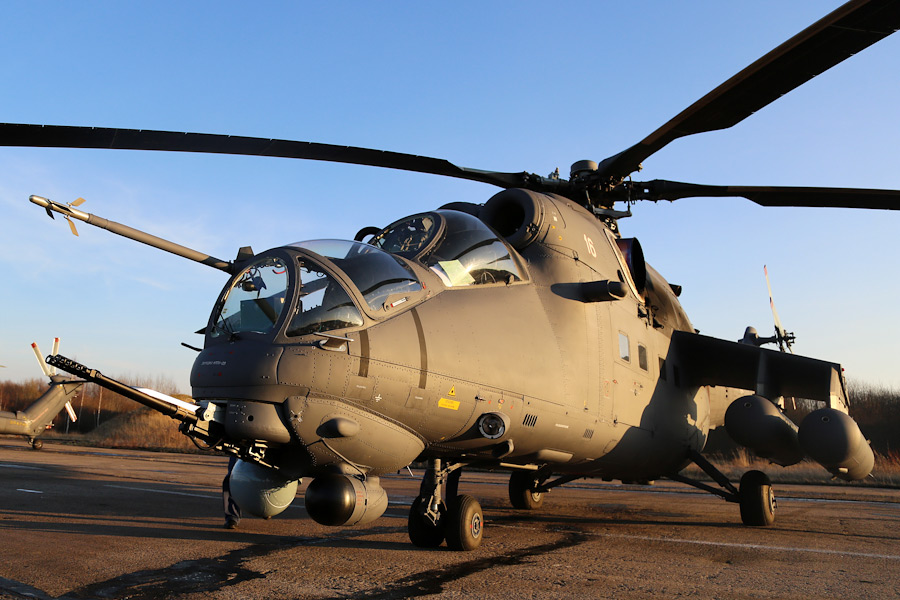 The rest of the pictures

Order was for 97 (30+67), though I have read that supposedly a third order was already signed. And they intend for 40-60 training birds, and of course the Mi-28NM when it is available. Though that maybe the third contact...I would be surprised if the total Night Hunter order is THAT big...it would mean in addition with Mi-35s (~50 birds) and Ka-52s (140+), the actual operational Mi-24 number is not only being replaced, but exceeded in the future.

I guess Russia sees choppers as the main anti-tank weapon of the air.
George1

The Mi-28N Night Hunter attack helicopter manufactured by Russian Helicopters Holding Company (subsidiary of Oboronprom Corporation, which is a part of Russian Technologies State Corporation) has been officially put into service by Russian Ministry of Defense (MoD). The corresponding order was signed by the Minister of Defense Sergei Shoygu on November 22nd 2013, press-service of Russian Helicopters reports.

“The official entry into service of Mi-28N testifies to the fact that the Night Hunter meets the requirements for a combat helicopter, it has passed all the necessary tests, and it is ready for operation as a part of the Russian air forces’ fleet”, - said Alexander Mikheev, CEO of Russian Helicopters. “The holding’s enterprises are not only successfully fulfilling the state defense order, but they are also working on upgrading the combat helicopters, which serve to strengthen our country’s defense potential”.

“The Mi-28N Night Hunter meets all the existing international combat helicopter requirements, and it is attractive for potential customers. The export model has the designation of Mi-28NE Night Hunter”, - the press-service explained.

“Russian Helicopters is constantly working on improving the aircraft performance of Mi-28N Night Hunter helicopter. A special Mi-28N with dual controls was developed for pilot training. The vehicle performed its maiden flight on August 9th 2013”, - the press-service noted.
medo

Russian start production of Vikhr ATGMs for RuAF for their Ka-52 helicopters, which they will use together with Hermes. Interesting is, that RuAF operational Ka-52 squadrons don't use Ataka missiles and they still fly without ATGMs. It seems Ataka is option only for export Ka-52.

I would like to ask, if Mi-28N will also use Vikhr missiles, which will come in RuAF arsenal? They will give longer range to Mi-28, that they could operate from safer distance.
GarryB

AFAIK the Mi-28N will use the ATAKA and possibly the Kristantema... both likely with flight ranges of 8km in their air launched versions.

I would suspect that the companies just want to keep their standard weapons so Vikhr for Kamov and ATAKA/Krisantema for Mil... and HERMES for both.

The virtue of ATAKA/Kris is low cost, while still being accurate and relatively fast missiles and not big and heavy.

Having very long range missiles is useful, but it would be like AAMs in many ways... R-77 will never likely be used at 110km range targets.

Spotting military ground targets at long range is not as easy as it seems on video games.

Especially when you add the contours of the land and of course trees and buildings and smoke and rain and the use of camouflage and cover and concealment etc.
medo

The introduction of AESA on the Ka-27M and Ka-52K suggests that there is potential for AESA mast mounted systems for the Mi-28M.

The potential with SARH missiles like Krisantema would be very interesting as several missiles could be launched at once at multiple targets with another missile fired in laserbeam riding mode too.

In many ways it is a bit like the Cobra using TOW and Hellfire except that ATAKA and Kris are not wire draggers so they are much faster and much more potent missiles with much longer range and don't require the launch helo to remain hovering during the engagement.

Hermes offers a step up from Hellfire in terms of range (18-20km to perhaps 25km in later models) and options of terminal guidance including fire and forget models and of course a 30kg warhead is going to have more effect arriving at high speed than a 9kg warhead.

Well the AH-1Z won't be for long relying on outdated TOWs, Northrop Grumman plans and already works on the CRS (Cobra Radar System) for the AH-1Z which would allow it the FCR, but through the size of it i rather doubt it is even near of 8km range detection of armor. 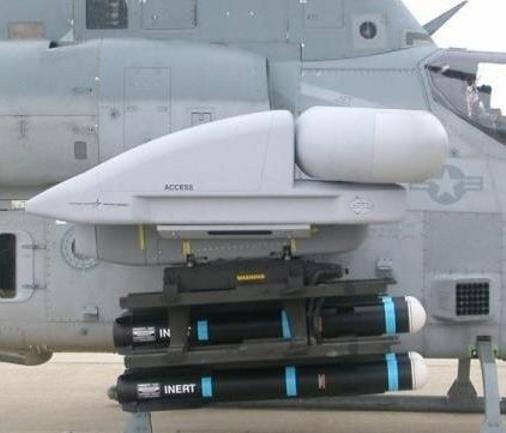 Some post ago, put the armor kg per person carrying the KA50, Mi28 and apache. Would they shield Mi24-35?. Despite how old it is still my favorite helicopter. Thank you all for such a great post.
TR1 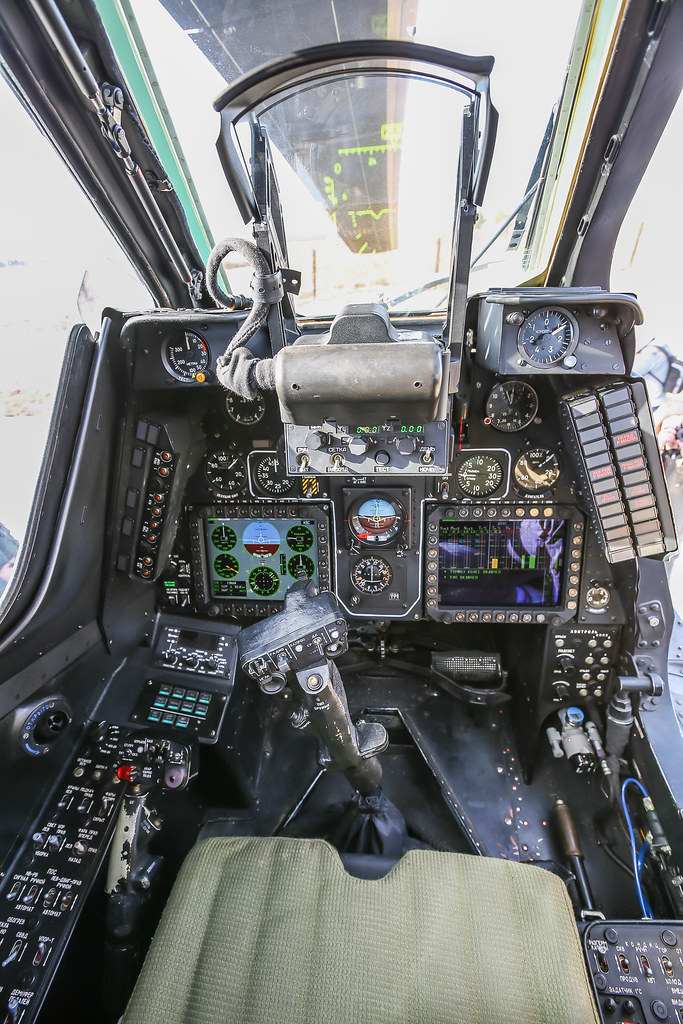 Captured with my shitty phone camera