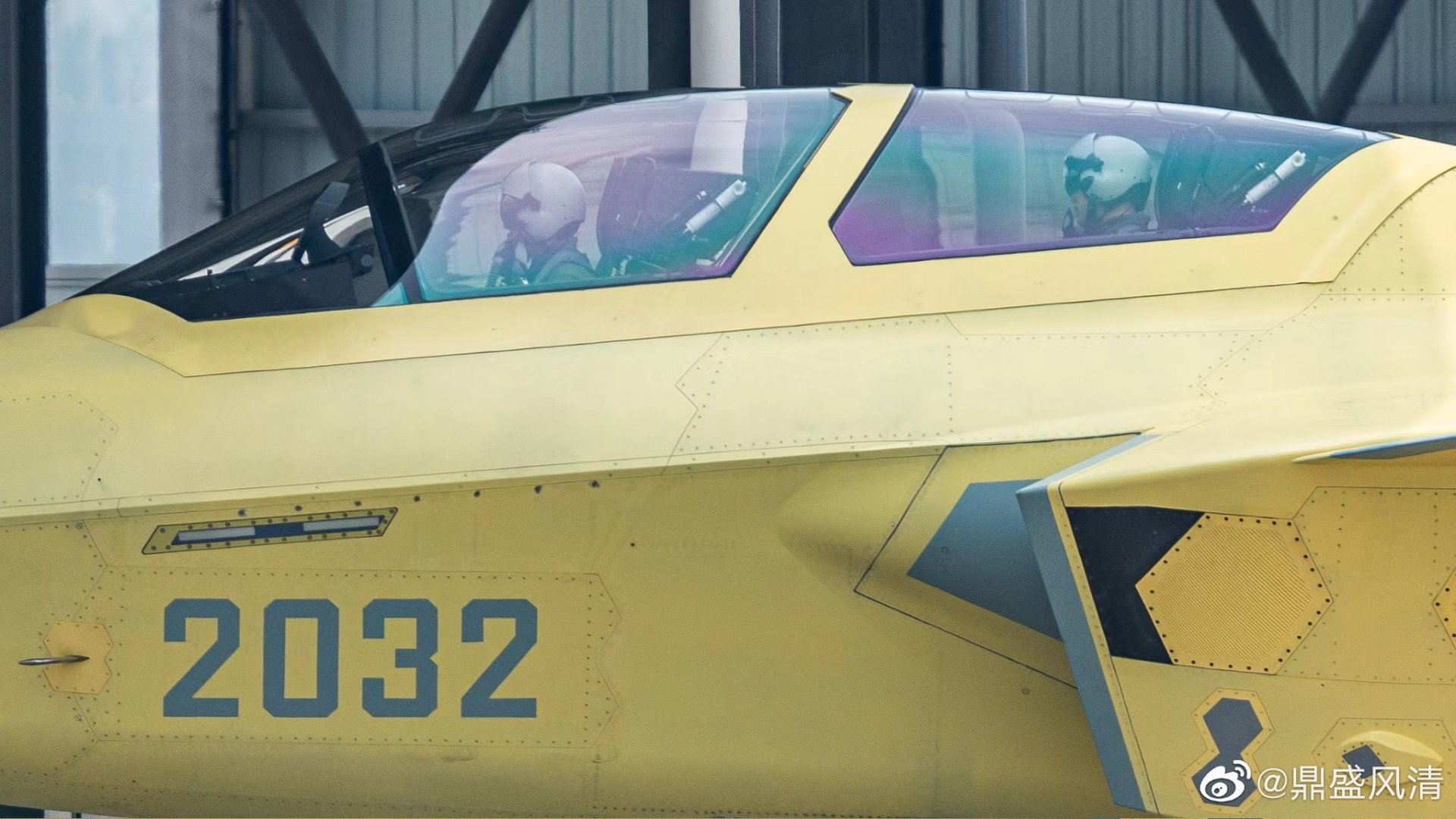 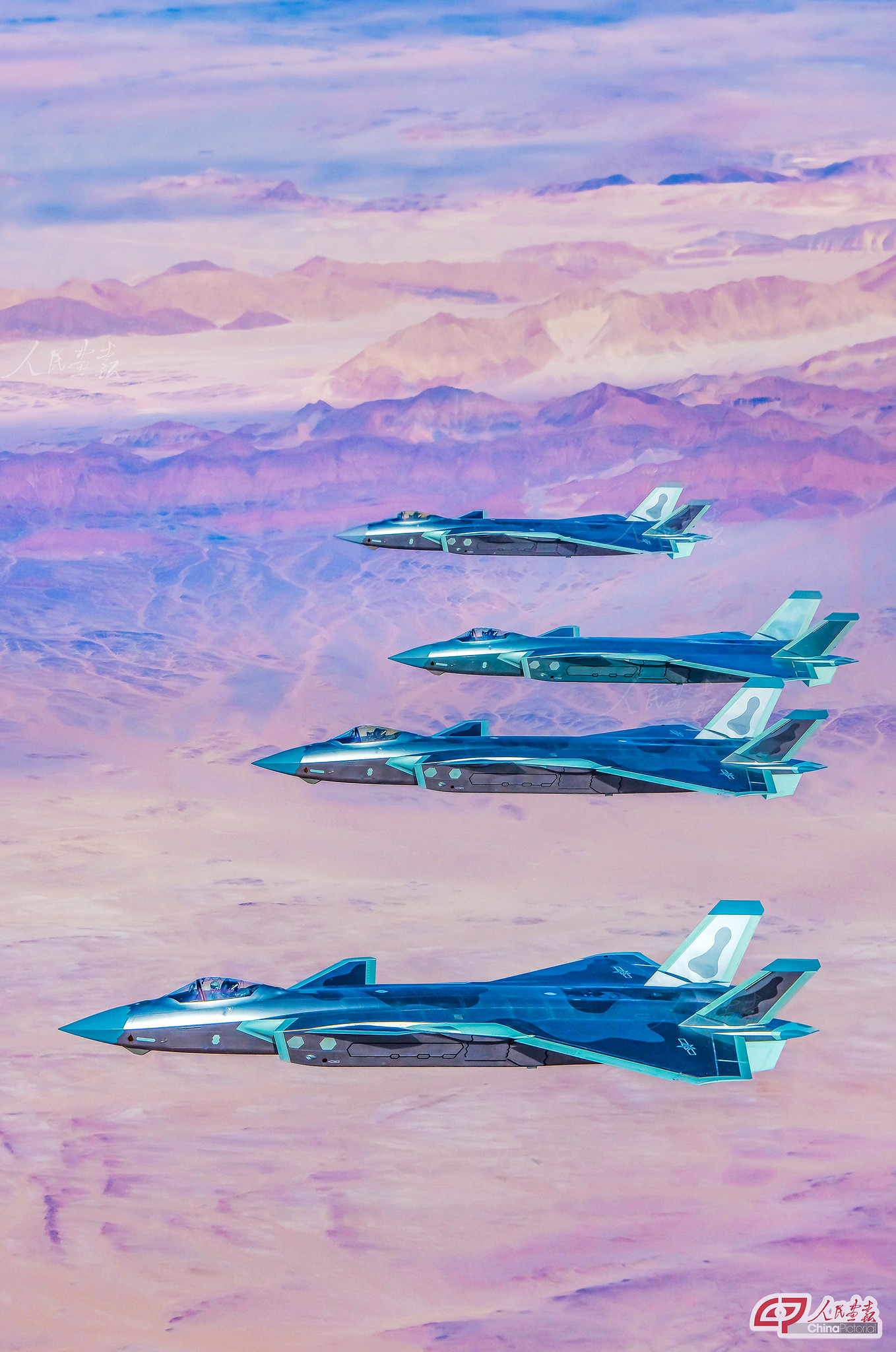 They indeed got some help from Russia developing it: https://www.sandboxx.us/blog/why-russia-accused-chinas-j-20-of-stealing-its-stealth-fighter-design/

China’s J-20 is Now the World’s Only Supercruising Stealth Fighter in Production: Which Others Could Follow ?
My personal observation, which has nothing to do with further text, is that Militarywatch magazine probably views the Su-57 as a low-volume production aircraft.

Since the 1980s as the world’s first fifth generation fighter programs began to materialise in the United States and the Soviet Union, the ability to fly supersonically for sustained periods without using engine afterburners was seen as a defining capability for the new generation of aircraft - a capability known as supercruise. The benefits of sustained supersonic flight were first demonstrated by the Soviet MiG-31 Foxhound interceptor, the fastest aircraft of its generation, which although using afterburners could still fly at speeds approaching Mach 2 far longer than any other tactical aircraft ever had. A pioneer of supercruise capabilities was the F-22 Raptor which joined the U.S. Air Force in 2005, and although reliant on engines with similar thrust to those of the MiG-31 had a much more impressive flight performance due to the much lower weight of the aircraft itself and resulting higher thrust/weight ratio. Wide ranging issues with the F-22 particularly pertaining to its extreme maintenance needs and poor availability rates, resulted orders to terminate production being given less than four years after the fighter entered service, with the aircraft scheduled to begin retirement in 2023 as airframes are placed in storage after completing just a small fraction of their service lives. 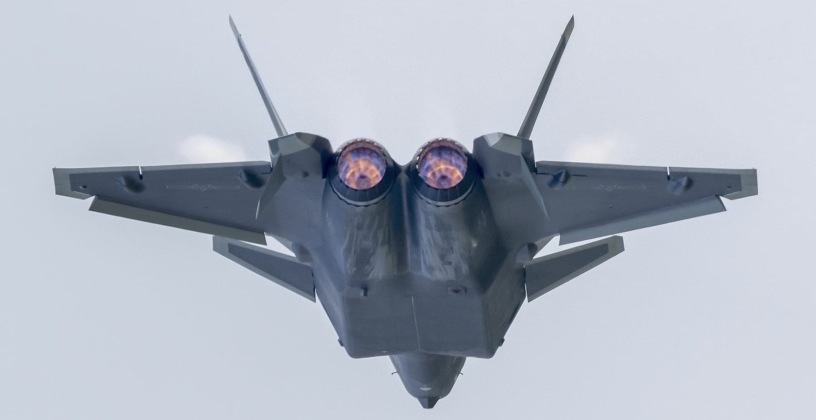 The F-22 program’s early end left an opening for its Chinese counterpart, the J-20 Mighty Dragon, to become the only production stealth fighter in the world capable of supercruise. Although initially relying on stopgap Russian engines, J-20s produced from mid-2019 began to use indigenous WS-10C engines which allowed it to fly supersonically for sustained periods without afterburners. The only other fifth generation fighters produced since the F-22, namely the American F-35 and Russian Su-57, both lack a supercruise capability. The F-35 was designed as a lighter and cheaper counterpart to the F-22, with its use of a single engine and lower thrust/weight ratio making it one of the slowest fighters in the world and meaning it is not even close to a supercruise capability. The Su-57 meanwhile, which has been produced in very small numbers leaving only six operational in the Russian Air Force, has yet to move past its stopgap AL-41 engine and integrate the new Saturn 30 that will allow it to supercruise. 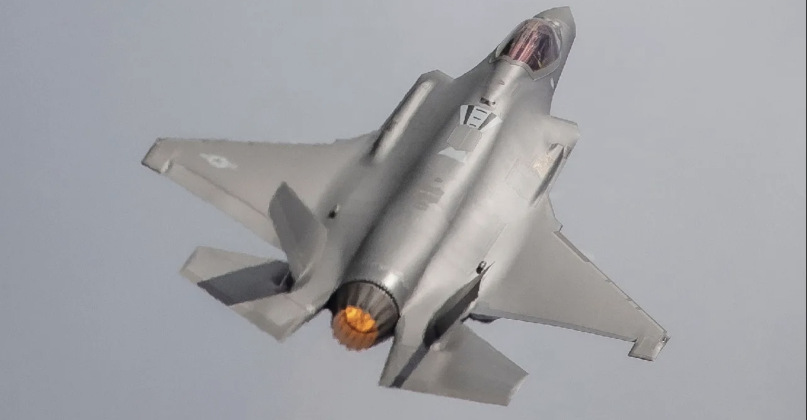 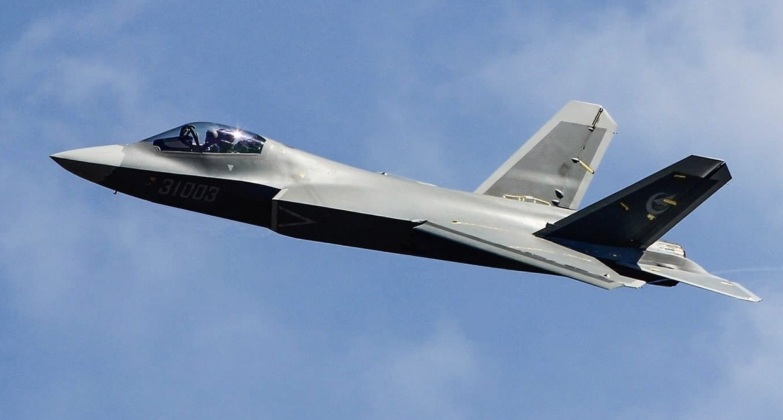 The Su-57, meanwhile, will according to some reports be able to supercruise at Mach 2 when the Saturn 30 becomes operational around 2025. South Korea’s own fifth generation fighter, the KF-21 is not expected to be supercruise capable due to its reliance on American F414 engines, which even among fourth generation designs are modest in how much thrust they can put out for the medium weight aircraft. Chinese and American sixth generation fighters which are expected to enter service around 2030 are also expected to be supercruise capable. The J-20 may thus retain its unique position as the only supercruising stealth fighter in production until around 2025, when the Su-57’s new engine becomes operational and the FC-31 enters service. This capability will become more widespread around 2030 as the Checkmate and various sixth generation fighters enter service.

I can't transfer this to the Y-20 section, I don't know why it says it's locked, so let George transfer it when he has time...

Six years after the first public appearance of J-20 fighter jets from the Chinese People’s Liberation Army (PLA) Air Force, when a pair conducted a brief flypast at the opening ceremony of the 2016 Zhuhai Air Show, the aircraft’s presence at Zhuhai 2022 has given further insight into the secretive but very high profile weapons program. Since the first J-20s were delivered to the PLA in mid 2016, speculation has continued to grow regarding how large the fleet is with estimates varying increasingly widely. Estimates by U.S. analysts in April 2022 placed the fleet size at around 200, while more conservative assessments from elsewhere in the Western world indicated that only around 140 were in service shortly before the opening of Zhuhai 2022. Prior U.S assessments in late 2021 estimated a fleet size of over 150 fighters.
At Zhuhai 2022 J-20s with construction numbers CB0370 and CB0369 were seen publicly for the first time, indicating that the second batch of J-20 fighters includes at least 70 aircraft - many more than previously thought. With aircraft from the fourth batch having already been seen earlier in the year, this has raised the bottom figures for the most conservative estimates of J-20 numbers much closer to the 200 figure, with the possibility of under 180 of the fighters being operational today being unlikely. 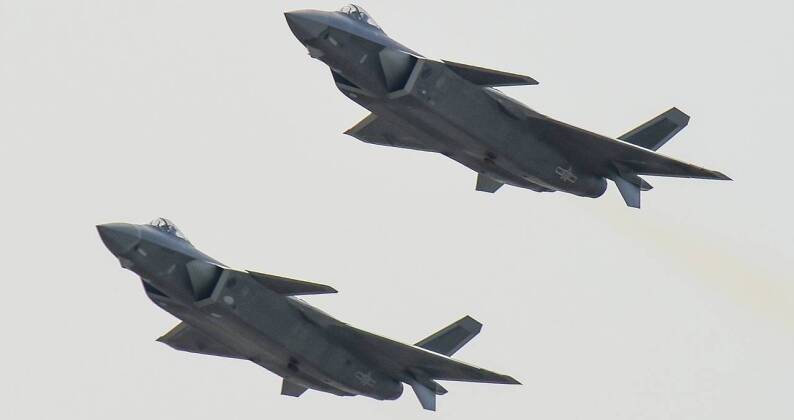 Significant investments have been made in expanding J-20 production, and despite the announcement in December 2021 of full scale mass production being achieved further very significant growth in manufacturing facilities is expected. Satellite images of expanding associated factories at Chengdu provide one notable indicator of this. The J-20 is one of just two fighters in the world of its generation both in production and fielded at squadron level strength, alongside the American F-35, with the two having first encountered one another relatively recently over the East China Sea as confirmed in March 2022. Although China spends more on defence acquisitions than the United States, the F-35 fleet is expected to continue to significantly outnumber the J-20 fleet for a number fo reasons - primarily because it is a much lighter single engine aircraft with lower operational costs while the J-20 is a twin engine heavyweight optimised for high end air superiority missions. The F-35, like its predecessor the F-16, was designed to be relatively inexpensive and be produced on a massive scale, while the J-20 in terms of role and configuration is more similar to America's higher end F-15 and F-22. Some of the most significant advantages for the heavier classes such as the J-20 include much greater manoeuvrability, weapons payloads and speeds, larger radars, and higher altitude ceilings. 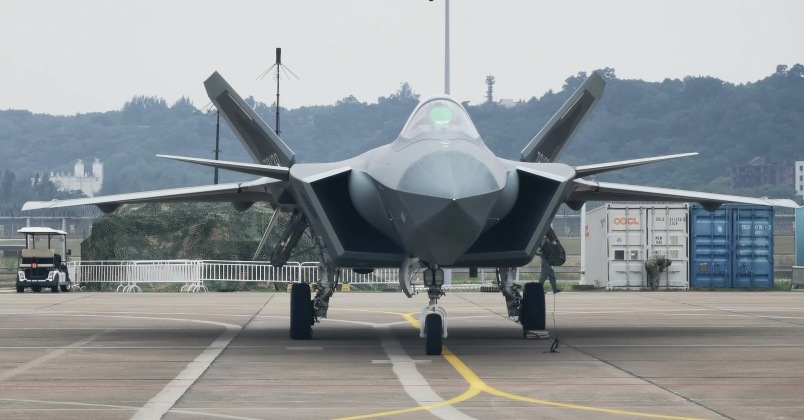 A J-20 fleet eventually reaching over 700 aircraft remains highly plausible, particularly following the lates revelations regarding the scale of production of China’s most advanced pre fifth generation heavyweight fighter the J-16 of which around 300 have entered service since 2014-2015. The J-20 is estimated to be in production at a rate of well over 30 pear year, which if further expanded as more new variants are developed could provide a means to quickly bring more brigades to a fifth generation level. Three J-20 variants have been confirmed including the standard J-20, the J-20A with an improved engine and revised stealthier airframe design, and a twin seat variant of the latter the J-20AS. China and the United States are also competing neck to neck to field the world’s first sixth generation fighter, the first of which are expected to enter service around 2030. New unmanned stealth aircraft seen at Zhuhai 2022 are expected to serve as supporting 'wingmen' to both the J-20 and its upcoming sixth generation successor.

Not only is Chengdu Aerospace Corporation vastly expanding their production facilities for the J-20, they also moved the J-10 production line out of Chengdu into Guizhou, so those facilities and staff will also get switched over to J-20 production. They will likely build enough of these aircraft to totally replace the Su-27 derived aircraft, including the J-11, so some 500-600 aircraft.
walle83

Some new really nice high res pictures of the J-20. 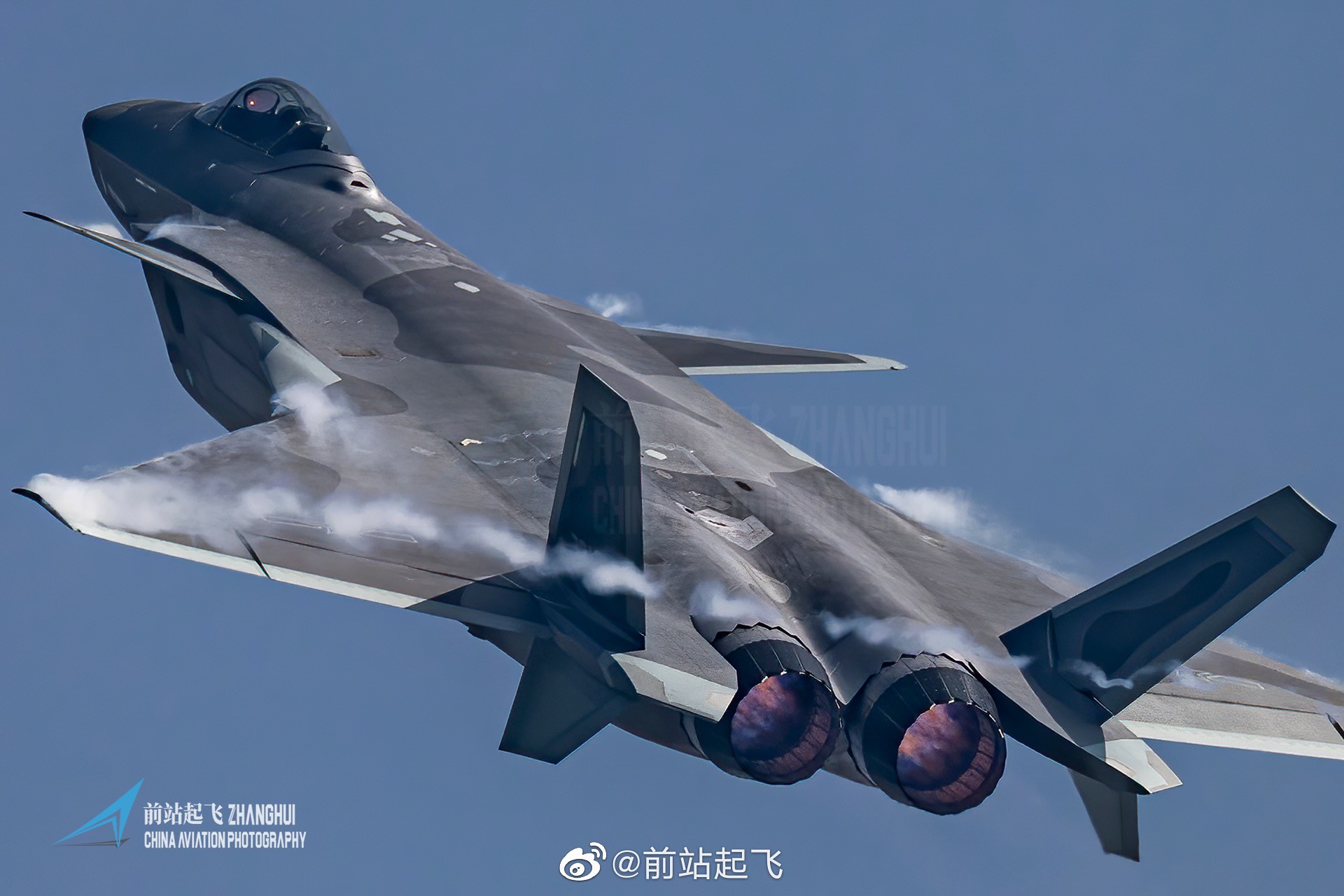 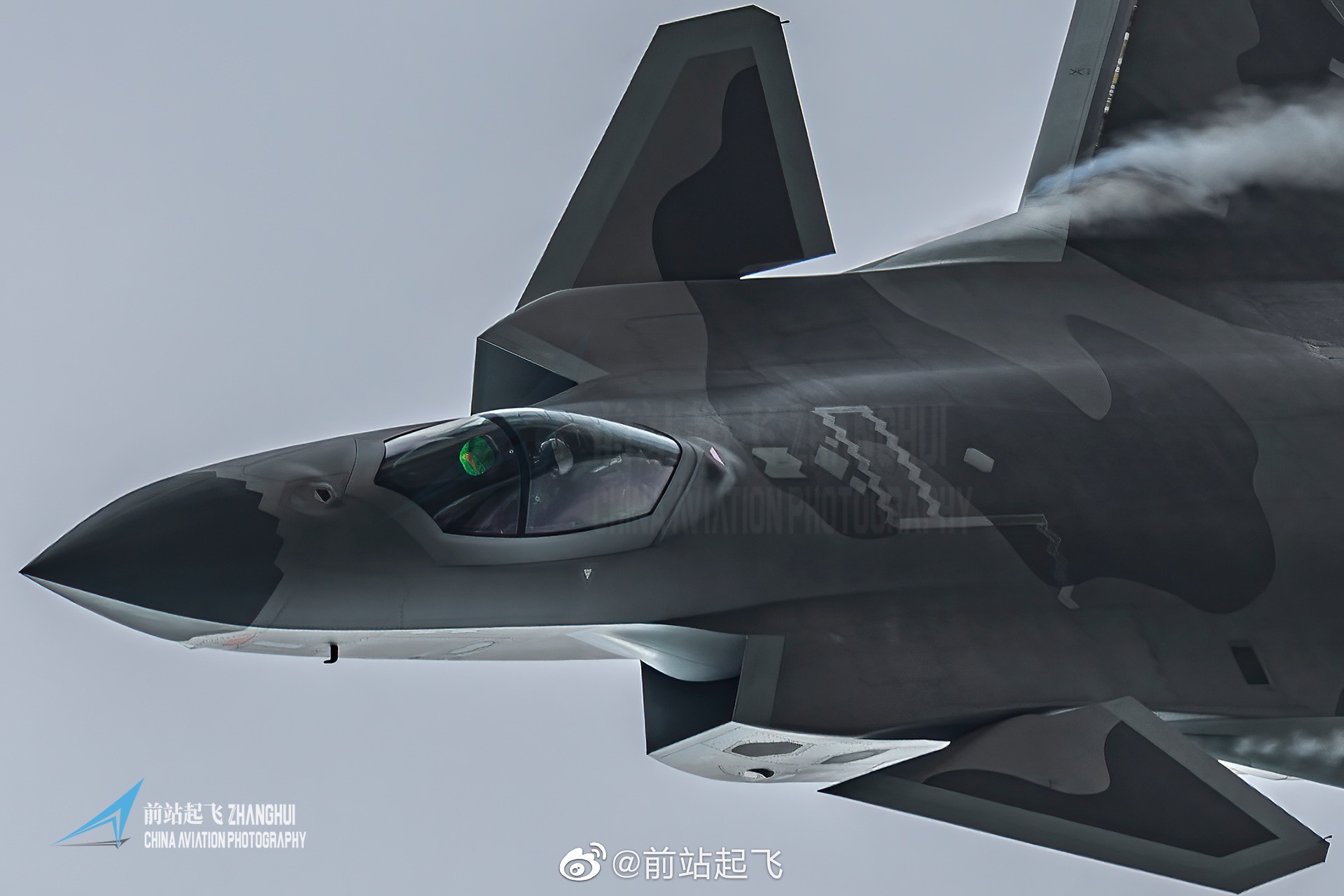 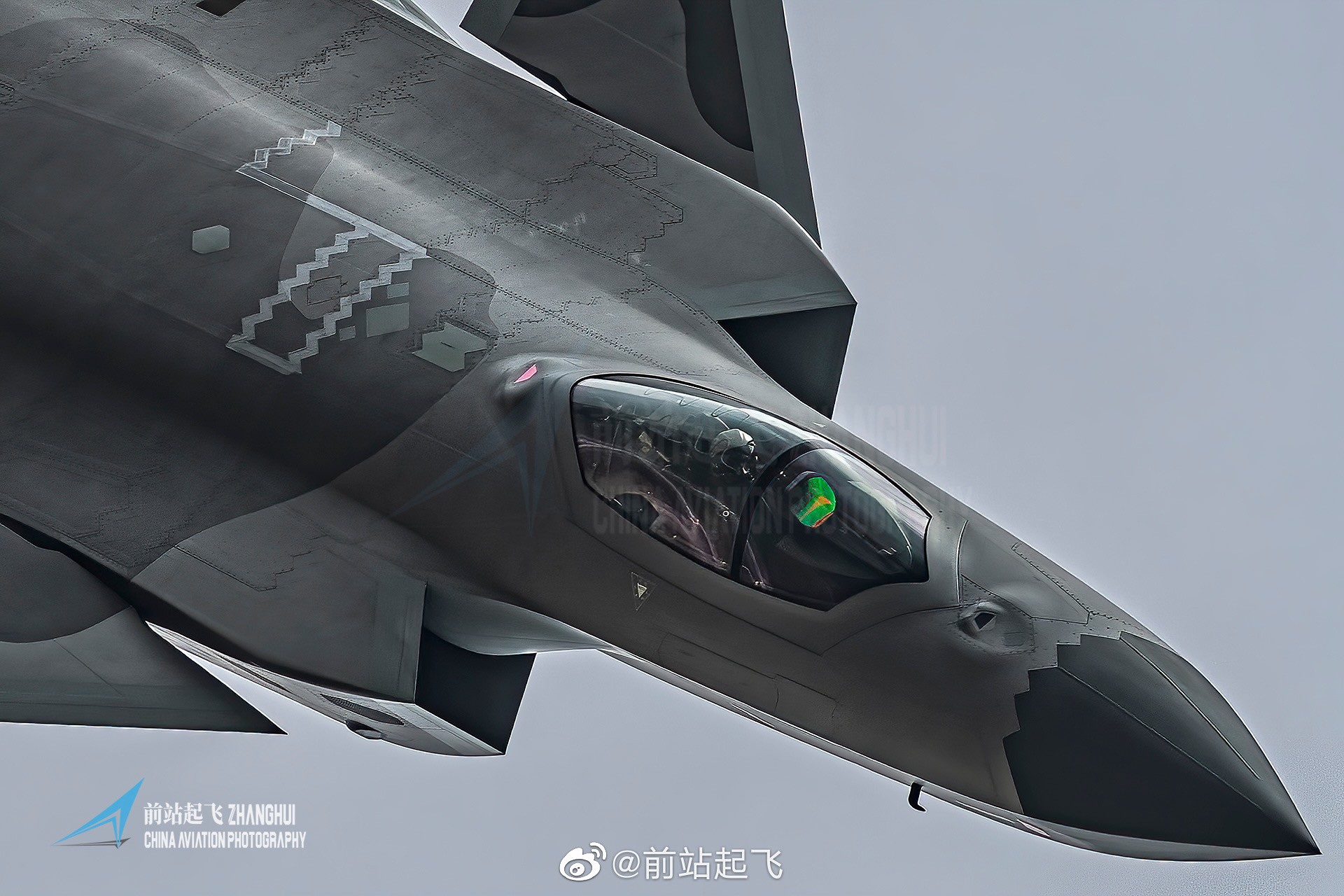 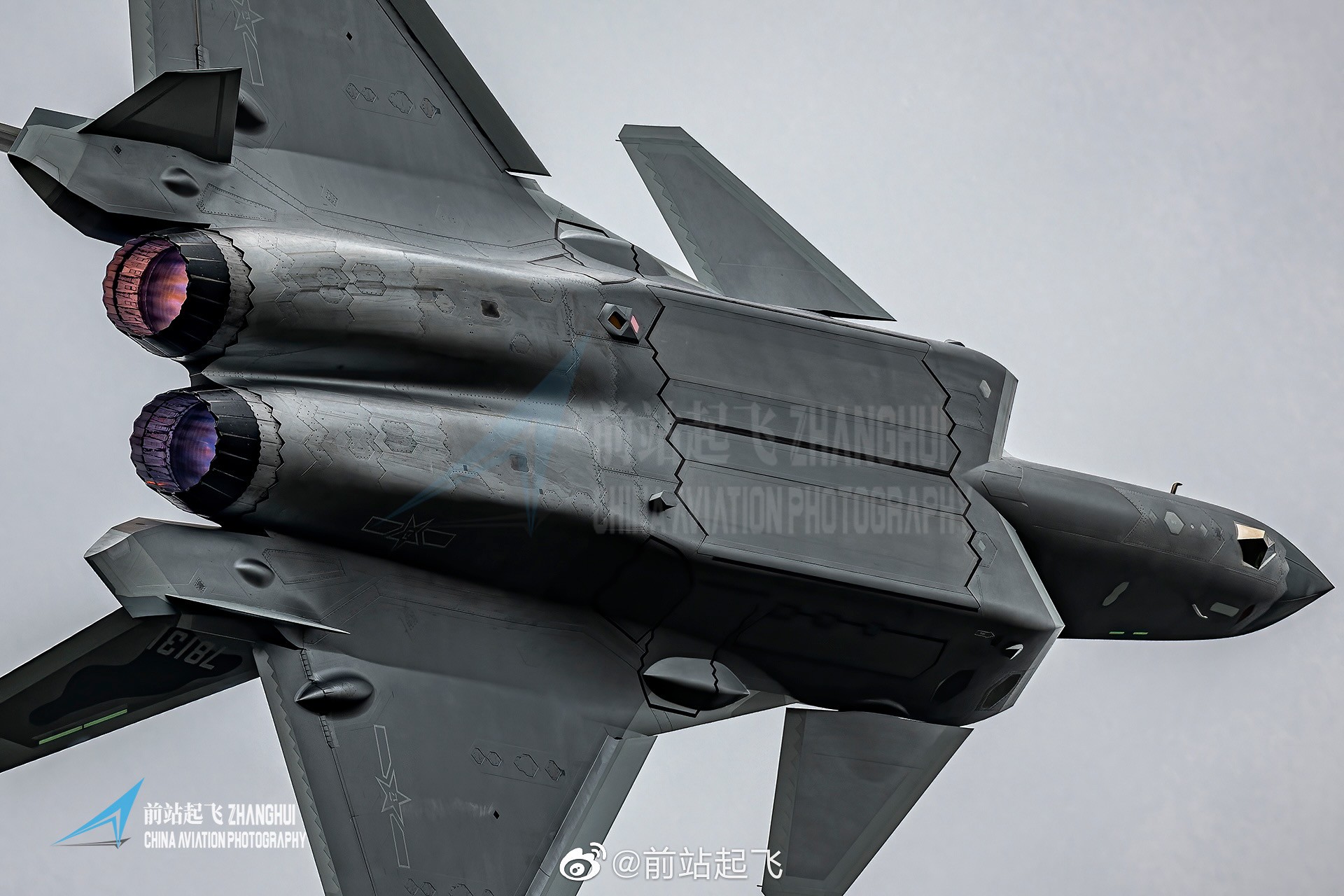 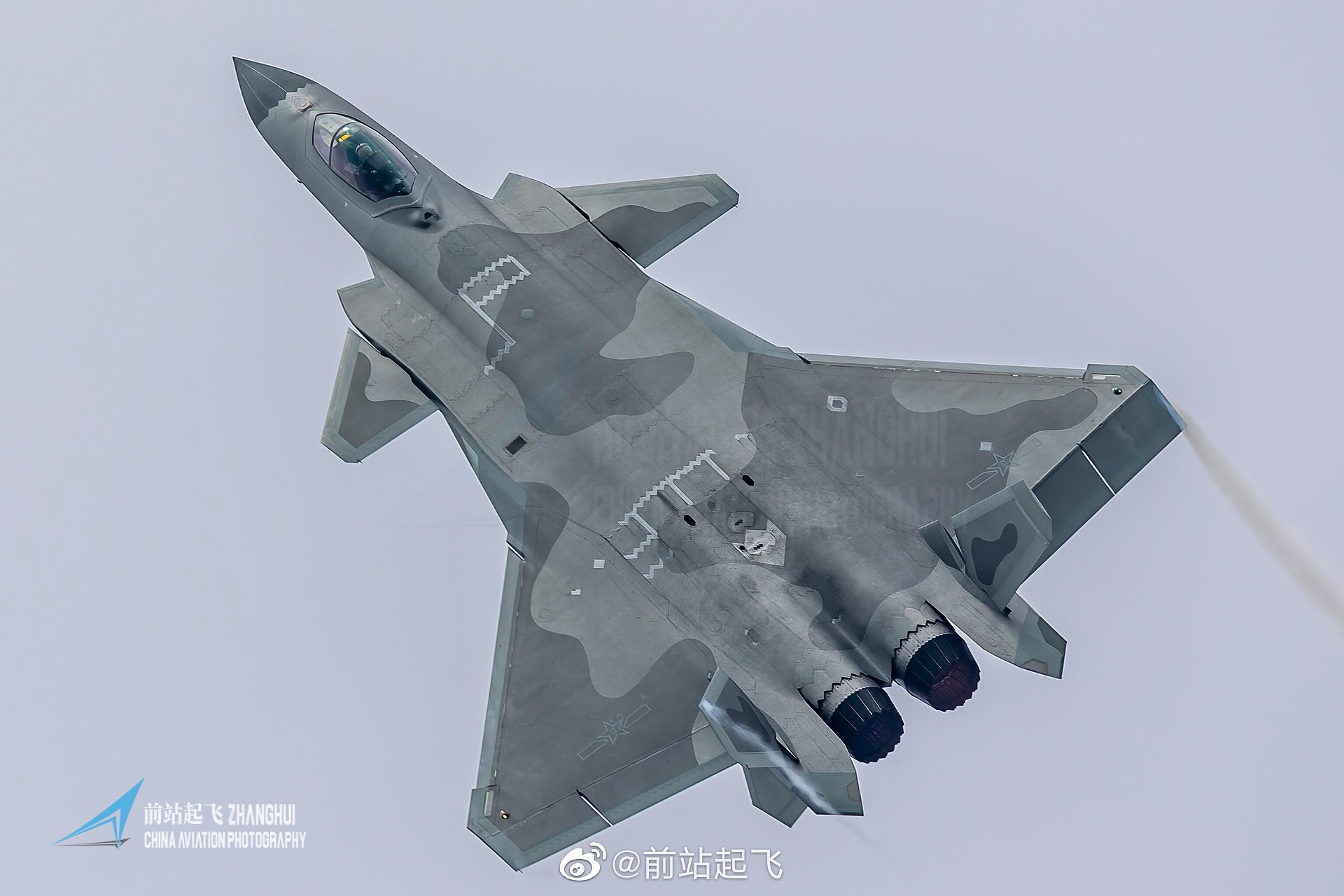 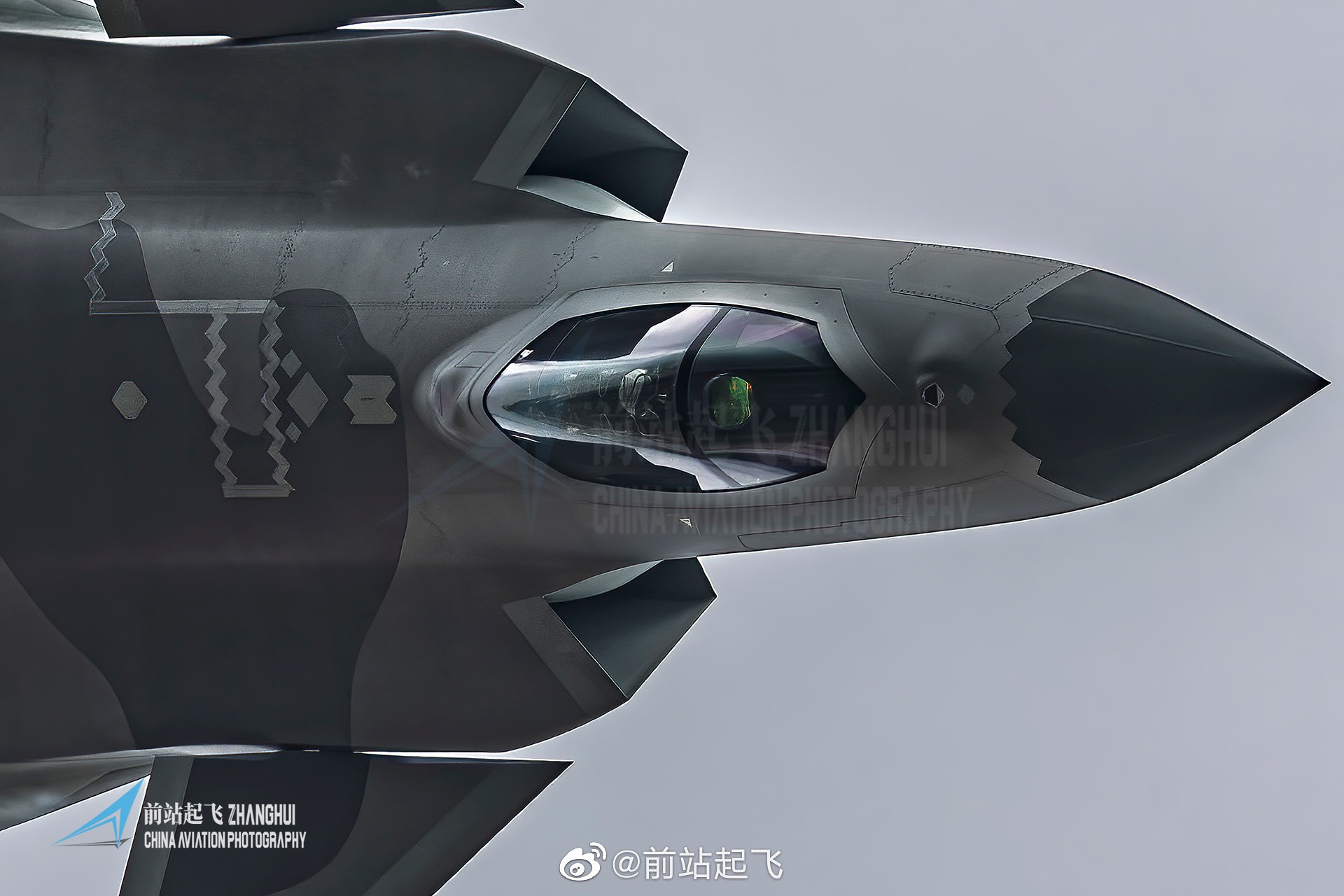 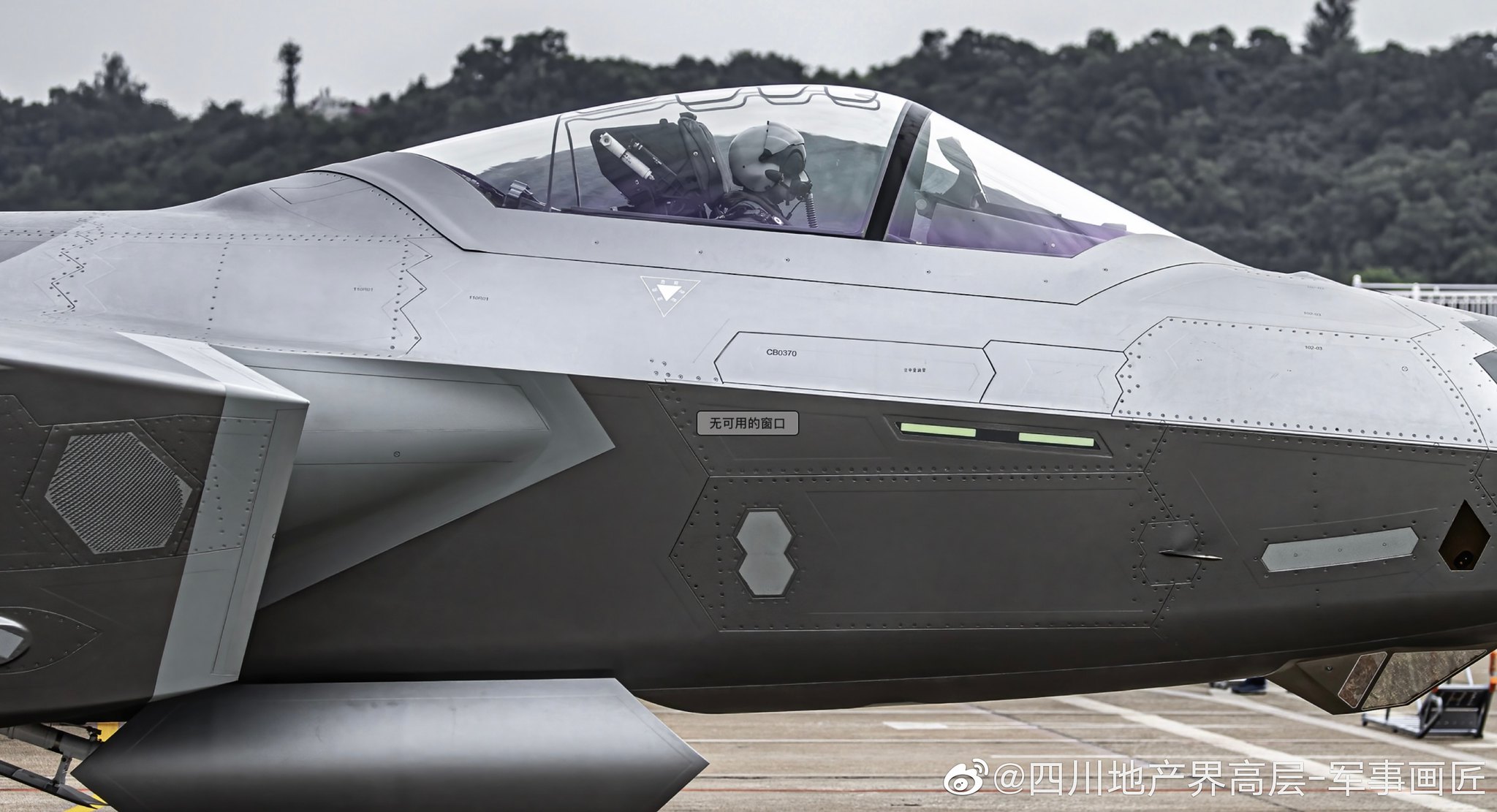 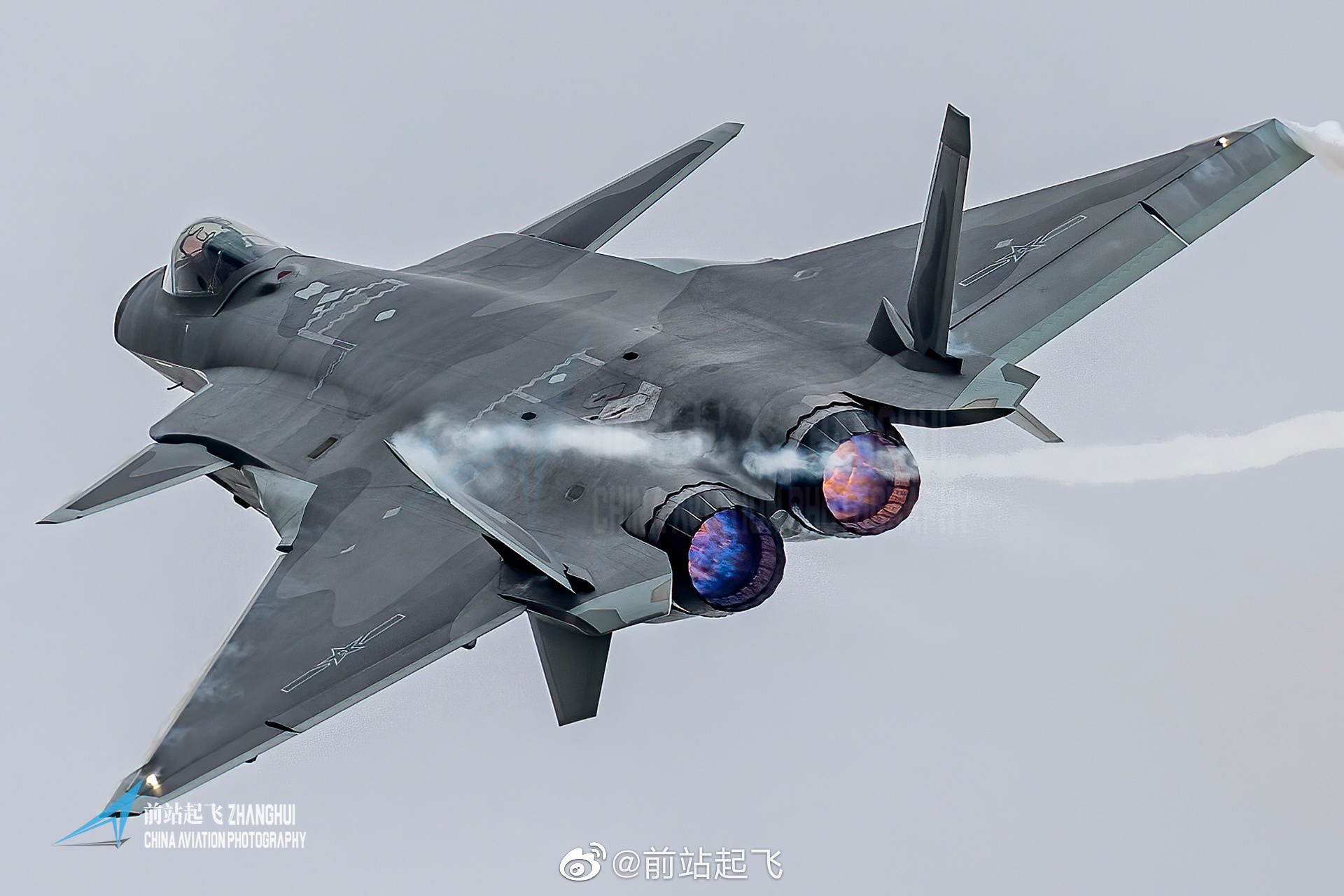 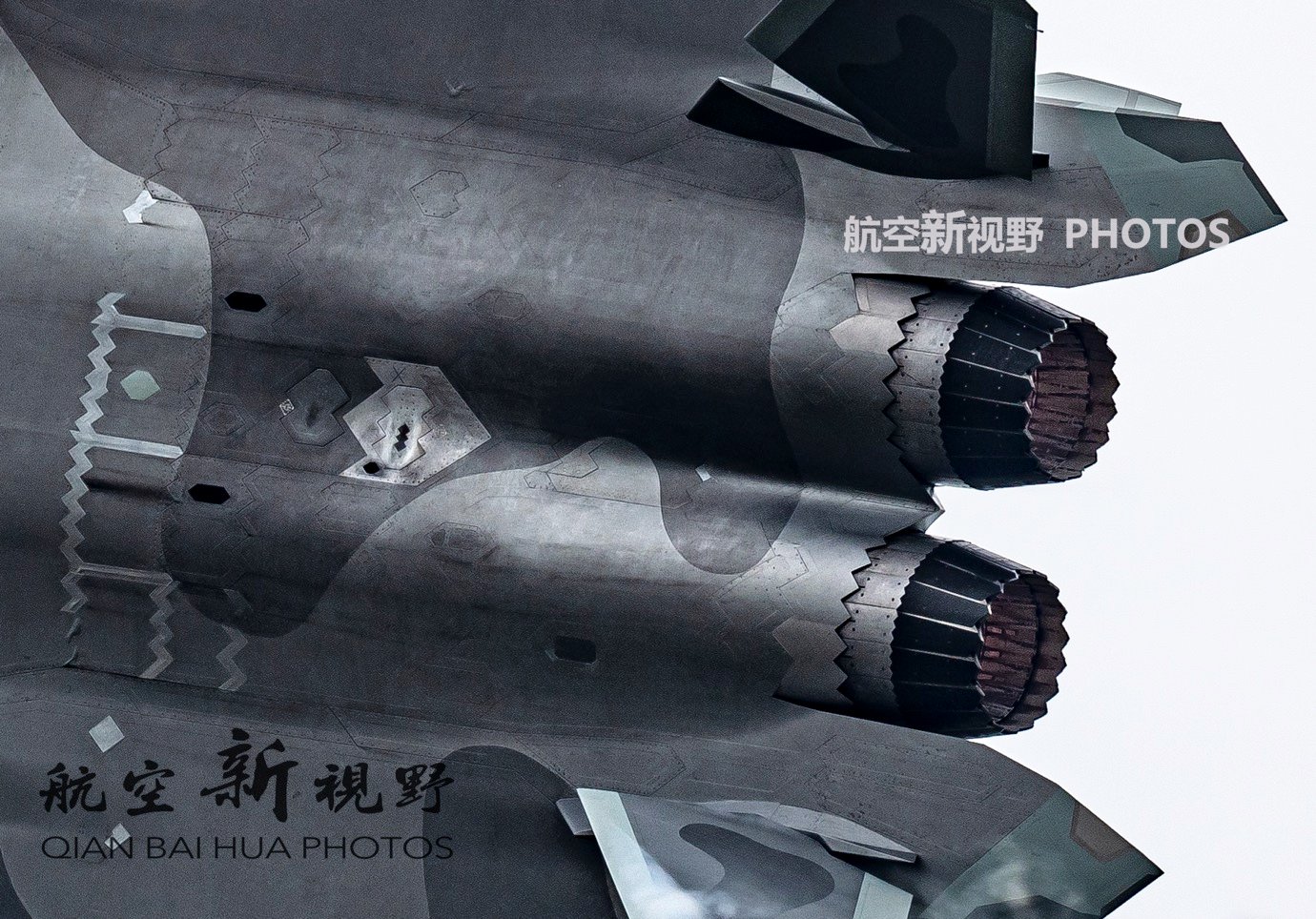 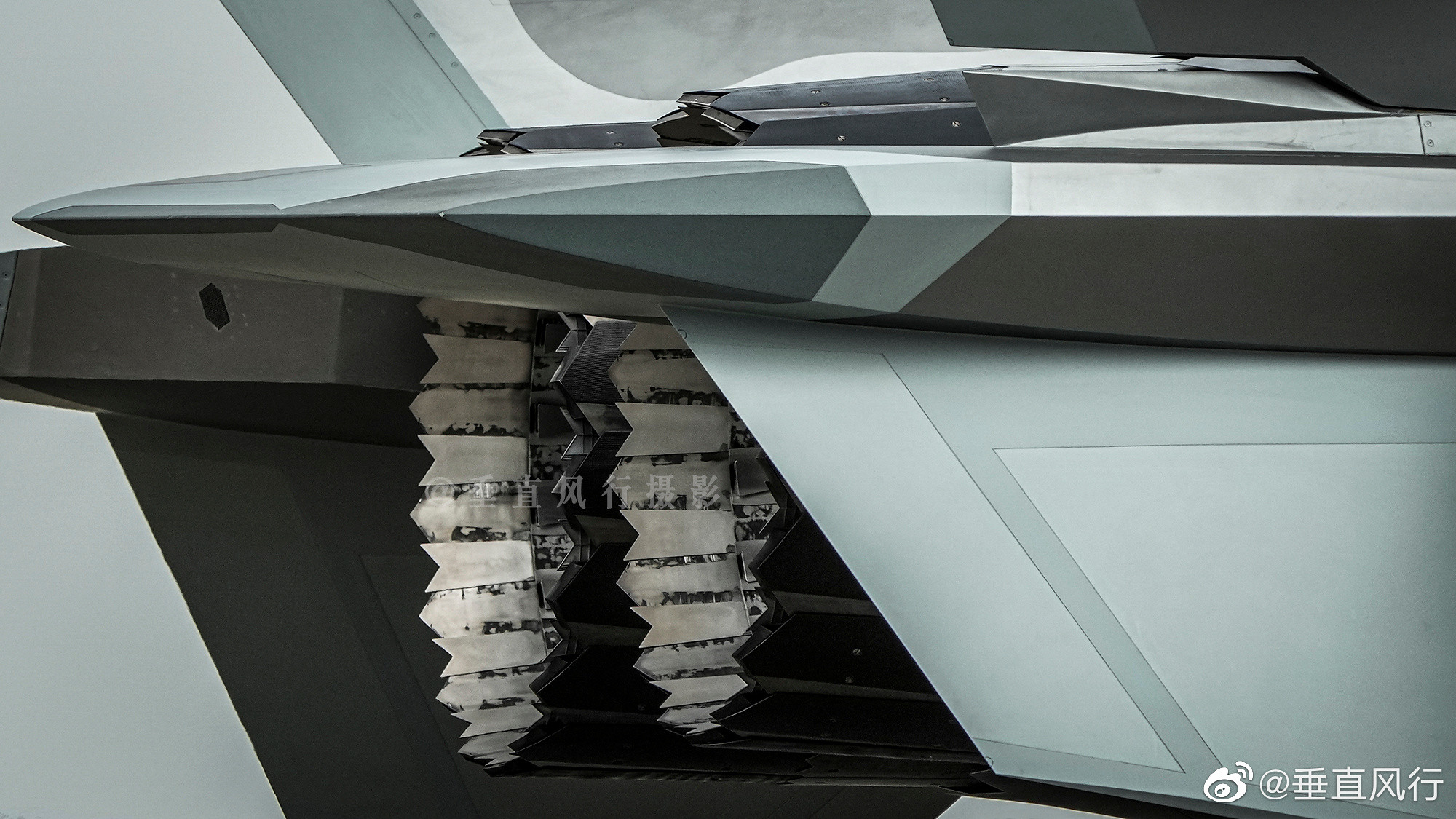 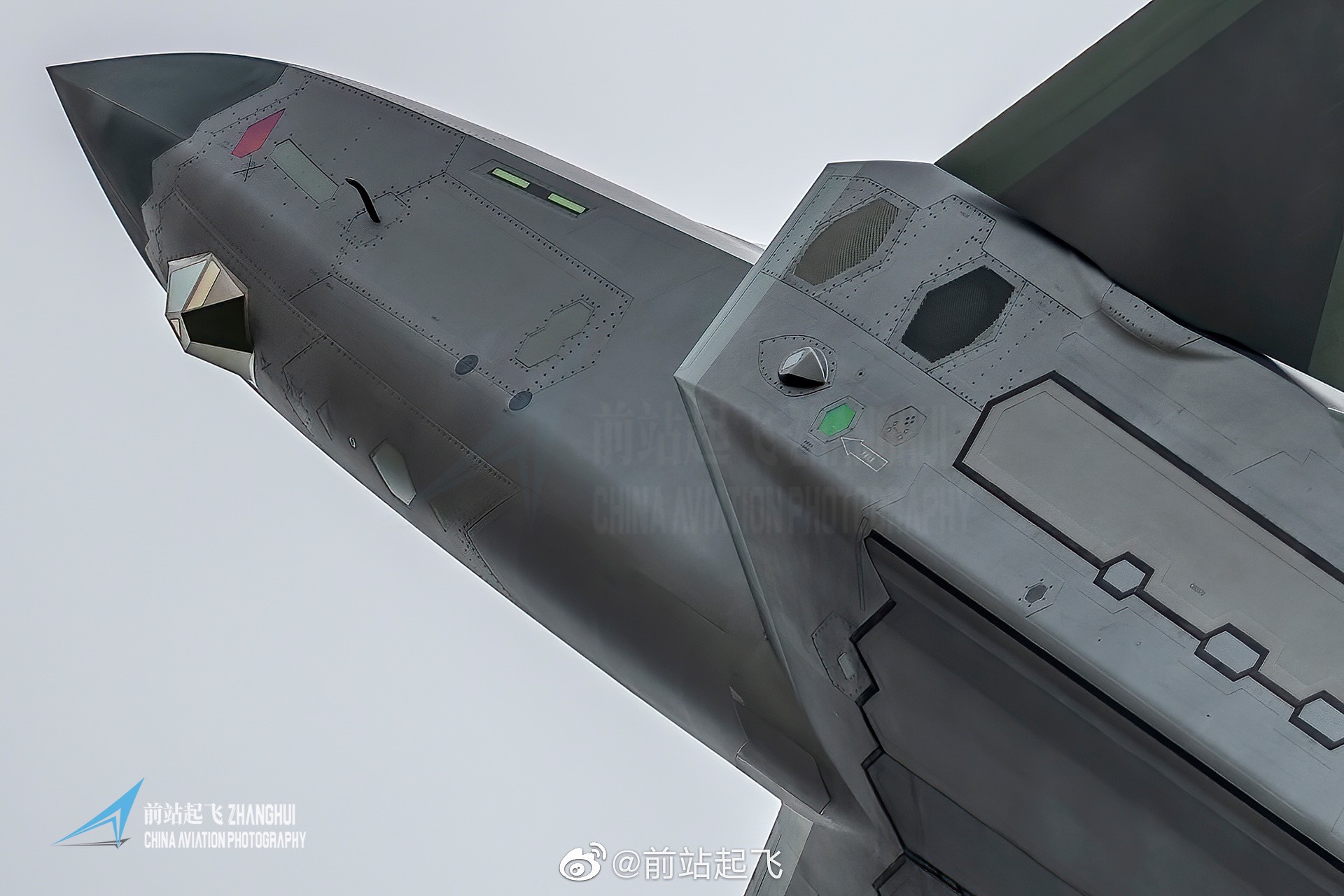 And they dare to say su-57 has too many rivets

And those pitot tube on the front

Not a surprise indians tracked it easily with su-30.

Yes here the US seems better then both. 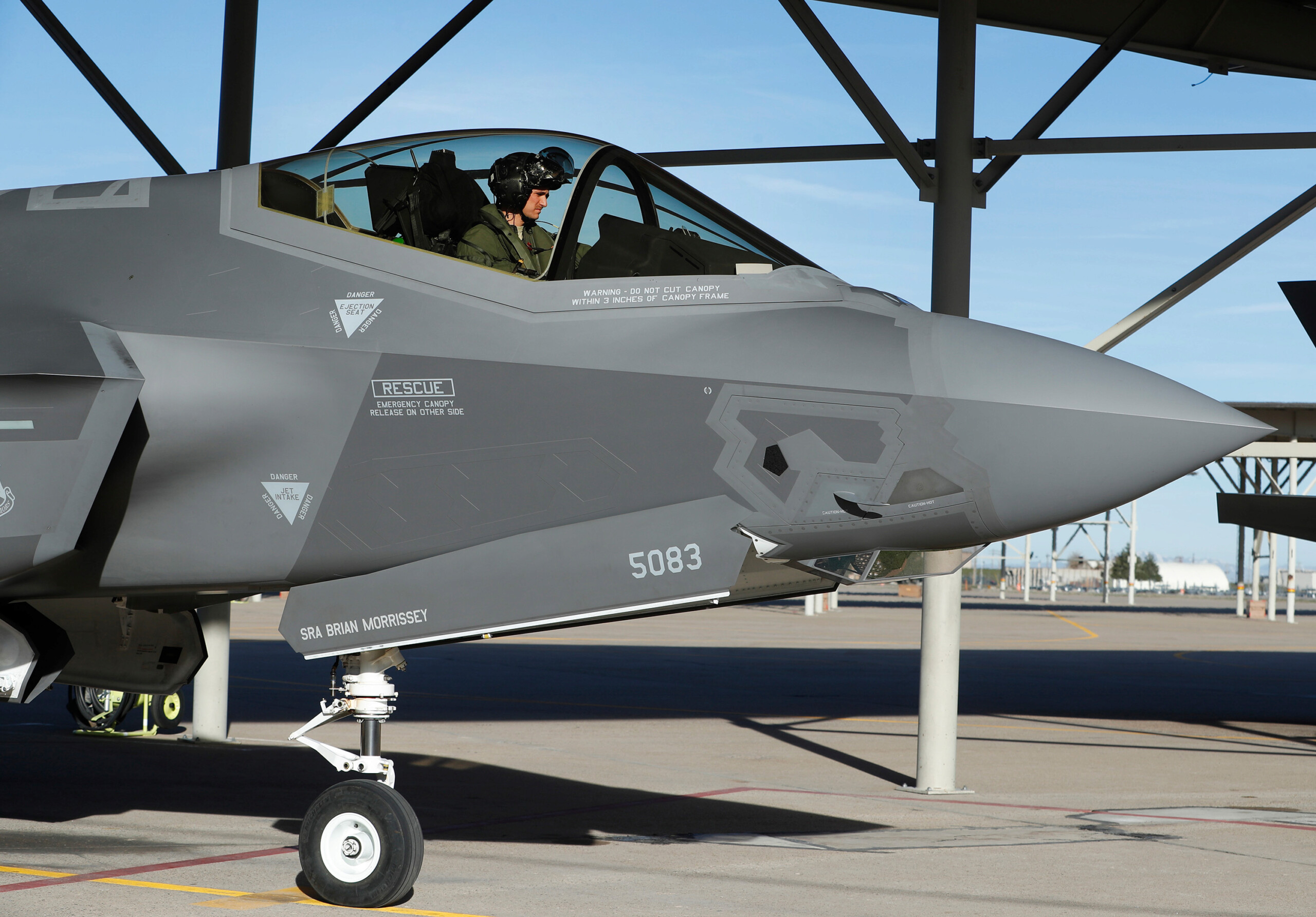 The F-35 is just covered with tape on the gaps. The machine tolerances look similar to me.
GarryB

A large portion of the 40 hours of maintenance for every flight hour involves the removable panels which have tape over them and RAM coatings.

To access an interior avionics bay you have to grind off the RAM and the tape to find the panel... unscrew the screws and remove the panel and check or fix or replace what needs attention and then replace the panel and tape up the joins and the screw heads and then coat it in RAM material which then needs several hours to cure at a very specific temperature and humidity before the aircraft can fly again...

Isos is absolute idiot - nowhere proven higher value complex will eat that man.
When a French idiot starts his wisecracks, there's nothing worse than that. And his stupidity from the Rafale, through the Su-30/34/35 and all the way to the J-20 does not stop.
There is no need for me to write that China is the country that produces more fighter jets in one year than crappy France has in total.
Glorifying the Rafale or the fourth generation eastern/western jets over the J-20 is like glorifying the Roman catapult over the howitzer.
Writing about the J-20 and Su-30MKI has no value and is not proven anywhere, but the first-class French retard continues to present his "evidence" about how much he has been hit in the head by Western propaganda. Yes, we ALL see VERY well what China produces and what the Indian military industrial complex produces 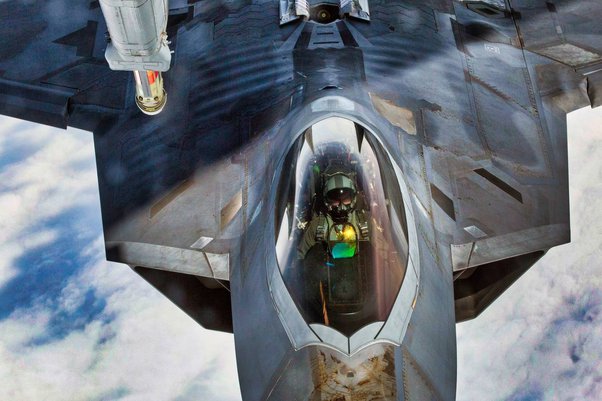 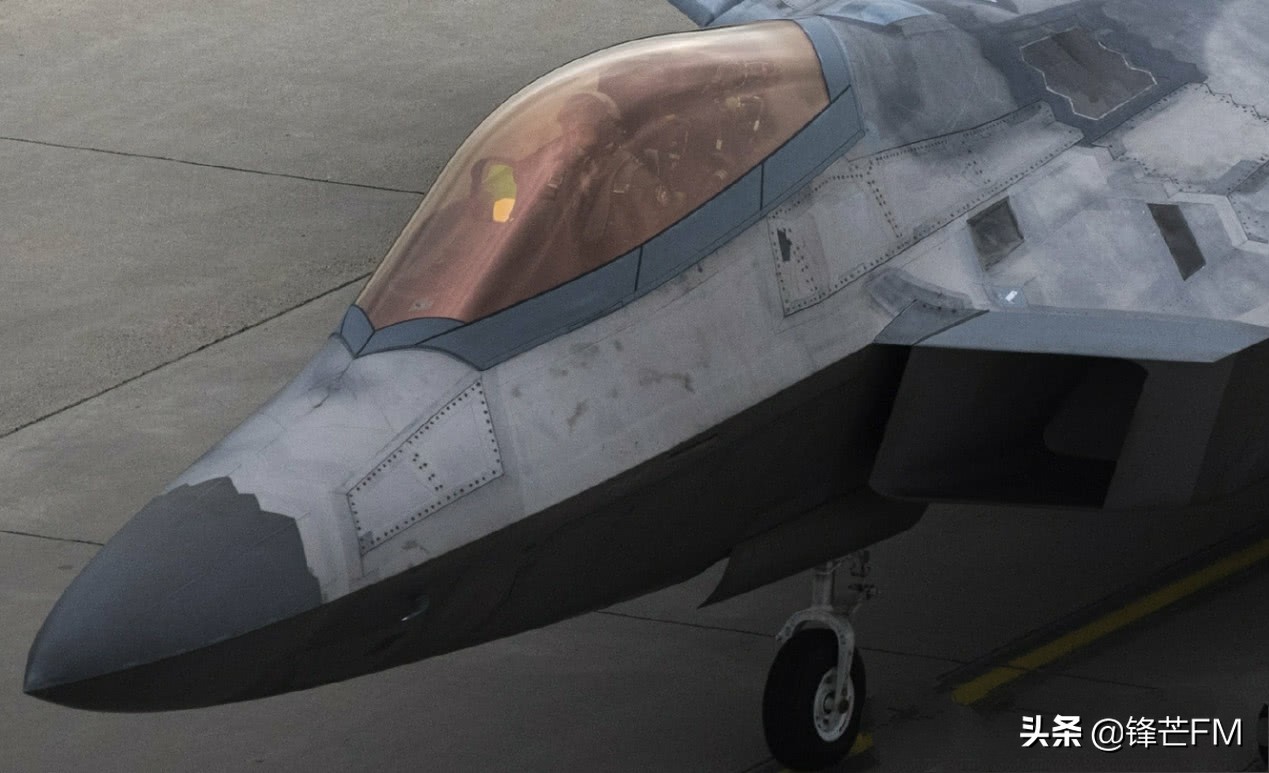 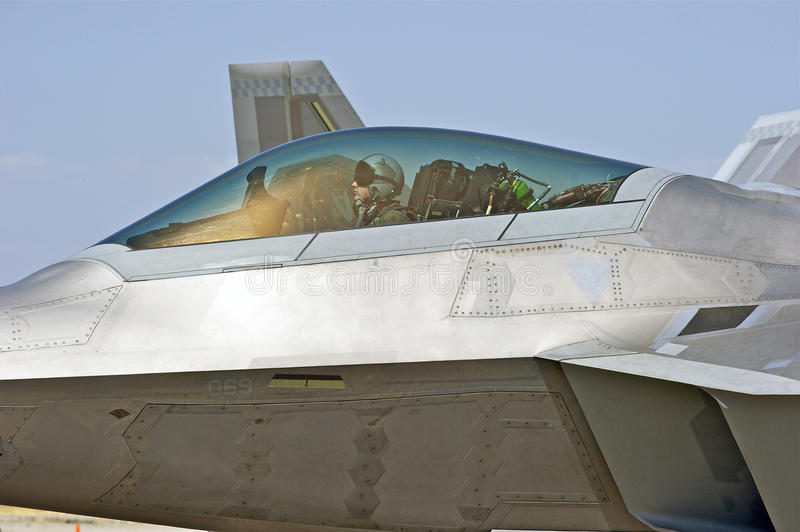 People who don't understand the position of China now are relics.
Unable to observe and deduct the surrounding.
There is no need to be rude to them, it is a medical issue, you know

Remember that! My first PC used them, back in 1995

That must be a superb platform for playing Wolfenstein in medium res!

Gee, I feel deeply touched inside, those three decades passed just like an eyeblink

Produced by western civilization 20 years ago. China still doesn't have something as good. Specially for the engine which is a beast.

US invented the engine from scratch.

That's the difference. US invent stuff, China copies them. You can guess who's the leader.
lancelot

The US had crap piston engines and jet engines in WW2. Only decent engines they had were radials. They had to license produce the Merlin engine. And they got the British patents on jet engines for free. With the British Empire basically bankrupt, and all their patents for free, then they improved quickly.

You probably have not realized it yet, but China is right now producing hundreds of jet engines every single year for the J-16 and J-20. In an amount that dwarfs F-35 engine production. They made huge assembly line facilities with continuous production for these. Eventually they will get there. As is, their engines have right now roughly the same performance as the Su-35 or Super Hornet engine.

They produce hundreds of soviet designed engines that they copied.

And they have nothung that comes close to su-35 engines. That's why they bought the su-35, to steal and copy its engine technology.

Producing plenty of them isn't gonna make them get new and better technology and vecome a leader. You need your design bureau to be self sufficient. Now they copy export versions if soviet and russian engines. They are still far behind the US or Russians.
Tolstoy