"Ahead of schedule and in full": Kalashnikov fulfilled the 2021 state defense order for the supply of Vikhr missiles

The timing of the start of serial deliveries of the S-8OFP "Armored Boy" aircraft missiles to the troops has been announced
Today, 07: 35
23
The newest aviation The S-8OFP Armored-Gunner missile will begin to be serially supplied to the troops no earlier than 2023. This was told by the executive director of "Tekhmash" Alexander Kochkin.

According to him, which leads RIA News, The Ministry of Defense has not yet accepted the missile for service, the documents for it are being approved. Until these documents are signed, the military cannot purchase ammunition, despite their desire. Taking into account all the bureaucratic delays and manufacturing technology, there is no need to wait for serial missiles before 2023.

Unguided missile "Armor-piercer" completed state tests in 2018, in 2019 a batch of missiles was launched for experimental military operation. It was supposed to be put into service this year, 2021. At least that was the plan and it was talked about in "Techmash". The reasons for this shift are unknown to us, perhaps there are objective reasons for the long adoption of the missile into service.

As previously reported, the S-8OFP "Armored Boy" missile should complement the S-8 unguided missile family for use from aircraft and helicopters (Su-24/25, Mi-8 and others). It is designed to destroy light armored vehicles and surface ships at a distance of up to 6 km. Its peculiarity is that, depending on the task, it can explode when it hits an obstacle, in front of it or behind an obstacle. The caliber of the S-8OFP rocket is 80 mm, i.e. the same as its predecessors, but the charge power is much higher.

So what are the principles being used to increase the warhead's power?
Is it the Chemical composition or pure weight increase?
GarryB

I would expect a more powerful rocket motor allows a heavier warhead as well as smart fusing so the warhead is more efficiently used on target.


Depending on the settings of the fuse, the "armor-breaker" is able to break through obstacles facing given targets, and it can also explode in front of and behind obstacles, while not collapsing and continuing to fly. "The engine of the S-8OFP is smaller than that of the S-8, the weight of the warhead is increased by 1.5 times. As a result, the efficiency increased 5-10 times," said Nikolay Makarovets, General Director of Splav, in November 2014.

So essentially more powerful rocket fuel has allowed them to make a heavier warhead and its armour piercing design and smart fusing means the rocket can be used as a HE frag rocket for area targets in the open with a contact fuse, it can also have a delayed impact fuse for exploding inside a barrier like a wall or bunker, or it can be designed to penetrate a bunker and explode when it hits something inside the bunker.

It therefore replaces three older rocket types with one rocket and at 6km range it has 1/3rd better range than most previous rocket types of that calibre.

It can use optical guidance as an option too. 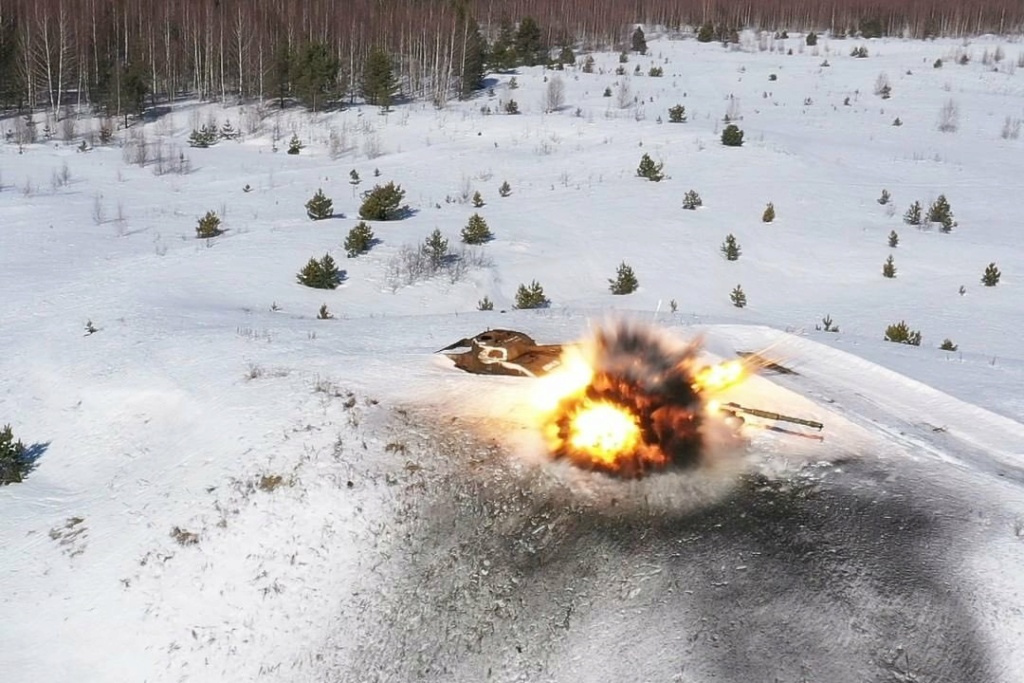 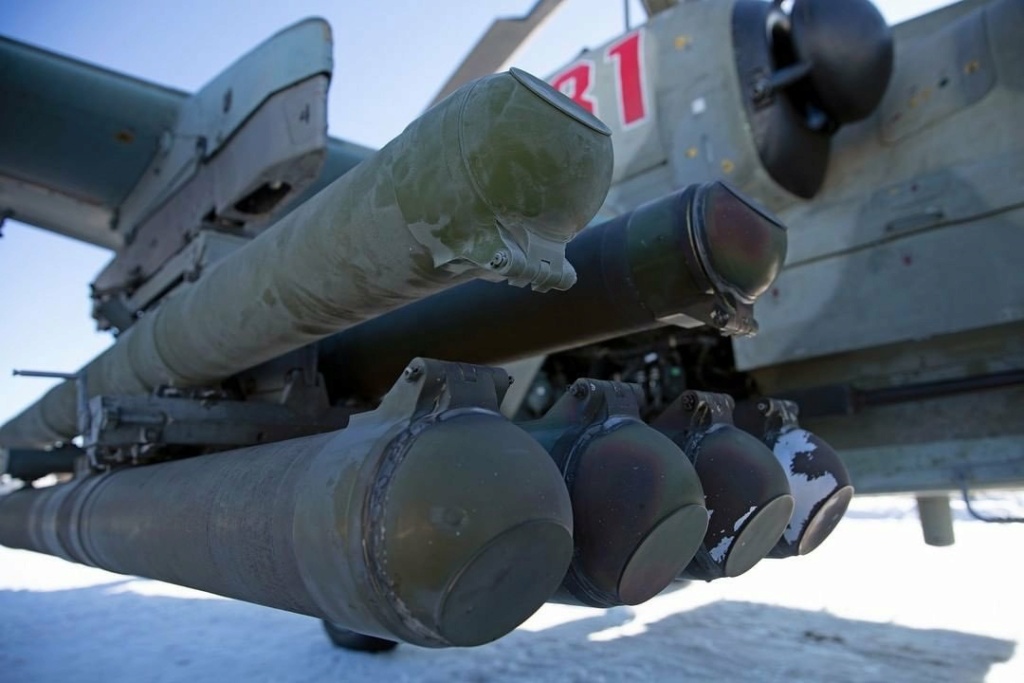 any data on speed, range size of these missile?

Ka-52M helicopter equipped with new guided weapons complex #Авиация Denis Ilyin Yesterday at 3:43 p.m. 639 0 The strike vehicle can carry new anti-tank missiles "Whirl." Ka-52M with Vortex missiles on the outer suspension node of the wing console. Photo: https://commons.wikimedia.org The upgraded Ka-52M helicopter, which is being tested, is getting more details. Thus, during the presentation of new weapons to representatives of the Russian Defense Ministry at the Smolino test site, the Ka-52M with a new complex of guided weapons was shown. The upgrade allows the use of new anti-tank missiles "Whirl". New rocket for new helicopter Russian Deputy Defense Minister Alexei Krivoruchko said the new developments are superior to "existing designs." According to him, the new products can enter service "in the near future." First of all, we are talking about an upgraded Ka-52M attack helicopter. According to the Ministry of Industry and Trade of the Russian Federation, the car made its first flight in August 2020. It is known that the helicopter received a new optical-electronic system, a digital gun drive, and an upgraded sighting system. The Ka-52M will also be able to provide automated pairing with the Sagittarius ground reconnaissance complex. The Whirlpool-1 missile and the shipping container. Photo: Kalashnikov Concern Little is known about the modernization of the Ka-52M weapons, but recent tests of upgraded missiles allow us to talk about it. Thus, on May 26, the Kalashnikov Concern published footage of the tests of the upgraded Vortex missiles. During the tests, the "regular" Ka-52 successfully launched 22 missiles. It is possible that in May the complex, which received the Ka-52M, was tested. New and old Whirlwind-M The modified rocket is much like a basic model. The developers note that improvements have been achieved without changes in the basic tactical and technical characteristics. In particular, the probability of hitting the target with launches from short distances increased, and the overall stability of the missile in flight increased. Recall, the anti-tank missile system "Whirl" began to develop in 1980 in the Tula KB Device. The complex was put into service in 1985, but only the modernized version of the Whirlwind-M, which entered service in 1990, entered mass production. Since 2014, the complex began to enter the army. The 40 kg rocket is equipped with a 12-kg tandem (cumulative-shard) combat part, which allows to hit up to 750 mm armor for dynamic protection. The Vortex develops a supersonic speed of more than 600 m/s, so that the rocket travels a distance of 4 km in just 9 seconds.

Normal stats for the old missile are generally given as 610m/s flight speed (the elevation of the launch tubes is needed because the high speed of the missile means it needs to be pointed directly at the target for launch so it does not have to pull a hard turn to hit it.)

It has two nose mounted control surfaces instead of the normal four to reduce costs... it rolls in flight so course corrections are implemented in flight.

Is there any news on S-8KOR? Did they abandoned the idea of having guided S-8 rocket? Or they actually finished its development but it was not adopted?
GarryB

They are introducing new box shaped launchers that can be stacked and have features like built in wireless charging to keep drone based rockets charged ready for launch.

There was an article about new guided rockets a while back... I think the heavier rocket in 122mm calibre for the S-13 rocket pods was called monolith and there were other models in other calibres that were also being developed.

GarryB wrote:They are introducing new box shaped launchers that can be stacked and have features like built in wireless charging to keep drone based rockets charged ready for launch.

There was an article about new guided rockets a while back... I think the heavier rocket in 122mm calibre for the S-13 rocket pods was called monolith and there were other models in other calibres that were also being developed.