Isos wrote:When they went in Syria Assad was left with only the coast. They were going to loose Tartus. So it's not "immediatly". They webt there at the very last moment. 1 month later Assad would have been dead.

They didn't have any defense agreements with Syria

It's important for people to realize they recognized Syrian land as Syrian...and they had a base in the country.

They do not recognize NK has Armenian nor do they have any bases in NK.

This isn't hard to understand...I am honestly baffled at how people do not understand this.
Tsavo Lion

Well, Jews want the Shoa to be considered singular and thus no other genocide can be a real genocide.

This includes ignoring the fact that Soviet POWs were used as forced labour to build Auschwitz and were the first through the ovens.

Lol the Soviets were pretty big on forced labor themselves with their own people too.
Tsavo Lion

Well, Jews want the Shoa to be considered singular and thus no other genocide can be a real genocide.

The Israeli gov. isn't speaking/acting for all Jews.  opinion
Russia has an arc of instability on its periphery

Is this really Russia military personnel?  In border area?  If so does anyone know where exactly they are?  In this report, it says, they are in border of  NK - ARMENIA. ( syunik County) Where are Iranian vehicles?  Why are they not in border area also.......... Useless bunch........

Armenia/NKR Army is in full colapse..... it was interesting watching the conflict from both sides at the same time in armenian media and MOD and azeri media and MOD

-then it was glorious defence of Hadrut that will stay armenian and again dozens of videos of azeris in Hadrut 2-3 days later and silence from the armenian side about it, no glorious fight no nothing

-yesterday it was again MASSIVE counter attack from armenia in all armenian news in the south to cut the azeri army of in Mincivan and Zəngilan and give them a massive couldron battle, now nothing silence about the "massive counter attack" and again videos from the azeris of massive destruction of armenian forces and new videos of azeris already pounding armenian forces 30km to the north half way to Laçın the only major supply rout from armenia to NRk...

armenia got destroyed, reminds me of a post i did here 7,5 years ago


NationalRus on Mon Aug 19, 2013 6:00 am
the only logical result to solve the problem, sad but armenia will never give back NkR and the people of NKR will never agree to give up ther homeland, azerbaijan will never accept the lose of its territory or a politcal soultion loosing them, or it will be a endless status quo ( and endlessnes is impossible) or it will be fought out again, and then it depends how much of an edge to the azeris have, how well the armenians are trained and how deep dug in, and will turkey make a move

This war is pretty bloody. Russia won't stop the war because it's beneficial to Russia to sell military hardware to both sides.

another Azeri BTR-82A captured by Armenians

Southern part of NK is almost totally under AZ control. Armenian side is throwing their human reservoir to the combat as to stop AZ army at all costs, but I doubt it will change anything. Armenian side should try to give up legit AZ lands and try to negotiate for rights of Armenians of NK.

As long as Turks are helping Aliyev, advance into  Armenian land. Then Russia and Iran will not stop helping  Armenia. You have seen Russian soldiers in Armenia proper. So Sultan Erdo, can forget attacking Armenia. And as far as Artsakh. Then Armenians will not give up legitimate rights. So time for Turks to go back to Anatolia. AZER is not their territory. AZER soldiers now, have reclaimed land. No reason to die in endless war, against Armenia. Over Armenian land. They should turn against Aliyev and Erdo gang . Get him out of power. With little help from you know who.

I don't care, who Armenians are in bed with .  The Kardashians or Soros or Hillary cliterous . As long as there are no donkeys  ( a slang in Iran for Turks) or Azeri separatists there.

nomadski wrote:As long as Turks are helping Aliyev, advance into  Armenian land. Then Russia and Iran will not stop helping  Armenia. You have seen Russian soldiers in Armenia proper. So Sultan Erdo, can forget attacking Armenia. And as far as Artsakh. Then Armenians will not give up legitimate rights. So time for Turks to go back to Anatolia.

I would prefer if the turks would also give up Anatolia and return to central asia (and/or move to Germania or Gallia).

Defenders in the mountains have the advantage against superior forces.
Taking those areas around NK bought the Armenians these 2 weeks; I suspect, as mentioned before, that it's a plot to provoke Iran-Turkey war.
The Iran-Iraq War was also in the Western & Israeli interests.
medo

Armenians suck at hiding their stuff.

This osa is on a "road" in the middle of nowhere so it's easy to spot them.

They need to clean the footprints of the vehicles and use more vegetation and dummy AD vehicles in the area where they deploy real AD. Fake Osa are easy to make with some plastics and woods. Drones have not sophiticated EO to spot real target from fake ones. They need 10-15 dummy vehicles for every real one.

I got this off spacebattles.com;


... Meanwhile, PM Pashinyan instructed his foreign minister Zohrab Mnatsakanyan to spare no effort for securing a meeting with the US Secretary of State, Mike Pompeo. Pashinyan is said to have tasked the Armenian embassy in Washington, the Armenian lobby, and communities in the US for this purpose. The embassy has reportedly allocated funds from the state budget for hiring American lobbyists, including former senator Bob Dole, as well...

Apparently Pashinyan knew that something was up (duh!) well in advance and instead of contacting Moscow he was running off to Pompeo (who didn't even meet with them) to save their asses

I don't understand the point your making Papa.

Are you saying he is going to sell Armenia out to the West to save NK?.
Isos

Are you saying he is going to sell Armenia out to the West to save NK?.

He is saying he choosed US over Russia as support since long time ago and probavly burned his chances to see Putin saving his ass.

Turkey poised to deploy troops to Azerbaijan if requested

ANKARA, October 21. /TASS/. Turkish Vice President Fuat Oktay confirmed on Wednesday that Ankara was ready to deploy its troops to Azerbaijan to back Baku in the Nagorno-Karabakh conflict.

"Our president [Recep Tayyip Erdogan] announced it on the very first day [of a renewed escalation in Nagorno-Karabakh]. Turkey does not hesitate and our president does not hesitate," Oktay said in a televised interview with CNN Turk answering a question from the TV host.

Ankara reiterated earlier its support to Baku and voiced readiness for assistance both at the negotiation table and on the battlefield.

A sensible path of attack, down the flatter land.


MiddleEastWatch
@MiddleEastWatc1
·
2h
Breaking:-
The Azerbaijani Defense Ministry announces the liberation of one town and 21 villages in southern parts of Karabakh region from the Armenian forces. 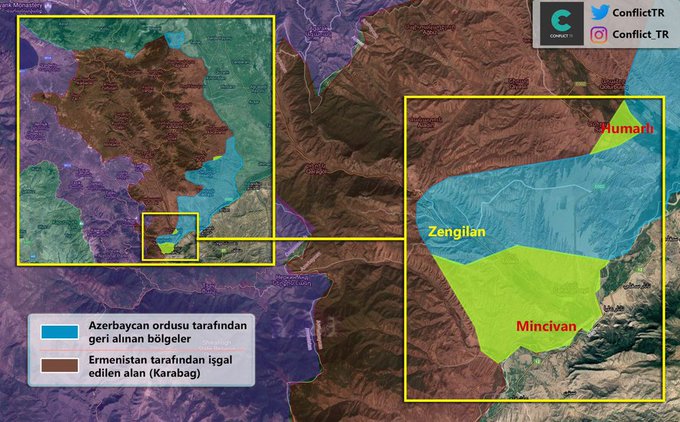 MiddleEastWatch
@MiddleEastWatc1
·
20 Oct
The latest map of the ongoing conflict in #Karabakh between Azerbaijan and Armenia. Seems like the Azerbaijani forces are focusing on getting full control of the border line between Iran and #Karabakh region. 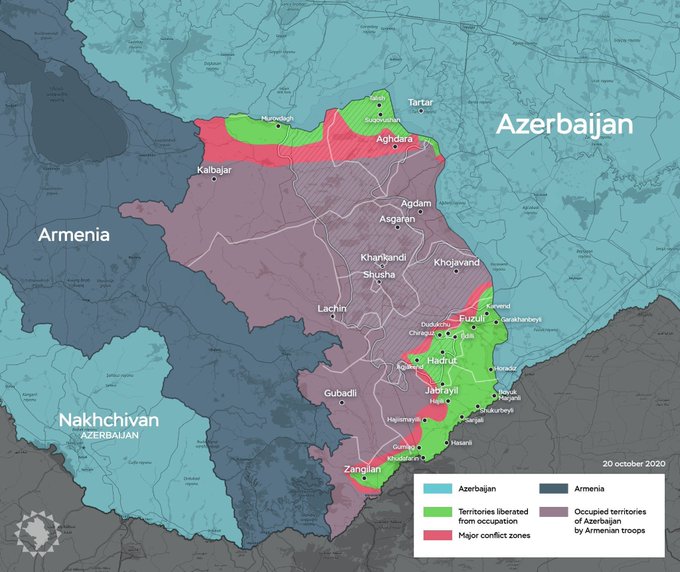 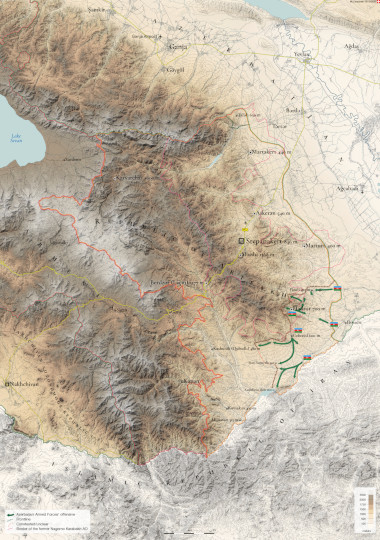 Are you saying he is going to sell Armenia out to the West to save NK?.

Azeris were getting ready for this since the 90's and everyone could see it, and how was Armenia preparing to counter it? By torching links to one country that could save them (Russia is right next door to Armenia unlike with Serbia)

Ah then yes Armenia is losing the war now, so if this keeps up NK will fall.

Armenia did not prepare and that cost them.
Isos

SeigSoloyvov wrote:Ah then yes Armenia is losing the war now, so if this keeps up NK will fall.

Armenia did not prepare and that cost them.

They were not prepared to save NK but they are quite prepared to inflict terrible damages to Azerbaijan in a full war with the iskanders and the su-30.

They also have domestic drones and suicide drones that they seem not to be using and keeping them probably because they can't produce a lot and the material thatvthey would destroy right now would be replaced quickly thanks to the oil and gas that Azerbaijan sells.

In a full out war, Iskander and su-30 could destroy their economy and the "tactical" weapons would stop any invasion untill Russia helps them.
lyle6

SeigSoloyvov wrote:Ah then yes Armenia is losing the war now, so if this keeps up NK will fall.

Armenia did not prepare and that cost them.

Nonsense. The Armenians have committed but a small fraction of their military potential thus far, and nor have we seen the Azeris making any inroads into the strategically significant highlands. Instead, much of the territorial gains made by the Azeris are confined to the indefensible steppes where they are placed under fire control from the commanding heights and they are reaping quite the butcher's bill for it.

If anything, its the Azeris and Turks who are on a ticking timer. They only have a few weeks before winter sets in and literally freeze the conflict for them.