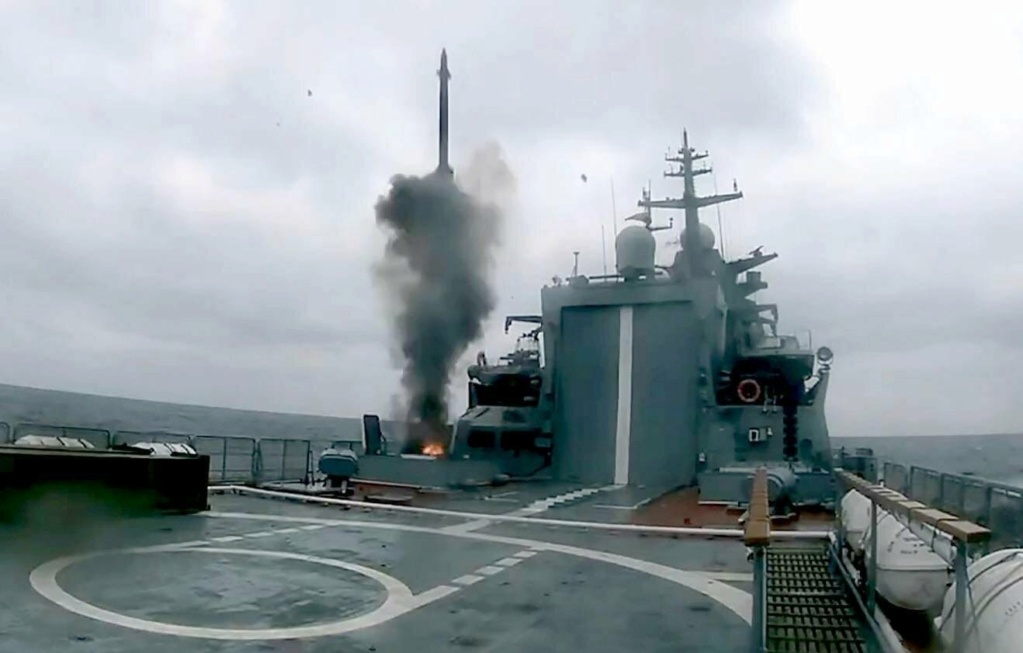 Seems like the navy is ordering 4 more gremys (yay) for the pacific fleet? Have they given up on laying down 20830 all together or does 20835 give them some capability they need in particular in the pacific fleet?

Corvette of the latest development "Zealous" project 20380 in 2021 will complete the tests and will become part of the Black Sea Fleet (Black Sea Fleet), sources in the military department told Izvestia. The vessel is equipped with new radars and improved weapons, which can significantly increase the capabilities of the Russian Navy not only in the Black Sea, but throughout the Mediterranean region, experts say.

The press service of Severnaya Verf, where the ship is being built, reported that the officers and sailors of the future crew of the Retivoi have already completed a two-month training course in St. Petersburg at the unique training complex Mosttik-2000.

Former UN Deputy Secretary General Sergei Ordzhonikidze told Izvestia that recently, on the border with Russia, NATO's military infrastructure has been approaching not only land borders, but also sea ones.

“In the Black Sea basin, the United States has NATO allies in the military-political alliance - Turkey, Romania, Bulgaria. This contributes to the ability of ships to refuel and be serviced in the ports of these states, that is, they can stay there for a long time. This speaks of the growing threat to our country, including the nuclear missile. Of course we have to react. Unfortunately, our Black Sea Fleet is not strong enough in comparison with the aggregate power of NATO countries in this region, ”Ordzhonikidze said.

According to him, the Russian side is also concerned about other issues, including Turkish statements that "they will dig a canal parallel to the Bosphorus and the Dardanelles." He noted that now Russia should concentrate its forces on increasing its naval presence in the Black Sea due to the increased importance of the southern flank at the present time.

“In the south, the threat concerns not only the Krasnodar Territory or Crimea itself, NATO countries are signaling support for Ukraine. The ships of the alliance call in Odessa, arrange joint maneuvers. But any appearance of a destroyer with "Tomahawks" in the Black Sea means that the missiles from there reach Moscow. If they are nuclear-armed, then this is an immediate threat, ”Ordzhonikidze said.

Lurk83 wrote:Seems like the navy is ordering 4 more gremys (yay) for the pacific fleet? Have they given up on laying down 20830 all together or does 20835 give them some capability they need in particular in the pacific fleet?

Right now it appears like it will be 6 of each when present orders are complete. The 20385 gives them Kalibar capable ships in the Pacific.

Corvette Boyky in the Baltic, June 2021: 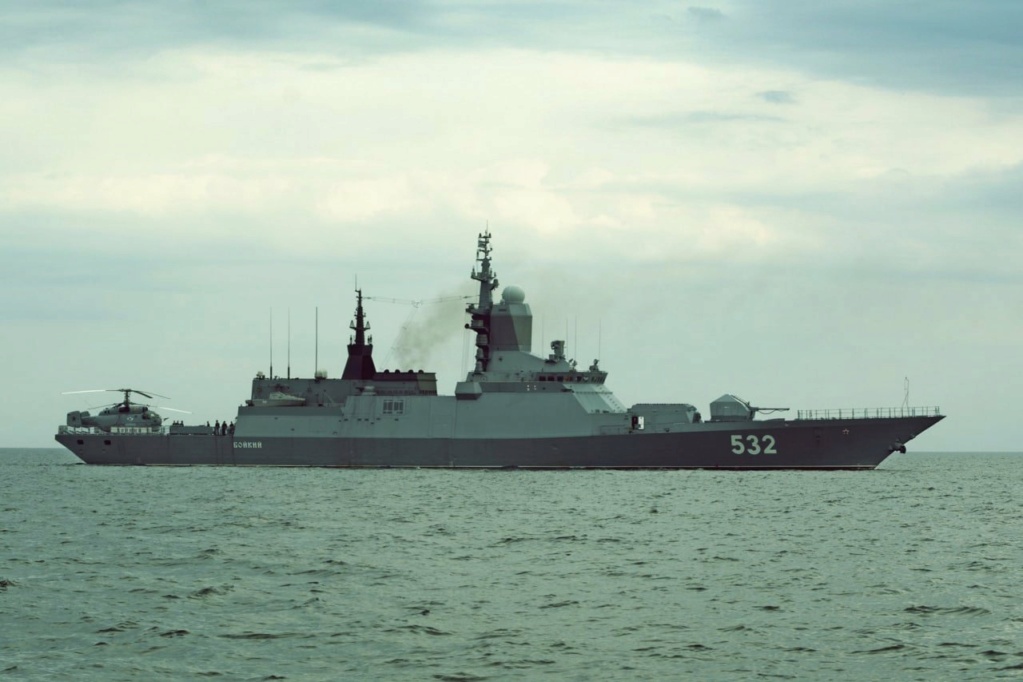 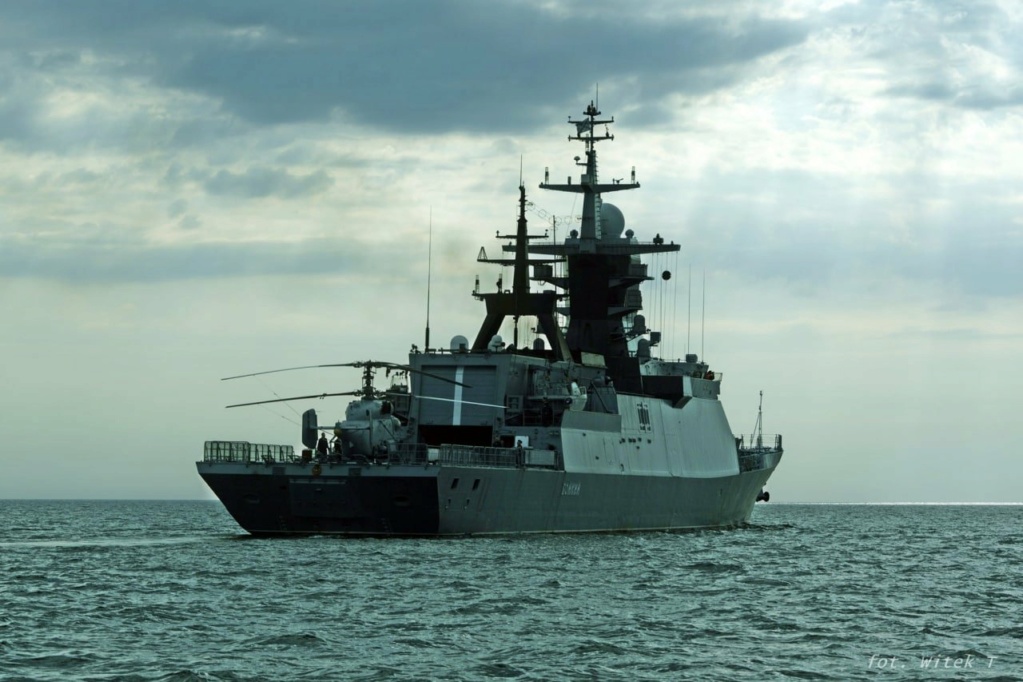 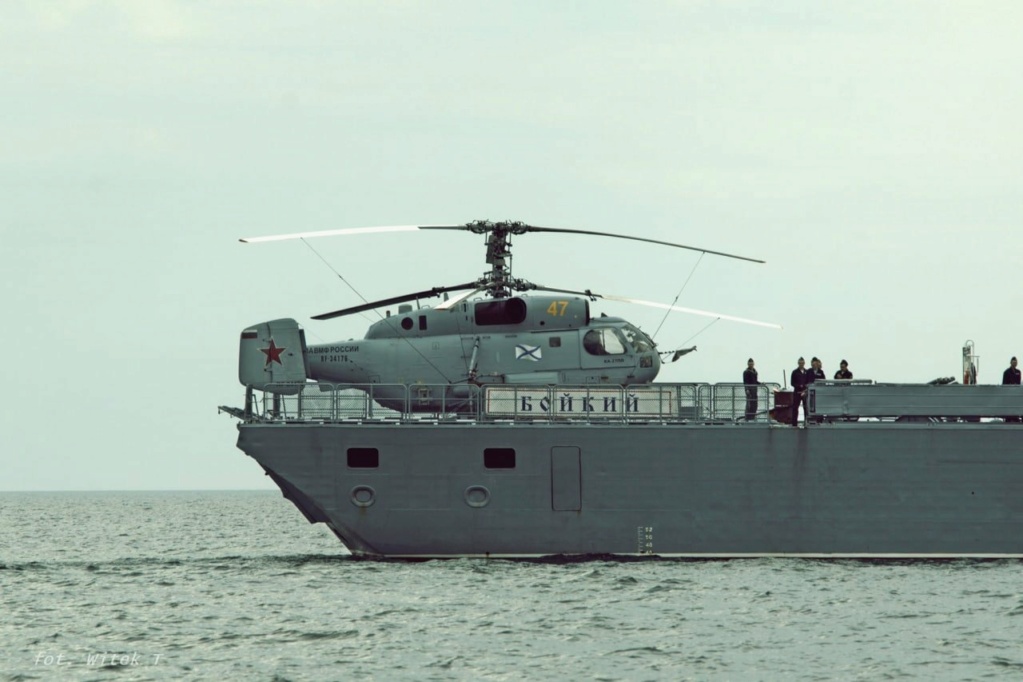 Amur Shipyard is preparing to move the corvette Rezkiy out of the workshop building onto the outfitting pier for the next stage of construction: 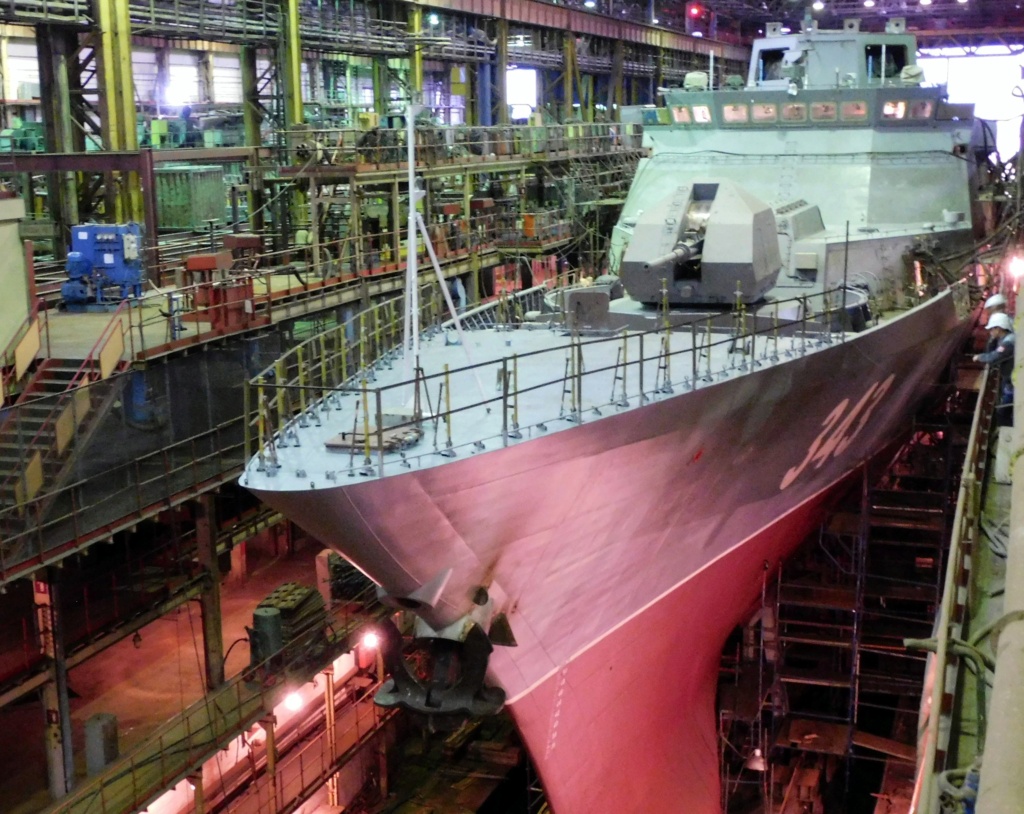 It seems like now the Amur Shipyard has started to build the 20380 series ships even faster than Severnaya Verf, truly amazing considering the condition the shipyard was in just a decade ago.

Took some time, bit of threats, legal cases & (I believe?) some management arrests but yeah Amur is positively pumping them out now.

The shipyard moved from private ownership into the United Shipbuilding Corporation.

You have to build up a supply chain. And the Amur region is not around the corner.

It seems to be an export version

Wondering if that is a coincidence, that the 22160 up-armored and enlarged version was presented at just the same time.
This thing needs less internal space compare to standard Redut cells. You can just place a 2 cell combo for a small ship, still giving it 8 close defence missiles, with a need of only 3m under a deck or even less.

EDIT: And some pretty pictures and a video (more in link): 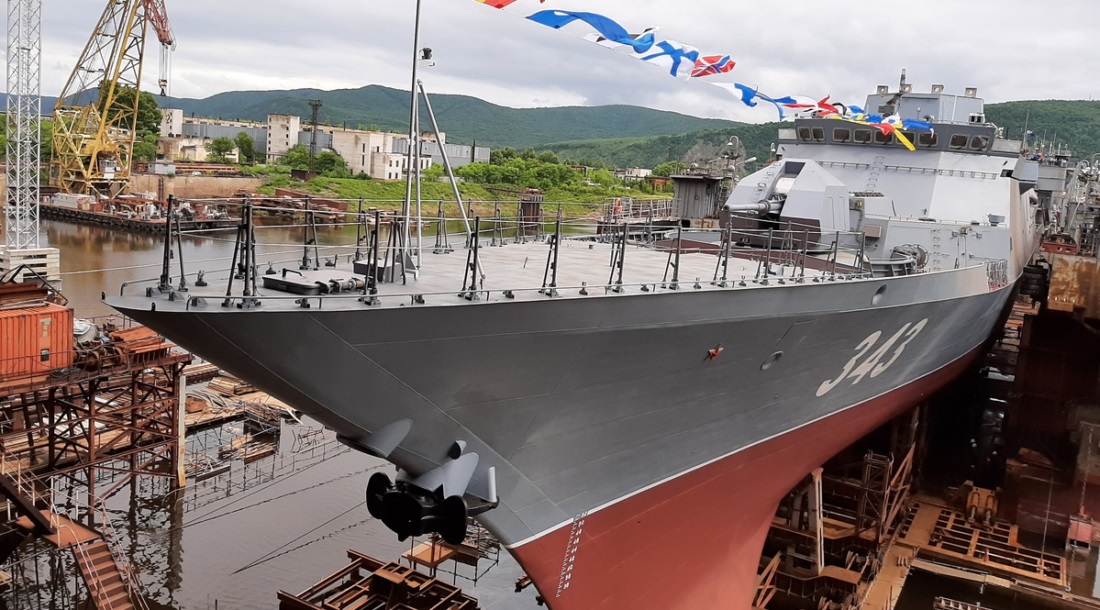 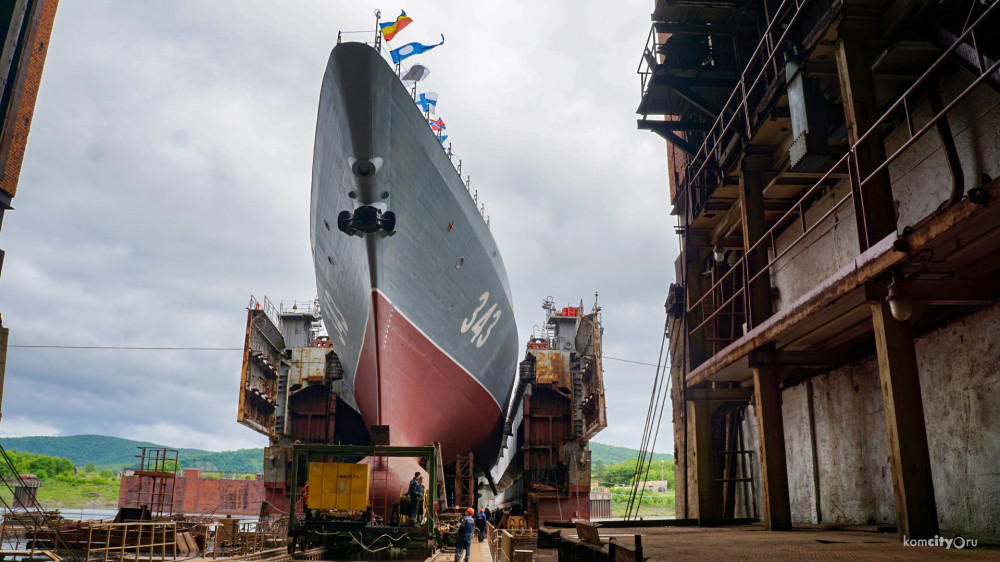 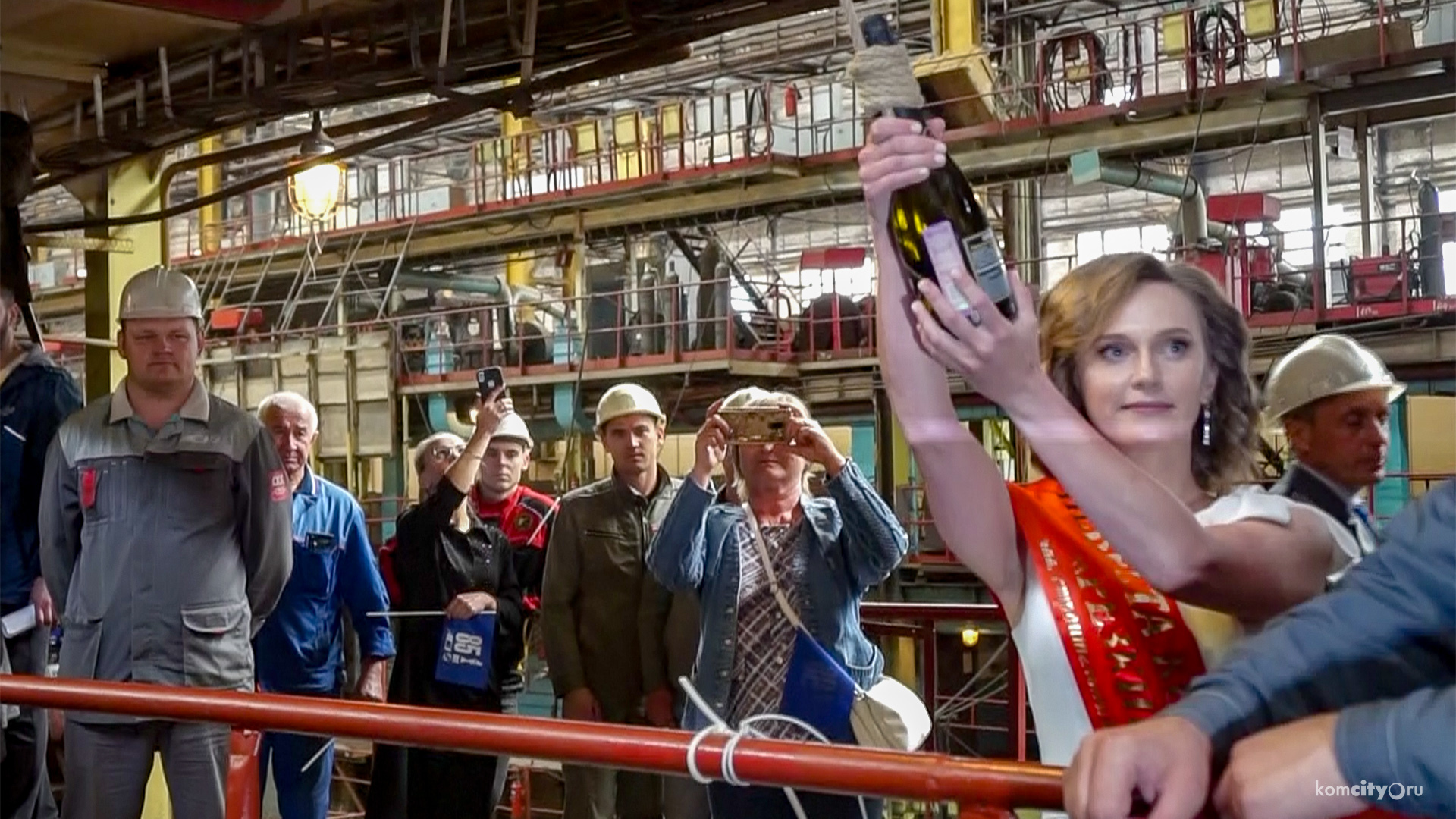 owais.usmani wrote:Amur Shipyard is preparing to move the corvette Rezkiy out of the workshop building onto the outfitting pier for the next stage of construction:


Corvette "Rezkiy" left the slipway shop of the Amur shipyard

On July 1, 2021, at the Amur shipyard (part of the USC), a multipurpose patrol ship (corvette) of project 20380 "Sharp" (factory building No. 2104) was withdrawn from the workshop and put into the outfitting dock. For this order, the slipway construction period has ended. Ahead - outfitting work and tests.

According to the established tradition, the withdrawal of the ship from the slipway was preceded by a solemn event dedicated to this significant event, in which representatives of the Pacific Fleet, the Government of the Khabarovsk Territory and the administration of Komsomolsk-on-Amur, the Ministry of Defense of Russia and the Navy, as well as representatives of the USC took part.

It is noteworthy that the withdrawal of the ship took place on the day of the celebration of the 85th anniversary of the launch of the Amur shipyard into commercial operation.

“A new page has been written in the history of the three-time-awarded enterprise by the hands of our factory workers. On the day when the next corvette, being built for the Navy, leaves the slipway for further completion and testing, we are celebrating the 85th anniversary of our beloved plant. Congratulations to all of us on this double holiday! I am proud of my team, its strength, endurance and faith in my plant! " - said the general director of the Amur shipyard Vladimir Kulakov at a solemn meeting.

ASZ is the main base in the Far East for the construction of warships for the Pacific Fleet. The Amur shipbuilders successfully mastered the construction of project 20380 corvettes, the state's combat capability was strengthened by three patrol boats: "Perfect", "Loud", "Hero of the Russian Federation Aldar Tsydenzhapov", "Sharp" will join them by the end of the year. This line will later be continued by the new corvette "Grozny".

The construction of patrol ships of the next project, the contract for which the ASZ received at the end of last year, will begin with the Buyny corvette - the plant must fulfill an order for six combat units by 2028. Recall that ASZ is currently working on another important military order, a series of four small missile ships of the "Karakurt" type. 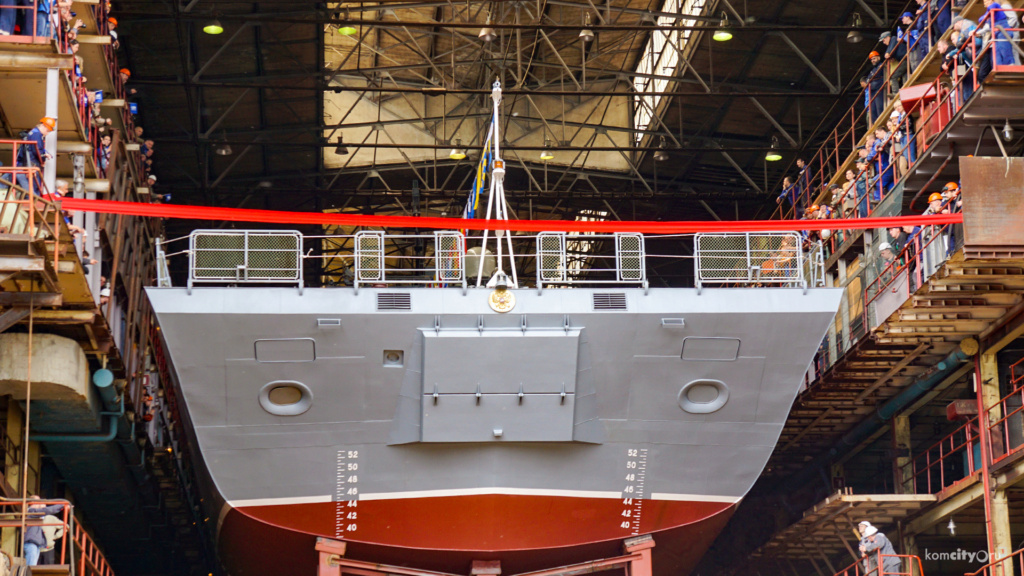 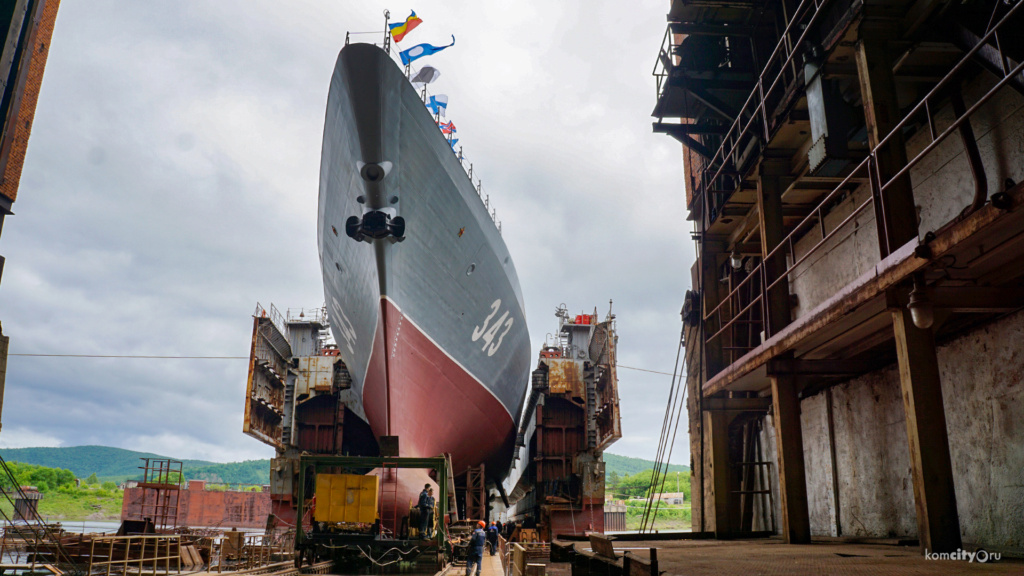 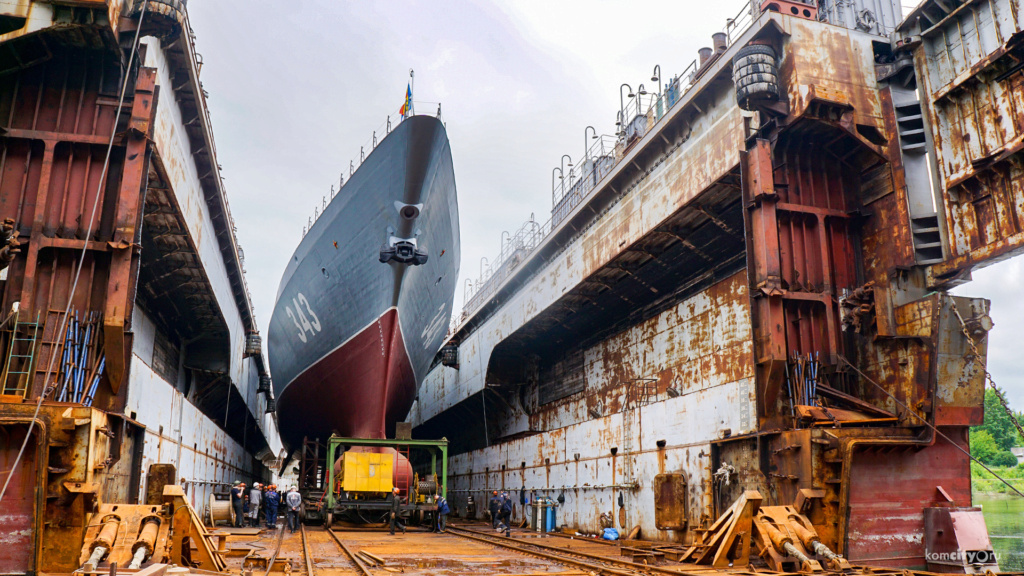 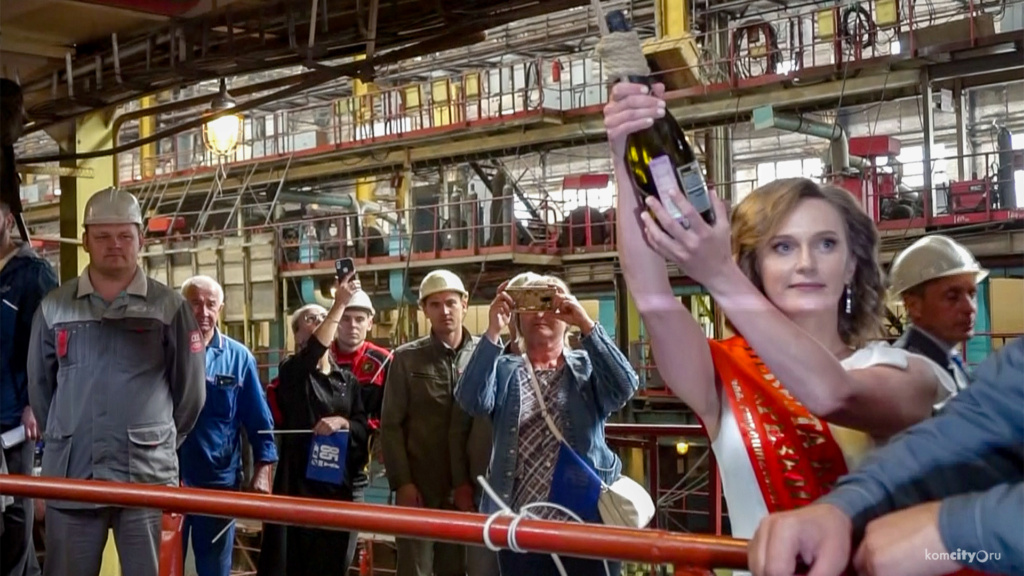 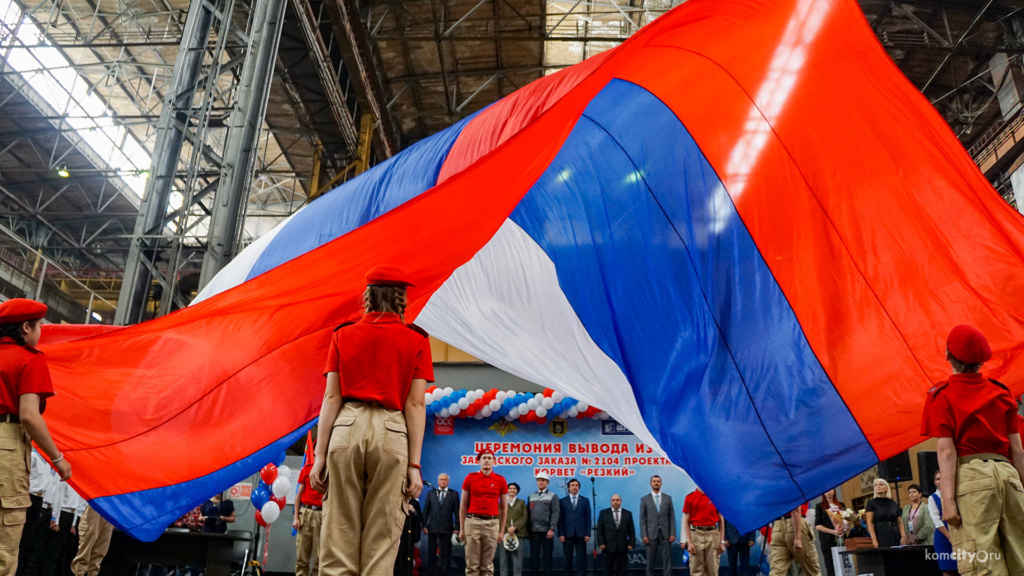 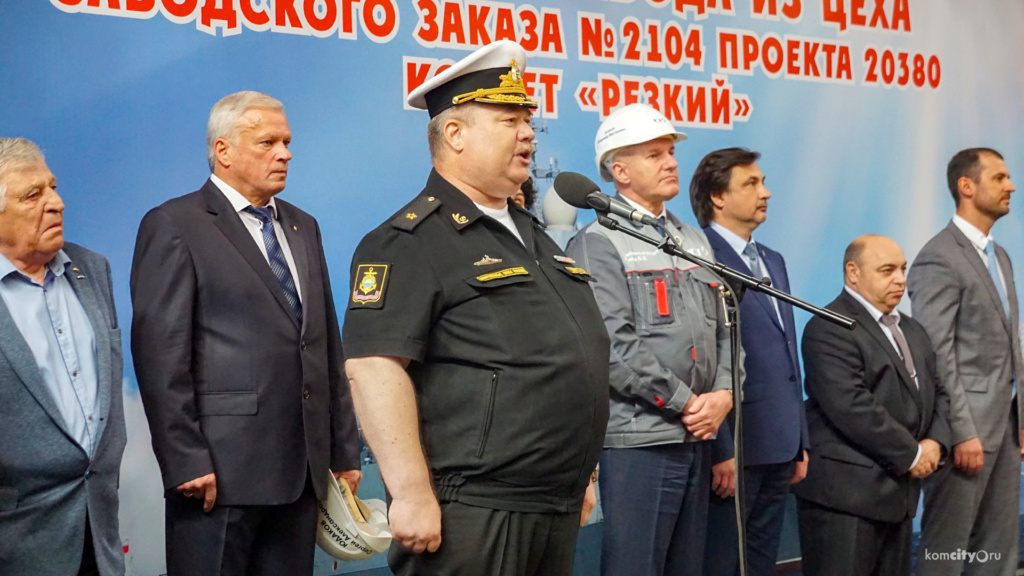 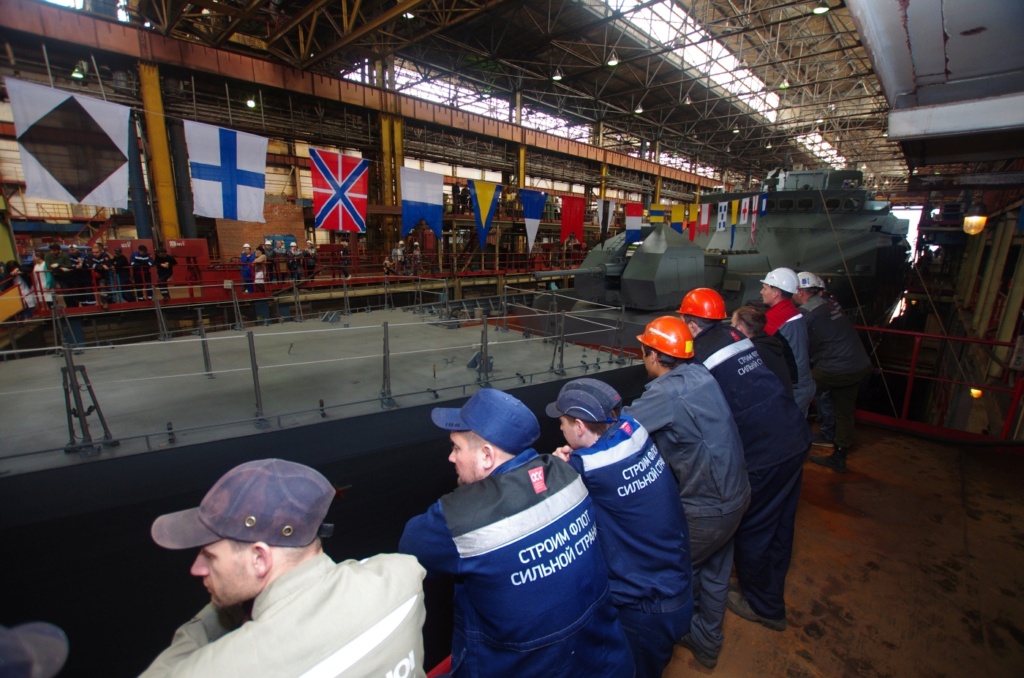 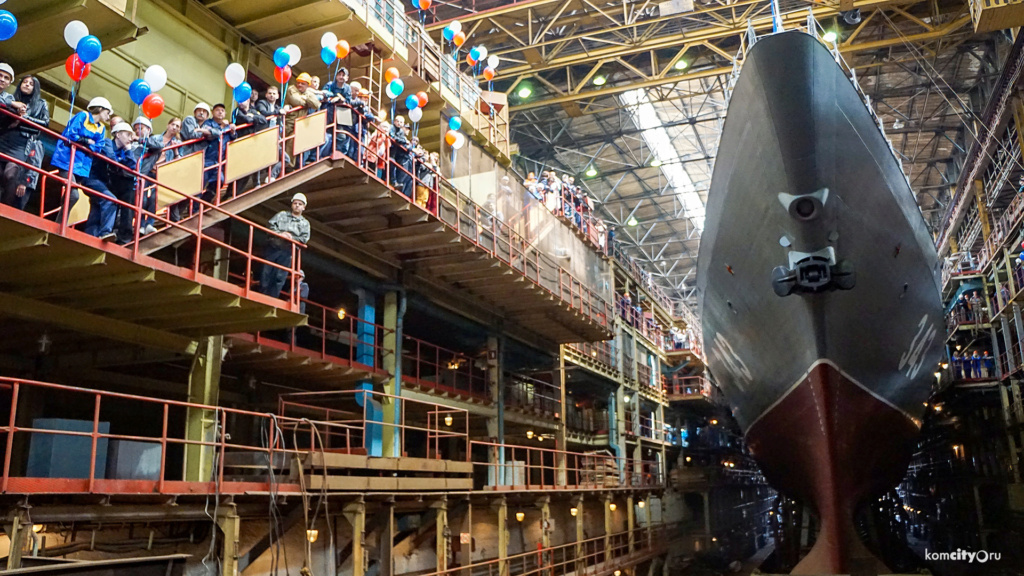 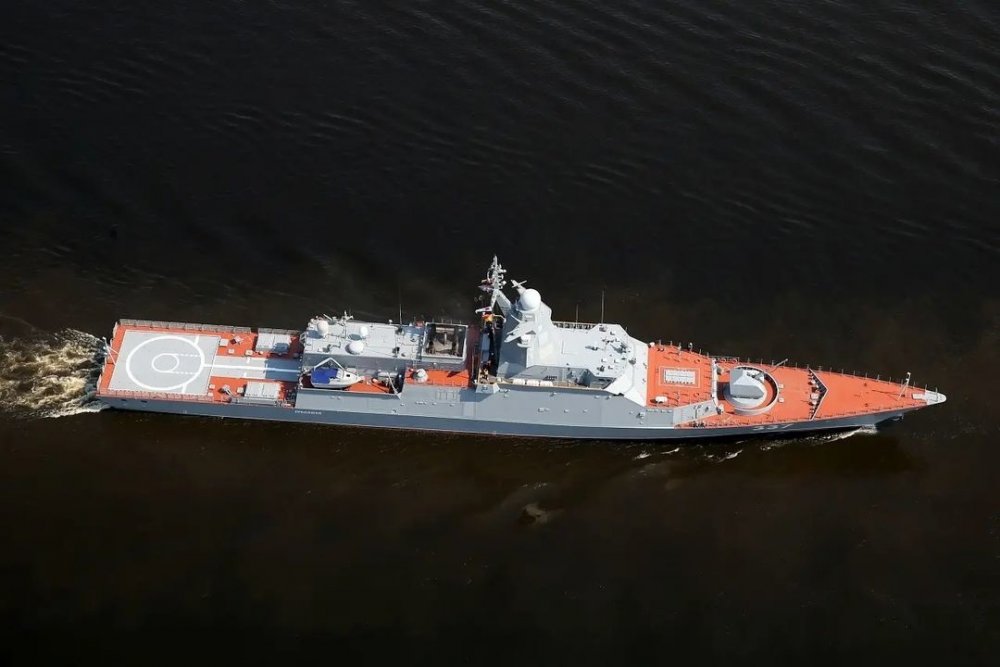 The Amur Shipbuilding Plant, part of the United Shipbuilding Corporation, plans to deliver one of the corvettes of the project 20380 - "Rezkiy" (Eng: Sharp) - to the Victory Day celebration in 2022, four months ahead of the contract deadline. The general director of the plant, Vladimir Kulakov, reported this to Prime Minister Mikhail Mishustin during his visit to the completion pier of the plant.

The multi-purpose patrol ship "Rezkiy" is one of several corvettes of the project 20380, the construction of which was mastered at the Amur plant. At the beginning of July of this year, the "Rezkiy" left the slipway shop and was put into the completion dock, where it will undergo final work and tests. The very withdrawal of the ship also took place on the day of the celebration of the 85th anniversary of the launch of the Amur Shipbuilding Plant.

"It is being commissioned in 2022 under a contract. But we will try to hand it over four months earlier - by Victory Day" –– Kulakov said, presenting the Sharp corvette to the head of the government.

Later, the chief builder of the plant, Yuri Lysenkov, explained to journalists that the plant thus plans to make a "gift to veterans" of the Great Patriotic War. "This is a kind of tribute to our veterans. It will be difficult, but we will definitely try to fulfill it" – he said.

The radar mast has already been installed on the Rezkiy corvette 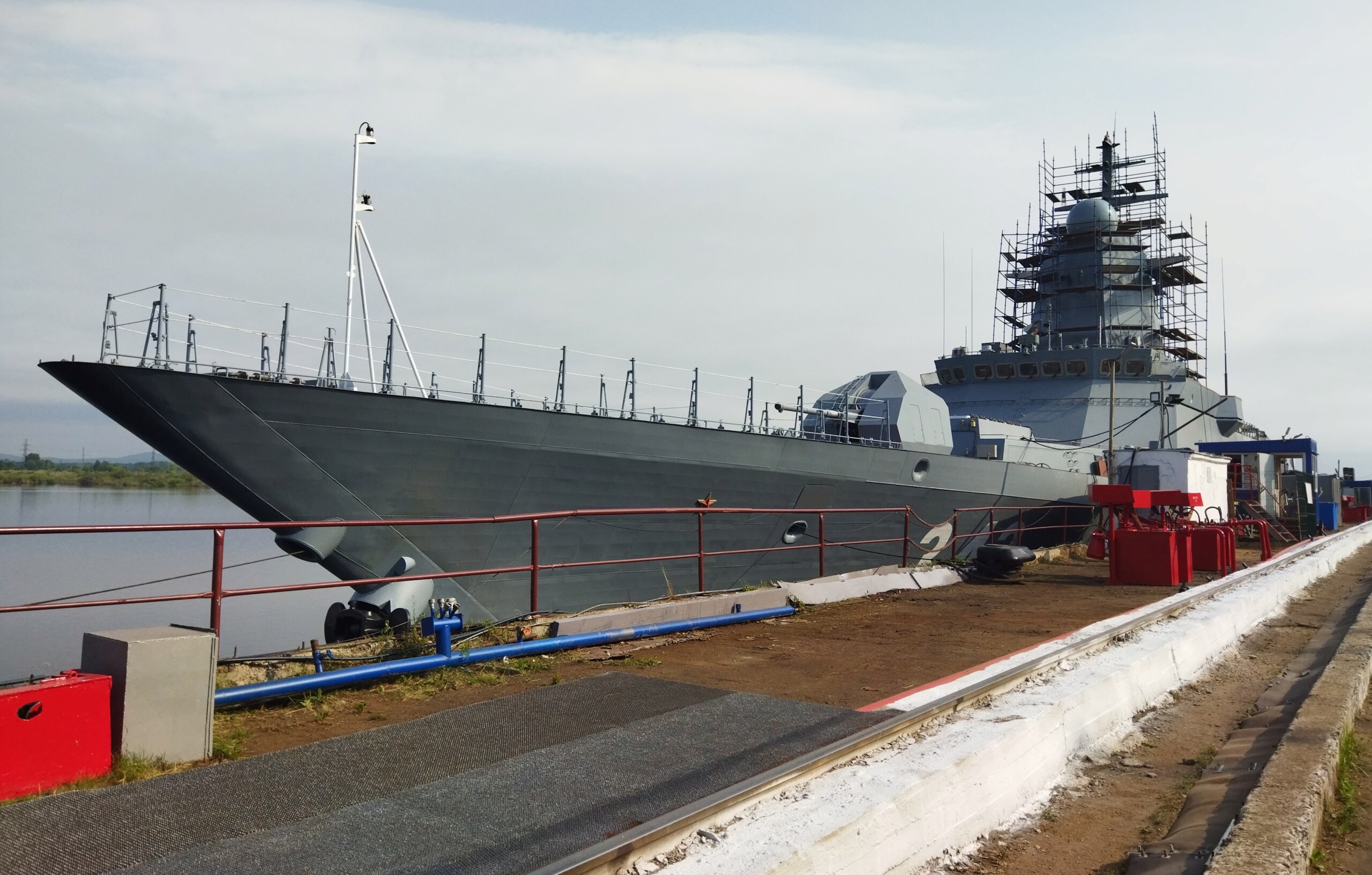 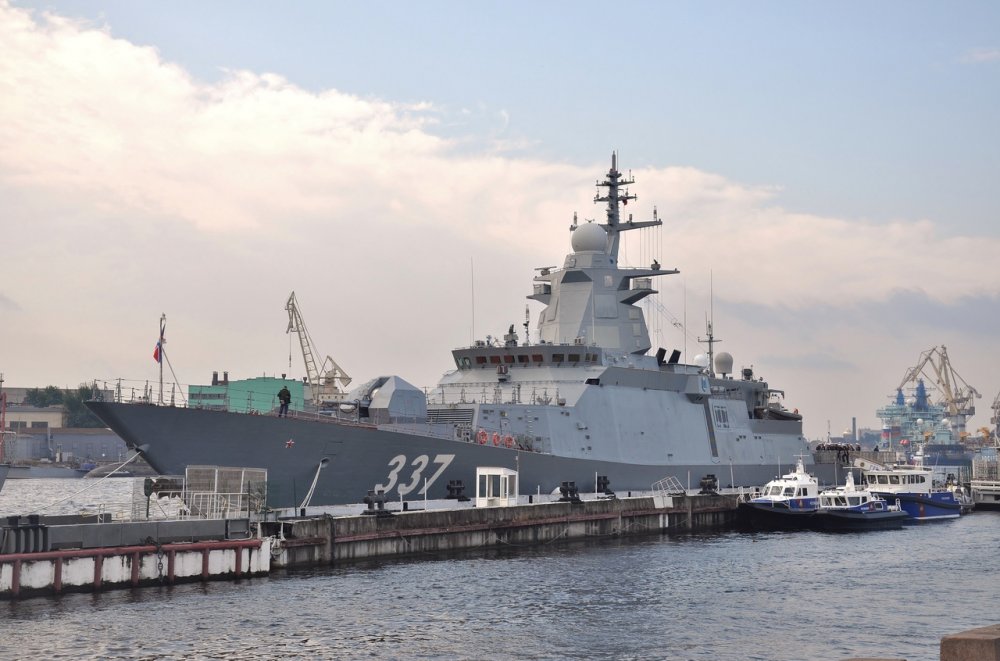 Amazing turnaround for the Amur Shipyard which 10 years ago was a basket case. Much credit to the management and Russian government for a job well done.

According to Izvestia, the Amur Shipbuilding Plant will lay down the Grozny Project 20380 and Buyny Project 20385 corvettes this month for the Pacific Fleet that are planned to be completed in 2024–2025.
https://iz.ru/1207604/roman-kretcul-anna-cherepanova/tishina-okeanu-na-dalnem-vostoke-zalozhat-dva-korveta