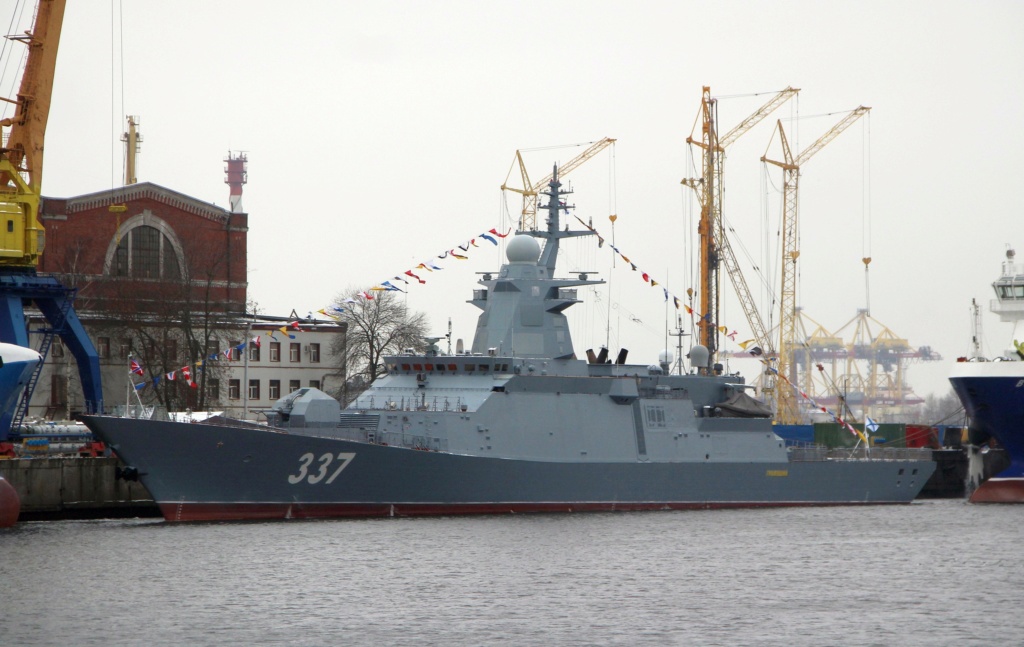 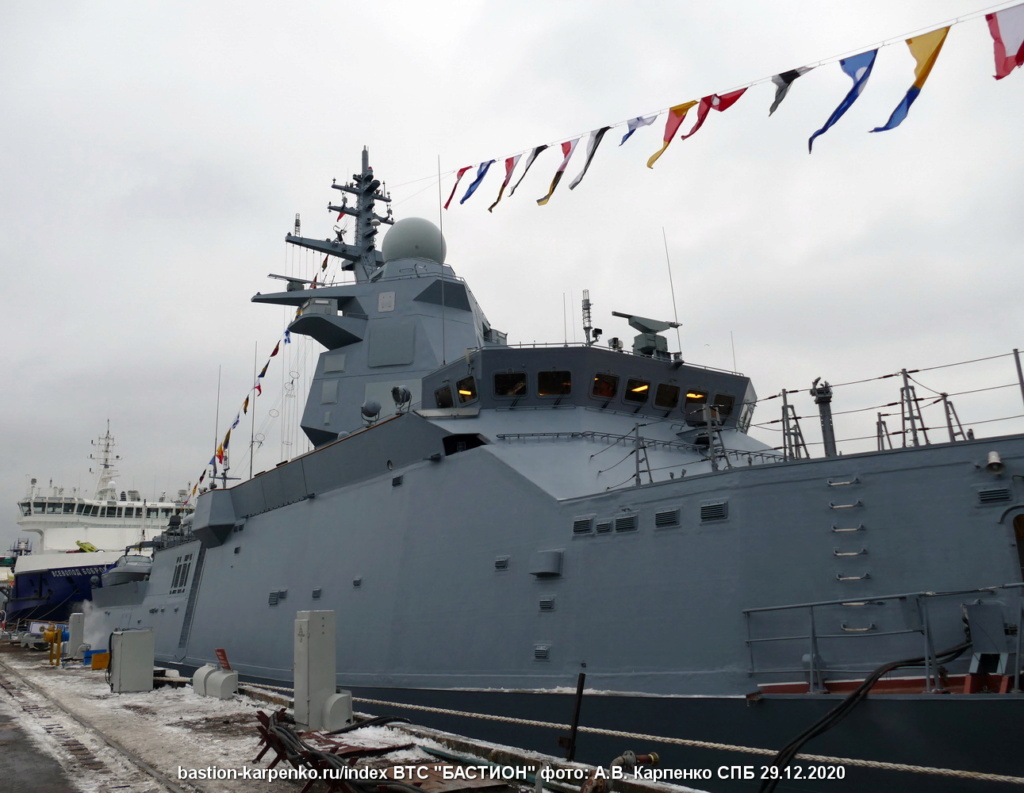 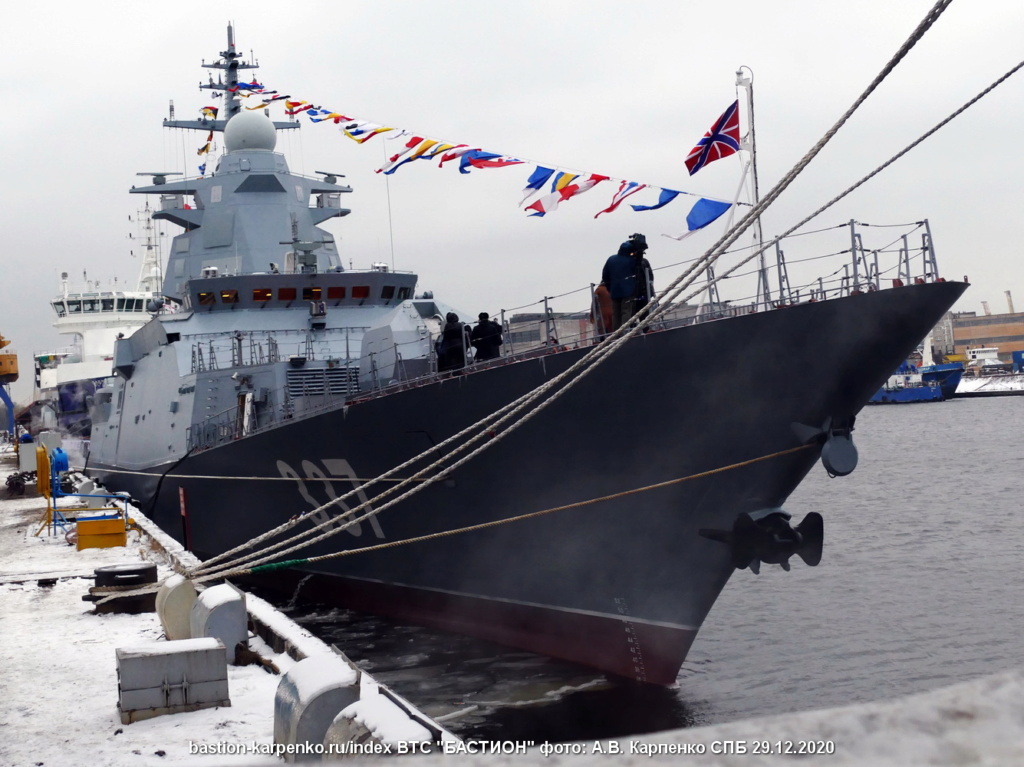 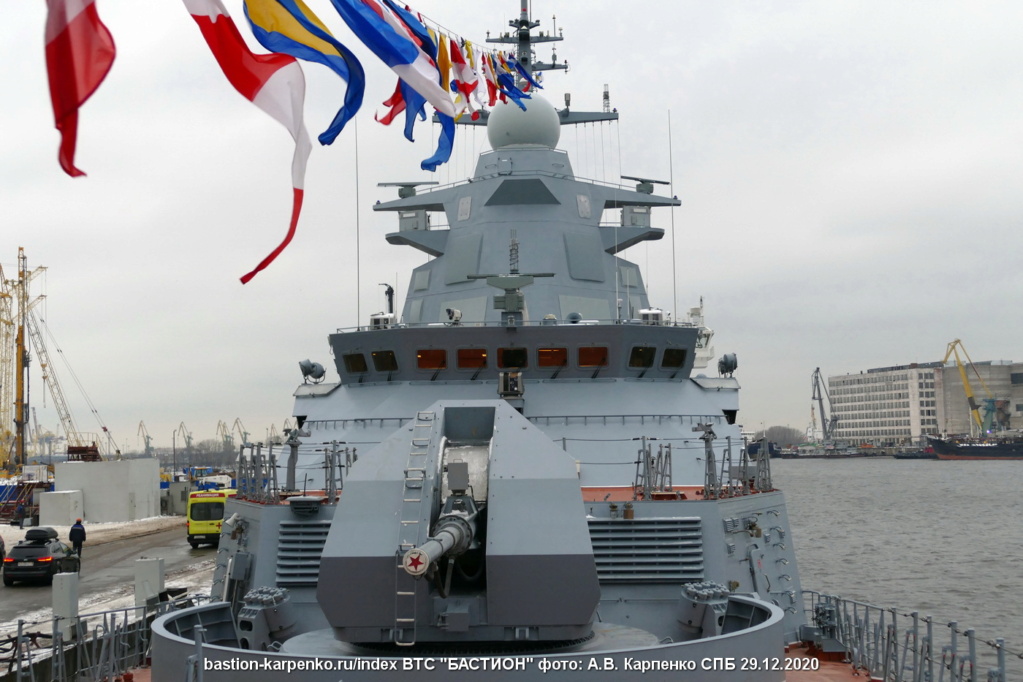 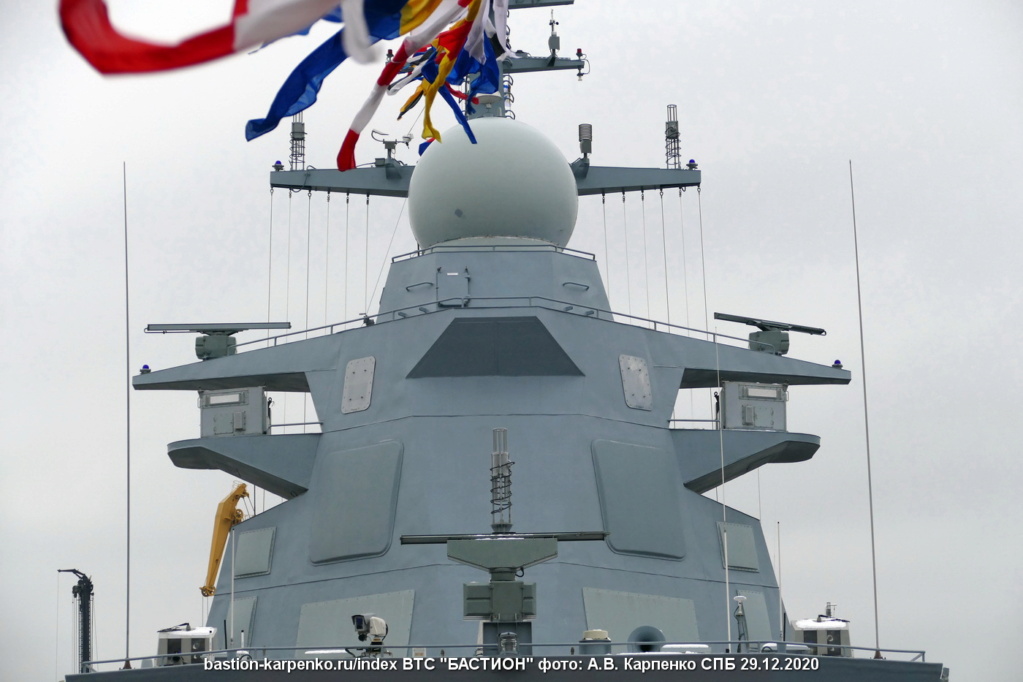 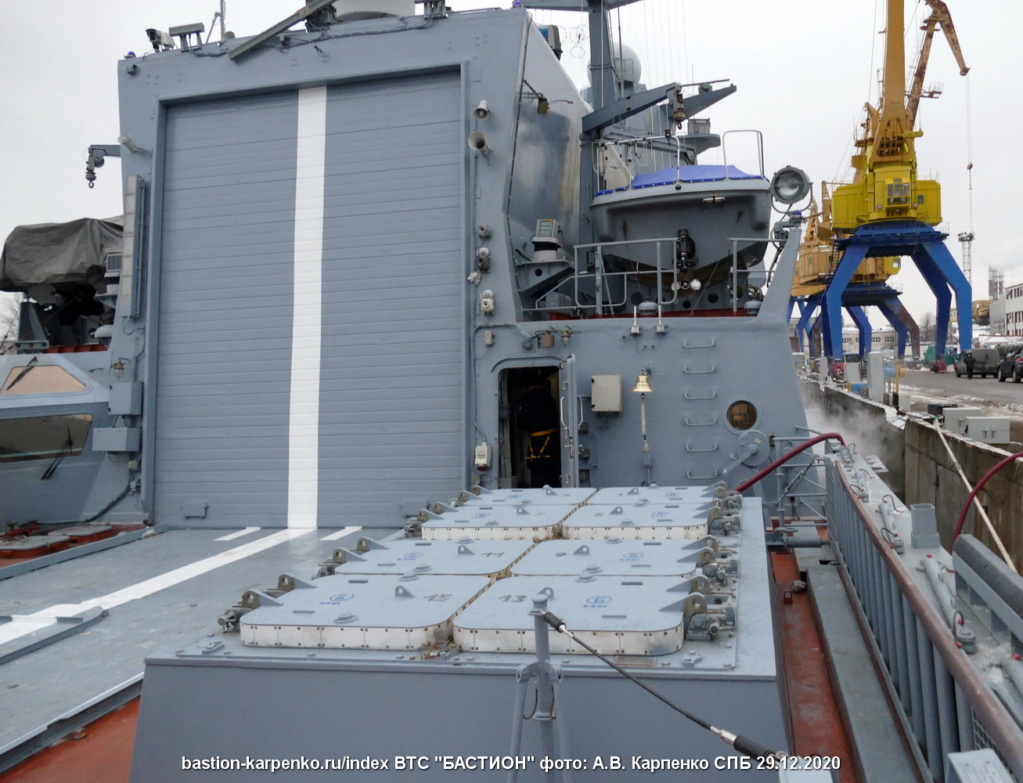 With them flying off the shelves nowadays (so to speak) it's a good moment to remember the early days of the program and how with all the delays of the first few ships there were plenty who said that it's proof Russia will never be able to recover its shipbuilding ability. It may be a long time to us, 15 years or so, but in the context of a modern state that's not too bad at all.

Hopefully they can keep executing at this new rate

I wonder why they've plated over the (what we've previously identified as) IO areas? Looks temporary so either just supposed to hide for the launch (which would be silly since there are already a heap of pics of the interior), maybe its not actually IO or there is some incomplete rework going on?
Aldar Longname has external IO balls up top 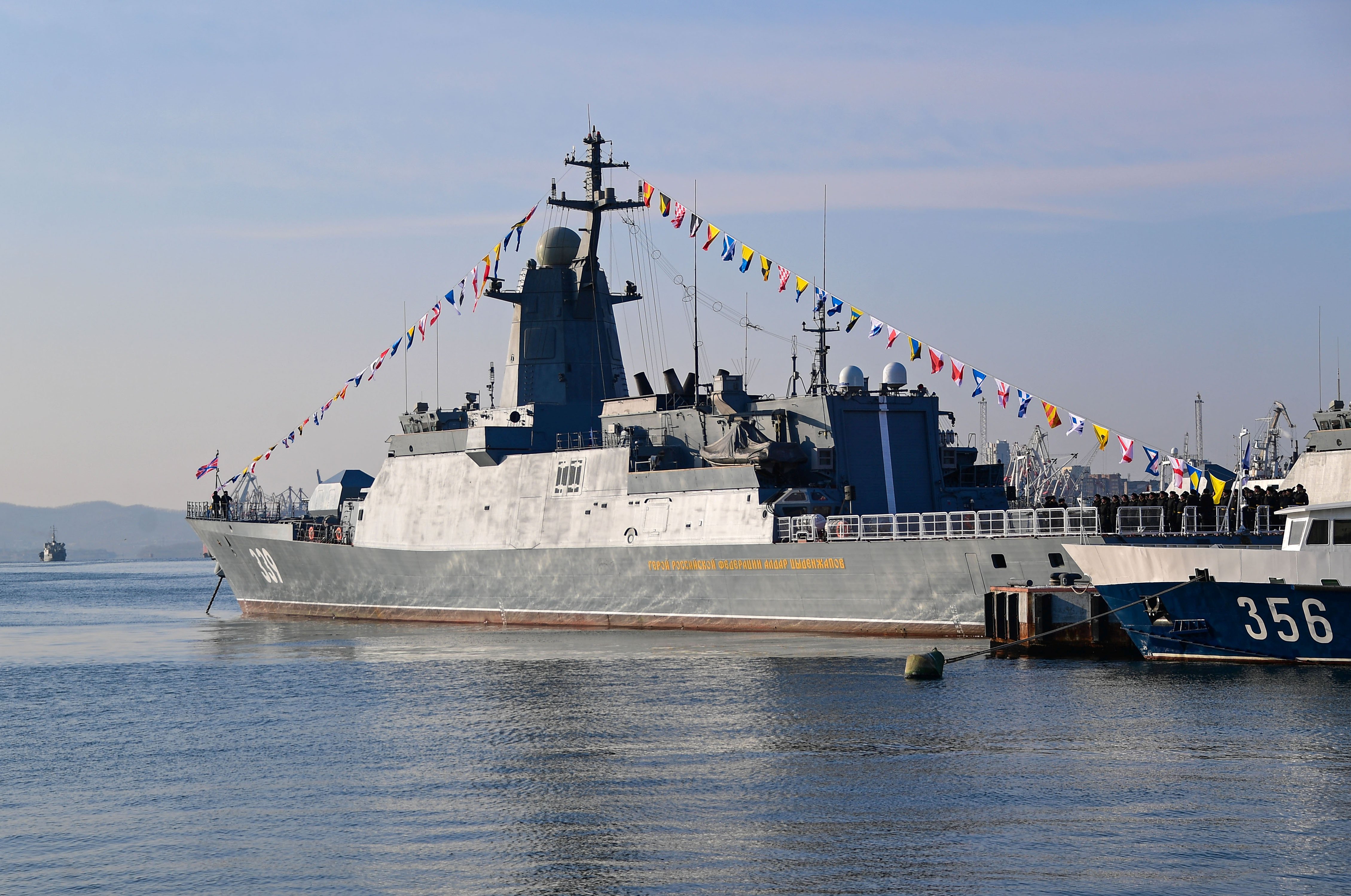 Covers over the lower passive OTH antennae looks very like the cover on the first few 22800s -> maybe those do actually have that antenna? (I had decided there is probably just an older Monolith antenna inside since they apparently returned to one on the later versions)

Such a great looking ship

An interesting comparison (at least proportion wise) from Balancer: 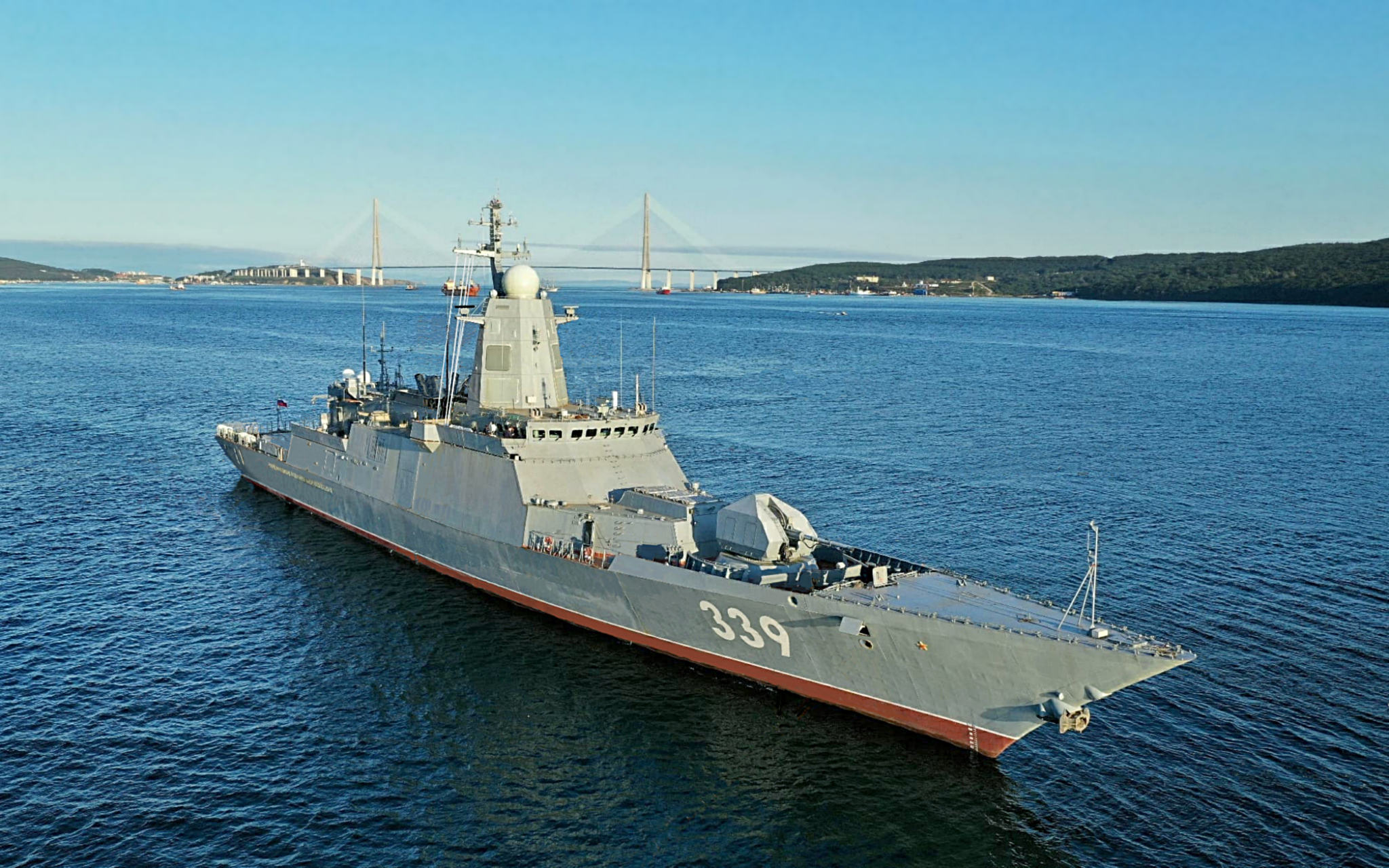 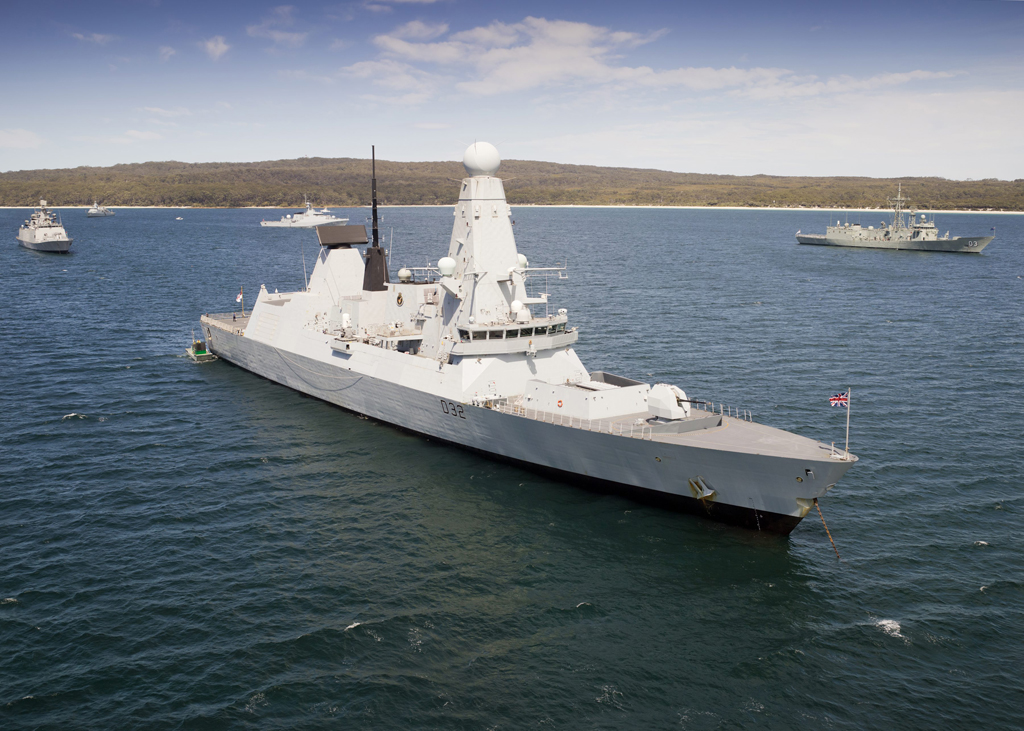 Gremyashchiy is impressive. Gremyashchiy and Gorshkov are the only warships in the Russian navy that goes toe to toe with Type 052D and Type 055 destroyers in terms of technology.

New corvette "Aldar Tsydenzhapov" will be left in Vladivostok
Today, 15: 13

The newest corvette of the project 20380 "Hero of the Russian Federation Aldar Tsydenzhapov" will continue to serve in the Primorskaya flotilla The Pacific Fleet, the corresponding decision was made by the command of the Russian fleet. Reported by "News" with reference to a source in the military.


The naval command decided to leave the corvette "Aldar Tsydenzhapov" as part of the Primorskaya flotilla of the Pacific Fleet, it will be part of the 165th brigade based in Vladivostok. Initially, it was reported that the ship will go to serve in Kamchatka.

As stated in the Navy, in this way it was decided to strengthen the country's southeastern borders and the naval presence in the Pacific Ocean. The Primorsky Flotilla is actively involved in supporting Russia's foreign policy in the Asia-Pacific region.

An interesting comparison (at least proportion wise) from Balancer:

Proportion how? The type-45 destroyer is a 152 meters long and 8.000 ton heavy vessel. The Steregushchiy is a 104 meter, ~2000 ton corvette.
No way those pictures are taken from the same distance.
Its like comparing a Oliver Hazard Perry frigate with a Ticonderoga cruiser.

walle83 wrote:Proportion how? The type-45 destroyer is a 152 meters long and 8.000 ton heavy vessel. The Steregushchiy is a 104 meter, ~2000 ton corvette.
No way those pictures are taken from the same distance.
Its like comparing a Oliver Hazard Perry frigate with a Ticonderoga cruiser.

You don't seem to understand the concept of proportionality. Its about relative dimensions, not absolute terms.

IMHO the comparison is entirely appropriate.

Like trying to compare a horse with a dog to look at how they run or move but ignoring the obvious size and weight differences...
Sponsored content