It will take 7 more years for this? That's longer than a Yasin subarine.

They are making two together, and at 40K ton they are probably a little bigger and more complex than any Sub.

They will likely also have to develop landing ships, and perhaps they might need to coordinate its development with new high speed troop carrying helicopters.

Equally a new troop transport helicopter would be good... an improved Ka-29 with a rear ramp door as well as side doors for rapid troop deployment and recovery, with a pusher engine to boost flight speeds would be interesting.


Russia's shipyards have not been modernized post Cold War to be able to build a LHD at such speed.

Actually most of their shipyards have been upgraded specifically for the purpose of making new ships. Hopefully their production of Corvettes and Frigates will accelerate including the numbers of shipyards making ships because after a couple of years of making corvettes and frigates they are going to have to start laying down destroyers and get them moving forward too.

You can consider yourself warned.

I don't interpret the rules on member abuse the same when that member indulges in flame baiting and trolling.

That's when they will be given really important stuff to build

To be fair these ships should already have a design... they just need to construct them, which is no simple task, the number of steps that need to be performed in the correct order is mind blowing, but this is what they do.

In all fairness Russia is going to have delays with the ships, they alllllllllways have delays and that's a fact you cannot argue.

History speaks for itself there.

However, suggesting 20 or 40 years is just flat out retarded.
limb

Isnt an amphibious assault ship a lot less complex than an SSN or even gorhskov frigate. Like lets think like this: No need for complex stealth coatings, testing VLS cells, testing sonar, testing depth resistance. Much simpler sensor suite since theres only a need for aircraft control and fire control of self defence weapons. The only complex engineering challenges are probably seaworthiness, cargo holds and hangars for helicopters and their supplies.

limb wrote:Isnt an amphibious assault ship a lot less complex than an SSN or even gorhskov frigate...

There is probably 25 to 30K tons of steel to start with... these ships are not just helicopter carriers... they are intended to carry 1,000 naval infantry plus their armoured vehicles and support vehicles and landing craft to take them from the ship to shore as well as more than a dozen helicopters of a range of different types.

The ship is essentially an enlarged Mistral and will likely have a modern 200 bed hospital included in its design as well as lodgings and food storage and preparation for 1,000 soldiers in addition to the crew and air compliment, and it is by far the biggest one they have ever made... the original Ivan Rogov class was about 15K ton, so these are almost three times bigger.

In comparison they have plenty of experience making SSNs and SSGNs...
George1 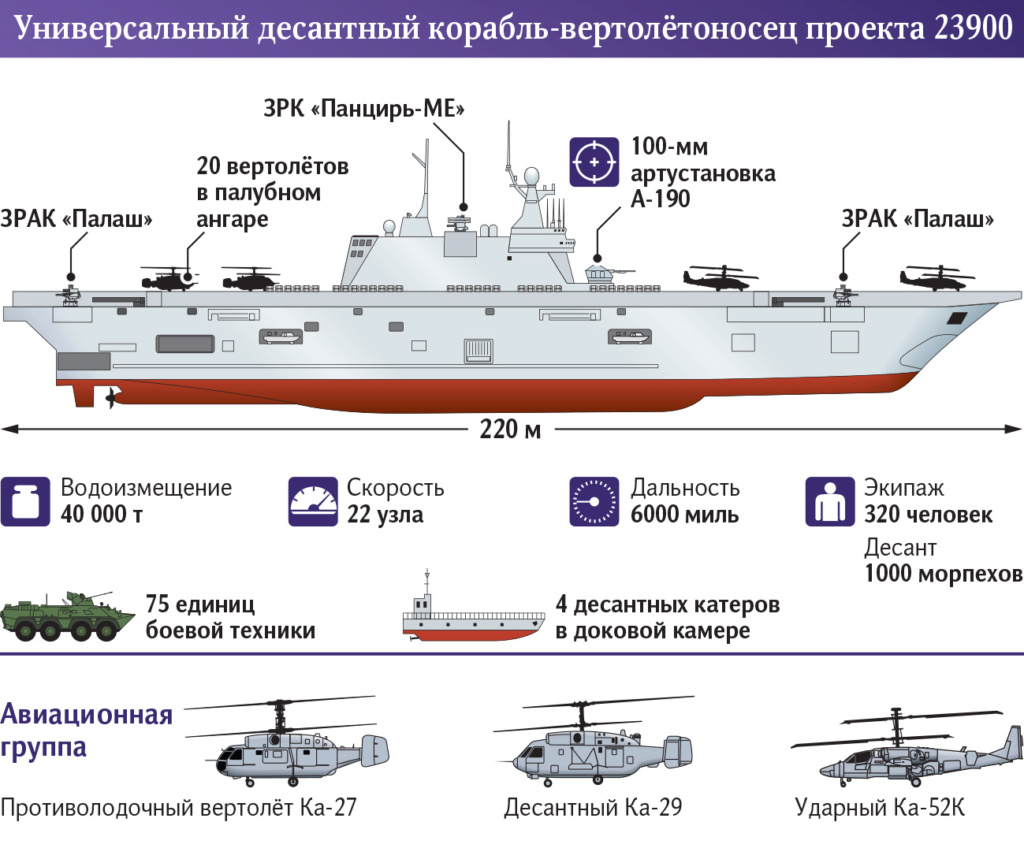 The graphic used there is the 15 000t Priboy design, or more likely the 24 000t Lavina. Both these had bow doors.
The bow shape is also very different to the 2 pictures we have shown with Putin
The 23900, as described, seems not to have bow doors, and will weigh around 40 000t max. It has a blunter, less sharp bow according to the 2 graphics seen.
One other thing: A length of 220m is not really compatible with 40 000t. If one looks at the other helicopter carriers, or full-decked assault ships, or even carriers, then with a 40 000t full displacement, one would expect a length over 230m at the very least, but more likely around 240-250m.
So either the hull is a novel design, being very wide, or the length or displacement is wrong.
I guess time will reveal all 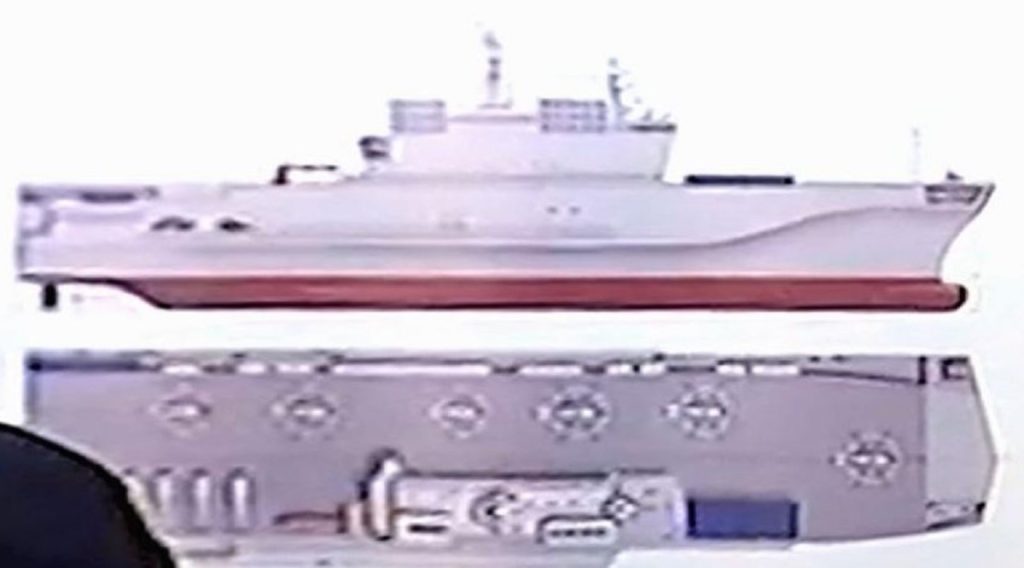 I see that it is also planned to operate a small number (4) Okhotnik-B drones on these ships for strike and target designation missions.

Naturally other types would be used as well.
mnztr

Mir wrote:I see that it is also planned to operate a small number (4) Okhotnik-B drones on these ships for strike and target designation missions.

Naturally other types would be used as well.

I predicted this would be the case but they would need some sort of catapult and retreival system for okhotnik no? Its a small jet aircraft after all.

Yes it would be interesting to see the end result of this ship and how they resolve issues like that.
GarryB

The report I saw suggested of the two being built one carries 1,000 naval infantry troops plus armoured vehicles and support helicopters as well as landing ships and hovercraft to land them ashore while the second ship will have more helicopters but instead of the troops and armour will carry drones and presumably act as a hospital ship and a full compliment of helicopters.

If they are successful they will build two more so a total of four ships with two of each version.

If they decide on a second version it might just end up being a little bit like the so-called Mercury mini carrier that was never build. 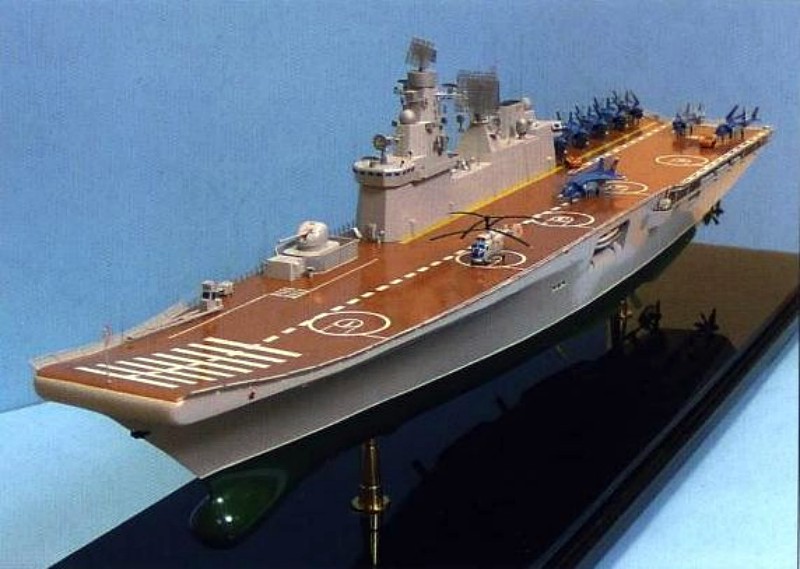 That is interesting... obviously get rid of the useless VSTOL fighters, but that 130mm gun mounted in front of the island is interesting because on the image of a ship supposed to represent the new ships there is a large blue rectangle located there.

Is that a modular position?

I assumed it is a Redut launch bin for large numbers of SAMs... likely many short range CIWS missiles like the 9M100 we know is compatible with the land based equivalent S-350 that can be carried four missiles to a launch tube.

On some other similar drawings there are blue rectangles in each corner of the ship and one large one in front of the island.

The gun mount below takes up rather less area than the blue area shown but the below deck area for missiles would need to be big for UKSK-M launchers to be an option so a gun mount with a huge volume of ready to fire rounds could fit fairly easily, while the four blue areas in each corner of the ship can carry Redut launchers with enormous numbers of self defence missiles... and no doubt Pantsir systems will be fitted too and maybe deck mounted TOR missiles.
Mir

Unfortunately there is virtually no info on the "Mercury" project but a few photographs of the model, but I would expect many modular features yes as the design is quite modern.

The basic layout is fairly close to the new Ivan Rogov and the overall design seems to be optimized for something like amphibious support. It should be able to "convert" into a ASW carrier quite easily.

It's unlikely that it shares any relevant features whatsoever with Rogov, too obsolete and too much time has passed
Big_Gazza

Never heard of the "Mercury" mini-carrier. Anyone know the Project #?
Mir

PapaDragon wrote:
Judging from aircraft selection Mercury was from the "happy days" and I don't think it was anything more than desperate concept art

It's unlikely that it shares any relevant features whatsoever with Rogov, too obsolete and too much time has passed

Yes clearly from the little red flag it is something from the Soviet era. The yak-41 is represented on the ship which means it's possibly a relatively late Soviet era project and likely died an early death due to the financial crisis.
It is an actual model and not just a graphic presentation. The ship was very briefly mentioned recently on Balancer - that's why it came to mind when Gary mentioned that there is a possibility of two different versions of the new Rogov.
If a more "air" orientated version of the Rogov was ever build I am sure it could look something like that with a ski jump and all, but yes the design has nothing to do with the Rogov esp considering that the first picture I posted has been on my PC since 2010!

This one is a catamaran model of the same mini carrier concept known as "Delfin". 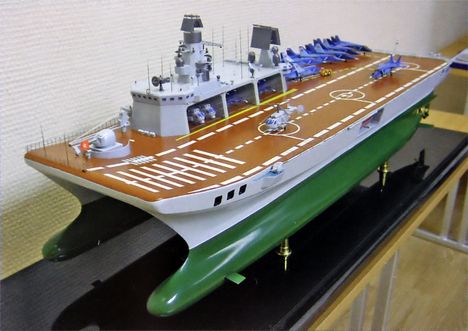 Yeah, none of this was even remotely serious
Mir

Yes countless many more projects have never seen the light of day - esp towards the end of the Soviet era and the Yeltsin years. But clearly the concept was worked on.

For instance there were quite a number of cruiser concepts - but none materialized. Something like the Project 2145 sort of morphed into the Lider and that is not even a real project atm and may never materialize. 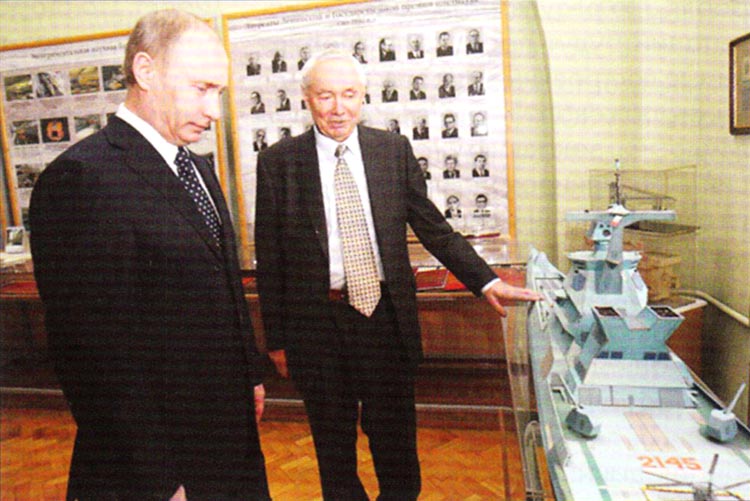 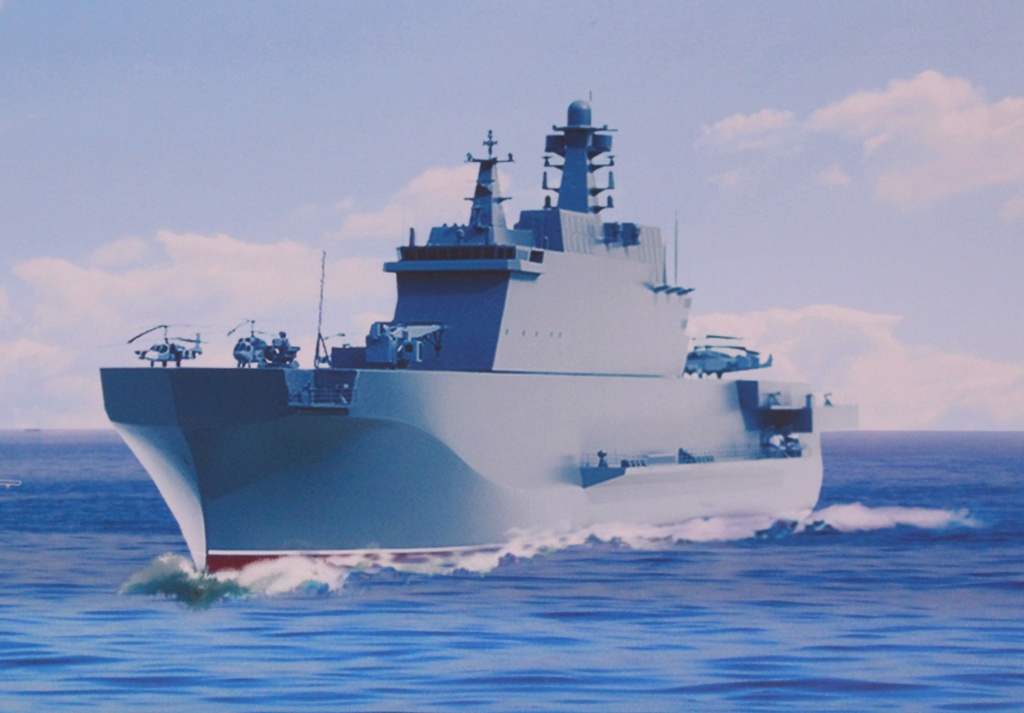 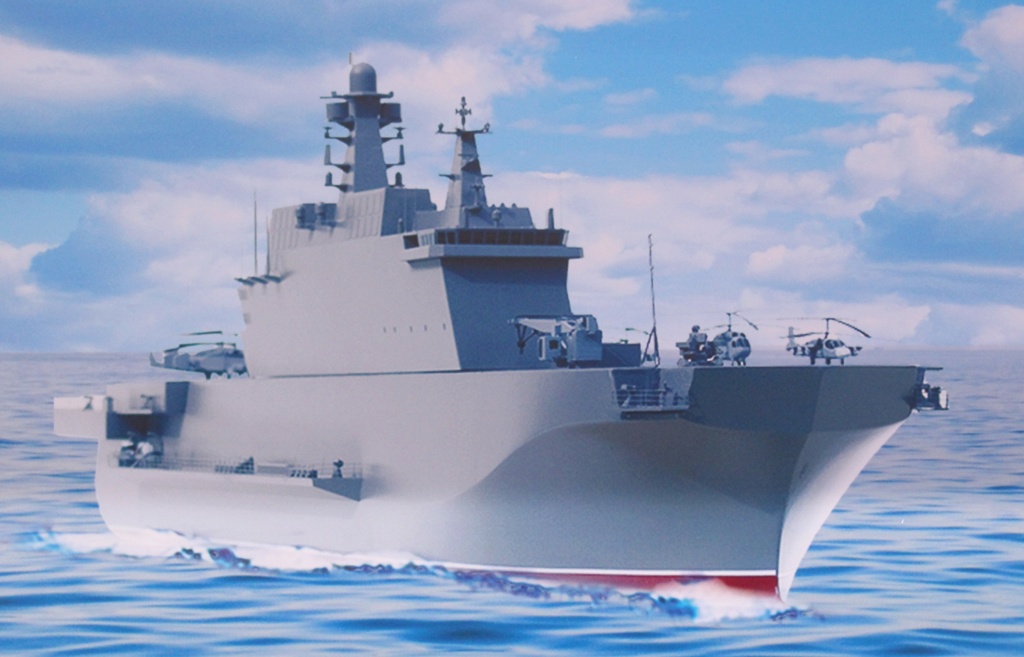 It has a massive island. What gives? Bad artist?
PapaDragon

mnztr wrote:It has a massive island. What gives? Bad artist?

More like no artist, this image is complete nonsense and if it even remotely resembles the final product they f*cked up royally

A big island is not a problem on a helicopter carrier... during a real landing half the deck would likely have storage crates and equipment on it, while the remaining half of the deck is used for takeoff and landing stuff.
Russian_Patriot_

Helicopter carriers under construction in Crimea may be equipped with attack drones.

The first Russian multi-purpose amphibious assault ships (UDC) under construction in Crimea can be equipped with the company's unmanned attack helicopters."Kronshtadt", said in an interview with RIA Novosti General Director of the company "Kronshtadt" Sergey Bogatikov on the eve of the forum "Army-2021".

At the company's factory in Dubna will produce unmanned helicopters developed by NPP Strela, which was acquired by Kronshtadt. As Bogatikov noted, "they will also be able to carry weapons and perform shock functions."
The head of "Kronstadt" added that if onceIf Russia is engaged in aircraft carriers, then first of all it is necessary to focus on unmanned aircraft.