There is a downside Vann to the Russian bomb/diplomacy, terrorist force multiplication.

By moving all the various terrorists groups in the west of Syria up into Idlib they turned isolated terrorists in their 100s or 1000s into a major army in its 10000s. OK I accept that putting them all in one place may make them easier to hit but that one place is hundreds of sq miles. Plus their human shield has been increased at the same time. They, like the SAA, have now had plenty of time to train, re-equip (looks at the uniforms now in most of the photos as a simple example), integrate their new arrivals, work out a strategy based on past SAA activity, establish defensive lines etc. We know they can be tough opponents when dug in and they certainly are now.

IMHO the Syrian Government is going to have to break their resolve somehow, perhaps with the RuAF totally flattening a key village/town with a couple of the largest possible bombs making the point that many of them will not die 'honourably' fighting facing the enemy, they will just die, crushed or vapourised. I don't know.

The upcoming Battle of Idlib will be one for the history books and will make the fight for Aleppo look like a playground fight.
higurashihougi

A number of rebels in Northwestern region are proxy groups supported by Turkey. I think a successful negotiation with Ankara may be important.

And the rebel groups are not that united, inter conflicts are occasional. May be SAA want to let them kill each other out a bit before deliver the final blow.
JohninMK

higurashihougi wrote:A number of rebels in Northwestern region are proxy groups supported by Turkey. I think a successful negotiation with Ankara may be important.

And the rebel groups are not that united, inter conflicts are occasional. May be SAA want to let them kill each other out a bit before deliver the final blow.

That may have been the case but with the latest HTS moves rolling them and their equipment up into the HTS grouping, without any fighting or apparent resistance, it doesn't look like it anymore. It is starting to look like an integrated terrorist force, with the ex-ISIS spiritual leader at the top. Any resistance or in fighting now looks over, might won.

The Turkish Army outposts now look unfortunately, rather than defensive positions for their local allies, like potential hostages in castles built on sand. Turkey now, following its failure under the Astana Agreement, has a bit of a problem with thousands of hard core terrorists who only have one escape route, over the Turkish border. Chickens coming home to roost springs to mind.
Isos

Turkey's expension is the problem of US and EU. If they let them grab lands in syria and kill defenceless kurds without stoping them then its their fault and they are accomplice.

That's why you see russians smiling so much after meeting turkish officials.
JohninMK

The NLF has reportedly surrendered to HTS and the Syrian Salvation Government in the "entire north." Awaiting confirmation

HTS have now entered Al Tah in southern Idlib countryside, and arrested pro-NLF soldiers who fired upon them.

Turkish armoured vehicles, which were dispatched from Hatay to support the units at the Syrian's Idlib border, are seen as they receive training by Turkish Armed Forces, in Hatay, Turkey on January 12, 2019. My take from this is that 1000 NFL operatives have surrendered their heavy weapons to HTS and are able move to Afrin in return.

Read any of that stuff last week about hundreds of US Marines moving quickly into Syria to 'protect' the outgoing US forces. Only one problem, look where they are!


The Kearsarge ARG is currently in Piraeus, Greece.

More than 4,500 sailors and Marines with the Kearsarge ARG and embarked 22nd MEU departed the East Coast on Dec. 17. The ARG is currently in the Mediterranean Sea for a deployment that will include operations in the European Theater and, likely, in the Middle East.

The ARG is led by USS Kearsarge (LHD-3) and includes Norfolk-based USS Arlington (LPD-24) and Mayport, Fla.,-based USS Fort McHenry (LSD-43), according to the Navy.

On Jan. 6, Fort McHenry and elements of the 22nd MEU entered the Black Sea, according to to U.S. 6th Fleet.

The ARG is also embarked with Fleet Surgical Teams 2 and 8, Helicopter Sea Combat Squadron 26, Tactical Air Control Squadron 21, and Naval Beach Group 2, according to the Navy. 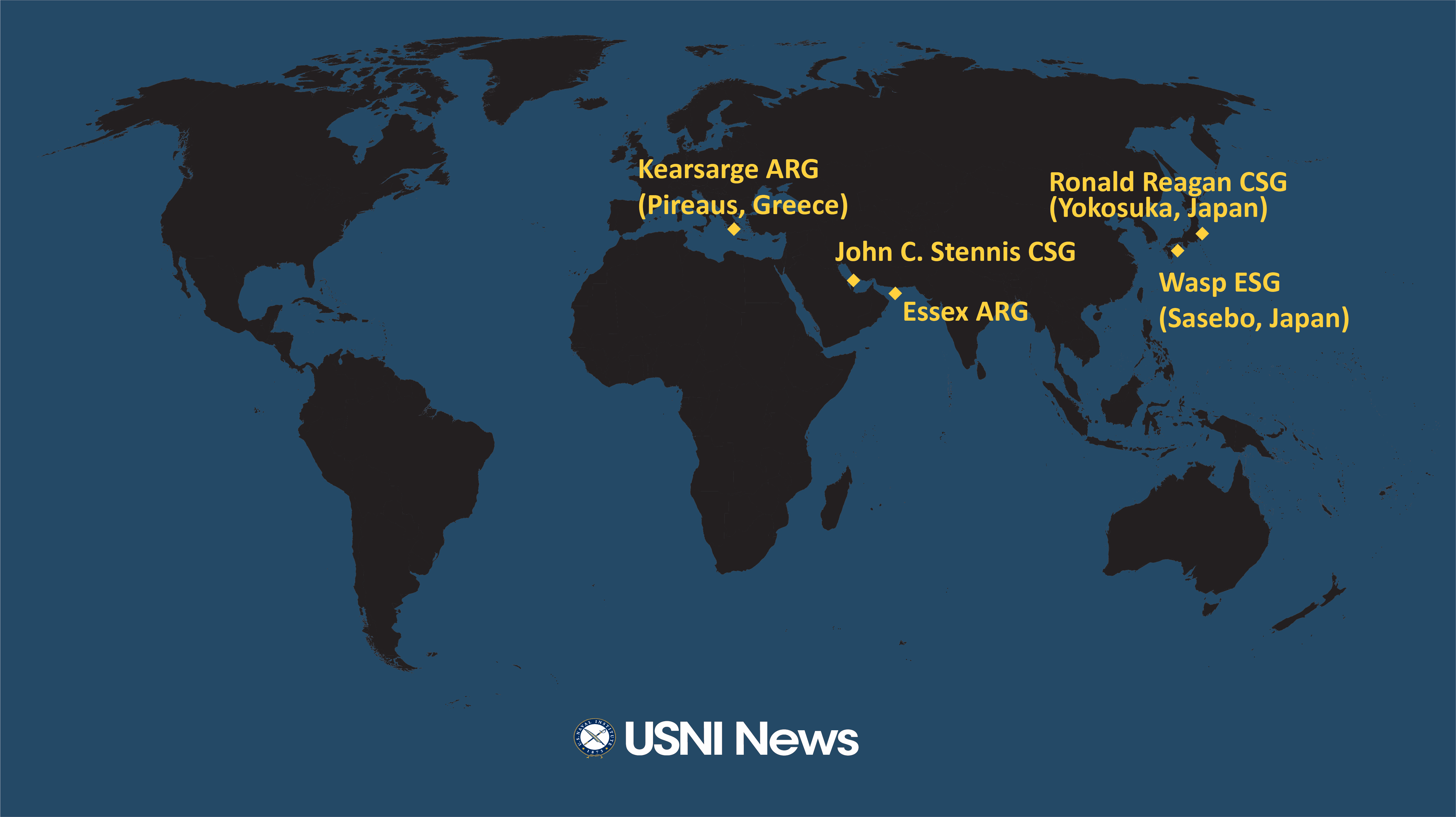 Latakia this morning. Making an effort with slat armour.

If they want to contain in the same time Russia, China, Iran and north Korea with their 20 carriers of all sorts then they are more stupid than we thought here.
nomadski

Concentrating them in one area was right move . For reason of forcing a regular battle , where they have to form a line and wear uniform and where they can be vaporised in a regular manner . Using conventional weapons . But the other reason was political . Their collection and coalescence . Would enable the majority to voice opinion . And form political direction . Something they could be judged on . Either for peace . Or for war . Here opportunity must be provided for political process . And I think this may be possible . Since they are surrounded . Not growing in numbers . And their rat masters are abandoning ship .

Perhaps if all different nations gave the yanks a little budge simultaneously . Then the yanks will realise they are over extended . And retreat . And build a tall wall around their nation . That could be seen from space ! Like the great wall of China ! They then become civilized !
JohninMK

Interesting 'team' now sadly dead before they could be pulled out.

.@ajc identifies Ghadir Taher, 27, who immigrated with her family to America from Syria, as contractor who was among those killed in bombing.

Shannon Kent was a wife, a mother to two young boys, a cancer survivor, a world traveler and a "badass woman" who knew seven languages, deployed multiple times and lobbied on Capitol Hill for new protections for servicemembers.

Pentagon IDs the casualties from Wednesday's attack in Manbij, Syria, including the first American servicewoman killed by enemy hostilities, Chief Petty Officer Shannon Kent, who was assigned to the Navy's spook command at Fort Meade and was involved in "sensitive assignments."

#Syria #DeirEzZor
Reports about the exit of the families of ISIS fighters from the villages of Al Aarkoub, Al Sfafna, and Al Marashda. they gathered in Al Baghour so their deporting would start
JohninMK

The leaking of this means there is an agreement or it failed. Given the contents I suspect the latter.


The Hawar News Agency released a detailed report that highlighted all of the topics that are going to be discussed with the Syrian government.

According to the report, the following is the Syrian Democratic Council’s (SDF) roadmap to peace:

1.Unity of the Syrian land

2 The system in Syria is a democratic republic, and Autonomous Administration is part of this system.

4 Along with the Syrian flag, there should be flags representing Autonomous Administrations.

5. Diplomacy in the areas of Autonomous Administrations does not go contrary to the interests of the Syrian people and constitution.

6 Syrian Democratic Forces are part of the Syrian army, which is responsible for protecting the Syrian border.

7. The Internal Security Forces in the areas of Autonomous Administration operate according to the local councils in a manner that does not contradict with the Syrian constitution.

8. Learning in the mother tongue is the basis of education in the areas of Autonomous Administration, and Arabic is the official language throughout Syria.

9. In Autonomous Administration areas, education in local languages is taught in faculties of history, culture, languages, literature and the like.

10. Distributing the Syrian wealth to the Syrian regions in a fair manner.

Earlier this week, Al-Masdar reported that the Syrian Kurds and Damascus have restarted peace talks in order to achieve a peaceful settlement before the Turkish regime attempts to implement their safe zone.

Finally the Kurds see the light..
Their dream of a kurdistan is over.. and it was also NEVER going to work..
For a Kurdistant to work ,you need NATO permanently deployed in Syria and then antagonize Turkey..
Which is far more important for NATO than the kurds.. and to "liberate" the zones of Kurds inside Turkey
and inside Iran will be impossible .. because kurds will had need permanent help of NATO to fight turkey and IRAN..
landlocked countries like Kurdistan or Chechenia have no chance ever to become truly indepedent ever . for being encircled by other nations.
Mindstorm

there is a new wave after that.. Israel seems got buthurt , that they failed the previous attack ,
and so launched several hours later another much bigger attack ,apparently of 3-4 waves..
crod

From reports on different news sites, it was a huge attack.

What got hit? I wonder how much is actually getting through via Iran, the israeli’s sure are pretty active - a day time attack too and admitting to the attacks now. Becoming confident indeed.

Any pics of damage or destroyed targets?
Isos

Anyone remember these recent news:

Israel huffed and puffed but did nothing.
Iran kept quiet but also kept doing what he was told not to.

And that's how we got here.

Israel did tell SAA to stay out of it (definitely on Russia's insistence) but they didn't. Hence Pantsir roasted (and another improper use of AA assets by SAA as always...)
miketheterrible

The Pantsir hit was being attacked via a saturation attack. Over 50 missiles from Israel fired while Syria intercepted roughly 37. 4 Syrians killed and 11 injured with some damage at airport.

While Pantsir and what not are great, all AD systems can be saturated.
higurashihougi

After years of bombing and what Israel got are:

Hizbollah still there and consolidates their position.

Iran continues to increase their influence in the region.

Supply from Iran for Hizbollah is not stopped.

At the end of the day Bibi's best achievements is jerking off the whole Isarel country.
Hannibal Barca

Still not a single jewish airplane isn't destroyed. Iran has yet to receive any modern weaponry. The one month Trump promised has passed and his terrorists are alive and still in Syria.
Ukraine is lost, Balkans are lost and follows Armenia and next Belarus. Things in life either come soon or never. From Barbarossa to Stalingrad took only 18 months.
Sponsored content