Ukraine’s Altcom Financial-Industrial Group is completing the construction of a railway bridge over Amudarya River with a length of 1,750 meters, Neutral Turkmenistan newspaper reported.

This is the most grandiose engineering structure in Turkmenistan’s Lebap region, according to the newspaper. The report also says that cars will transport freight and passengers via this transportation corridor in the near future.

Altcom Group said in early June that the cost of the project’s contract is estimated at $169 million.

It is envisaged that thanks to the use of high-strength construction, the railway bridge between Turkmenabat and Farab will be able to withstand the weight of the superheavy cargo trains.

Oh dear me, look who is top of the list of work time needed to by an I-Phone 6

JohninMK wrote:Oh dear me, look who is top of the list of work time needed to by an I-Phone 6

With or without a subsidised contract?
d_taddei2

So what will he do then ?

Apparently already in the US.
d_taddei2

Tass article states they (Ukrainians) are ready to extradite him to Georgia.

Shame I was hoping he would be in court. Usa will probably protect him.

I hope he doesn't get it

Lithuania's member of the European Parliament Petras Austrevicius on Friday proposed to consider the possibility to provide former Georgian president and ex-Governor of Ukraine's Odessa region Mikheil Saakashvili with the citizenship of the Baltic nation.
https://sputniknews.com/europe/201707281055953441-lithuania-citizenship-saakashvili/

He's an idiot Ukraine has many citizens and he thinks 100,000 of his so called followers can manage a coup and succeed with a non ukrainian national how idiotic and he has just told everyone his plan and how many locations of his so called oganisation he has. The thing about a coup is that it's a surprise and catches the person off guard maybe someone should tell this creature that. Seems to me that he just bends over opens his ass and let's his belly rumble complete nonsense

Hungarians of Transcarpathia refused Ukraine her future
Kiev commits the same mistakes that led to war in Donbass. Their paranoia is incompatible with multi ethnic state. Turkey has done similar things with her Kurds & now they got knee deep in Syria as a result. 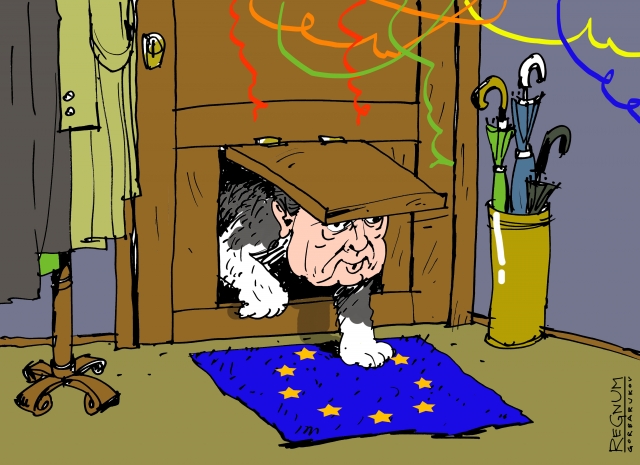 Romanians want to take the East Moldavian Diocese from the Ukrainian Church of the Kiev Patriarchate
The "other shoe" didn't take long "to drop"!

"The Council of the Za Zhittya Opposition Platform has unanimously nominated Yuri Boiko as candidate for Ukrainian president, the Ukrainian Choice said on its website.

"We have undertaken responsibility to act in the interests of the nation and the country. This is what the current authorities are lacking," Medvedchuk added.

According to Medvedchuk, at the presidential and parliamentary polls, the political force will represent the interests of people living in southeastern Ukraine, Russian-speakers and "all those who understand the necessity of cardinal changes in the policy of the current authorities."

"It will ensure peace for our country, economic revival and worthy life for tens of millions of Ukrainians," he stressed. "With strategic tasks worded, we have moved beyond words to action and proved that there is no room for ambitions and political egoism once saving of the nation from tariff genocide, debt bondage and the robber nationalism policy is at stake," he stressed.

The Opposition Bloc and Za Zhittya political parties on November 9 signed an agreement on the consolidation into a unified Za Zhittya Opposition Platform to take part in elections in Ukraine in 2019.

It has to be Ukraine. A comedian in front in Presidential poll. Poroshenko not doing too badly. 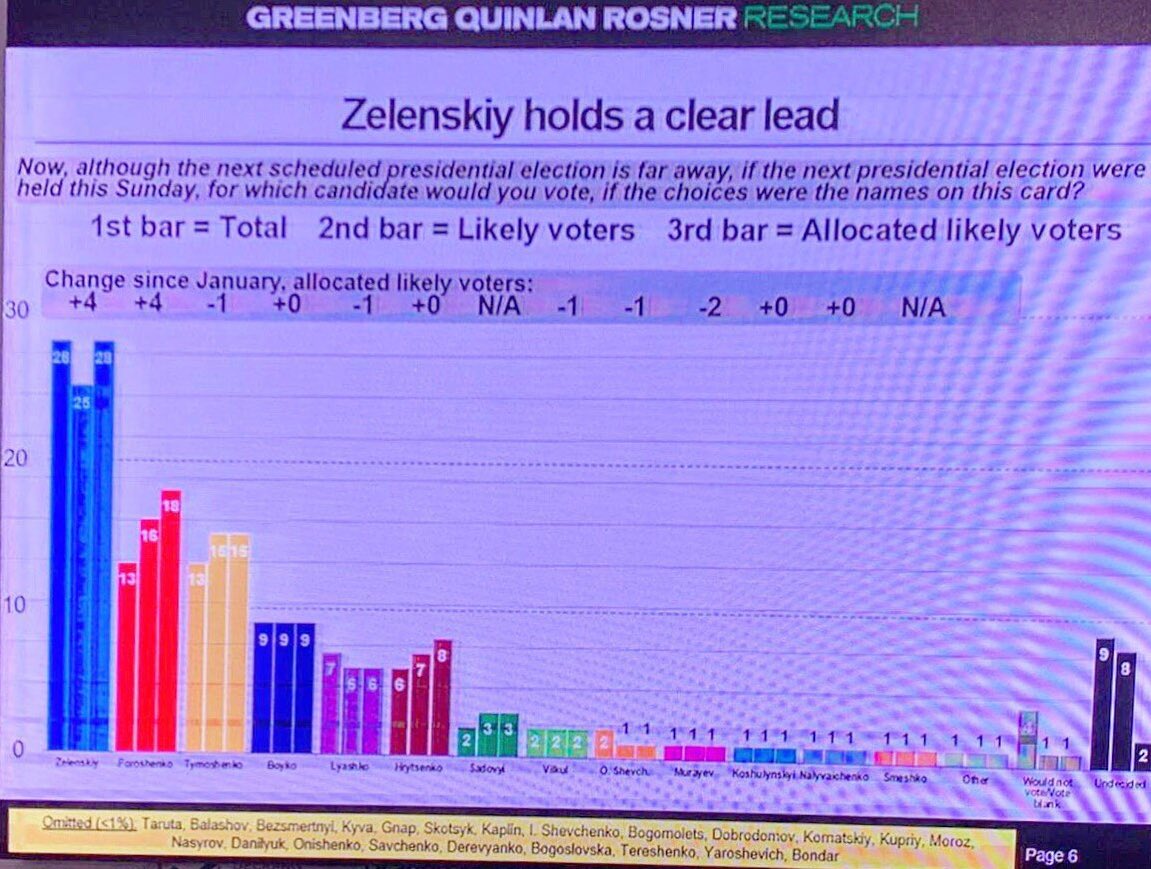 With 61.35% of the vote counted, Zelensky leads the race, winning 30.39% of the vote. Incumbent President Pyotr Poroshenko comes in second with 16.37%. The runoff election is scheduled for April 21.

He's a comedian, but with a law degree:
https://file.liga.net/persons/vladimir-zelenskii

his puppet master is kolomoyski if I'm not wrong.

Similar thing as what is happening currently in Georgia. The real master is Ivanishvili, and the president (the French ambassador turned georgian politician) is just an actor who plays a role  (knowingly or not).

However in ukraine case, having a real actor is quite funny

So no real change then...
kvs

GarryB wrote:So no real change then...

There is talk of Poroshenko actually winning the second round. What a rigged farce!
miketheterrible

his puppet master is kolomoyski if I'm not wrong.

Similar thing as what is happening currently in Georgia. The real master is Ivanishvili, and the president  (the French ambassador turned georgian politician) is just an actor who plays a role  (knowingly or not).

However in ukraine case, having a real actor is quite funny

You are very correct. This zelensky guy is a puppet for an Oligarch and he still pushes for regime change in Russia.
Tsavo Lion

The main thing is that Y. Timoshenko is eliminated from the race & these elections r made to appear as an expression of democracy.

Looks to me like no matter what the result there is unlikely to be honest negotiations with Russia or the seperatist regions, so we wait for another 5 years.

Will the Ukraine remain a country that long... certainly another 5 years of Poro will put them off the EU and the west for good... not really sure how, but it will be Putins fault.

KIEV, April 3. /TASS/. The Ukrainian government has banned unscheduled flights to Russia in the wake of a visit to Moscow by presidential candidate Yuri Boiko and Chairman of the Political Council of the ‘Opposition Platform - For Life’ party Viktor Medvedchuk. The move was initiated by the Ukrainian Interior Ministry.

Interior Minister Arsen Avakov claimed that the two opposition members "used a loophole in Ukraine’s legislation" to take a direct flight to Moscow. He added that the Interior Ministry had initiated amendments to the legislation concerning the use of the country’s air space in order to "make unscheduled flights between Ukraine and the aggressor country impossible."

Avakov also said that the ban would not apply to potential flights arranged for international organizations such as the Organization for Security and Cooperation in Europe (OSCE), the United Nations and the International Committee of the Red Cross (ICRC).

Ukrainian Prime Minister Vladimir Groisman, in turn, said that he "would allow these politicians to travel by an An-2 biplane aircraft provided it is a one-way trip." "It must be clear to everyone that no one has the right to humiliate the state of Ukraine," he added.

Members of the ‘Opposition Platform - For Life’ party Yuri Boiko and Viktor Medvedchuk made a visit to Moscow on March 22, departing from Kiev’s Zhuliany airport. The two politicians were received by Russian Prime Minister Dmitry Medvedev. The parties discussed ways to restore trade and economic ties, the gas issue and the possibilities to establish a joint gas transportation consortium. The meeting also involved CEO of Russia’s Gazprom Alexey Miller.

Ukrainian Prosecutor General Yuri Lutsenko said later that a criminal investigation would be opened into Boiko and Medvedchuk over illegal border crossing, while Prime Minister Vladimir Groisman and Interior Minister Arsen Avakov pointed to the need to conduct a probe in that regard. At the same time, Ukrainian State Border Service Spokesman Oleg Slobodyan said the Service did not have any reason to prevent Boiko and Medvedchuk from crossing the border.

There has been no air transport service between Russia and Ukraine for the past three and a half years. Tensions first rose when Kiev demanded that Moscow pay fines for the allegedly illegal flights of Russian air carriers to Crimea, which had reunited with Russia in March 2014. In September 2015, Ukraine imposed sanctions on more than 20 Russian air companies. According to then Ukrainian Prime Minister Arseny Yatsenyuk, flights to Crimea, which allegedly violated Ukraine’s air space, were the reason behind the move.

As a result, Russia had to take retaliatory steps against Ukrainian air carriers. A few days later, Yatsenyuk made a statement saying that Russian air companies would be banned from operating flights to Ukraine if they "carry military and dual-use goods or Russian troops." A total ban on regular flights to Russia was announced on October 25, 2015.


The Central Election Commission in Ukraine has already processed 89.41% of protocols of from precinct election commissions on the results of the voting in the second round of the presidential elections. Volodymyr Zelensky received 73.19% of the votes (12,160,694) while his opponent, incumbent head of state Petro Poroshenko, saw support of 24.48% (4,068,156).

The nationalists in many forum/discussion boards are not very happy about this.

The next few weeks will be interesting. Kolomoisky holds a grudge against his old pal Poroshenko and quite likely certain people in Washington, as it was primarily due to their decisions that he lost his bank. Though it remains to be seen how he will act, as money is his primary motivation.
MiamiMachineShop

Kolomoisky (Israel) must improve relations with Russia after many incidents. Basically 29 meetings in Kremlin are not for dinner and movies only. The topic of what Israel can do for Russia is discussed in exchange for freedom of Israeli action in Syria. Kolomoisky (Israel) will show concessions to Russia this way. Basically the Nazis are in trouble. Kolomoisky had several groups loyal to him but they were folded into other groups controlled by Avakov and Poroshenko. He will have his revenge by increasing Russian representation in the Rada, and basically fragmenting the country into federalized structure. Kiev will lose power. The eastern regions will be granted autonomy. There will be probably increased fighting. But Kolomoisky (Israel) will not stand in between Russia and the Nazis.

Western look at new appointments in the power block of Ukraine

According to the Intelligene online newsletter in the article “Zelensky renforce son emprise sur le renseignement de Kiev”, with the appointment of the head of the Foreign Intelligence Service of Ukraine on September 20, 2019, the new President of Ukraine Volodymyr Zelensky continued the policy of placing his people in law enforcement agencies. The impetus was given after the parliamentary elections, new appointments are aimed at removing clans from the Ukrainian special services that do not obey Zelensky.

So, the new head of the Foreign Intelligence Service (SVR) of Ukraine Valery Evdokimov replaced Vladislav Bukharev, who was "removed" from the post of Security Service of Ukraine. Bukharev was a veteran of Ukrainian intelligence and is considered close to Yulia Tymoshenko, thanks to which he went to the Verkhovna Rada on her party list. Tymoshenko’s supporters maintain a special relationship with the sponsor of the current president of Ukraine, oligarch Igor Kolomoisky.

At the end of August Zelensky appointed his childhood friend Ivan Bakanov as the head of the Security Service of Ukraine (SBU), before Bakanov headed the Anti-Corruption Department. For a long time, Bakanov was with Zelensky in the Studio Quarter-95 company, which controlled the channels belonging to Kolomoisky.

The new head of the SVR of Ukraine Valery Evdokimov spent most of his career at the State Border Service of Ukraine, and since June 2019 he became deputy director of the SVR of Ukraine. Similarly to the presidential administration, he will maintain relations with the main partner of the SVR - the American CIA. However, these relations have been heavily politicized in recent weeks - Ukraine has become a hostage to the war between US President Donald Trump and the Democratic majority in the US Congress.