Members of the Georgian opposition are demanding that President Mikhail Saakashvili should face a war crimes trial at The Hague.

Georgia’s Labour Party has said Mikhail Saakashvili should be held responsible for the war in South Ossetia that led to many civilian deaths.

The Georgian opposition’s move follows the release of a report commissioned by the European Union which found that Georgia started last year’s war in South Ossetia.

The EU report said that hostilities began with Georgia’s artillery attack on the capital, Tskhinval, which was not justified under international law.

The Georgian onslaught and large-scale military conflict lasted five days, until Georgian forces were driven out

“The commission accused Saakashvili of war crimes. Namely, of unleashing active hostilities, of a massive, wide-scale military operation in the South Ossetian capital, Tskhinval and the use of prohibited types of weapons,” said Ms Nestan Kirtadze, international secretary of Georgia’s Labour Party, addressing a news conference in the Georgian capital Tbilisi.

She further said that Mr Saakashvili oversaw the shelling and destruction of non military facilities, and of attacking military personnel from the peacekeeping mission that was mandated by the United Nations.

Georgia joined the Rome Statute, the treaty that established the Hague-based International Criminal Court, in 2003 and is therefore under its jurisdiction. “The Labour Party plans to ask Brussels and Washington to start an investigation immediately,’’ she said. (Agencies)

"Former Georgian Prime Minister Vano Merabisvhili has been implicated in a new scandal. New footage has been posted on the internet showing him apparently ordering the killing of two people during the alleged Mukhrovani military mutiny in 2009."

Hmmm, the plot thickens. We'll see what information will come from this.
Werewolf

One genocider goes another is already in the row following.
US Foreign Policy, installing puppets and Dictators everywhere.
magnumcromagnon

I'm surprised not more people are talking about this, if the allegations are true than this puts a final stake in the heart of the vampire called "the Rose democratic revolution", the only thing crimson colored on this rose is the blood of South Ossetians.
sepheronx

Werewolf wrote:One genocider goes another is already in the row following.
US Foreign Policy, installing puppets and Dictators everywhere.

What I am surprised, is the amount of people who still believe that puppets are all innocent when thrown in by the west. I guess many people just like to ignore the story of General Pinochet.
flamming_python

Werewolf wrote:One genocider goes another is already in the row following.
US Foreign Policy, installing puppets and Dictators everywhere.

What I am surprised, is the amount of people who still believe that puppets are all innocent when thrown in by the west.  I guess many people just like to ignore the story of General Pinochet.

Ignore is too mild a word - in fact he's turned into an idol for anti-Russians in Eastern Europe.
Regular

It's good to see that Georgians are cleaning up. Still more to go.
mutantsushi

Apparently the Parliament has now impeached the President, actually not following procedure of first submitting specific crimes to Supreme Court, but they at least fulfilled the super-majority requirement unlike in Kiev. It seems the President is accepting this, although he may run in the next election?
TheGeorgian

Note how the journalist pressures him to condemn Russia as an agressor.

What a c*nt she is. Truelly journalism is dead, the only journalists who exist are those who can survive by donations with their work and not Mainstream Bullsh*ters.
George1

“The court has ordered the pre-trial detention of [Saakashvili] and he has an obligation to face the trial. And all the measures prescribed by the law, including international ones, can be used to make this person appear before the court,” Tsulukiani stressed, adding that such legal frameworks can be applied to any defendant, not only Saakashvili.

“Mikheil Saakashvili is an ordinary defendant,” the justice minister said.

The three were charged in absentia last week with abuse of power in connection with the crackdown on protesters in November 2007, the raid on Imedi TV and the acquisition of property.

Defense lawyers for the former politicians have already submitted a claim to the Tbilisi Appeals Court demanding a reversal of the decision.

Not quite new, but hasn't been posted here yet:
Georgia Seeks Interpol 'Red Notice' for Saakashvili
Saakashvili has apparently previously threatend the current gov in Tblisi with a "Maidan"... Good luck with that.

PM, President Chide Each Other

After Garibashvili said on August 15 that it took longer than needed for the President to declassify portion of spending records of former president Mikheil Saakashvili, Margvelashvili responded that he can deliberate on sensitive matters as long as the law allows him and no one, who has no relevant authority, can speed him up. President Margvelashvili declassified documents first requested by the Prosecutor’s Office on July 12 after the latter made the request public on August 8.

Margvelashvili also stressed that while deliberating on declassifying portion of ex-president’s spending records, he and his advisers “paid very careful attention on this issue”, because it is “not only an internal political matter for our country.”

“I hope that today it is clear for everyone that this issue has been linked to Georgia’s foreign policy,” Margvelashvili said, referring to bringing of criminal charges against Saakashvili.

Seven years after the Russian-Georgian conflict in Georgia is growing disillusionment with the West, and to revive the pro-Russian sentiments, writes columnist Die Welt Yulia Smirnova. Along with the hard economic situation, this is pushing them, and the devastating impact of the European norms in the traditional values ​​of the Georgian people, the author stresses.

According to Die Welt journalist Yulia Smirnova, a translation of which results in InoTV , seven years have passed since the Russian-Georgian conflict in which the West supported Georgia. However, in Georgia today are louder voices of "friends in Moscow." One of them is Gulbaat Rtskhiladze, director of the Institute of Eurasia. According to him, many Georgians have become successful in Russia, for example, former Prime Minister of Georgia Bidzina Ivanishvili and Joseph Dzhugashvili, "Stalin would have remained a shoemaker in Georgia and in Russia it has become a great personality."
Ukrainian crisis has caused concern in Georgia and other neighboring countries, but membership in NATO and the prospect of EU membership remains uncertain for it. Thus, the difficult economic situation and frustration in Europe forced an increasing number of Georgians to seek help from Russia. According to a recent poll by the National Democratic Institute, the number of Georgians support Georgia's accession to the Eurasian Union created by Russia, has never been greater - 31%. Continue reading.

31 % georgians support EAU . wow! But Georgia had signed and ratified the agreement with EU already .
whir

(Civil.Ge) — Race for majoritarian MP seats will go into second round in 51 out of total 73 single-mandate constituencies, where no candidate is garnering more than 50% of votes, according to early official results of the October 8 parliamentary elections.

GDDG ruling party said it is eyeing constitutional majority in the new Parliament by winning most of the runoffs.

The ruling party is already winning majority of 77 seats, which were up for grabs under the proportional, party-list nationwide vote.

But the final makeup of the 150-member Parliament in Georgia’s mixed electoral system will only be defined after the second round runoffs in the 51 single-member districts.

GDDG majoritarian MP candidates are winning outright victory without requiring second round in 22 districts, according to partial official results.

GDDG candidates will feature in all, but one, 51 runoffs; the ruling party had its candidates in 72 out of 73 single-mandate districts.

If GDDG wins at least 42 of those 50 runoffs, the ruling party will likely be on track to gaining constitutional majority of 113 seats in the new Parliament – something the party is far short of in the outgoing legislative body. The estimation is still tentative as it relies on partial election results.

“We are convinced that we will win all the second round runoffs in the single-mandate constituencies and the Georgian Dream will win constitutional majority in the Parliament,” ruling party’s executive secretary, Irakli Kobakhidze, said on October 9.

In most of the single-mandate constituencies, where the races were pushed into the second round, GDDG candidates will face contenders from the UNM opposition party, which has claimed that the vote was rigged and is now mulling over its future steps.

The race appears to be going into the second round in the district No.66 in Zugdidi municipality, where UNM MP candidate, Sandra Roelofs, Georgia’s ex-first lady, is in a close race with GDDG candidate Edisher Toloraia, who is leading by the margin of just 153 votes.

In the town of Gori, ex-defense minister Irakli Alasania, whose Free Democrats party is failing to clear 5% threshold in party-list vote to enter the parliament, is close to pushing the race for majoritarian MP into the second round against first-placed GDDG candidate, who has 33.5% of votes. Alasania has 461-vote lead over third-placed ex-defense minister Irakli Okruashvili.

Free Democrats majoritarian MP candidate also made it to the second round in Chiatura, where he will face the first-placed GDDG candidate.

In Khashuri, a candidate from Industrialists-Our Homeland election bloc won the first round with 32% of votes and will face the second-placed GDDG candidate, MP Valeri Gelashvili, in the runoff. 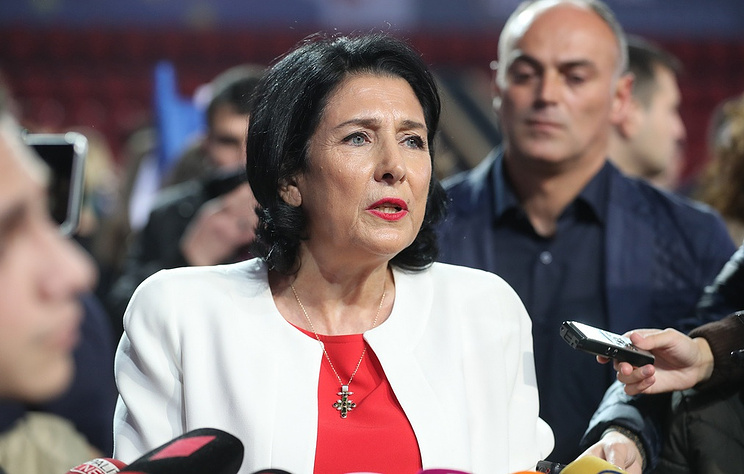 TBILISI, October 28. /TASS/. Salome Zurabishvili, an independent candidate, is winning Sunday’s presidential polls in Georgia, with 52.3% of votes, according to an exit poll conducted the Psychoproject company at an order from the ruling Georgian Dream party.

Zurabishvili is supported by Georgian Dream.

According to the poll results, Grigol Vashadze, a candidate from the former ruling party United National Movement and tem more organizations, is scoring 28.1% of the vote. Former parliament speaker (2008-2012) David Bakradze, who was nominated by the European Georgia party, is third with 9.2% of the vote.

The winner will be a candidate who secures more than half of the vote, and no minimum threshold for the voter turnout has been set. If no candidate gets the necessary amount of the vote, the second round will be held in November. Two candidates who receive the highest number of votes in the first round will take part. The preliminary results of the vote will be announced early on Monday.

TBILISI, June 20. /TASS/. Thousands of people, together with representatives of Georgia's opposition parties, are storming the headquarters of the country's parliament in Tbilisi after an incident with Russian State Duma member Sergey Gavrilov. Georgian TV channel Imedi is broadcasting the developments live.

According to Imedi, demostrators are trying to break through the police cordon near the main entrance to the parliament building on Rustaveli Avenue. Special forces are trying to prevent people from entering the building. Demonstrators are throwing water bottles and other objects at the police. Several protesters have broken through the cordon and entered the building's inner courtyard.

Demonstrations followed the participation of Russian State Duma member Sergey Gavrilov and other Russian delegates in the 26th session of the General Assembly of the Interparliamentary Assembly on Orthodoxy (IAO) in Tbilisi. On Thursday morning, Gavrilov opened the session as the IAO president. Opposition Georgian parliament members condemned Gavrilov for addressing the delegates while sitting down in a chair of the parliament chairperson. Opposition representatives then picketed the rostrum and the chair of the parliament speaker and did not allow the session to continue.

A decision was made later to finish the session, and for the Russian delegation to leave. Representatives of the ruling party "Georgian Dream - Democratic Georgia" said that they did not know that Gavrilov would open the session and think that the protocol was broken.