Or is it hot steam from a hydrogen fuel cell?
hoom

It´s a diesel Sub, so it´s ok. If a nuclear sub smokes like this…

Could be, but why would the diesel be off for so long?
Running on batteries?
GunshipDemocracy

flamming_python wrote:
Could be, but why would the diesel be off for so long?
Running on batteries? 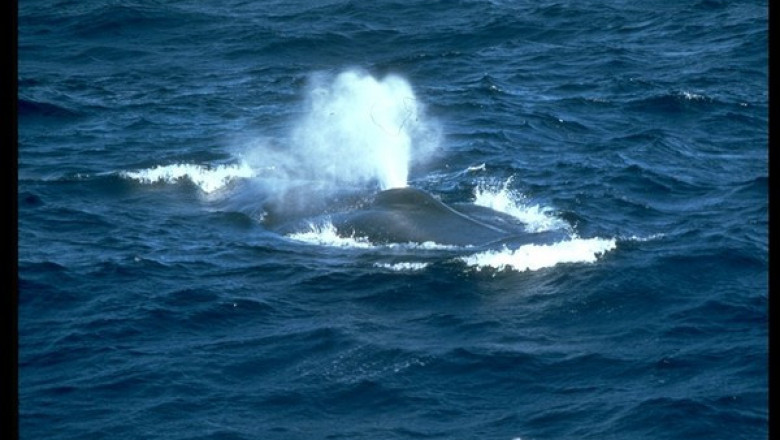 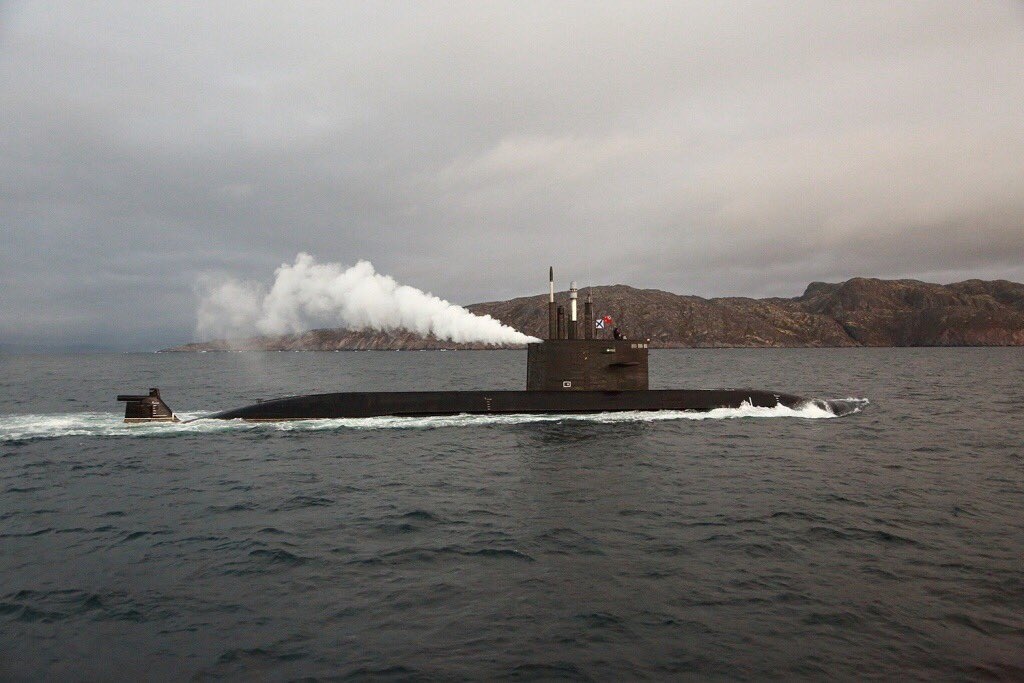 Now that is just embarrassing ...

I guess you have zero experience with diesel during cold snaps?

It may be related to the AIP and not the engine. Even old kilos don't smoke, why would this thing smoke ?
Hole

Who the f... cares? This is a military vessel. It is still much cleaner than german diesel engines.

I guess you have zero experience with diesel during cold snaps?

It is not exactly cold there this time of year.
GunshipDemocracy

Vladimir79 wrote:
It is not exactly cold there this time of year.

it was morning and looks like there's no sun. In St Petersburg now at night can be 10-11 Celsius.
hoom

There wasn't a specific date given by the poster @Balancer, he does say North & a 2nd poster said it was July.
The other pic is St Petersburg Navy Day (I presume) so has apparently transitioned before/since. 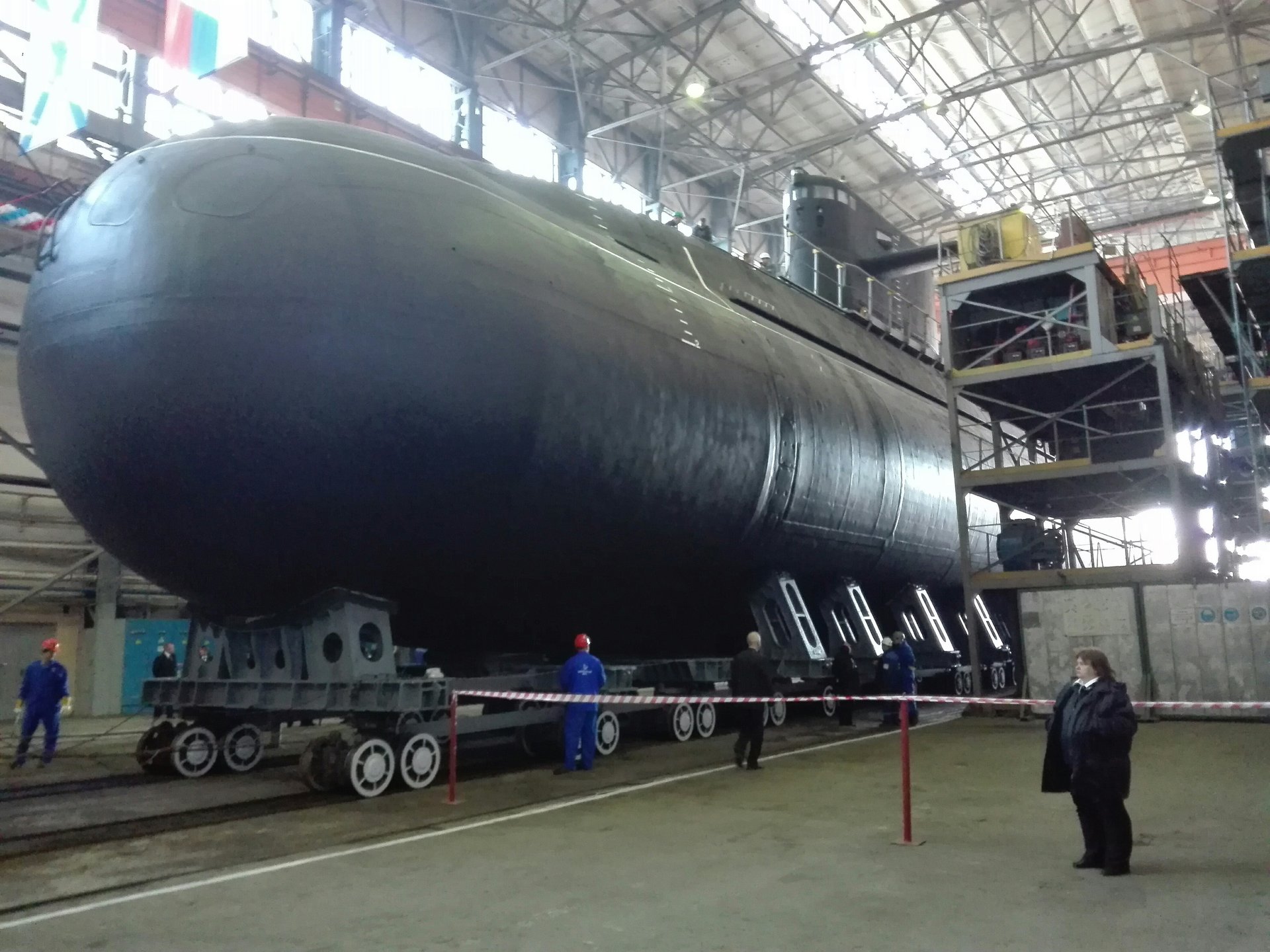 Filling out a 6 ship squadron?
Tingsay

Are they with AIP?

Filling out a 6 ship squadron?

No but 1/3 smaller crew complement and much better specs all round.

And it's in the water: 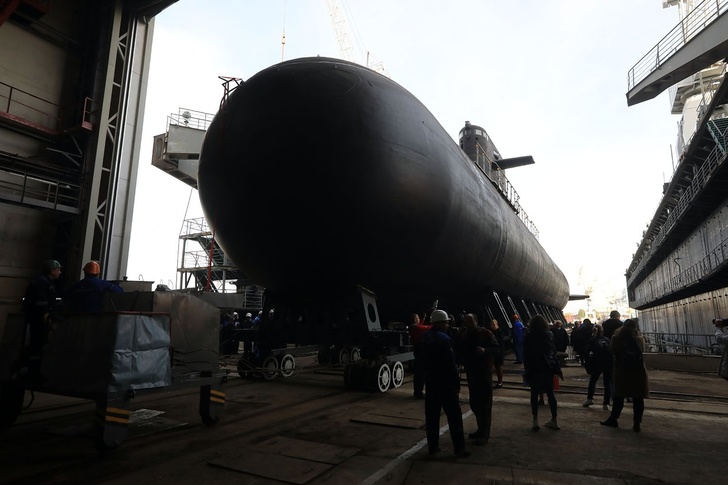 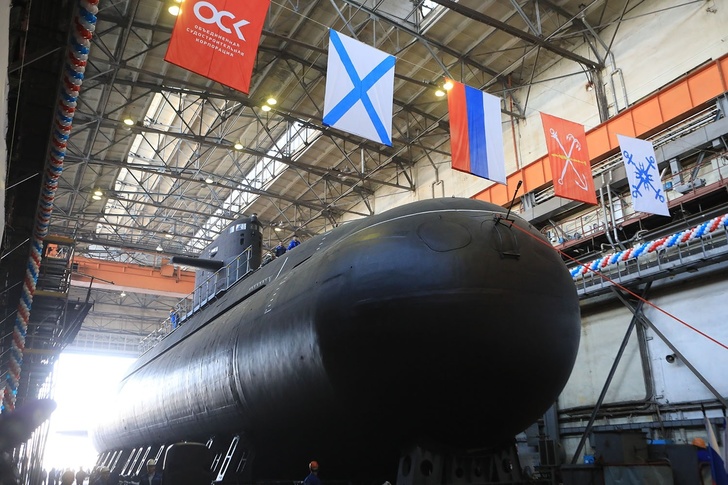 According to sputnik, which cites the defence ministry, it has some sort of AIP.
hoom

The class was supposed to have AIP but it didn't work right -> as far as I'm aware they're completing without.
miketheterrible

The AIP system has undergone and apparently passed bench tests. So they are continuing with the AIP. Are they built on these newer vessels? Dont know. But they are to get them eventually if they are not.
hoom

Amazing how the background can affect the impression: 1st pic its clearly new with just-painted sheen
2nd pic with the yellow setting sun & background of decrepitude it looks rusty, faded & streaky with wonky railing, like its been sitting there since the '90s...
I had to double take that it wasn't a pic of Alrosa

Some of the Russian language reporting talked about 10* Kalibr launchers & there was a cutaway drawing showing a small hump with VLS behind the sail, clearly that isn't actually the case, apparently was an offering for export version.

Edit: towed array is pretty surprising on such a little sub isn't it?
Hole

Maybe the 2 vessels that will be ordered get the VLS.

First plan was to fit the fifth sub with the AIP system, but at that time the Navy didn´t want a new class of normal diesel subs so the completion of the second (now launched) and third sub was suspended until the AIP system was ready.
Vladimir79

GunshipDemocracy wrote:
it was morning and looks like there's no sun. In St Petersburg now at night can be 10-11 Celsius.

It clearly wasn't night time.  According to the first picture these were taken around Navy Day which is at the end of July. On Navy Day it was rather hot at 28°C for the high and 19°C for the low.
GunshipDemocracy

Hole wrote:Maybe the 2 vessels that will be ordered get the VLS.

First plan was to fit the fifth sub with the AIP system, but at that time the Navy didn´t want a new class of normal diesel subs so the completion of the second (now launched) and third sub was suspended until the AIP system was ready.

677 Lada has neither VLS nor AIP afaik
1650  or 950 Amur (river not Amour ;-) were to be export variants of Lada  with VLS but they never really built


Next improved Kalina model shall have AIP if VLS I dont know, but unlikely.  They are to be for defence and anti sub mostly no need for massive salvos AShM.
There is no Kalina in fleet planned before 2025. Perhaps something changes with program 2027

Vladimir79 wrote:
It clearly wasn't night time.  According to the first picture these were taken around Navy Day which is at the end of July.  On Navy Day it was rather hot at 28°C for the high and 19°C for the low.

then it must have been external steam engine heating Sterling AIP

The submarine "Kronstadt" of the project 677

At the JSC "Admiralteyskie Verfi" (part of the United Shipbuilding Corporation - USC) in St. Petersburg on September 20, 2018, the ceremony of launching through the launching dock of the Russian Navy being built for the Russian Navy took place. A large diesel-electric submarine B -586 "Kronstadt" (serial number 01571) - the second submarine of the project 677 (cipher "Lada").

As reported in the press release of Admiralty Shipyards JSC, Alexander Buzakov, General Director of Admiralteiskiye Verfi, named the ship's descent as a significant event: "Today we launch the ship laid in 2005, during these years both financing and construction were suspended. But, the forced pause allowed us to take into account the experience of operating in the Northern Fleet the first ship of this project of the St. Petersburg submarine. Next year we plan to sign contracts for the fourth and fifth boats of the series, and we believe that the future of the non-nuclear submarine fleet is behind the project 677! ".

On behalf of the Commander-in-Chief of the Navy, the participants in the solemn ceremony were greeted by the Deputy Chief of the Shipbuilding Department of the Russian Navy's Main Command, Captain I Rank Mikhail Krasnopeev: "The whole history of the Admiralty Shipyards, beginning with the Peter the Great era, shows that the company is able to build unique ships. And today's descent is a vivid confirmation of this. It is a great honor for Russian sailors to serve on such modern submarines. "

The submarine "Kronstadt" is built according to the project corrected by the results of the pilot operation of the main ship. On the ships, the shipboard technical equipment control system, the electromotive system, the navigation complex are profoundly modernized. In the long term, the submarines of the Lada project are planned to be equipped with an anaerobic air-independent plant (VNEU), created by specialists of the Central Design Bureau of the MT Rubin.

The submarines of Project 677 Lada belong to the fourth generation of non-nuclear submarines and are now recognized as the most modern and promising domestic non-nuclear submarines, both from the point of view of combat effectiveness and other tactical and technical characteristics. JSC "Admiralteyskie Verfi" is the only shipbuilding plant of this class.

It is significant that the descent of the submarine "Kronstadt" takes place in the conditions of a large-scale reconstruction of the slip-completion plant, which is carried out within the framework of the Federal Target Program "Development of the Defense Industrial Complex for the period 2011-2020". Upon its completion, the company will create a modern specialized complex of a closed cycle for the construction of non-nuclear submarines, which will optimize the production process and expand the capabilities of the Admiralty shipyards in the construction of underwater orders. The works under the reconstruction are carried out without stopping the existing production and do not affect the terms of execution of the contracts of the enterprise.

On the bmpd side, we point out that the second large diesel-electric submarine of Project 677 (code Lada) B-586 Kronstadt (serial number 01571) was laid on JSC Admiralteyskie Verfi shipyard on July 28, 2005, but in 2009 the decision of the Ministry of Defense of Russia the construction of the ship was suspended until the transfer to the pilot operation of the head submarine project 677 B-585 "St. Petersburg". The state contract for the resumption of the construction of the B-586 Kronstadt under the adjusted technical project was signed on July 9, 2013.

Development of a non-nuclear submarine of a new generation of Project 677 was carried out by JSC "TsKB MT" Rubin "from the beginning of the 1980s. The head submarine of project 677 B-585 "St. Petersburg" (serial number 01570) was laid on JSC "Admiralty Shipyards" on December 26, 1997. However, the construction of the boat turned into a long-term construction and it was launched only on October 28, 2004 and entered the factory road tests in 2007. On April 22, 2010, the submarine "St. Petersburg" was accepted by the Russian Navy, but up to now it is in trial operation in the Northern Fleet.

The third submarine of the project 677 B-587 "Sevastopol" (serial number 01572) was laid on JSC "Admiralty Shipyards" on November 10, In 2009, under the decision of the Ministry of Defense of Russia, the construction of the ship was also suspended. In October 2013, the name "Sevastopol" by order of the Commander-in-Chief of the Russian Navy was abolished for this boat and handed over to the universal landing ship of the Mistral type ordered in France for the Russian Navy. The contract for the construction of the third submarine of Project 677 on a modified project was signed by the plant in late 2014. On March 19, 2015, the submarine of project 677 B-587 (serial number 01572) was reloaded at JSC Admiralteyskie Verfi shipyard under the name of Velikiye Luki.

In July 2017, at the International Naval Exhibition IMDS-2017 in St. Petersburg, General Director of JSC "Admiralty Shipyards" Alexander Buzakov said that under the terms of state contracts, the delivery of submarines "Kronstadt" and "Velikiye Luki" of the Russian Navy is scheduled for 2020 and 2021 years respectively. 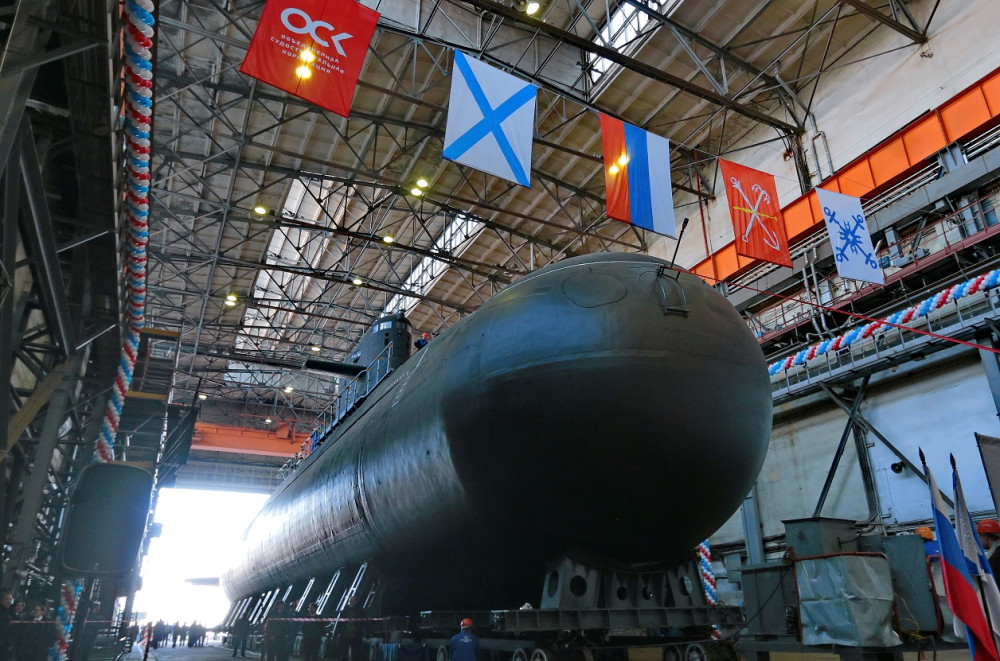 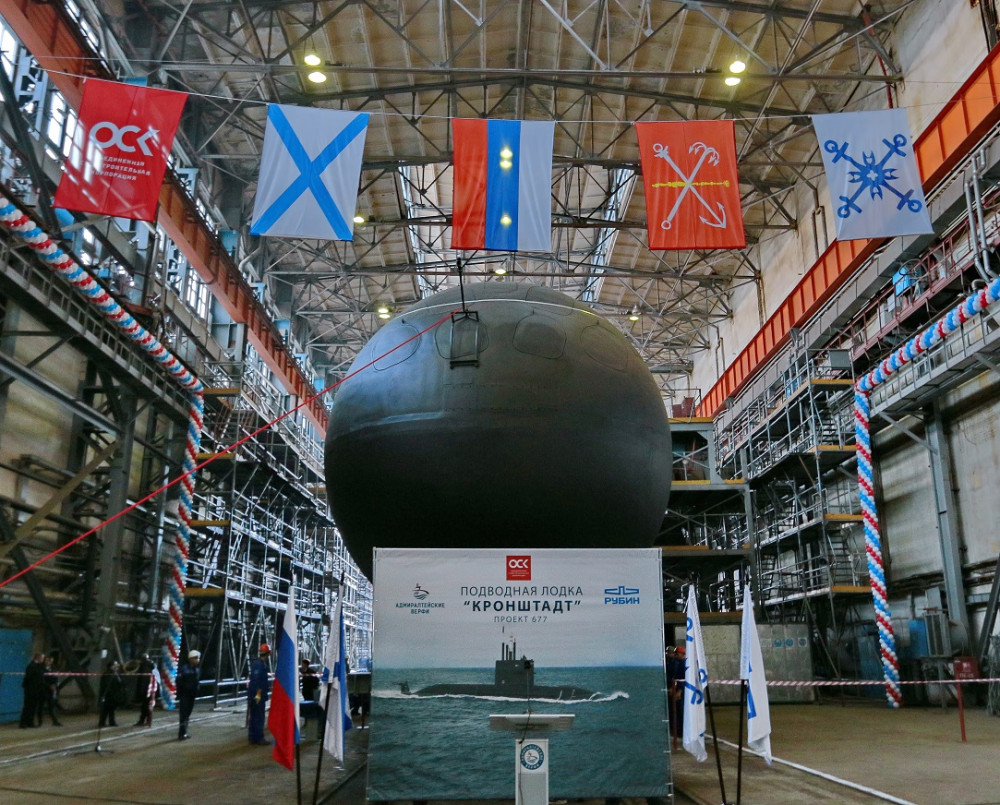 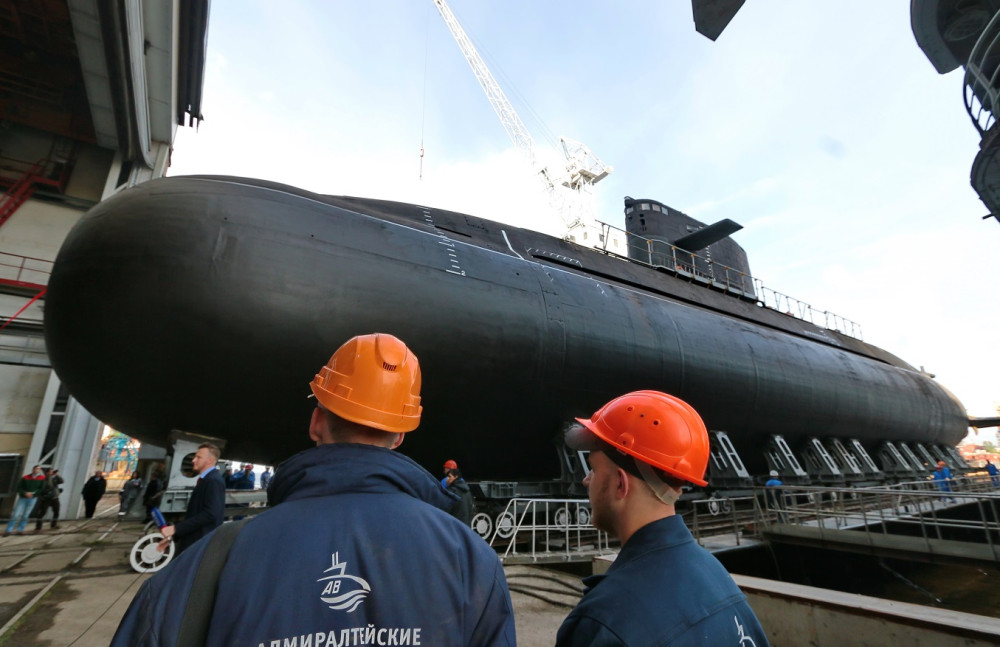 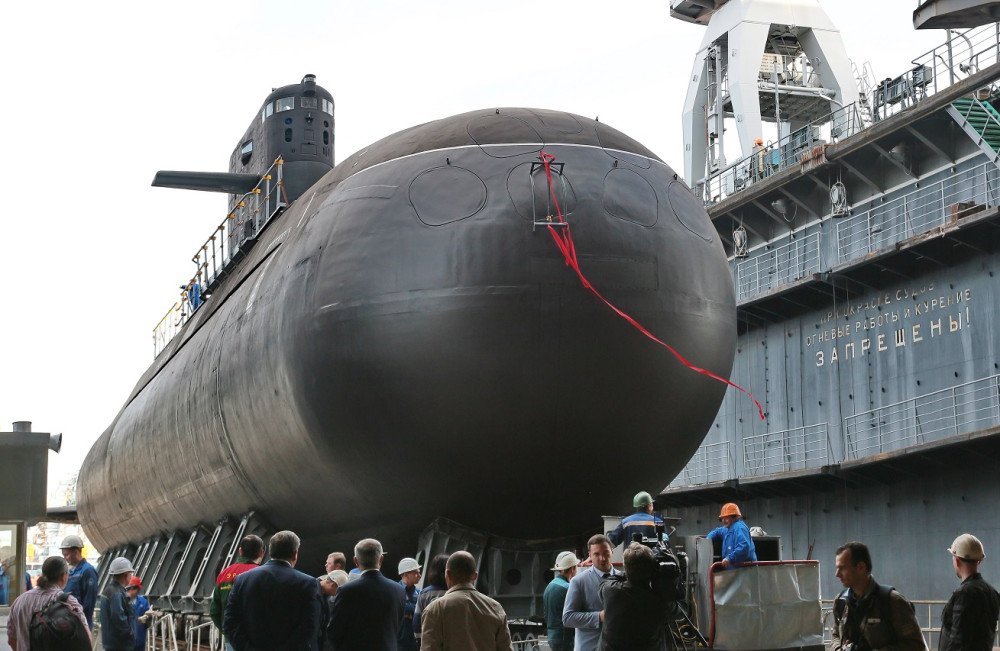 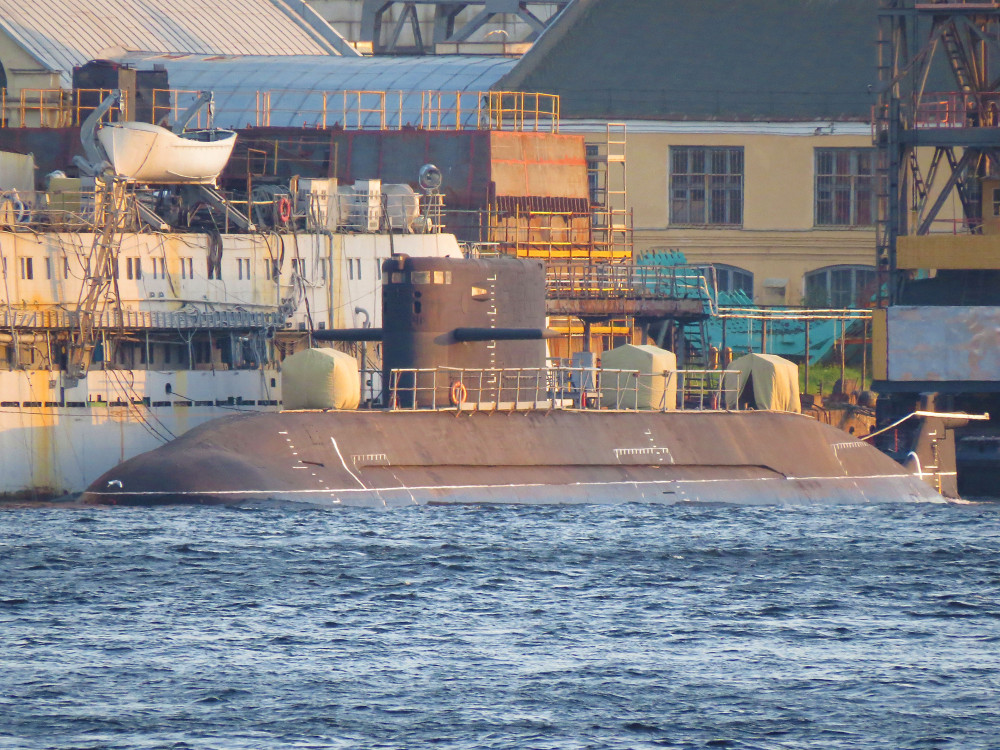