Is that by their own initiative? Cause I thought Sukhoi didn't win any tenders for their UAV programs?
Austin

sepheronx wrote:Is that by their own initiative? Cause I thought Sukhoi didn't win any tenders for their UAV programs?

Most likely their own initiative, but that is anyways still proposed project from what i am aware, not fully funded or supported.
jaguar_br

Austin wrote:has any one got access to this full Janes Article by Piotr Butowski

Nice... so acording to the new, there are in development three UAV classes, being 3, 5 and 10 ton.

One of these is "already made", I suppose it is the Altius-M (5 ton class). The 3 tons one might be the Myasishchev "overview-1", seemingly equivalent to RQ-17 Sentinel.
Guest

So appears that Russians are planning to buy another 30 Forpost sets for RuAF, which is 90 drones in total during period of 5 years. 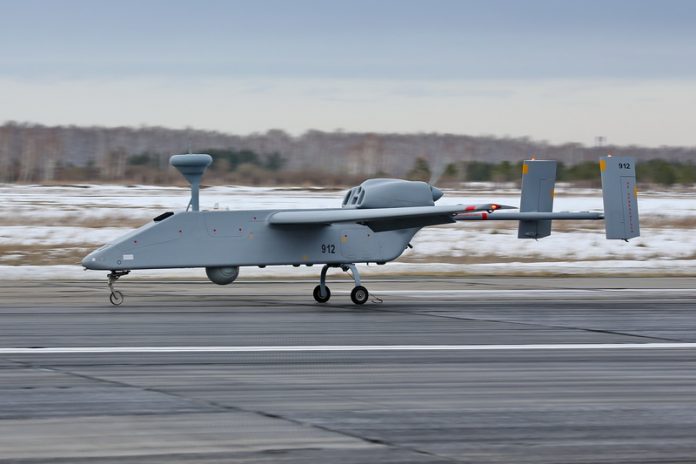 Russia has adopted the IAI “Searcher” UAV and manufactures this Israeli product under license as the “Forpost”, based on a subsequent production design designated as “Searcher II” which is an improved Second Generation model introduced by IAI in 1998.

This is probably a good thing... if they are cutting off Ukraine they might as well cut off Israel too.

They have all the production equipment and plans.... I am sure they can improve certain areas and features to their own needs... now is an opportunity.
KoTeMoRe

... I don't exactly think that the US can stop Israel from collaborating with Russia. It's just too big and there's way too many opportunities with the Russian/Soviet Israeli community. Furthermore, most of the heavy lifting that Israel does regards tactical low level UAV's. And there's always eager 3rd parties, like ROK.
GunshipDemocracy

Militarov wrote:If i recall they said Sukho is to build 20t class UCAV on PAK-FA borts.

Okhotnik-Y AFAIK, was to use "elements  and solutions" of PAK FA not hull directly.


KRET´s vision of heavy drone, is this the one? 2 interesting articles from last year below.

Russia could be working on a low-observable, F-35-hunting unmanned air vehicle that uses deeply-integrated electronic warfare systems to stay hidden from radars. The tip-off comes from electronic systems producer KRET, which has a curious UAV model on display at the MAKS air show in Moscow.

According to the company’s first deputy chief executive officer Vladimir Mikheev, this aircraft model is more than just a sleek promotional display – it is an advanced military UAV being developed by the United Aircraft Corporation (UAC).

Concern Radio-Electronic Technologies (KRET) is a subcontractor on the project, he says, providing the fundamental communications, radar, electronic warfare and self-protection systems, as well as the ground control station.

Speaking via a translator, Mikheev tells Flightglobal that the company is involved with two military UAV projects – one in development and one in the concept phase – but both ventures of UAC.

He declines to name the project and does not say which UAC design bureau is in charge, but confirms some of its key capabilities.

Mikheev says the UAV has been designed to detect stealth aircraft in the same vein as China’s ambitious “Divine Eagle” project, which he claims is based on technology “borrowed” from Russia and the USA.

Such aircraft aim to detect low-observable US combat aircraft using X-band and UHF radars, specifically the Lockheed Martin F-22 and F-35 and Northrop Grumman B-2. But airborne surveillance is just one of the UAV’s capabilities.

Mikheev says KRET is providing a deeply-integrated electronic warfare system that not only provides a protective electromagnetic sphere around the aircraft to counter air-to-air missiles, but also cloaks it from radars.

Mikheev says the UAV’s avionics, radar and electronic warfare systems are derived from those being produced for the Sukhoi Su-35 multirole fighter and the Kamov Ka-50 attack helicopter. KRET is also deeply involved in the Sukhoi T-50/PAK FA fighter project.

“Today we are talking about 15% to 20% annual growth in the direction of electronic warfare systems,” he says.

It remains to be seen whether this UAV project is just marketing or a mature development programme with similar goals to China’s Divine Eagle UAV. It would come as the stealthy F-35 enters serve as the West’s primary “first-day-of-war” combat jet.

Media: In Russia will create new UACVs
Level of translation - don´t shoot me oki? I am justa piano guy  :d


Aviation holding company "Sukhoi" and "Experimental design Bureau named after M. P. Simonov" are engaged in the development of shock unmanned aerial objects "Hunter-U" and "the Apple" (the eye/pupil  - for me

New drones will be classified as aircraft medium and long range. And the fact that they will "shock" sensation, because at the moment in the Russian army, there are only reconnaissance UAVS.

"At present the design Bureau Simonov conducts development work on the creation of shock drone medium-range "the Apple" at a speed of 800 kilometers per hour. Parallel to this, a "Dry" shock develops UAV long range with the same speed "Hunter-Y", - said a source from oboronno-industrial complex.

Previously it is known that "Apple" will be designed based on the project UAV Tu-143 "Flight". This drone was developed in the early 70-ies of the last century, but, despite his advanced age, this project remains relevant to this day. The launch of the "Eye" will be carried out with manned aircraft.

"Hunter" will, apparently, be a "flying saucer" that runs with the land. Takeoff weight of this miracle-weapon - a fantastic near 20 tons, and the first prototypes should appear before 2020.

GarryB wrote:This is probably a good thing... if they are cutting off Ukraine they might as well cut off Israel too.

They have all the production equipment and plans.... I am sure they can improve certain areas and features to their own needs... now is an opportunity.

Yeah but Russia still could use technological imput from Israel. Israelis are after all leaders in this field, with 40 years long experience.

KoTeMoRe wrote:... I don't exactly think that the US can stop Israel from collaborating with Russia. It's just too big and there's way too many opportunities with the Russian/Soviet Israeli community. Furthermore, most of the heavy lifting that Israel does regards tactical low level UAV's. And there's always eager 3rd parties, like ROK.

I think US has power over Israel on this one due to fact certain key components are being fabricated in the US. So they can use it as bargain chip.

Finally after years since they said they would.
GunshipDemocracy 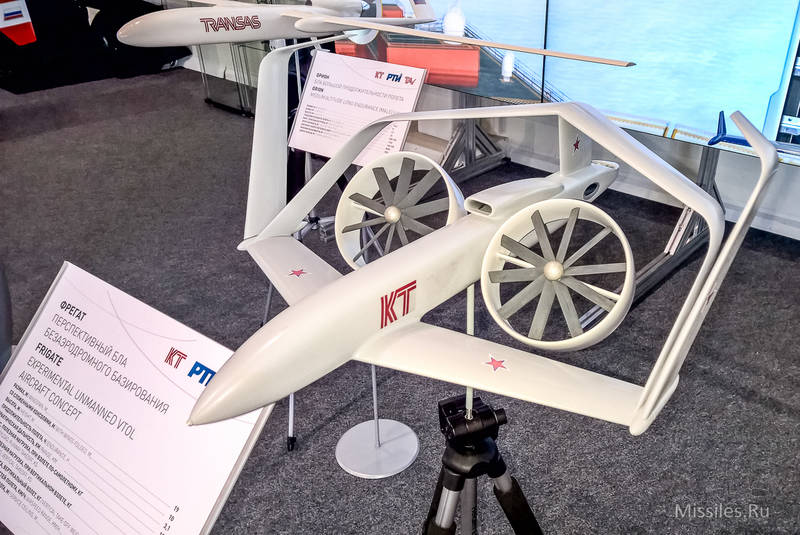 The flight model of the drone "Frigate" was successfully tested

AMMAN, may 10 — RIA Novosti. The flight model of UAV-based besaratinia Fregat was successfully tested, confirming a number of underlying characteristics, said RIA Novosti on Tuesday during an arms exhibition SOFEX-2016, a representative of the developer blah BLAH Group "Kronstadt".
Project UAV "Frigate" was first presented at the MAKS-2015 in Zhukovsky. According to the technical scheme, it will combine the versatility of vertical take-off and landing flight characteristics of aircraft of a scheme that makes it possible to operate UAVS in areas with poor infrastructure at great distances from the places of deployment.
"We have proposed aerodynamic configuration of the aircraft with rotating fan propulsion, aimed primarily at achieving a large flight distance (2-3 times beyond the range of modern helicopters) and high speed (not less than 500 kilometers per hour). Created the flying model and carried out its flight tests, which confirmed the fundamental feasibility of high-speed flight with vertical takeoff and landing", — said the Agency interlocutor.
It is expected that the Frigate will be capable to carry up to 1700 kilograms useful load at takeoff "airplane" and up to one ton — during helicopter takeoff. The maximum altitude will be 8 thousand metres, expected duration around 10 hours. UAVS will perform a wide range of applications, from air monitoring to operational delivery 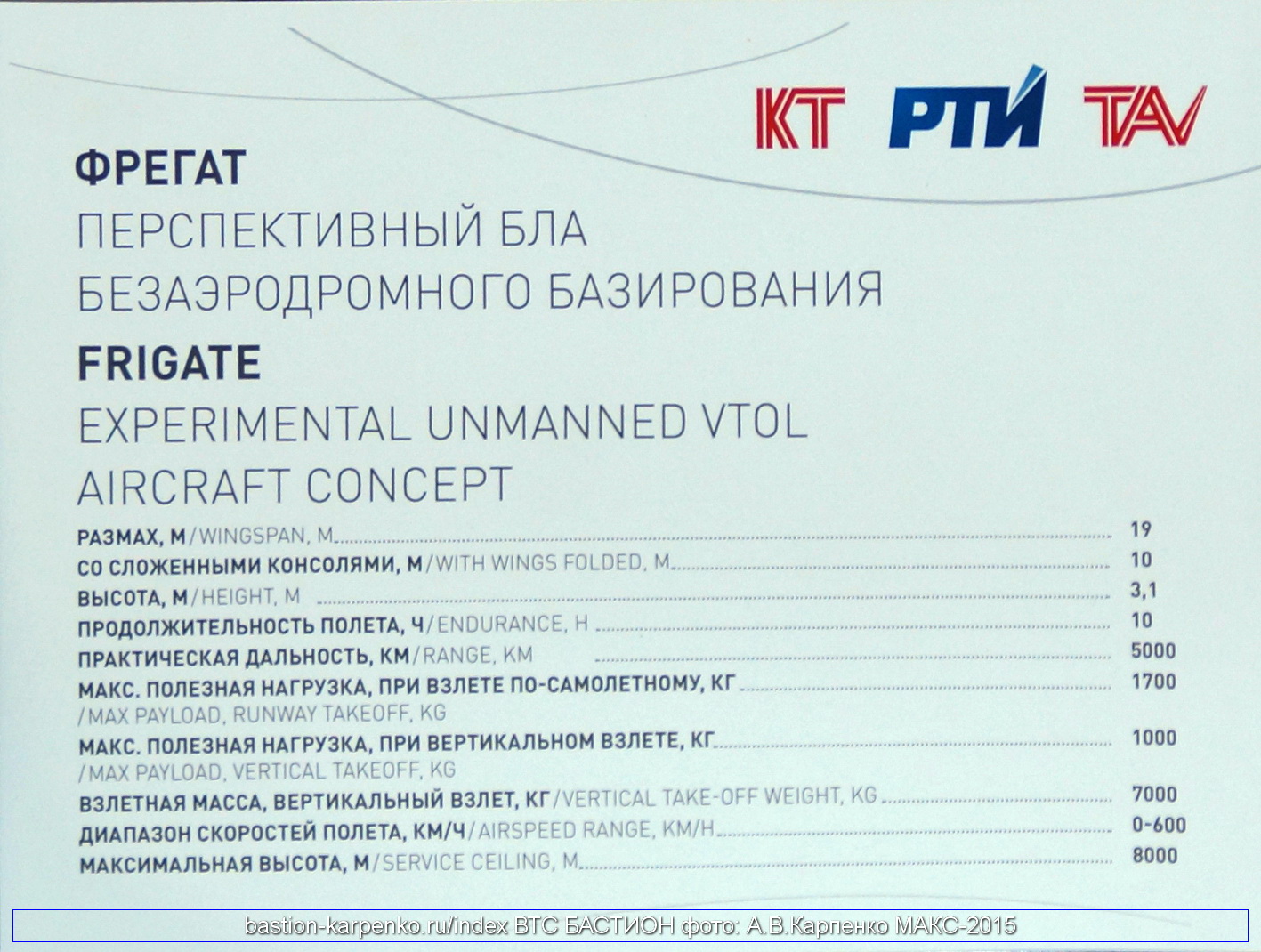 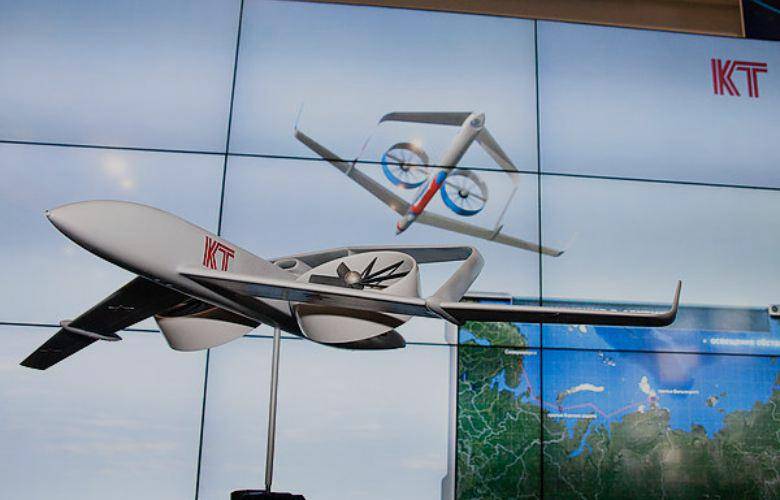 I was expecting the "Frigate" to be larger than its actual size.,

Project Canada wrote:I was expecting the "Frigate" to be larger than its actual size.,

It's a testbed version, real thing will be full size.

Project Canada wrote:I was expecting the "Frigate" to be larger than its actual size.,

Its flying model only from what i understood

Speaking of this company (Transas):


MOSCOW (Sputnik) – The expected flight endurance of the “Orion” is at least 24 hours, while the altitude – about five miles. The drone will also carry a pay load of up to 660 pounds.

“At the Gromov Flight Research Institute [in the Moscow Region] tests of the medium altitude long endurance unmanned aerial vehicle ‘Orion’ have started,” the source said.

The Russian Defense Ministry signed a contract for the development of the drone with the Russian Kronshtadt company, formerly known as Transas, in October 2016.

Transas initially planned that the drone would weigh about a metric ton but at the MAKS-2015 air show the company's chairman, Nikolai Lebedev, announced the take-off weight had been increased by more than 400 pounds. 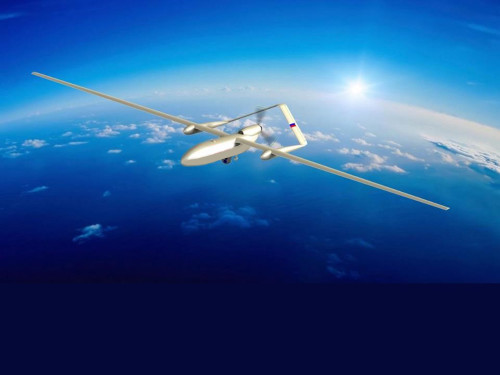 Finally we are seeing some fruits of long UAV develpments in Russia. Keep them comming...
Guest

"We have already completed the building’s construction, purchased equipment and are currently adjusting production facilities," Tagirov said. "We are organizing the local production of engines for our needs to mount them on military unmanned aerial vehicles," the spokesman said."Prototype engines are planned to be manufactured in 2017," he added.

"The serial production of the military unmanned aerial vehicle is planned to start in 2020. By that time, we will have the sufficient level of engine local production ," the spokesman said.

According to Tagirov, the work to develop the unmanned aerial vehicle for the Russian Defense Ministry is on schedule.

According to him, the unmanned aerial vehicle can be also used to transport cargo as its cargo-carrying capacity equals two tons.

Source: a small surveillance drone with a jet engine created in Russia

"Work is underway on a small UAV with a jet engine," - said the Agency interlocutor.
According to the source, the device will be able to fly a few hundred kilometers, but other details were not disclosed.
In December 2015, reported on the development of another attack drone, capable of flying at speeds up to 800 km/h useful load of approximately 250 kg. As said the source TASS and its tests are "close to completion".

UAV "Forpost" in Hmeyim base, Syria 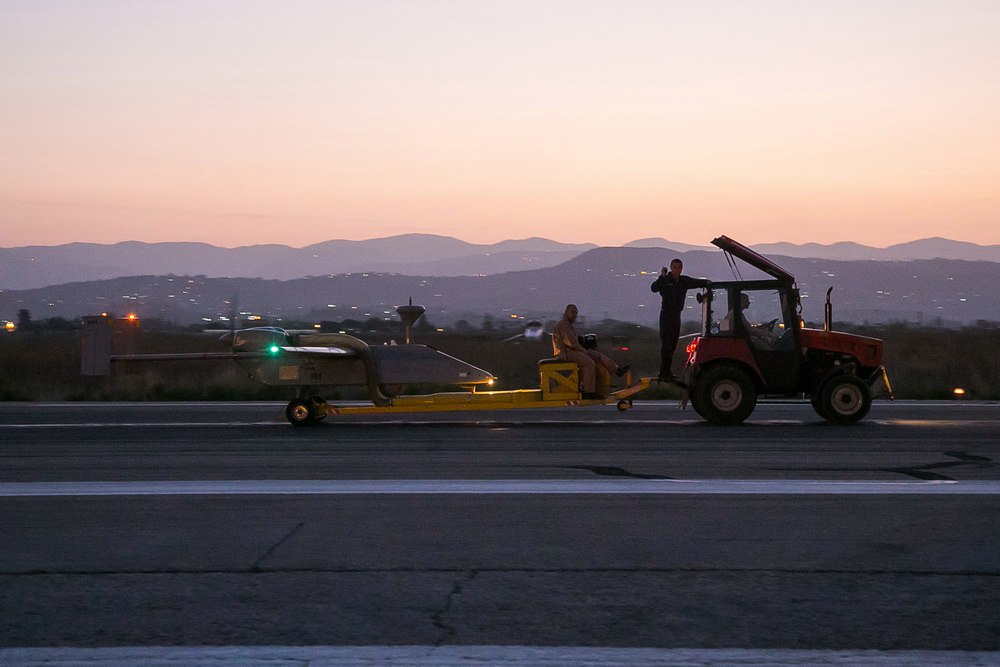