Re: Ka-52 in Russian Air Force

Most helicopters would be sitting ducks to fighter aircraft simply because fighter aircraft have radar that can see aircraft down to ground level including hovering objects from enormous distances, while helicopter rarely have the radar or the missiles to fire back.

In the case of Ka-52 in army aviation then it will carry Verba or Igla-S or R-73 for self defence or for use against drones, but the normal defence that protects the Ka-52 attacking HATO vehicles would be the Russian AF fighter aircraft... most likely a mix of frontal aviation which will likely soon be expanded with MiG-35s and Su-30s, while their ground based air defence network with TOR and Pantsir and Pine and BUK and S-300V will shoot down any incoming missiles of most types, and of course western AWACS would be dead very very quickly simply because S-400 missiles of the long range variety as well as S-500 missiles are big and power and expensive, but the chance of killing an AWACS makes the shot worth it.

There is also the MiG-31 and soon a replacement missile for the R-37M with a significant increase in performance, not to mention the fact that helicopters have radar warning receivers so when they detect an incoming air launched missile they can fly between a few buildings or near a tree which will set off the incoming missiles proximity fuse and destroy the missile before it gets near the helicopter.


Specifically I was suggesting it in a scenario where a Ka-52 is integrated in to IAD with a few land command posts that passively listens to a set of radars located 10km away from the command posts. All the pieces are well hidden behind dummy foliage designed like a Nakhidka kit, where the Ka-52 is actually on a landing pad besides the command posts hiding behind a mountain range. Once the command posts inform the Ka-52 pilot of OPFOR fighter approach from 200km away, the Ka-52 starts up and hovers 50-100 meters above the canopy but still behind the mountain range, and once the OPFOR fighter is within 150km range, the 2 R-37M's are launched while being remotely guided by radars in the IAD. It's like a point blank attack with a OPFOR fighter having less than a minute before being shot out the sky by a pair R-37M's traveling at Mach 6.

Or you could use the Ka-52 Army Scout helicopter the way it is intended and it can head back to base and do its normal work of looking for enemy including using air launched drones, while fighter aircraft can be sent out to intercept the intruder and identify it and challenge it and if necessary shoot it down.

The Ka-52K naval helicopter has a large nose mounted AESA radar which means it can detect aircraft and large ships at reasonable ranges, but even then operating from a helicopter carrier it could climb to 5km altitude and scan for incoming threats which can be engaged by long range ship based SAMs or anti ship or anti sub weapons.

If you really want something to fly out and be sneaky and find targets and monitor engagements then us Su-57s launched from 85K ton CVNs... they can carry the next gen replacement missiles of the R-37M family and do a much better job of dismembering the evil empire.

Re: Ka-52 in Russian Air Force 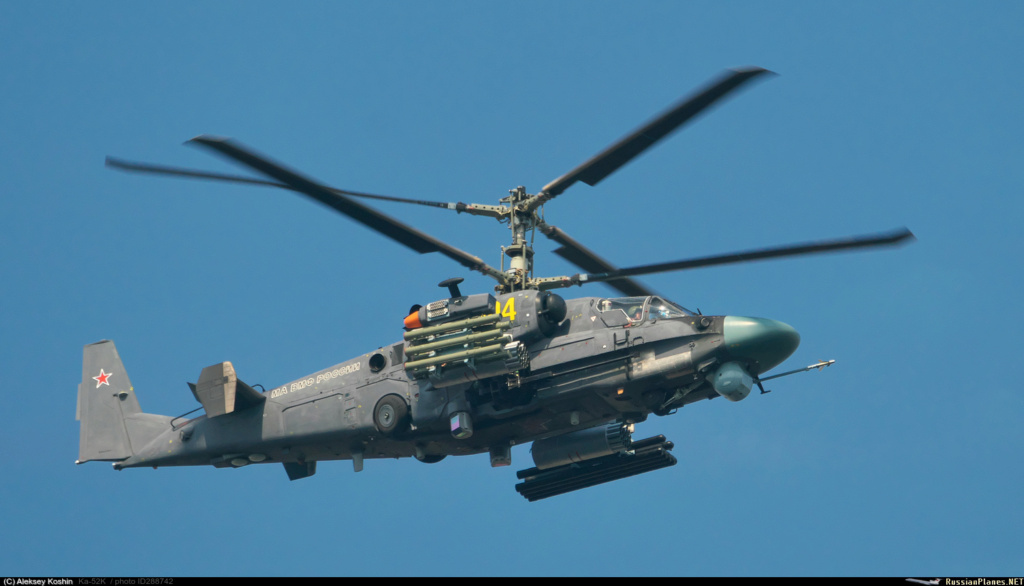