Lancet 3 is also 13kg and is used as a cheap suicide drone.
Mindstorm

Lancet 3 is also 13kg and is used as a cheap suicide drone.

Yes, probably someone will attempt tp create a similar loitering ammuinition with anti-tank capability, but this will require (mostly for the combined reconnaissance/strike capability) a substantial increase of the mass and of the costs.

In mine opinion the future of stand-off anti-tank systems will belong to high speed/heavy warhead/long range missiles with terminal autonomous homing like  product "Гермес" from КБП.

Similar missiles will have, thanks to very high speed, way better capability to overcome enemy air defenses and active protection systems of armoured vehicles ,will be delivered from distance up to 100 km and will allow optimized reconnaissance UAV or ground based reconnaissance units to merely provide for a brief time window the position of the enemy vehicle remaining at relatively safe distance (because will not be necessary any continous laser illumination of the target); the missiles will arrive quickly in the area and engage autonomously enemy vehicles/infantry concentration allowing the reconnaisance assets to egress early from the area.

Isos wrote:
All of them have such relaoder/storage magazin, revolver like : 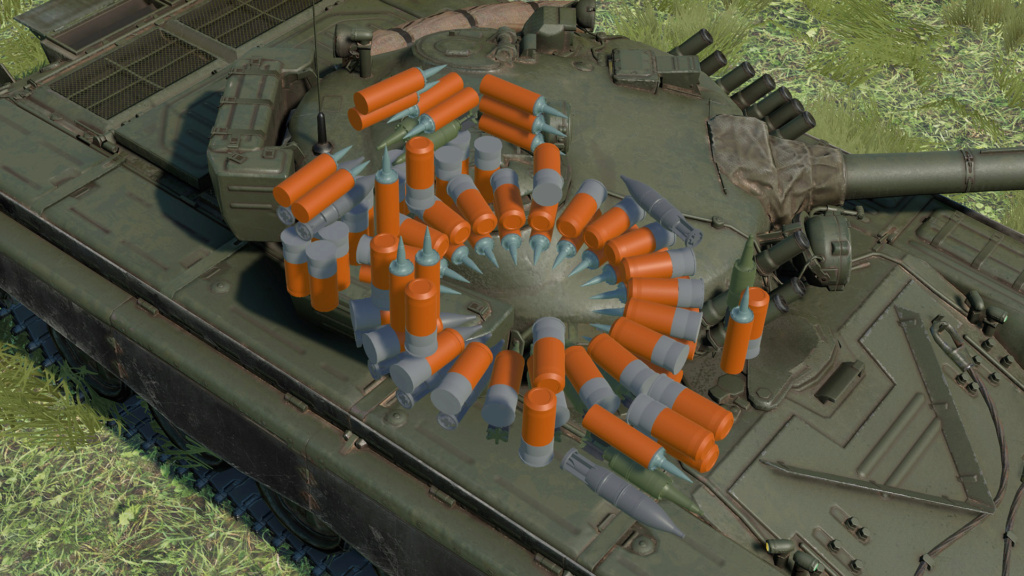 Stop that already.
You clearly see that this drawing lacks the perspective, do you?
In reality, the drum magazine is quite well protected, first of all being located VERY low.
If you will check any materials concerning the hit distribution, those area is among the safest of all the tank.
There is a difference for T-72 and T-64/followers, as they don't share the same ammo magazine. Instead, the 64 and + get one with propeller charges to sit in verticalized position, making them a double target in height.
Why does that matter?
Well ... the ballistics.
It is very hard to hit a target that sits 50cm above the ground level, while 80cm doubles the envelope or so.
72/90 magazine is top covered with armour plate as well, making it quite protected from splinters.
There are two issues with the soviet legacy tanks ammo layout.
First is lots of it inside the hull, but that is not something really different. The only one with a reduced ammo package inside the hull is M1. All the others drive the same boat.
And the second - much more important - is the ammo package for them.
Soviets vastly used HE ammunition, that gets triple the HE load if compared to any multi-purpose HEAT rounds NATO used.
I am not even sure now if any of them instead of Israel ever used a proper HE ammo for tanks?
Imagine an M1 turret magazine, filled with real HE ammo ... how much it would last a side RPG shot, and who would be the results?

But from the top you will touch the rounds for sure. It's not the same perspective as from sides or front.
GarryB

That model increased the mass of the UAV (effectively now a guided missile) to 15 kg and the entire launcher system to 54,4 kg and obviously cost (it cost more than the БТР-70 destroyed in the presentation video).

Hahaha... hilarious video there... love the way it was waved off because a potentially civilian vehicle was detected.


72/90 magazine is top covered with armour plate as well, making it quite protected from splinters.

It is also important that local weather conditions might actually make flying tricky... I don't doubt the munition will hit the tank but not so sure it could precisely target a feature like crew hatch.

Also look at the crew hatches on the new vehicles... they have composite armour on them too and are rather thick structures.


But from the top you will touch the rounds for sure. It's not the same perspective as from sides or front.

From the top a turret bustle is a huge target too.

Which side is the most switched on in terms of dealing with drones?

Isos wrote:But from the top you will touch the rounds for sure. It's not the same perspective as from sides or front.

The ones in the carousel - possibly but hardly.
All top attack ammo is a derivation of HEAT, let it be classical one or EFP.
Hitting the top of a tank it will be suppressed by ERA panels there, some thin main armor, and finally - the tank's interior to the carousel itself, covered by additional top armor plate. The distance itself makes both the cumulative stream and formed penetrator already suppressed.
But on the other hand, it will still make a mess with the remaining ammo, for sure. But again - all drive the same boat here with Ch2 and Leo2, while M1 has some ammo in the hull, too - but only a few rounds, limited to non-explosive types only by instruction.
That is why functionally all the modernization efforts you have witnessed after Chechen experiences, took that lesson first, removing/securing the hull ammo magazine, while retaning the carousel itself.
Russian_Patriot_ 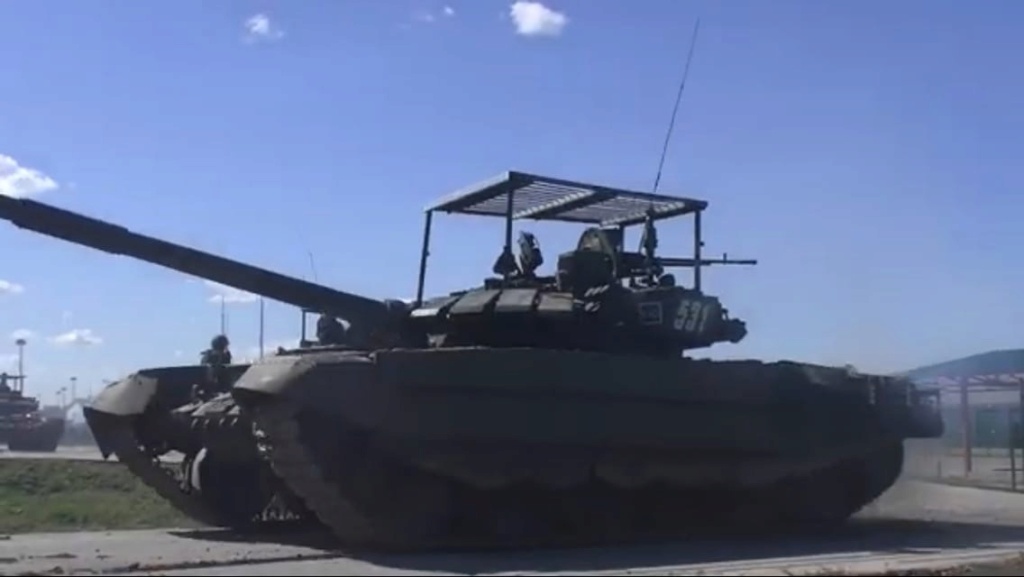 Still don't get the solution they reached for the top-mounted machine gun. Which can at least on the T-90 be operated remotely (not sure about latest T-72 modernizations), so you won't necessarily even see if there is an obstruction to turning it

It would be better to rig the top cover so that it turns along with the machine gun rather than with the turret. 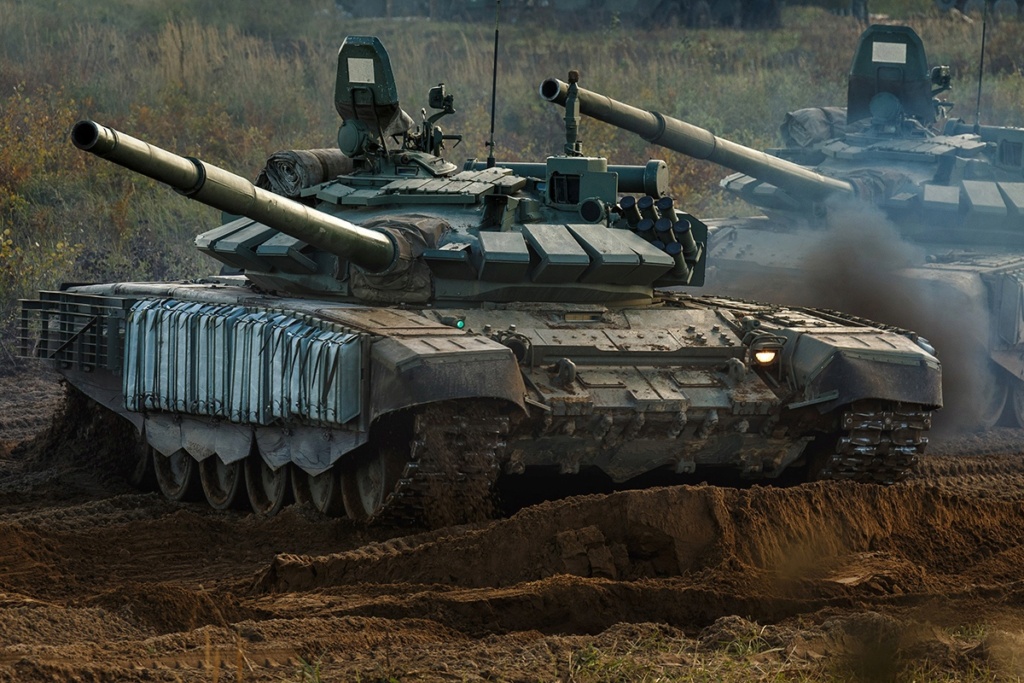 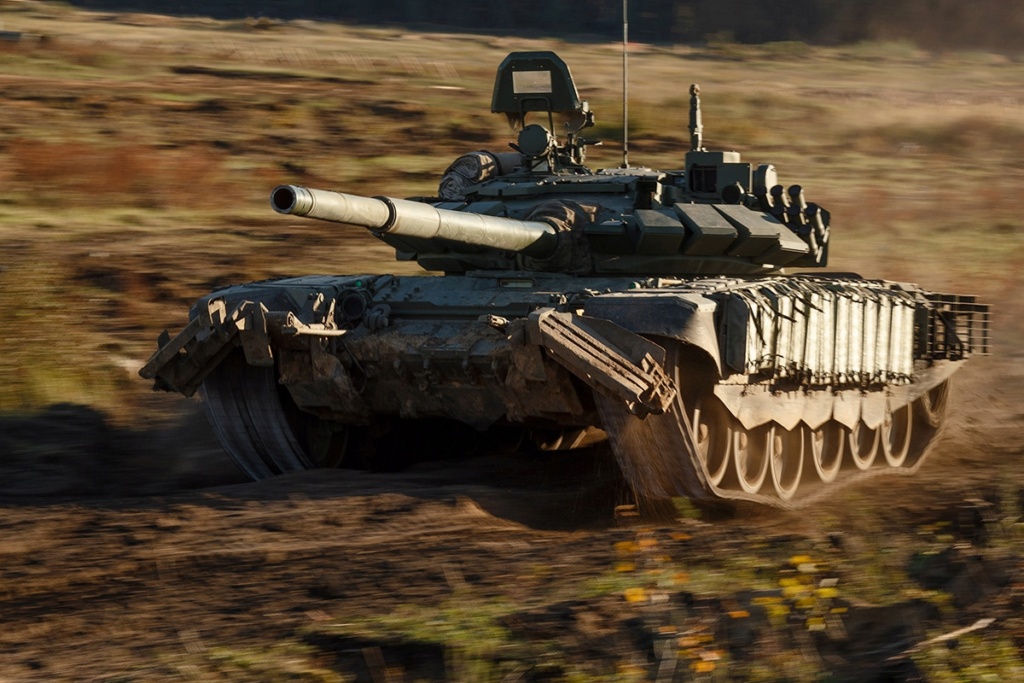 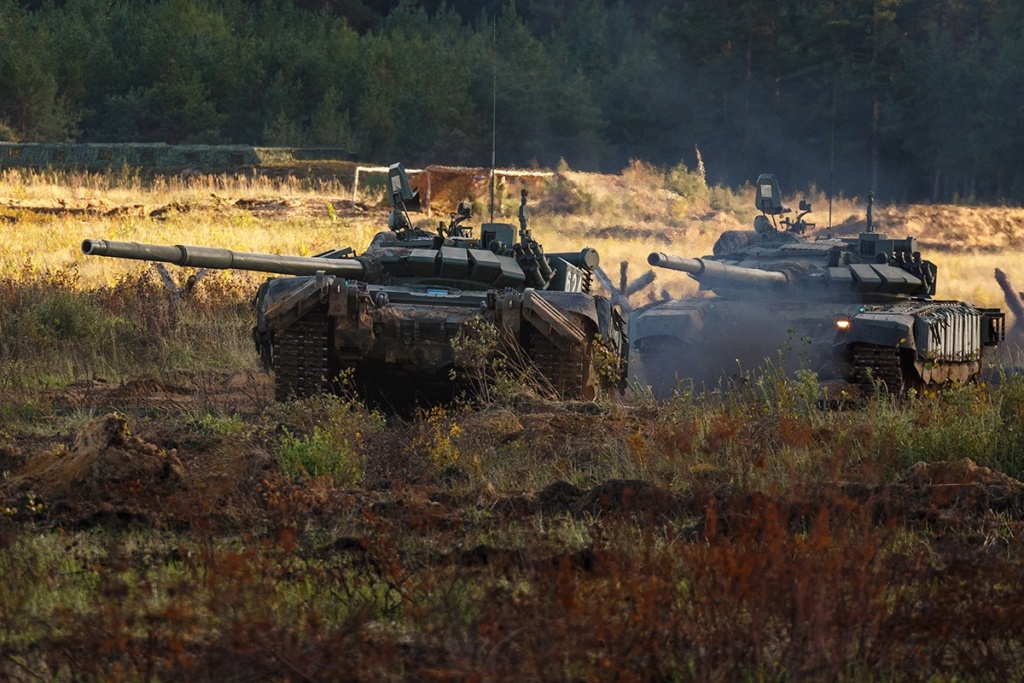 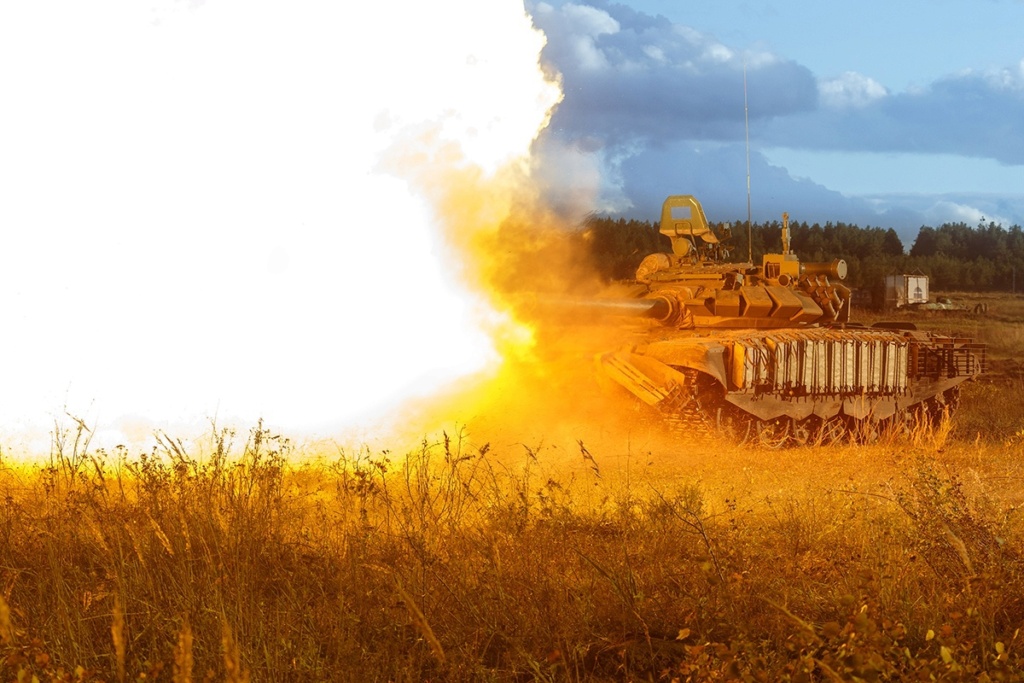 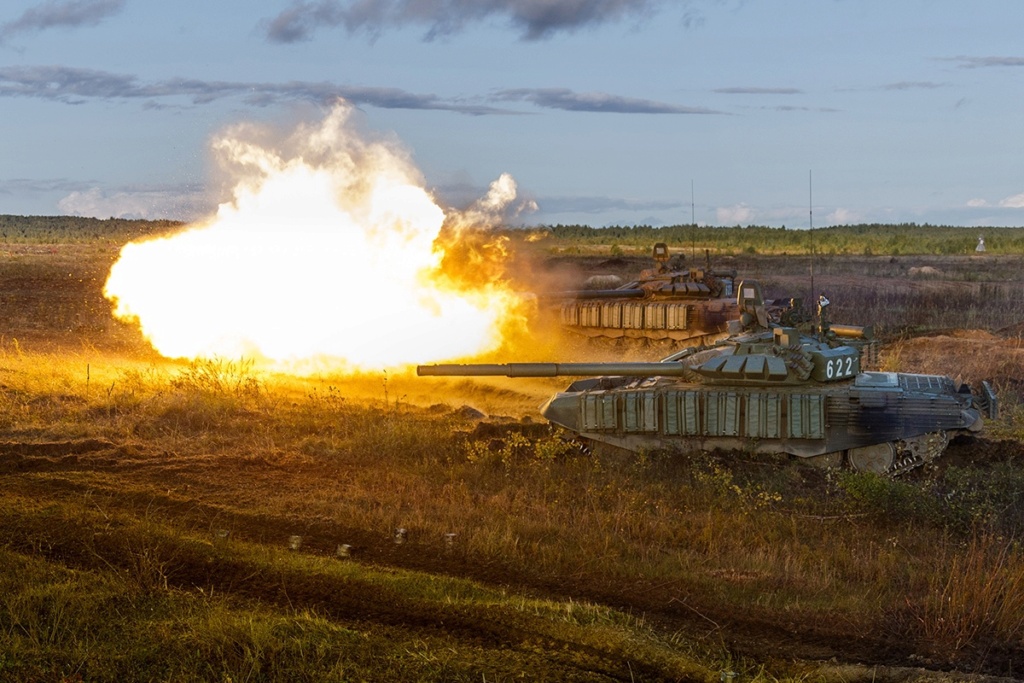 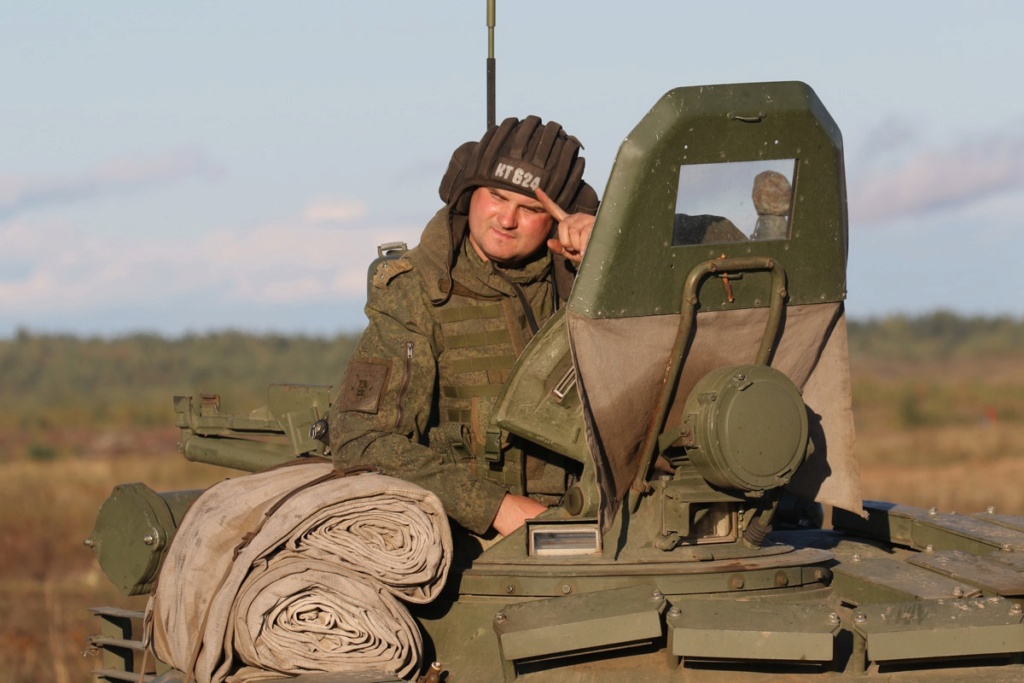 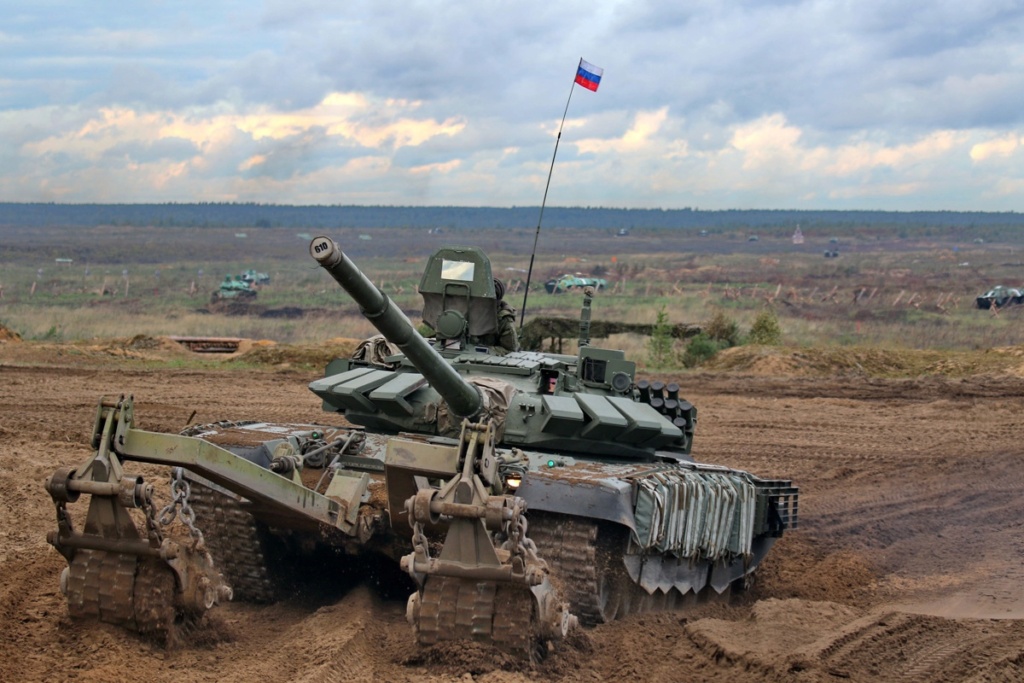 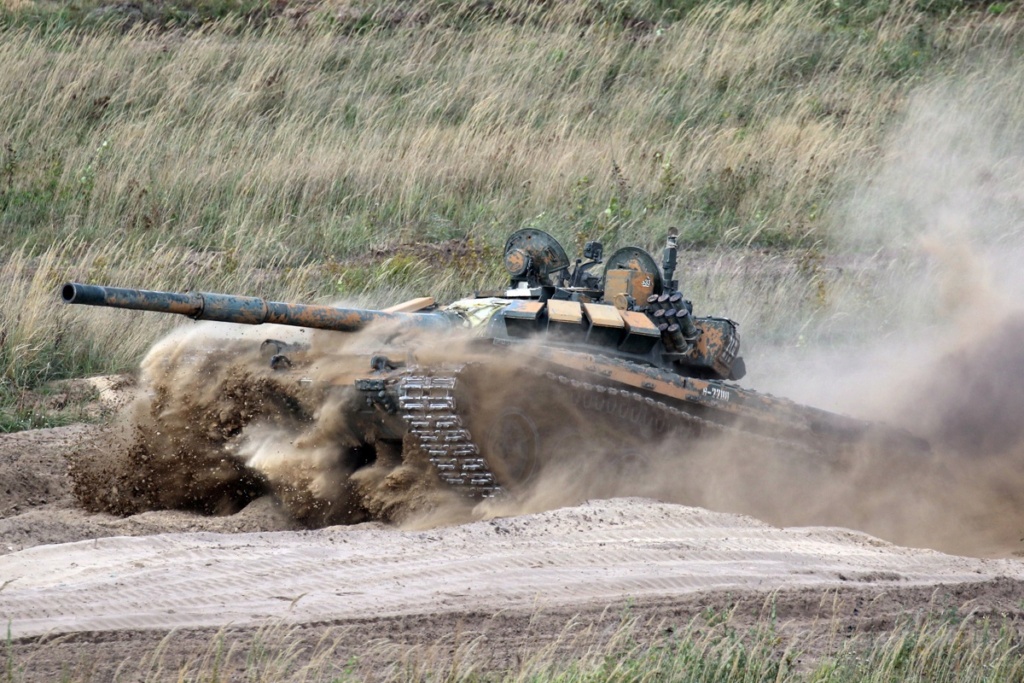 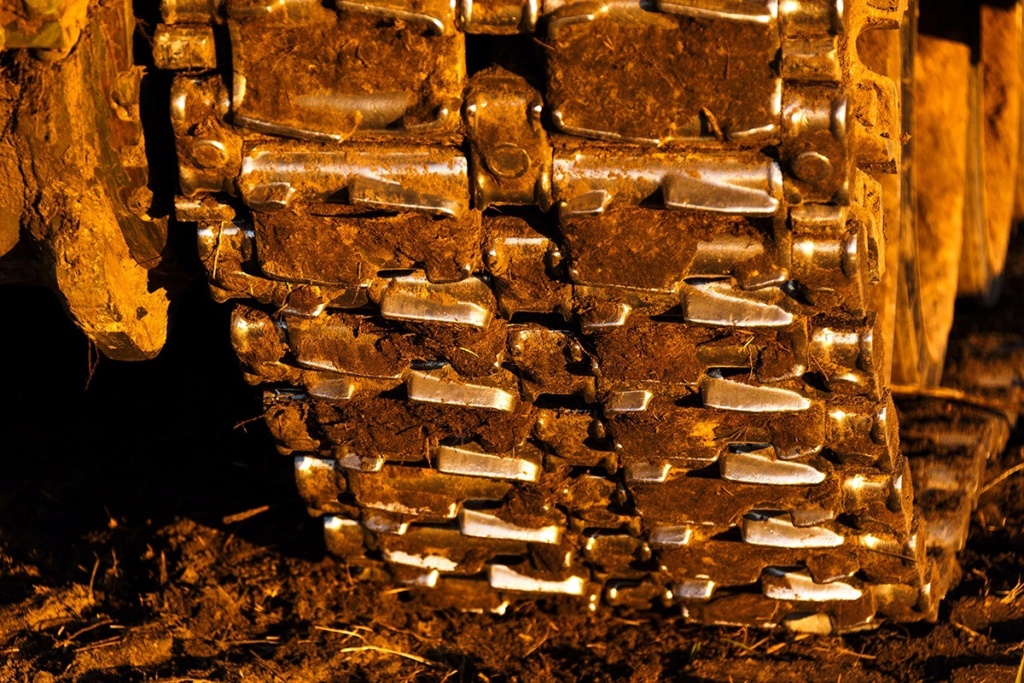 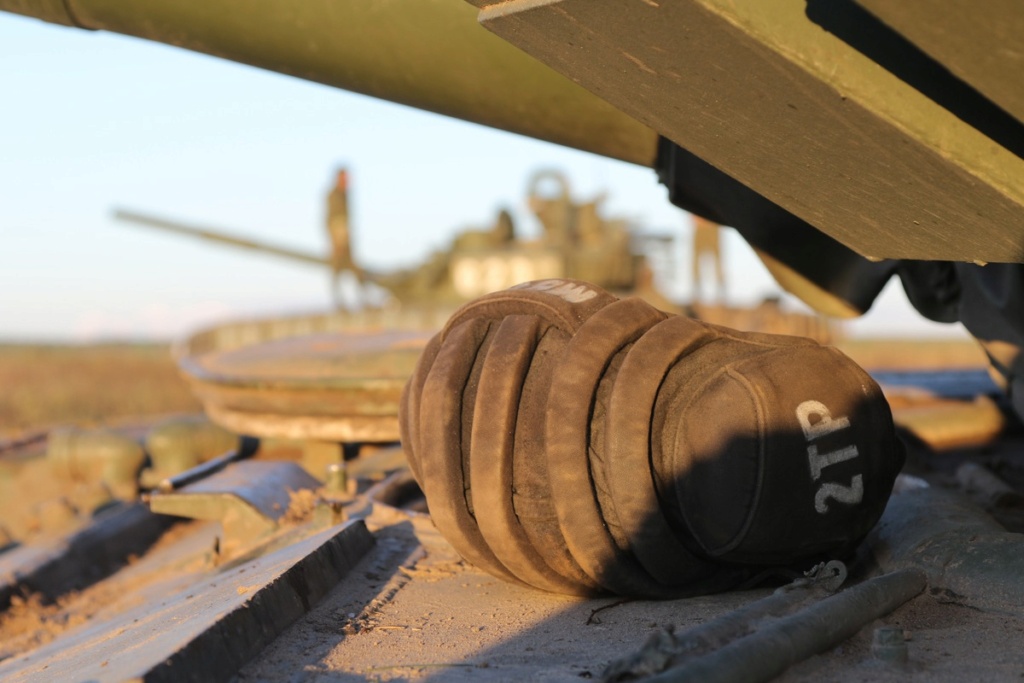 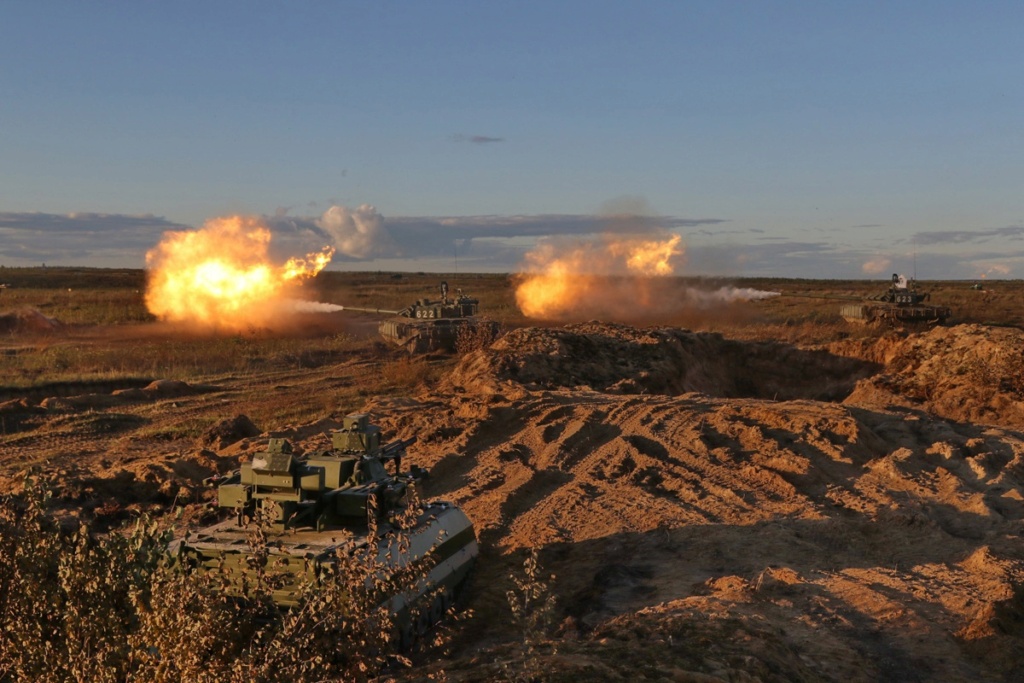 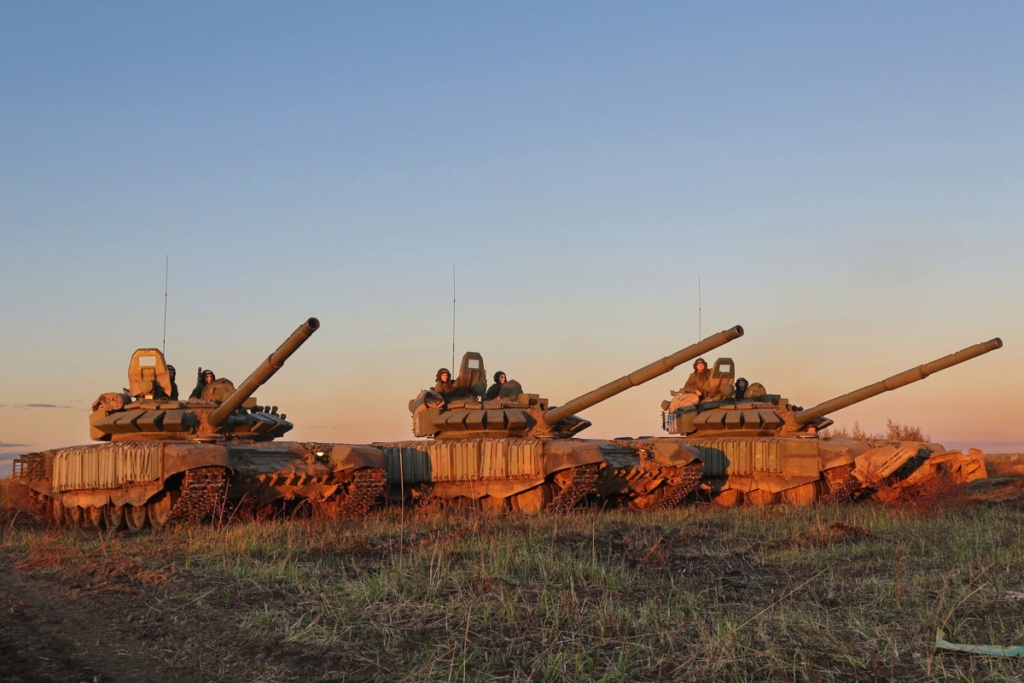 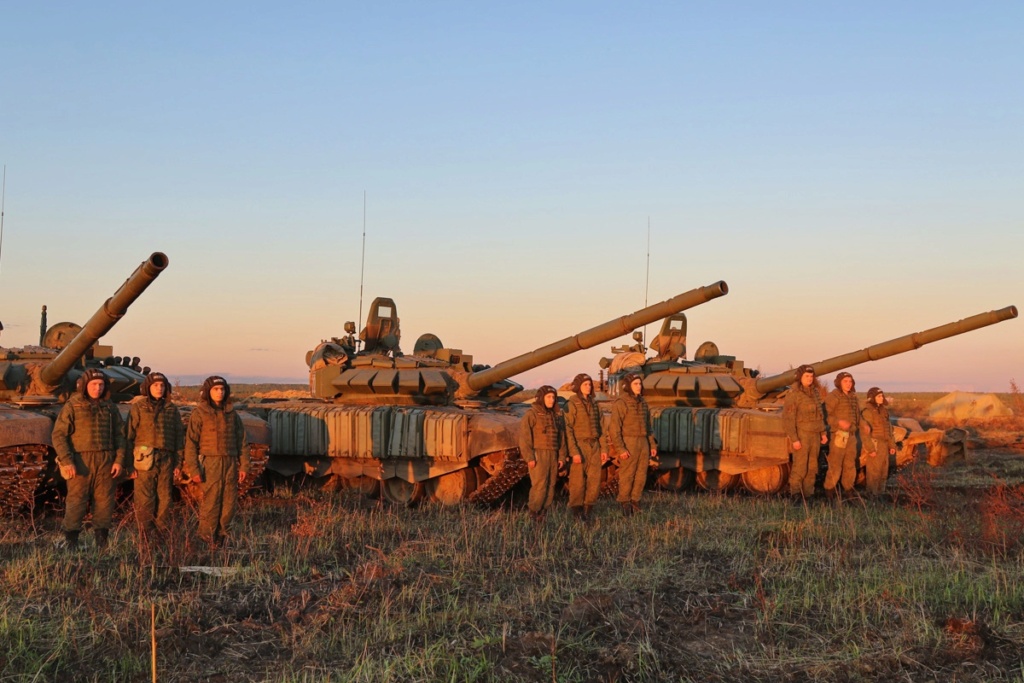 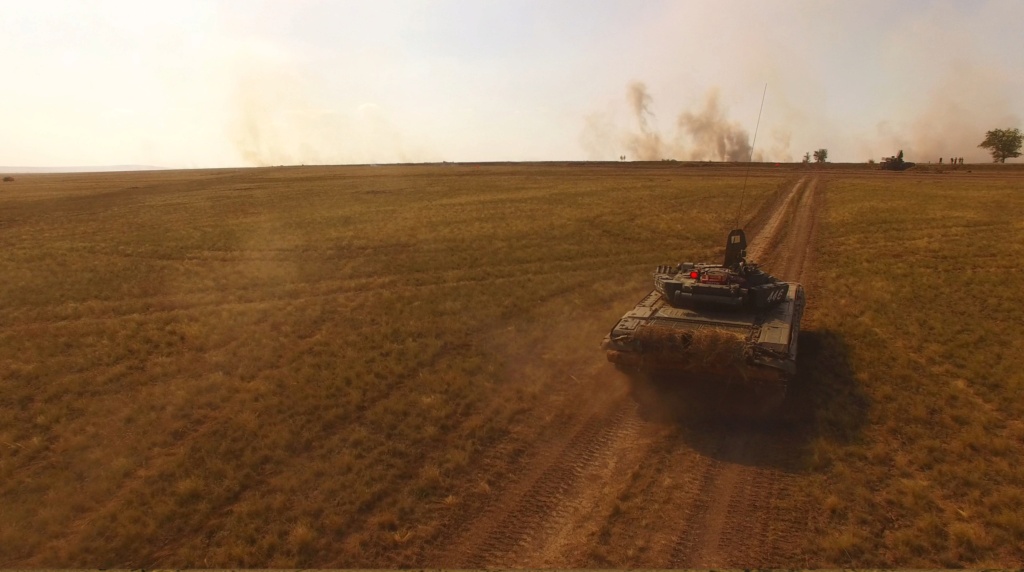 Still don't get the solution they reached for the top-mounted machine gun. Which can at least on the T-90 be operated remotely (not sure about latest T-72 modernizations), so you won't necessarily even see if there is an obstruction to turning it

It would be better to rig the top cover so that it turns along with the machine gun rather than with the turret.

Well this is the first major exercise after the situation in NK, and to be fair this is not something developed over a very long period in a lab with complex optics or electronic components... this is four metal poles attached to the turret top... possibly wielded to something that is removable so they can put it on and take it off if they need to and a couple of mesh frames on top... and I suspect the purpose of putting it on some vehicles in this exercise would be to work out how much of a pain in the ass it could be operationally.

Does it get in the way of the MG, the optics, the self defence systems... is it a problem when spotting aerial targets or engaging them with the roof mounted HMG... the HMG is often described as a weapon for use against light aircraft and helicopters that stray in close... does this mesh screen effect that.

How strong does it need to be.... this is metal with reasonably thick struts and mesh structures... would it still work if it was made of plastic... could it be made semi transparent?

Does it interfere in the view for the APS system looking for diving top attack weapons like Javelin... I would expect it would be cold even when the tank is running hot so it might block the view for Javelin of the turret top and potentially the engine deck which could be a hidden advantage.

On an exercise there new Mi-28NM and Ka-52 attack helos can get a look at these tanks and see how this effects their visibility.

Penetration tests can of course be done in the lab, but is this a pain in the ass and therefore likely to be "lost" as soon as possible in real combat because it is more trouble than it is worth can only be determined by giving it to troops with a job to do and to watch them and see how they get that job done.

I think the role of the top-mounted MG as an anti-aircraft weapon is mostly defunct.. although having said that it can still be quite useful for UAVs assuming a remote-controlled weapons station with optics for the commander as in the T-90.
With the RCWS the commander can engage a light target as soon as he spots it without having to direct the gunner thereby lowering the reaction time and keeping the heavy firepower pointed in the direction its needed

With just the pintle-mounted MG, it's mostly just a self-defense weapon for the commander when he's out of the hatch, which is not going to be during heavy combat but rather reconnaissance or movement

For the T-72s it's probably not that important, but this solution is a no-go for the T-90 series
GarryB

GarryB Yesterday at 3:39 am

This is just the Mk 1 early prototype... I am sure they could develop it further and improve the layout to allow the HMG to be used... how often would it be used nearly vertically anyway?

This is another option that might be fitted if intel suggests there is a need... they might get it to a point where it has three pole positions that could be attached to mount it... it probably could be done in less than 10 minutes... in Syria it might be worth it just to provide shade for the crew and stop the turret getting so hot in the midday sun.

In Siberia it might fill up with snow and provide excellent camouflage from above with IR systems.
Russian_Patriot_

T-72B mod.1989, restored after testing in the United States. 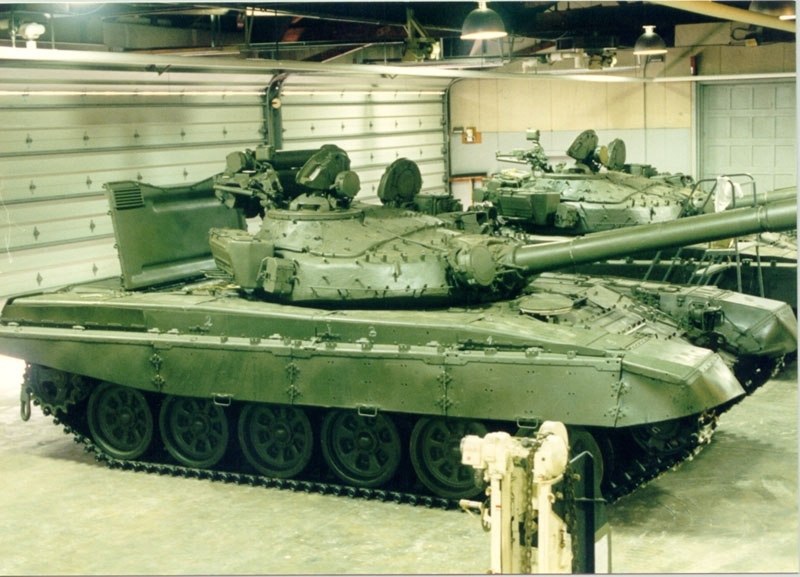 Were they recently tested in the US or is this from the 90's tests?
Russian_Patriot_

Mir wrote:Were they recently tested in the US or is this from the 90's tests?