Kinzhal would probably be too big for the Su-34 to carry.

Smaller unit under development for the Su-34 and Tu-22M3 to carry.

Testing of a new small-sized hypersonic missile "Ostrota" for bombers should begin next year, .......

Smaller version of Kinzhal as in solid fuel missile?

Better to trim down Kinzhal for mass use

The modernized Su-34M received partial attack aircraft capabilities
Today, 07: 51
65
The modernized front-line bomber Su-34M will be able to partially solve the tasks of the assault aviation... This was announced by a source in the defense industry complex.

The new armament allowed the Su-34M to partially take over the assault functions, which is very important against the background of the obsolescence of the only Russian Soviet-designed Su-25 attack aircraft. According to a source who cites TASS, there is no new aircraft to replace the Su-25 yet, so it was decided to implement part of its capabilities in a modernized version of the Su-34M bomber.

Upgrading the Su-34 to the level of the Su-35M includes updating the avionics, installing high-precision weapons and a set of several suspended reconnaissance containers. The modernization program was developed back in 2019 as part of the Sych R&D project. For the Su-34M, three interchangeable suspended containers with reconnaissance equipment were developed and tested, significantly exceeding the capabilities of the built-in equipment.

In total, by 2027, the Ministry of Defense plans to receive 76 modernized Su-34Ms of a new construction, in the future it is planned to modernize the entire fleet of Su-34s in service to the level of Su-34Ms.

The Su-34 is a Russian multifunctional fighter-bomber designed to deliver air strikes against enemy ground targets in operational and tactical depths in conditions of strong opposition. It belongs to the 4 ++ generation and allows you to carry out basic combat missions without being accompanied by cover fighters. The flight range is up to 4 km, the maximum speed is up to 000 km / h, and the combat load is up to eight tons. 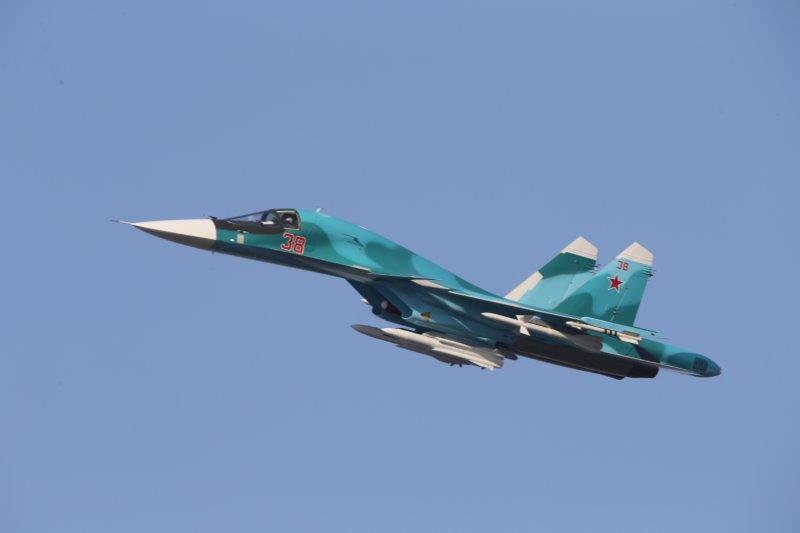 Isn't the first picture a MiG-31? And the Su-34 in the second one is carrying an X-31 or related variant.

In terms of beauty, this airplane gives the 57 a run for its money.
mavaff

Yeah I had the same doubt after looking better at the pics. Nevertheless the article was clear about being 34M.

Here the source but it's in Italian:

It looks like the bottom of a MiG-31 to me.
GarryB

In terms of beauty, this airplane gives the 57 a run for its money.

After a good 3-4 decades of MiG-29s and Su-27s I have a better appreciation for the older types and what they could do... my views on what is pretty or attractive have changed dramatically over the decades.

Of course a bit of knowledge helps especially when explaining the different types and shapes and design choices like the Mi-28 and Su-25s... when you realise the advantages their shapes bring then it is easier to forgive their less aesthetic shapes... but the Fulcrum and Flanker shapes do remind me of sharks.

In fact in the late 1980s I thought tube planes were boring, but now I have a new appreciation of that generation of aircraft.
Atmosphere

Yeah once you put into perspective the functional side of those shapes you could see the underlaying beauty of it, true.
GarryB

It was the low drag shape of the MiG-21 that made it so affordable and capable, but it is also interesting to look at the evolution of wings from the very first jets which were normally propeller driven aircraft with a jet engines fitted with straight wings like the MiG-9, then they went to swept wings as the engines got more powerful like the MiG-15, but supersonic speeds required an even greater sweep in the MiG-17 and MiG-19 but that level of sweep required too much runway for takeoff and landing, so three alternative solutions were tested... the tailed delta wing on the MiG-21, swing wings on the MiG-23/27, and lift jets on the Yak-36/38.

The next generation in wing technology was the MiG-29/Su-27 type wing that modified the delta wing to include body lift without extreme sweep that required long runways.

Taking a low drag body like an Su-7 or MiG-21 tube and fitting it with current model wings would not be hugely effective because the lifting body really requires two spaced engines to generate a decent level of body lift and the thin wings to allow supersonic flight really would not allow a thin tube body to carry a useful weapon load internally either... but it is interesting to look at the wing layouts and planforms as fashion does play a huge part in aircraft design and technology.