TR1 wrote:Must have been some weather conditions to stop an all weather plane.

Most likely they just aren't taking any chances. It's not combat, it's just a delivery flight. No need to potentially risk the airframes.
GarryB

Was going to make a joke involving lots of top Polish officials in the number two seats of these planes insisting on landing, but decided it was in poor taste.

Certainly these aircraft would actually prefer to operate in the worst weather possible as it would make them safer, but that is in combat... in peace time it makes them less safe as Sean has pointed out and it clearly has been determined not worth the risk.

...the number of helicopters lost to bad weather in mountains on routine or not particularly necessary flights would probably frighten anyone who bothered to try to work it out.

Simply not worth risking the crew or the aircraft.
TR1

Well, the grey Su-34s arrived. And they are uggggggggggggly.
GarryB

If you are referring to paint job, I wouldn't get too upset... the manufacturers have a history of painting planes with whatever colours they have at hand... if they are that bad a new coat will fix everything.
George1

Su-34 production will also include any reconnaissance and ELINT variants?
GarryB

I think recon, and ELINT support might be part of their primary mission.

We have seen mockups of Su-30s with various jammers and large central pods, which could certainly be fitted to Su-34 where needed...
Austin

But probably they need to adopt a better cammo like the light grey of IAF which is supposedly less visible.
GarryB

The dark grey on top makes a lot more sense than blue... I mean just think about it for a second... this aircraft will be used preferably at night in bad weather and will be flying low and fast in the dangerous portions of its flight.

Looking down for a low flying Su-34 from an interceptor a dark gray colour will be much harder to spot that a bright blue coloured aircraft.

Equally from the ground the dark gray of the top wont be very visible, certainly not as visible as the underside of the aircraft.

This would be ideal camouflage for aircraft sitting on runways as they will be hard to pick out from the actual runway.

The added advantage is that a few features painted on the runway will look like aircraft too.

For Su-34 I find very interesting, that it doesn't have outside visible RWR detectors, MAWS and other ESM systems like with Su-27SM or Su-35. It seems they are all build inside plane and large tail bum could also host jammers and ELINT equipment for self defense.

Anyone see any picture of serial Su-34 with large center pylon jamming pod? They usually have only two jamming pods on wing ends. With all three jamming pods and anti-radar missiles Su-34 is very capable escort jammer and SEAD platform.
Austin

Can some one tell me why the tail sting radar for Su-34 was not opted for ,considering it has a very big and distinct sting ? 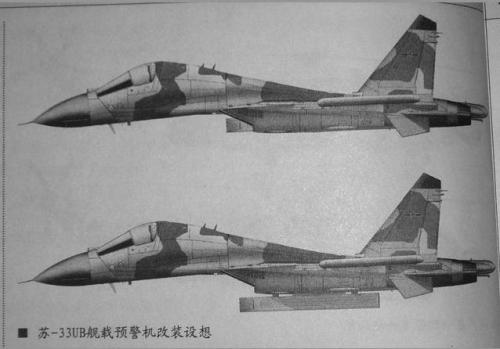 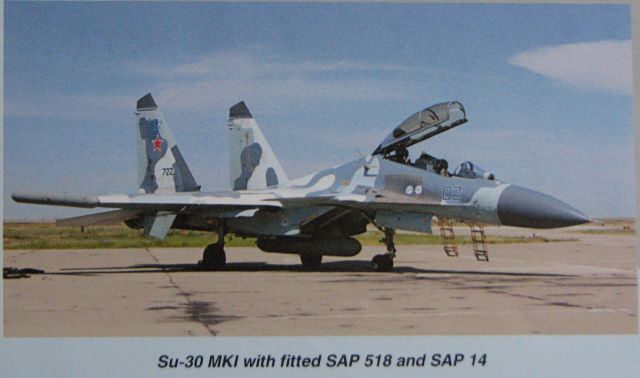 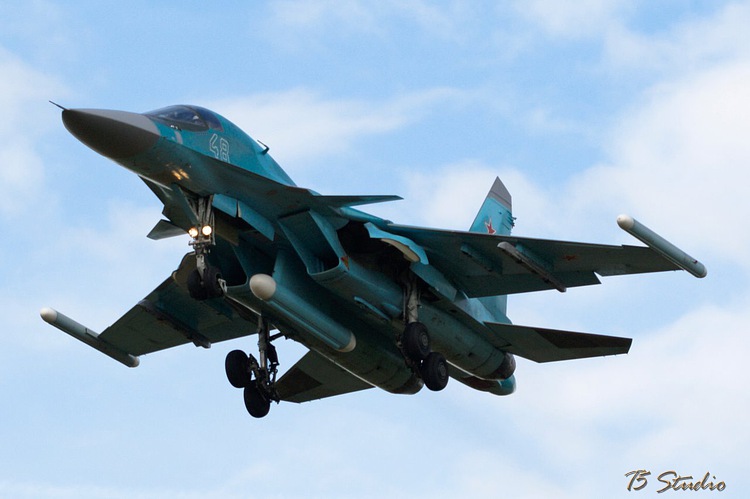 BTW AUstin, I would say, just looking at the photo below it already has a rear facing antenna, though it is hard to say what sort... 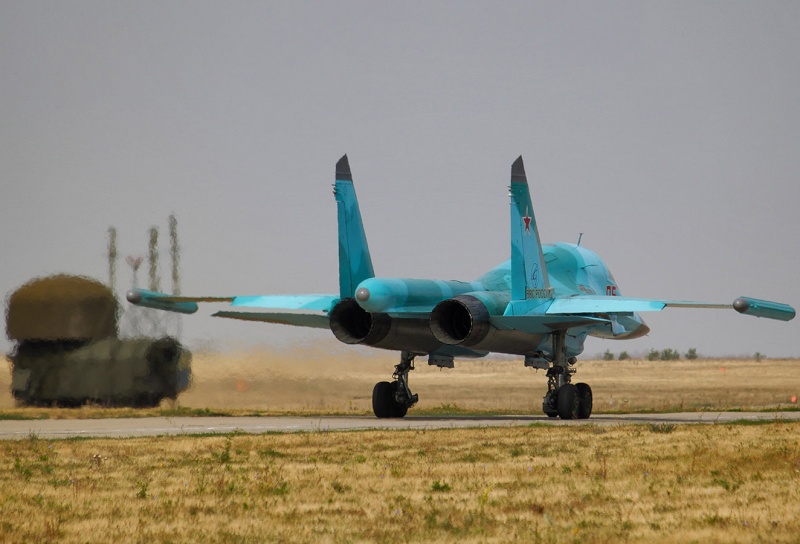 Yes the transparent radome on the tail will indicate it has some RF device , but perhaps i think they must have evaluated the rear facing radar and would have found not much use practically to get rid of tail targets , if a target if on your tail then there is something very wrong and shaking off wont be easy.

Even PAK-FA does not have tail mounted radar.
medo

It seems Su-34 must have quite impressive electronic equipment in its tail, because it have quite big cooling device or APU there for it. I doubt it have radar in its back, radome is too small, but for sure RWR, MAWS, chaffs and flares, jammer, maybe ELINT equipment, who knows. Electronic there is very important, because Russians keep it in secret and Su-34 is not meant for export, the same as radar in nose. It for sure is not the same as the one shown in nineties.
GarryB

First of all I don't know how much use an actual rear facing radar would be as its small surface area would make it a fairly limited set.

On the other hand just having a rear facing radar that just listens could be useful in detecting targets behind the aircraft because of their emissions... including incoming SAMs and AAMs etc.


Even PAK-FA does not have tail mounted radar.

The PAK FA has its braking chute on the top of its spine... leaving the rear facing tip free for all sorts of electronic goodies... most of which have not been fitted yet as we are still into the early prototypes.

It seems Su-34 must have quite impressive electronic equipment in its tail, because it have quite big cooling device or APU there for it.

AFAIK the APU is mounted in the fin root of a vertical tail surfaces with the air intakes at the base of both of the fins.

As shown in the picture I posted above it has a radar transparent dielectric covering on the tip of the tail stinger which is mirrored by similar material in the rear of the wing tip pods.

They might transmit jamming signals, or detect and analyse incoming signals from enemy radar and altimeter equipment or datalinks etc the same as the wing tip pods, except as part of the aircraft they are always present.

I rather doubt it would be used as an active radar as this would give the aircrafts position away too readily.

Of course it might be a datalink to missiles so the Su-34 can launch a missile and then turn tail but still communicate with missiles like the AS-13 and AS-18, which transmit a video picture back to the launch aircraft so the weapons officer can move a crosshair onto any target in view of the missile from 150km or more away.
GarryB

Of course the dark gray paint on top might also make dark dielectric panels and IR sensors harder to see... but the primary function will be as I stated above to make it hard to spot traveling at high speed at very low level by the main threat... enemy fighters. (the purpose of traveling low and fast and to plot courses around major radars and SAMs that are not under attack is to defeat ground defences with low altitude and speed.

It might be supported by higher flying aircraft carrying large amounts of ARMs flying fast and high to maximise ARM range and speed, plus a few AAM armed fighters and of course jamming aircraft. In the near future they could also have a few stealth fighters lurking around gathering data and hitting targets from long range. They can also deal with any enemy aircraft that get airborne to challenge them. 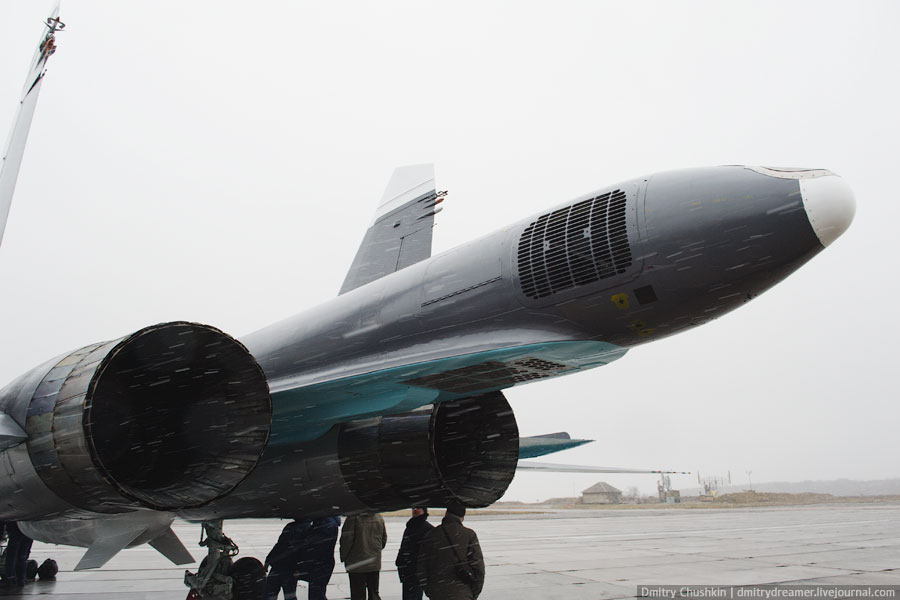 Interesting... on its own this wire mesh exhaust would not be very effective as because of the air flow little air would enter, so I suspect this is the exit port for an air flow cooling system/APU system.

I have read that the operational models of the Su-34 got an APU to make them more independent of ground power sources, and that when the APU was fitted they added air scoops at the base of each vertical tail fin. As the APU would be mostly used on the ground the air scoops would not exactly be necessary just for an APU, so perhaps they are to increase cooling capacity for internal electronics as well as an air intake that wont suck up fumes from the APU when operated on the ground.

There seems to be sufficient space behind the APU for a radar antenna. The cockpit side of the APU seems to have an upper access hatch, though this is directly above some sort of system underneath the tail stinger and may contain flares and chaff and perhaps towed decoys and other sneaky items.

Looking at this photo there seems to be a small hatch on the top of the rear tip that I initially thought was a cover for a braking parachute: 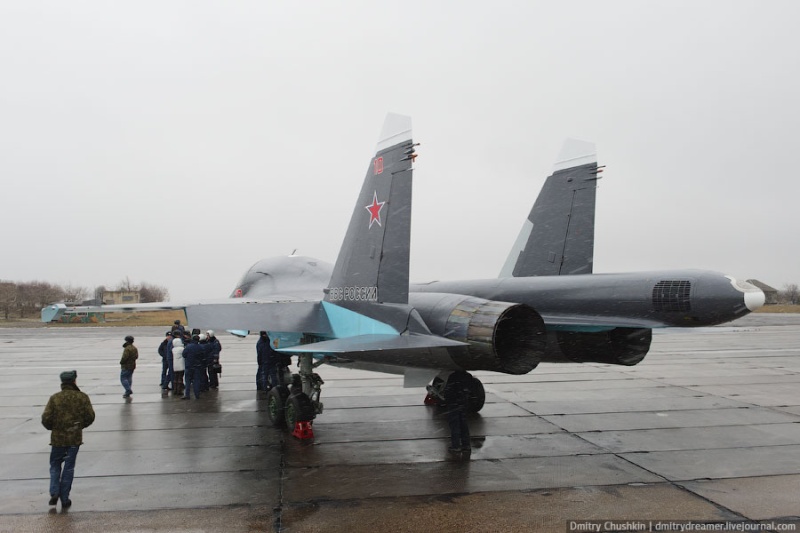 But looking at the Su-34 landing the parachute hatch is almost at the centre of the spine of the aircraft and there seem to be two chutes coming from the same hatch: 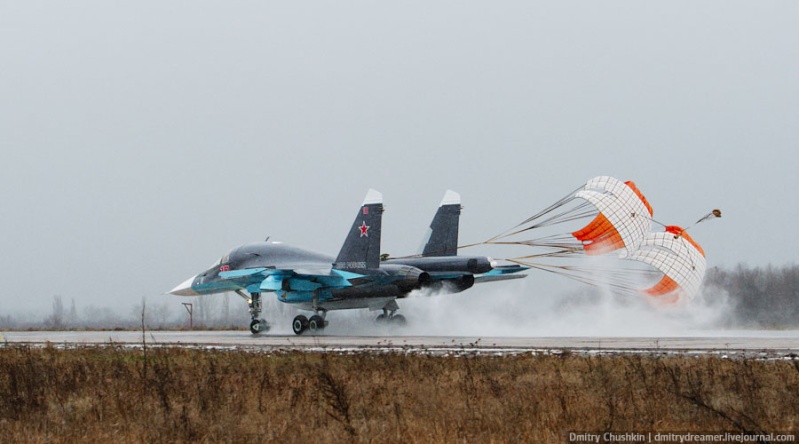 GarryB wrote:...the tail stinger and may contain flares and chaff and perhaps towed decoys and other sneaky items.

By the way, A lot of photos here: http://dmitrydreamer.livejournal.com/24772.html
GarryB

I am actually surprised they haven't fitted something like President-M self defence system with DIRCM and other protections from optical and IR guided missiles.

Flying low and fast will make the aircraft subject to MANPADS attention...

Of course in lower intensity conflicts I would expect flying at medium height would improve their chances of spotting targets and yet remain out of reach of a lot of ground fire.
George1

i think full gray, it will be fantastic camouflage
GarryB

The effect of the blue underside will obviously be effected by underwing ordinance, but the idea is generally sound.

Looking at the photos it is interesting... these planes might be new, but I suspect they have been flown supersonically already just looking at the paint wear on the leading edge root extensions in this photo: 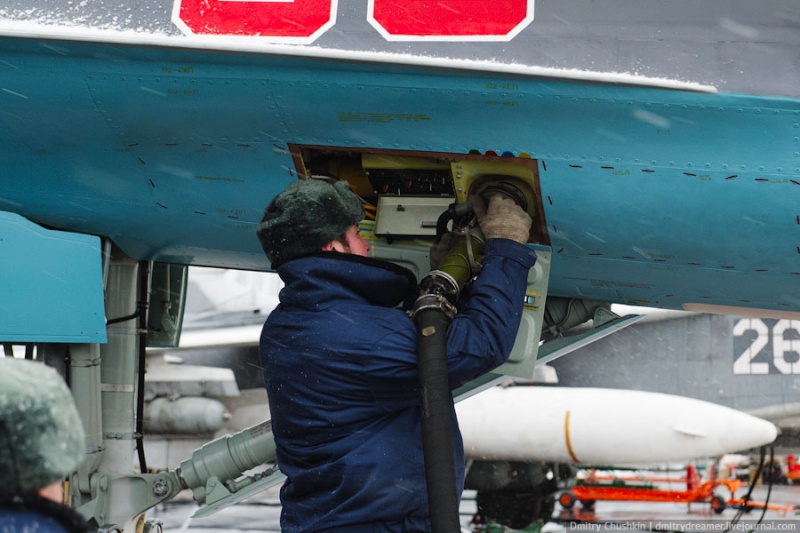 Kh-15 anti-ship cruise missile can be carried by su-34??
TheArmenian

GarryB wrote:Looking at the photos it is interesting... these planes might be new, but I suspect they have been flown supersonically already just looking at the paint wear on the leading edge root extensions in this photo:

I think that "paint wear syndrome" is called: snow

Don't know about you, but I think the new paintjob is pretty damn slick.
GarryB

It should be able to... the question is, does the Kh-15 anti ship missile actually exist.

The Kh-15 is an anti radiation missile normally fitted with a low yield nuclear warhead and is used for SEAD operations carried on Tu-22M3 aircraft. The Tu-22M3 can carry up to 10 Kh-15s at one time with 4 externally on pylons and 6 in an internal rotary launcher.

Because the Tu-22M3 is seen in the west as an anti carrier aircraft (which was one of its roles) many western experts speculated on an anti ship version of the missile... after all a rocket with a range of 250km that climbs to 40,000m and then dives on its target at mach 5 would be a tricky thing to stop as few SAMs can hit targets at that height, so it is only really vulnerable on the launch aircraft and during its high speed dive on the target.

The question is what sort of guidance could they use.


I think that "paint wear syndrome" is called: snow

DOH!!!! You are right... at the time I thought it was strange... Russian paint technology is pretty good normally.


Don't know about you, but I think the new paintjob is pretty damn slick.

It is quite a departure from normal, I would like to see more photos of it in the air before I decide, because really I like or don't like a paint job based on how effective it is, not how pretty it makes the plane look.
Sponsored content