kvs wrote:The Kiev regime was going to attack Crimea and not just the LDNR.   Sure, this sounds implausible, but we are not dealing
with a government that cares about Ukraine.
Ukraine in its Soviet borders would have lasted if it did not go off the rails in 2004.   The 2014 coup was just a coming out party.
Nobody with a clue or malicious agenda would consider the political vector in Ukraine over the last 20+ years as sane.   Russia
was forced to deal with this rotting pustule on its border.

We live 80 years after the beginning of WW2, still, the history taught is different for any country involved.
How much attention will the Russian claim about invasion attract outside Russia?
It is irrelevant, and trying to play with it will not be understood.
It would require a confession of the whole European political caste and NATO including, that they have used a country in Europe to unleash a major proxy war. Deluding it first, how strong and fraternal the friendship between them is.
Nobody will admit that openly.
Russia did what it did, because wanted and had the strength for it. Dot.
If someone doesn't like that, well ... Crimea River

UK to transfer to Ukraine from the presence of the British army a batch of Stormer HVM self-propelled air defense systems, with StarStreak missiles.

I do think Strelkov's criticisms about the lack of mobilization are valid.
flamming_python

Werewold wrote:
Russia is suffering and fighting an EXISTENTIAL war and we are already in WW3. It is a NATO vs Russia war and currently concentrated in the Ukraine, but the chances it will spread do exist and they are tip-toeing around this possibility.
Russia needs to demand a lot and these "lot" will be initiation of the End of NATO just like Putin initiated the End and downfall of the US Empire.

One drink on me once Poland or Turkey will leave/pushed to leave NATO!

We are not yet in WW3 like you say, yet we are no longer in the Old World that ALAMO purports either

There is no doubt now, Odessa operation must happen and link with Russian Moldova

But there is another problem looming near belgorod

In Pridnestrovie, due to the terrorist threat, the Victory Parade on May 9 was canceled.

Good, and tbh same with Moscow, wtf will happen if a bayraktar bombs our parade?

This is the consequences of the Kiev withdrawal

In Ukraine, they openly declare preparations for an offensive on Transnistria.

"Ukraine has the legal right to demilitarize the military facilities of the Russian troops threatening us...This will make it possible to capture Russian prisoners for exchange, eliminate the threat of a breakthrough by Russian troops, seize large arsenals of ammunition, and release two Ukrainian brigades that stand on the Ukrainian-Moldovan border," said Butusov, one of the main military-political propagandists.

So wtf, time is not on our side , there is some urgency here

The message is for China and India only, but this must happen

And they're bombing Odessa bridges as we speak

Zatoka Bridge has been hit

In Pridnestrovie, due to the terrorist threat, the Victory Parade on May 9 was canceled.

Good, and tbh same with Moscow, wtf will happen if a bayraktar bombs our parade?

This is the consequences of the Kiev withdrawal

Victory parade can wait IMHO, it would be bit tasteless to have a parade, but a controlled commemoration. Blame it on covid.

zorobabel wrote:I do think Strelkov's criticisms about the lack of mobilization are valid.

We are not yet in WW3 like you say, yet we are no longer in the Old World that ALAMO purports either

Well, I would say the same, but with slightly different words.
The situation is neither as good nor as bad as described by committed sources, even if they want to do their job fair&honest.

And I suppose that the goals of the operation are clear to anyone now - yet those are not the same ones the Russkies had at the beginning.
Each time I encourage anyone to hear carefully what Putin is saying. He draws this scenario long before the war. If Ukraine won't stop behaving like a madman, it will cease to exist in its known territorial structure.
And if they will do even more stupid things - they will cease to exist as a country.
As easy as that. Openly stated a long, long time ago.

As for details, for example, there must be a balance between not showing melted Ukrainian soldiers, and showing them in the numbers we have now.
It is a bloody meatgrinder, and ordinary people with sane minds are starting simply to feel pity for them.
I see dead bodies of guys in their late 40s, unequipped, unarmed, with a mix of civilian clothes and some military ones ...
That is a picture of misery and defeat.
On the other hand, I know that those pictures are not presented to the zombified Ukro nation, and those poor bastards really believe that they are winning.
Still, it does not matter, because even if you will present them with bloodied personal documents, they will consider those as Russian fakes. That is the level of brainwashing. So they really need tons of dead corpses scattered into pieces to ignite some common sense, delivered by the orphans, widows and family members looking for the remains buried with no names somewhere in Lugansk

The other case is the propaganda attacks on Russian soil. We all know, that those are suicide missions in most of cases, and they will run out of assets very soon. Russkies are closing the corridors at the moment, with Odessa and Dnestr being taken soon, a two whole directions will be cut.
The only resupply route will be via Poland and Slovakia, as Hungary closed the border for military assistance. That is about 400 km, with few roads and railways - possible to cover from Belarus. Connecting Transdnestria opens some new possibilities either.

At this point shouldn't leadership of Ukraine become targets? Zelensky is an impediment at this point and at least the minsters around him should be targets...I mean...this is a war right?

I mean you could kill him but it wouldn't really accomplish much, in a war defeating the opposing army is key, killing the leaders wont matter as they'll find replacements.

I would say it's because Russia hasn't declared full on war with Ukraine yet. But I would imagine that he would be open target. Mind you, I truly do not think he is in Ukraine. Along with that, I think the Russians are trying to build up a hate towards Zelensky thus keeping him alive so that view of him in sane parts of Ukraine plummet.

The main problem is both the interpretation of the elite, and the presentation they are putting forward to neutral states like China and India

Everyone knows no deal can be made, but this facade must continue to appeal to those states who will face sanctions to trade with us

But the Kremlin sees something else, and with 85% of population, the carelessness benefits them

That`s not the point.
That ass-clown should be kept alive so RF could have some "legitimate" head of state of former Ukraine to sign terms of unconditional surrender.
If and when it comes to that no acutal "Ukraine" will further be - he may be eliminated. But then again, anything gained by doing that, given that actual decisions are made by US stuff around him, might not outweight making him a martyr. It may be wiser to let him flee and fade into oblivion in shade as media persona.

Also, the political interference with the military is obvious

It's rubbish that phase 2 would include a storm in donetsk

In this case we could have maintained the positions we had in phase 1, because it never was a question of manpower

And we would have held Sumy, Chernigov, Kiev, and the rest of the north

So it was a political miscalculation , not a military one

All of the manpower from Kiev, Gostomel, Irpen, Brovary, and Sumy and Chernigov, is still by Belarus

It's bullshit that they are in Donetsk,

They proceeded village by village

It was a change of tactic, not increase of forces

The price is strikes on russian soil

And conducting these attacks

andwhy shouldn't ukraine be allowed to? they are at war with russia.

When you are at war, home soil is a fair target.

French MoD maps. Blue arrow for ukrainian offensives. As you can see there is none.

The stripped red and white is russian gains. 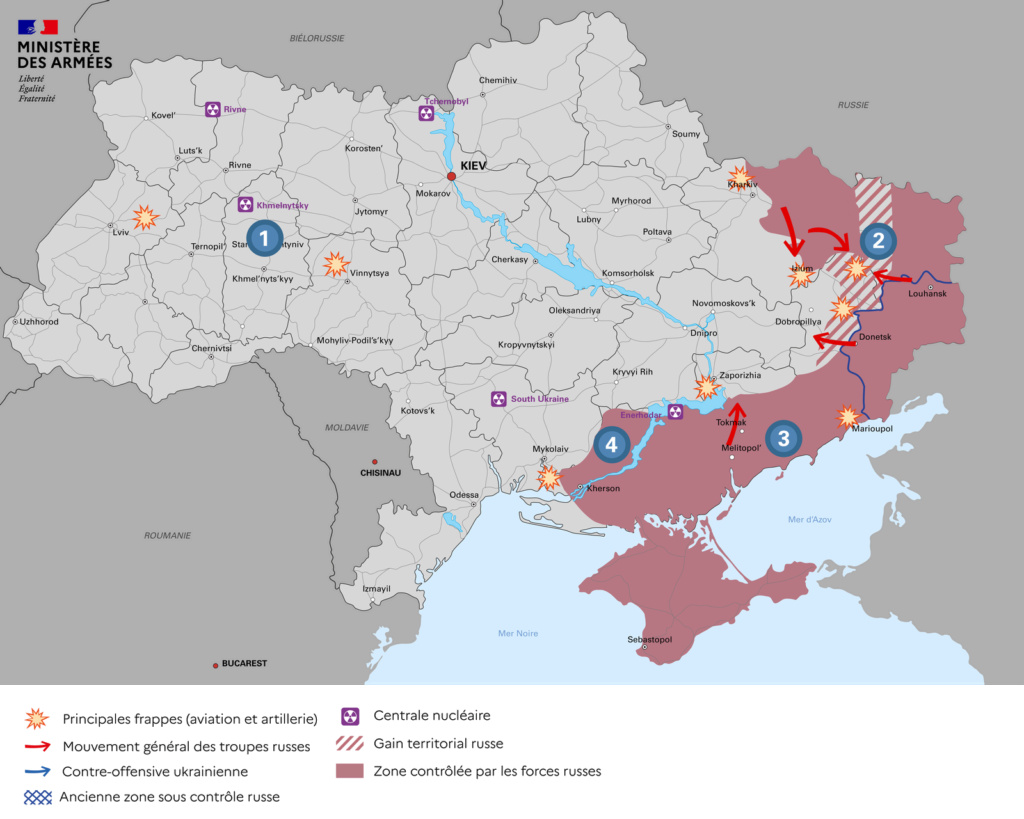 And conducting these attacks

Then it is up to Russia to protect its borders, now isnt it?

Also, maybe striking at UK shipping of these weapons as well.

Most probably majority of them are already in NATO countries like Poland or even City of London like Zelensky and his predecessor jewish oligarchs and therefore untouchable.

Like Seig said, it wouldn't change much for the situation, but they certainly need to be punished.

I guess it would be more useful for the situation to see Zelensky selling out the Ukraine so the zombified Ukrainians may have a slight chance of waking up. I know that is very optimistic. Cleansing requires a lot more time and more drastic actions. It is clear that this will not be accepted by anyone not even normal people if there are no Nürnberger Trials in the end of the operation.
Arkanghelsk

Why would I trust my life in the hands of these idiots if they conduct a mobilization?

It's like standing in the midst of a bees nest , swatting it, and just standing there

They're watching a swarm of bees come to them, and nothing proactive is done

It's only after they try assassinations, that they move

Because the life of someone like me is worth shit to them, but if it's simonyan, then bring out sarmat and Satan II

and the British are fucking laughing at it
Sujoy

US said today, they won’t rule out military action if China establishes base in Solomon Islands.

Solomon Islands is 1000s of miles from US. But [according to the West] Russia is violating "rules based global order" by reacting to NATO coming to share a border with it.