George1 wrote:Motorized riflemen of the Central Military District at night repulsed the attack of a mock enemy at the Aleisky training ground in the Altai Territory.

It was reported that they were using BMP-2's. Unfortunately video is not clear on that. This unit has been long rumoured to be one of the few still using BMP-1's.

Military engineers of the Central Military District: footage from the district's training grounds in Siberia

Took quite a while to get somewhere but good to see it finally made it!

Mir wrote:Took quite a while to get somewhere but good to see it finally made it!

The problem was that AGS-30, just like Ak-74, was really difficult to replace (still very useful/reliable and not obsolete), hence why the AGS-40 will be on experimental duty, aka placement amongst special forces specialization. Instead of fully replacing the Ak-74 they instead gave an 'evolutionary' upgrade to the Ak-74 with the the Ak-12, while the AEK-545 went to the special forces.
Mir

The 40mm cartridge makes for a more powerful weapon but the one advantage the AGS-30 has is that it is much lighter. I think the AGS-30 might stick around whilst the much older AGS-17 will slowly disappear.

Yes, the AGS-30 is not just lighter, but its ammo is also lighter and its ammo is still rather effective, if not a effective as the new rounds. 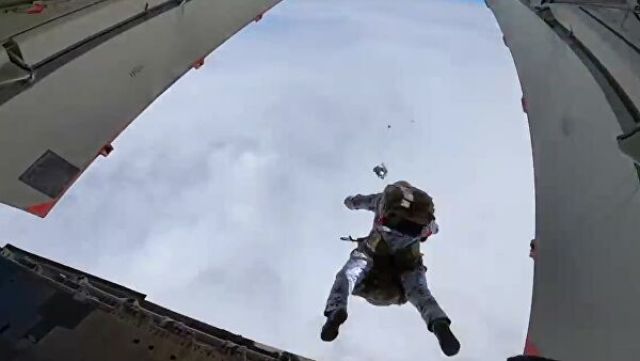 Russian paratroopers perform a group landing from an Il-76 aircraft on new parachute systems from a height of 10,000 meters in the extreme conditions of the Arctic near the Franz Josef Land archipelago. Freeze frame video.

The Russian Ministry of Defense reported that by the end of 2021, 69 new outstanding achievements were included in the Book of Records of the Armed Forces of the Russian Federation.

The Ministry of Defense recognized the world's first parachute landing of a medical military unit in full force with equipment and equipment as the most ambitious achievement of last year. It, we recall, took place in August 2021. The personnel of the mobile hospital of the 98th Ivanovo airborne division were then involved in the experimental exercise in the Kostroma and Ivanovo regions, which the command of the Airborne Forces organized on behalf of the Minister of Defense Sergei Shoigu

This unique operation involved 17 aircraft. Having traveled a little over 100 kilometers, Il-76 aircraft successfully landed about 160 medical personnel of the hospital, 14 units of armored and automotive equipment and 25 P-7 platforms with cargo in 30 minutes to the Budikhino landing site in the Kostroma Region. 24 platforms - with medical property and equipment. One is for food. After landing and gathering at the landing site, pneumoframe tents of the main functional units of the airmobile hospital were deployed in the field.

According to statistics, more than 60 percent of "military" records were set by soldiers and officers in combat training classes and at international army games. Another 40 percent of the 2021 records come from special missions excellently performed by the military.

For example, during last year's expedition to Alexandra Island in the Franz Josef Land archipelago, they set 7 records. Among them is the equipment of an ice airfield in the area located above 80 degrees north latitude. And also - the world's first parachute landing of a group of rescuers into the open sea in the northern latitudes with the help of a small marine landing complex. Fighter flights to the North Pole area with its crossing also got into the Book of Military Records.

The 2B25 Silent Spigot Mortar

Signal for its own: how anti-interference satellite dishes work

The compact satellite antennas developed in Russia for military equipment allow access to GLONASS satellite navigation signals even in conditions of their complete electronic suppression.

- Now there are very compact solutions in terms of antenna arrays - including portable ones. They work effectively in difficult conditions. Instead of a conventional antenna, you can give a soldier a special one - the same size, weighing 50-60 grams - and it will ensure the reception of a navigation signal under interference conditions, - Ashot Oganesyan, deputy director of VNIIR-Progress, told TASS on the sidelines of the conference taking place in Suzdal " Navigation".

- Suppose there is a task in a certain region to restrict access to open navigation signals for terrorists and militants. This can be done by setting up a powerful source of interference that suppresses all navigation satellite signals, - continued Oganesyan. - And their own forces and means use noise-resistant adaptive antennas. Thus, in a certain region, the exclusive right of law enforcement agencies to satellite navigation signals is realized.

For the Russian army will create a navigation system, protected from interference

The Topographic Service of the Russian Armed Forces will carry out more than 20 research and development projects to create noise-protected navigation aids. They are planned to be completed by 2030.

This was announced by the head of the Military Topographic Directorate of the General Staff of the Russian Armed Forces, Major General Alexander Zaliznyuk, Interfax writes . Military scientists will also develop specialized navigation equipment for consumers of individual use for missile forces and artillery, airborne troops and aviation.

Thanks to these works, it will be possible to achieve the promising requirements of the troops for navigation support for the next decade.

The relevant document appeared on the official Internet portal of legal information.

"For mass heroism and bravery, fortitude and courage shown by the regiment's personnel in combat operations to protect the Fatherland and state interests in armed conflicts <...>," the document says.

On May 30, Vladimir Putin awarded the honorary title "Guards" to the 24th separate special purpose brigade.

It is noted that the honorary title was awarded for " mass heroism and bravery, perseverance and courage shown by the brigade's personnel in combat operations to protect the Fatherland and state interests in armed conflicts."

On April 18, Putin awarded the honorary title "Guards" to the 64th separate motorized Rifle Brigade for heroism and bravery.

President of the Russian Federation Vladimir Putin awarded the honorary title to the Guards 2nd separate Special Purpose Brigade and the 17th Army Aviation Brigade. The relevant decrees of the head of state were published on July 11 on the official portal of legal information.

The documents specify that the honorary title was awarded "for mass heroism and bravery, fortitude and courage shown by personnel in combat operations to protect the Fatherland and state interests in armed conflicts."

Prior to that, on May 30, the President of the Russian Federation awarded the honorary title "Guards" to the 24th separate special purpose brigade, and on April 18-to the 64th separate motorized rifle brigade.

NOTE: this unit was claimed to have been wiped out, back in March by the Ukrainians.

Must have been reformed

Good training for such a short period


FACTBOX. On August 13-27, 2022, the 8th International Army Games (IAG-2022) will be held at the military training grounds in twelve countries: Russia, Azerbaijan, Algeria, Armenia, Belarus, Venezuela, Vietnam, Iran, Kazakhstan, China, Mongolia and Uzbekistan. The IAG is a series of field combat training competitions for military personnel from Russa and dozens of other countries.

The Russian Defense Ministry is the Games’ organizer. During the Army Games, soldiers and officers representing different arms and services demonstrate their skills and abilities. Russia is represented by units that emerged the winners in the latest domestic national army contests that put to test their professional skills. As a rule, the equipment for the Games is provided by the host country, where a particular context is held. For example, most of the participants in the tank biathlon use Russian tanks, while Russian military contestants in China performed in a number of competitions using Chinese equipment. At the same time, China traditionally participates in competitions in Russia and other countries with its own equipment.

More than 260 teams from 35 countries will join the 2022 Games. The two newcomers are Bolivia and Rwanda.

In 2013, Russia hosted international competitions for tank crews called Tank Biathlon and for air pilots Aviadarts. Both aroused great interest in Russia and abroad. After their success, the Russian Defense Ministry decided to arrange a kind of army Olympics, aimed at bolstering the combat capability of the Russian army and strengthening international military cooperation. For the first time, the Games were held on August 1-15, 2015 at eleven military training grounds in Russia, with 56 teams from 17 countries taking part: Azerbaijan, Angola, Armenia, Belarus, Venezuela, Egypt, India, Kazakhstan, Kyrgyzstan, China, Kuwait, Mongolia, Nicaragua, Pakistan, Russia, Serbia and Tajikistan. Iran, Vietnam, the Republic of Korea, Myanmar, Turkmenistan and Brazil attended the IAG as observers. The program included 14 competitions on land, in the air and at sea. In the overall medal standings, Russia placed first (31 gold medals), China second (three golds), and Belarus, third (one gold).

Since then, the International Army Games have been held annually, and since 2016, not only in Russia, but also at training sites in other countries. In the team standings Russian contestants excelled on all occasions. China won second place five times, and Belarus and Kazakhstan, one time each. The program and list of competitions have changed several times.

In 2022, the International Army Games program consists of 34 competitions, including the Tank Biathlon - a competition for tank crews. Its stages: individual race, sprint, pursuit and relay race were borrowed from ordinary biathlon. Since 2013, it has been held annually at the Alabino training ground near Moscow. Twenty-one countries will take part in the competition this time: Russia, Abkhazia, Azerbaijan, Armenia, Belarus, Venezuela, Vietnam, Zimbabwe, Iran, Kazakhstan, Kyrgyzstan, China, Laos, Mali, Mongolia, Myanmar, Syria, Sudan, Tajikistan, Uzbekistan and South Ossetia (the list of participating countries was taken from the official website of the Games as of August 12). Most competing crews use T-72B3 tanks provided by the organizers.

Russia has developed a new mobile control system for artillery, mortars and MLRS "Planshet-M-IR", the state corporation Rostec showed the work of the new complex.

The new complex was developed on the basis of the Tablet-A complex, adopted by the Russian army in 2019. As explained in the state corporation, Tablet-M-IR is a more modern version of the complex and is designed to automate the control of artillery, MLRS and mortars. It interfaces with various reconnaissance means, including drones, and allows you to receive information in real time, process it and transmit coordinates to hit targets.

"Tablet-M-IR" was developed on the basis of the "Athlete" armored car, but can also work outside of it.

The equipment is a compact wearable complex compatible with all types of Russian UAVs, and is also integrated into other control systems. "Platet-M-IR" is planned to be placed on the basis of the "Athlete" cross-country armored car. This will increase the mobility of the complex and expand the possibilities of combat use.

- says the description for the video.

The complex is able to work with guided missiles "Krasnopol" and "Kitolov" and direct them to the target.

Hoping to see this in operation in the SMO, so they can use UAV information in real time. With further development and saturation of optical/radar reconnaissance means in the air, it may get pretty difficult for an enemy to raise their heads without having an incoming shell or rocket in a matter of minutes or seconds. BTW there are some nice videos in the link.