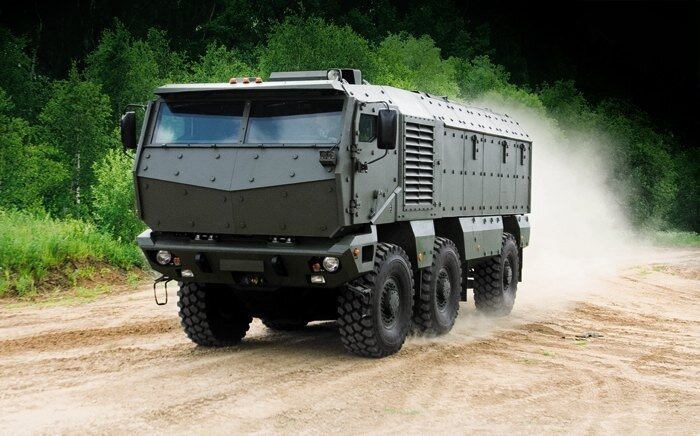 A while back there was a discussion about buying cheap BTRs for use in a post apocalypse survival scenario.

If your budget can stretch this sort of vehicle would be much better for such a purpose.

It has a Mad Max look to it.

(Mad Max was a series of three Australian films set in a post apocalyptic Australia... which was ideal really cause they could just film it in Sydney...

The BTR-60 has a boat shaped hull and it is not anti IED.

And just from that photo you can see how high the side of the truck is compared with the height of the axles... I would assume a V shaped hull to pull that off.

What do you think the bolts are for?
Pugnax

Garry i was merely reflecting that a v shaped boathull construction seems to be the most survivable design,S.African Apcs are very successful as is the Lav design.Entire wheel assemblies get blown off but crew survival is very superior to a flat bottomed BMP/BMD or early BTRs.

If you look carefully at the photo... particularly the gap between the front wheels and how the front set of wheels with their axle are low enough to hide the second set of wheels from the angle the photo is taken suggests to me very low set wheels and a very low set axle.
Now look at the side of the vehicle, which seems very high compared to the axle line of the wheels.

Combine low mounted wheels and axles with high mounted body and when you join the dots you get a V shaped hull...
Pugnax

Pugnax,GarryB while we are at this discussion please check this post

The first photo posted was not a good angle to see really.

Thanks for the extra photos Austin... even from the side and rear there is no obvious V shape... we would need a shot from the front from low down, ...not that I am having second thoughts BTW

The high profile of successful anti-mine boat hull designs is what first made me skeptical.The philosophy of low vis/profile units pervaded the Soviet era and into the Russian era as well.The high boat hull flips over easily,indeed many of CDN Lav casualties are reported linked to roll overs at speed on thoroughfares.Maybe a new technology can disipate shock and trauma,allowing for a lower profile to be utilized ,ie a liquid shock absorber insert?

I know many in the west criticise the BMP-3 for its layout with the strange exit setup at the rear where they have to open a set of doors and then a set of roof hatches and then the main back doors to get out because unlike the BMP-1 and BMP-2 the engine in the BMP-3 is mounted in the rear and the exit tunnels/trenches basically allow the troops to escape out the rear over top of the engine.

The reason was amphibious capability.

In the earlier BMPs the frontal armour was designed to stop 20mm cannon rounds from 100m or more so the frontal armour was about 40mm of steel equivelent. This means the engine could be mounted at the front of the vehicle on the right hand side with two crew positions on the left hand side... the front position is the driver and the rear position is the commander with the gunner in the single person turret. In practise however the commander often kicked the gunner out of the turret so they could sit in the turret and get an all round view, though it meant they had to operate the weapons... which clearly was not ideal.
The BMP-2 had the same layout except the turret was enlarged to hold two crew side by side... the commander and the vehicle gunner. This meant another soldier could sit in the front of the vehicle beside the front mounted engine and behind the driver.

The problem was that when the BMP-3 was ready for service the much thicker frontal armour plus the extra weight of the very large turret made the front of the vehicle too heavy. Some models of the BMP-2 with extra armour exhibited very poor performance in the water including nose diving into banks.

To make the BMP-3 retain its amphibious capability they had to shift the engine to the rear... which introduced the problem of how to get the troops out the rear of the vehicle... the resulting method is not ideal as they have to climb over it, but it means they keep the firepower, the extra frontal armour, and the amphibious capability.

With as many rivers and streams as there are in Russia the amphibious capability is valuable enough to keep where possible... and there is certainly no reason why a V shaped hull could not be used for an amphibious vehicle design.
Cyberspec

Came across pics of promo material for YMZ diesel engines for various vehicles, including military ones.

Hopefully they just took the BTR-82s turret as is, which means some night vision and stabilised optics too... though nothing like the BMP-3M level thermals of course

Well that is interesting...

The Typhoon is the family of vehicles for the light brigades so it seems to include 4 and 6 wheeled versions. I would suspect the artillery/direct fire support/tank vehicle will be 6 wheeled... likely 120mm mortar for light artillery and perhaps 100mm/30mm BMP-3 like armament for the fire support vehicle, and 45/57mm gun for the light tank on a 6 wheeled platform.

Both versions of Volk use a 250-300hp engine though the mobility requirements for Typhoon suggest that a 350hp for the 4 wheel and 450hp engine for the 6 wheel might result in similar total weights for improved off road performance compared with Volk.

Have seen this sort of thing on our LAV IIIs.

It captures a forward view for the squad in the back.

Normally a squad is closed up inside the vehicle and has little view of the outside and it can be a bit disorienting when you get out to find out what is happening and get your bearings so to speak.

This camera basically allows them to put an LCD screen in the squad compartment at the rear so it is like being able to sit in the front seat so they can see where they are going and where they are driving so that when they have to get out they are oriented so to speak.
medo

This small fixed camera is not a sight for armament, but a big closed tube left of machine gun pylon. Vistrel have four fixed small cameras looking in all four directions, so I think, they are more for driver or commander to see situation around the vehicle.

They could certainly be used by the driver and commander to improve external vision.

There are also some versions of the vehicle with extra armour plates that fold down over the windscreens for extra protection... during which the small TV cameras would be invaluable for viewing what is happening outside the vehicle and perhaps to provide visibility to get the vehicle out of an ambush area.

Interesting that the first photo has a BMP-2 turret with the sides of the vehicle re-profiled to its shape...

and the side shot shows the two front axles are to the front with a rear axle separated at the rear... clearly showing most of the weight is in the front of the vehicle.

The BMP-2 turret is an old model turret without the upgrades, but then considering this is a light vehicle the older sights is probably adequate, though an upgrade to the new BMP-2 turret with 4 ready to fire Kornet missiles... with Kornet EM missiles fitted this vehicle suddenly becomes rather interesting with a 10km anti aircraft capability and an 8.5km anti armour capability, plus 30mm grenade launcher and 30mm high velocity cannon...

The last few photos showing the troop transport vehicle is interesting with its one piece ramp, while the centre of the ramp seems to have a door when there is less urgency for getting in or out.

The troop transport vehicle has no firing positions in the sides but the BMP-2 turret armed model clearly has firing ports in the rear section and two rear doors.

The Anti mine body shape is pretty clear in both vehicles.

With the door open you can see it an outer plate spaced away from the next layer that seems to be quite thick though it might be ceramic rather than conventional metal.

This might be capable of stopping 50 cal standard ball rounds from 300-500m or so.
TheArmenian

My guess is that the vehicle with the more pointed nose is better protected... the engine seems to be fitted behind the cab with a door and short tunnel on one side to allow access from the crew cabin to the rear.

This means the different nose shape can only either be to improve protection, improve aerodynamics, or improve performance in water/fording or swimming.

Excellent vehicle this new Kamaz Triumph. It is now more an APC (BTR), than armored truck. I hope similar model of Ural will be on the same level.
Austin

Looking at Typhon Truck underbelly it does not have a V shape blast deflector to protect against mine ? any reason what it was not made so when it is standard these days ?
Sponsored content