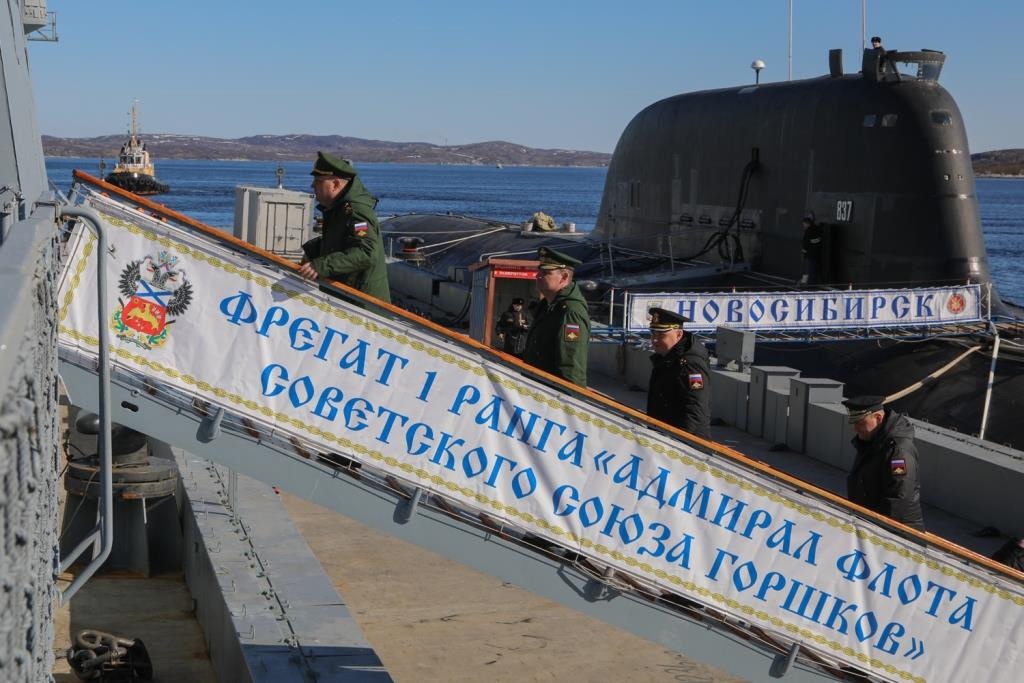 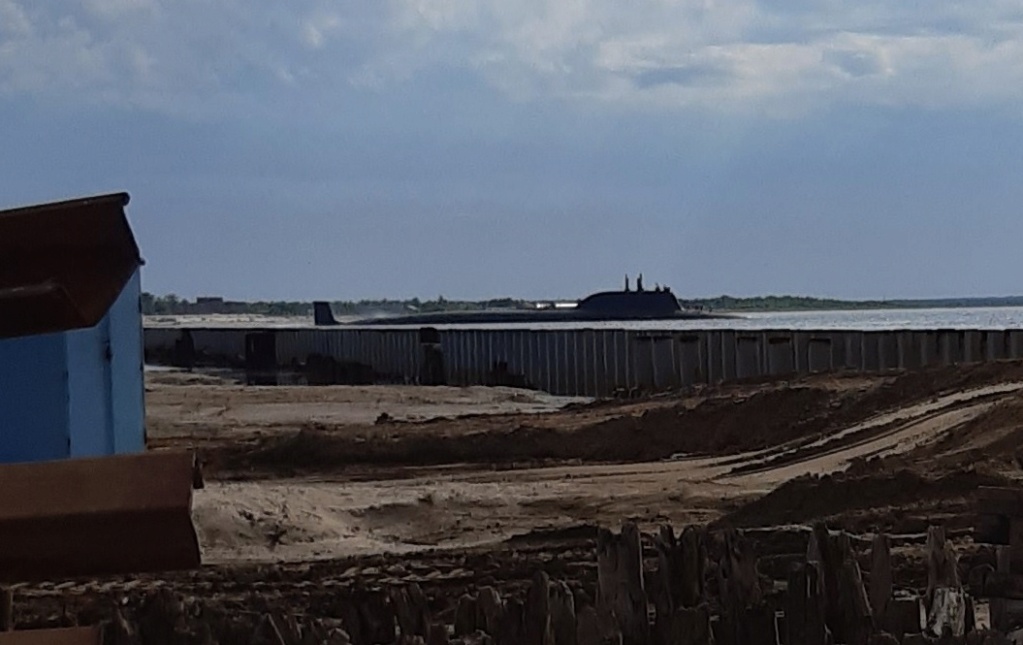 Alexander Mercouris stated on his daily vid (source) that the Russian defense ministry has announced an expansion to the submarine fleet - two more Pr 885Ms will be built, to bring the total to 11 units. Two more Borei's as well! Most excellent news if true

Anyone have a link to corroborating info?

Big_Gazza wrote:Alexander Mercouris stated on his daily vid (source) that the Russian defense ministry has announced an expansion to the submarine fleet - two more Pr 885Ms will be built, to bring the total to 11 units. Two more Borei's as well!  Most excellent news if true

Anyone have a link to corroborating info?

The Russian submarine Severodovinsk is currently sailing through the inland Danish waters with two escort ships. The voyage is planned and followed by
@forsvaretdk
. The ships are expected to cross the Great Belt tomorrow early. They are on their way to the celebration of Navy Day in St. Petersburg. #dkforsvar

Looks like Russia needs to study their reactor cooling system for the slightest of loose barriers. Btw this is why Russian subs have the SOKS non acoustic detection systems on their subs. If you have fine enough equipment it only requires a part in many many millions of radiological or other materials to detect something came by your path at sea.

As I said these failures are also learning experiences and will help to get Russia to tighten up whatever is allowing even the tiniest hot atom to get through. I'm guessing the the waste heat water system.
Hole 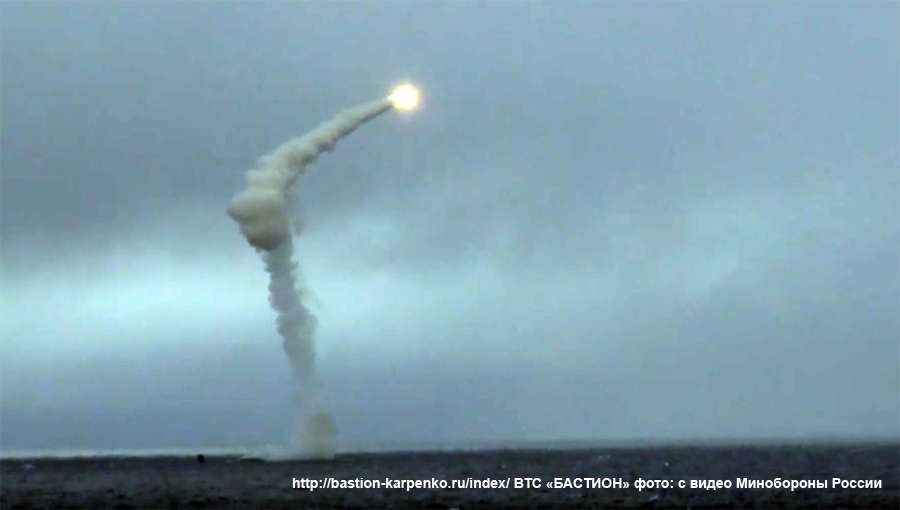 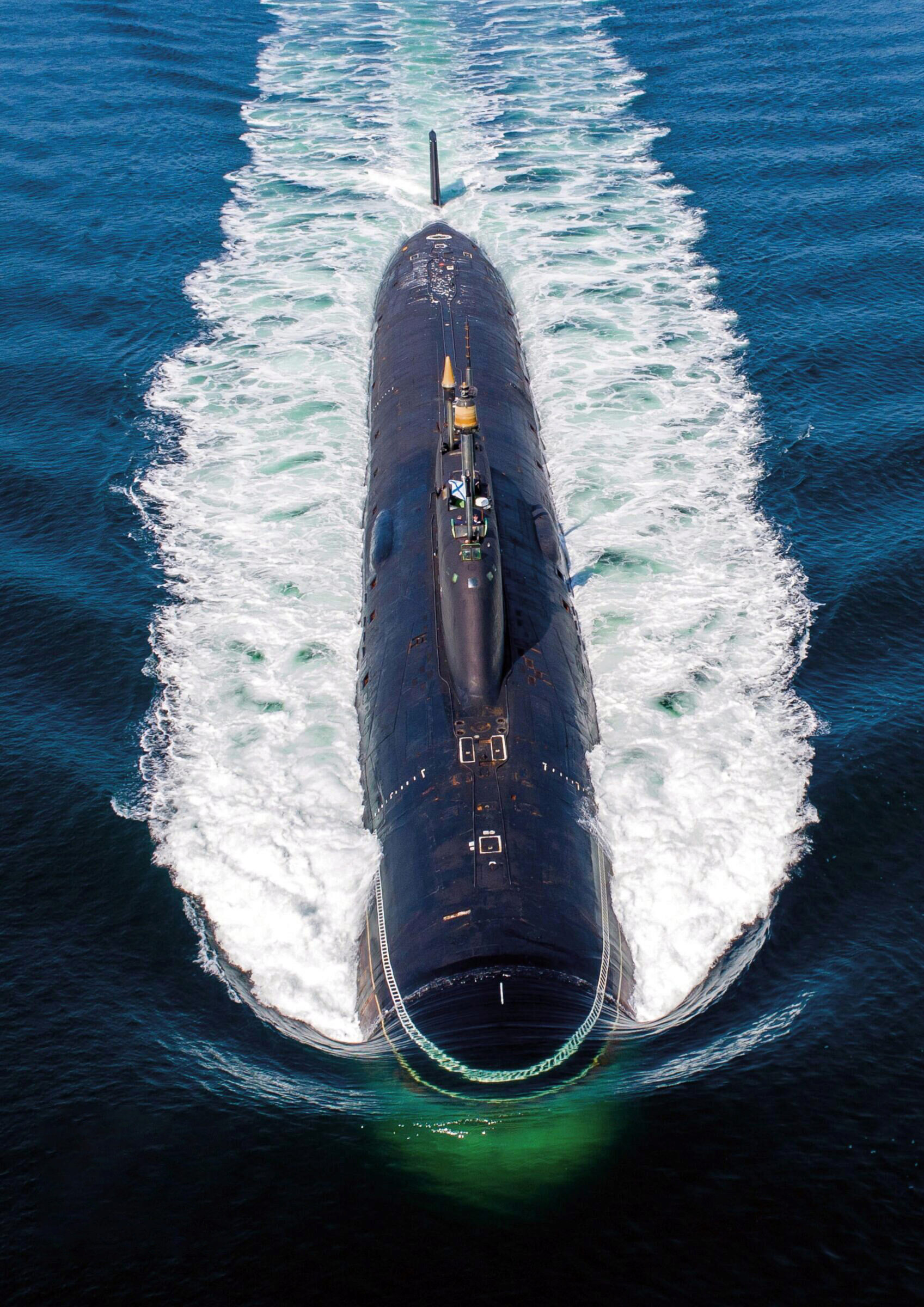 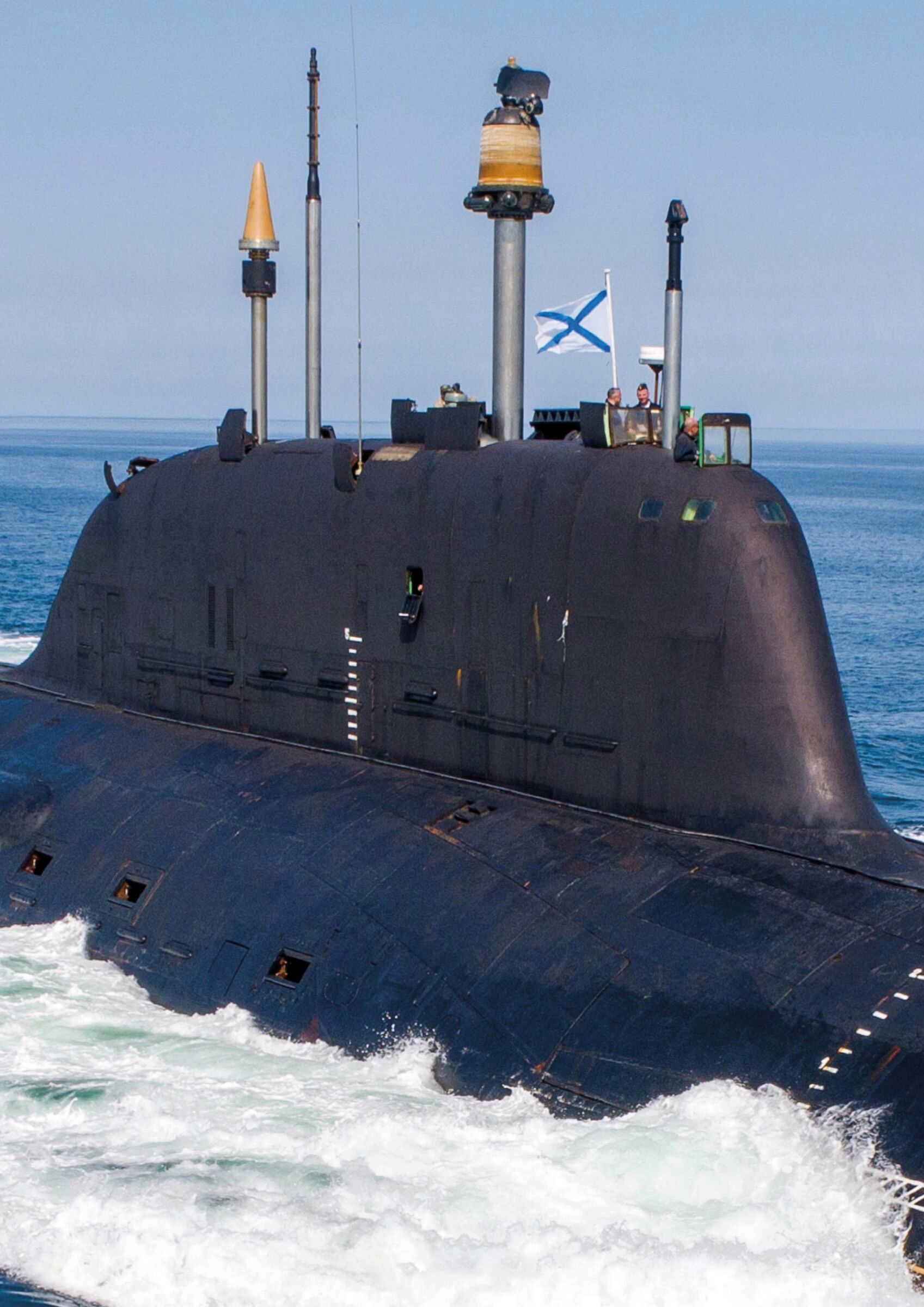 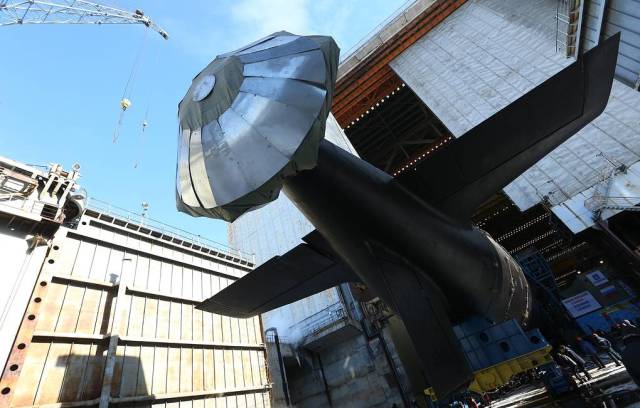 The nuclear submarine of project 885M "Yasen-M" differs from the previous version in greater manufacturability with a smaller number of crew, as well as versatility: it is capable of hitting both underwater, surface and ground targets. Alexey Leonkov, a weapons specialist, military expert, spoke about this in a conversation with Lenta.ru.

The first nuclear submarine of the Project 885M "Yasen-M" series "Novosibirsk" arrived at the place of its permanent deployment in Kamchatka. The Ministry of Defense reports that the submarine has already launched the Onyx anti-ship cruise missile at a sea target.
“The letter "M" in the name of the project means modernization. Its peculiarity lies, first of all, in the fact that the new submarine differs from the lead one in size and has a smaller crew: 90 versus 65. The missing members are replaced by a modern combat information and control system, which takes on many functions and facilitates combat work, ” Leonkov said.

Also, according to the expert, the launchers can accommodate 40 Kalibr cruise missiles, as well as 36 Onyx and hypersonic Zircon missiles. Plus ten torpedo tubes.


“The torpedo attack is also not cancelled. For a long time, it will remain an effective weapon that allows you to hit enemy ships, the specialist emphasized. - A total of eight submarines are planned to be produced in the series, which will be released in accordance with the schedule. Modernization made it possible to make them more compact and slow-moving, while increasing firepower and making them universal.”
Leonkov concluded that the new submarine can hit both underwater and surface and ground targets. It has become more versatile and modern.
Earlier it became known that the US leadership is negotiating to accelerate the supply of nuclear submarines to the Australian Navy in response to the growing military power of China.

My opinion is therefore not authoritative and is not part of the text;
The text is sparse, amateurish, but the text openly mentions 40 Kalibr missiles. We all know that these submarines have 8 silos, but there was constant speculation as to whether one silo could hold 4 or 5 Kalibr missiles or 3 to 4 Onyx or Zircon missiles. This part with "36" Onyx or Zircon projectiles is not clear to me, so I would rather go with that variant if it were 32 projectiles, that is 8 X 4.

Sevmash reported on tests of the Krasnoyarsk multi-purpose nuclear submarine 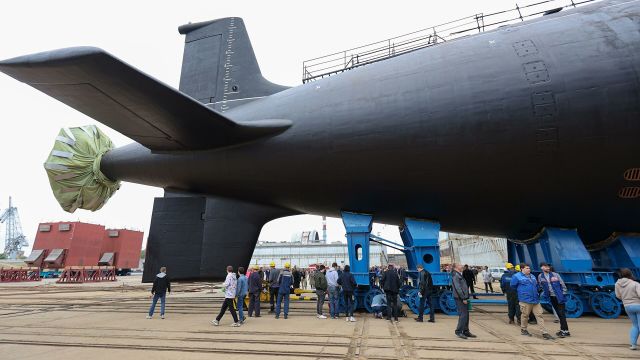 Also, the general director of the enterprise, Mikhail Budnichenko, spoke about the completion in 2022 of testing the nuclear submarine of project 09852 "Belgorod"

On June 27, a TASS source reported that the Krasnoyarsk nuclear submarine entered factory sea trials in the White Sea for the first time.

"Krasnoyarsk" - the second serial submarine, the third ship of project 885M ("Ash-M"). The submarine was laid down in 2014 and launched on July 30, 2021. Project 885M nuclear submarines were developed by the St. Petersburg Marine Engineering Bureau "Malachite". The lead submarine of Project 885M Kazan was handed over to the Russian Navy on May 7, 2021. The main strike weapons of Project 885/885M submarines are Kalibr-PL and Oniks cruise missiles.

On October 28, the Board of Directors of JSC "PO" Sevmash "at a meeting held in St. Petersburg extended the powers of the General Director of the enterprise Budnichenko for another five years. Chairman of the Board of Directors Vladimir Korolev noted the effective and dynamic development of the enterprise under his leadership. Budnichenko heads the shipyard already 10 years.

The text is sparse, amateurish, but the text openly mentions 40 Kalibr missiles. We all know that these submarines have 8 silos, but there was constant speculation as to whether one silo could hold 4 or 5 Kalibr missiles or 3 to 4 Onyx or Zircon missiles. This part with "36" Onyx or Zircon projectiles is not clear to me, so I would rather go with that variant if it were 32 projectiles, that is 8 X 4.

Well the thing is that Calibres and Onyx and presumably Zircon can all be fired through torpedo tubes so the original quote:


Also, according to the expert, the launchers can accommodate 40 Kalibr cruise missiles, as well as 36 Onyx and hypersonic Zircon missiles. Plus ten torpedo tubes.

So they are saying there are 10 torpedo tubes but that it can carry 40 cruise missiles and 36 anti ship missiles, which means a total of 76 weapons.

It is generally understood that the Yasen have four UKSK launchers with 32 tubes, which suggests it might carry a weapon load of 40 land attack cruise missiles and 36 high speed supersonic or hypersonic anti ship missiles and land attack missiles... SSGNs this size previously carried 40 torpedoes in addition to the missiles they carry in missile launchers so having 32 missiles in missile tubes... presumably a mix of Calibres and Onyx and Zircon missiles and the rest of the missiles stored in the torpedo room ready to load and fire 10 at a time from torpedo tubes and 32 ready to launch from vertical tubes... that is good fire power...

So assuming 76 weapons and 32 in the UKSK vertical launch tubes then that means 44 further weapons in the torpedo room which might be calibr or Onyx or Zircon, or standard torpedos or Ovtet or other weapon options.

Source: "Sevmash" will give the Navy two nuclear-powered ships "under the Christmas tree"

The Project 955A (Borey-A) nuclear-powered strategic missile submarine Generalissimus Suvorov and the Project 885M (Yasen-M) multi-purpose nuclear submarine Krasnoyarsk, built at Sevmash, can be handed over to the Russian Navy on New Year's Eve. On Thursday, November 24, TASS was informed by a source close to the military department. 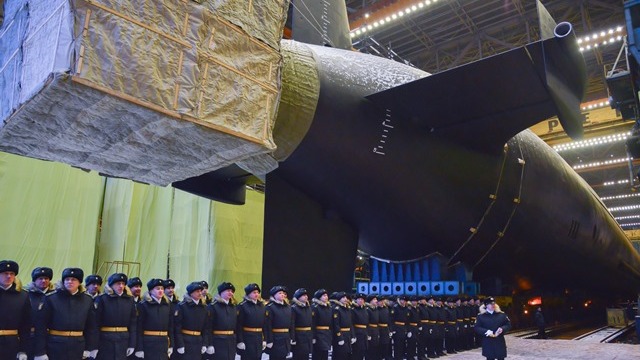 "According to existing plans, traditionally, the transfer of two submarines - Generalissimo Suvorov and Krasnoyarsk - can take place under the Christmas tree, that is, in the third decade of December," he said.

According to the interlocutor of the agency, the transfer of two nuclear submarines to the Pacific Fleet is scheduled for the summer of 2023.

“First, the inter-fleet crossing along the Northern Sea Route will be made by the Generalissimo Suvorov, then the Krasnoyarsk will go. According to existing practice, such transitions are carried out accompanied by groups of ships of the Northern and Pacific Fleets in their areas of responsibility,” he noted.

TASS has no official comments on this matter.

Generalissimo Suvorov is the second serial (third in a row) Project 955A strategic missile submarine. It was laid down at Sevmash in December 2014. The exit ceremony from the boathouse took place at the end of December 2021. In July of this year, it was reported that the submarine for the first time left the territory of Sevmash for factory sea trials in the White Sea.

Currently, the Russian Navy has three submarines of the basic project 955 "Borey" ("Yuri Dolgoruky", "Vladimir Monomakh" and "Alexander Nevsky"), as well as two submarines of the modernized project 955A ("Prince Vladimir" and "Prince Oleg" ). Each Project 955/955A submarine is armed with 16 Bulava solid-propellant intercontinental ballistic missiles. Nuclear-powered ships are also equipped with 533-mm torpedo tubes.

"Krasnoyarsk" is the second serial (third in a row) nuclear submarine of the modernized project 885M (code "Ash-M"). The submarine was laid down in 2014 and launched in July 2021. Five more Project 885M submarines are on the stocks of Sevmash at different stages of construction: Arkhangelsk, Perm, Ulyanovsk, Vladivostok and Voronezh.

Two Yasen-Ms, Kazan and Novosibirsk, have been serving in the Russian Navy since last year.

On Project 885 submarines, for the first time in domestic shipbuilding, torpedo tubes were placed not on the bow, but behind the central post compartment. "Ash" is armed with cruise missiles "Onyx" and "Caliber", homing 533-mm torpedoes. In the future, they will also be able to use Zirkon hypersonic anti-ship missiles.


SO BOTH SUBMARINES WILL BE DELIVERED IN THE THIRD DECADE OF DECEMBER AND WILL SAIL FOR THE PACIFIC OCEAN DURING THE NEXT SUMMER..