This is some bullshit.  Each 885M and even 885 submarines will be adapted to carry 3M22 missiles. Yasen will certainly have mixed weapons.  There are ships at which it is enough to fire a P 800 or Calibr salvo

The modernized Onyx will still be a very dangerous missile.

Mir wrote:Probably a more likely scenario is that the Perm would be the first boat to be fully operational with Tsirkon missiles.

No, it will be the first serial build sub of the type Yasen-M which will be equipped with the missile as it is launched.

The Russian Navy will receive Novosibirsk this month.

Hell to the yeah

Hopefully new ones get ordered soon, both are money well spent

Russian President Vladimir Putin gave the start via a video linkup to the ceremony of raising the naval flags aboard the latest nuclear-powered submarines Knyaz Oleg and Novosibirsk during the Defense Ministry’s enlarged board meeting on Tuesday. 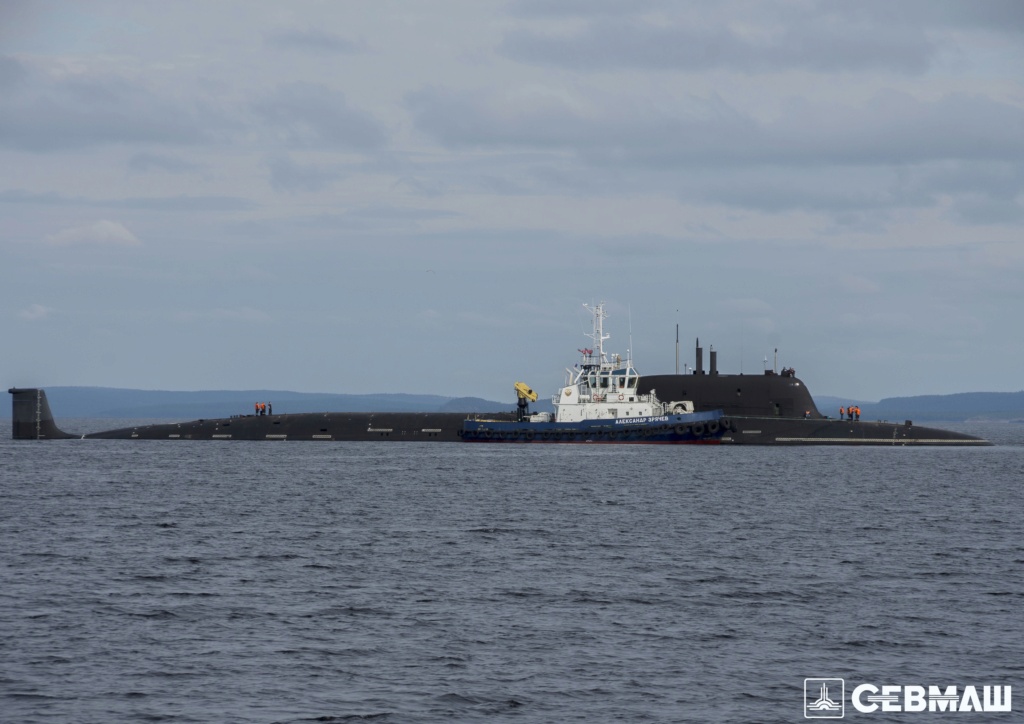 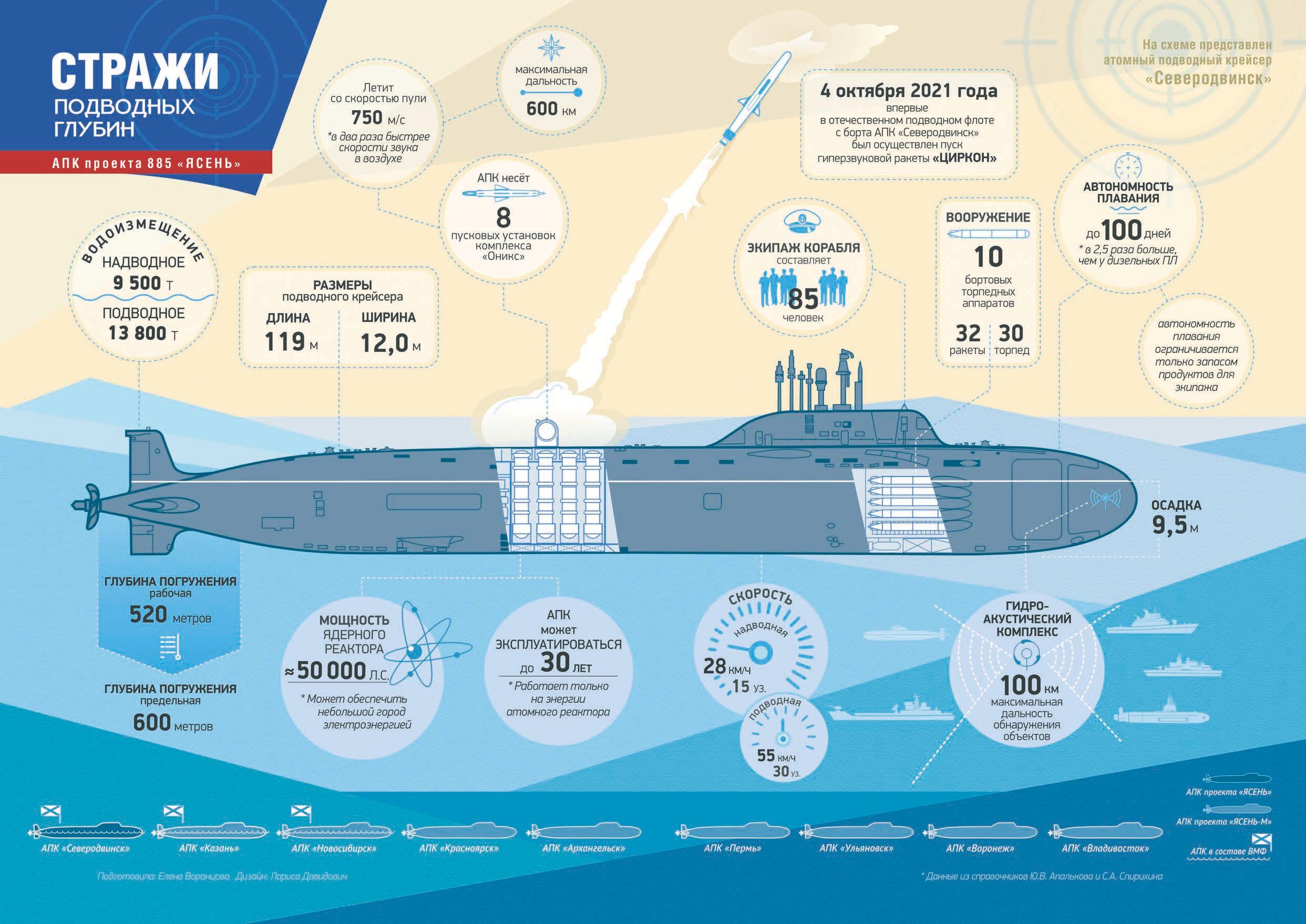 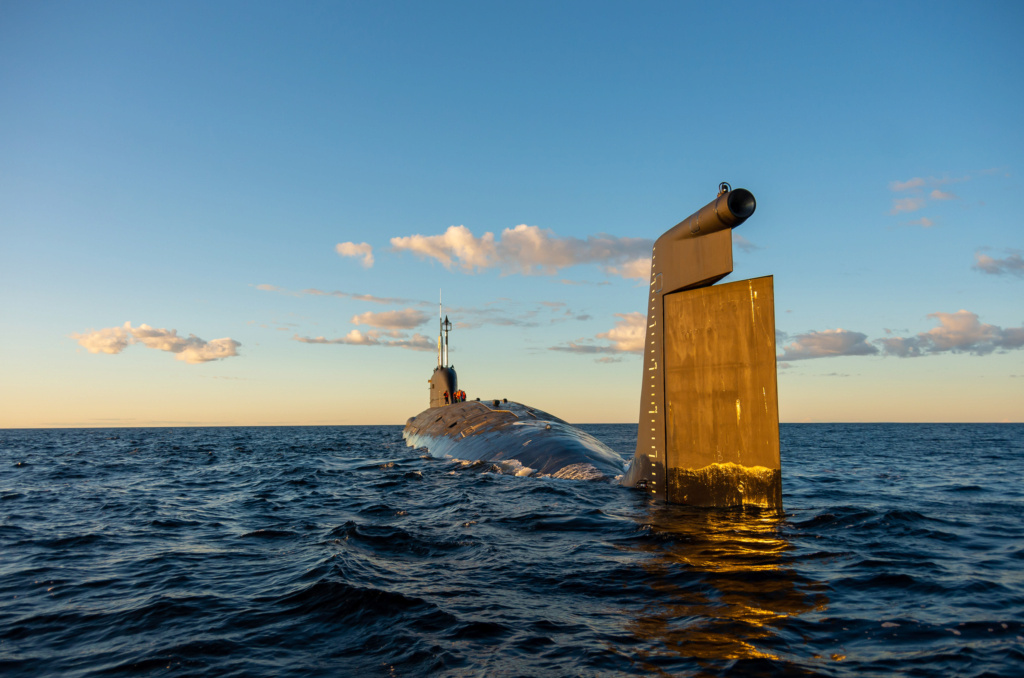 The list states that K-571 Krasnoyarsk will be handed over to the fleet in 2023 (which I believe), while K-564 Arkhangelsk is only scheduled for 2024. My opinion is that both of these submarines will be handed over to the fleet by the end of 2023. I am almost certain that the K-564 Akrhangelsk will be launched in the next two to three months at the latest. 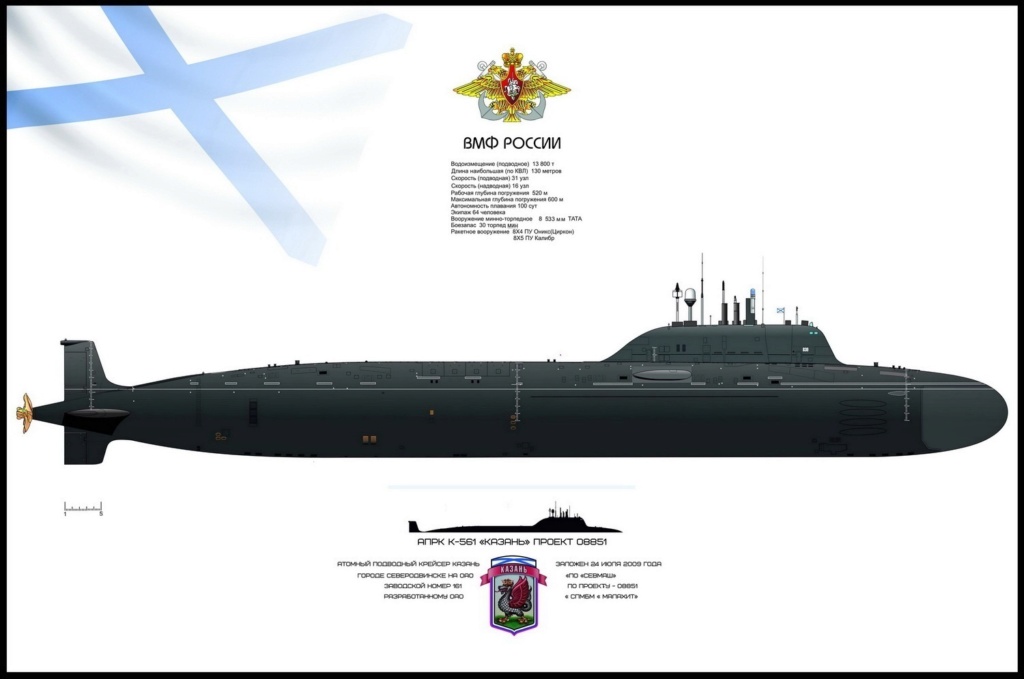 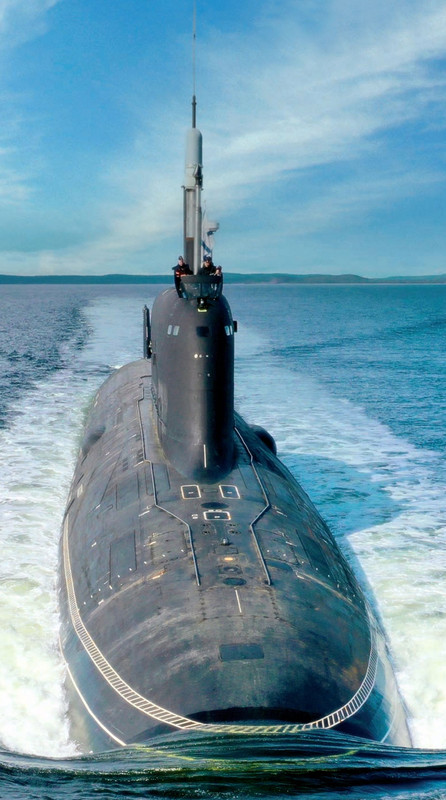 Multi-purpose nuclear submarine of project 885M "Krasnoyarsk" will go on sea trials in the White Sea. This submarine is being built at Sevmash. It is assumed that sea trials will take place in early June this year.

This was reported to TASS by a source in the military-industrial complex. He added that in the White Sea they will check the operation of on-board equipment in field conditions, determine its seaworthiness and operational qualities for compliance with design characteristics.

The submarine is currently being prepared for mooring trials. And after running in the White Sea, state tests will begin with a check of weapons systems.

Serve "Krasnoyarsk" will be in the Pacific Fleet. The submarine is planned to be transferred to its composition at the end of 2022. 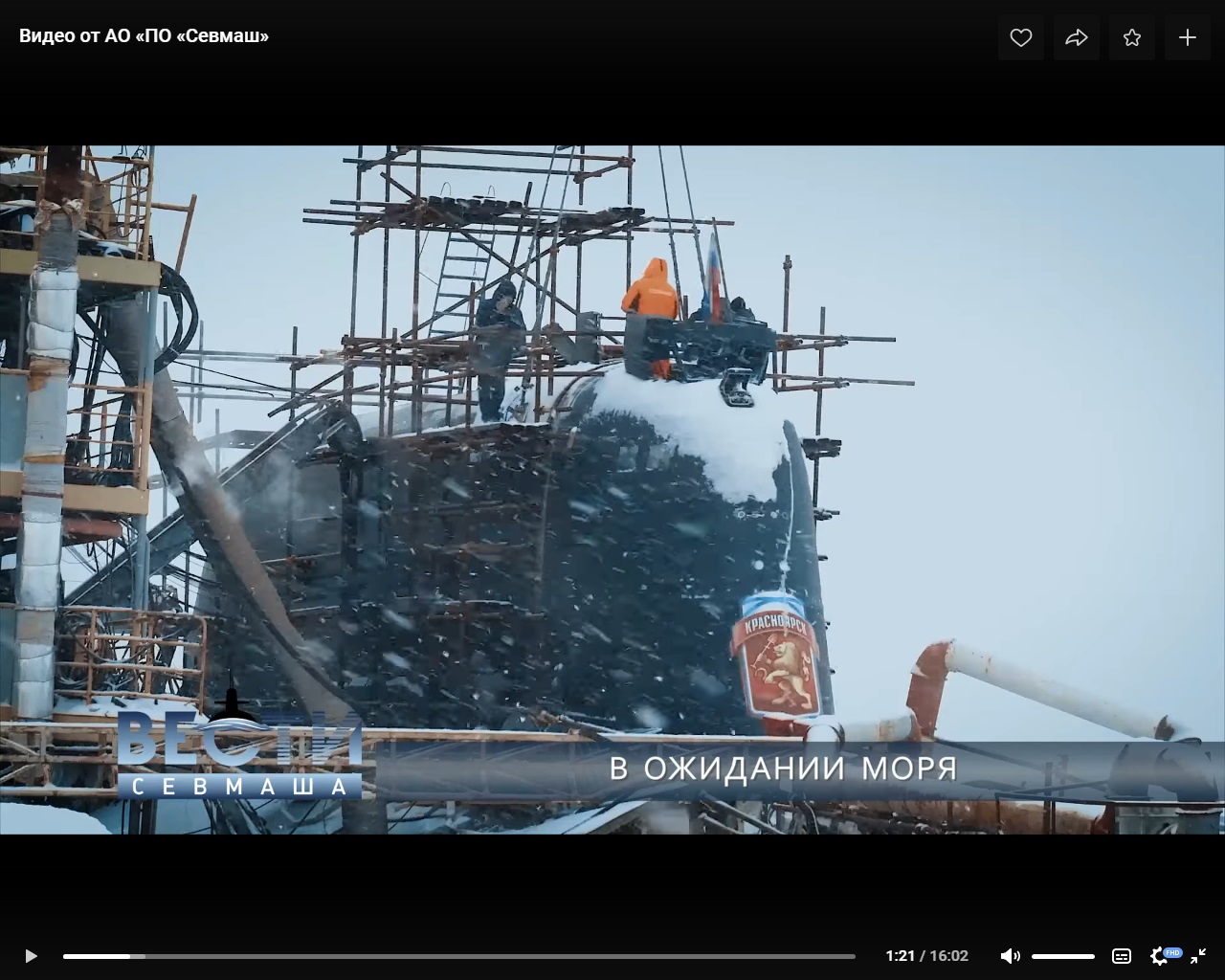 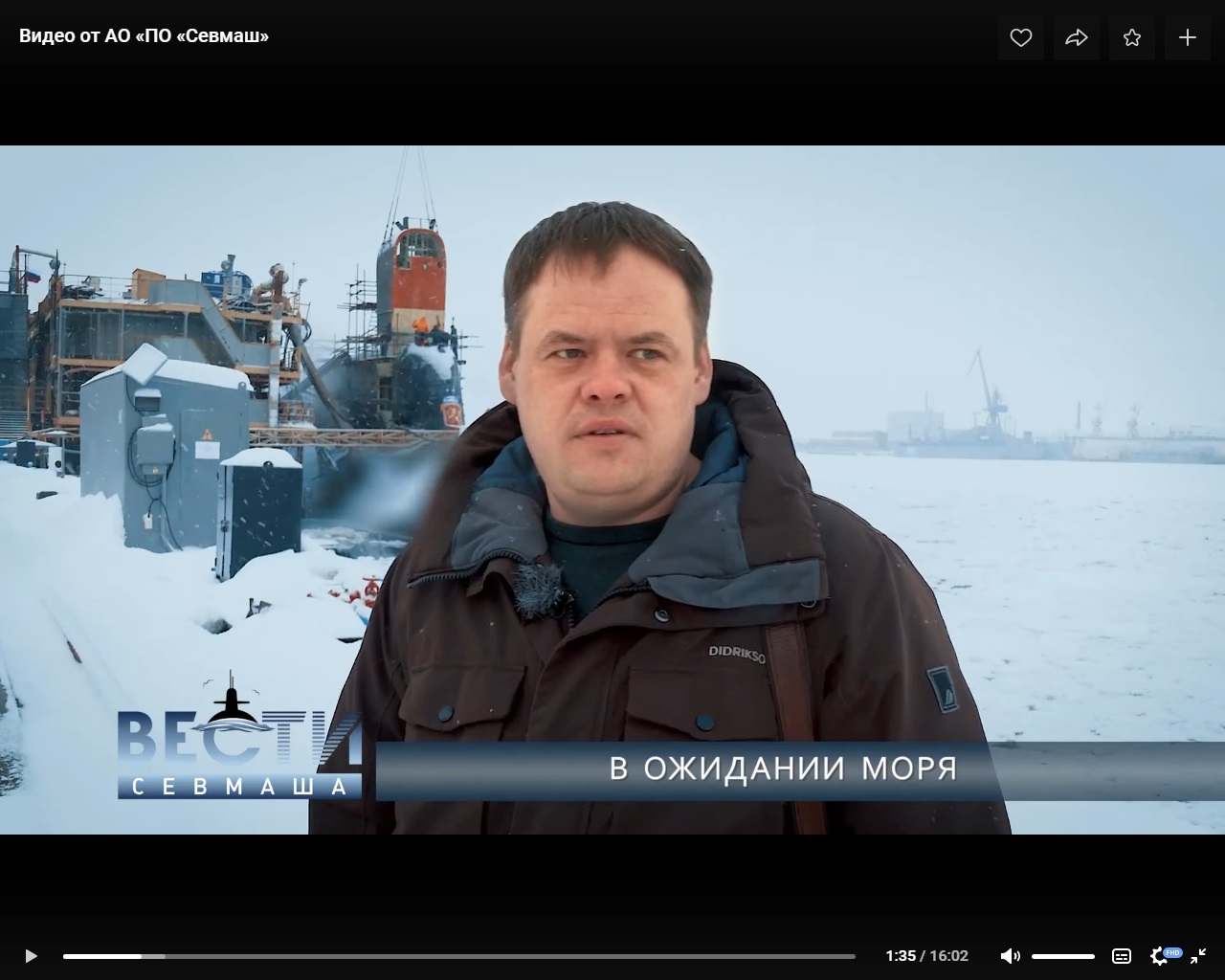 Everything you need to know about the Yasen class: 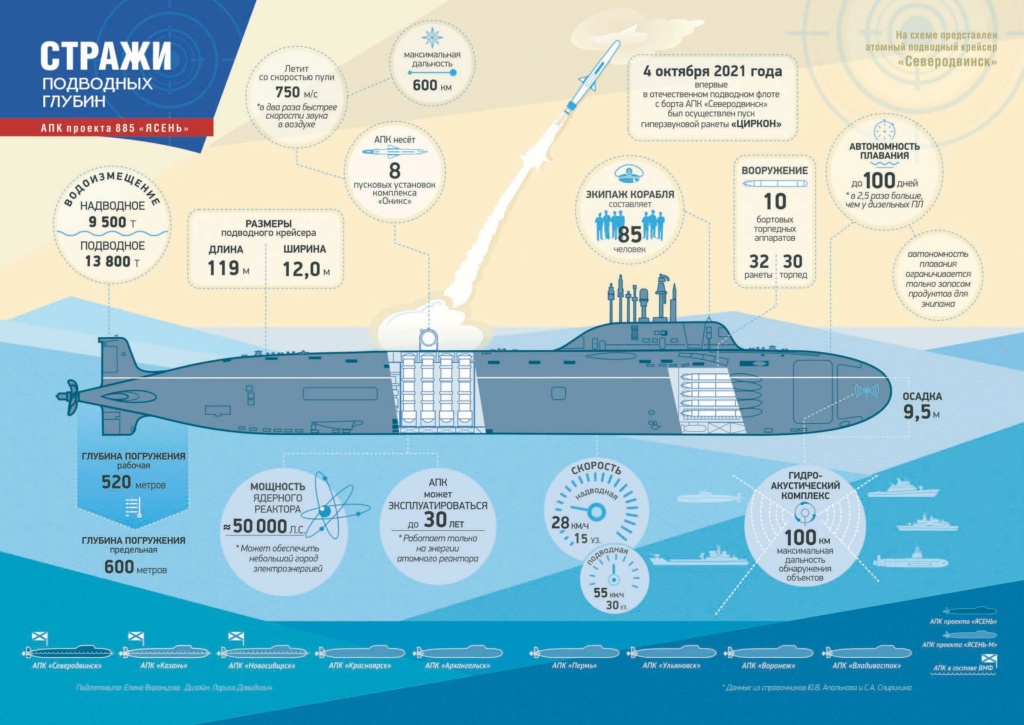 That graphic seems to indicate it only has 8 AShMs rather that 8x VLS silos. I'd suggest the graphic is in error.

Big_Gazza wrote:That graphic seems to indicate it only has 8 AShMs rather that 8x VLS silos.  I'd suggest the graphic is in error.

Each has 4 missiles.
lyle6

8 launchers with 4 tubes a launcher. 32 presents in total.

I wonder if there is potential for those big tubes to be used for something else, like an IRBM or IRCM, or even an SLBM or SLCM... it would only be two per UKSK launcher, but they could be much bigger and longer ranged than existing missile types.

You could end up with SSBNs that can either carry 10 UKSK launchers with 20 IRBMs or IRCMs, or 80 of the current missile types carried by the UKSK system... or combinations of the two.

One of the missiles the UKSK can carry is Otvet, or Answer, which is a ballistic rocket that delivers a torpedo rapidly to the site of an enemy submarine... it is launched vertically and can fly in any direction after launch and reach locations 50km away in a few minutes at mach 2+, so for self defence it would be an excellent system for an SSBN.

Because of SLBM limits the sub might only carry 12 or 16 SLBMs, which would leave 2 to 4 UKSK launchers free with 16 to 32 missiles for defence or other purposes.

Having more SSBNs makes it harder for the enemy to track and deal with them so using the UKSK launcher for SLBMs but only having 2 or four SLBMs on each boat means the rest of the tubes can make the sub an SSGN/SSBN/SSN combination vessel.

They think they can arm nazis in Ukraine with no consequences... Russia isn't a little country like Iraq or Iran...

The maximum depth for the boat is 600 m

MOSCOW, May 19. /TASS/. Multi-purpose nuclear submarine with cruise missiles project 885M "Yasen-M" "Kazan" worked out in the Barents Sea diving to the maximum depth. This was reported to journalists on Thursday in the press service of the Northern Fleet.

According to the established tactical and technical characteristics of the ship, the maximum depth for it is 600 m.

"The crew of the submarine successfully completed the assigned tasks. All systems and mechanisms of the ship worked normally. The submarine confirmed its technical capabilities. The dive was carried out in the deep waters of the Barents Sea on the border with the Norwegian Sea," the press service said.

It is noted that for the comprehensive support of the event, a detachment was formed from surface ships and rescue vessels, led by the large anti-submarine ship Severomorsk, which worked out the assigned tasks in the area of ​​deep-sea diving of the submarine.