HM1199 wrote:can someone tell me , at what range a NEBO M complex can detect an f22 or an f35? or at least if it can detect it from a reasonable distance?
also , can someone explain how does that ''multispectral queing" thing works ?
thank you

Here you have decent article on radars in general, both "meter" and "decimeter" wavelenght ones: http://www.radioamatore.info/attachments/article/1773/NNIIRT-55Zh6M-Nebo-M-VHF-Radar-1S.pdf

F-22 and F-35 are optimised to evade the signals from X band radars because that was the most common tracking radar frequency and still is.

the problem for the stealth aircraft of today and near future is that NEBO uses three different frequency ranges that are each rather different.

NEBO is very big and rather powerful compared with the seeker in a missiles nose or an aircraft nose so even the X band component of the system will offer better detection performance against stealth aircraft.

Most small RCS items and even large RCS items can be stealthy if mistaken for clutter... an An-2 flying at low level at near its stall speed of 75km/h was feared to be the first effective stealth aircraft in that look down radars that could detect it could also detect cars on a motorway doing 100km/h so to remove the cars and other ground based fast moving objects the An-2s flying in that airspace would also be removed from the display as noise.

For the same reason a low flying F-35 might be removed to prevent golf balls and birds appearing on the radar screen except the flight speed of the F-35 (at more than 150km/h) would mean it would clearly not be a golf ball or bird so even look down radars would display it if enough of a return signal could be detected.

Long wave radar signals are not effected by the shaping of the aircraft so stealth shapes wont effect the detection range of metric wave radar and coatings are not thick enough to have much effect either.

You need a much bigger aircraft (closer in size to the radar wave length) to effect longer wave radar signals... like the B-2.

From million miles. It actually can detect aircraft flying in Mars orbit.

The Russian radars are not capable to do that, but of course the US military doesn't know the meaning of impossible : )

they write about the capability of Hawakeye :
“It is the physics of longer wavelength and resonance that enables VHF and UHF radar to detect stealth aircraft,” Westra wrote in his article, titled “Radar vs. Stealth.”

UHF-band radars operate at frequencies between 300 MHz and one GHz, which results in wavelengths that are between 10 centimeters and one meter long. Typically, due to the physical characteristics of fighter-sized stealth aircraft, they must be optimized to defeat higher frequencies in the Ka, Ku, X, C and parts of the S-bands.

The Nebo 70 times bigger than the hawkeye radar.


so either the US military lie , or the NEBO-M can detect the f-22/35 from extreme distances : )
Pick your choice.

You can trash now the US military, and bragging about the incapability of them : ) and how rubbish the US navy and the hawkeye.


But the principle of operation to detect stealth is simple, and using the same principle like this antenna:

thanks for the replies guys , so from all that we can deduce the s400 using nebo m or gamma DE can actually be a potent stealth hunter ?
GarryB

Incoming ballistic missile warheads have a small RCS too and need to be tracked and engaged...
medo

Nebo-M AESA complex consist from 3 radars, 1 VHF working in metric diapazone, 1 working in dm diapazone and 1 working in cm diapazone. Max range is 600 km. VHF radar see stealth planes without problem and having more Nebo-M complexes in different locations mean, that they could triangulate stealth planes very precisely for the use of air defense and fighter jets.

Older Nebo-SVU VHF radar, which was the first AESA VHF radar, have enough small cell for target location, that S-300 complex could launch missile on it without using of tracing radar. It was used only to guide missile to the cell of Nebo-SVU radar and there missile itself will find and attack the target. No need for tracking radar to actually see the target.

Modwern AESA VHF radars are precise enough for air defense use, specially when there is more of them in different locations and they triangulate targets. In that case stealth doesn't mean any advantage. SHORADs and medium range SAMs will use optical channels against stealth planes, so for them VHF radar is enough. Don't forget that Russian IADS also have a lot of different passive ELINT complexes, which could detect any emmiting from planes and stealth F-22 and F-35 also use radars, data links, TACAN, communications, IFF, etc, so they will be precisely tracked from long distances for the use of air defense.
Stealthflanker

HM1199 wrote:can someone tell me , at what range a NEBO M complex can detect an f22 or an f35? or at least if it can detect it from a reasonable distance?

this actually difficult to said.

However the VHF band will roughly give 7 times the detection range of X-band assuming same power and antenna gain. Thus low 0.0001 sqm target that detectable in X-band will roughly be detected in 210 Km by VHF band.

So basically yeah..it should be detected at reasonable distance. The only limit would be Horizon.
HM1199

hmm i see thanks for the information guys , yes so if the radar detects the airdraft (RCS 0.1 m2) from 240 km in the decimeter band then in the xband range will be higher .
However about the Nebo M , i hear all around that the "range is 600 km " , but against what ? and in which band ? because its multispectral so i dont know . Does someone know anything about that?
Singular_Transform

HM1199 wrote:hmm i see thanks for the information guys , yes so if the radar detects the airdraft (RCS 0.1 m2) from 240 km in the decimeter band then in the xband range will be higher .
However about the Nebo M , i hear all around that the "range is 600 km " , but against what ? and in which band ? because its multispectral so i dont know . Does someone know anything about that?

hmm i see thanks for the information guys , yes so if the radar detects the airdraft (RCS 0.1 m2) from 240 km in the decimeter band then in the xband range will be higher .

The range a radar detects a target is determined by several factors... the size of the antenna gives accuracy, the power of the signal allows range... the shape of the target can reduce the amount of radar signal that returns to the radar but is not a factor in longer wave radars as the shape of the aircraft is rather less important.

A decimetre radar is less effected by target shape so can detect a shaped stealthy aircraft at longer ranges. It does not give as accurate a position of the target however as it is less precise. The breakthrough with the longer wave NEBO radars is that their modern digital design and AESA antenna arrangement improves performance to the point where they are accurate enough when used with other sensor and radars to track stealth objects.
franco

Another 11 Nebo-UM radar stations ordered for delivery through the end of 2019.

The Russian Navy currently operates three radar stations on the coasts of the Caspian Sea, the Sea of Japan and the Sea of Okhotsk

ST. PETERSBURG, June 30. /TASS/. The upgraded over-the-horizon coastal radar Podsolnukh (Sunflower) has been adapted for its operation in the Arctic, Chief Designer of the Research Institute of Long-Distance Radio Communication Sergei Saprykin told TASS on Friday.

The Podsolnukh has been modernized for its operation in extreme polar conditions for its installation on the Arctic coast," he said at the International Maritime Defense Show in St. Petersburg.

Institute CEO Alexander Miloslavsky earlier told TASS that the upgraded radar prototype would undergo factory trials before the end of this year.

The Podsolnukh over-the-horizon surface wave coastal radar is designed for detecting sea and air targets at a distance of no less than 400 km. In its automated mode, the radar station can detect and track no less than 300 sea and 100 aerial targets.

The Russian Navy currently operates three Podsolnukh radar stations on the coasts of the Caspian Sea, the Sea of Japan and the Sea of Okhotsk. 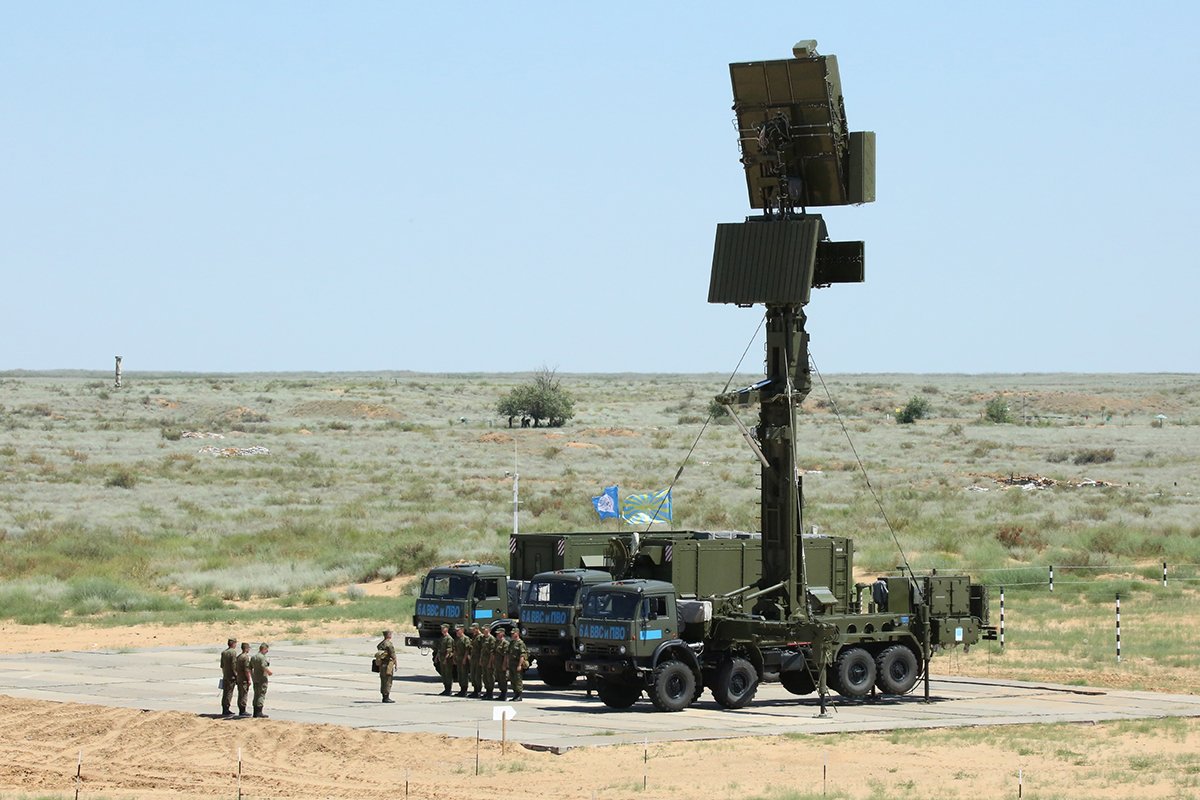 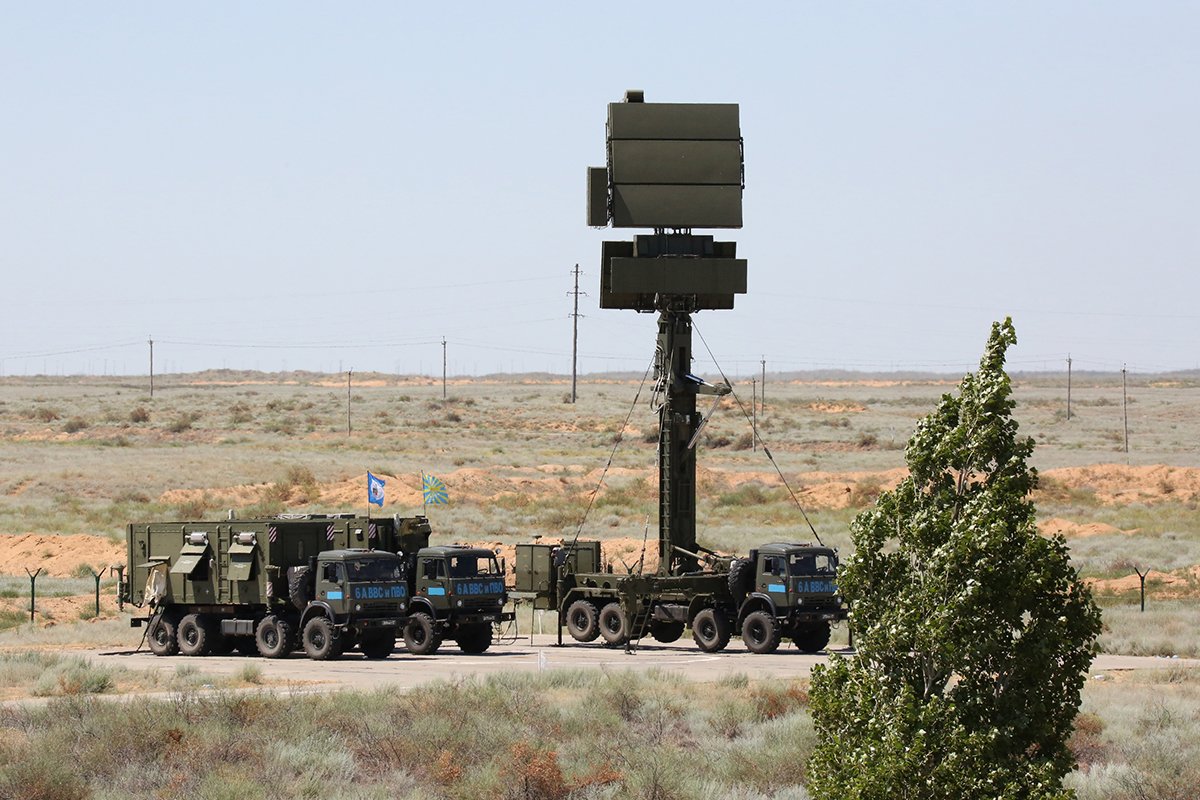 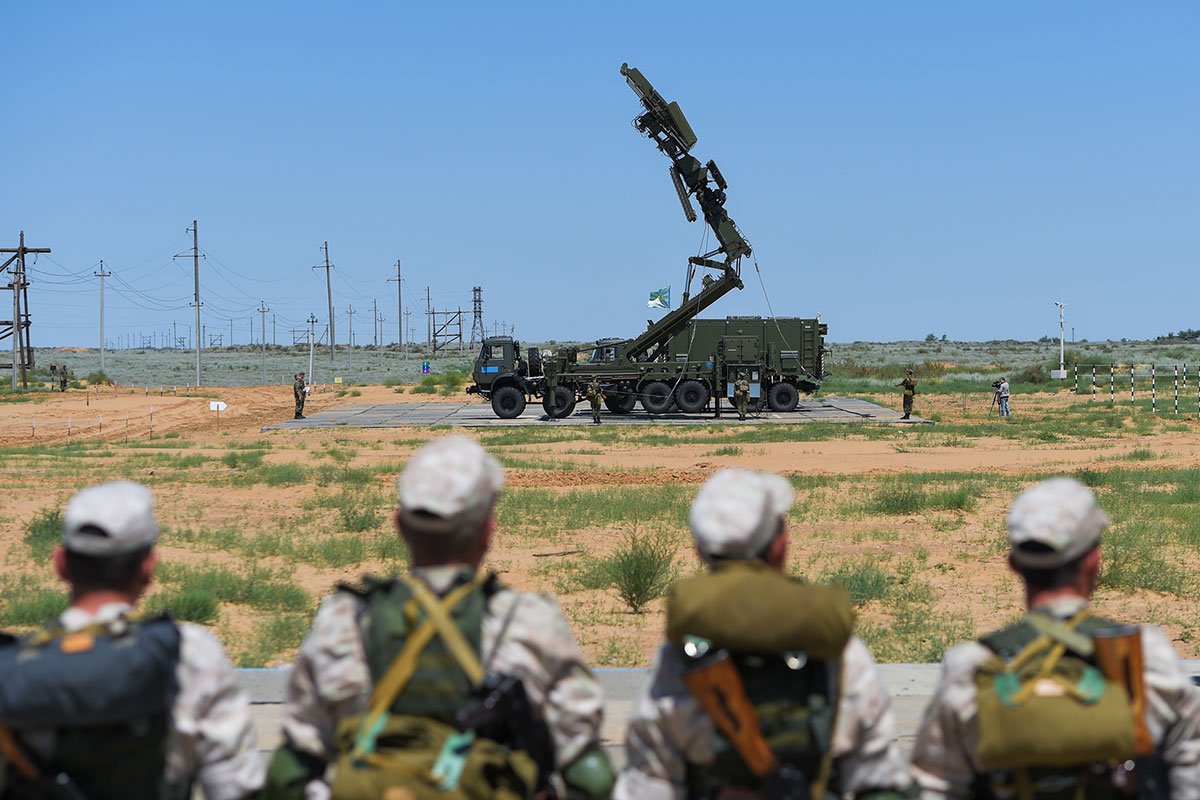 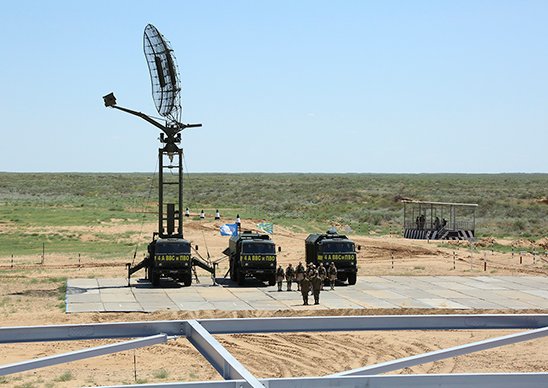 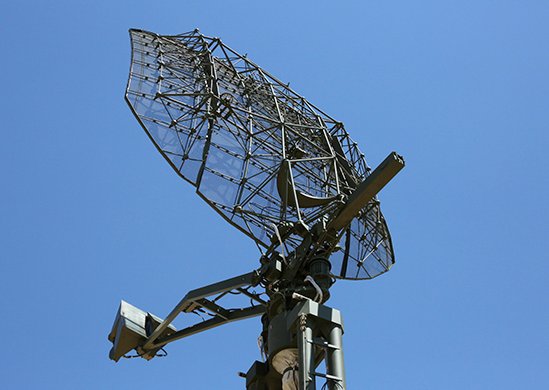 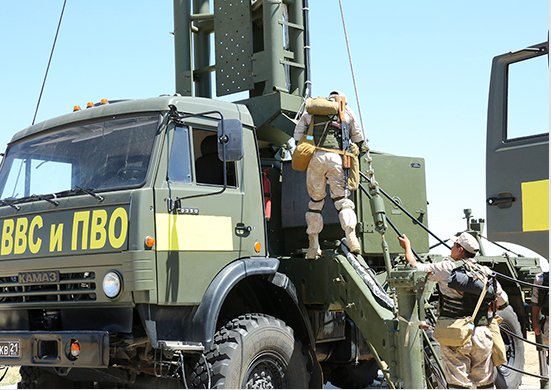 what does UHF band covers L band or S band or something else for Russian Band Specification ?

Also what band Podlet-K1 operates I see many antenna for Podlet-K1 any specification for it ?

They are predominantly for anti-artillery if I am correct. They are low altitude radars.
Austin

OEM Specs and more pictures there , You are right its S band also described as Centimeter Band 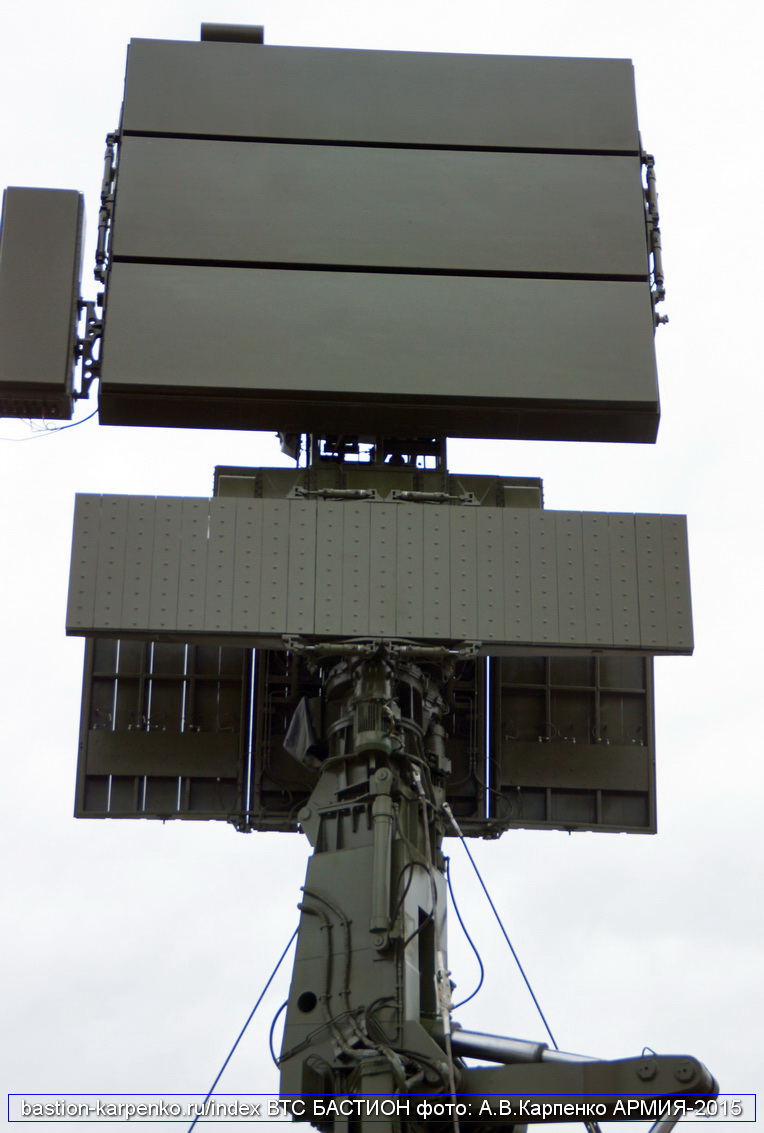 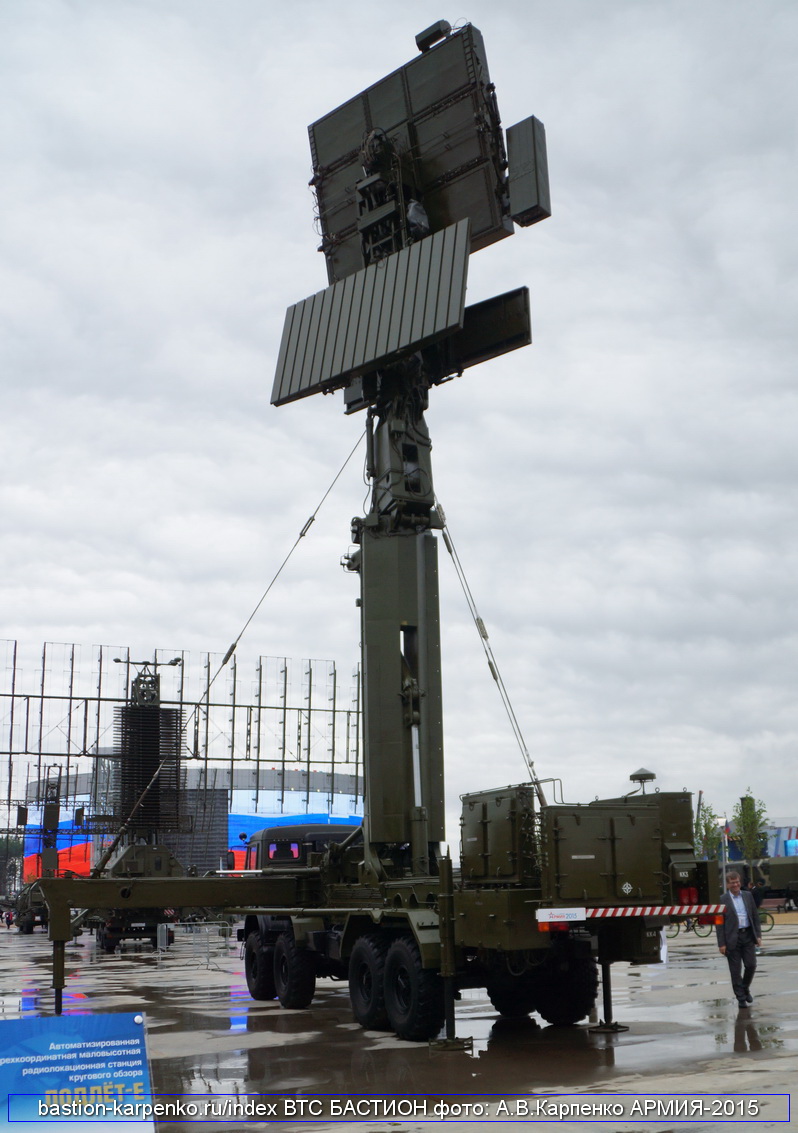 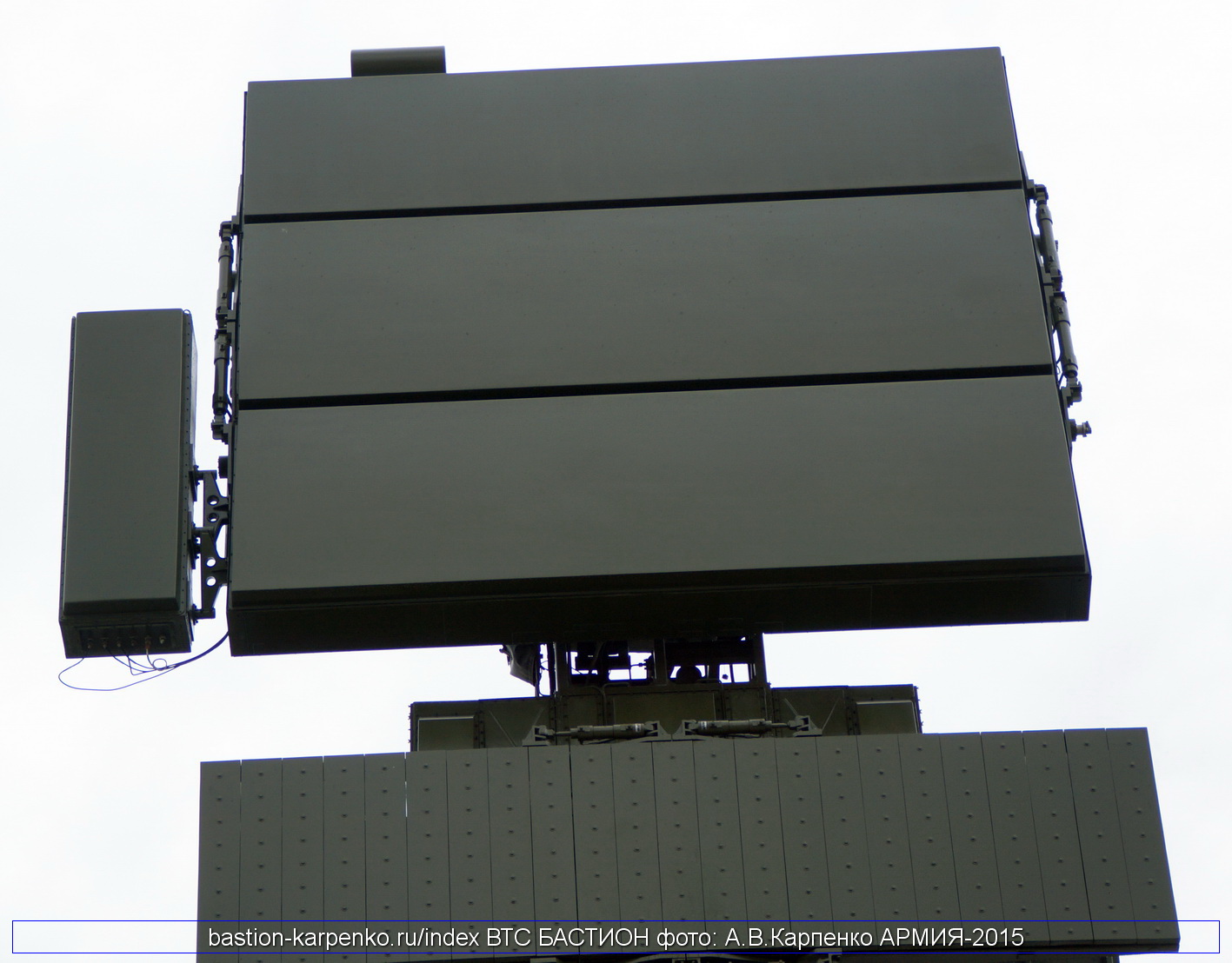 So the Kasata-2E2 is a Decimeter band radar which in Russian Lingo would mean L band and Podlet-K1 is centimeter band which the specs I found is S Band.

its gamma-de on steroids. probably 2 faced radar too. back seems to be simmilar to protivnik albeit smaller. its serious stuff 3 trucks serving that thing, 1 for transport 1 for power supply and 3rd for command staff.
probably comparing performance of kasta radar and this new thing.
http://www.almaz-antey.ru/en/catalogue/millitary_catalogue/1219/1241/1341
Austin

Check out this radar. Contrary to the article it was not developed for the North but as a stationary Airport based radar. It will be installed also on the new Arctic airfields being created or upgraded. The radar is being installed both at military and civilian airports (data linked to military air defense). Started service in 2014 with around 50 ordered (~60% military), believe ~200 planned with about half at military airfields. Utilizes 3 different systems on one platform.

The vast majority of terminal guidance and terminal homing systems use X band and Ku Band radar frequencies... the high frequncies means the antenna of the system can be rather small but still able to accurately track the target.

Most aircraft stealth is optimised against these frequencies.
Austin

L band clearly for LO targets. In a lot of cases, US relied on operating in Low Altitude to bypass radars in their previous invasions - Iraq as example. A lot of helicopters were used in initial invasion to be able to fly in and bypass a lot of radar as most are higher altitude.

This is what I got on quote for S band use:

The designator S-Band (contrary to L-Band) is good as mnemonic rhyme as smaller antenna or shorter range.