Participants: all the globalist organisation + the Russian government.

Would like to hear some takes. I am getting a weird taste in my mouth though
elconquistador

The prime contender for the UK V- passport has laid out its product. The horror would make even an Orwell gasp.

This leering technoloon is already in talks to help realise the #BillGates/#Rockefeller/#KlausSchwab dream of the whole global population being tagged; their faces, interactions, possessions, finances, movements intrusively monitored. #SkyNet, indeed.

And don't think it ends with the Trojan Horse of #coronavirus. As Mad #Hancock said, the ambition is to keep this permanently in place for ALL diseases (soon, no doubt, for compliance with any other behaviour They wish either to restrict or promote). Meanwhile look fwd to this:-

It will be linked to payments systems (as we have long warned would be the case) and will allow manufacturers/retailers to check who is using their product and where AFTER selling it, even to the point of contacting/reporting them for any infringements.


It gets worse. It boasts that it can scan invisible markers at high angles of incidence, on the move, and at distance:-

"You will own nothing"

With these lines it is obvious the passport was never meant to be just a vaccine passport, but a gateway for their global citizen climate saving passport of serfdom and social credit, i.e Agenda 2030. 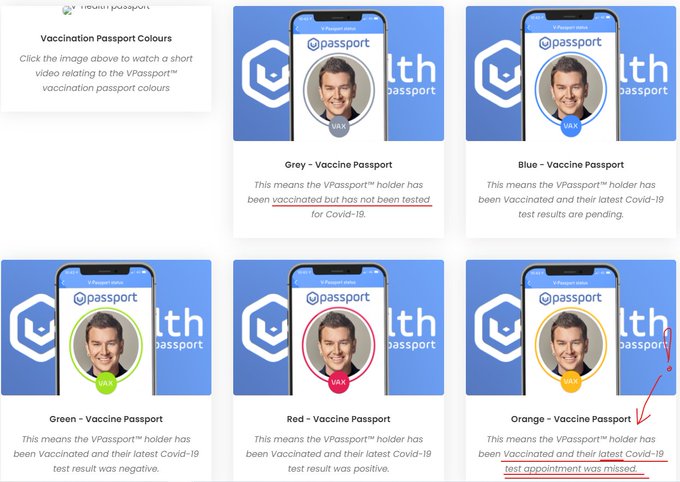 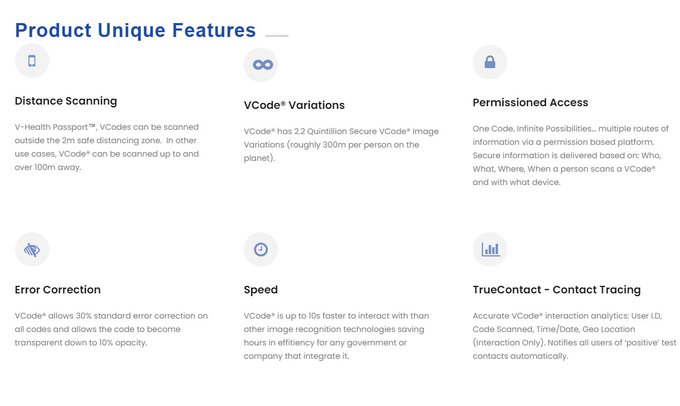 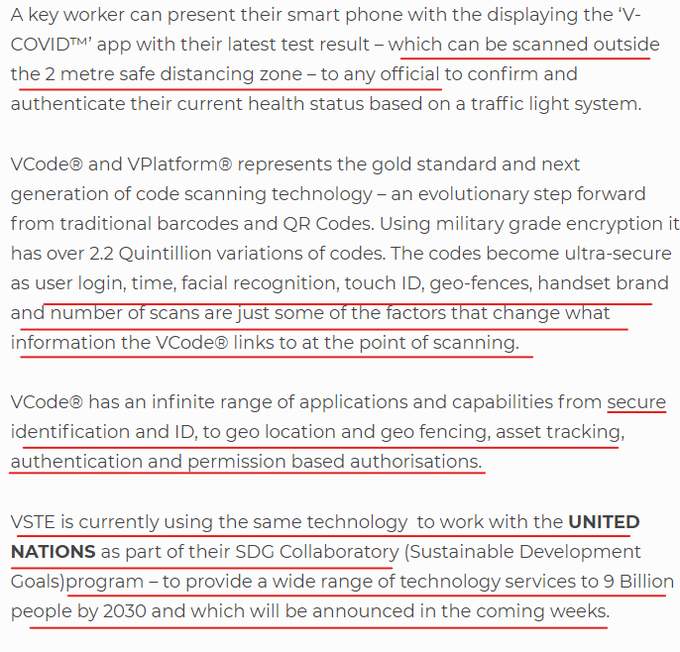 It is clear that Covid-19 is being used as a pretext to have other agendas carried out. Anyone who does not see this is either an
idiot or not paying any attention (basically the same as being a willful idiot).

Last year there was some excuse that mortality was high and hospitals supposedly could not handle the overload of critical cases.
Now there is no longer such an excuse and we are actually transitioning into a flu-like profile for deaths and cases. In some parts
pf the world the disease is still in the second wave regime so their relative mortality is higher. But there is no evidence of any need
for perpetual quarantine.


China may be a closed, authoritarian, militant, "reverse-engineering" society. But even more importantly, China has the world's largest consumer army, and that - more than anything else - is why China is feared by countless corporations around the globe, all of whom desperately seek access to this army of rabid buyers.

As discussed in this thread and others, the globalist program over the last 40 years has been to throw western consumers under the
bus in exchange for new consumers in the developing world.   China by itself is big enough to replace US consumers several times
over when it develops to a critical level, which is not all that far away.   The same for India.   But even before this level, the size
of China and India mean that a small middle class in those countries constitutes enough consumers to double the global market.

Say 10% of China and India are middle class.  That is 280 million people.   At the same time the throwing under the bus of western
consumers is not instantaneous.    So we have a large increase in market size.   Over time the percentage of middle class consumers
around the world will grow even if there is decline in the standard of living in the developed world.

The reason that western corporations are in bed with China is not because they love China.

The anglozionist west , simply moved their corporations to china not for foolish reasons , as many in the forum believe. but a very calculated policy.  the anglo west moved thousands of their tops business to china ,because.

1) the low cost of human labor and their profits will be higher manufacturing in china. this was very attractive for americans big corporations.
2) the big big potential market of china , to capture it ,before europe or russia or japan ,capture it.
3) here is the most important reason. they wanted to lure china away from russia with business
and they used all this business manufacturing and jobs , as a carrot , to convince china to cut relations with russia.. and perhaps join nato.  so to turn china against russia , in the same way they
did it with ukraine ,will have been , like winning the lottery , to provoke china into a war with russia  as they did it in the past ,was the west wet dream,and this is why the democrats with support of republicans accepted this..  for the american elite ,, building a global empire is far more important ,than improving the quality of lives of americans.

So from the point of view of building a global empire ,this wasn't a crazy idea , but a one that could
have worked , had the chinese did not knew what was their real goals , to use them like a condom ,
to rape russia ,and when no longer china need ,drop it , to the garbage can..
the improvement


All things said.. the anglowest policies are 100% focused in building a global empire ,  what they call a one world government , and russia and china are the only stones in the road ,that could block that.
every other opposition is either too small to fight back (like iran ,cuba ,venezuela) or nations that neither join their system but neither interfere , as is the case of India , that is extremely passive state and don't take sides . this is a huge mistake of india ,and prefer a comfort zone of others to deal with the anglo west problem.  but india don't see ,that if the west destroy russia and china , disband their nations ,that india will be next.

this is why india dreams to replace china are silly ,it will never happen. because one of the most important goals of this honeymoon with china from the west , was precisely that china shares a border with russia and they wanted to turn china against russia . this is a continuation of their iron fence around russia.. how nato plan to do that ? by turning every neighbor of russia into their enemies. and they are doing a really dam good job with this..  ukraine ,georgia have been westernizated.. turkey too , belarus half of the country it is already westernizated, if belarus president is removed is game over for russia.. will have another ukraine there.. and the jackpot will be kazakistan..  all this things are possible becasue of the abysmal idiotic passive policies of putin ,of allowing the anglo west to dominate the world ,to lead the world with their highly influential modern business and modern culture.. instead of showing competition , putin prefer to do the most lazy thing , a gas station focused economy . because of of russian money goes to build pipelines and to create a monopoly in oil and gas.. this is the most retarded thing anyone can do , allow your enemies to win the hearts of the world with their leadership in future looking business , as it is their semiconductor ,smartphones ,electronics ,space and huge entertainment industry.  putin have totally wasted 20 years of his life , developing russia in the wrong way .. and his incompetence ,the lack of real economy development , lack of any modernization of their economy ,is what gives the power the west to sanction nations and to isolate countries from the world . is a leadership problem , the total ignoring of the west domination in leading the world into the future .  had putin promoted a totally different economy ,one that directly challenge americans most popular and most loved business , the world will be a different today and there will be actually peace, because leadership , creates followers and the west , europe will not be following america if they saw a superior business power in russia.

-The west works very hard to create a world empire .. the only leader of the world ,this is 100% their policies.
-Putin is 100% focused in building an energy monopoly with "stability and security ". This is extremely lazy ,and lame , because he totally ignores the leadership part and allows americans
to lead ,to influence more the world with their high tech and more ambitious space industry.
So putin face today ,the world he helped to create ,consequences of his 20 years of total inaction
allowing the west to dominate totally in the most influential business ,to later complain about how unfair is the west ,that don't respect russia interest in the world..

so don't like the western created system ? why the hell he don't create his own system instead?
he is really bad president for russia and the reason of russia stagnation of their nation development ,that in the only thing they compete with the west is in weapons and a few other things , that the vast majority of world population really don't care.  So by allowing the west to dominate with their
modern and advanced business ,he made it more and more difficult for russia to survive ,because of western sanctions and the western destabilization of russian borders and nations allied to russia.

All problems that russia face can be absolutely solved , the day russia becomes a truly independent nation  and a leader in world development into the future.. building gas stations or giving gas discounts is not how you fight the west.. putin is incredibly stupid and i don't see russia to ever
do well versus NATO , he have zero chance to ever disband it ,with politeness and his gas discounts.

with luck ,the best putin could do is to "survive" with a mediocre economic growth , and with russia dying in a slow way ,with the massive exodus of russians away of the country ,and they always leaving to the west . to europe ,canada or US. this is how bad putin's russia future is. when russia adversaries countries becomes more attractive than their own country.

in ending , because i know that fool , president Putin will never leave power in Russia.
my only hope is that Russian citizens becomes aware how putin is slowly killing their nation with his
retarded direction of the country . so things needs to be very bad ,before putin can be kicked from
power from his own people. so my hopes is that europe not only cancel nord stream 2 , but also manage to solve their energy problems and cancel also nord stream 1 , so that putin for once understand he suck big time and just leave power for being such incompetent president and failure
vision of the country as a energy station of the west.


in more news.. germany parliament now recommending merkel to hold for now nordstream 2 "temporality" for the pressure of US .

Russia losing nordstream 2 ,make no mistake ,will be the most humiliating thing to that imbecile.
hope that idiot is kicked from power , after europe bans russia energy pipelines . he is very bad leader , and his good intentions alone will not save his country. russia needs a leader with a true vision with true development of the economy.