There has been a lot said in the west about laser guided bomb kits where a laser sensor and manouvering portion is attached to a standard old iron bomb and tail fins are attached to make it a guided bomb... the problem is that while it helps use up old bombs it is not actually cheap because the seeker and guidance and manouvering components are expensive... however what they do is change an iron bomb from something that needs to be carried in enormous numbers by large numbers of aircraft per target to be sure of a hit, into a bomb that can be carried by a single aircraft and delivered with a good confidence of a hit on the first try... which actually makes it cheaper than dumb bombs because using dozens of aircraft and hundreds of dumb bombs is actually expensive too.

Being able to use existing dumb bombs of any type accurately enough to actually hit targets is an enormously potent capability... lots of targets in previous HATO conflicts were only damaged or not hit at all because there were not enough guided weapons available for the job... this system means existing old cheap bombs can be used, but it also means brand new cheap simple bombs can also be produced as well.

It has drawbacks... it is little use against moving targets, and in high winds near ground level I would expect precision performance would be negatively effected, but this is a day night all weather capable system... heavy fog... sand storm... monsoon rain... things that effect laser guidance and even GPS guidance wont effect these bombs, though observing the effects and deciding on follow up attacks might be problematic if you have to drop a bridge you can do so without seeing it... a Tu-22M3 with an FAB-5000 or FAB-9000 hitting a bunker complex would be a sight to see indeed...

Such systems applied to a CAS aircraft like an Su-25 would not only improve free flight bombing performance, but also free flight unguided rocket performance too... it was found with the upgraded versions of the Hind that laser range finders and ballistic computers dramatically improved the accuracy and effective range of unguided rockets of all types from the platform and cannon fire was improved in accuracy as well.

Edit: Even when fighting terrorist enemies blatantly being supported by the west...
ahmedfire

MOD has invested heavily in to inertial guidance, and has applied said technology to just about everything. The new GLATGM's being introduced for Russian MBT's will have inertial guidance integration, to allow them to hit targets at much greater ranges than 5km (presumably beyond 10km).

But this is different from inertial guidance , i mean it's a free fall but it's previously calculated , the bomb it self neither navigate nor have any flight correction ways like inertial guidance

The guidance is in the aircraft and is reusable. That's what make it cheap solution.

But the drawback is that it is pretty useless against moving targets like tanks. They will use it against only static targets. That's why they are developing many guided bombs/missiles like the newest kab-250 which is laser guided but also smaller than kab-500 reducing the price. Because it is guided a 250kg or even a 100-150kg will be enough against 100% of the targets they will find on the front. Kab-500 and bigger are used for wider targets like camp or tank groups but then 2 or 3 free fall fab 500 used with SVP 24 do the job for cheaper.

Can SVP-24 target in a good accuracy above the MANPAD effective range ?
Isos

Can SVP-24 target in a good accuracy above the MANPAD effective range ?

Probably. Manpad have a very short range around 6km and can't hit very high around 3-4km. I doubt you can lock on a aircraft at max range anyway. SVP shoulf be usavle above 5km.

The whole purpose of the bombing system is to allow level bombing above the effective altitude range of manpads and small arms fire...

Technically you could fit the system to a transport plane and adapt it with some sort of bomb thrower that hangs out the back of the plane in flight.

Imagine an IL-476 with a conveyer rack mechanism that holds hundreds of 100kg and 250kg bombs... in flight you open the rear doors and extend this mechanism out so that bombs in the rack can be moved down the rack system to the extreme rear past the open rear doors so when they are released they drop straight down... the next row of bombs can then be moved back and also released... assuming the rack and mechanism weighs 10-15 tons you could put 40-50 tons of bombs in each aircraft which could be rolled on to the aircraft and strapped in fairly easily.

With the accuracy of these aiming systems you could have special racks with bigger bombs... imagine an FAB-5000 bomb with a CEP of 5 metres... a 5 ton bomb landing within 5 metres of its point of aim to level an entire city block or destroy seriously heavy structures... and even more... how about four of them... or four FAB-9000s?

Of course most of the time range is just as important as payload... especially when you can achieve a level of accuracy that means enormous numbers of bombs are no longer needed.

You could carry FAB-100 bombs and monitor their accuracy to compensate for ground winds to make delivery of the bigger bombs more accurate... for a plane like an Il-114 or An-12 equivalent you could combine half payload of bombs and half of extra fuel to extend flight range and loiter time... for the An-12 that means 10 tons of extra fuel and 10 tons of bombs which should give it comparable range and payload as the Tu-22M3...

With internal bombs you don't need to worry about symmetrical bomb loads or asymmetric drag and just use one bomb at a time for each target.
ahmedfire

At 7min or so quite a loadout of AAM on the Su-30SM with its bombs. Sending a message to someone.

At 9 min or so, so that's what is on all those Syrian Express ships

Stand back and watch them kill each other. If there were soldiers inside then Erdogan is going to be pretty pissed off.

JohninMK wrote:Stand back and watch them kill each other. If there were soldiers inside then Erdogan is going to be pretty pissed off.

Or may be the intelligence is playing there

JohninMK wrote:Stand back and watch them kill each other. If there were soldiers inside then Erdogan is going to be pretty pissed off.

Or may be the intelligence is playing there

Russian MOD is getting their point across to Turdogan, that jihadists aren't people you should befriend. Wait till they start beheading Turkish soldiers, like they're preparing a Turkey roast.

Nice vids Ahmedfire... the huge white external fuel tanks the narrator walks past just after getting his icecream are for the Su-24s... they don't look that big mounted on the planes but they are huge when this guy walks past them... of course he is not the biggest guy around...
JohninMK The other side of the bridge. 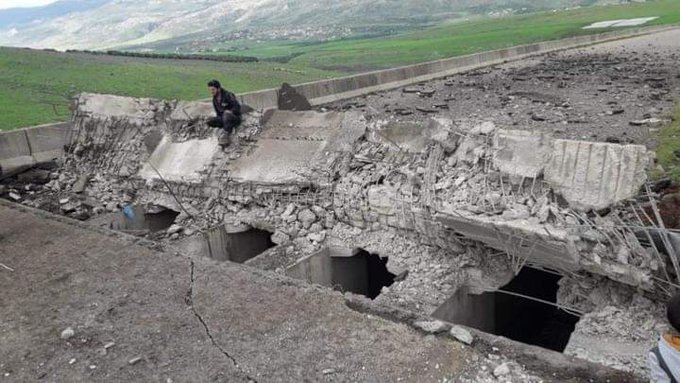 Look at the laughable/despicable propaganda of "Russian Occupation", Ru MOD specifically asked if the Syrian govt. requested help....but the same twats on Twatter would call ISIS/ISIL VBIED's mobile hospitals to defecate a narrative that works for them!

Nice vids Ahmedfire... the huge white external fuel tanks the narrator walks past just after getting his icecream are for the Su-24s... they don't look that big mounted on the planes but they are huge when this guy walks past them... of course he is not the biggest guy around...

This guy can fight ISIS alone 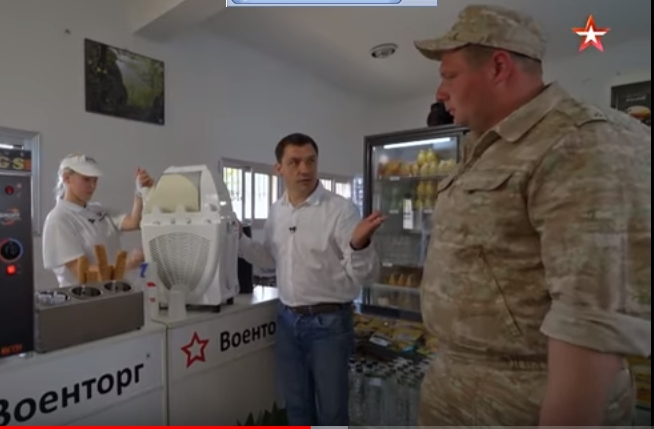 @Suriyak
@Suriyakmaps
·
21h
After 20 days since the sign of ceasefire agreement Turkey has built an important number of new outposts in Greater #Idlib reaching the number of 39 while 2 other ones were abandoned in M5 HW. In addition, #TSK is deployed in other towns along the M4 HW & Atarib-Bab al Hawa road 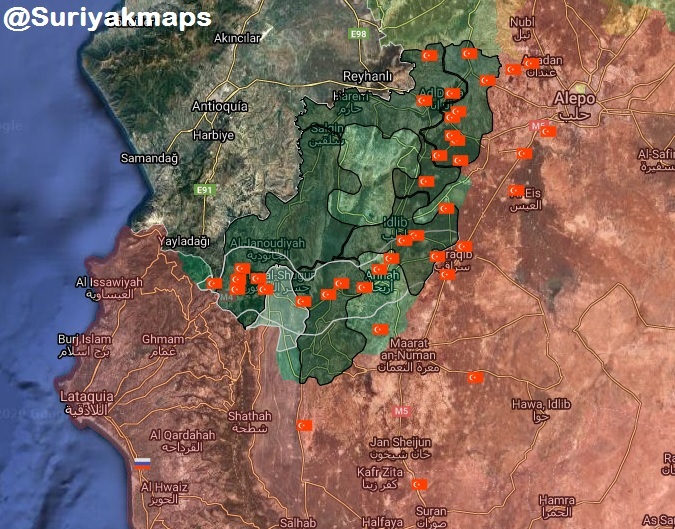 If coronavirus hits Turkey like it did to Italians, SAA may take advantage and destroy rebel positions and take all that land.
JohninMK

Might not cut it on a parade ground or Red Square but it seems to work. Function over form is the phrase.


Y.N.M.S
@ynms79797979
·
12h
As it turned out, this relatively simple and cheap defense, which, I must say, was highly appreciated by Russian specialists, saved the lives of dozens of tankers.

Its name - “Adra” - this modification received in honor of the city located next to Damascus. According to some reports, it was developed and completely executed by the Syrians themselves. They are equipped with additional boxes with filler and trellised anti-cumulative screens 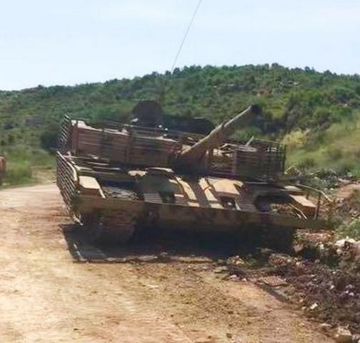 The added advantage of such rails is that it creates places where camo can be tied on as well as stuff that wont fit inside the tank like extra ammo belts for the machine guns and extra equipment and bits and pieces for the crew and troops operating with the tank...
JohninMK

The Syrian Arab News Agency (SANA) quoted the statement of the leadership of the Syrian Army as saying: “We issued two administrative orders ending the retention and recall for April 7th, 2020 of the reserve officers in the civil reserve who have completed three years or more of actual backup service until the date of 1 April 2020.”

The statement pointed out that “the end of retention and summons to specialized human doctors is issued by order of the Medical Services Department in accordance with the possibility of releasing them and for the ranks of retained officers and individuals who are enrolled in the reserve service before the date of 1-1-2013 who had their actual reserve service 7 years or more until the date of April 1, 2020 ..And for the ranks of the officers and individuals retained and the civil reserves enrolled who obtained a percentage of 30%, excluding those who have a backup call from them,” they added.

Over the past two years, the Syrian Army has sought to discharge several soldiers who have served in the military for several years past their conscription period.

Turkish destroyed one s-75 launcher and missed many times. Their drones appears to be shittier day after day. Not a recent attack. 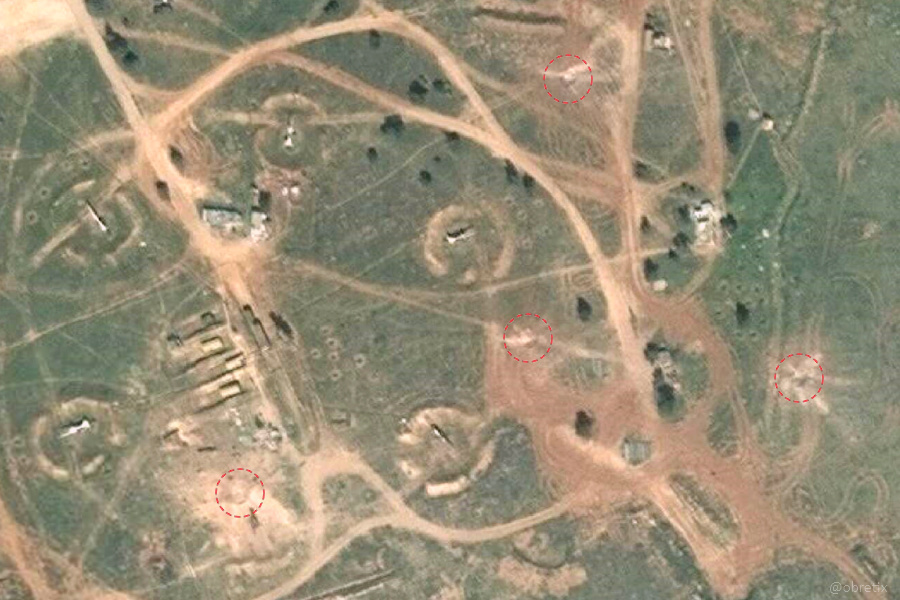 well it is not exactly the same thing...

Don't get me wrong,  tigr are useful,  but they are quite different than a Main Battle Tank...

It is like replacing a su25 with a trainer aircraft without armor and with more limited weapons...
Sponsored content