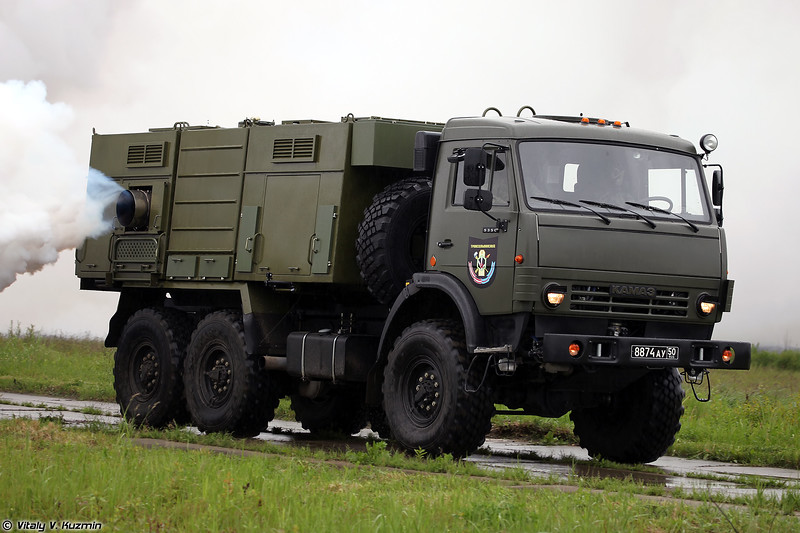 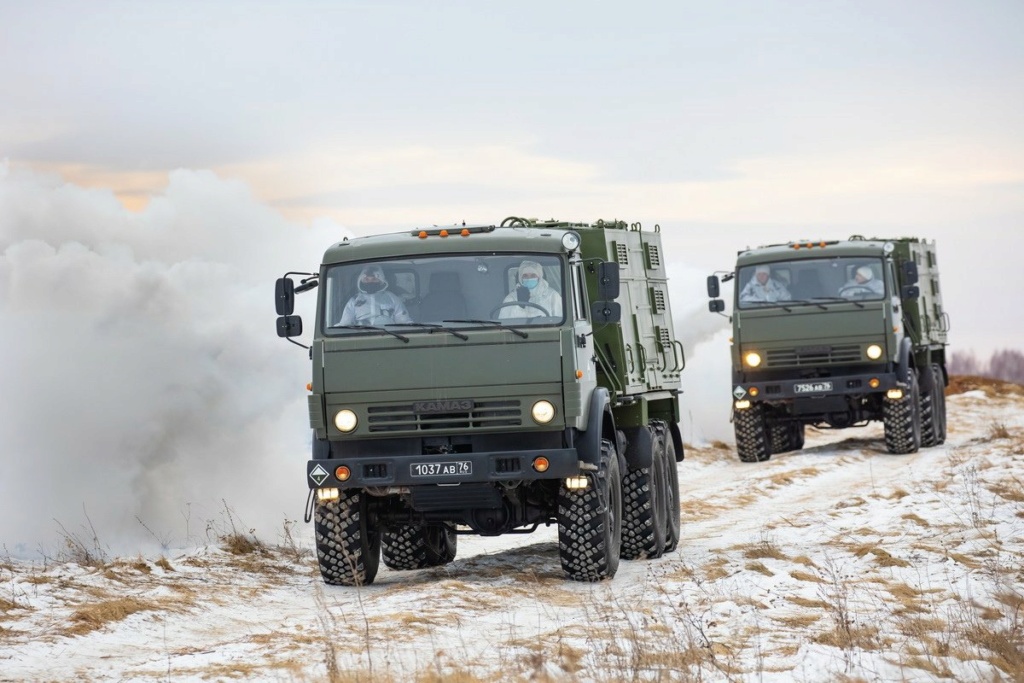 The TDA-3 is creating smoke to disguise things. Your pics are showing NBC protection vehicles, the first looks like the KDUD.

The TDA-3 is creating smoke to disguise things. Your pics are showing NBC protection vehicles, the first looks like the KDUD.

I got the photos from a reliable (when it comes to Russian weaponry/strategy) twitter user named 'Hans Schmulke':

Mindstorm wrote:
Two ТДА-3 aerosol-dispenser vehicles, has been successfully tested in one of the most important tasks entrusted to those systems : the blocking (for 4-8 hours) of any radar, visual and infrared observation of in-field divisions of C-400.


As said several times ,the operation of those unique vehicles represent in the today modern aerospace offense-defense dynamic a true strategic asset capable to offer an unilateral, unmatcheable, advantage to the defending side that increase exponentially at the grow of the density and efficiency of the IADs systems covered.

In facts each hub of the domestic multi-layered IAD, even without taking into account the air force component, thanks to:


require from the attacking side a truly immense commitment in terms of amount of always heavier stand-off ammunitions , EW assets , and penetration aids to hope to achieve the saturation of a particular IAD' hub.

When the IAD's command compute that an aero-space attack is so big to significantly surpass the saturation's threshold of an hub of the IAD, this segment do not waste any interceptor and instead its elements begin to cover and disperse.

Here the role of division level masking system, such as  ТДА-3, become crucial: in facts it completely deprive the incoming salvo of any terminal homing possibility  (visual-IR-laser and radar) for several hours ,usually 5 or 6, trasforming the attacking missiles, gliders or UAV in WWII level precision bombs .

When used in conjuction with strategic level GPS and NAVSTAR suppressing systems also big fixed targets can be rendered terribly resilient to the most titanic aerospace attack.

Multi-spectral opaque foaming machine. The same one you've seen wash/rinse Topol-M launchers. This one is still with it's primer exposed, before its camouflage has been painted on.

Have never seen the first unit before and not sure how it works from the pictures. Would be interesting to see it in action.
Hole

Don´t know how the KDUD (the green truck) works, but the brownish truck seems to be a cleaning vehicle like the UTM-80 with a remote controlled boom.
magnumcromagnon

Hole wrote:Don´t know how the KDUD (the green truck) works, but the brownish truck seems to be a cleaning vehicle like the UTM-80 with a remote controlled boom.


You're familiar with the concept of RAM coating, right? This thing gives you temporary RAM(and not just R) coating wherever, whenever, on whatever you'd like.

They simply spray the appropriate parts with foam from the nozzles, which, depending on the foam, then either hardens or jellyfies.

It's a multi-purpose vehicle. It could be used for NBC, or it could be used to apply multi-spectral opaque camouflage. Here's what he said about the KDUD vehicle:

Well, smokers are CBRN department. When it comes to Engineers, here's wunderwaffle of the week.

The thing transports and mechanically deploys chemical multispectral smoke generators all over the area, and controls them minefield-style.

The 'decontamination' title is an over-simplification of what these vehicles are capable of. They could be used for NBC decontamination, but they can also be used to apply multi-spectral electromagnetically opaque obscurants. 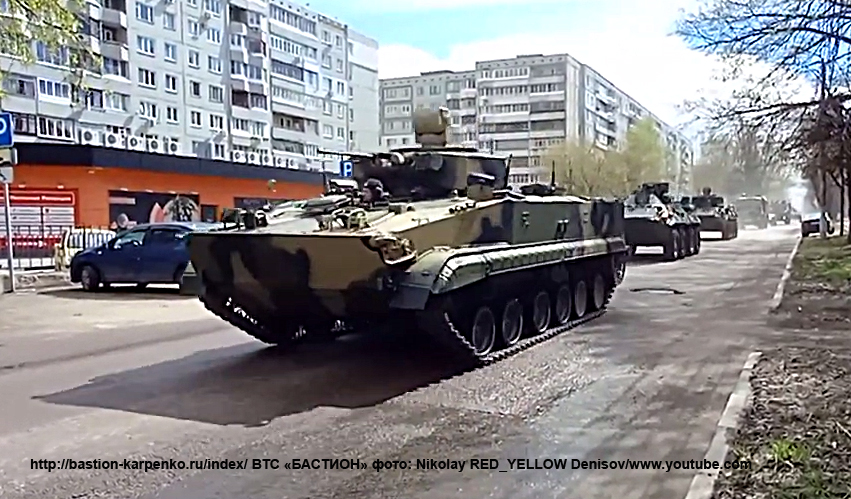 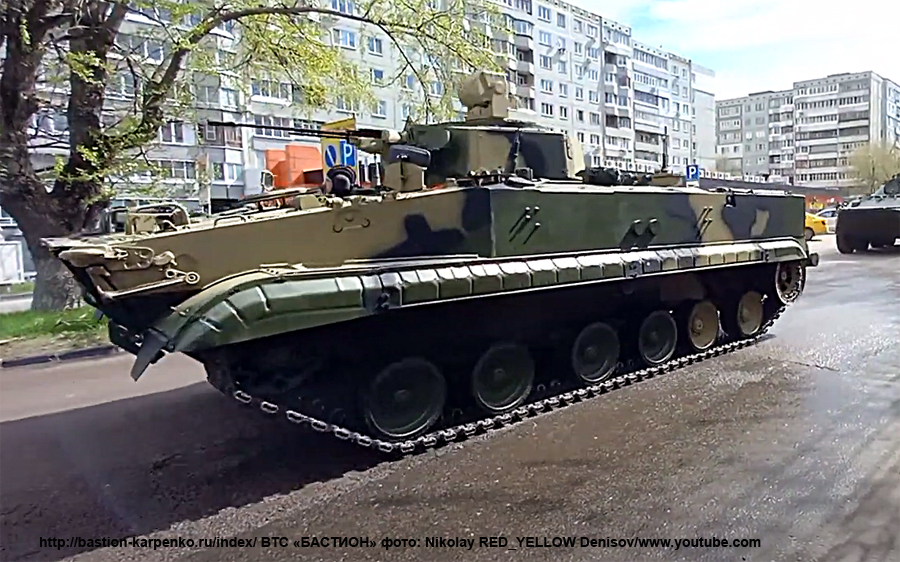 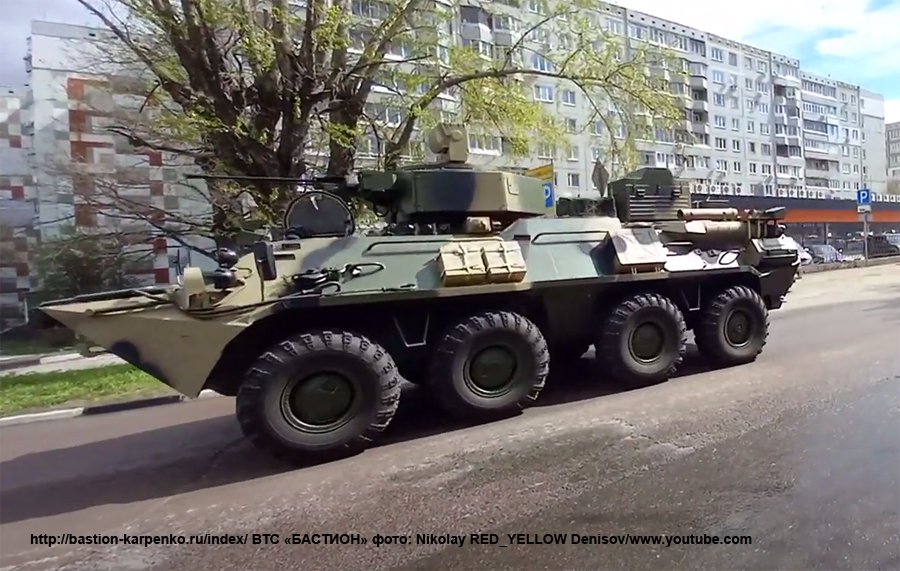