Director General of the leading Russian manufacturer of wheeled armored vehicles, Military Industrial Company LLC Alexander Krasovitsky, in an interview with RIA Novosti, Ivan Suraev, spoke about the tests and preparations for serial production of the latest Boomerang wheeled platform , the development of a new direction for the company - the development of tracked vehicles and other promising projects


MOSCOW, May 7 - RIA News. The forum "Army 2020" will present a sample of the new combat modules for armored vehicles, capable of destroying infantry, armored vehicles and low-flying targets potential enemy, said in an interview with RIA Novosti CEO of " Military-Industrial Company " Alexander Krasovitsky .
According to him, in the framework of the ROC "Boomerang", specialists are creating two remotely controlled modules: with machine gun and machine gun and cannon weapons. In addition, the enterprise "VPK" is engaged in the development of another remotely controlled combat module for machines in production, and promising samples.

“The main difference of our module is its high combat properties at an affordable price, it will be two to three times cheaper than similar products of our colleagues, not to mention foreign analogues. We want to get away from the practice when some developers offer combat modules, the price of which makes up three-quarters of the cost of the entire machine, "the source said.

The weapons complex consists, in particular, of a 30-mm automatic cannon with two-tape power, a 7.62-mm machine gun paired with it, a 30-mm automatic grenade launcher and two launchers of anti-tank guided missiles.
In addition, the new module will be equipped with a modern sighting and observation system with a thermal imaging channel, a laser rangefinder, independent stabilization of the line of sight in two planes and an automated fire control system. It can be installed on various wheeled and tracked armored vehicles, as well as light ships.

What they mean is that it is dual feed, so you can attach boxes of two different types of ammo to the gun and select which ammo is used with a switch in the gunners control panel.

Single feed guns means all the ammo you fire has to be the same in terms of ballistics. That is a problem because an HE round is better if it is heavy because the more HE it carries the more powerful it is and it does not really matter how fast it is moving as long as it can reach the target. With a kinetic armour piercing round then velocity and mass are important, so the ideal penetrators are super light metal darts moving at as high a speed as you can get from the propellent case.

The best ammo would consist of the 57mm LC grenade launcher rounds... big heavy slow HE round and small relatively light but dense and very very fast penetrator... the problem is that with a single feed weapon a belt of that sort of ammo would be terrible... all the AP rounds will go high and the HE rounds drop short... nothing would hit what you are aiming for.

The solution for a single feed is to make the AP and the HE the same weight and the same velocity... so the HE is less powerful because it is lighter than it could be and moving faster than it needs to be, while the penetrator round is much bigger and heavier than it needs to be but also moving much slower than it could be moving... but when you fire a belt of mixed rounds they all hit what you are aiming at. That is fine for AA ammo because aircraft are not very well armoured anyway so an APHE round is much more effective against an aircraft than an APFSDS round.

The 2A42 30mm cannon of the BMP-2 is fully dual feed so you select either APHE or HE Frag... when you select the ammo it also selects the ballistic chart for that round so the point of aim matches that particular round so you can fire APDS rounds or widely different ammo types...
medo

2A42 is dual feed 30 mm calibre cannon. Russia develop new ammunition for 30 mm guns. One is new APFSDS round and the second is HE-frag air-burst round with non contact distant fuse (kind of AHEAD or 3P for Bofors). 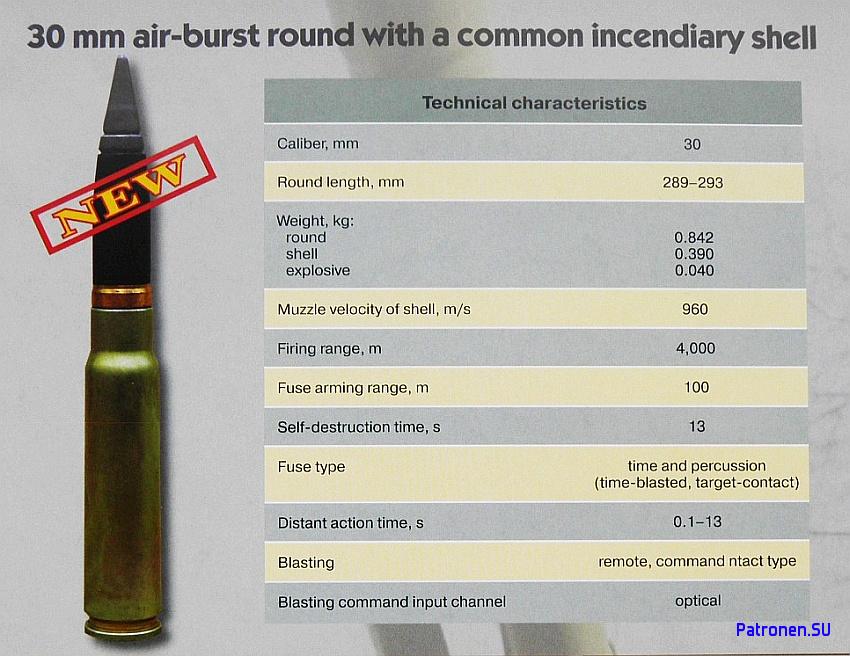 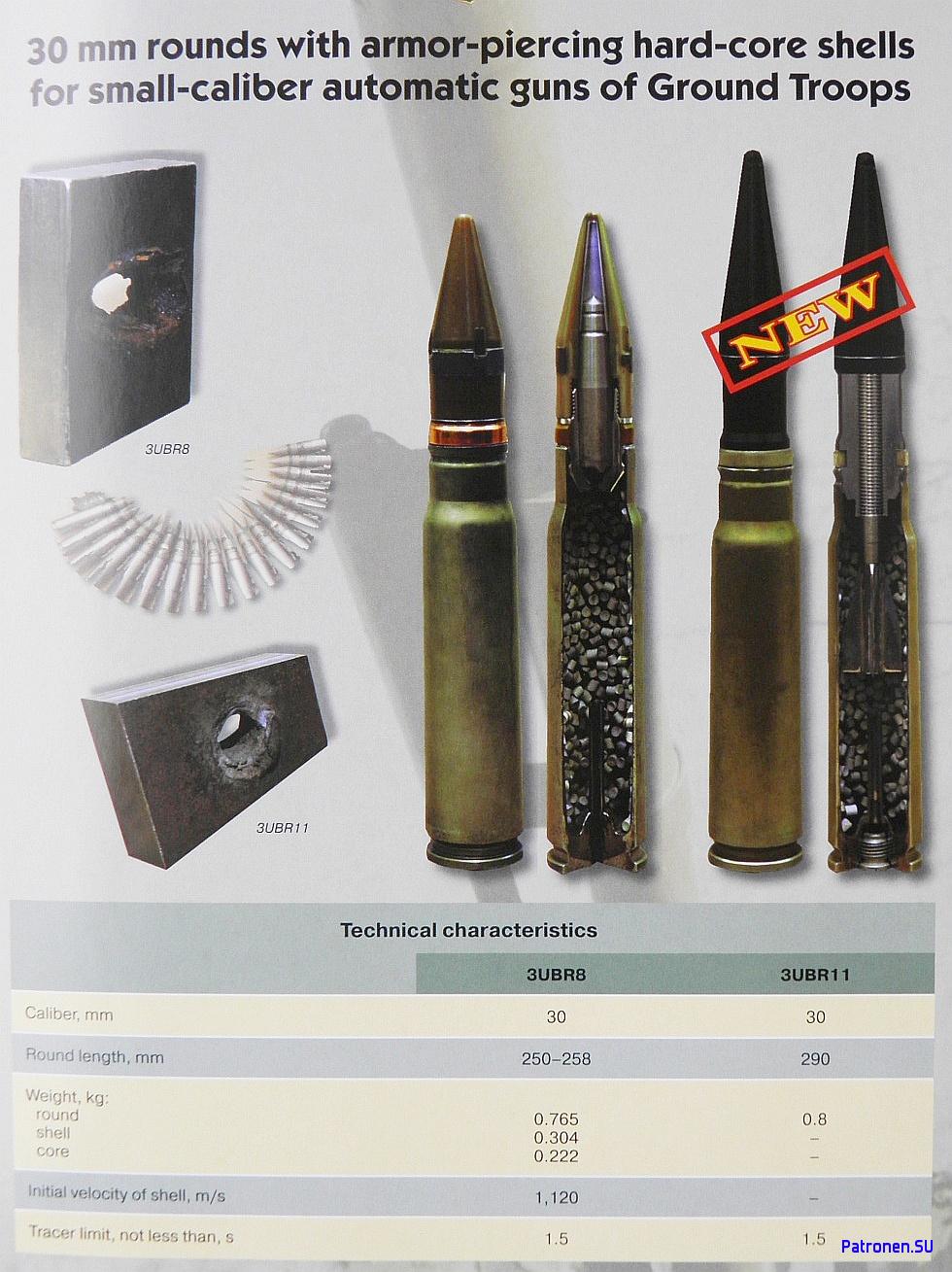 At first this new ammunition will be tested on BMPT. Later they will go to all BMPs, BTRs and BMDs. Air-burst rounds will be extreamlly effective in use of Tunguska and Pantsir, which will give new capabilities to their gun armament in use for self defense and to engage small drones and other small targets, which were problematic for older ammunition. Those new rounds will be also less expensive than missiles.

2A42 gun in BMPT is exellent choise. Its dual feed enable using both APFSDS rounds in one feed for armoured targets and the second feed of air-burst rounds to be used against infantry and airborne targets. Using both guns with high rate of fire will give enough air-burst rounds in the air to destroy any treat, including Javelin and Spike ATGMs and suicide drones.

The first air-burst round with programable fuse was made in 57 mm calibre and is tested since 2016. this round will be used by Derivatsia-PVO, but I hope T-15 will have it as well.
GarryB

To be clear airburst shells are vastly more effective than standard HE frag rounds, because the latter needs to contact the target to be set off, so even if it only misses by half a centimetre then it will just fly past doing zero damage. Airburst rounds are far more effective because even if they miss they can still do serious damage.

The critical problem with airburst is how you achieve an air burst.

For large calibre rounds you can use proximity fuses that emit a radio or laser signal... when a return is reflected back it is in proximity of something and boom. Such things can be jammed or interfered with but are relatively cheap and simple as long as there is space for them like in bigger shells.

For smaller rounds however space is critical because there is much less room.

Very accurate timers can be used but the level of accuracy needed is enormous... micro seconds of accuracy... which makes the timers expensive and therefore each round becomes fragile and expensive.

The US programme to make 20mm grenade launchers was based around a few features... the most important was the built in ballistic computer and laser range finder on the weapon mount and the high precision timers in the grenades so you lase the target and it deducts a fraction of a second from the flight time to create an air burst above the target. The problem was that the precision needed made the grenade expensive, which is dumb because you would be firing tens of millions of rounds from a few thousand launchers.

The image above... blasting command input channel.... optical... meaning no expensive timers... just a rear looking optical sensor... flash a laser at it and it blows up... simple and cheap so all the calculations and range finding can be done from the gun mount instead of inside each round.

Makes it effective and affordable.

Having said that 30mm cannon shells don't have a lot of HE capacity, but they have enough to make airburst rounds effective against drones and other light difficult to engage targets...

A hidden advantage is not often mentioned but an enemy drone flying around the place... firing up at it with a rifle calibre machine gun is actually rather dangerous because those bullets have flight distances of 4-5km and they don't just disappear if they miss or even if they hit the target. Air burst rounds on the other hand basically self destruct and present no serious danger to things on the ground...

Using the same fusing system on larger calibres makes them orders of magnitude cheaper and easier to use effectively... because the expensive timing components can be part of the vehicle instead of being part of the ammo that is destroyed when used.

It could even be used on heavy artillery shells like 120mm mortar bombs and 125mm tank shells and 152mm artillery rounds... the amount of explosive and shrapnel you could fit in a 45kg 152mm round that you could then fire into the middle of a group of attacking drones and then set off at the optimum time to destroy several at a time...
George1

Would like to see some aerial footage from a drone of a tank firing APFSDS rounds on such dusty terrain... would be interesting to see if you can see a dust trail along the ground from the turbulence created by the APFSDS dart moving at very high speed a few metres above the ground...
magnumcromagnon


The first photo of artificial snowdrifts to mask tanks appeared 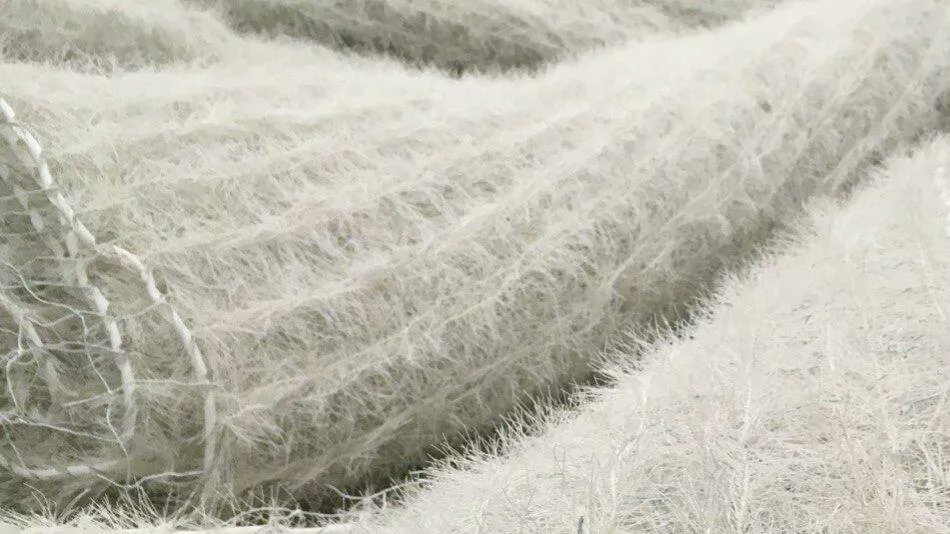 The holding "Roselectronika" published the first photo of a material of its own design to disguise military equipment as snowdrifts. The new coating absorbs electromagnetic radiation from radars by 99.5 percent and reduces the detection range by several times, since the reflected wave does not allow the enemy radar to correctly recognize a masked object.

The material is made of threads with a ferromagnetic microwire and is resistant to low temperatures.

- An experimental batch of coating has already been released, it is ready for mass production, the holding told RIA Novosti.

Parade in Moscow will be held at June 24!
dino00

MOSCOW, May 27 - RIA News. The Russian Ministry of Defense ordered the first pilot batch of new generation TOS-2 heavy flamethrower systems, deliveries will take place in 2021, the executive director of the Techmash research and production corporation (part of the management circuit of the Technodynamics holding of Rostec State Corporation , said in an interview with RIA Novosti ") Alexander Kochkin.

Earlier it was reported that the new TOS-2 heavy flamethrower system (better known as Tosochka) will be more compact than its current analogs, Solntsepek and Pinocchio, and will receive artificial intelligence.

“The Ministry of Defense has already ordered a pilot industrial batch of TOS-2 for conducting military trial operation. According to plans, we must hand them over to the state customer in 2021. At the same time, we are developing a set of new missiles for this system, the destruction range of which will be much higher compared to with the shells of “Solntseyok”, - said Kochkin.

The developer, in addition to changing the chassis from the caterpillar, on which the Sun is mounted, to the wheeled, significantly improved the combat characteristics of the new flamethrower system. According to the interlocutor, TOS-2 preliminary tests are being completed, prototypes have already taken part in strategic exercises

Tests have shown that the ammunition meets the requirements set by the customer, there are certain design nuances that are being finalized today. In the near future we plan to switch to state tests and expect that in 2021 the new TOC will go into production,” Kochkin added.