Well why would it have canards, if its a stealth aircraft?

Wouldn't it be more stealthy to go for thrust-vectoring?

Well first of all it depends on what the canards are made of, but at the end of the day you can go hard out super stealthy, or you can make a fighter plane that can manouver and get into a position to kill other planes and I suspect the Russian priority has been more the latter than the former... because the former is very very very expensive and not always guaranteed to be effective with their own anti stealth countermeasures of L band AESA radar and IR sensors and missiles.


Looks like a fan song of Mig to me scratch
They had to show something, so ... used some cardboard&glue on existing models Laughing

It is consistent with what they have been saying all along... low cost lighter LMFS programme will start when Serial production of PAK FA begins... this is the first MAKS after serial production of PAK FA started... we should have been expecting this, but if you want to pretend this is a desperate act from MiG then go right ahead... obviously they have been doing no research or design or testing and just pulled these models from their asses when they saw Sukhoi aircraft being leaked in the days before MAKS started

so overnight they came up with three designs and had models built and displayed them like they have been working on them for more than 10 seconds.


Mig and Su are divisions of the same company, at the level above them will be a co-ordinating group who's objective will be to ensure that there is as little expensive duplication, especially in the various design bureaus, between their divisions as possible.

This is true, but for there to be any point in having more than one division in that company designing planes then they all need to develop ideas and compete on every aircraft programme, except where there is a foreign customer that will pay for it all.

The Checkmate is an LTS design and is not an LMFS aircraft programme aircraft.


What we are seeing is what they want us to see, not what might be going on.

What we are seeing is Sukhoi playing all sorts of reveal tricks and hype and going overboard to sell a design that they clearly need to sell lots of to make it a viable aircraft programme. What we are also seeing is MiG showing models of aircraft that it probably has contracts for with the Russian military so not so much information and not so showy because they wont be for export for a while anyway.


I'm not one of the Mig bashers. I just don't see how an su 57 can be improved upon for a carrier application.

I am not a Sukhoi basher either.... if you look back at my posts I think they should make a navalised version of the Su-57... but I also think for space efficiency and operational efficiency a carrier group would benefit from Russias best fighter, but also from a smaller lighter bomb truck, or in this case a missile truck that has shorter range but is smaller so you can carry more and when stealth is not an issue that it can carry a real shit ton of air to air missiles because that is its function for the navy.... an airborne rather powerful radar able to use its own missiles... fly 400km rapidly out to investigate a radar blip and determine if it is an F-15 attacking the ships or a civilian airliner and act appropriately.

Having Su-33s only was not a good thing for the Kuznetsov because the Su-33s are single seat only so they needed Su-28s for landing and takeoff training... the Su-28 is not able to carry any weapons at all so is essentially only a training aircraft... the new MiG-29KR is fully multirole modern fighter than can be fitted out with one or two seats... you can swap between versions if you want... so the MiG does not just eliminate the need for the unarmed Su-28s but it also increases the number of aircraft the ship can carry because they are smaller and the LMFS will do the same on the newer bigger carriers.

Sukhoi are talking about two seat Su-57s... I hope that includes naval models for carrier based operations.


The metrics of success I see in these discussions are western marketing tripe.

It is pretty clear that Sukhoi is better in this case in western type marketing... from the strip tease of the prototype... there was clearly no reason to roll that plane around the airfield except to get it noticed... and get it noticed in a skimpy black miniskirt.... sex sells... but MiG might be being shy because it already has the job in the same way Sukhoi got the job for the PAK FA programme.

But the real problem is the focus... the land based LMFS is about low cost so in a sense a souped up LIFT jet trainer would be the closest you could get to such a thing, but for the navy what they essentially want is a next generation MiG-35 which is what that model clearly is, and of course both programmes will be requiring a jet fighter drone escort which is what that drone is... so it is all predictable and explained... but obviously if there are problems nothing is set in stone.

The thing is that the MiG LMFS and the Sukhoi LTS are both going to be 5th gen super cheap super low cost fighters, so in many ways both are going to be attractive to export customers for which even 4th gen fighters are becoming too expensive...
hoom

A twin engined Sujkhoi LTS with Canards... yeah it is terrible...

But it is not that.
We've seen a twin engined Sukhoi LTS already: the Su-57.
If Sukhoi was involved in this it'd look like a navalised Su-57 & that would be awesome.

Instead it looks like a pathetic minimal upgrade to 1.44, well deserving of scorn.
limb

The whole point of a single engined fighter it seems according to LMFS (the member, not the fighter project) was that a smaller lighter fighter will have better acceleration and manouver performance and just out turn and beat everything at close range in a knife fight...

Not talking about any single engine thing, this was presented by MiG as 'new' naval fighter 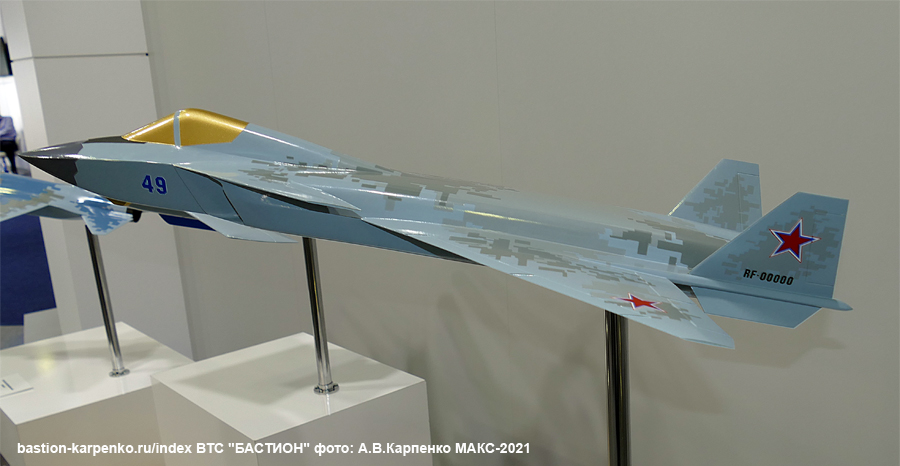 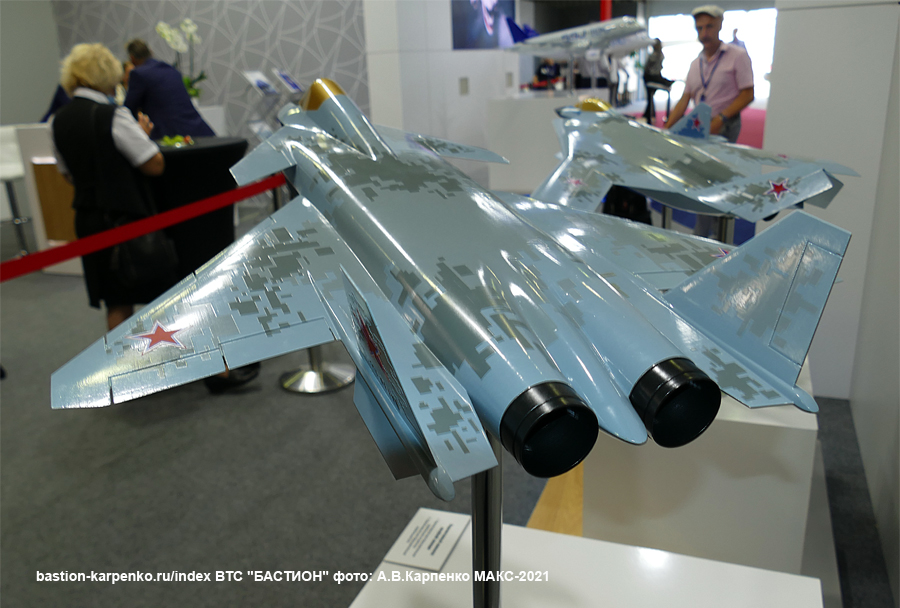 Its clearly based off MiG 1.44 minimally tarted up with some 'stealth' angles.

Hey maybe its the mythical stealthy 1.42 that garry keeps harping on about(the supposed aircraft chinese copied), which if true means they didnt do any designing and just plopped a classified 90s design.
Lurk83

They should forget about VTOL as a "prime" version. It should be developed as an afterthought. These planes are heavy and very expensive.
I can see UAV's taking over the VTOL role in the near future.

hoom wrote:...Its clearly based off MiG 1.44 minimally tarted up with some 'stealth' angles.

Hey maybe its the mythical stealthy 1.42 that garry keeps harping on about(the supposed aircraft chinese copied), which if true means they didnt do any designing and just plopped a classified 90s design.

The whole point of a single engined fighter it seems according to LMFS (the member, not the fighter project) was that a smaller lighter fighter will have better acceleration and manouver performance and just out turn and beat everything at close range in a knife fight...

Not talking about any single engine thing, this was presented by MiG as 'new' naval fighter

Its clearly based off MiG 1.44 minimally tarted up with some 'stealth' angles.

Hey maybe its the mythical stealthy 1.42 that garry keeps harping on about(the supposed aircraft chinese copied), which if true means they didnt do any designing and just plopped a  classified 90s design.

I prefer the way Mig does its IRST compared to how Sukhoi does theirs. The Sukhoi way isnt a problem but perception is worth something. It just doesn't fit the lines of the aircraft compared to the way Mig has it on the bottom

Instead it looks like a pathetic minimal upgrade to 1.44, well deserving of scorn.

You clearly miss the irony that the Su-57 looks rather more like the 1.44 than it looks like the Berkut S.37 FSW candidate from Sukhoi...

Where has the FSW gone?


Hey maybe its the mythical stealthy 1.42 that garry keeps harping on about(the supposed aircraft chinese copied), which if true means they didnt do any designing and just plopped a classified 90s design.

The laws of physics have not changed much... the fact that their design actually looks rather like the Sukhoi LTS except with more common undernose intake and a single engine makes such comments amusing... if they want to make a VSTOL version of the LTS they can't keep the air intakes where they are because a front mounted lift fan would need to go there and they would need conventional side intakes like the ones shown on the MiG design.

If they do it is to please some, but this model is the carrier deck model that is just about right.


They should forget about VTOL as a "prime" version. It should be developed as an afterthought. These planes are heavy and very expensive.

Totally agree... VSTOL is hard enough to get right on its own, but trying to also make it a 5th gen affordable aircraft is a bridge too far.

Take away an engine and it is not much different from the Su-75...

They could borrow the external shape, but they would then have to spend very long periods of testing to establish its performance envelope because they didn't design it so they wont know what it is. If on the other hand they paid MiG to help them with a quick and easy stealth design they could manufacture then that would make sense and explain the speed.

It is one thing to come up with the best design, but if you can't make it to the accuracy required to actually achieve stealth then it is a bit of a waste of time.