franco wrote:Timid hope. Does the Russian naval aviation have a future?......

So long story short their ASW sensors and aircraft are obsolete dogshit and they are dragging their feet in rectifying it?

It's just another "is there a future for x this or that in Russian army?" Bullshit you read every year from "experts".

ASW hasn't changed what they have is sufficient for time being.  If it still works, use it till someone better comes along.

It's as if people here think they are:
1) more smart than the Russian Mod
2) these "experts" actually matter and know everything in Russian armed forces.

I always laugh at these.  These experts are always useless cause they have access only to common knowledge and open sources.  Like we do.  We are just as much as an expert.

They say Naval aviation is unarmed??? It got some of the most modern equipment in Jets first. So there is clear misinformation.

If there is any truth in this it is beyond comprehension that countering the biggest military threat to Russia - is apparently the most neglected! That I find a bit hard to believe, but it is quite apparent that they are dragging their feet when it comes to replacing old maritime patrol aircraft. However I do agree with the author that it's not the type of aircraft that's important - it is the actual onboard systems that's the most crucial element.

Naval Aviation does need upgrading but so did every other area of the military. Work is ongoing and I'm sure we will see more in the future but other areas needed attention sooner.

franco wrote:Naval Aviation does need upgrading but so did every other area of the military. Work is ongoing and I'm sure we will see more in the future but other areas needed attention sooner.

Strategic deterrence (ICBM's & SSBN's) was always going to be prioritized for upgrades and new armaments, followed by the Army, Airforce and soon enough, the Navy.


And it must be emphasized right away that now, after the change in the leadership of the Naval Aviation of the Navy, positive trends have emerged in the real solution of its problems.

Next most important bit:


... the problems of our naval aviation are not really technical, but organizational.

Let's start with the fact that the research organization of naval aviation is included not in the structure of the Navy, but in the VKS (and the relationship between "ship" and "aviation" organizations is an extremely painful issue), and ending with questions of banal funding.

Is that actually a problem though... the aerospace defence forces have rather more experience making planes than the Russian Navy has.

I would think having airforce designed aircraft has been the best thing to happen to the Russian Navy... compare the Yak-38 and Yak-141 with the MiG-33 and Su-33 and MiG-29KR and the potential future Su-57 and that new model MiG carrier aircraft to something the Russian Navy could possibly fund and develop on its own...


The obvious priority of the Navy is submarines (in relation to which there are many questions on various kinds of problems and the effectiveness of spending). A much lower priority is surface ships, and aviation is simply in the role of a stepdaughter.

Right now that is how it should be, but as they fill out the submarine fleet then surface ships able to operate in Russian waters are the biggest priority at the moment for the surface fleet... once Frigates and Corvettes are cleared for service and serial production of 20 to 30 of each type are starting serial production... then it makes sense to lay down a destroyer design and a cruiser design to move forward with operating beyond Russian waters... all the while expanding the civil maritime fleet too.

Aviation can wait till they have new carriers laid down and should probably be a naval Su-57K and probably a 5th gen stealthy carrier based MiG-35 equivalent as shown in model form at the last MAKS.

Checkmate is a cheap affordable 5th gen numbers aircraft... there is little value in making a carrier based version except for countries with small carriers that want something cheap to operate from them.

No point in building a 80K ton fixed wing carrier with cats if you are going to go cheap on the planes that defend it.

Like buying a Lamborghini and using a beer bottle lid as the badge on the bonnet.

So what the rest of the article basically is complaining about is that the current weapons and equipment are obsolete and also at the same time too expensive to actually use so their experience and testing is not realistic because they don't practise with the real thing often enough to know if it works properly or not.

The Ka-27M is not upgraded to a suitable level because they are focusing funds into the new replacement helicopter called Minoga.

Lots of whining about the new Kasatka system not having a high enough resolution to find quiet subs using obsolete sonobuoys making it worse than the Sea Serpent system they haven't deployed widely yet because of cost despite India getting it 15 years ago.

So they need new modern low frequency sonobuoys and the new Kasatka system and the Minoga helicopters and upgraded air launched torpedoes and new torpedoes for their subs... all of which seem to be on their way so all he is really complaining about is that the Aerospace forces control development and funding of their aircraft... how butt hurt he is to take such a long article to put forward such small concerns.


Strategic deterrence (ICBM's & SSBN's) was always going to be prioritized for upgrades and new armaments, followed by the Army, Airforce and soon enough, the Navy.

Agree totally and it is the logical and sensible thing to do, but over the next 20-30 years the focus is going to shift away from the air power and land forces and start to focus on the world access that only the navy can achieve for Russia and its expanding trade partners around the world will require contact and access too... and perhaps some sales of naval vessels as well.

The western equivalent of this article is the sky is falling, the Soviets/Russians/Terrorists have better stuff than we have and we can't dominate them like we want to be able to... so add a few zeroes to the end of the next few years budget for a decade or so so we can catch up.
GarryB

I think the Navy is much better off having carrier and land based fighters and aircraft developed by the Air Force because the level of commonality with the Su-57 for the heavy fighter and the MiG-35 or 5th gen replacement simply make sense to be based on those land based aircraft and will be much cheaper than coming up with any fighter on their own... especially a half arsed VSTOL piece of crap.

In terms of Helicopters the situation has blurred somewhat with Mil used to be for land/Army and Kamov used to be for Navy, but even then there was the Mi-14 for the coastal forces.

These days both Mil and Kamov do both land and sea models including Ka-52K and Mi-8/17 which presumably would eventually be replaced with a Mi-38, and of course the Ka-226 which will also be used land and sea... and the Ka-31 AEW platform.

Any progress the new Ka-65 Minoga deck helicopter? I think the picture of the prototype below dates back to 2019 but still no show? 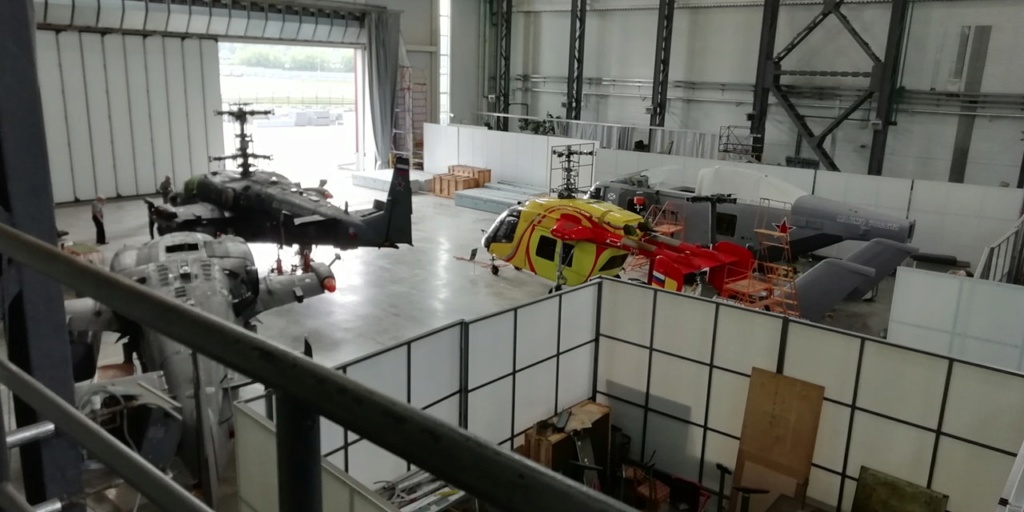 If there is any truth in this it is beyond comprehension that countering the biggest military threat to Russia - is apparently the most neglected! That I find a bit hard to believe, but it is quite apparent that they are dragging their feet when it comes to replacing old maritime patrol aircraft. However I do agree with the author that it's not the type of aircraft that's important - it is the actual onboard systems that's the most crucial element.

I would say the thing holding up new maritime patrol aircraft as well as helicopters and lots of other aircraft types is engines, which is being worked through.

MPAs have expensive contents and there is little value rushing some piece of crap into service only to replace them in 5 years time with a brand new design with four times the flight range because their new engines are state of the art...

Equally with helicopters, the right engine is critical in terms of performance, and hopefully the delay in putting the Mi-14 back in to production is because instead of the Mi-14 based on the Mi-8 it is going to be the Mi-438 based on the Mi-38 transport aircraft with newer engines and better performance and a fully sea surface operating hull... perhaps with extendible outriggers to prevent it rolling in open sea conditions... the engine power of an idling helicopter uses much less power and allows much better endurance than the engine power of a hovering helicopter, and using a dipping sonar from the sea surface would allow the different sea layers to be checked for targets hiding deep...

With more modern electronics and newer lighter weapons it would be a very good coastal anti sub helicopter...
Finty

Good article on the development of the Su-33