The Russians are smarter than to just replicate what the US does...

Their response to US militarisation of space could simply be to place a small nuclear device in every object they send into space from now on.

Any BS from the US and WWIII starts doomsday devices will continue to hit western ports and regions for the next 20 years and all Russian satellites will start spreading debris in the heavens above destroying US equivalents and blocking space from use for everyone.

I wonder when we will see s-500. We have been hearing for it a decade now

George1 wrote:I wonder when we will see s-500. We have been hearing for it a decade now

We have been hearing about US hypersonic weapons for decades.

"The fact is that state trials have begun and today the S-500 configuration, its simplified configuration is already available and work is underway to purchase parts for its serial production," the deputy prime minister said.

The deputy defense minister said in December 2019 that the preliminary tests of the S-500 anti-aircraft missile system would begin in 2020 and the commencement of its serial deliveries to the troops was scheduled for 2025.

Russian Defense Minister Sergei Shoigu earlier said that the deliveries of the latest S-500 surface-to-air missile systems to the troops would begin in 2020. Russia has been training specialists to learn to operate the new system at the Military Academy of the Aerospace Force in Tver since 2017.

Russia is developing the S-500 with a view to its operation in the next 25 years. As the Western media reported, the new Russian missile system struck the target at a range of 481.2 km or 80 km more compared to any existing missile system.

Without a direct quote from Shoigu I will not take the claim that he said it would be deployed in 2020 seriously.
Sounds like the usual journo-tardia where Shoigu's statement was twisted.

So the systems have been produced and are in second stage of testing. This is like with the PAK-FA. It was produced
but did not enter service until years later. Shoigu would know the difference, journalist hacks wouldn't care about
such details.

Yeah, when pak FA flew, we all only realized the design when it was initially seen in a background as a model toy on Sukhois general directors desk a year or two previously.
George1

All tests "Almaz-Antey" have long been completed, said the head of the state corporation "Rostec" Sergei Chemezov

All tests "Almaz-Antey" have long been completed, said the head of the state corporation "Rostec" Sergei Chemezov

So all of the stories linked upthread are BS. This is not surprising. There are many liberast maggots in the Russian MSM.
This includes Sputnik which uses NATzO propaganda language to describe Russian and Venezuelan politics.

The government should crack down on these 5th columnists. Kommersant, NG, etc. need to be shut down and "state run"
media fully purged. Trying to protect some non-existent image abroad is utterly pointless. The NATzO fake stream media
feeds its lemming audience that Russian media is all "state run". Well, then, make sure that is the case since there is no
benefit having 5th column pro-NATzO mass media in Russia. 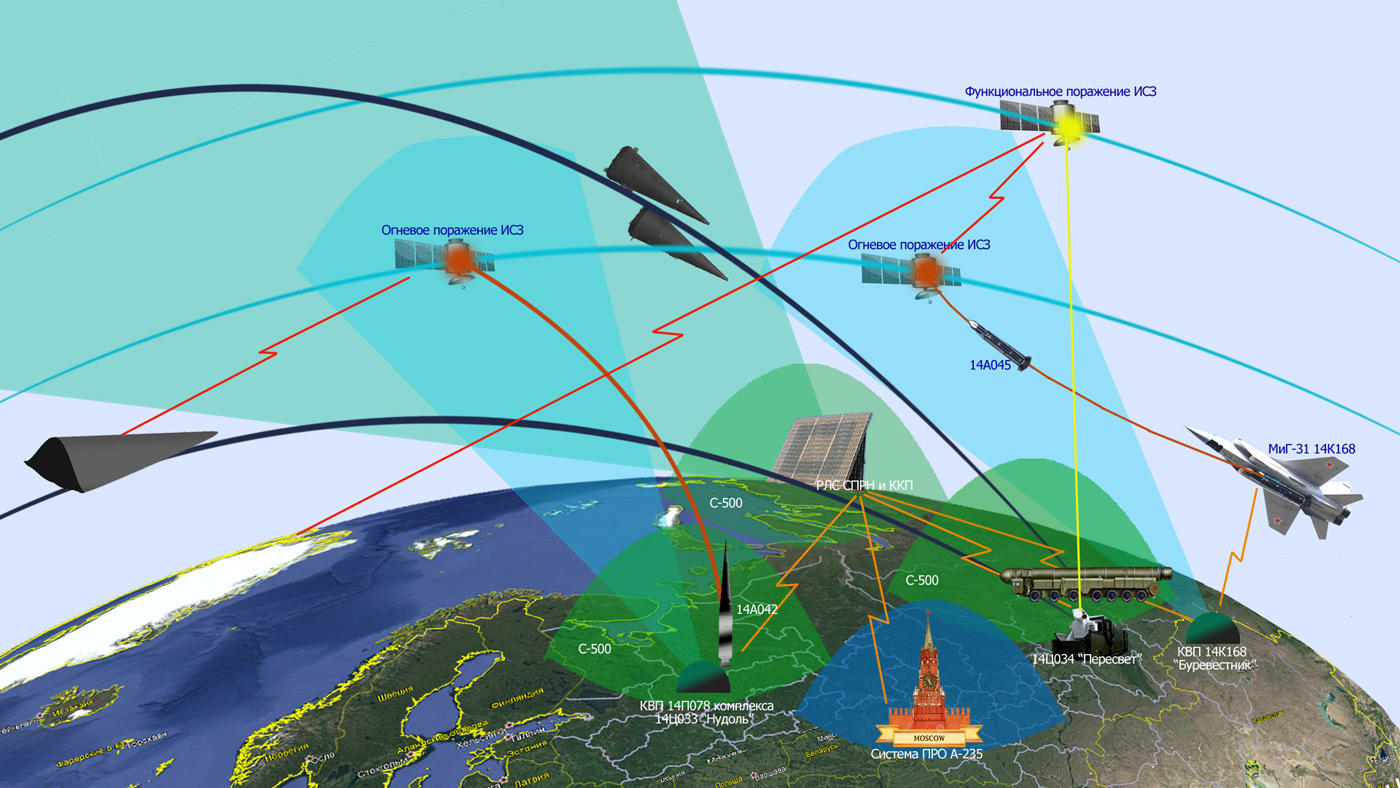 In the picture it is blinding surveillance satellites

GarryB wrote:The Russians are smarter than to just replicate what the US does...

Their response to US militarisation of space could simply be to place a small nuclear device in every object they send into space from now on.

Any BS from the US and WWIII starts doomsday devices will continue to hit western ports and regions for the next 20 years and all Russian satellites will start spreading debris in the heavens above destroying US equivalents and blocking space from use for everyone.

Asymmetric responses have value. But there is no solid argument against scale. Russia can afford to make many ICBMs and the whole
bankruptcy narrative is delusional American propaganda. They drink the koolaid that Reagan bankrupted the USSR. Only in their
Technicolor (TM) dream delusions.

START gave the Americans the notion that they could limit Russian ICBM and warhead numbers by treaty while deploying all sorts
of other systems to neutralize Russia's strategic nuclear defense. The ABM shield was the core of their fantasy. But it actually
had legs since it would work against a limited number of 1970s style quasi-ballistic warheads. Russia snookered the clowns
by deploying fully non-ballistic warheads. But that is not enough. Americans need to be made to fear the effect of large numbers.
With large numbers even the most effective tricks become meaningless since a few percent of the warheads making it to America
will be more than enough to fully glass it.

Recall that during the 1980s the US still had some fear of the Soviet ICBM arsenal. Since then it has brainwashed itself that it
can win a nuclear war.

No, the reality already sunk in: the sea based Zircons from 800km away can destroy ABM radars, TAKAMO planes' airfields, the Pentagon/White House & C&C centers in a matter of minutes, before the leadership have time to get into their bunkers. After these decapitation strikes, ICBMs can be used to take out US IC/RBMs & SSBN/AF bases.
GarryB

The thing is though that now that they have nuclear engine powered cruise missiles things really change.

Your average cruise missile spends most of its flight at medium altitude to increase flight speed and range performance, but it is vulnerable to detection and interception at such altitudes and speeds so as it approaches enemy airspace it drops down and flys through mountain passes and along hill tops to evade enemy defences... it flys slower and the low altitude flight dramatically reduces its range performance but it is necessary to stop it being a sitting duck and get decent flight range.

With nuclear propulsion it can fly all day every day at low altitude because flight range is no longer and issue, and over time improvements in design should allow rather significant improvements in flight speed as I would guess using nuclear reactors to provide the heat rather than burning fossil fuels means we are talking a ramjet... and more importantly a ramjet where combustion does not take place which essentially makes it a scramjet.

This means enormous speeds are potentially possible even at low altitudes, but even mach 3 at very low altitude would be very difficult to counter because not many things move at mach 3.

A 5.56mm rifle bullet does but probably only for about 50m out of the rifle barrel before it slows down to much lower speeds...

Air to air missiles and SAMs would struggle to hit targets moving that low that fast... and these missiles could be the size of current cruise missiles so standard carriage trains could carry enormous numbers of these sorts of missiles with a global reach...

A modular design means you could build enormous numbers and over time as the technology improves you could take out the old nuclear propulsion system and fit fuel tanks and a small jet engine and conventional warhead and use it in places like Syria or Libya and produce nuclear models to replace it so they don't become white elephants that you make and never use like the 100,000 odd MBTs the Soviets made during the cold war.

The next step would be adapting the nuclear propulsion for long endurance patrol and surveillance aircraft. Something like a Global Hawk with weeks if not months worth of flight time or better yet a stealthy MPA Okhotnik that could scan the oceans for enemy battlegroups and provide persistent yet hard to detect and eliminate surveillance and eventually target designation.
Sponsored content