Yes, but not connected to the turret internally.

It has 10 rounds of ammo spaced out and designed with max safety if hit.

You have to get out of the tank to load those rounds into the tank for use in the gun... 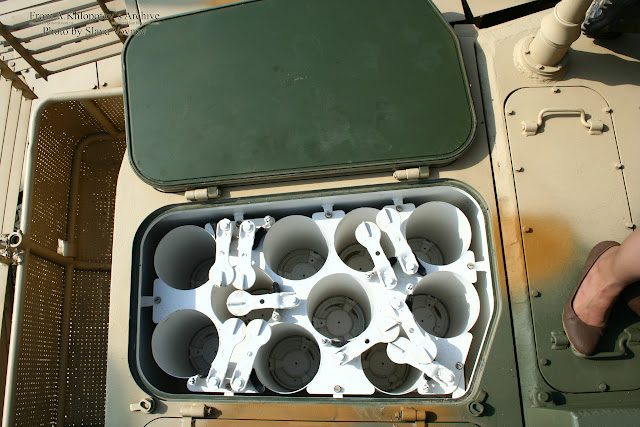 Note the propellent stubs fit into these round holders while the outer area is filled with water so if one catches light there is a water barrier between rounds to contain and absorb the heat... I believe Sherman tanks during WWII did the same... hatches on either side of this centre section contain the projectiles... 5 on each side...

Does this mean that they'll stop producing T-90M until new contract is signed?
lyle6

Probably clearance space constraints; anything you attach in that section must not be any further than the idler wheel - or it will get ripped off when the tank tries to climb obstacle. And the Kontakt-1 container is the smallest one for ERA you can find.

What kind of a dumb question is this? Stopping production in the middle of WW3

Fishing for a contract of course... question is, do they want more ATM.
Hole

If you hamper the defence/war efforts Medvedev will come to you. With a sledgehammer.

They are not refusing to make more, they are merely pointing out that they don't make them for no reason and the current contract with the Russian military has been completed... to continue production they need another contract...

The only negative in my view is that they see fit to try to get new contracts via the media... or perhaps there was another reason behind the announcement.... like that we are producing them so fast we are completing our contracts very quickly and running out of contracted work orders...

There's no reason to mystify anything. They always anounce conclusion of the contract. Also, every time that happens last vehicle carries a Christmas tree. My question was a simple one and was if anyone knows was there a following new contract.
Of course, as everything in this forum, it can't go without drama. Small suggestion for all Western Russophiles is to learn some basic Russian.

They are saying that they fulfilled that contract. Does not mean that they have not received others.

You don't need Russian to know that they would always have another contract prepared for further orders of a very in demand product. Its fucking war, what kind of a war doesn't have tanks in it?

@franco
Sure. As it doesn't mean that they did. Hence the question.
galicije83

As i mention log time ago, without APS tanks no mather how they are good with armor and ERA on them are still easy target for enemy modern ATGM. We see how one of the 2 tanks was destroyed today becaue he did not have APS on it...APS, Thermal sight for gunner commander with drones are must for any tank and IFV....rest is history...

Also revers speed of T-72/90 tanks are BAAADDD as we can see in this video, second tank are slowly moving back....still Russians didnt manage to put more revers gears in this tanks...oh i know they do not have to much space for transmission back so they are stick with this type of transimission with only 1 revers speed instead of 3-4...

Also no support for IFV with infantry when they attack this kind of lines...

The carousel of the T-90M has metal + aramid fabric armor. What kind of munition couldve hit it to be able to penetrate it?

BTW theres 2 T-90M in the video. The leading one is hit, and the following one reverses very very slowly, at around 5 km/h.
Azi

And there is the point that Russian Air Force should carbet bomb the whole are with cheap dumb bombs to annihilate enemy infantry! This is the only thing i don't understand...why not throwing bombs from height out of Manpad range on enemy troops? Ukraine should have no Buk or S-300 left anymore for frontline duty.

At least the T-90M doesn't boil, it just smokes. But good decision by the crew to leave the tank, human lives are more valuable. The front line is very static, the tank can probably be refloated quickly if you can tow it.

Unfortunately they do not have APS. With it it will be different story on battlefield...
caveat emptor

At least the T-90M doesn't boil, it just smokes. But good decision by the crew to leave the tank, human lives are more valuable. The front line is very static, the tank can probably be refloated quickly if you can tow it.

It only has parts of Shtora-M complex installed. There was talk that Arena-M would be installed, but they didn't go for it.

I am still amazed at the ability of some people to differentiate T-64 from T-72, T-80 from T-90 in low resolution video shot at long distances.
Literally most videos of "Russian tanks" being destroyed, it is impossible to identify which MBT model, let alone who it belongs to.
Even if the tank in the video is indeed a T-90M, would this be that the fourth or fifth T-90M lost?
There are what, 100 T-90Ms in total?
At this rate, Ukraine will need another 20 years to destroy the rest, not bad for a tank that doesn't have APS or reverse speed...

Is APS that expensive not to have it installed on T-90Ms? Russian APS systems have been developed since the late 90s, such systems should be a staple in most modern Russian tanks already.
GarryB

We have talked about APS before, it would be more problems than it would solve in their current form... the radar they use to detect incoming threats can be detected and tracked... the equivalent of broadcasting where all your tanks are and what they are doing... opening yourself to more ambushes and more danger.

If the APS is effective then the enemy will simply shift to IEDS and land mines.

That reverse speed is bad, but even if it was T-14, it would meant nothing in this situation. Tank was hit, it seems MG ammo cooked off, internal fire was controlled by fire suppression systems, so even later Ukrainian video tank simply smouldering. I doubt it was AT-4 hit, but it seems the damage was indeed done under the turret.

As I see, real weakness of this tank is how russians employ it.

Many times we seen this, lone tanks getting hit until they are damaged or destroyed. Russians don’t use designated recon vehicles anymore (BRDM usage is mostly by Ukrs) they are unable to shadow their movements with drones, and again, they sent a pair of tanks to prepared enemy position and pre-shot grid (It wasn’t an ambush)

T-90M should have very high combat awareness due to thermals and battle management systems (perfect during winter season) and technically, it wouldn’t need recon vehicle supplementing, but having extra designated eyes would eliminate the need for soft infantry in the open field. BMPT would be perfect. If they would have dual optics drone available, they wouldn’t even get in this situation to begin with.

Tank is fine, but **** ups like this tarnish the name of the tank. Every single T-90 loss video is the same like this… headless chicked driving towards enemy by one or two tanks. Can’t even blame the crew training (I bet it’s good), that’s operational fuckup.

Unfortunately they do not have APS. With it it will be different story on battlefield

Yes, they would just get destroyed closer or when APS is expended. Technology can’t fix stupid tactics. The way Russians employ their tanks look nothing like they do in Vostok exercises and makes tanks very vulnerable to all the elements. They are no longer an armoured fist, but a lone middle finger. Good to harass, punch a small hole or two, but that’s about it. Here’s the first. 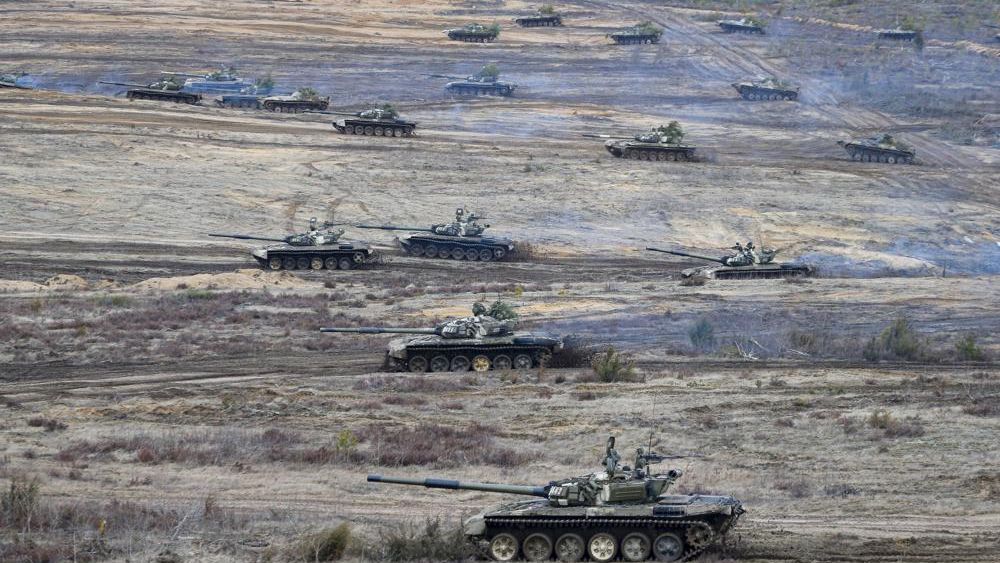 Post Regular Today at 5:44 am
As I see, real weakness of this tank is how russians employ it.

Oh, how fantastic is to have a Malinovsky Academy graduate among us!
Which year did you graduate?
Or was that Общевойсковая академия Вооруженных Сил Российской Федерации already?
Maybe you even know Kim in person?

So GarryB, you think in modern warfare were we have drones for scaning the fields when fight is going, you say APS and his radar is problem because enemy will known were are your tanks and what they are doing, because of radar signiture. Well they already know they are because of drones, so why is radar problem then.

Let them use new tactics, still you will have advantage ower them, because ATGM will be uselles against tanks because aps will kill it. Mines, you can always put on tanks mine diggers or how you call it and with them mines will be digg and move on side.

APS is future on any combat vechicle, not just on tanks...APS with 360° protection...
Regular

Do I need to be academic to see other than a bad pattern of tank usage? Check videos available from both sides. What I am missing by seeing visual evidence of multiple identical situations that you can see?

Russian army does trained different than they fight, no?
All the losses, ATGM hits, all are on solitary and unsupported lone vehicles. Was there ever a “rota” sized push by tanks? Because Russian Vostok (don’t tell me it’s for the show) multiple BTGs are organically employed, there is no room for headless chicken rushes with not even a full “zvod”.. and yet, multiple footage and interviews state how it is. 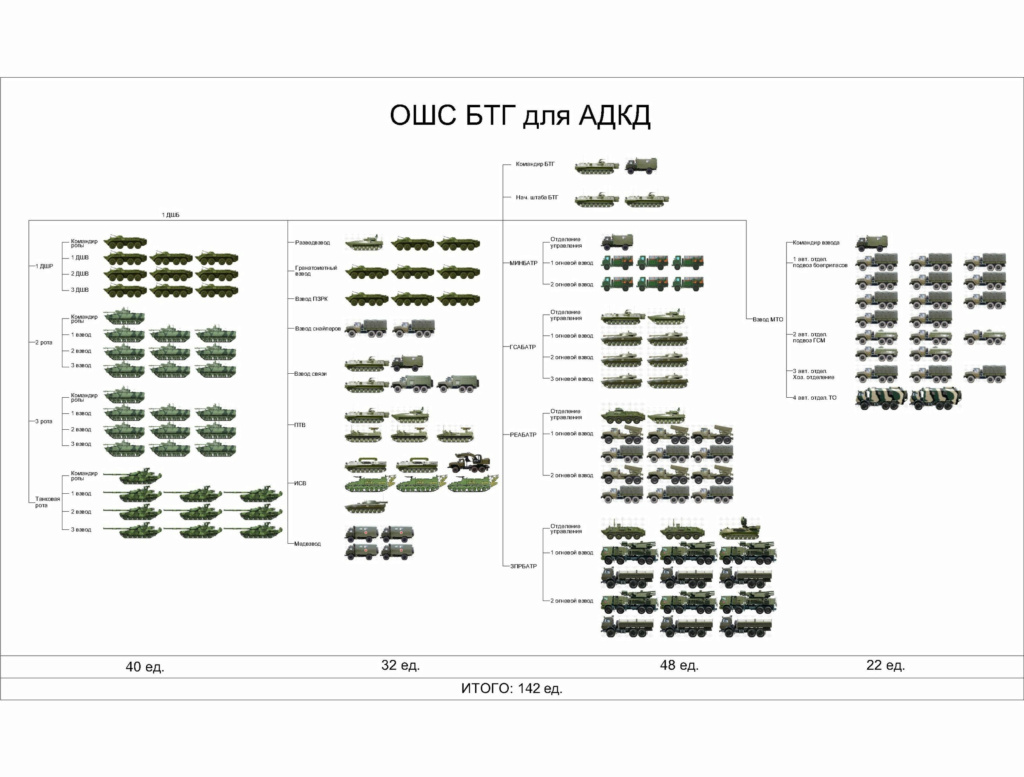