bmpd
August 25th, 1:19
As reported by the TASS news agency, the Ministry of Defense of the Russian Federation signed more than 40 state contracts for the supply of more than 1.3 thousand weapons and equipment worth over 500 billion rubles during the 7th International Military-Technical Forum "Army-2021". This was stated by the Deputy Minister of Defense of the Russian Federation Alexei Krivoruchko following the signing of contracts on August 24, 2021.

"Today, four were awarded and 41 state contracts were signed with 27 enterprises of the military-industrial complex for more than 500 billion rubles," Krivoruchko said.

According to him, the signing of this package of contracts will become an important stage in the implementation of the State Armament Program. "As a result of the fulfillment of these state contracts, the RF Armed Forces will be replenished with more than 1,300 new models of equipment, overhaul and modernization of over 150 units of weapons, military and special equipment will be carried out," the Deputy Minister concluded.

Our blog has compiled an approximate list of the contracts signed at the Army-2021 forum (based on TASS data, press releases and other resources):

- Contracts for several years with JSC "Scientific and Production Corporation" Uralvagonzavod "for the supply of tanks T-90M and overhaul of T-90 tanks to upgrade to the level of the T-90M.

- Contract with JSC" Ural Plant of Transport Engineering "(UZTM, as part of JSC "Research and Production Corporation" Uralvagonzavod ") for the supply of a serial batch of 152-mm self-propelled howitzers 2S35" Coalition-SV ", executed on the chassis of the T-90 tank.

- Contract with JSC "Scientific and Production Corporation" Uralvagonzavod "for the supply of a serial batch of heavy flamethrower systems TOS-2.

- Delivery of a heavy assault robotic complex "Shturm" developed by JSC "Ural Design Bureau of Transport Engineering" (UKBTM, a part of JSC "Scientific and Production Corporation" Uralvagonzavod "), based, according to open sources, on the platform of the T-72 tank. is about a prototype.

- Contracts with Concern Kalashnikov JSC for new batches of AK-12 assault rifles with delivery from 2022.

- Contract for the supply of a new batch of hypersonic missiles of the Kinzhal aviation complex (apparently, with JSC Scientific and Production Corporation Design Bureau of Mechanical Engineering)

- Contract with NPO Mashinostroyenia JSC (as part of KTRV) for the supply of 3M22 naval hypersonic missiles of the Zircon complex ".

- Contract with JSC Concern VKO Almaz-Antey for the supply of the next batch of 3M14 cruise missiles of the Kalibr ship complex.

- The contract with JSC Russian Helicopters for the delivery of the first 30 Ka-52M combat helicopters in 2022-2023 (as the first part of the framework contract for 114 Ka-52M).

- A contract with the UEC for the supply by 2024 of eight additional NK-32 engines of the second series for the Tu-160M ​​strategic bombers.

- Contract with JSC "Zelenodolsk Plant named after A. M. Gorky" for the construction of two medium reconnaissance ships (presumably based on the hull of a small sea tanker of project 03182)

- Contract with JSC "Sredne-Nevsky Shipyard" for the construction of another base minesweeper of the project 12700 (apparently the ninth in the series, with serial number 529).

- Contract with JSC "Corporation" Moscow Institute of Heat Engineering "(MIT) for the supply of a" mobile complex of command missiles "(apparently," Sirena-M "based on the missile complex" Yars-M ").

- Contract with JSC "Plant of radio-technical equipment" (JSC "ZRTO", part of JSC "Concern East Kazakhstan region" Almaz-Antey ") for the supply of more than 20 sets of digital radio relay stations R-416GM for operational and strategic command and control of troops, during 2022-2023 s.

With a number of companies' contracts were signed for the supply of the troops guided and unguided weapons for drones. "

......
- Contract with JSC "Zelenodolsk Plant named after A. M. Gorky" for the construction of two medium reconnaissance ships (presumably based on the hull of a small sea tanker of project 03182)...

Reconnaissance ships? Interesting, how would that go?

Would this mean spy ships?

This is original project for reference: 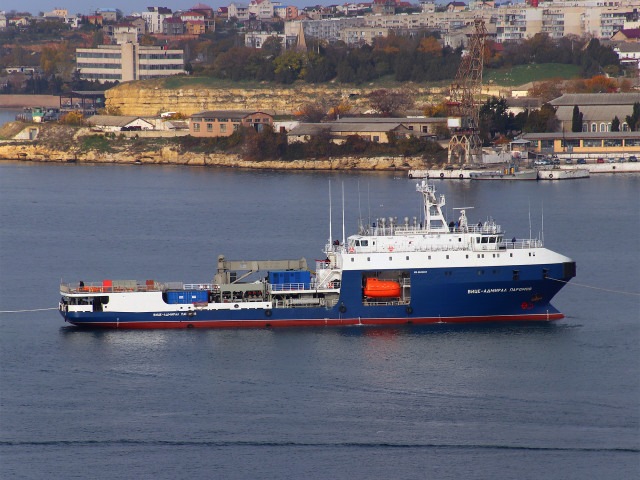 ......
- Contract with JSC "Zelenodolsk Plant named after A. M. Gorky" for the construction of two medium reconnaissance ships (presumably based on the hull of a small sea tanker of project 03182)...

Reconnaissance ships? Interesting, how would that go?

Would this mean spy ships?

This is original project for reference:

They are spy ships or Intelligence ones. Mostly used for Sigint with some Elint or signal intel and electronic intel if you are not familiar with the terms. Most of the present are from the '80's. There are two new ones built and about 15 older ones that will need replacing.
PapaDragon


MOSCOW, September 10. / TASS /. More than 9 thousand units of armored vehicles and vehicles are included in the procurement and repair plan of the Ministry of Defense of the Russian Federation in 2020-2022. This was announced in an interview with the Krasnaya Zvezda newspaper by the acting head of the Main Armored Directorate of the Ministry of Defense, Major General Alexander Shestakov.

"In the period from 2020 to 2022, the Main Armored Directorate of the Ministry of Defense of the Russian Federation has planned the purchase and repair of more than 9 thousand units of armored weapons and automotive equipment. This will allow maintaining the availability of armored weapons and equipment at 100% in 2022," Shestakov said. ...

According to him, the development of armored vehicles on the Armata platform is planned to be completed in 2022. "Russian designers are developing a new generation tank simultaneously with the re-equipment of the existing armored fleet with the latest vehicles. In 2022, it is planned to complete the development of a promising family of armored weapons and equipment - a tank, an infantry fighting vehicle [infantry fighting vehicle] and an ARV [armored recovery vehicle] on the latest the Armata platform, Shestakov added.