KNAAPO release nice pictures of new Su-35 planes. I personally more like traditional two tone blue color, but even gray one is not that bad.
Werewolf

KNAAPO release nice pictures of new Su-35 planes. I personally more like traditional two tone blue color, but even gray one is not that bad.

KNAAPO release nice pictures of new Su-35 planes. I personally more like traditional two tone blue color, but even gray one is not that bad.

medo wrote:...I personally more like traditional two tone blue color, but even gray one is not that bad.

The 902 prototype cammo is the best. Whoever decided on the new cammo must be colour blind...at least this one is OK compared to the Su-34 & Su-25

How many Su-35s are going to be delivered by end of this year?
Viktor

George1 wrote:How many Su-35s are going to be delivered by end of this year?

I think 3 more if Im not mistaken.

did we had 2 delivered last year?? i haven't read it anywhere
medo

Is there some document or newsbit published by the manufacturer of radar, the plane or the end user (RuAF) concerning the presence of L-band radar on serial su-35? Ever since the presentation of that radar the news about it kind of dwindled. Any official news about it?
Sancho

Hi, the knaapo booklet of the Su 35 shows, that it can carry 4 x RVV-AE at the centerline hardpoints, while all other Flankers so far only carried 2. It most likely should be twin pylons, but was such a configuration tested yet?
GarryB

With development of the PAK FA, they will likely have further changed the rear grid fins to fold forward for internal stowage, which they were originally designed for. With their rear grid fins folded forward they are much more compact weapons and twin rails between the standard Flanker body should be fairly straight forward to impliment.

Note the R-33 and R-37M use a similar system to throw them down and clear of the belly of the Mig-31 for a clean separation at launch too, so the RVV-BD will likely have a similar launch capacity... including from the centreline of Mig-29s and Flankers too.

The acceptance documents were signed by Defense Ministry officials at the Komsomolsk-on-Amur aircraft manufacturing plant in Russia’s Far East.

“The Sukhoi holding has fulfilled its obligations on the delivery of this type of aircraft under the 2012 state defense order,” the company said in a statement.

“The fighter jets will fly to their designated home base in the near future,” the statement said.

The aircraft has been touted as "4++ generation using fifth-generation technology."

The Russian Defense Ministry is planning to buy about 90 Su-35s, which will gradually become the core of Russia’s fighter jet fleet.

I thing Navy has fallen behind something but that too will it to will in a matter of few years consolidate its production in timely manner. 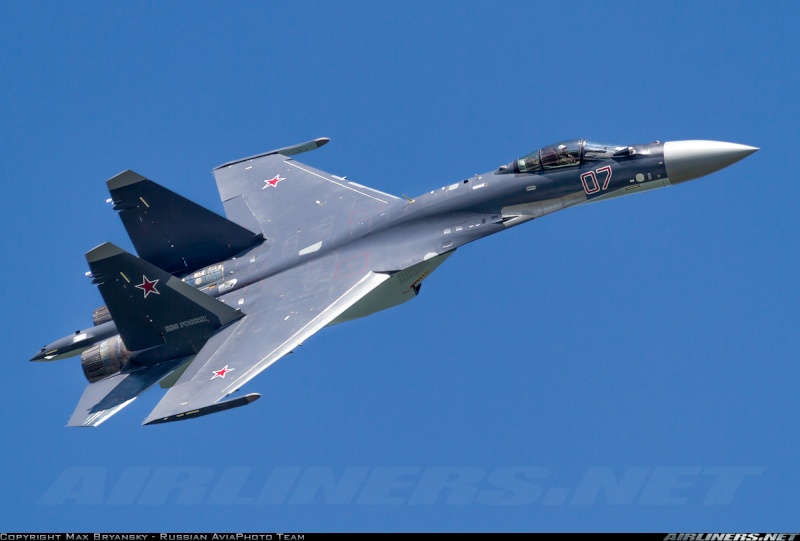 Flying of the Flanker-E!These are the first photos of serial Su-35S in the new standard of painting of the Air Forces of Russia.
Cyberspec

Interesting commentary on the Su-35S

Are there to be no deliveries of SU 35 in 2013 ? I have read that the program has encountered delays.
sepheronx

So far, no. Surprising since the Su-35 is so promising. But who knows whats going on.
Viktor

Rumors appear because there is no deliveries but there are no rumors because of deleys. Anyway 2013 year is still on.
medo

We see Su-35 in production in KNAAPO from previous reports and some were already painted. Maybe they wait for Christmas that Santa deliver them.
TR1

We will see deliveries either by New Years, or one-two months after. Not a serious delay, but I imagine it had something to do with the flooding.
mack8

Where will the first SU 35 operational units be stationed ?
Sponsored content