As noted by the company, the RSUO weapon management system for the Su-35 aircraft has "special-purpose" hardware to identify the types of weapons aboard the aircraft and control their employment. The Irbis-E radar-control system for all exportable Su-35s will provide detection, tracking, and co-ordinate measurement of air, land, and sea targets during the day and at night, as well as in all weather conditions. It can also function in jamming environments. Other Su-35 systems being promoted included electronic countermeasures and flare-dispensing, and Hands-On Throttle and Stick (HOTAS) functionality. It is likely that all of these systems will equip the 24 Su-35 fighters that Russia agreed in 2015 to supply to China.

KRET also showcased its OEPrNK-30SM EO sighting and navigation system as part of the Su-30-series avionics. It includes systems for flight and navigation, optical location, helmet-mounted targeting, weapons control, and information displays, as well as an onboard digital computer. OEPrNK-30SM works with the aircraft's radar sighting system to direct precision weapons to the target using heat-seeking and laser rangefinder capabilities.

The BINS-SP2 INS is designed to simultaneously generate and display autonomous inertial, hybrid, and satellite data via separate channels, and can function via the GPS or GLONASS systems. BINS-SP2 enables fighter aircraft to navigate in the absence of satellite, land-based, or offshore navigation systems. 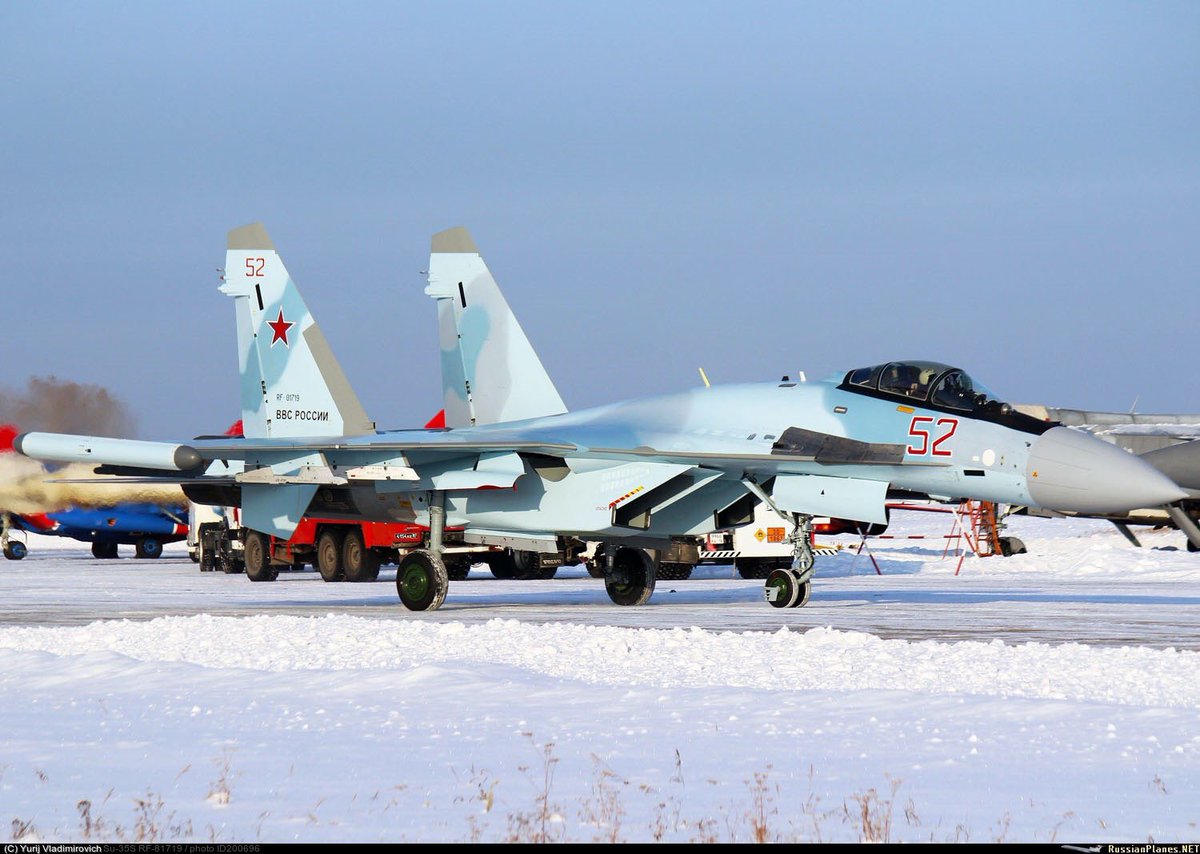 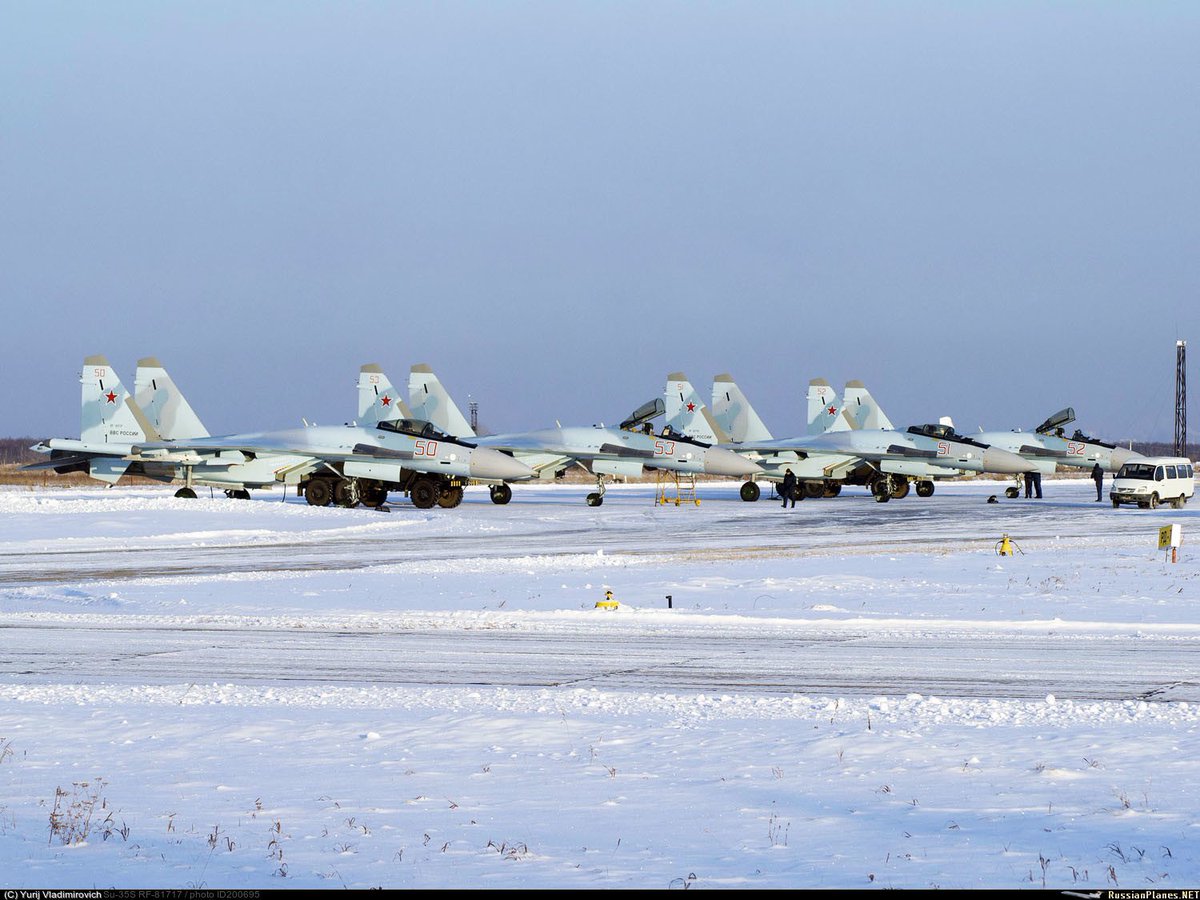 Pics are not visible Zg, here are the RP.net ones: 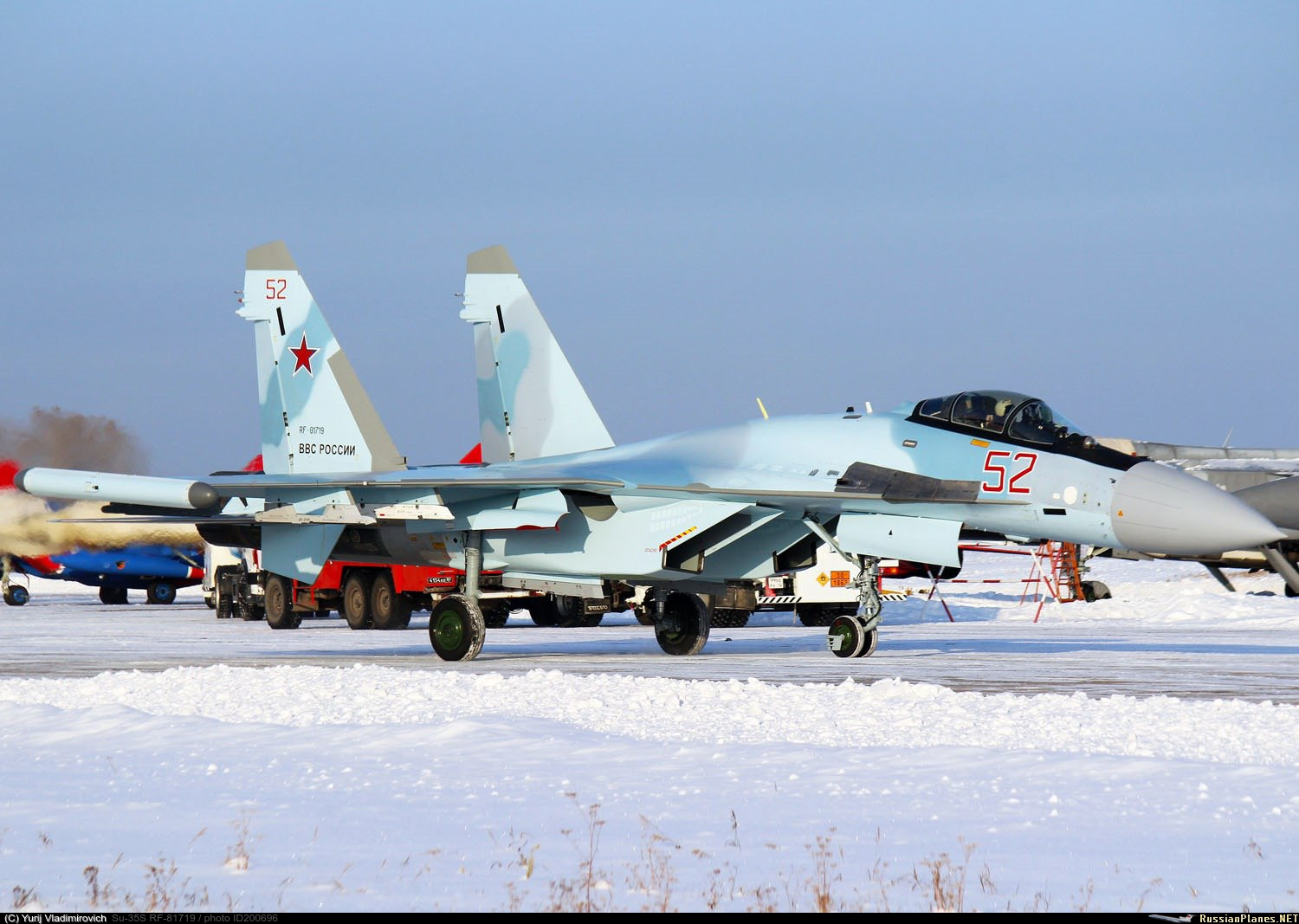 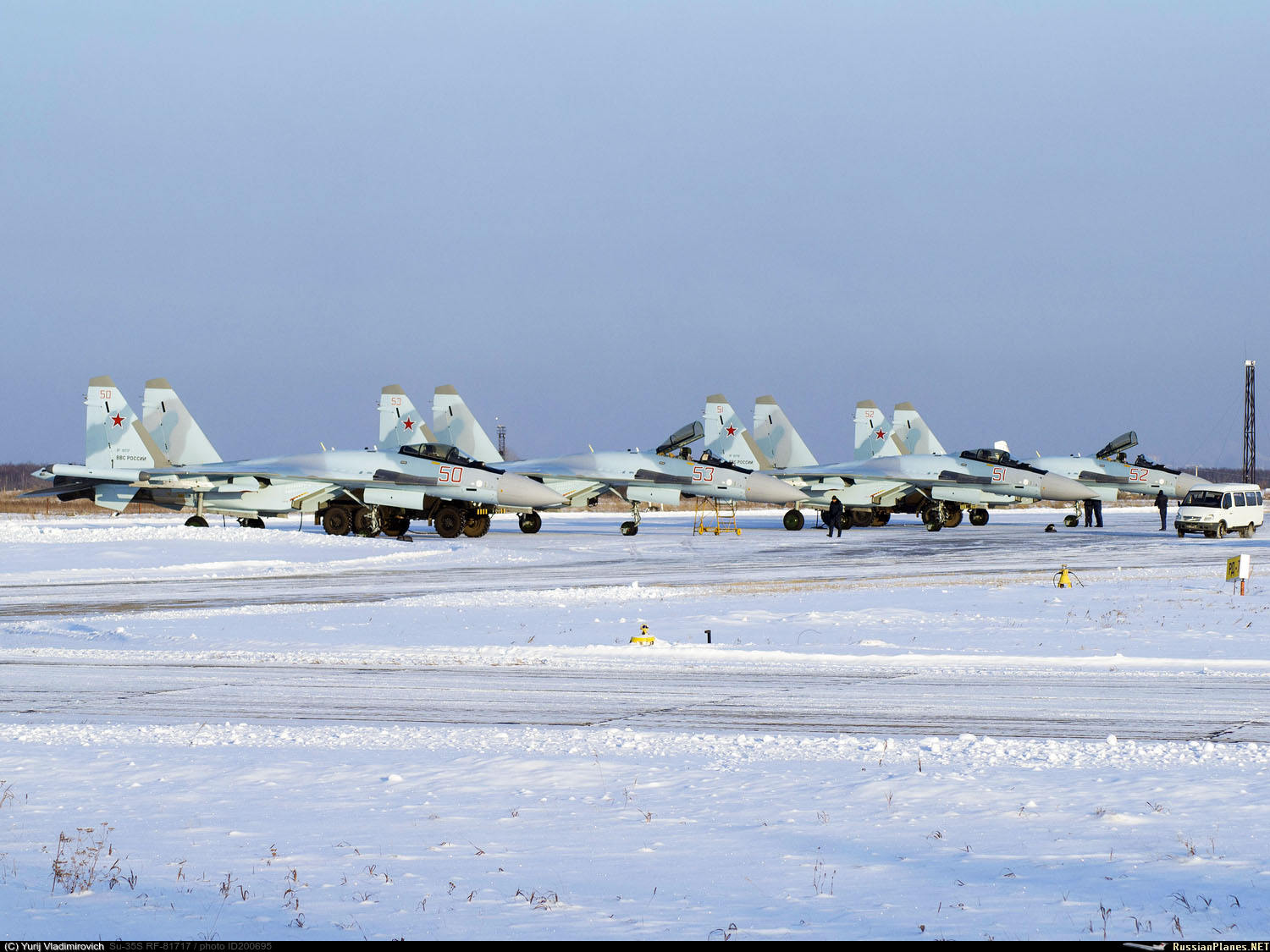 Apparently Besovets will be the home of the 4th and 5th squadrons of the Su-35S to be formed. The first two are based in Dzemgi and the third in Uglovaya.
mack8

Seem to be there is a new antenna on Su-35s spine that is black and located between the atenna of radiocompass and atenna of S-108 data-link. Is that one for new installed "transfer" network system on Su-35s and Su-27SM3? 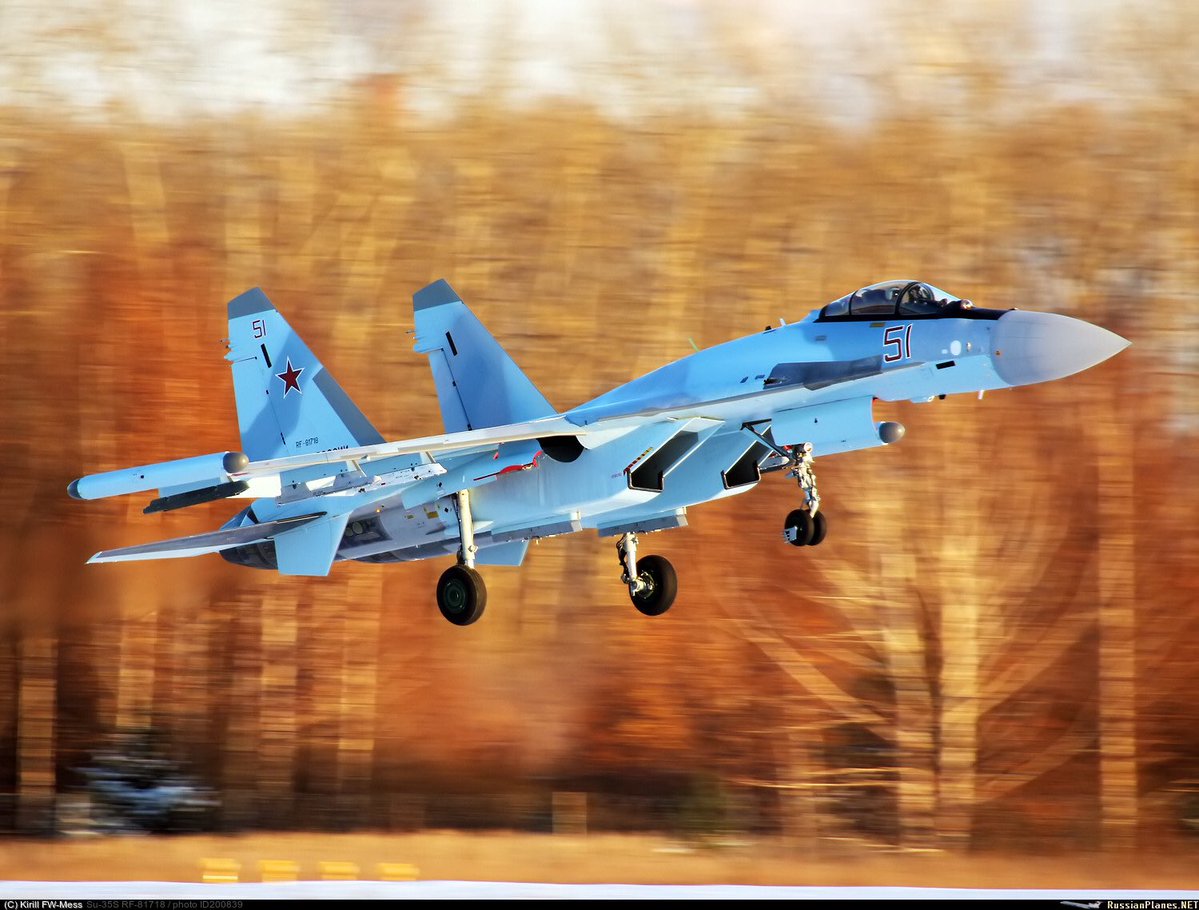 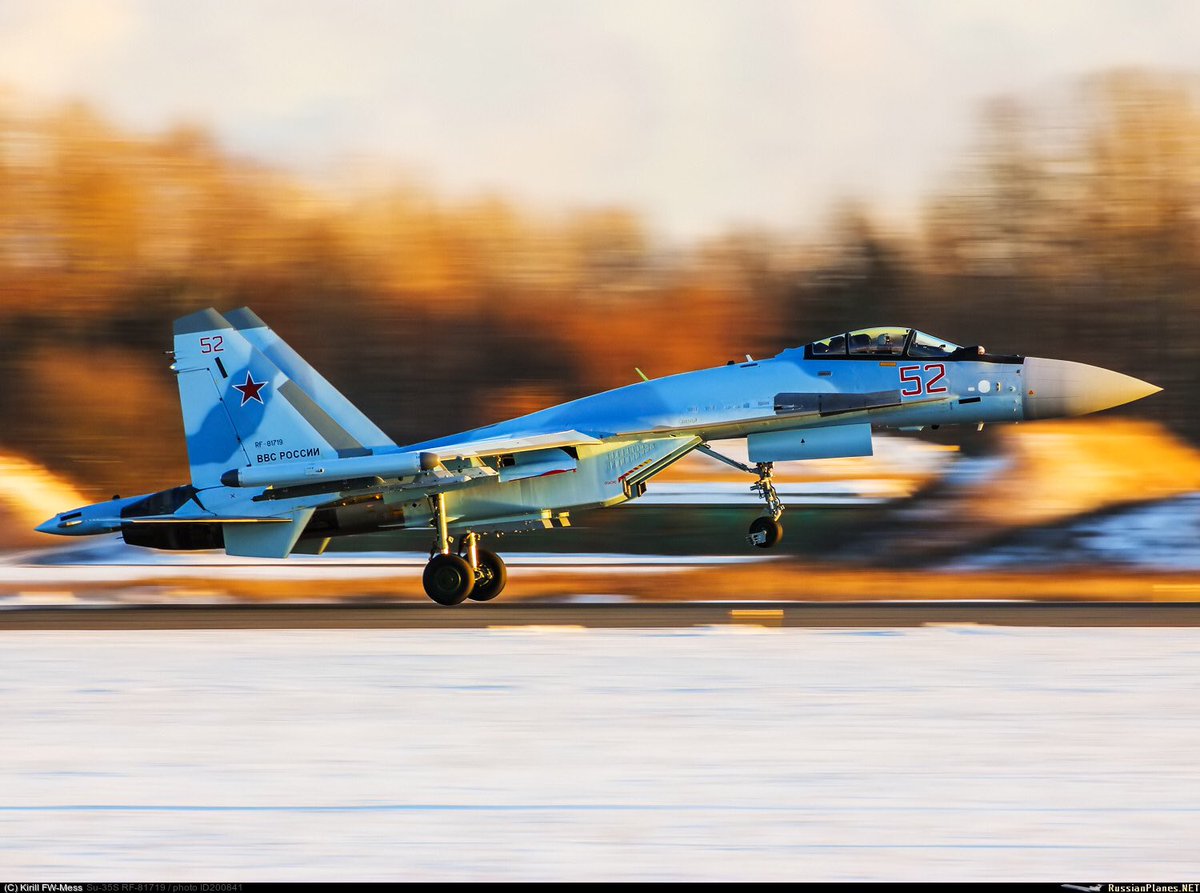 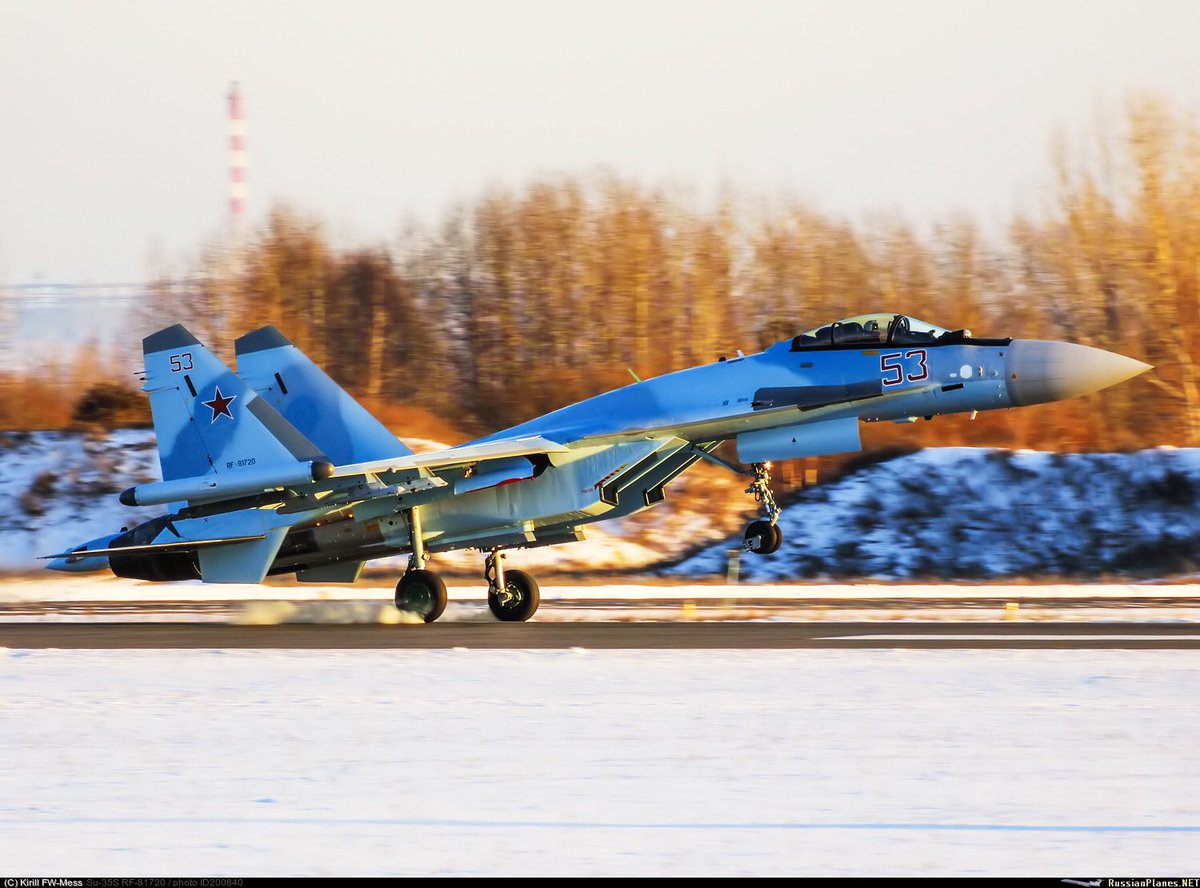 4 Su-35S arrived at Besovets with red hull numbers "54", "55", "56" and "57" of new construction of Komsomolsk-on-Amur aviation plant. it was reported that on December 1, from Komsomolsk-on-Amur flew 6 new Su-35S with red hull numbers from "54" to "59", have committed, in particular, the intermediate landing in Novosibirsk and Perm, but the planes with on-board numbers "58" and "59" it is reported that they will arrive in Besovets later than the end of year.

The first four fighters made under the contract with the red hull numbers from "50" to "53", were handed over to Russian Air Force in early November 2016, and, although the aircraft, apparently, are formal part of the 159 th Regiment, they proceeded directly from the factory in the Russian aviation group in Syria, arrived at the Syrian airbase Hmeymim on November 21st.

So 8 in total delivered for 2016. 2 more expected before the end of the year. 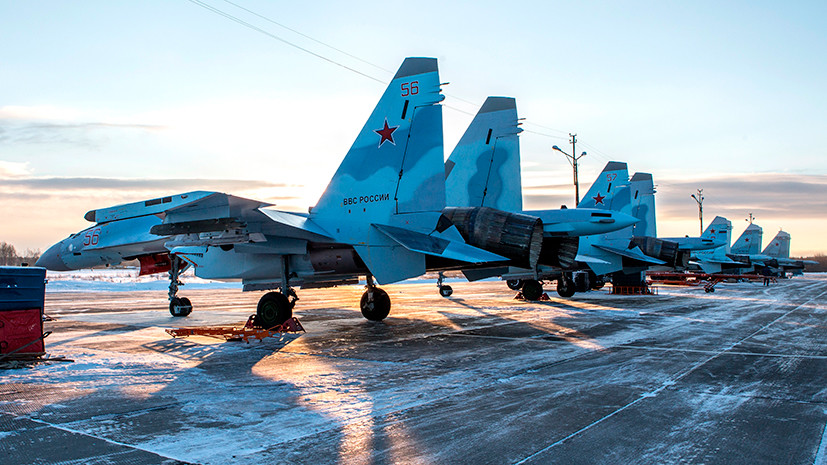 That is interesting why send four new 35's to Syria the base already is well stocked on aircraft. Are they preparing for some massive bombing campaign or seeking to expand their ability.

That is interesting why send four new 35's to Syria the base already is well stocked on aircraft. Are they preparing for some massive bombing campaign or seeking to expand their ability.

The four there came back home. It was a switch out.

I am pretty sure they will want to test fixes and new weapons and systems and tactics, so swapping aircraft in and out makes sense.

Do we have evidence of the 35s dropping ordnance over Syria? Pics?

Do we need evidence of such?

There were reports from their first deployment in Syria that there were some issues needing fixing with the Su-35... I rather suspect it had nothing to do with weapons use and were probably operational issues. Solutions for such issues need to be tested to ensure the solution does fix the problems and does not inadvertently create others.

The EW equipment on the Su-35 could be getting tested in proximity with the air forces of several hostile nations in the region without anything that could be photographed being used.

Indonesia still negotiating for the Sukhois but can't seem to come to agreement just yet for the cost and terms of financing.
George1

The first four Su-35s came back from Syria

This Binkov retard is at it again making an outlandish scenario where F-35s destroy anything using BVR and stealth.

youtube experts aren't experts. So why bother with them? The guy is clearly incompetent and retarded. So what?
Guest

Werent some of you people few weeks back praising one of his videos?

dunno. It wasn't me. I recall someone saying his accent is fake and cant read the language.

Outside of that, if anyone gets their knowledge from youtube videos some no-name idiot makes, shouldn't be given rights to procreate.
Guest

miketheterrible wrote:dunno.  It wasn't me.  I recall someone saying his accent is fake and cant read the language.

Outside of that, if anyone gets their knowledge from youtube videos some no-name idiot makes, shouldn't be given rights to procreate.

So that just furthers prove my point. Who gives a shit what a Croat thinks regarding Su-35 and F-35?
KomissarBojanchev

I dunno, perhaps because he portrays himself as a completely unbiased and some kind of well read expert and many people are mislead? I just wanted to show some dumb crap that we can laugh at.

KomissarBojanchev wrote:I dunno, perhaps because he portrays himself as a completely unbiased and some kind of well read expert and many people are mislead? I just wanted to show some dumb crap that we can laugh at.

If i told you I was the most unbiased person on this forums with two hot wives a shlong as big as a baby's arm and currently serving as a engineer for Russian aerospace while living in Canada, are you going to believe me?

If so, I got a bridge to sell you.

Lets be real here.  How does some fat kid who cant even speak Russian but pretends to be and then makes these god aweful video's to educate people when the only kind of people he educates and he is conforming to are idiots who have no idea how physics works, let alone how IADS or even Russian passive systems work?  His first mistake is thinking the F-35 is actually stealth.  But let me just let you sink this knowledge in - Youtubers are known to be losers and retards as well as horrifically uninformed.  Just because 4chan K users are good at guns and rifles, when it comes to any other systems, especially not NATO standard, they are clueless.  I am clueless about NATO systems to be honest besides some gimmicky systems like F-35 and M1A1 tanks.  Outside of that, dunno.  But you wont see me making videos with some stupid looking frog puppet and trying to be funny and informed when I am clearly not.

Good thing is, such bullshit is good for Russia.  An enemy that is ill-informed is ill prepared to deal with the enemy and gives advantage to the Russians.  But I doubt anyone with any form of knowledge in the military industrial complex or even higher chain even watches these videos.  Wasted effort and time where the guy should be instead screwing woman and doing something else with his life.  Technically, that goes for the rest of us.
Isos

His datas about aircrafts are his drawings hahahahhahha

Hey guys i have some questions about the SU-35S

, so when you go and check the internet experts in f16.net you can see all shapes and colors of insults towards the su35s , they say its radar is outdated its systems are 20 years behind etc etc , there are many people like this notably a guy called hornetfinn .
Now the thing  i want to know is  what is so bad about it? Its radar seems to outrange any US fighter radar we have some data about ,  whats so bad about it to be called ''sub standard" as they do? this goes for the rest of the systems such as its RWR . The networking capabilities of the SU35s is also a target for their critics  , calling them ''basic limited networking" .Whats even weirder is that none of them really gives an argument to support the claims , apart from the ol' reliable ''russia is 20 years behind" .
can someone please  explain from where those rediculous claims are emerging?
Sponsored content