".... Maybe they will order some such ships from Russia. They can then just put mobile launchers on them like on this one......"

Good idea, to buy good second hand freight ships, not order new ones. And convert them.  At fraction of cost of building specialist vessel or buy it. This way a fleet of tens or a hundred can be built up real quick.


"..... Not as effective as a real warship but it can carry quite a powerful stock of weapon to deal with lonely ships........"


Not if you have numerical superiority. And this can be achieved by converting existing ships. And how many ships do you know that can launch mini- Subs? Maybe 4 to 6 of them? Extend range of mini-subs, to cover choke points like Bab-el- Mandab or coast of South Africa to Antarctic? The subs can sit and listen for weeks , and get picked up later.

Iran needs to develop tech in all areas. Ability to build all equipment. Once technical knowhow achieved, then with Russia and China, all contracts can go to tender. The one with lower cost and good quality, gets picked. In open fair market. So it could be that a product gets built in three different places. A little like Euro fighter project.
George1

BEIRUT, LEBANON (7:45 P.M.) – The 71st flotilla of the Iranian Navy set off for high seas to safeguard maritime routes used by Iranian vessels in international waters, specially in the Gulf of Aden.

Meanwhile, the 70th fleet of warships of the Iranian Navy returned to Bandar Abbas in southern Iran after completing its mission in free waters.

Iranian Navy’s 70th flotilla of warships, comprising of Sablan destroyer and Lavan logistic-combat warship, was welcomed by Commander of the Navy’s first zone Admiral Jafar Tazakkor in a ceremony in Bandar Abbas.

The 70th flotilla of the Navy returned to the country after days of sailing and fulfilling missions and establishment of security for the Iranian cargo ships in the Gulf of Aden and Bab al-Mandab Strait.

Addressing the ceremony, Admiral Tazakkor said that monitoring and identification of foreign vessels in the international waters along with safeguarding Iran’s interests are among the important responsibilities of the Iranian fleets of warships.

“We will not compromise our interests and are not joking with any foreign country and force in the region and outside the region. The security of our interests is our redline,” he underlined.

In recent years, Iran’s naval forces have increased their presence in high seas to secure naval routes and protect merchant vessels and oil tankers against pirates.

In line with international efforts to combat piracy, the Iranian Navy has also been conducting anti-piracy patrols in the Gulf of Aden to safeguard the vessels involved in maritime trade, specially the ships and oil tankers owned or leased by Iran. 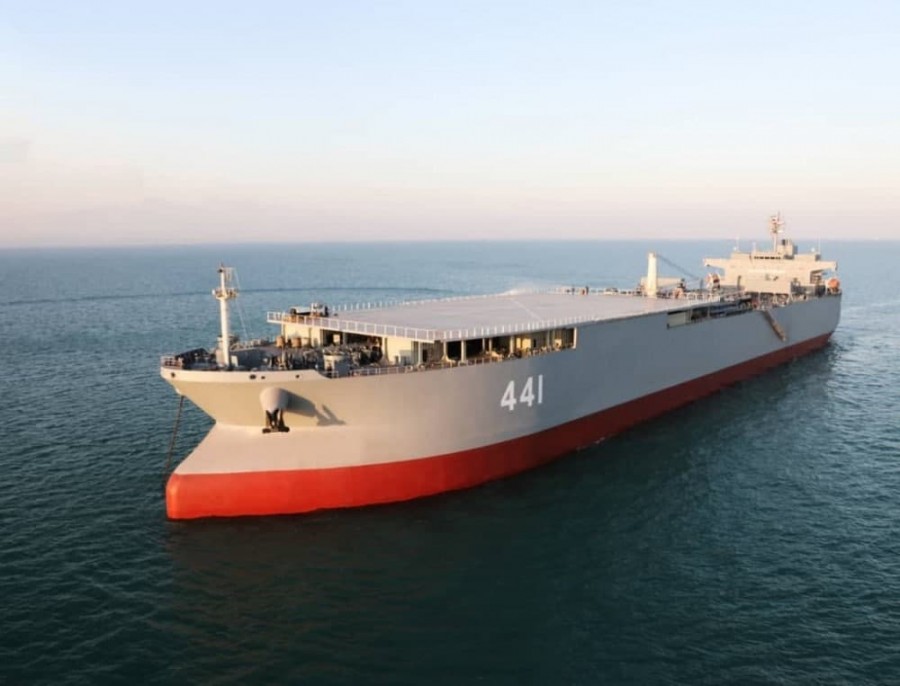 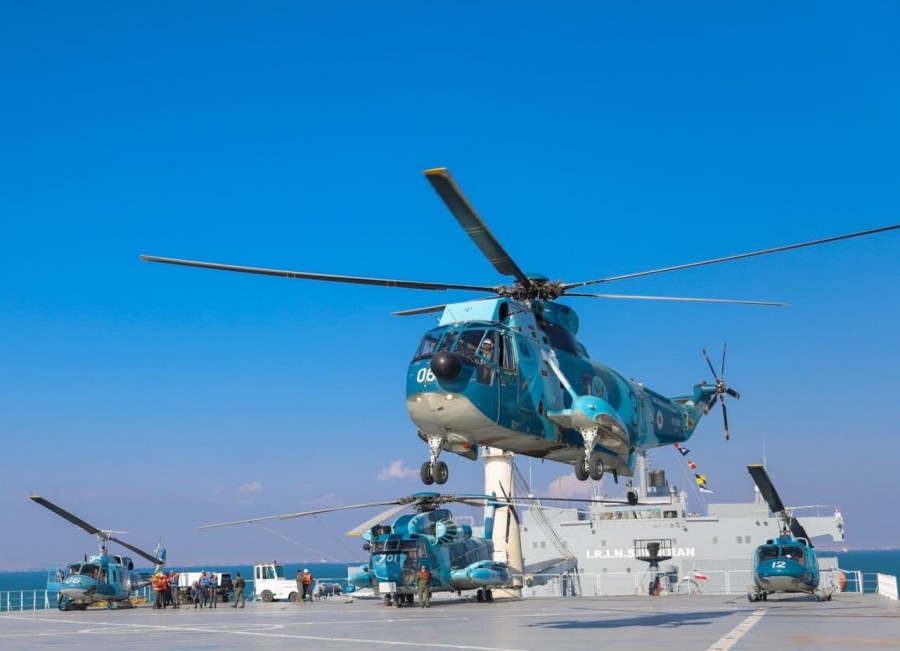 Would be interesting... the main rotor on a helicopter is generally its centre of gravity and the source of the force that lifts the whole vehicle, so in theory you could put a lifting ring on the top of the central point of the main rotor which you could use a cable and hook and crane to lift the helicopter using a crane.

That would mean you could fit a large crane on this ship and lift helicopters off the deck and put in on the rear part of the ship... perhaps with main rotors folded for compact storage of lots of helicopters and drones, or to access a workshop for repairs or maintenance, or to just operate with a lot more helicopters without needing aircraft lifts.

You could also use the crane to lift material off ships coming along side including munitions or food or parts or anything at all.

It might even be possible to carry something like TOR that could be lifted out on to the deck for self defence... or on the rear of the ship where they could operate too.
Tsavo Lion

IRGC navy missiles in an underground base. At least 200 of them but they are Nasr-1 with only 35 km range.

The Iranian Navy strategy write large, offense in numbers. A bit of fake stone on top and these could be camouflaged as tipper trucks.

Isos wrote:IRGC navy missiles in an underground base. At least 200 of them but they are Nasr-1 with only 35 km range.

love the fire extinguisher on the wall, would surely help if those lads were popping off

They aren't stupid to stock all the missiles at the same place. So if they stock this many at one place then their total number is huge. They probably have hundreds of storages like this.
nomadski

The main threat is USA, not regional states. And a conventional symmetric war, will be won by them, as they have the much bigger economy. Only a non-conventional arsenal will safeguard Iran. Needing only a limited number of launch platforms, ship and Subs or blue water navy. Here are a couple of Oceon going new ships.

At the main Iranian naval base in the port of Bandar Abbas, which is located in the Strait of Hormuz, a solemn ceremony was held to include the light frigate Dena (hull number 75) and the minesweeper Shahin (hull number M111) into the Iranian Army. Light frigate Dena with a displacement of 1,500 tons is the fourth ship of the Mowj project built in Iran, after Jamaran, Damavand and Sahand. Since the construction of ships of this project has been pretty delayed since the 2000s. (according to rumors, due to the problems that have arisen with the need for import substitution of certain components due to sanctions, etc.), the ships of this project are built with some noticeable differences from each other, while the main armament as a whole remains the same. Dena, like its predecessors, carries four launchers of anti-ship missiles Noor or Ghader, 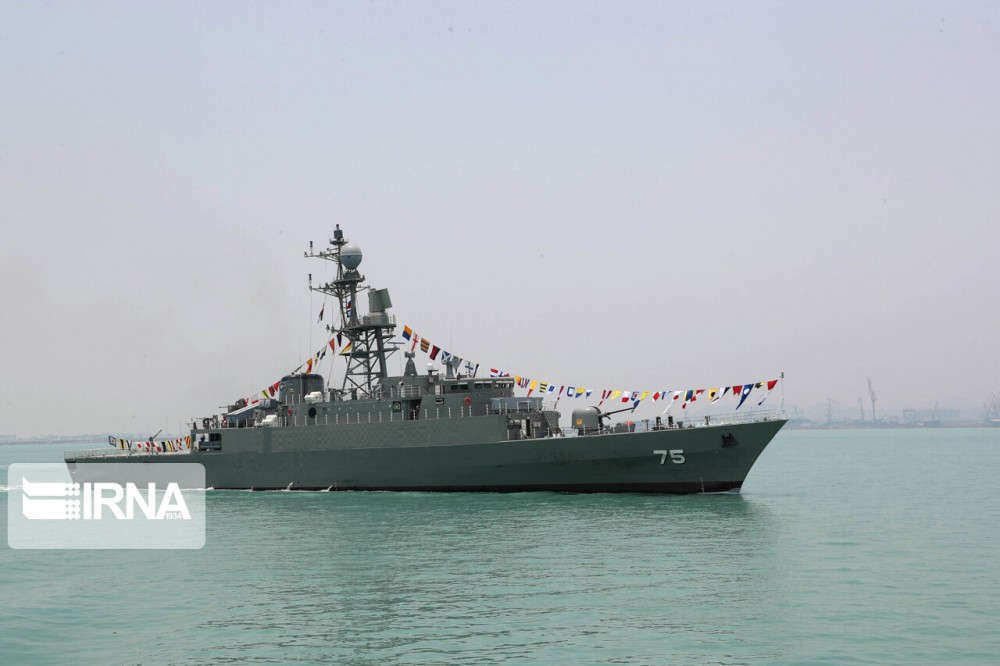 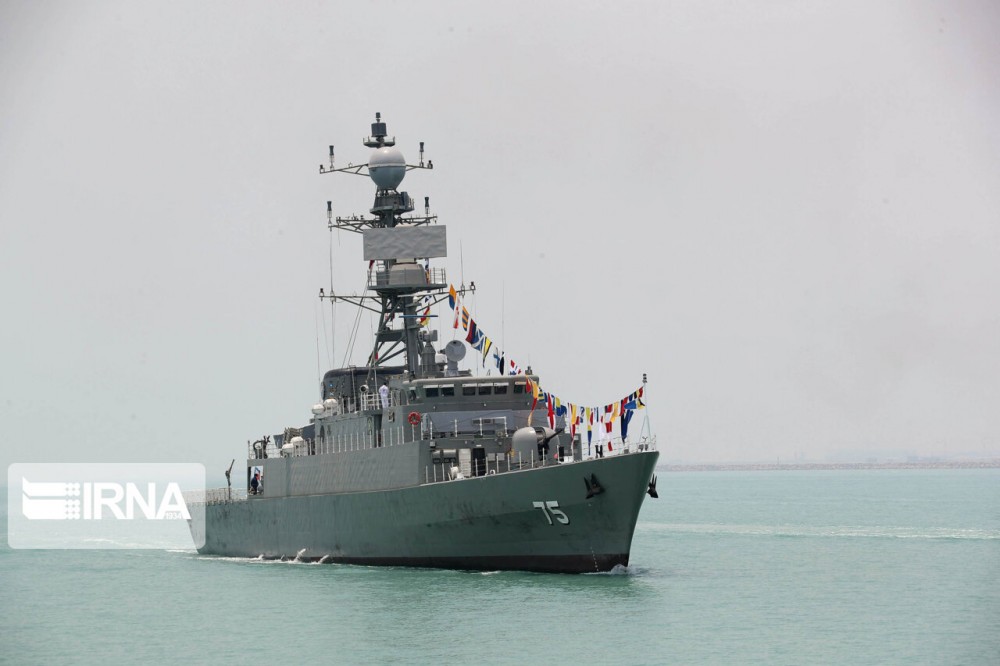 Couldn't find the earlier posts on this expedition but after traveling round the Cape of Good Hope and causing a ruckus with the US about possibly going to Venezuela, they now look like they have passed the 'quick' trip home and are heading towards the Chanel. Expect all kinds of ruckus for public consumption as the Royal Navy, or at least what's left of it in home waters, is scrambled to defend the UK

Guesses please on their destination.

Mine is St Petersburg.

Now cruising up the Channel. In plenty of time for Navy Day in St Petersburg 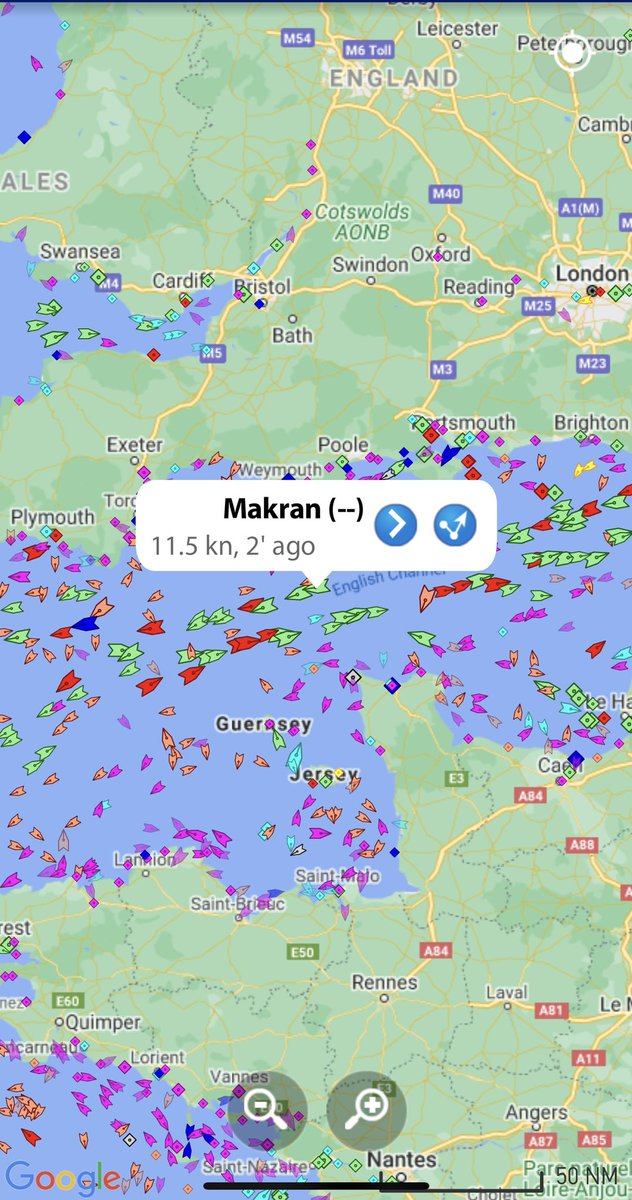 Are there any British Navy ships available to provide escort?
JohninMK

Clearly not. As that was much too embarrassing for the Royal Navy there was nothing in our papers or TV about ships from evil Iran only 12 miles off Dover either.

Meanwhile they have now passed into the Baltic. Denmark still has ships left locally to protect the country

They are picking fights in the Black Sea to assert their ignorance of historical events, but don't have enough ships to defend their own waters...

Not really a global naval power any more are they?
JohninMK

Note the location, in waters that the US would regard as theirs

Safely home after their trip to St Petersburg. Not Venezuela

Mehdi H.
@mhmiranusa
·
9 Sep
Video of IRINS Makran and IRIS Sahand back home near Jask port after a 133 days mission and passing 44000 km.

The vessel is named in honor of Nader Mahdavi. He was one of 7 IRGC personnel killed in an engagement against the U.S. Navy in October 1987.

According to defense analyst Aurora Intel, the ship is Savin (IMO 9209348). This Iranian flagged container ship was previously Dandle. She was built in 2000 and is 240.2 meters overall, and 32.2 meters across. Based on imagery analysis it appears that she had been outside the naval base at Bandar Abbas, in the civilian anchorage, since mid-2019. It had been in its final spot since March 2021. Based on analysis of satellite imagery, the ship was brought to the shipyard in late January 2022. Work likely commenced soon after.

The refit is being done at the same yard where the regular Iranian Navy's own forward base ship, I.R.I.N.S. Makran (441), was converted. At 240 meters long the new IRGC ship appears to be similar lenght but slightly smaller overall than the Makran, which was a tanker. But it will be by far the largest ship in IRGC service.

The IRGC already has three forward base ships. The I.R.I.S. Shahid-Roudaki is the smallest at 150m length. The other two are more covert, the Saviz and Behshad, and are used as base ships in the Red Sea. Behshad replaced Saviz there after the latter was mined in 2021.
http://www.hisutton.com/Iran-IRGC-Shahid-Mahdavi.html

This time, however, Iran should put an Aesa radar on it, TORM1 (Home Productions?) Systems and for the helicops also elevators to wait for it in the hangar. A refueling for the small destroyers as accompanying protection should also be included this time, hopefully!
yavar

As far as can be judged, the missile armament of the Shahid Soleimani-class IRGC Navy catamarans consists of six cruise missiles placed in inclined launchers on the sides of the vessel, as well as vertical launch cells for short-range and medium-range anti-aircraft missiles located in the central part of the superstructure behind the wheelhouse. As the Chief of the General Staff of the Iranian Armed Forces, General Bagheri, said today during the commissioning ceremony of the ship:

As for the artillery armament, it seems to consist of an artillery mount with one 30mm cannon, as well as 4x 20mm cannons. 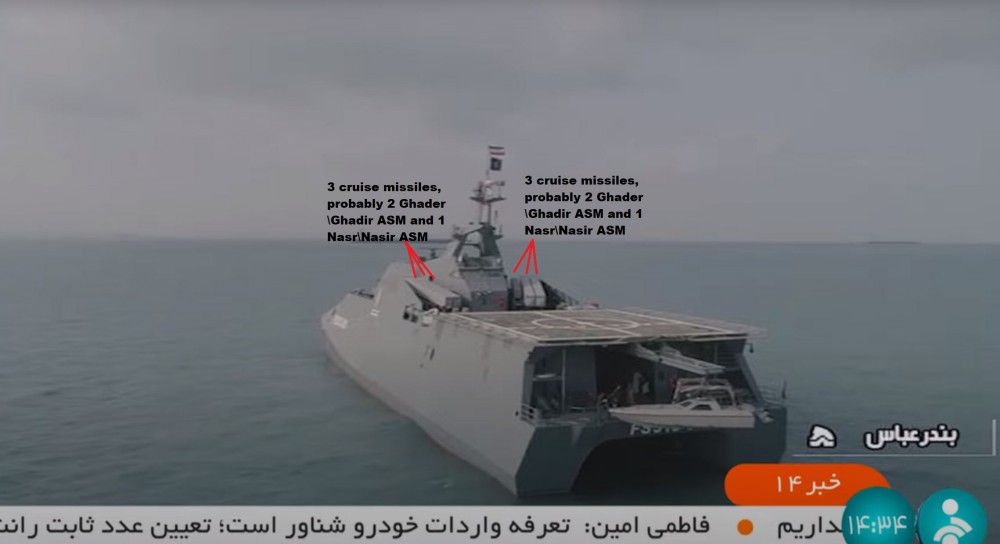 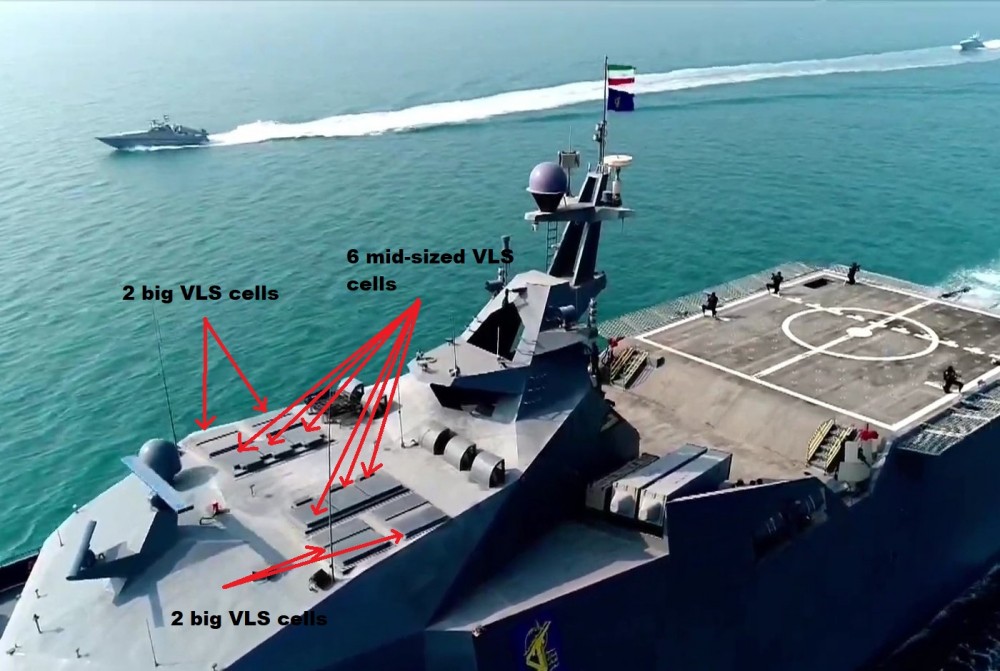 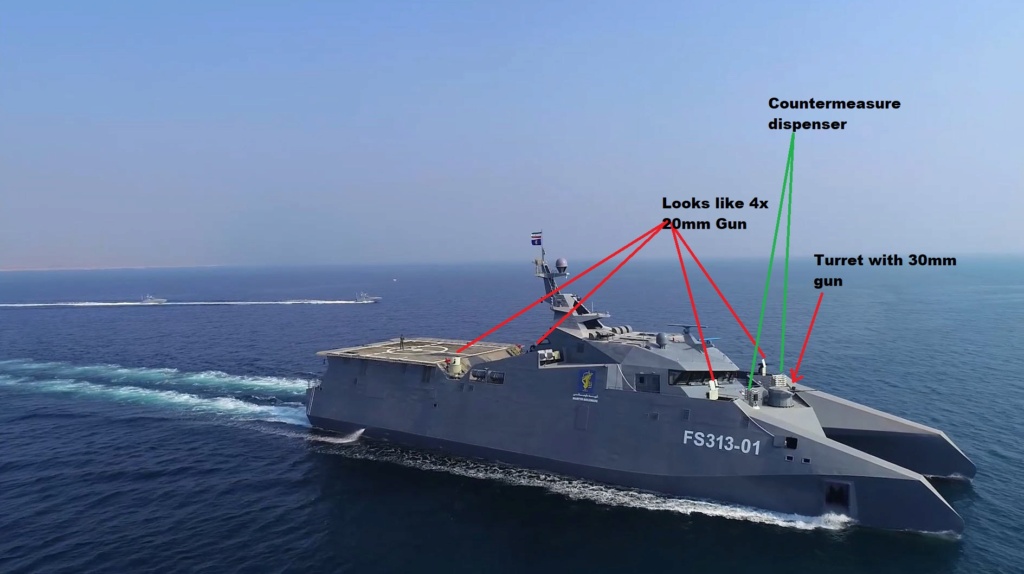 It has no radar and no real AD system. It will go to the bottom as fast as Iraqi missile boats when US invaded Iraq.

Isos wrote:It has no radar and no real AD system. It will go to the bottom as fast as Iraqi missile boats when US invaded Iraq.

Wow whoever did this was wrong...

On the front deck the VLS systems marked 6 midsized VLS cells... they look as big as UKSK, but yes they appear to be each a block of three tube cells, but the outer set of "cells"  if I had to guess the size and shape of them I would guess they could be land based TOR sized VLS, so old model each "lid" is four TOR missiles from the 1980s, which is 8 lids for 32 missiles, but I would think in this day and age it could be the modern TOR sized missiles with 8 missiles under each lid and therefore 64 missiles ready to fire.

If the big tubes are UKSK sized that means the depth there is 8-10m so plenty of room for TOR sized missiles beside them that don't reach down so far freeing up internal space to move through the vessel at the lower decks.

Here is the current TOR... look at the shape of the VLS systems for two blocks of missiles ready to fire: 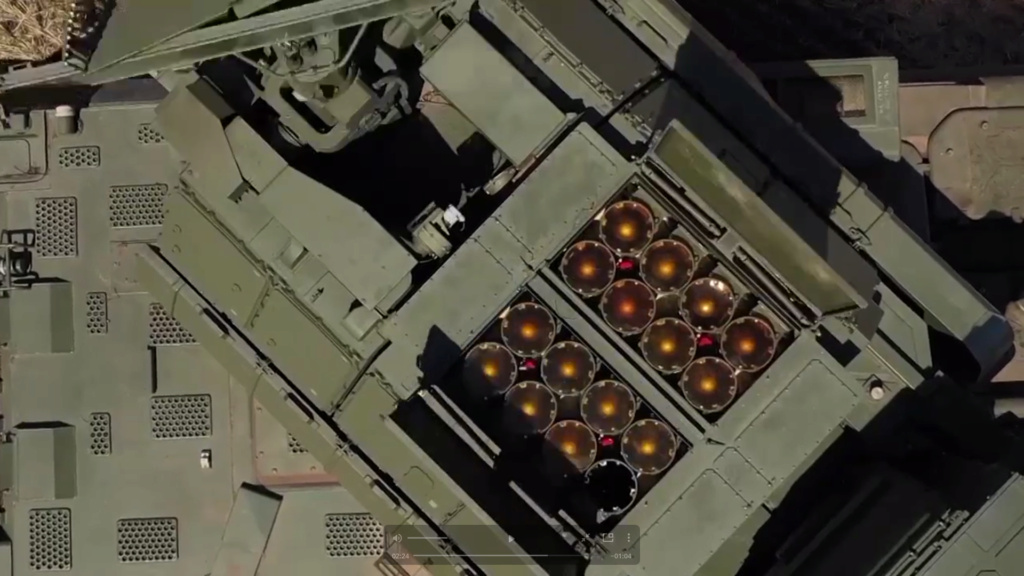 The two big missile launchers might carry large SAMs, (three tubes each for 6 missiles), but I would also guess to say that they might be 9M96 type missile cells which means each of those three hatches might have four missiles each... so 24 medium range SAMs,  but those smaller VLS systems will be short range air defence systems like TOR or something similar... that is the sort of thing I would love to see on new Russian ships.

(Obviously I am using 9M96 and TOR missiles as examples, they will have Iranian missiles I would expect...)