Language-wise they were closer - look at Old English grammar: https://en.wikipedia.org/wiki/Old_English_grammar#Morphology

Though I would not call 5th century Saxon tribes German - these tribes hated each other almost as much as they hated outsiders.
Werewolf

Though I would not call 5th century Saxon tribes German - these tribes hated each other almost as much as they hated outsiders.

Our german tribes hated each other despite being the exact same people. Hell i have colleges they already hate even someone mentions a non bavarian word like our Saxon, Oiwa Bübsch, he goes nuts when he hears that.

They are germanic in that timeline, nothing to dispute, but certainly never had warm feelings about other tribes.
Walther von Oldenburg

To add more - I would say post-1066 English culture has been closer to French culture than to any other Germanic culture.

Walther von Oldenburg wrote:To add more - I would say post-1066 English culture has been closer to French culture than to any other Germanic culture.

I very much doubt that.
Walther von Oldenburg

Ok, now I have some more time.

What are these hateful and genocidal teachings of Jesus? Because I see only one ambigous verse that mentions sword.

Imagine Muhammad is taken to court. What could he be accused of? Well... War crimes, crimes against humanity, genocide, murder (he personally decapitated at least one man), pedophilia, multiple robberies, corruption, torture... and so on so forth. On his trial he could sit alongside Himmler, Rosenberg or Eichmann and not feel worse than them even for a second.

Now imagine Jesus is taken to court. What could he be accused of? Because besides demolishing a few stalls there are hardly any charges that can be levied against him, from eiother legal or moral(!!!) perspective. An overzealous judge might criticize him for not condemning slavery (not a crime in itself) and maybe for hurting religious sensibilities of the Jews - and only if we extend the definition of religious sensibilities to an absurd level.
RTN

Every religion had a dark past and most of them have either reformed OR are making efforts to reform.

Unfortunately the same cannot be said about Islam primarily because it is being led by diabolical regimes like Saudi Arabia and UAE.
Walther von Oldenburg

Christianity never needed reform. There is nothing in the teachings of Jesus that justifies any of the crimes commited by Christians, including those committed in the name of Christianity. What was needed was reform of the Church and reform of secular law - that was already accomplished between 200 and 300 years ago.

KSA is guilty together with Iran. Of course Shias are a minority of Muslims so they need to pretend that they're the moderate ones - but the bulk of clergy in Iran is no more progressive or moderate than their Wahhabi counterparts in KSA.
GarryB

The dark ages in Europe were largely because of a conflict between science and christianity and related religions.

People don't give up power easily and the men that controlled the Churches of Europe held on as long as they could... blocking the alternatives of democracy and science.
Walther von Oldenburg

Nope! Middle Ages in Europe occured because of the collapse of Western Roman Empire and nearly complete disintegration of European economy - essentially a default to pre-Roman levels, even in Rome itself. There was never a conflict between science and religion. Numerous important inventions were made during that era - horse collar, heavy plough, tripartite crop rotation, tidal mill, mechanical clock, blast furnace, improved compass (improved upon it's Chinese predecessor), printing press of Gutenberg etc.

Popular historiography likes to portray the Renaissance as a revolution in thinking - in reality it was a natural, continuous development upon the High Middle Ages.

Garry - don't you think it's a good idea to merge this thread with my thread about religion?
Rodinazombie

I think i need to smoke something strong before reading this thread.
OminousSpudd

It was interesting earlier when people were comparing different prophecies... now it's turned into the infinite war of atheism vs. theism.  Oh well...
Walther von Oldenburg

How long can we talk about nonsensical prophecies?

"Prophecies" about Russia in the Quran, USA in the Bible, ww3 in Vedas and similar shit are just that - nonsensical. They're clumsy attempt to retrodict past events (they never predict anything) from obtuse passages created by illiterate folks who knew nothing about how the world works... let alone about GOd.
sepheronx

"Prophecies" about Russia in the Quran, USA in the Bible, ww3 in Vedas and similar shit are just that - nonsensical. They're clumsy attempt to retrodict past events (they never predict anything) from obtuse passages created by illiterate folks who knew nothing about how the world works... let alone about GOd.

And yet we still barely know our world. We are no different. But to say they are illiterate is just stupid. They had to write it in the first place so that contradicts the illiterate comment.

But yes, this is a ridiculous thread.
Walther von Oldenburg

Maybe I used the wrong word - I meant stories, not passages. I case of almost all "holy books" these stories are way older than people who wrote them down.

Do you know how the Old Testament came into existence Around 6th century BC a bunch of Jews were in exile in Babylon. A group of clerics among them (apparently led by Ezra) became impressed by the religion of their conquerors (Persians) and decided to turn their old polytheistic Levantine religion into a variant of Zoroastrianism. They wrote a book about their religion (later called the Old Testament) but kept enough of the old myths and legend to convince the Jews that their humble, sophisticated God is not a new entity but is avtually the same jealous, vengeful, bloodthirsty deity (YHWH) they'd worshipped all the way.
jhelb

Try weed, but then you might end up enjoying reality even more.
Werewolf

Try weed, but then you might end up enjoying reality even more.

If he smokes weed and tries to read this thread he mind end up with someone giving him 10 commendments to engrave in stone.
Khepesh

*Caution, sarcasm may be present*

Such curious arguments I see here predicated on the "religions of the book" actually being some sort of "truth". In the ancient world there were generally no prophecies in the sense we view such things now, only low level short term soothsaying designed to make the person paying for the "prophecy" feel good about themselves and that they got something for their money. From the prestigious Oracle of Delphi and Oracle of Amun at Siwa, and down to the lowliest street hustler under the arches of the Coliseum or around the temples of Karnak, all were charlatans preying on a basic human need for reassurance or simply wanting to know what will be. No magic, no "gods" involved, simply tricks both physical and mental. Prophecy as we regard it now is mostly an invention of the Hebrews, and neither while I, or anybody, can prove this directly, their history of being the lowliest and poorest tribe in the Levant, forever being bullied or being dragged on the coattails of other more successful and vigoros peoples, such as the Egyptians or Hyksos, has caused them to make up stories to sooth themselves, to tell themselves that tomorrow it will be better, or the next day or the day after, and on and on. It is a device born of despair. It is not surpring that when they, long after all other peoples around them, formed a proper nation and writing, that they would want to inflate themselves to cover their extremely humble origins as sheep herders and bandits. They borrowed the gods of their neighbors to add to their rather bloodthirsty thundergod "Yaweh", the borrowed elements of the history of their neighbors as their own. They, in their earliest writings, that date to so late in history that the "Dynastic period" of Egypt had all but ended after several thousand years, sought to vindicate themselves and make it seem they, and only they, were the "chosen ones". They were a joke back in the days and everybody knew it and despised them. Their religion by an accident of fate spawned Christianity and, with modifications, eventually Islam, and today we live in a world dominated by religions that are as fake as tits on a bull, and in fact it could be said, and was said, by the emperor Julian the "apostate", who had access to source material that is long destroyed, that Christianity was in fact atheism as they did not worship a god, but a mortal man. And for two thousand years in all of Europe from East to West we have been told, forced on pain of death, to believe in one "miracle of resurection" from one small sect, while being told to believe all other "miracles" are false. And with this new "religion", and with Islam hundreds of years later, came these "phrophecies", the Old Testament phrophets and in later years garbage such as Nostradamus. All of it a contrick, smoke and mirrors no different to the Oracle of Amun or the "thunder and lightning show" put on at the old pagan "mega temple" at Uppsala once every nine years. Here, I will make a "prophecy", some people will agree with this post, at least to an extent, and other will disagree, even to the extent of hating it. So, I am a "phrophet", easy, let's do another "phrophecy", tomorrow the Sun will rise in the East and set in the West, wow! a "miracle"

Well, that islamic country will be not Turkey.
DerWolf

Well, I have heared something similar about WW3, but this time from Bible point of view.
The Ottoman

And with the latest peace-talks between Turkey and Russia, this thread is living again!

Sultan Erdogan captured his brain again and will hopely point toward the right direction from now on!

according greek orthodox holly men prophecies there will be 2 "halftime" war. In the first Russia will win and reach until israel with their troops. In the second USA and Russia will clash in the ground of Turkey. No major power will win at last. Turkey will be demolished. Greece, Armenia and Kurds will take their parts
The Ottoman

Kazakhstan Gets Thanks for Russia-Turkey Rapprochement
Turkish leaders have thanked both Azerbaijan and Kazakhstan for helping bring the two states back together. 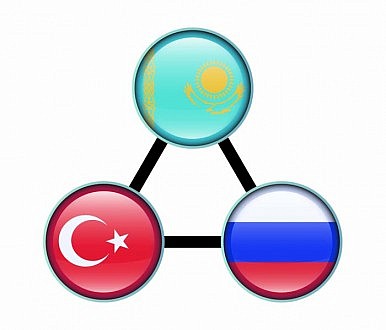 I have trouble trusting Erdogan, but I am much happier that relations between Russia and Turkey are looking better.

I think cooperation and trade and mutual respect is much better than anger and antagonism.

I wish the same for Russia and the US... but not on the terms the US seems to demand... ie everyone as her bitch...
The Ottoman

Is This New Alliance Between Russia, Turkey And Iran The Gog And Magog Alliance?